Last weekend Clare & I took a few day’s off for a winter break in Berlin! In spite of it being FREEZING we had an ace time roaming the streets, soaking in the great food, fascinating wartime & East/West history and gluvine! 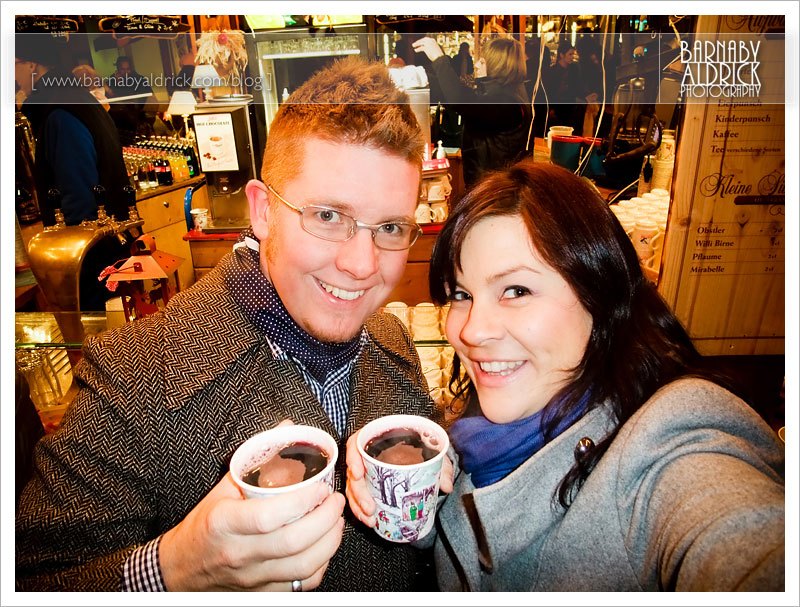 We flew in via the oft maligned but impressively cheap Ryanair, and caught the surprisingly confusing S-Bahn (suburban rail network) into town.  We changed onto the U-Bahn Subway and found ourselves on the U2 line, which actually had a Zoo Station!  I remember U2 recorded the groundbreaking Achtung Baby in Berlin in the 90’s and never pegged that the opening track was named after The Berlin Zoo station.

Unsurprisingly, this was more exciting got me than Clare. 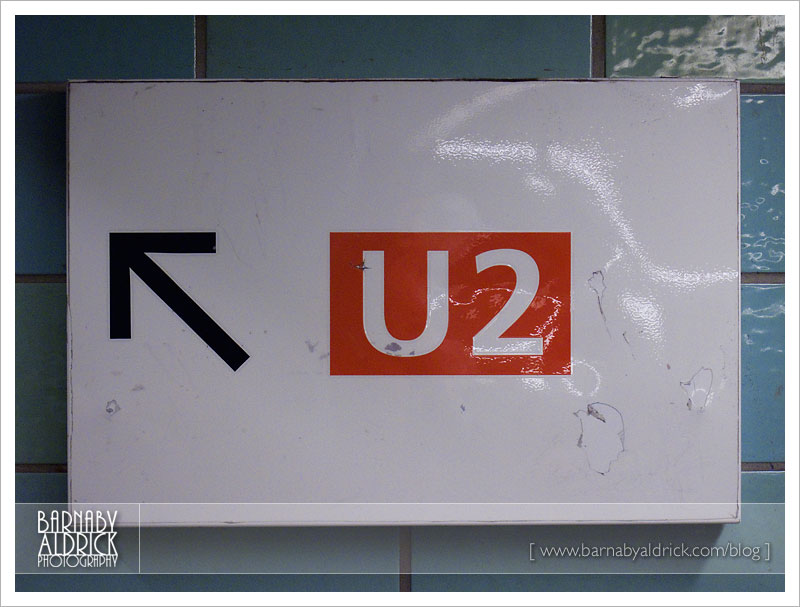 Day 1 we took an early trip up the Reichtag, the major Berlin town hall, which has a free trip up a newly built spiral dome on the roof offering mint views of the Berlin skyline. It was a lovely morning, but I thought the graphic lines inside offered an even cooler view… 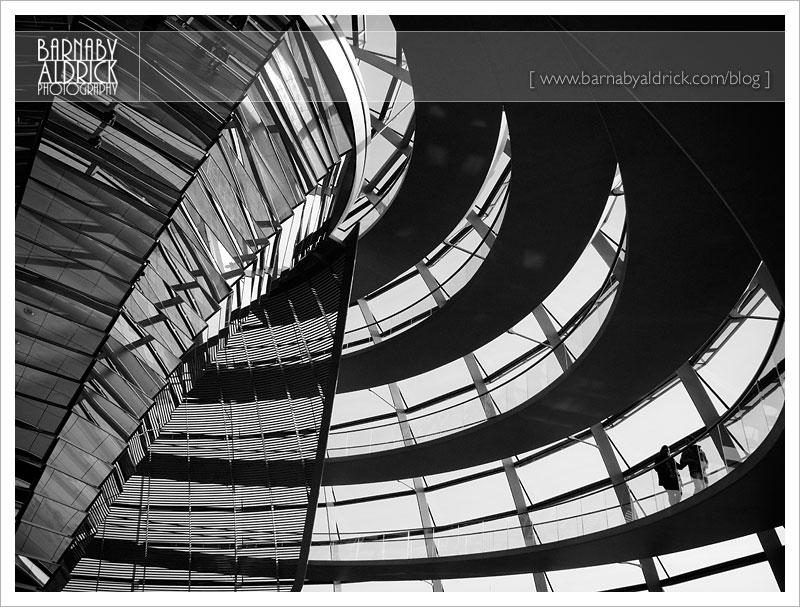 That large grill is a sunsheild, because the mirrors around the centre bounce light around inside and down through those windows on the floor into the main govermental chamber below!  Genius. 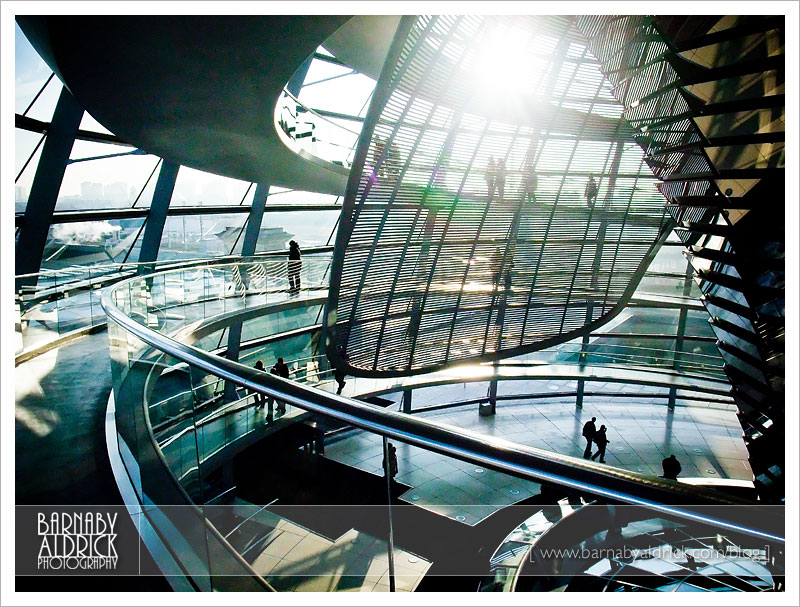 Over the couple of days I caught a few interesting POVs of the Iconic Brandenberg Gate. I can’t decide: Which do you prefer? 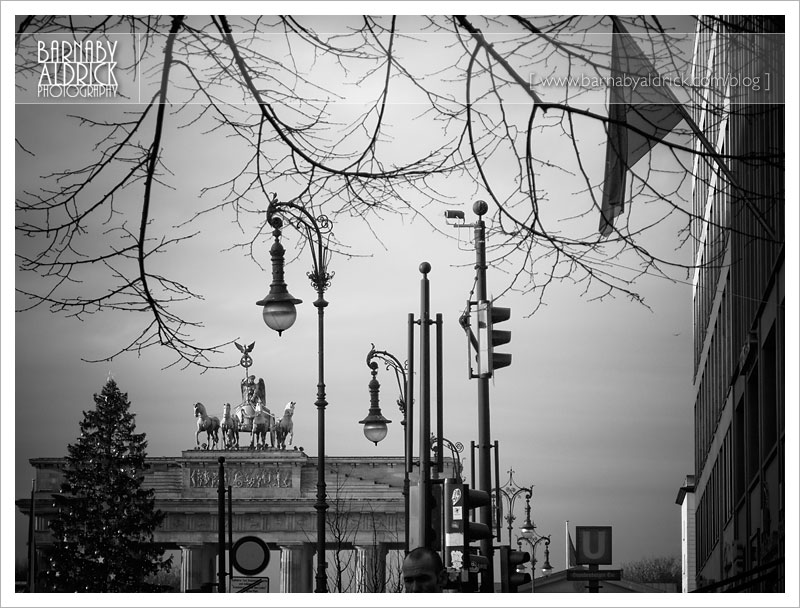 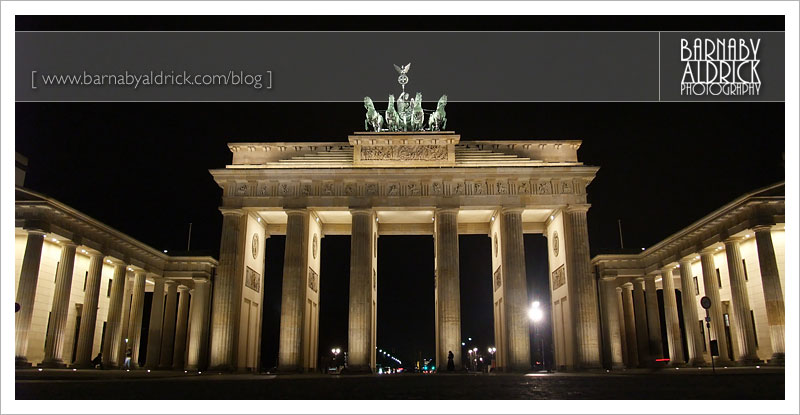 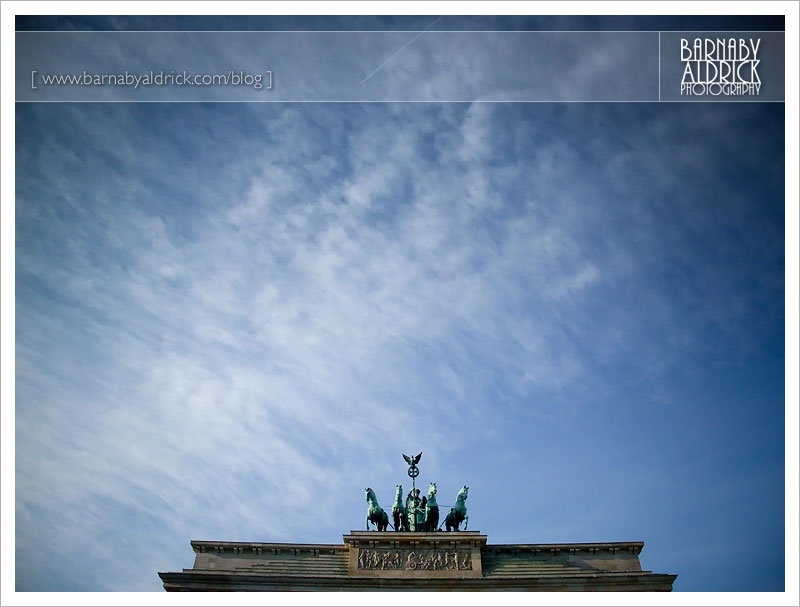 Just down the road was the city-block sized Holocaust Memorial: 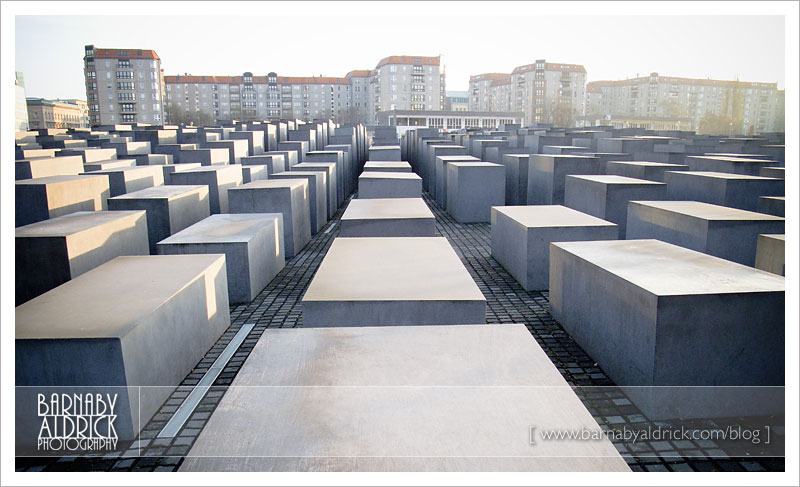 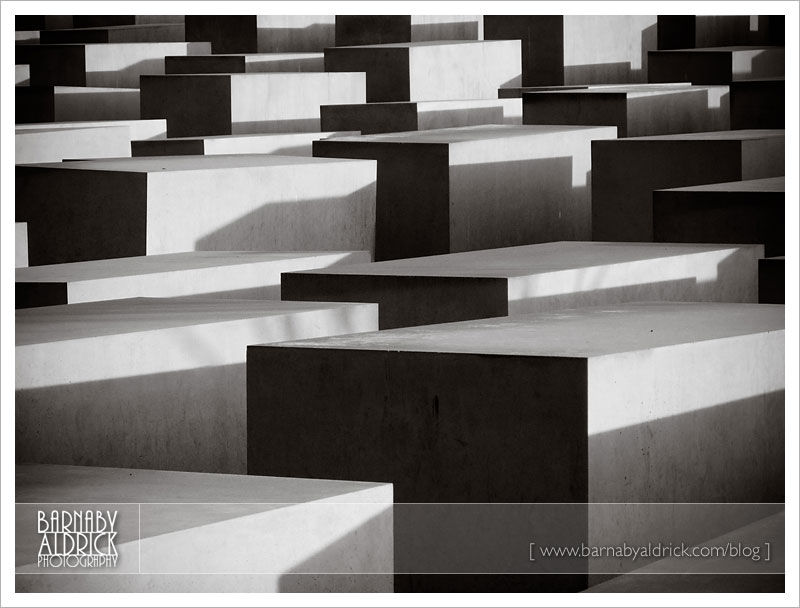 that poignantly go deeper than they appear 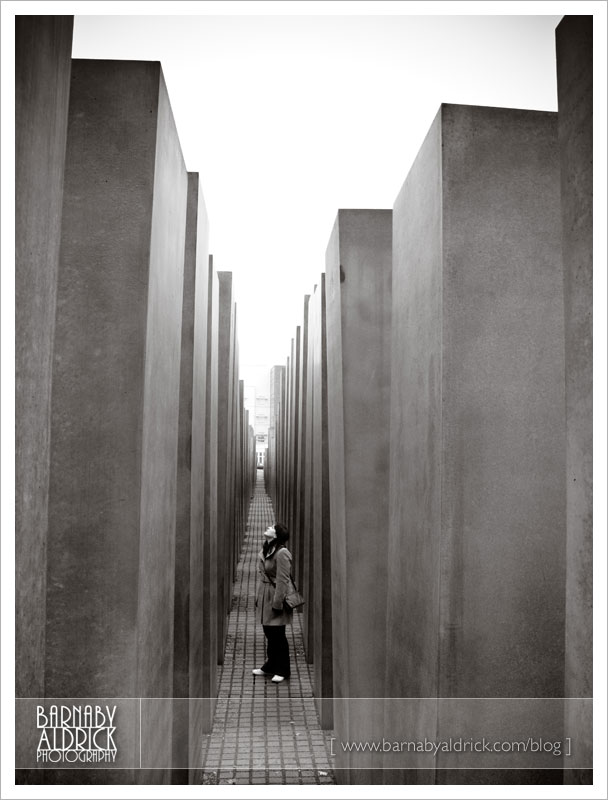 We stopped into the DDR Museum on the Eastern side of the former wall and learnt all about these basic little cars.  They’re made of fiberglass! 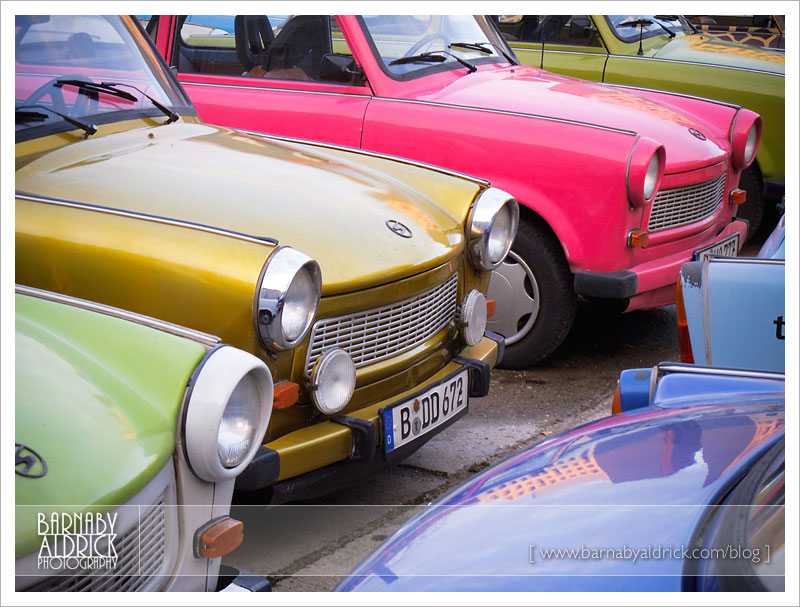 One of the longest remaining stretches of the Berlin Wall remains alongside the incredible (but sadly outdoor!) Topography of Terror exhibit, round the former SS buildings.  Recent history really fascinates me, and to see the actual Berlin Wall and stand on the site where such atrocities were planned and executed was so fascinating. 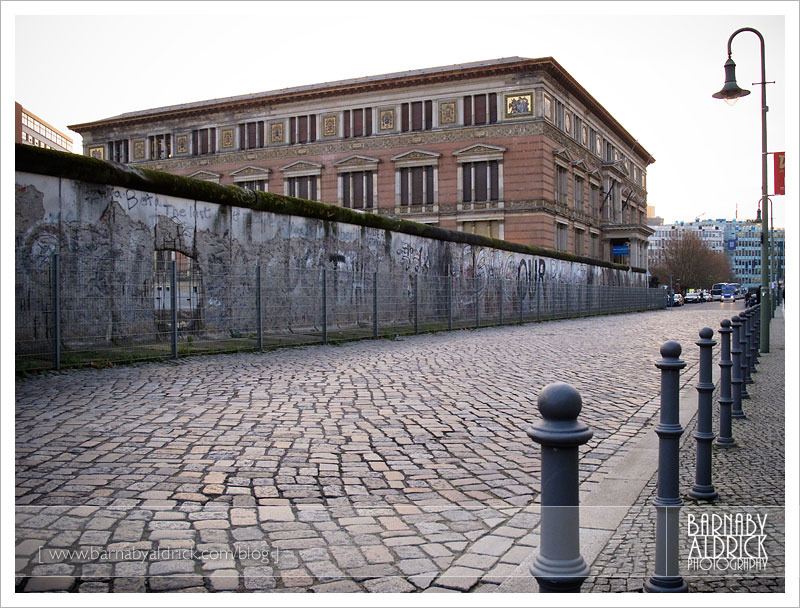 Just down the road was ‘Checkpoint Charlie‘, the former American/Soviet military checkpoint on the Berlin Wall.  There were so many free displays on every corner bringing history to life.  Loads of huge photos were being displayed from the East/West divide and from the Nazi period and it really brought home the power of photography.  Look at this photo of a Soviet and Yank tanks, standing off for 13 tense hours with itchy trigger fingers.  A thousand words eh? 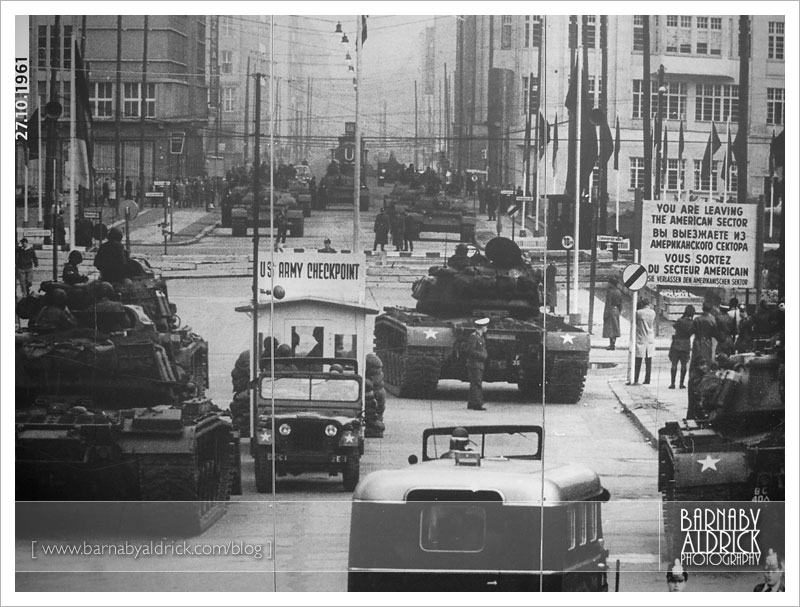 [Just slightly down the road was the cunningly named Snack Point Charlie.  Points to whoever thought that through!]

Some of the photos I saw hanging in the Topography of Terror were even more powerful and harrowing, but aren’t really suitable for here.

Berlin is a great looking city.  Amazingly so considering the number of postcards I checked out showing post-war decimation.  It was essentially flattened, then taken street by street, and a slightly closer inspection of pretty much EVERY pre-war building revealed showed the pockmarks of warfare. 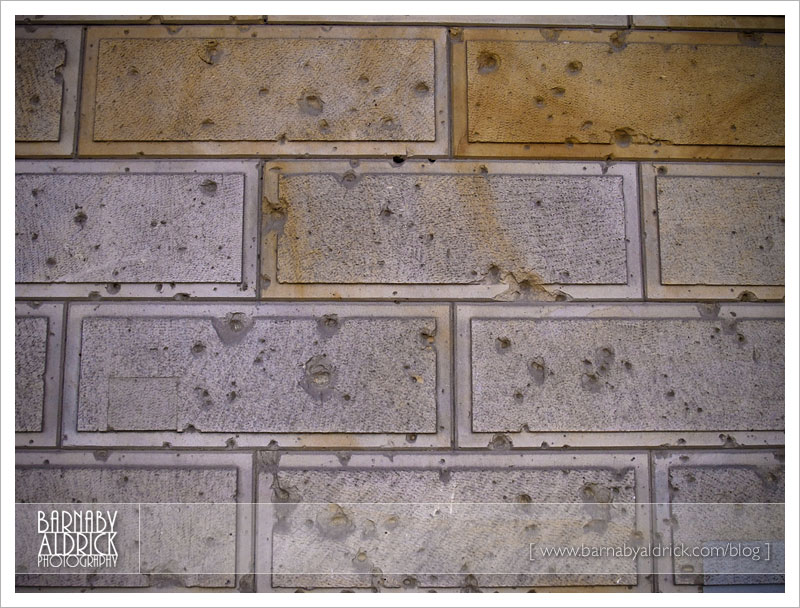 We began to flag so caught a cuppa cwaffee as a pick me up. 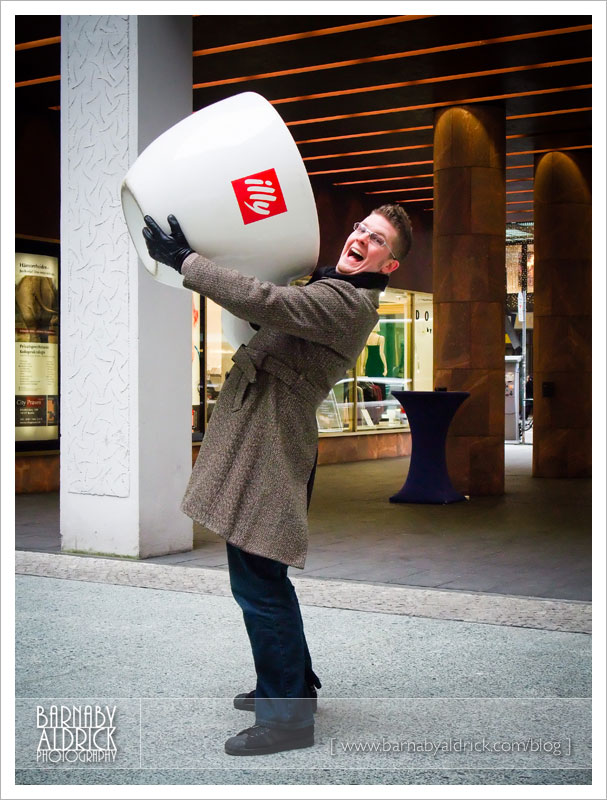 And stopped into yet another German market for variations on Gluvine (Jagertee or heiße caipirinias anyone?) and an impressive number of variations on the petty hotdog 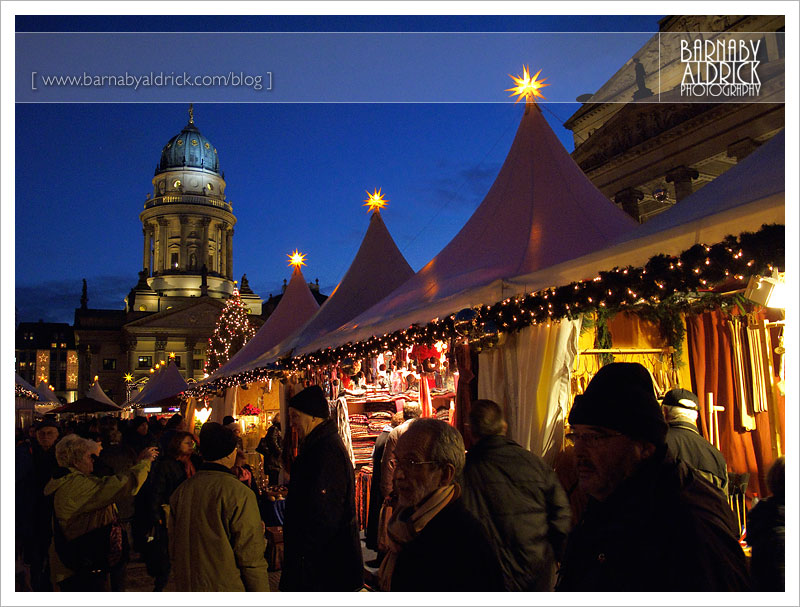 This little guy, the humble Currywurst, was so much better that it looks, a roasted & chopped bratwust sausage under curried ketchup with a mild curry powder ontop.  Service hot in the cold with a mug of mulled wine. Happy 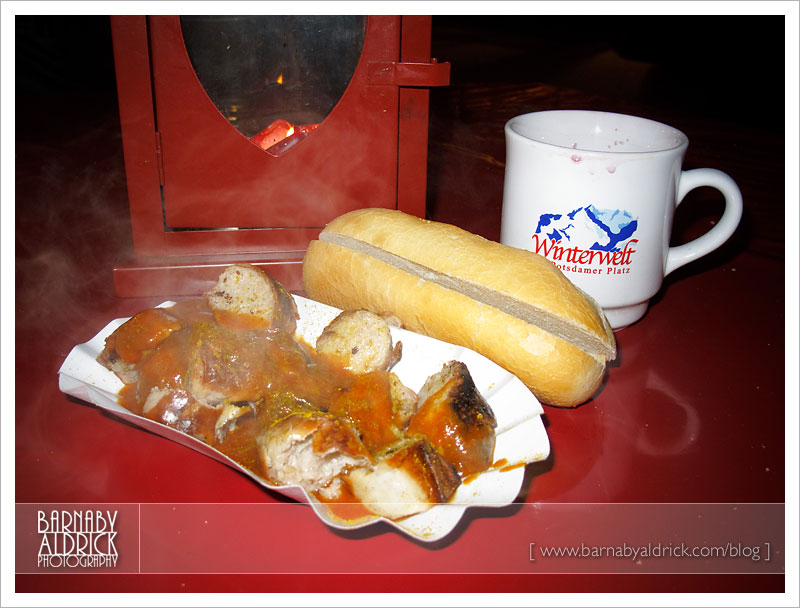 The next day we strolled round an arty area past the Kunsthaus Tacheles building, a home of various exciting artists in an impressively rundown building in Northern Berlin.  The building itself is full of art installations and is itself a living breathing piece of art.  We stopped into this bar for a couple of pints of the local red or green local beer and had a nosey afterwards. 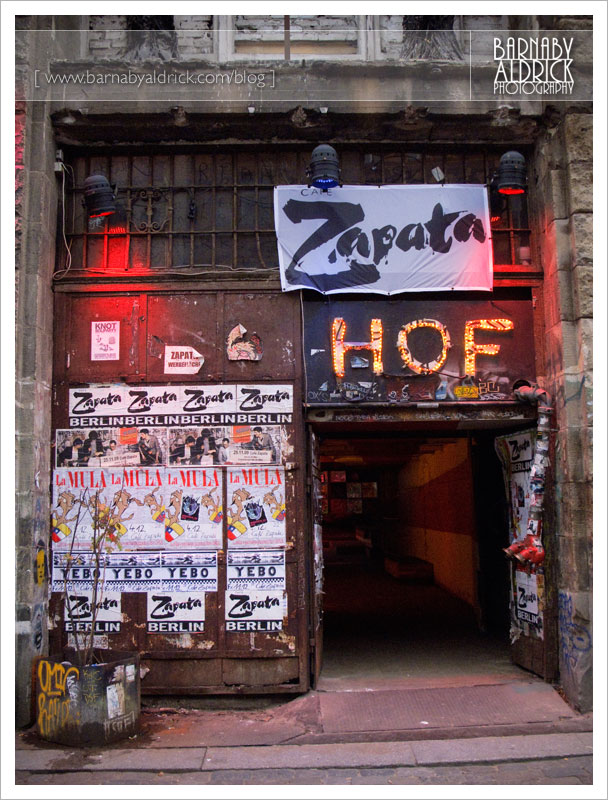 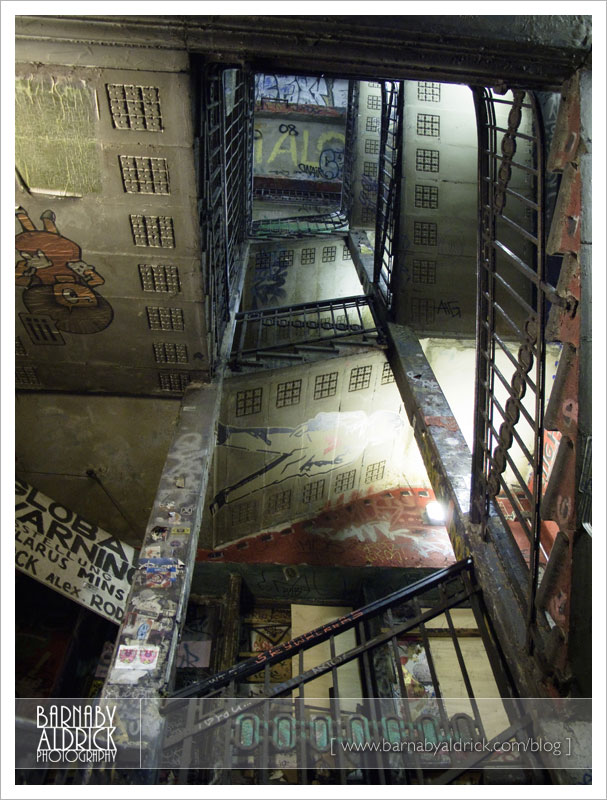 Back on the streets we spotted yet another market serving traditional Germanic grub, including the local speciality boiled pork knuckles! 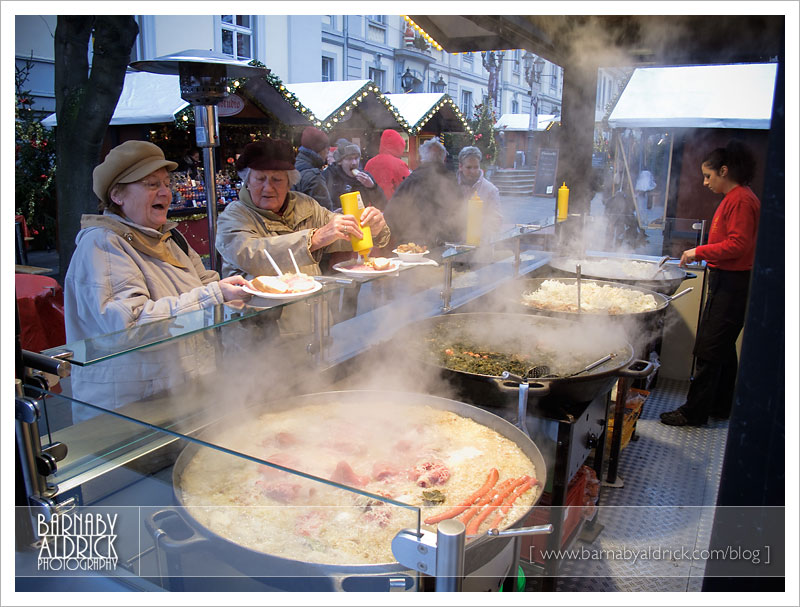 There’s a huge TV tower on the East side of Berlin that I really wanted to go up for a great view, but sadly it was in fog when we made it. 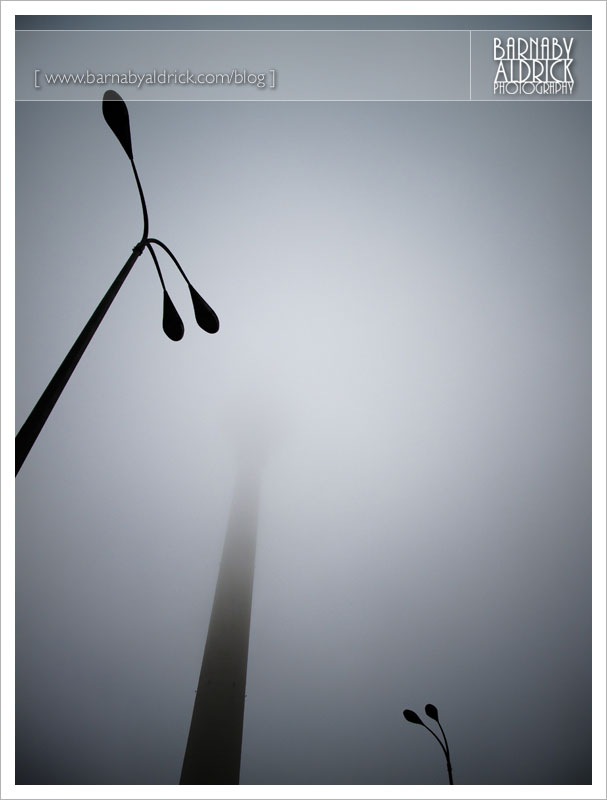 That’s all for now – hope you enjoyed my trip.  Berlin’s a great city fully worth a trip.