I’m off to catch Batman tonight at the IMAX at The National Media Museum in Bradford.  I won’t lie – I AM GIDDY AS A KIPPER! 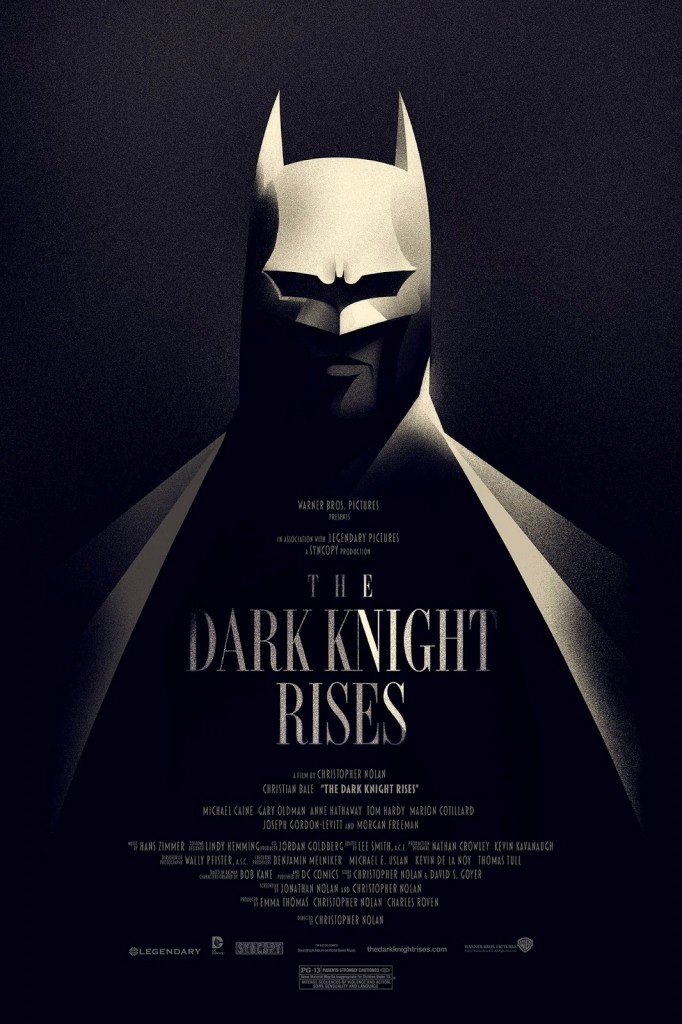 I’ve *so far* avoided spoilers, and having recently re-watched Batman Begins (the near-perfect franchise reboot) & The Dark Knight (great, if flawed by being too busy, following 3 villainous threads), and I’m so ready for the final chapter in Christopher Nolan’s trips to Gotham.

I’m a bit of a film nut, and love that Nolan is going down the IMAX camera route instead of simply shooting in 3D (or worse retrofitting 3D in post).  3D is such a waste of time, offering little cinematic benefit you don’t immediately get used to, and essentially darkening the whole viewing experience, by having to wear polarised glasses.  The only film I’ve really enjoyed the 3D in was Avatar, and that took James Cameron a decade to get right.  Besides, as with any film, it’s cos the film was good, not the 3D really – and it was essentially Dances with (blue) Wolves anyways, with that annoying stateside subplot that any American can infiltrate a primitive tribe, learn their ways, do it better than them and get the girl in no time at all.

In photographic terms, if you know the difference between shooting a 35mm film and a medium format film, you’ll know that bigger film negative captures a more detailed, arguably more dramatic image.  Remember those super detailed images you saw in Athena or IKEA of a monster wave crashing against a lighthouse with some dwarfed old keeper stood outside the door having a tab?  They were usually Medium format image, capturing such tiny detail, and scaleable to large prints without detail loss.  The restriction of the medium was always that they were less portable & more expensive and, like in the Betamax vs VHS world, the best quality product didn’t always win in the consumer  marketplace.

Sensor size, as well as the quality of the glass bolted on in-front of a camera, is the reason why your camera phone image is crapper than that produced by your compact, and why an SLR produces better snaps than a compact.  It’s to do with sensor / film sizes > bigger sensor / larger film  finer detail.

IMAX follows the same rule.  Academy format film is generally shot ’35mm’ film, while IMAX film is 70mm!  Like so: 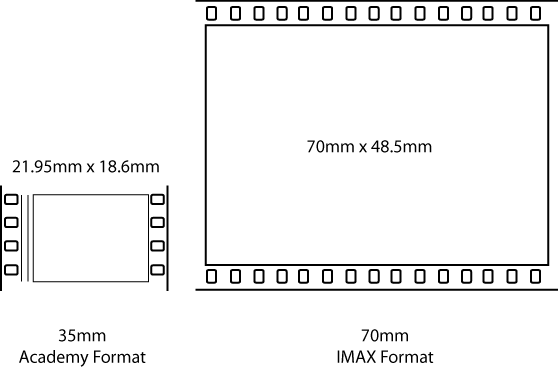 That’s one of the reasons, paired with the bus-size screens they’re projectable onto and the camera techniques employed to overwhelm your sense balance, why IMAX presentations can make you feel like your falling out of your seat.

You can read more about Nolan & his ace DP Wally PFister’s experience with IMAX here.

So in short – this is why a higher quality image is clearly a better idea in the future of cinema than headache inducing screen darkening (& therefore degrading) of altogether smaller 35mm prints.

While on the subject of big being better and old school being cool – did you guys see the link going round on Facebook about the New York artists who literally paint a 150ft poster on a Park Avenue South building?

Check this out for the latest Batman film: 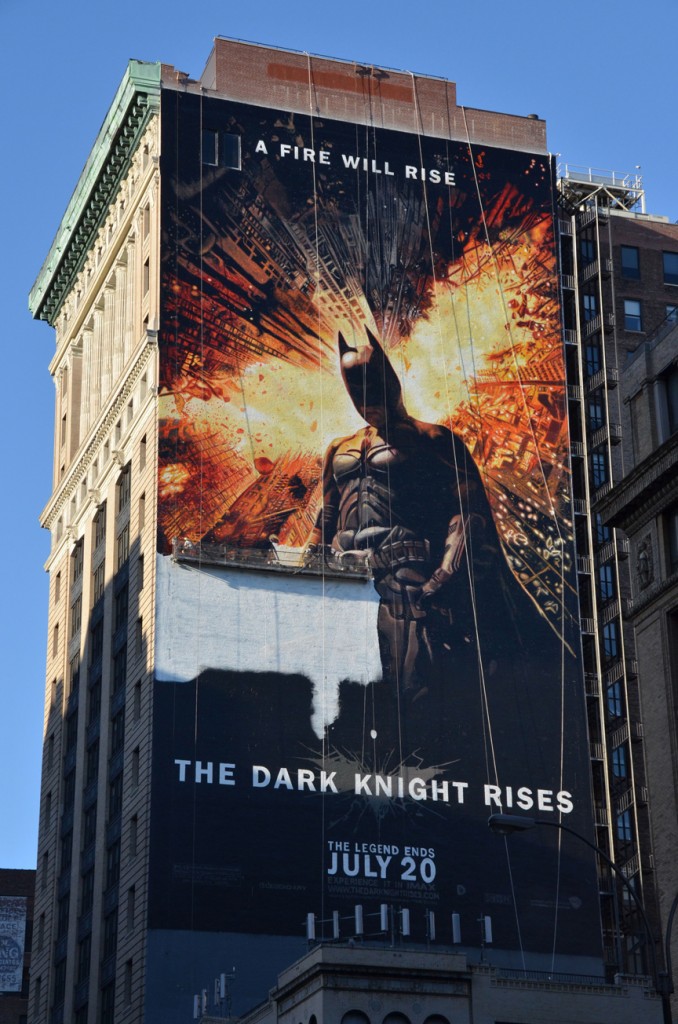 Not only do they do this from a crane, stood literally feet from the wall, but then have to paint over it and do another poster 6 weeks later!

Check out this ace blog highlighting exactly hot they do it, up close here.

Finally, in my three randomly tied together cinematic points of interest, I got this ace book last Christmas called ‘Information is Beautiful‘ by Davd McCandless (check out his ace site here).  He’s a London-based  data journalist and information designe with a passion for visualizing information – facts, data, ideas, subjects, issues, statistics, questions – all with the minimum of words.  His ‘infographics’ are creatively presented images that reveal hidden connections in the every day world, and the patterns and stories underneath.

But as I was reading it, on the loo if you must know, I saw this one, that said all movies can be did you know that all movie from literally ALL film plots can be summarised into 22 stories.

Check it out (& click it to see it larger in a new window): 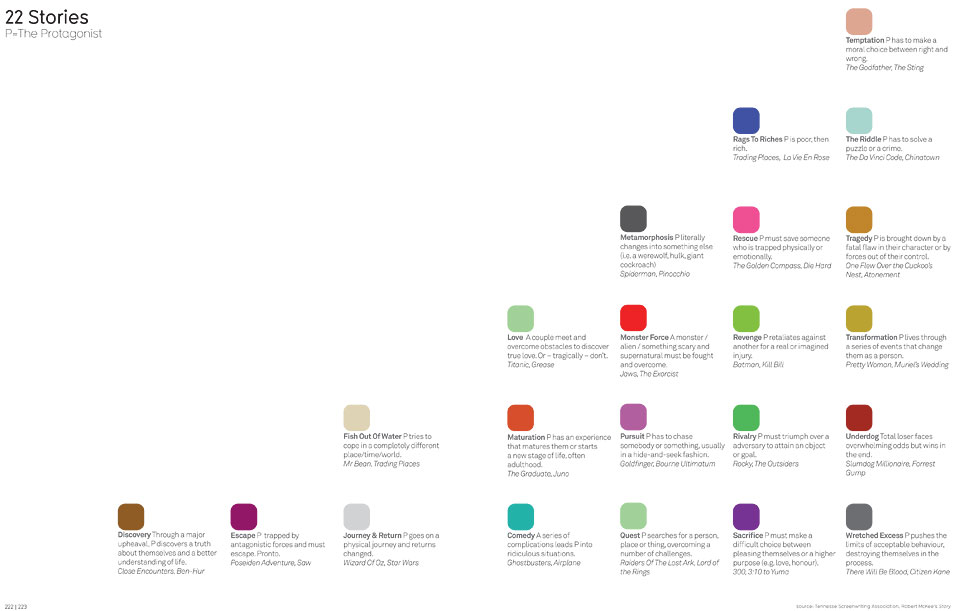 So there you are – it’s all about IMAX, real big posters & revenge.

You heard it here first