Man! It’s clearly shooting season when pretty much every blog I post is either a wedding highlights or a pre-wedding shoot!

But even when times are busy, I do still try to make time and take the opportunity to get out and shoot things for myself. 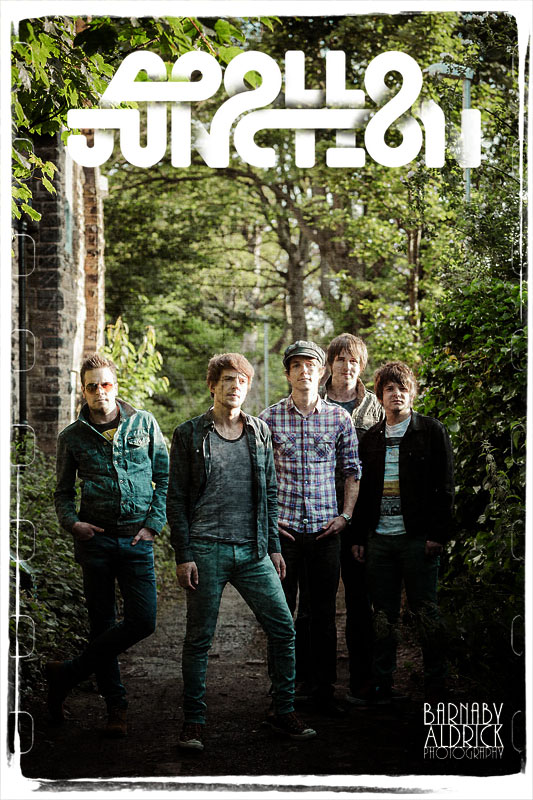 A recent example of this was a shoot I did a few weeks back with upcoming Leeds-based band Apollo Junction.

These guys are an electro independent outfit writing music for the masses and in the process of releasing their first album in Autumn 2012. Having supported bands like Dizzie Rascal, Calvin Harris, The Bluetones, Cage the Elephant, The Hoosiers, The Sunshine Underground and The Maccabees, they’re destined for big things. 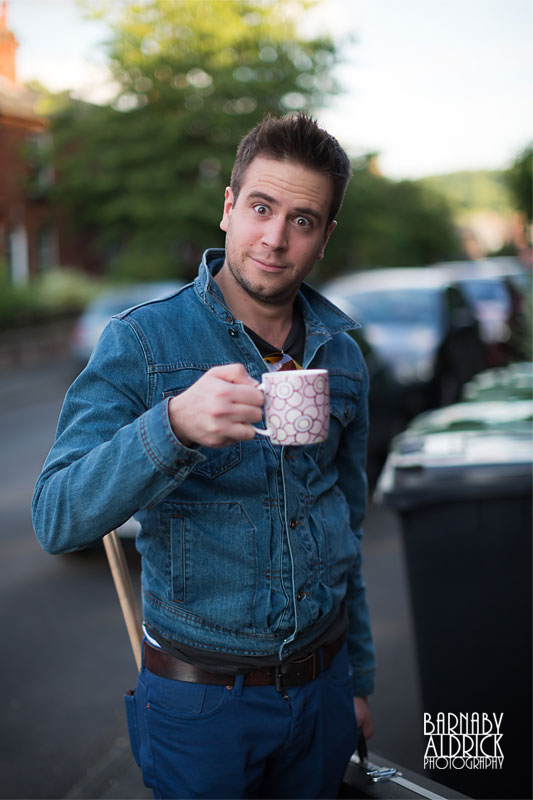 JT, the band’s drummer and a good pal of mine, asked it was he who asked I fancied joining them for a shoot.

I got to know JT a few years back, when we spent a good few weeks together on a charity project with Link International around Kenya & Uganda.  I was out on photographic duties and I posted a whole bunch of blogs about our adventures here.  Looking back at a few of the posts brings back a whole lot of memories; we got up to some pretty crazy stuff. 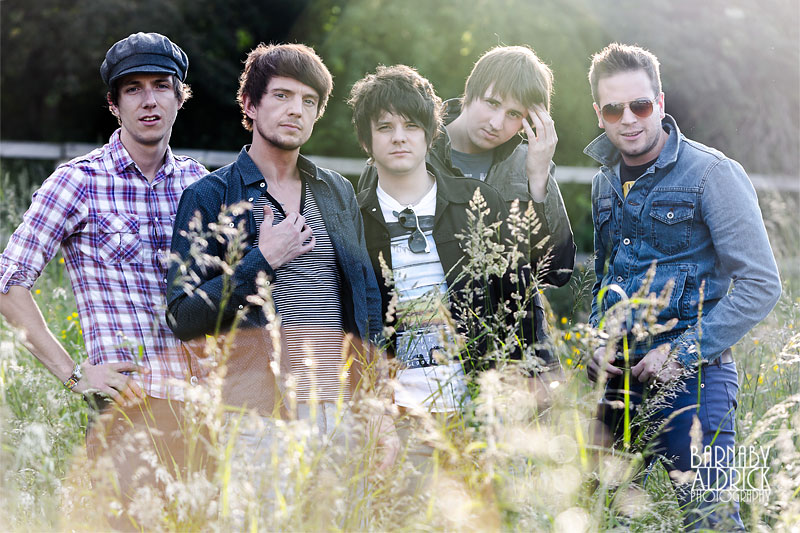 …but to the band shoot!

I’d never met 4 of these chaps before, and before I arrived at the house in Leeds I did a quick lap round the streets to see if any backgrounds caught my eye.  Seeing the sun was out, we had a quick meet & greet and before they knew it, I’d dragged them into an overgrown field on a building site

The sun couldn’t have been better, and this image above was literally one of the first frames out of the 5DmkIII with the 70-200mm lens. 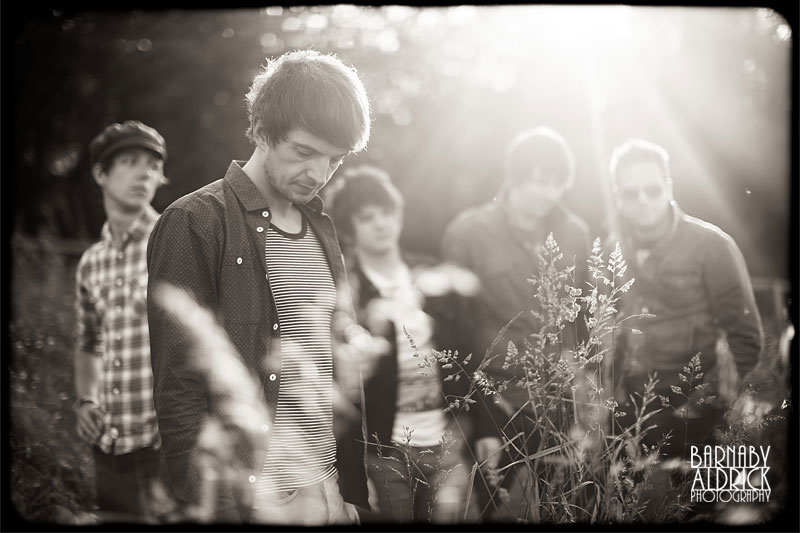 A slightly more reflective image, focussing on the singer Jamie, in the evening rays. 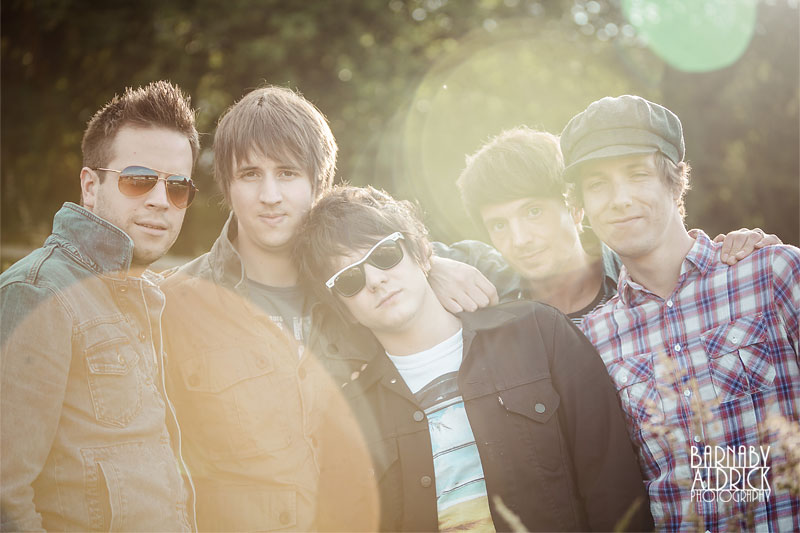 I always find it interesting photographing bands and while there’s rarely a great deal of money in it, I get a kick out of doing it.

There’s often a fragile balance of ego, band dynamics and general testosterone floating around – and if not carefully handled can detract from a good shoot.  As a photographer – as well as being able to take a good photo – you’ve got to play the situation carefully, quickly building trust and keeping the band relaxed and the mood light hearted. 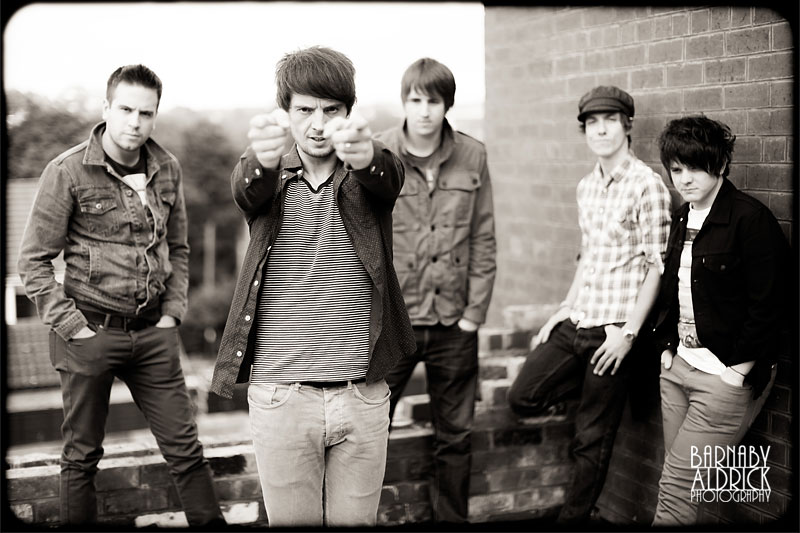 This is one on the 50mm lens aft f1.2, and I could see early on that these guys were naturals; and like shooting professional models, they kept surprising me with interesting ideas every few frames. 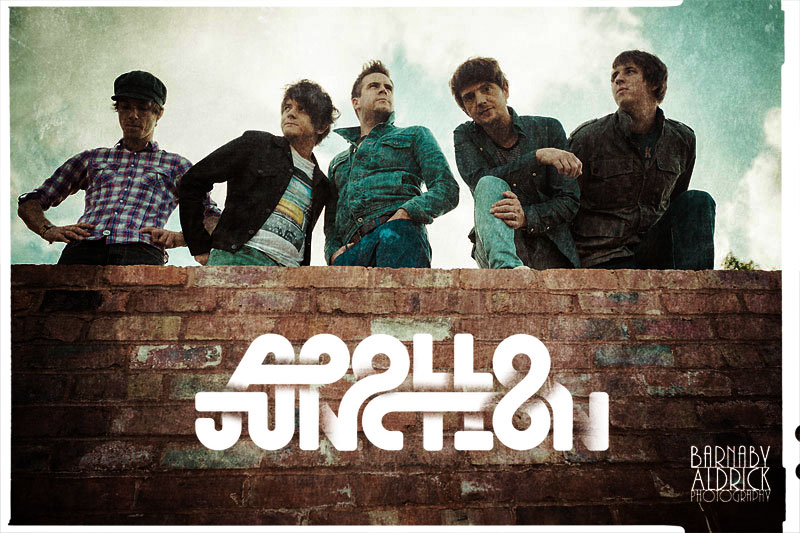 I’d shot a bunch of images with space for their logo, should they wanna use them for posters/artwork etc.

With a bit of a grungy texture and their logo, it comes alive, eh? 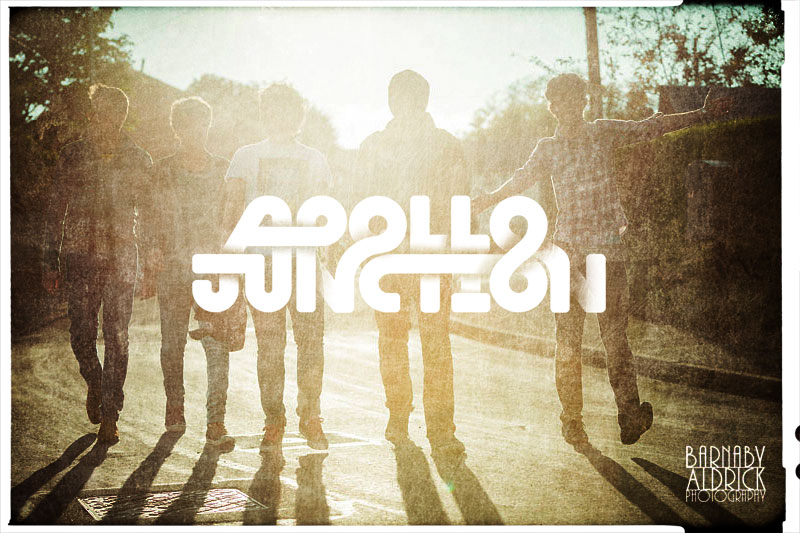 Things often look sweet with a logo and a bit of graphic design! 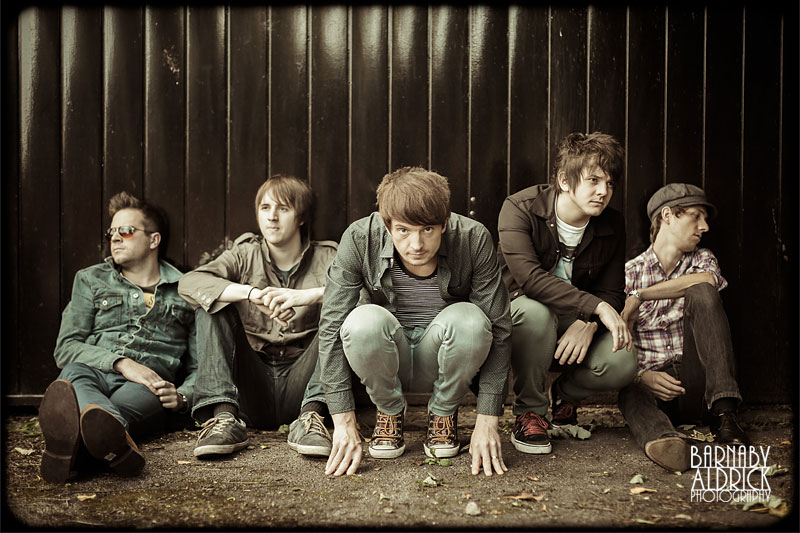 Another spot I spotted and kinda like as we strolled around the backstreets, was this old black garage door. 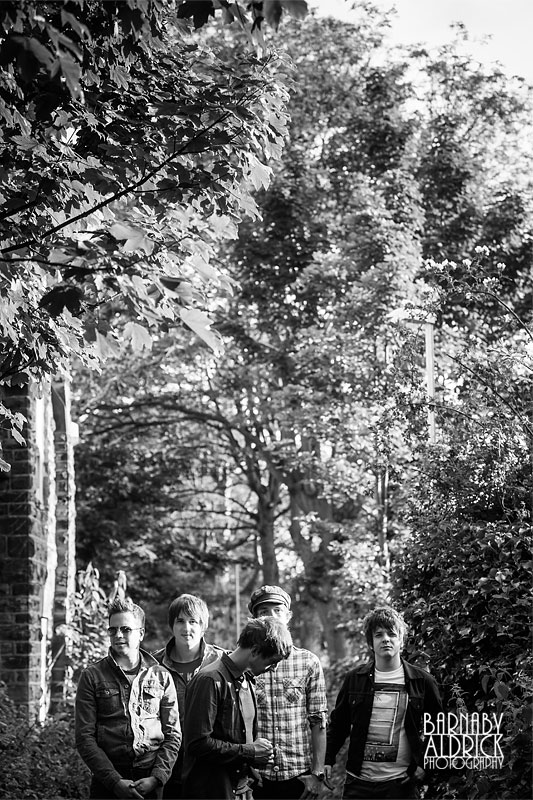 For me, it’s about constantly coming up with something more unique than the default 5 guys stood looking depressed in front of graffiti. 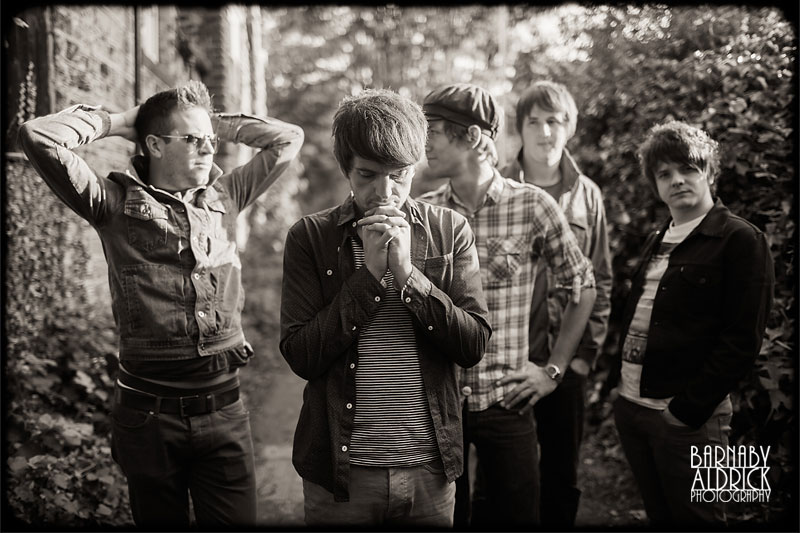 I like the range of poses the guys were doing in this one. 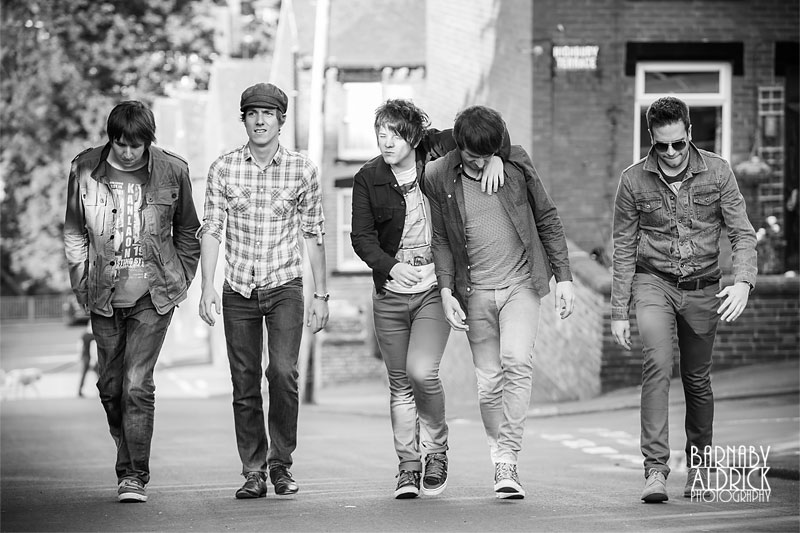 A character-full shot walking up the road 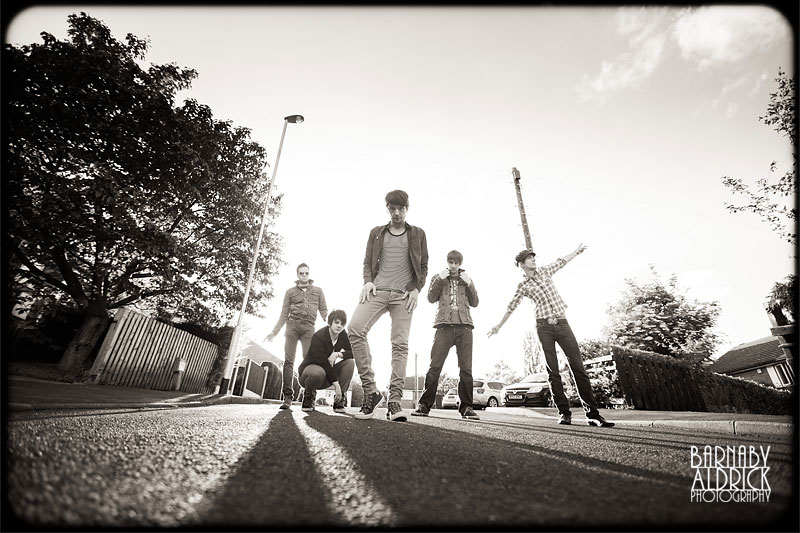 At the top of the road, in the backlit late evening sun, I spotted these long shadows, so I lay down on the floor with my wide angle 16-35mm lens on.

I love the random mix of poses 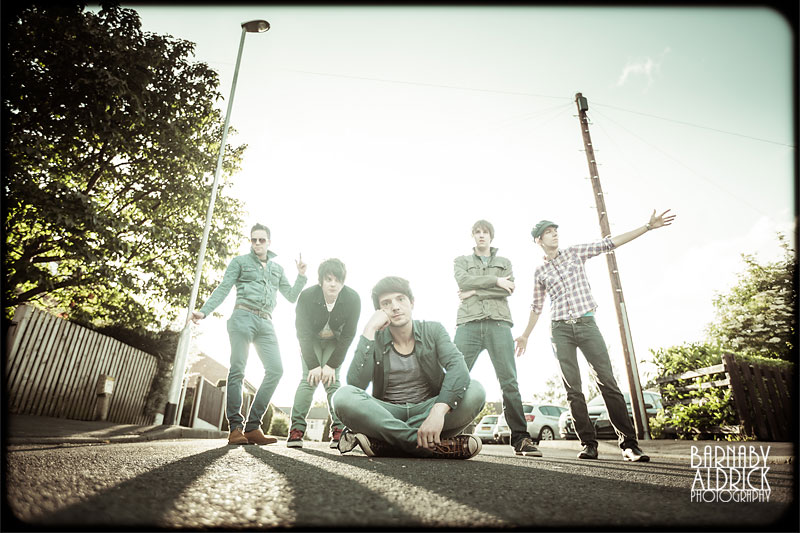 The singer Jamie’s seated position makes this one. 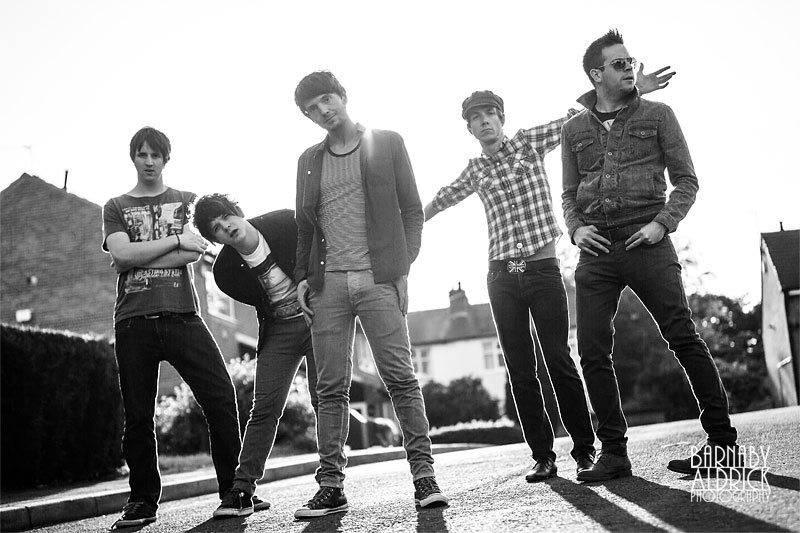 It’s all about Matt, 2nd from the left in this one!  Choice post, reminiscent of the stars of the Madchester scene, once upon a time 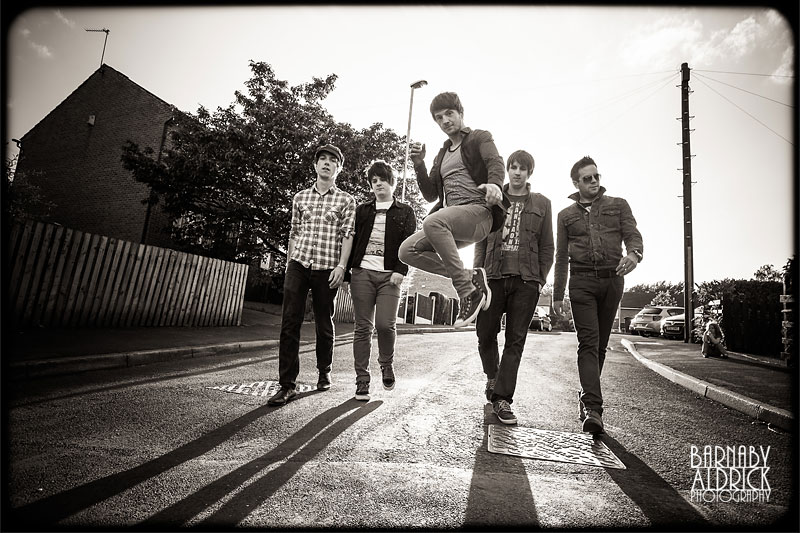 Another of my faves of the day, catching the singer appearing to float; shot from the hip on the 16-35mm, walking backwards down a busy road! 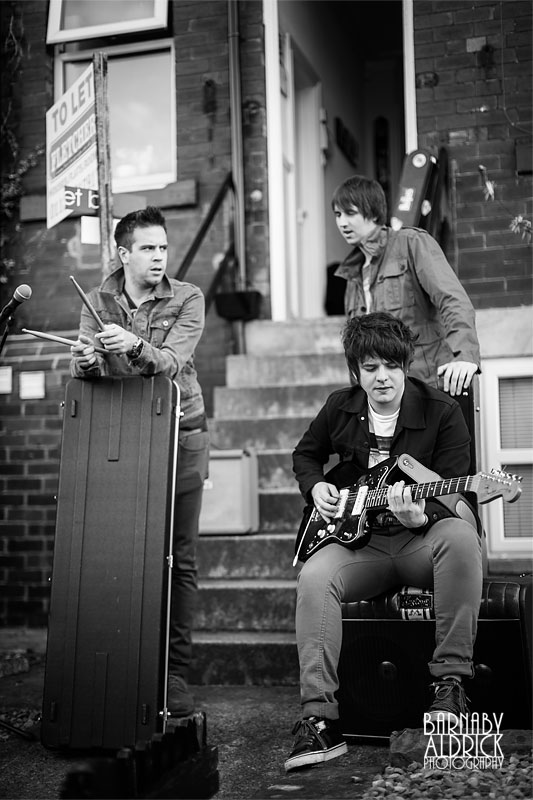 After an hour or so exploring the backstreets, we went back to the pad for a brew, and to collect a few instruments for a shot I had in mind. 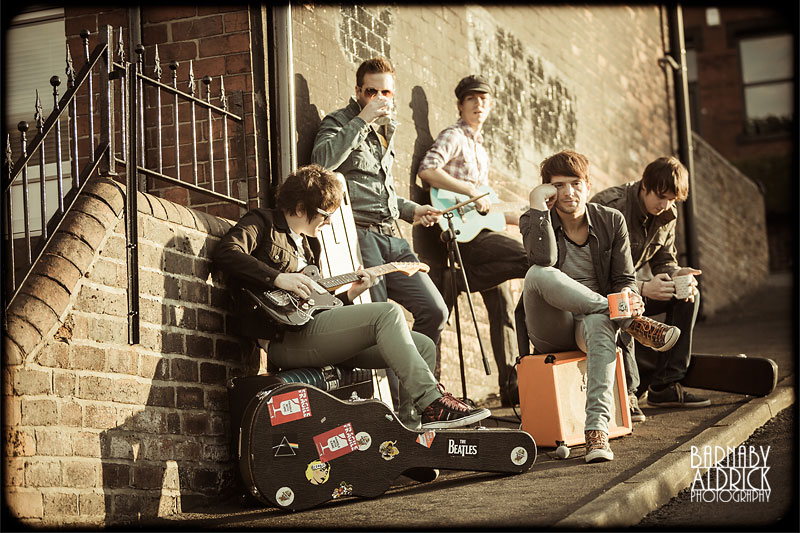 Basically, I’d thought that it’d be cool rounding up a bunch of gear, and sitting on a road-side looking like they’re waiting on the tour bus.

I like the fact that some of them have a brew, the guitarists are having a noodle, and the singer, Jamie, is making eye contact. 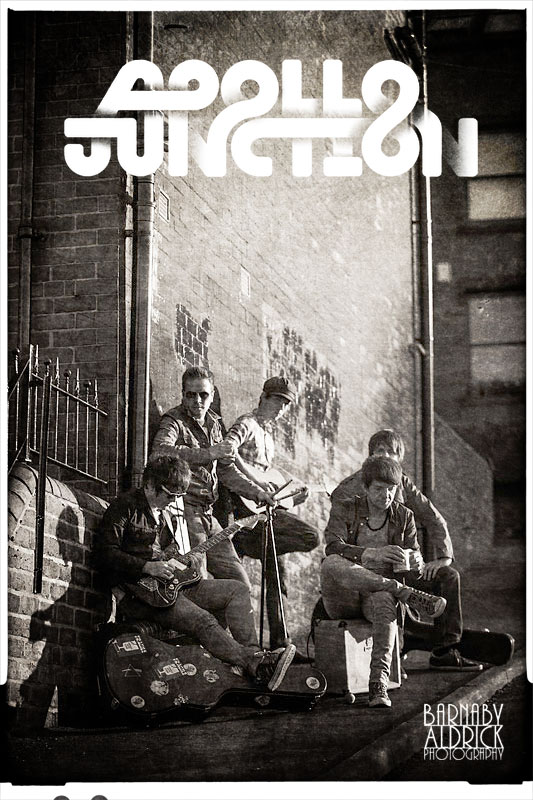 Again, I left a bit of space on some to add in the logo. 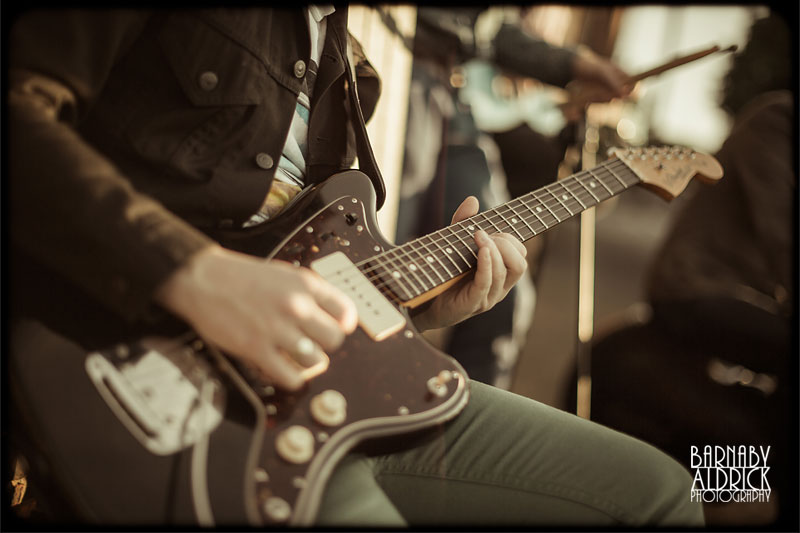 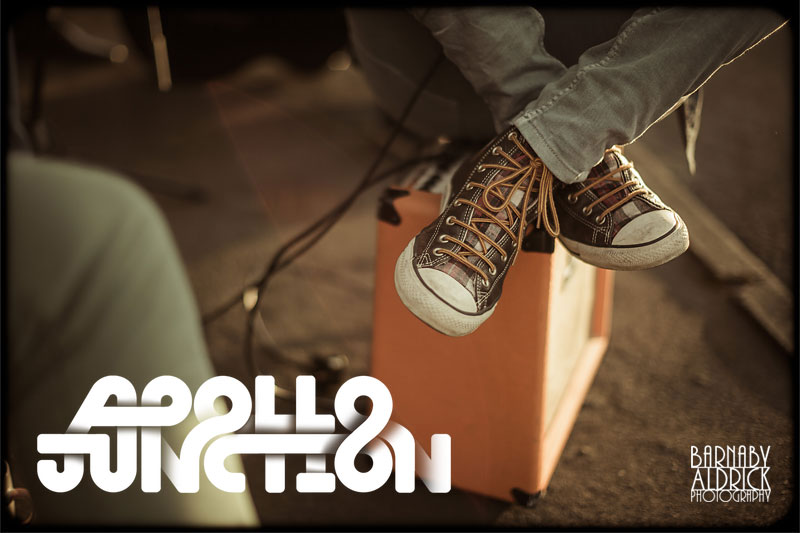 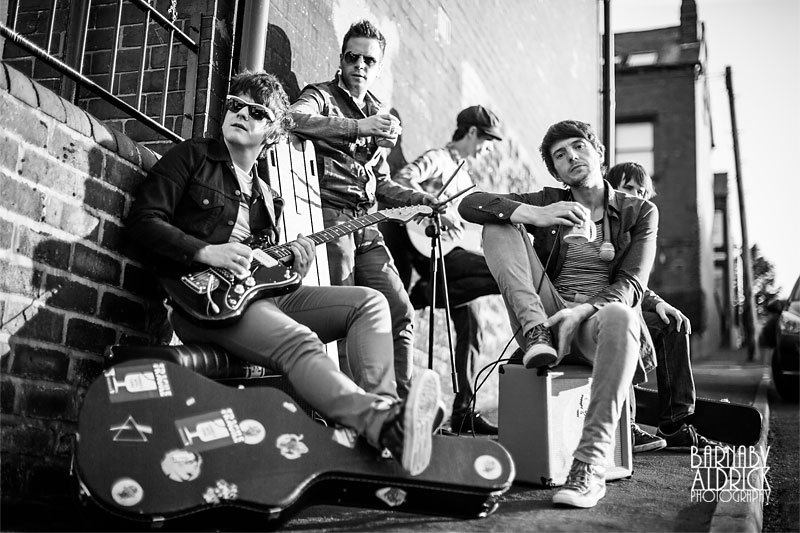 This is one of my faves, on the 50mm at f1.2.  I like how it shows all the guys, relaxed and doing their own thing, but with plenty of interesting detail to draw the eye 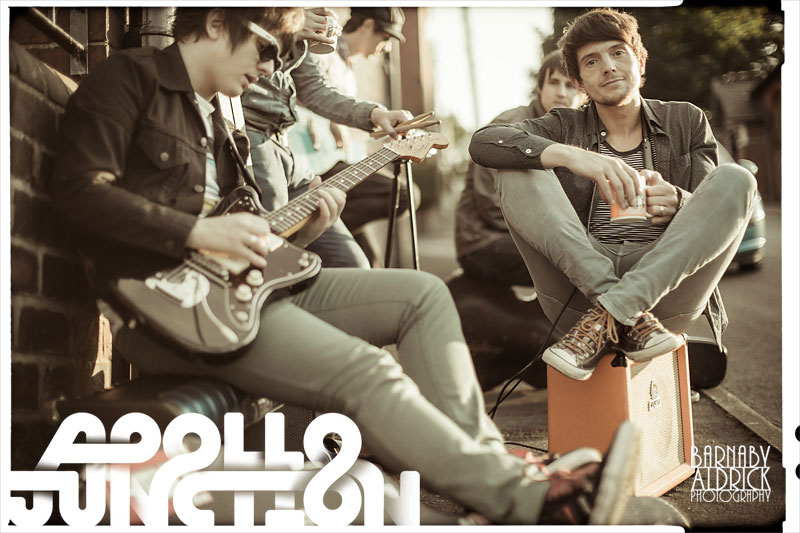 I really like this one, a laid back moment, with good eye contract.

There were so many to choose from, I’m really not sure I could pick a favourite image.  The band were great to shoot, and it goes to show that you can get an ace stash of pics within 100m walking distance from a house if the band are game and open.

Do check out Apollo Junction’s tunes on their official site here, their Reverb Nation page here (good to hear a range of their material) and if you’re hungry for more, check out their Soundcloud page here.