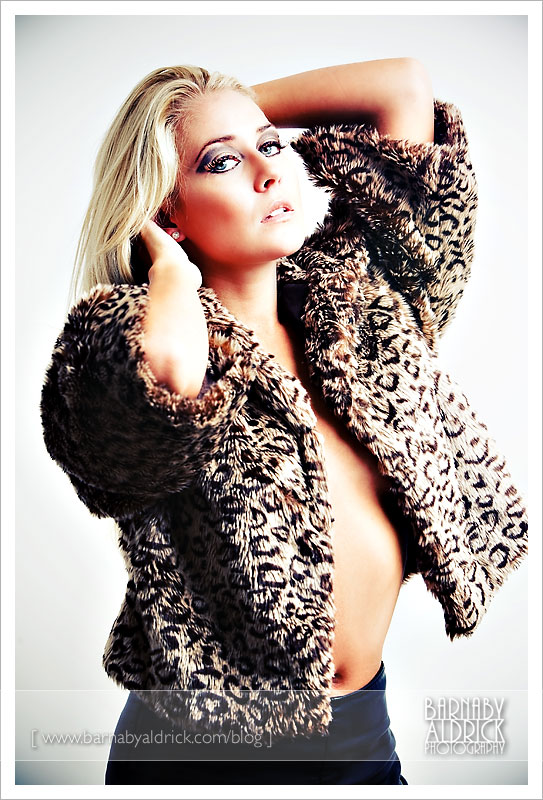 A few weeks back I met Rob Booker & Phil Barber for lunch & a chin wag at The Cross Keys in Leeds.  I was shooting for the Leeds Guide that day.  We’d decided our current project was to set up a flash photography day to share our respective photonic knowledge-base.  I’m pretty versed in how to get what a wedding photographer requires from a TTL flashgun, but gaze upon studio flash-heads with a certain mysterious awe.  Booker knows his flashheads backwards from his headshot work, and Phil’s like me but was keen to dust off his Elinchrom heads. 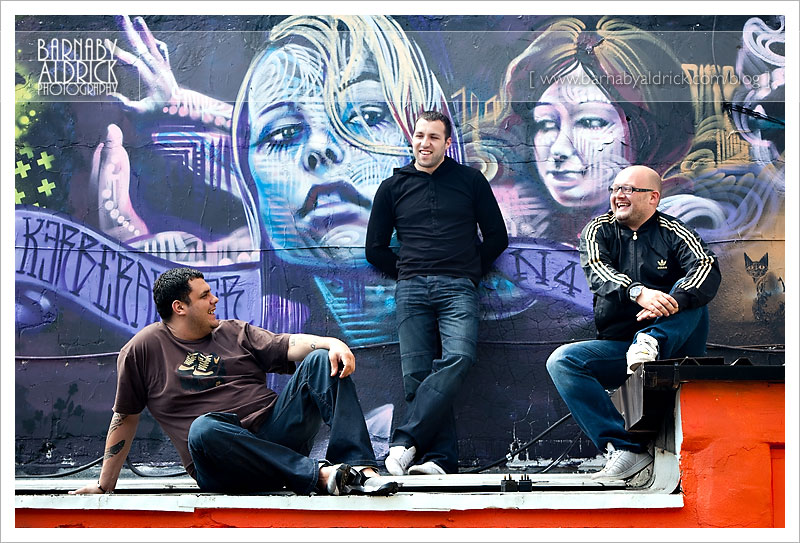 So we had a think.  I’d literally just met and photographed Andy & his business partners (above) for a Leeds Guide night life feature.  They run a club in a massive warehouse on Water Lane called Kerbcrawler.  I popped back in on the way back to the car to ask Andy if he’d mind if we possibly came to do a flash day sometime.  He mentioned he had a mill / knackers yard / mechanics / recording studio over in Wortley that might be more suitable.  So a week later I went for a peep (below) and the place was ace.  Loads of weathered knooks & crannies, and a bunch of storage rooms full of all sorts of cool junk. 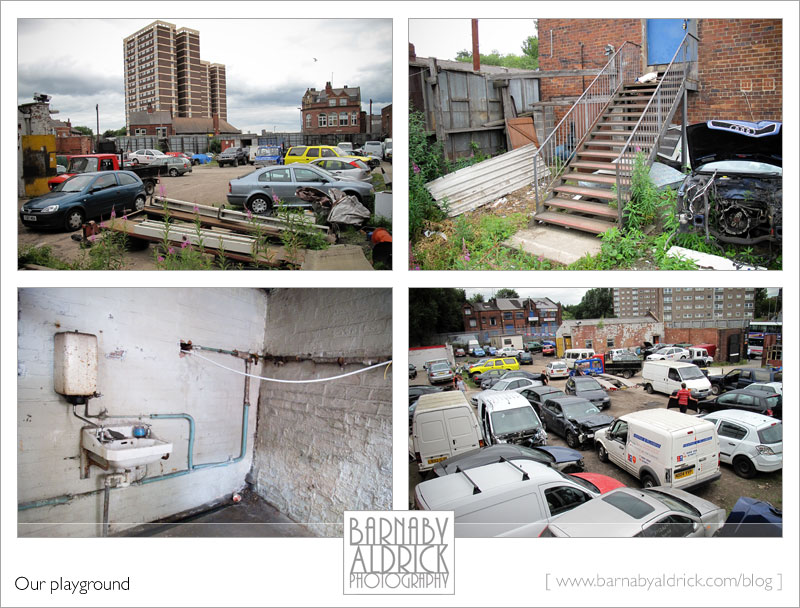 So the three B’s (Booker, Barber & Barnster) set a date with Andy, put a call out for models (in a TFCD capacity) & makeup artists on Model Mayhem and asked our pal Cris Matthews along for to document the day videographically.

A trip to costco and a coolbox brimming with beers & sarnies later and we’re all ready to party, at our mill in Wortley… in the rain.  Once we gained access we even had ace tunes pumping out from the Kerbcrawler DJ’s who’d been recording a set in the studio they’ve got there!

So – Let me introduce you to the team, starting with us togs.  First up – we have the deamon Barber, today, known as ‘Phil Flash’ 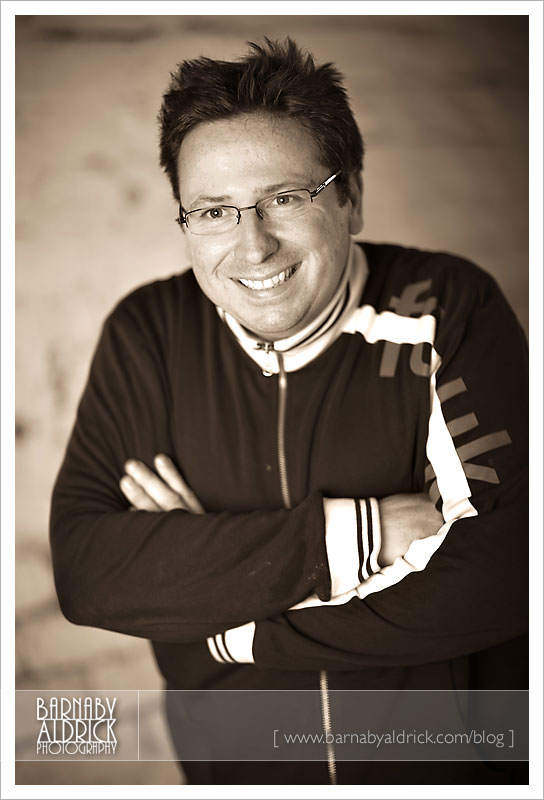 Then we have a bit of Robstacle ‘If you Booker, she will come’ (caught looking about 15 here) 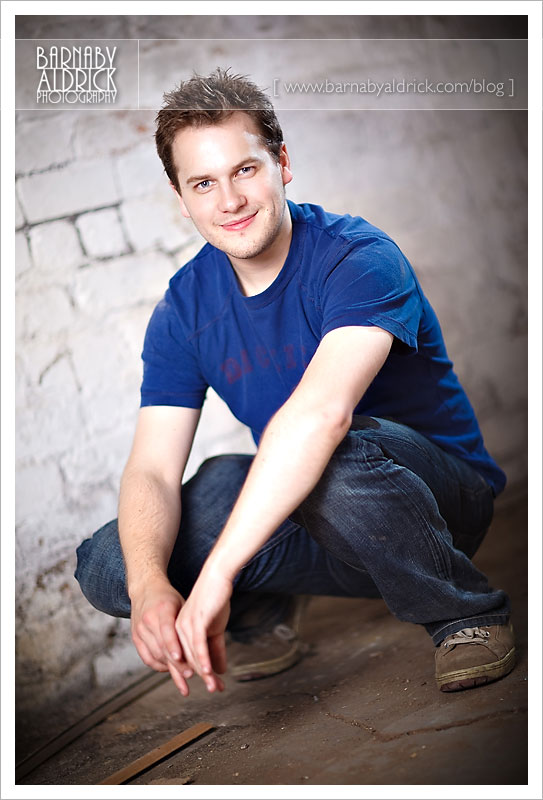 Next up, our man Cris Matthews.  Cris is a newish tog, striding along in leaps and bounds.  He’s skills he’s too shy to embrace, so wanted to come along in a second fiddle capaciy to watch the big guns shooting.  But what that really meant was that he got to watch us floundering about figuring out as we went.  So he ended up in an advisory yoda role, while filming bits of footage you’ll see here soon.  Here he is interviewing our models… 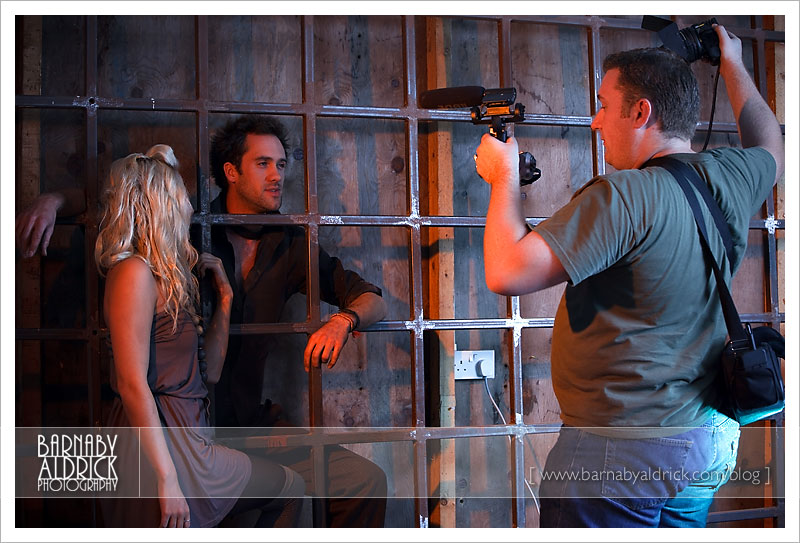 Our first model was the lovely Vivienne Edge (below, before makeup!) who has a great feline quality, even without the faux Cheetah.  As it happens, Barber & Booker pretty much hogged her and this was the only shot I got of her!  Another time… 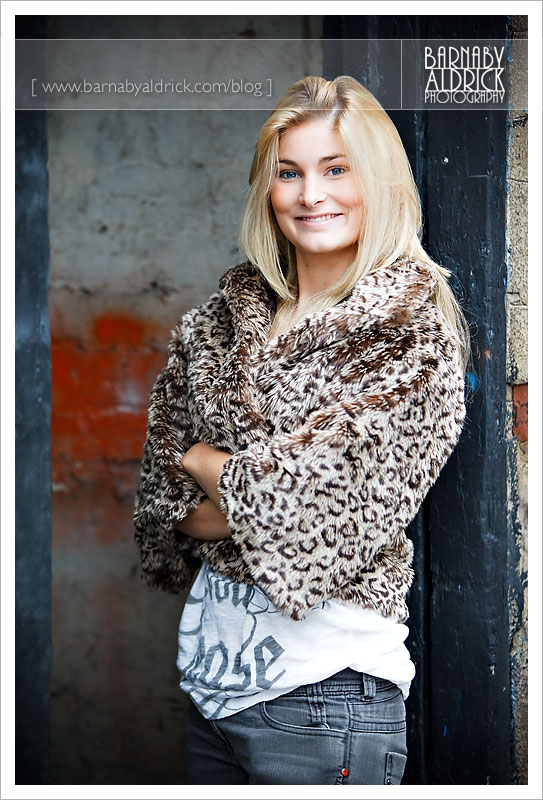 My little star was the incredible Steph Jones – a beautiful and bubbly young lady willing to give up her time for pix.  She was so much fun to work with and pulled amazing and interesting moves.  It’s such a JOY shooting with models who know how to work the glass; as opposed to stiff brides & Leeds Guide randoms [though that said, it’s a skill in itself getting shy awkward normals to look relaxed and cool].  So here’s Stef, during a ‘test shot’!  She might kill me for this… 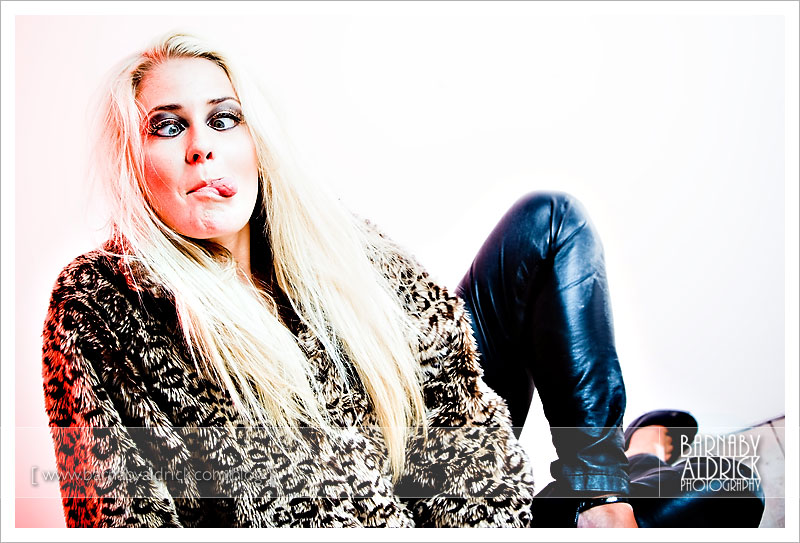 Next up we had the ace Clareski a photographer slash model, who was interested to see what we had going on on both sides of the camera.  Here’s a natural one. 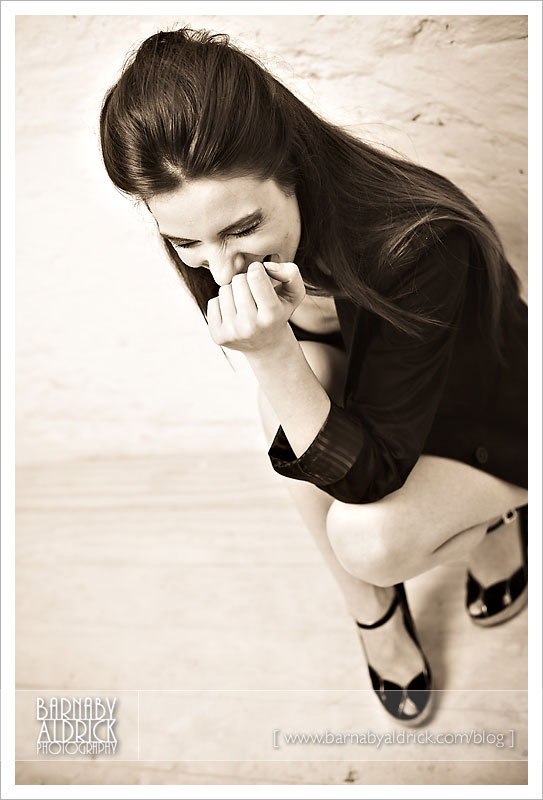 Finally, I asked my good man and muso artisan Matt D’Albert along for the fun and games.  He’s been one of my best pals since we were stop-out grungers with undercuts and ponytales.  He’s a slasher, working the rockstar / cleaner angle, and spends his days painting, drinking coffee & writing songs (check some of his tracks here).  He’s a legend and brings fun & good spirit to a gig like this. 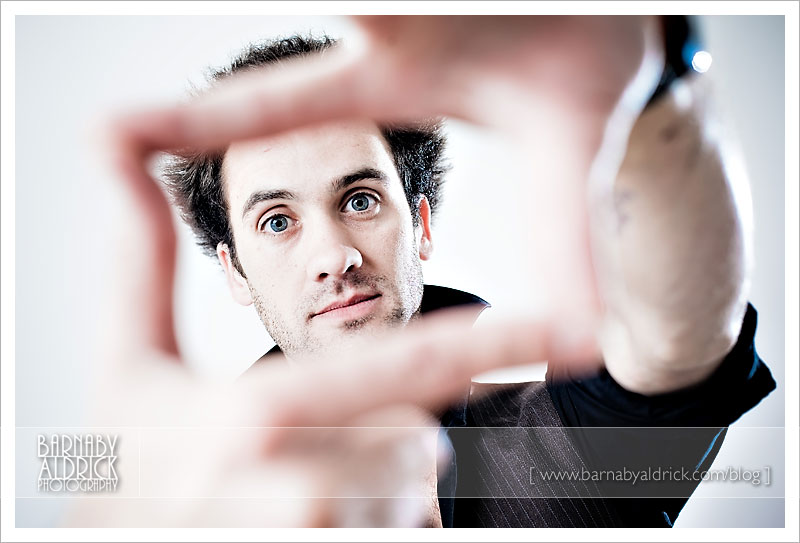 Last but in so many ways not least, we had Katy Padam working the Makeup angle with her assistant.  Katy had some serious skills and locked herself away for like 8 hours straight, making up each model like 3 or 4 times over.  We couldn’t have asked for better & I hope we can do this again, cos she was such a star. 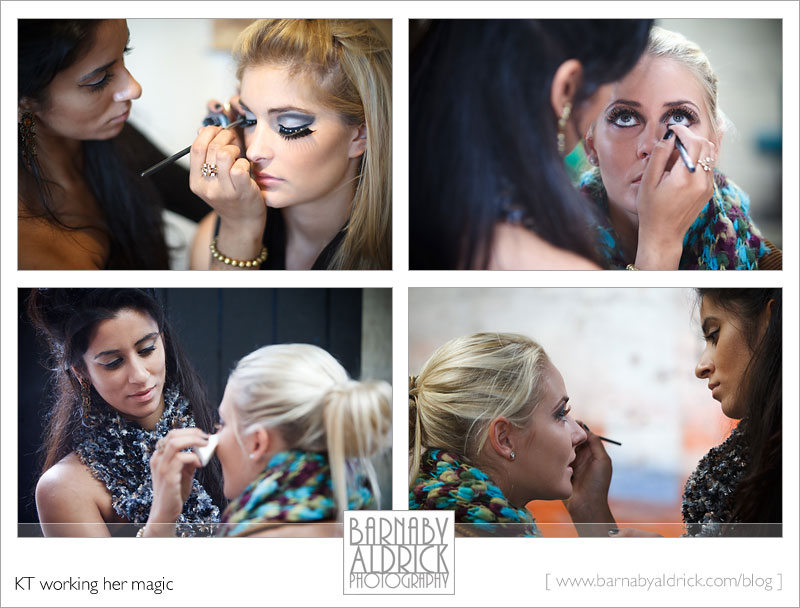 My blogs are generally a touch on the  L O N G  side, so to give your broadband a break you have to click ‘more’ below to see the rest.

So! Over to us to do the business.  “Yo Booker! How do I get these flashheads to flash?”

While Barber braved a working mechanics outside, I snuggled into a plain room to get my noodle round the studio heads.  I’d brought along a swatchbook of coloured gels and wanted to have a play with colouring the flash.  I was looking for to get a 70’s/80’s look for this one, with a cheeky red flash sidelighting things.  I faded things a bit in post with a Totally Rad photoshop action that simulates SX-70 polaroid film. Steph looks ace eh? 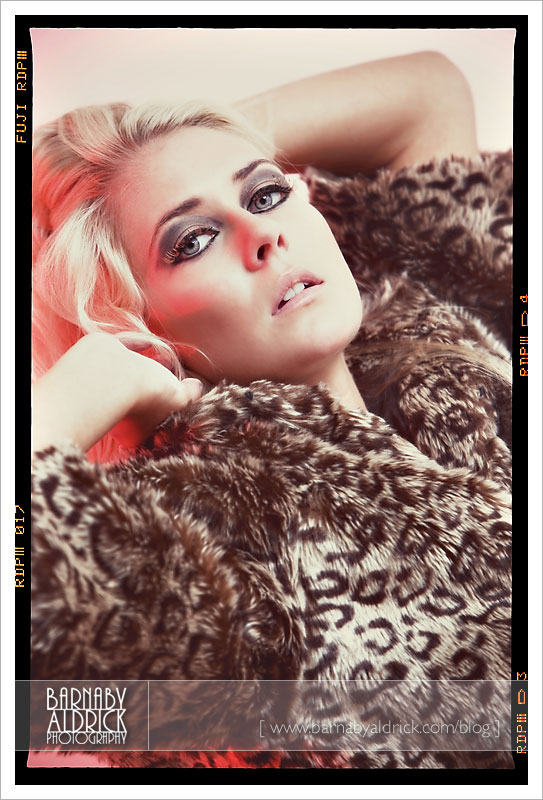 Next was a setup with Clare was courtesy of Cris, a la Damien Lovegrove (photographic tuition guru), shot with a single 580 flashgun, zoomed in and aiming down from above, for a directional quality. 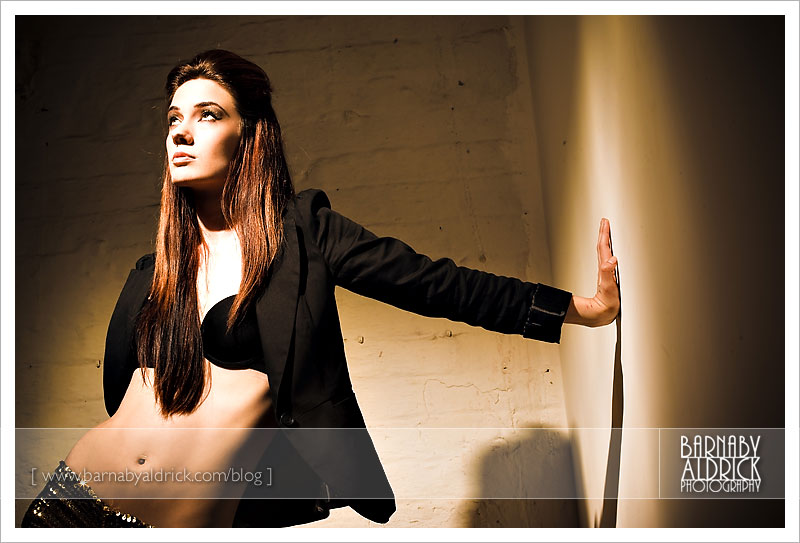 Back to the big heads (flash heads that is), I softboxed Matt with his guitar, Lauren.  He’d brought her and his £3 charity shot 3 piece suit along for the ride. 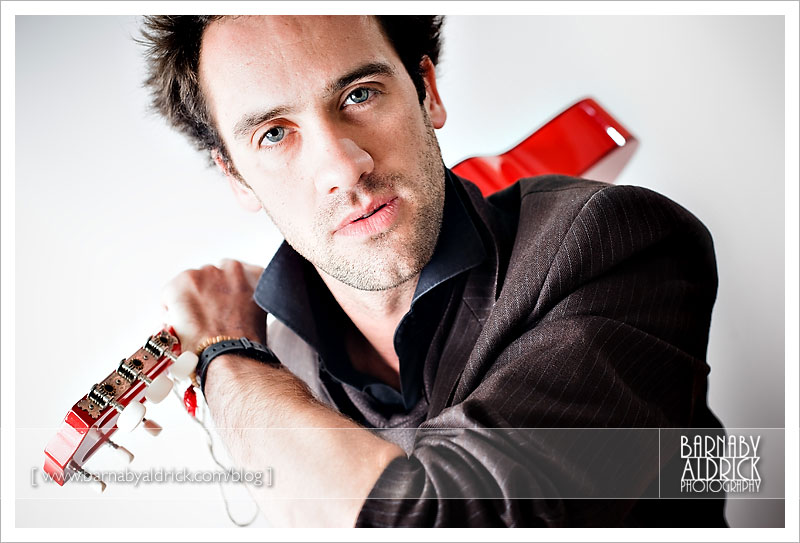 Lauren.  A fine name for a guitar. 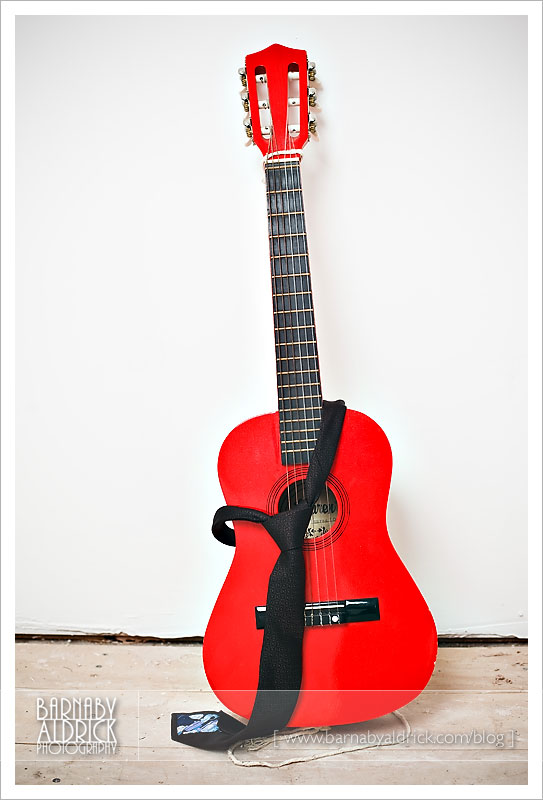 We found this ace grid behind a bunch of car doors and got our gang to hang off it, again with some gelled flashes. 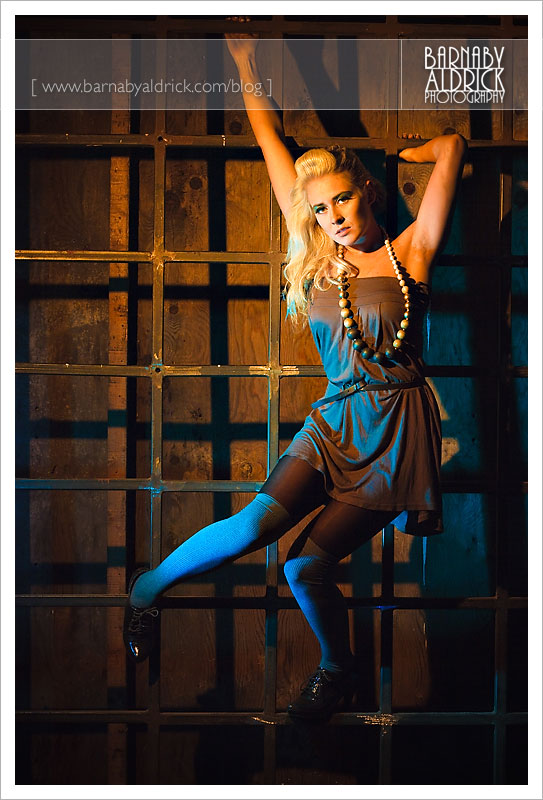 Next up is a 50mm crouch, looking up into a softbox.  I softened the skin with Totally Rad’s Pro-Retouch. 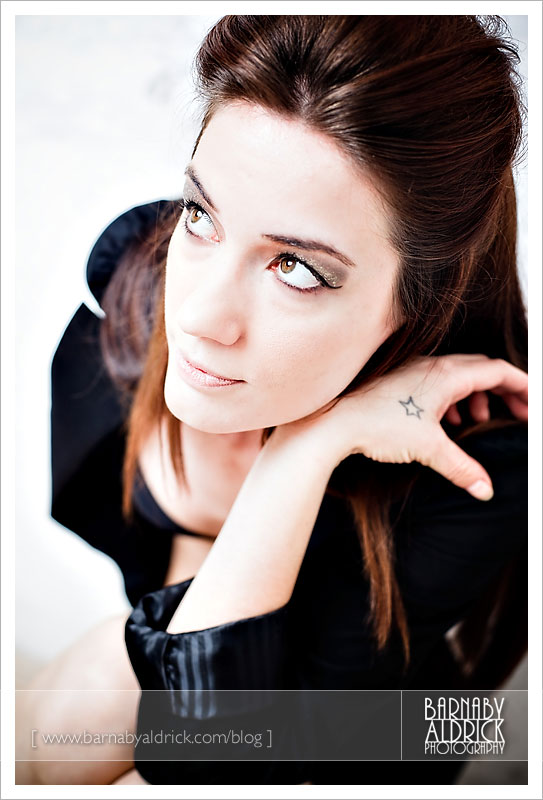 This one below was inspired by scenes in american films like Terminator 2 / Die Hard / Lethal Weapon, where the actor walks past cop cars with their lights going.  Again shot with gelled flashguns. 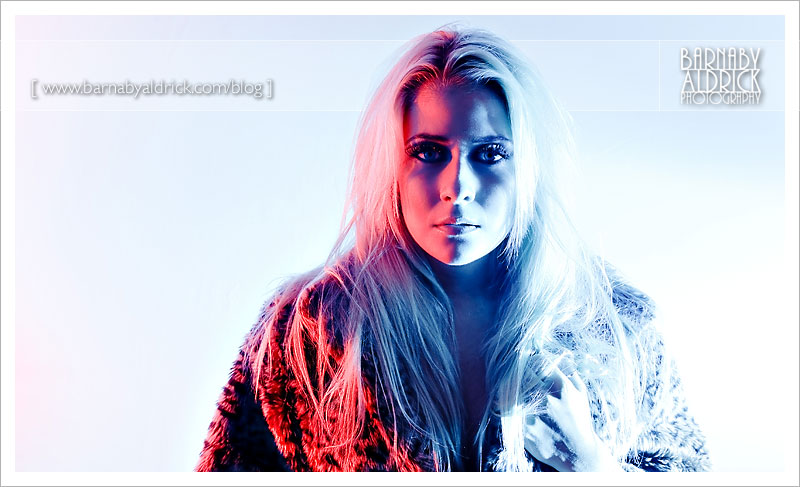 Matt came with a whole list of cool ideas, but one was to draw a cross where his heart is.  I like the storytelling element to it.  Take it, but don’t break it. 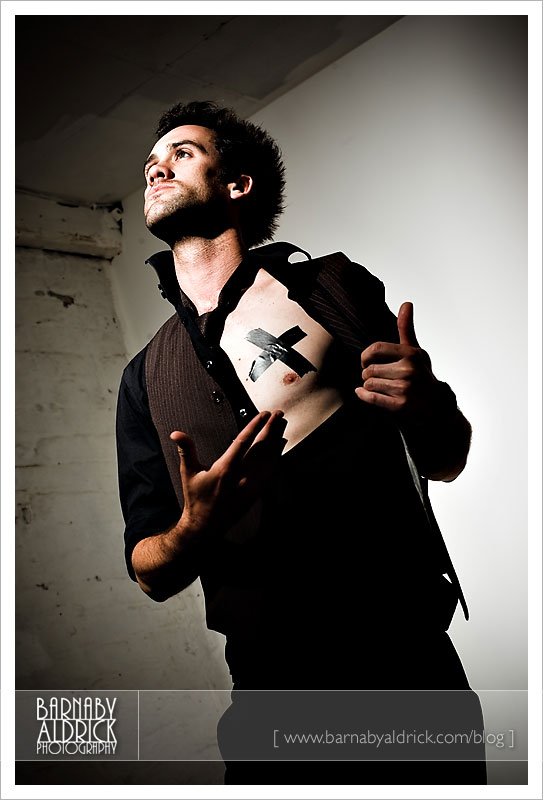 I processed the following grid shot of Matt & Steph to have a Bonnie & Clyde, circa 1930’s chic. Matt in the clink and Steph in for a steamy visit. 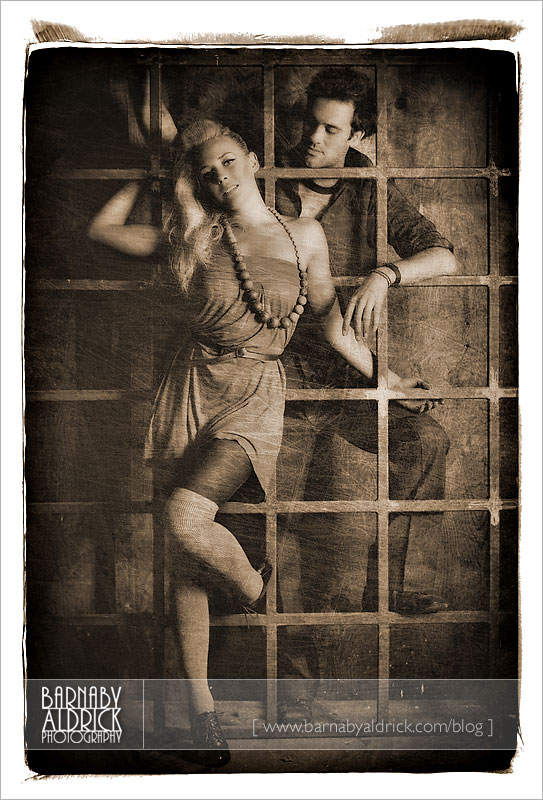 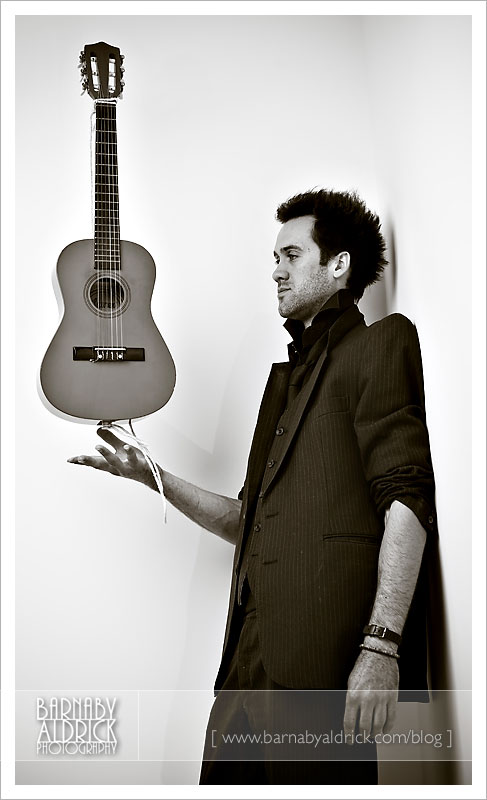 I like the clean modelly feel to this next one of Steph.  The makeup looks mint and the backlighting on her hair and shoulders adds depth to the studio flash, but most of all I really like the fact that this was shot on Phil’s SPENDY 85mm f1.2 and her eyes are lovely & crisp and everything else is soft and buttery. 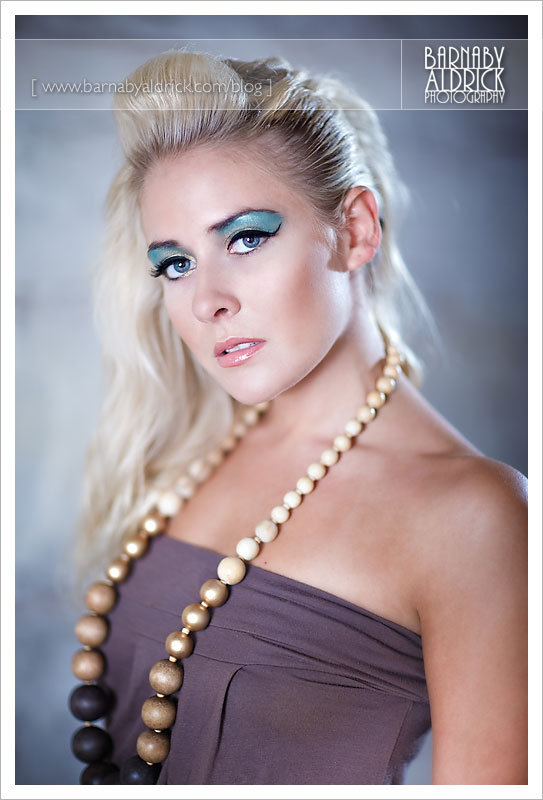 Same location & similar setup of Clareski, but down low in funky boots. 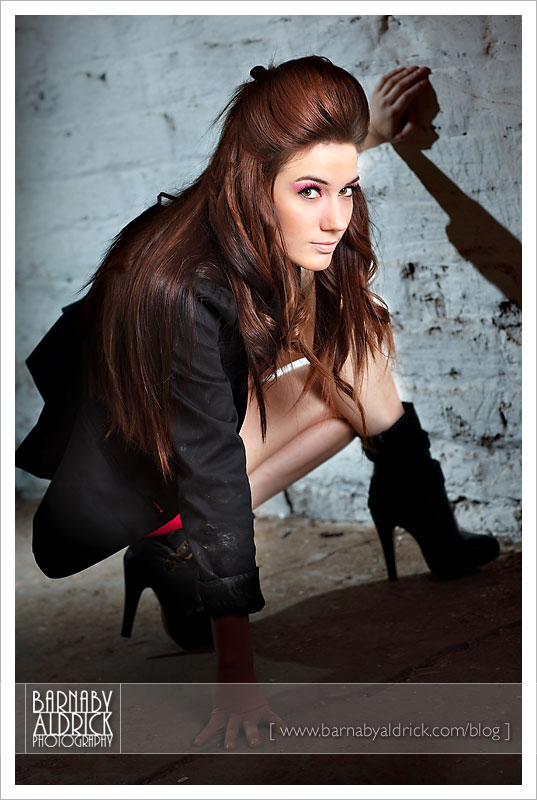 I really like this one of Matt.  He’s a gifted artist & front-man, and has been writing songs for years, but has stuggled along that path and I feel this sort of tells that story.  Title? ‘Matt, Lauren & perseverence’? 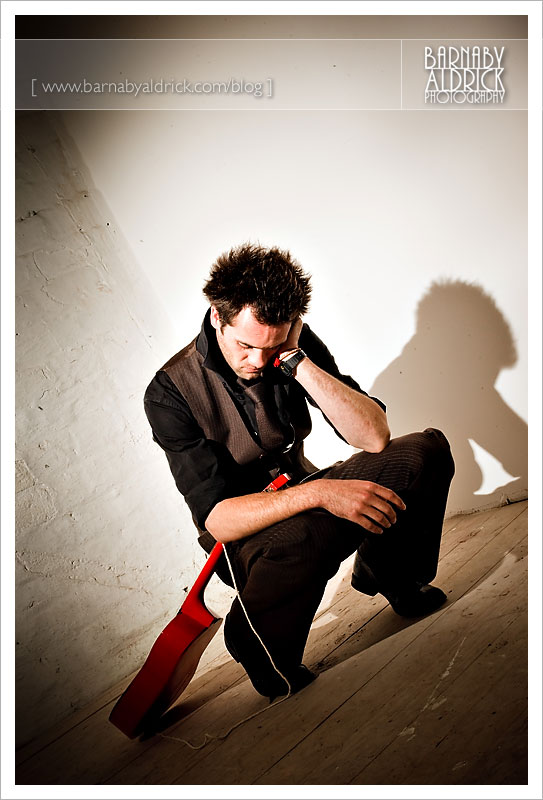 This could be the longest post ever, so I’ll chuck some remaining faves into a gallery below:

I had such a wicked time and it just goes to show how much can be accomplished with the right peeps at minimal cost.  Everyone came with the perfect headset bringing all sorts to the table (more than we had time even to shoot).  Our models were professional, fun & patient, Katy & her assistant were total legends, Cris turned out to be a walking flash resource, & as usual, Rob & Phil had loads of fun while getting stellar images that make me always wanna be better.

Hopefully we’ll be doing this not only again, but on a regular basis! As they say: flash is a dark art.