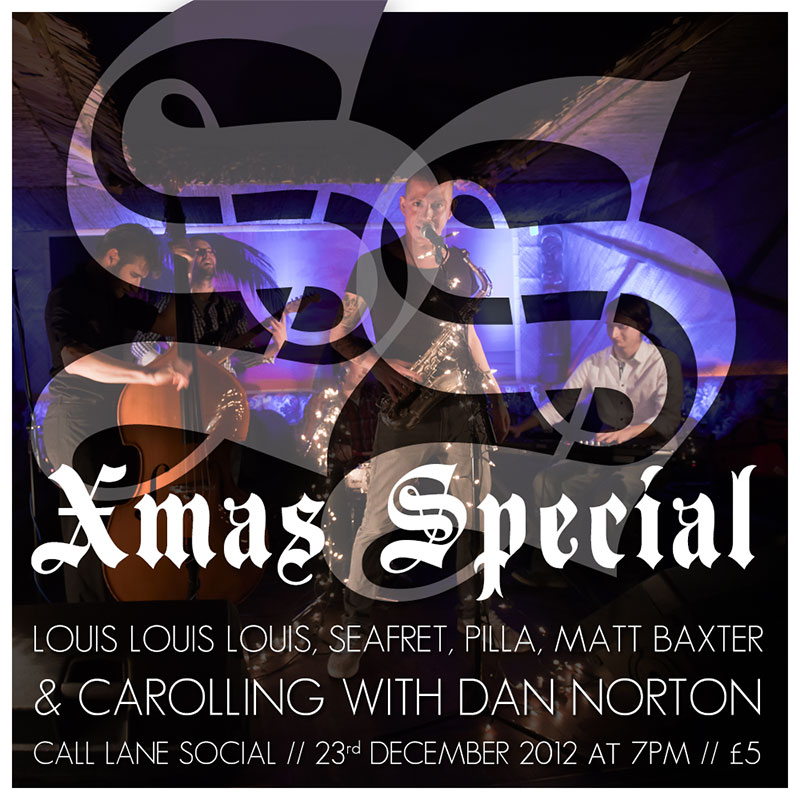 The festive Sunday Service is one of my most favouritist things about the Christmas season.  The SS is a gig night I run on-and-off through the year, showcasing three ace bands from near and far, at Verve Bar in Leeds.  The Christmas Special is always a highlight of the year, as we ask back our fave bands to play + lay out a festive cover!  Add that to the festive hats and knitwear, mince pies, mulled cider & humbugs and it makes your heard swell it’s so Christmasy. 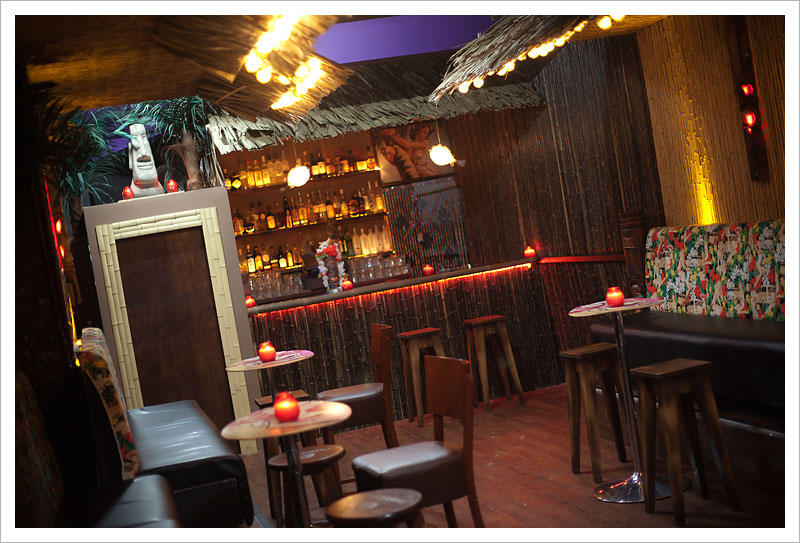 The Tiki Bar adds a bizarrely tropical vibe to the festive proceedings. 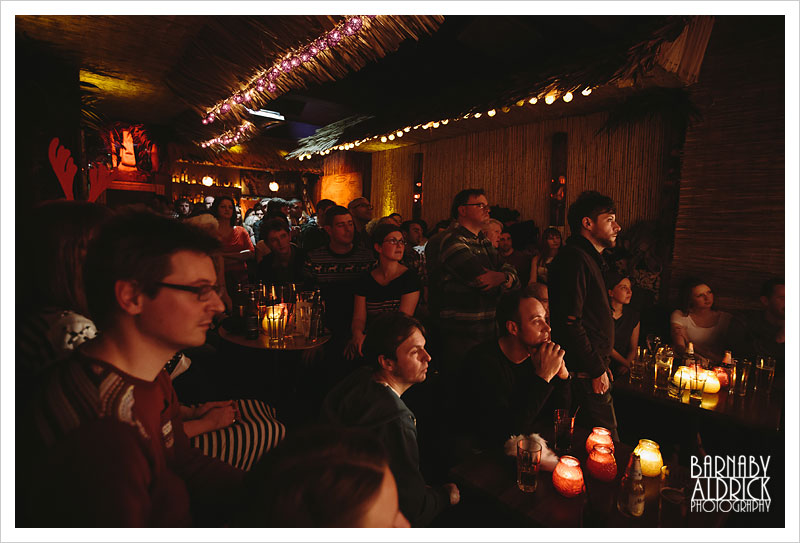 It was great to see so many revellers there in support of this Charity night, raising money for the amazing work they do at Wheatfields Hospice… 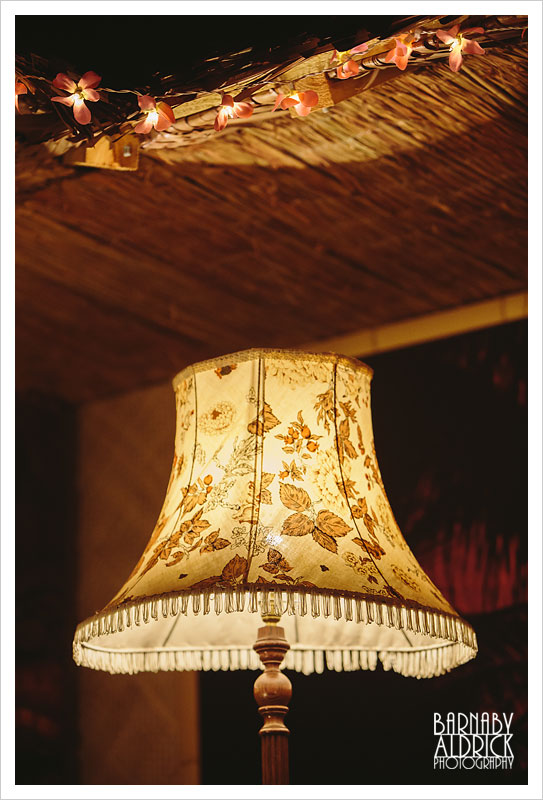 Once the Sunday Service lamp was in place… 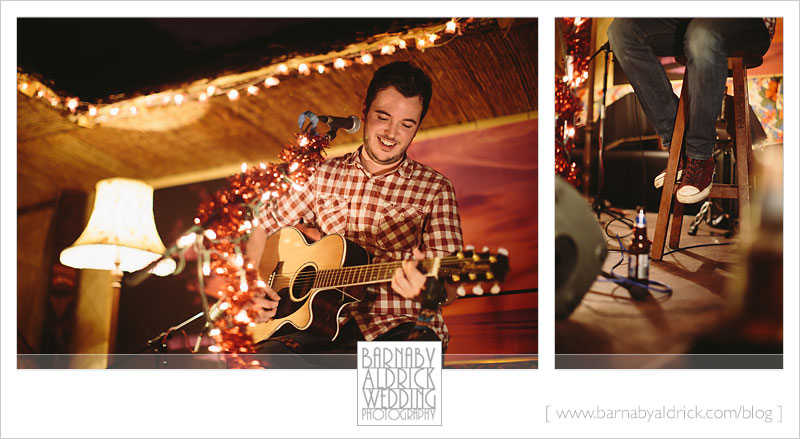 …Matt Baxter opened up the night! 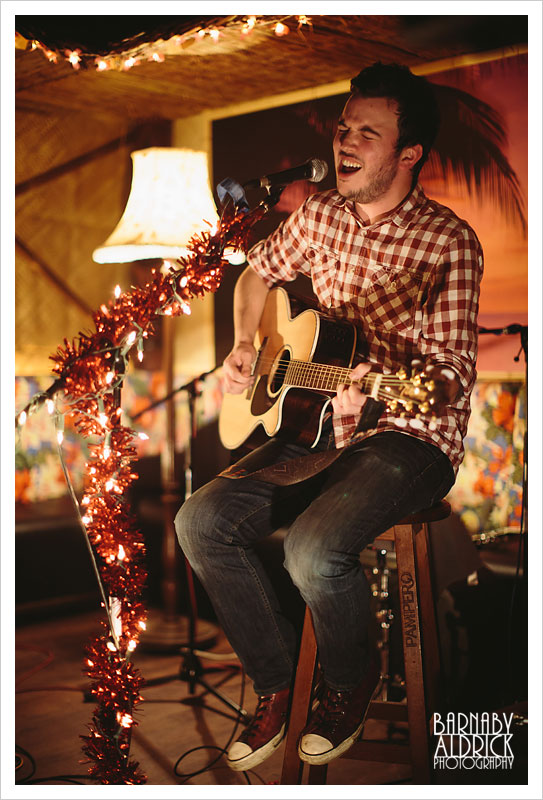 Once half of the very excellent Mojo 57, but has spent much of this year playing guitar for the massively up and coming Scars on 45 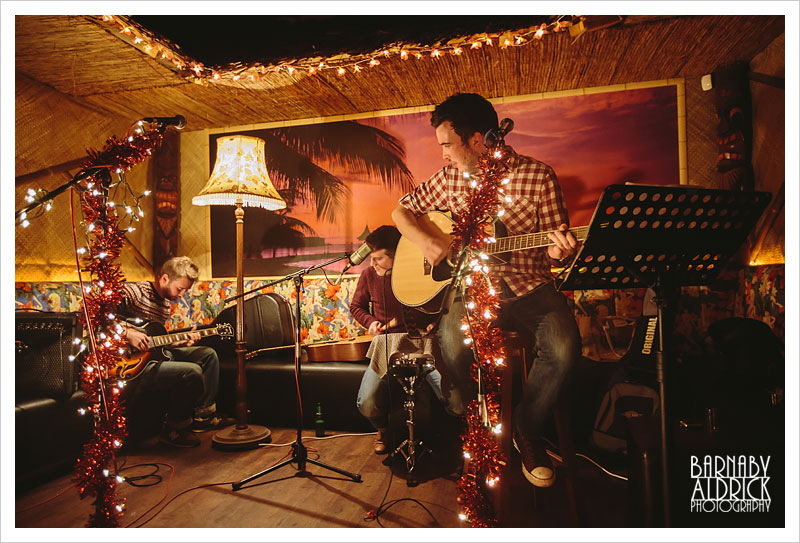 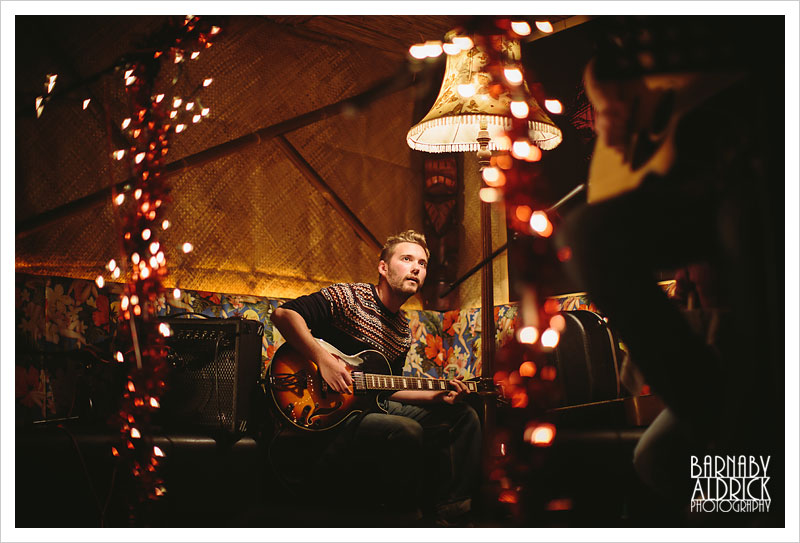 I like this one of his pal on guitar 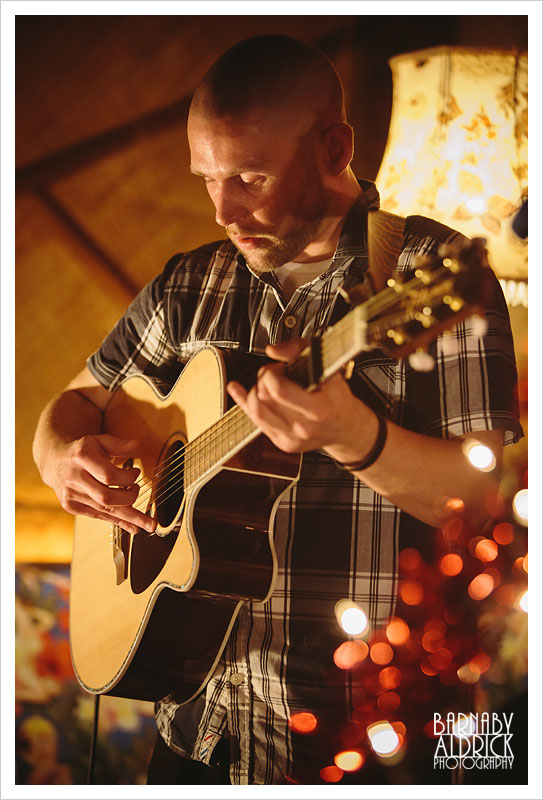 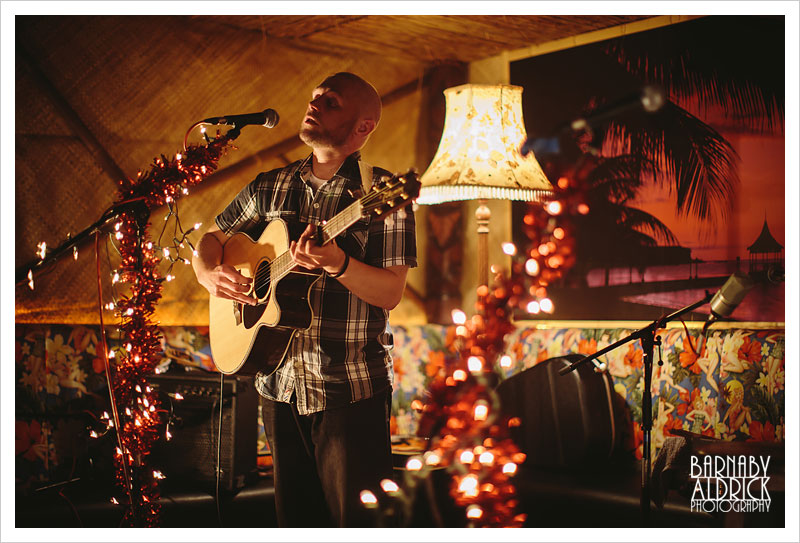 I simply can’t get enough of this guy’s tunes – check out his soundcloud here.

He’d also written a Christmas track especially for The Sunday Service and he asked me to jump up and sing the harmonies! 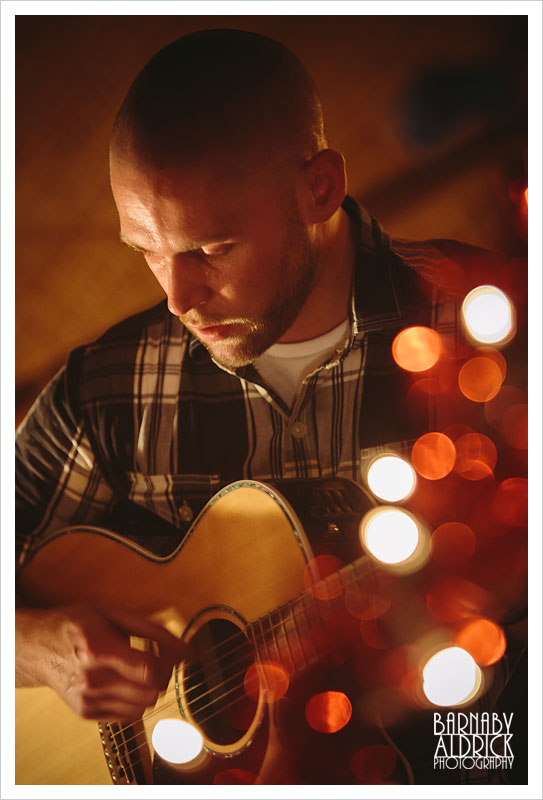 He wore a fine pair of Reindeer ears for his Xmas track, but as I was up too, I sadly can’t shame him with any images! 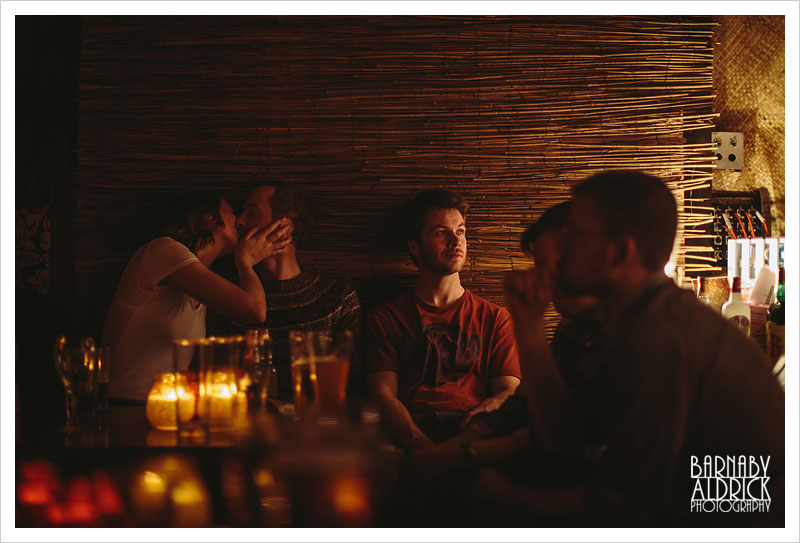 It’s always nice to put on a night and see my buddies enjoy it.  I like this little catch of Rory, Reeko & Crabby enjoying the tunes while the Kinseys have a smooch. 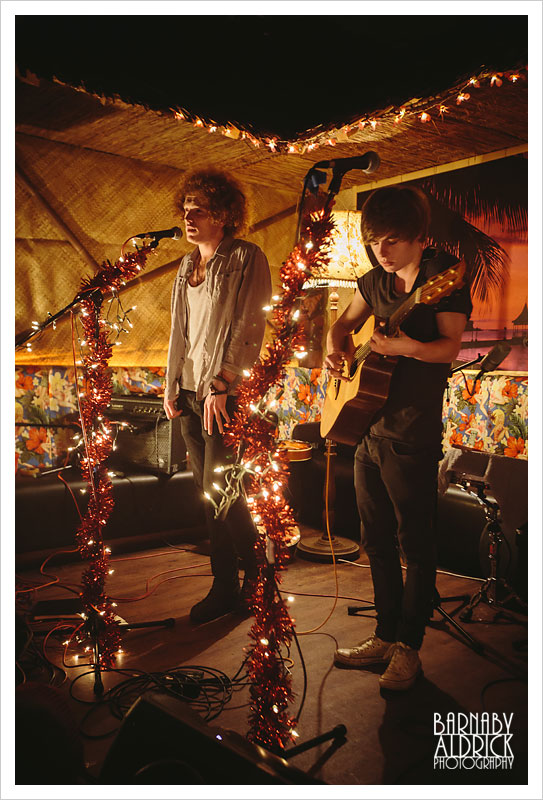 The next act up was the brilliant Seafret, who’d been recommended highly to me and kindly came all the way over from Bridlington! 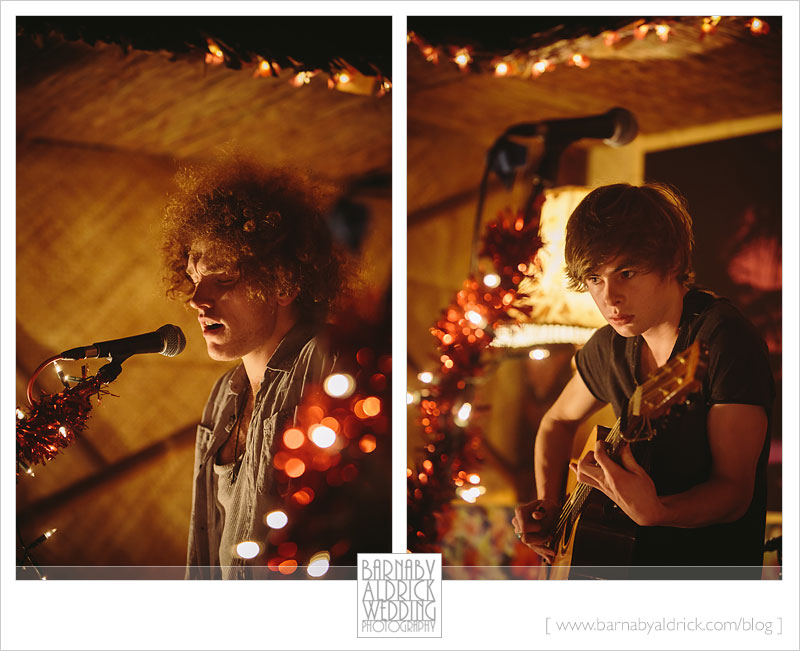 Jack and Harry were seriously impressive 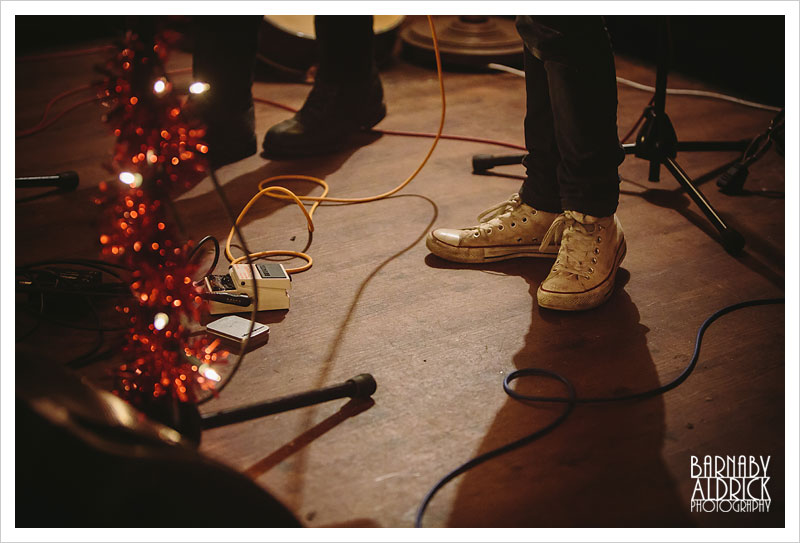 It’s customary for me to photograph musicians feet 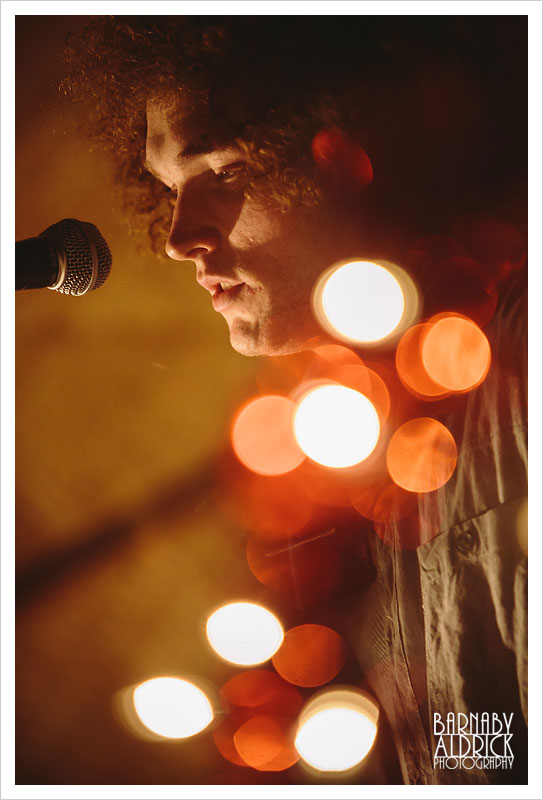 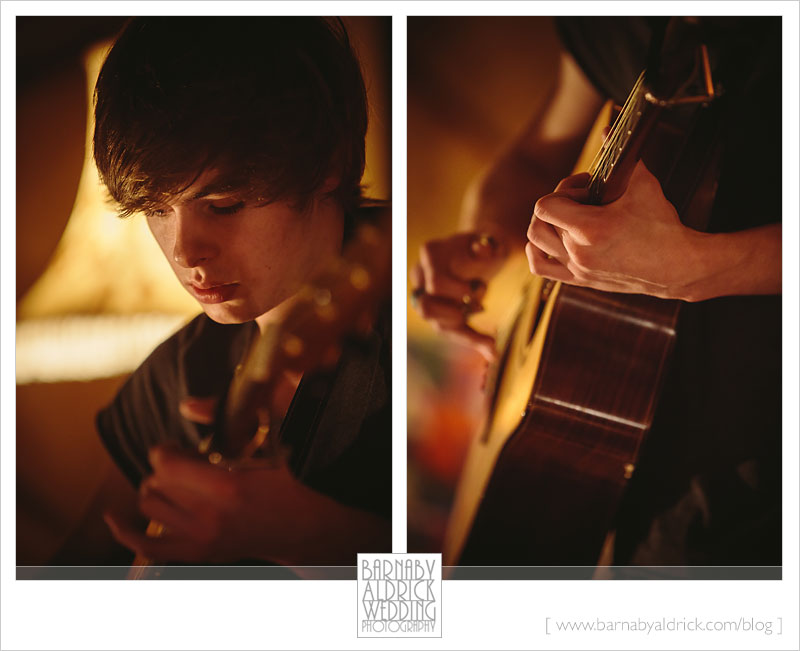 And Harry, only 16, has some ridiculous skills. 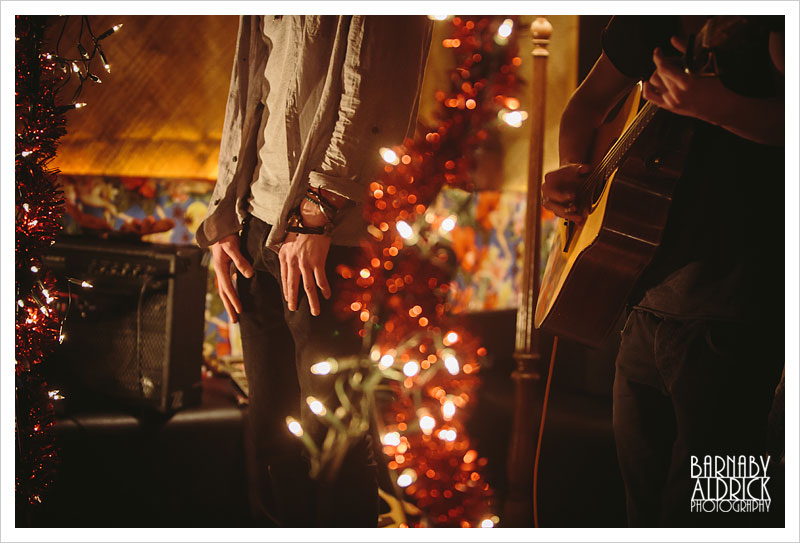 If these guys are playing near you, do check em out. 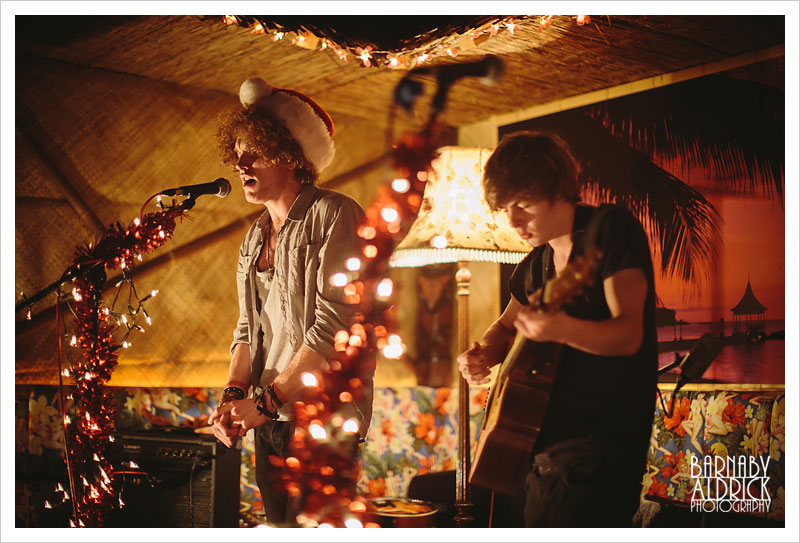 They too laid out a festive cover, a Jonny Cash Christmas number and we bullied Jack into wearing a santa hat! 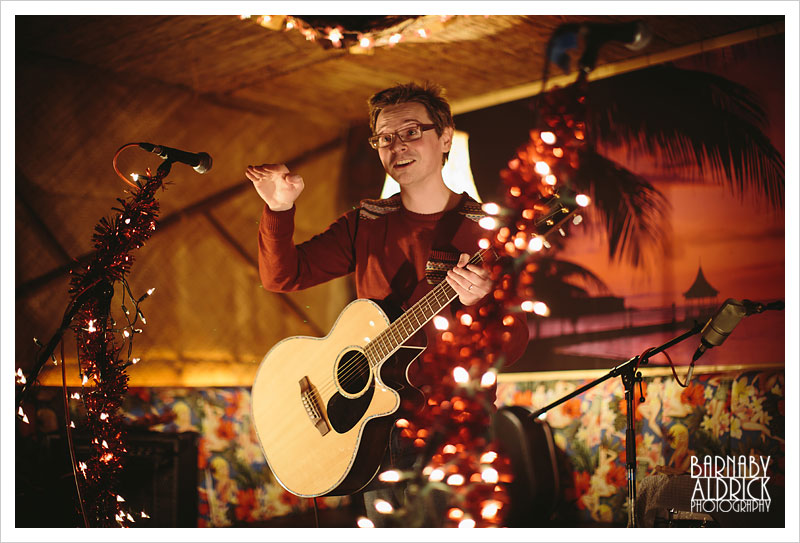 As is also customary at all our Sunday Service Xmas Specials, Dan Norton, the man half of Man & Wife (who play songs in the key of wife), came and cajoled the audience into singing carols. 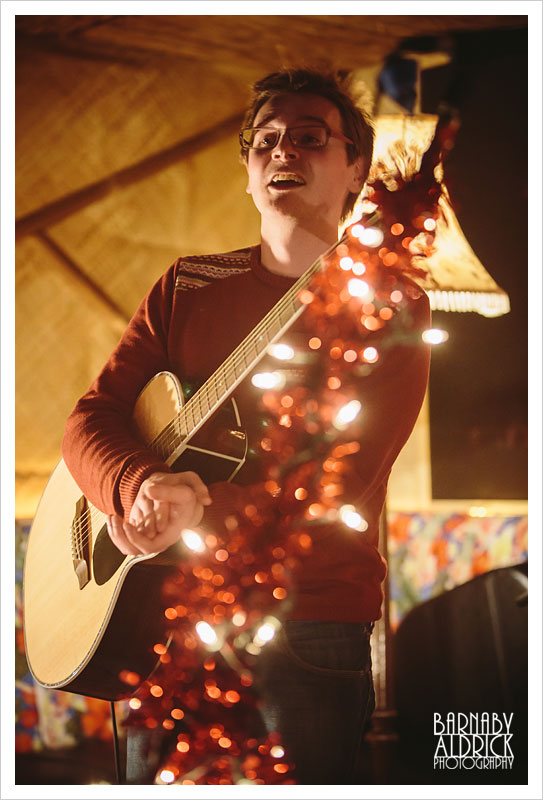 As usual it became a complicated, farcical mess, but much fun was had all round. 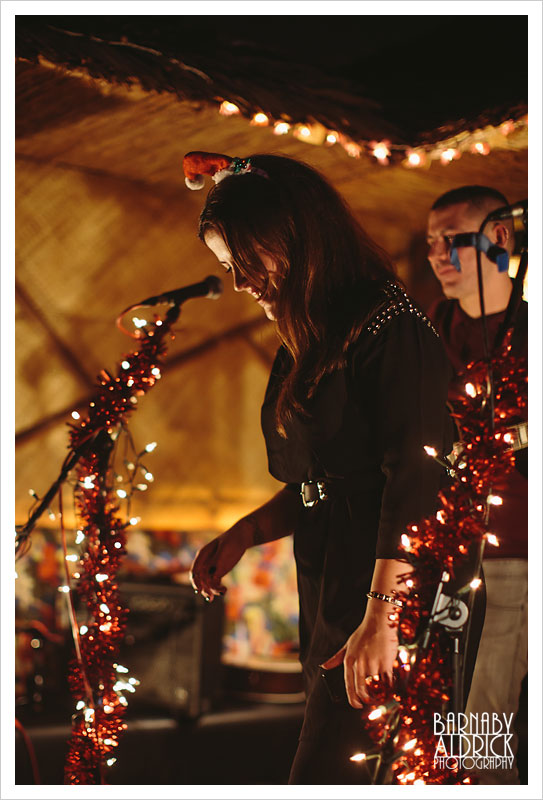 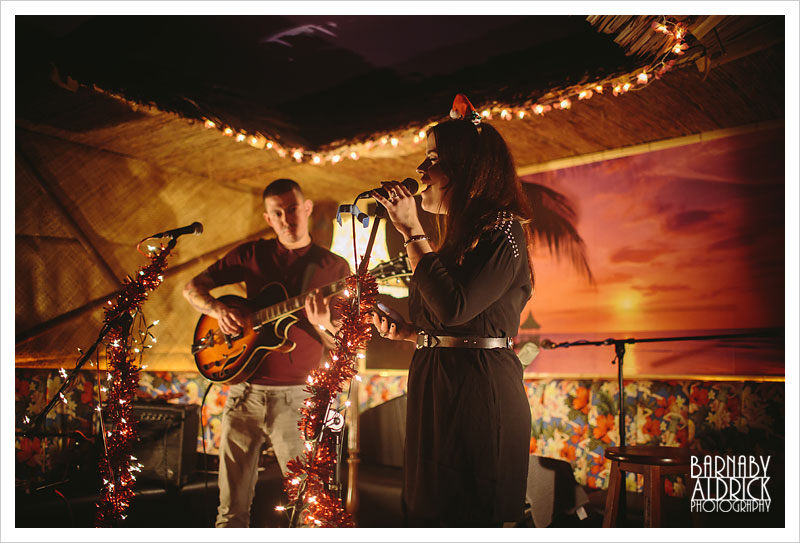 …and with Sam Thornton on Guitar, she sang a delightfully impromptu, husky cover of ‘Have Yourself a Merry Christmas’ a la Ella Fitzgerald. 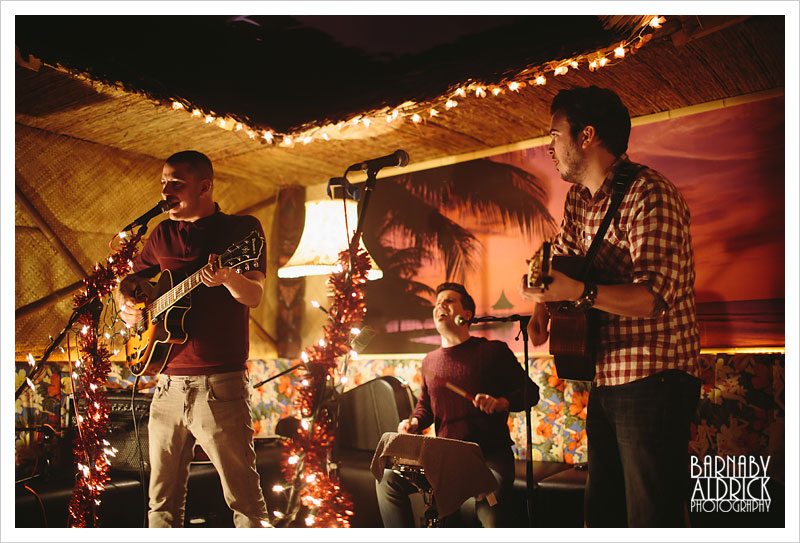 The final act to wrap up the night was the amazing Louis Louis Louis!  Sadly two members of their usual lineup (double bass & keys) couldn’t make it, so Mr Baxter jumped up in support. 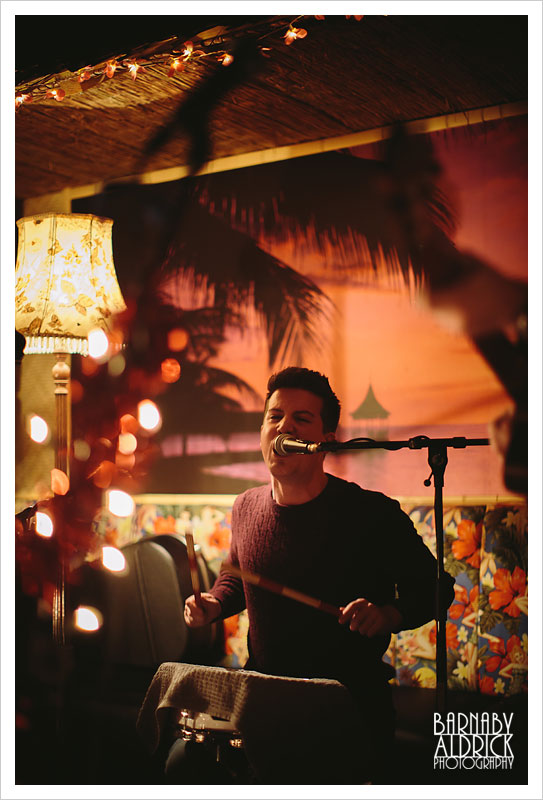 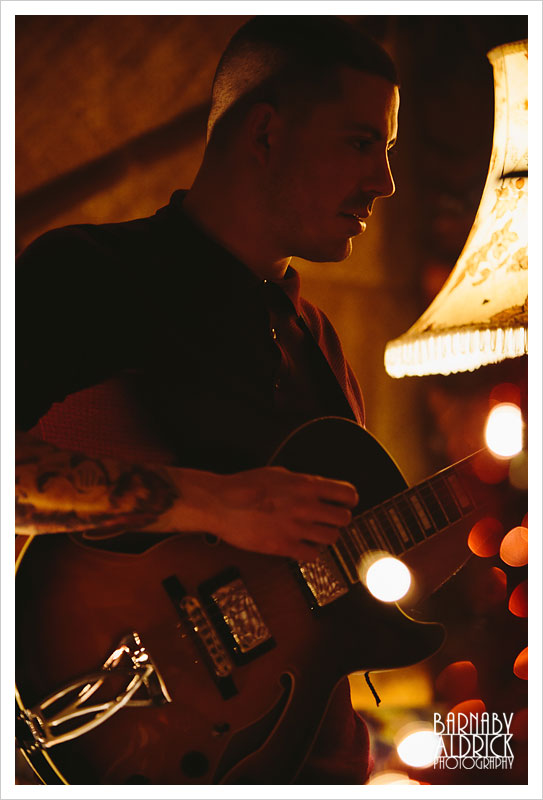 I rather light the lighting casting a nice rim on Sam’s face in this one! 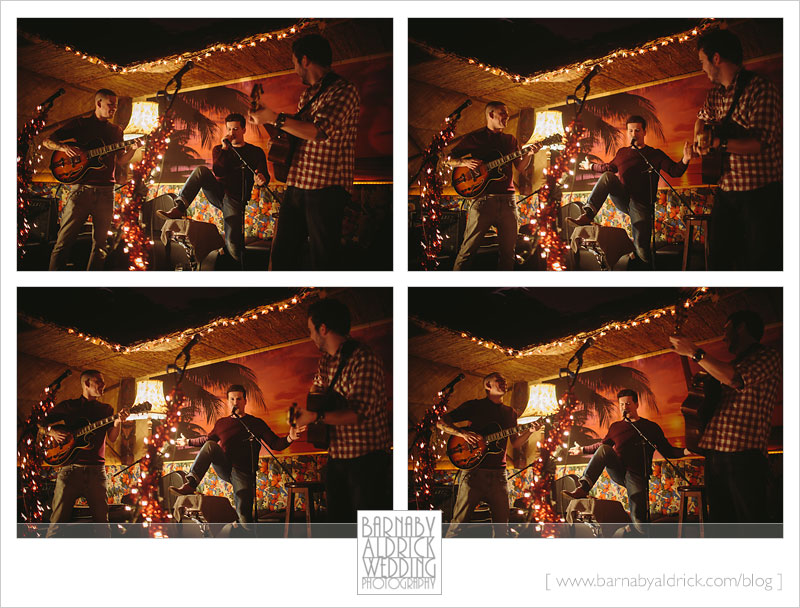 Not only was it a brilliantly Christmassy evening, but after the entry fee and raffle were counted, we managed to raise £640 for Wheatfields Hospice!  Amazing!  Thank you to all the bands and peeps that made this happen!

Can’t wait till next year!