I was out on Leeds Guide duties today, shooting features for issue 234. What are the odds that the day I photograph a famous Saville Row tailor in his favourite £3K suit, that I leave the flat in a dash in last nights mud caked jeans?

After shooting the tailor in a fancy Leeds Restaurant, I bounced off to snap a chaps city flat, swung by the excellent Sandinista to photograph (& eat) an amazing Mediterranean seafood stew for the ‘Chef Special’ feature, before heading off to the afternoon’s Curry Awards, to document (& again, eat!) the best starters & main course curries Leeds had to offer.  The legendary Howard Marks was one of the judges there too.

I’ll post 234’s pix when they’re processed, but today reminded me how cool it is shooting magazine features; so thought I’d dig into the archives a bit and drop a few LG faves for your delectation…

Including this one below, which was the first image I had printed using my 16-35mm Canon lens. The feature was a ‘City Living’ article for a dude who lived above the Body Shop.  His flat was a tip when I dropped round, and I spent half the time tidying his kitchen. But I love this outside shot showing Leeds in Sunshine & reminding me what ace civic buildings there are when you look up. 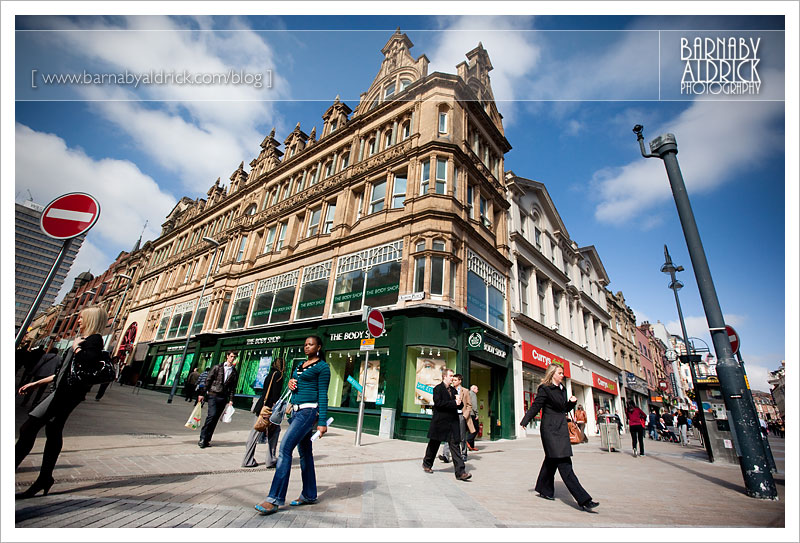 Further down Briggate, Leeds’ High Street, this telling scene caught my eye off brief, but was run for a feature on the credit crunch. 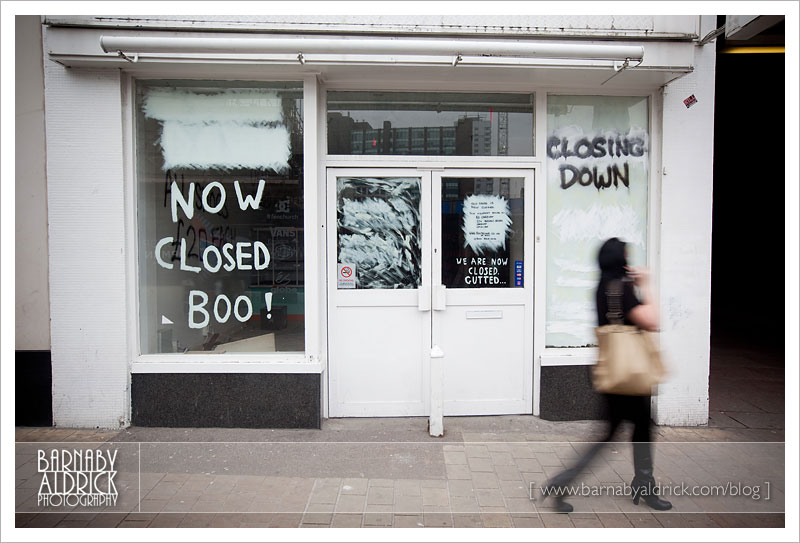 One issue a while back we did a feature on Leeds’ independent fashion scene.  This girl is Julia D’Albert, a homegrown haute couture designer who also happens to be my best mates sister. She’s an absolute star and for the feature, rocked up down the old Granary Wharf in her leopard print leggings & homemade jacket for a bit of off camera fun. 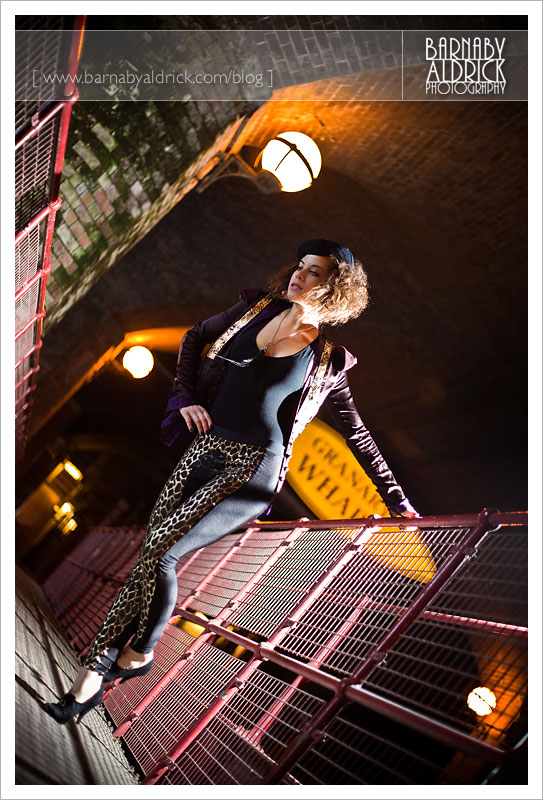 These dudes were modelling ‘Flying With The Fishes‘ clothing, and we thought it’d be cool to shoot them in the Hyde Park skatepark.  I shot a bunch from the same angle, while boarders & bikers zipped about, and comped this lot together. 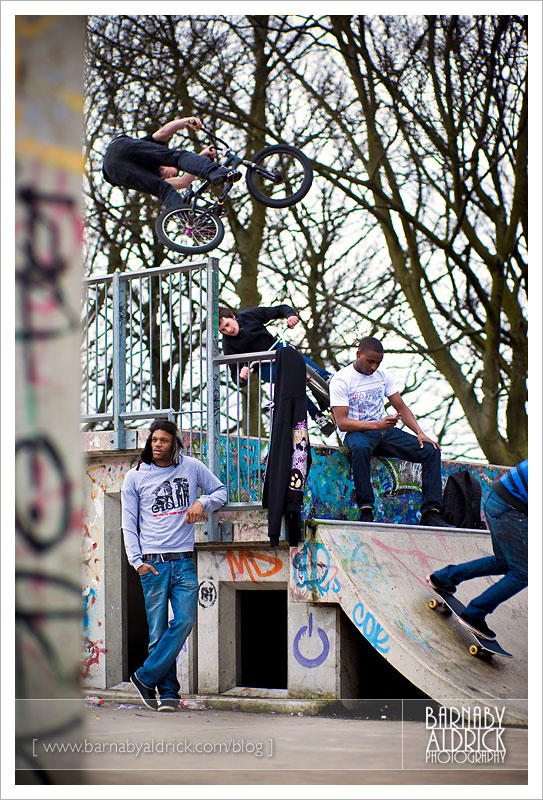 This was a shot of a model looking amazing in one of Dawn Stretton‘s creations on the Leeds Centenary footbridge. 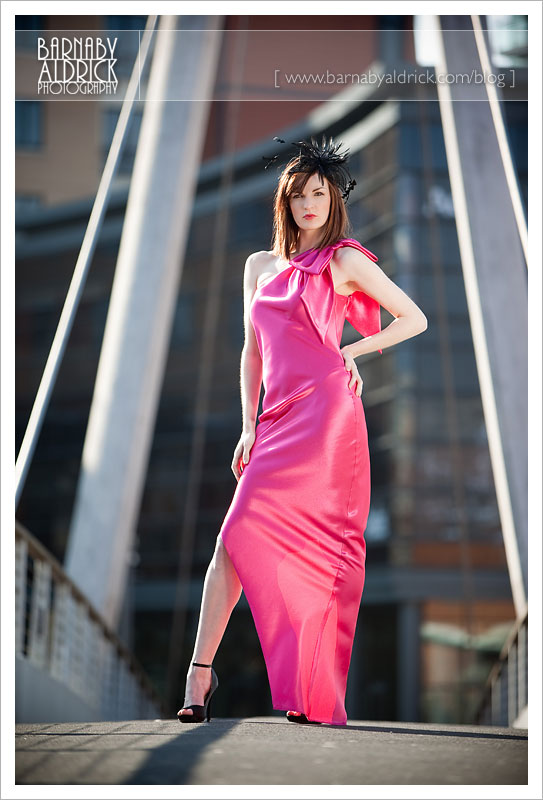 I think this shot below was an interview about Leeds fashion with a chap who works at the designer shop Reiss.  Again, I comped a bunch of longish exposures together while our man stood very still in the middle.  I love the Victorian architecture down the County Arcade. 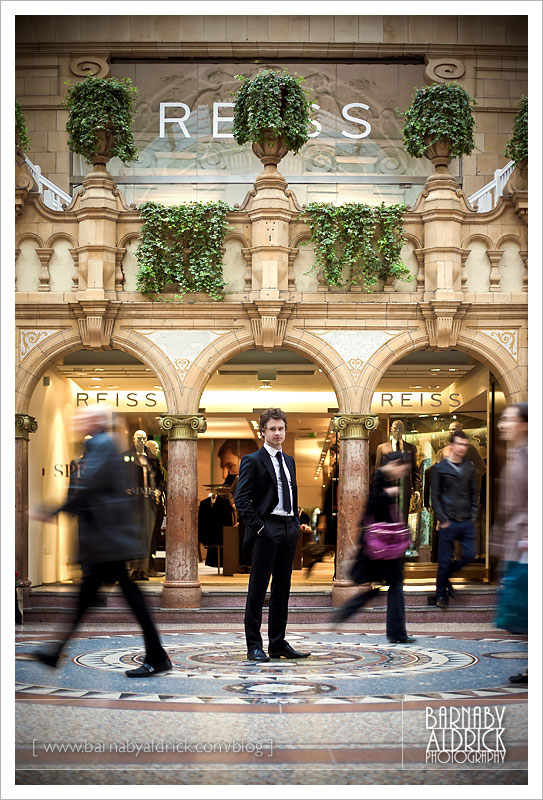 There was a feature on Live in Leeds a while back, and I submitted a pic from my Sunday Service night of the amazing Dan Wilde. I added a bit of a scratchy texture to it in post to add to the sepia vibe. 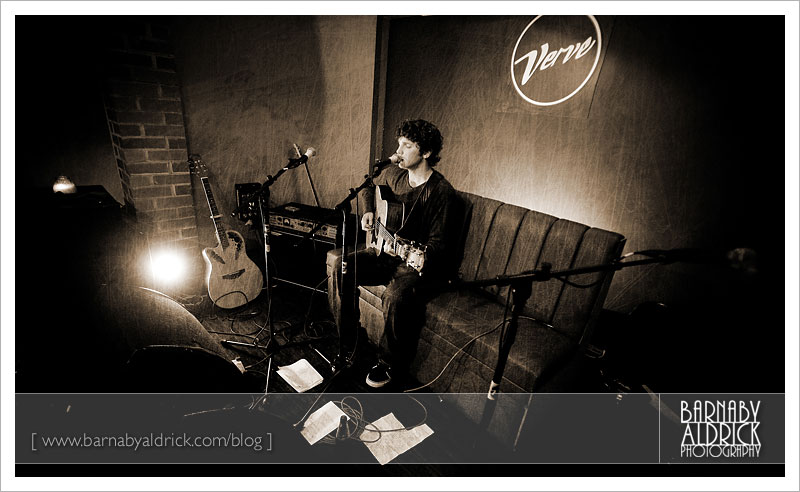 One one issue I was given two bottles of Tequila and had to make em look interesting.

I shuffled off Oporto’s, a cool Leeds bar that plays rock for guys who want to look like rock star cowboys, and they supplied the props & backdrop. The only extra tools I used was a reflector to bounce the overhead bar spot. I love the softness of light and depth of field. Looks to me like I shot this on the 70-200 @ f2.8. 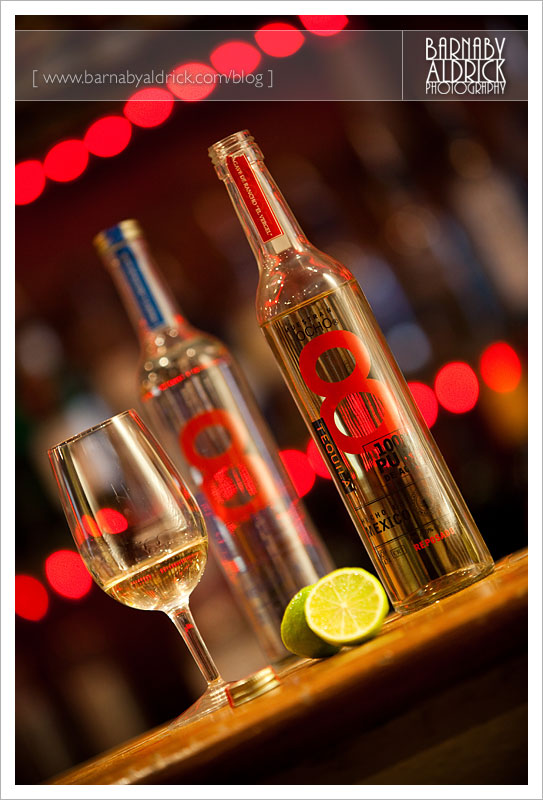 Finally, I was at Bar 166 in Horseforth (an eatery worth the trek from town) to snap a ‘Chef Special’.

Food photography is a challenge to get food really looking appetising. I’d hate to do it for a living, but when you get it right it rocks. 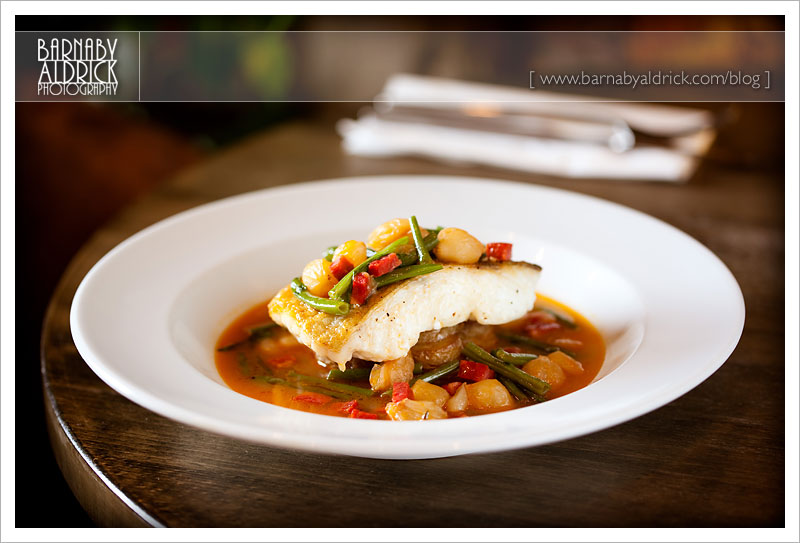 Especially when you get to nosh it afterwards!

I’ve said it before, but I should get a T-Shirt that says ‘Will photograph for food’.  Tell me if you see one!