Last weekend I was down in London to shoot a few pre-weds for upcoming London weddings.  In between I had a lovely time catching up with various buddies I’ve met along the way.  I stayed with pals Rob & Nicky (who’s wedding I made the movie out of) and we went out for an amazing Italian in Wimbledon that served pizza’s as big as your table.  The next morning I met Katy, an old pal I met when I volunteered in Bangladesh once upon a lifetime ago.  Since we last met she’d borned a new baby boy called Thomas, who’s now 10 months old. 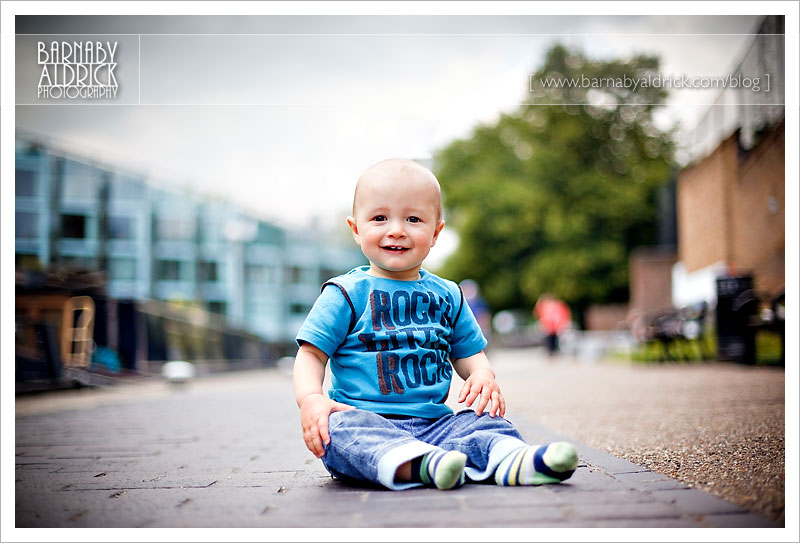 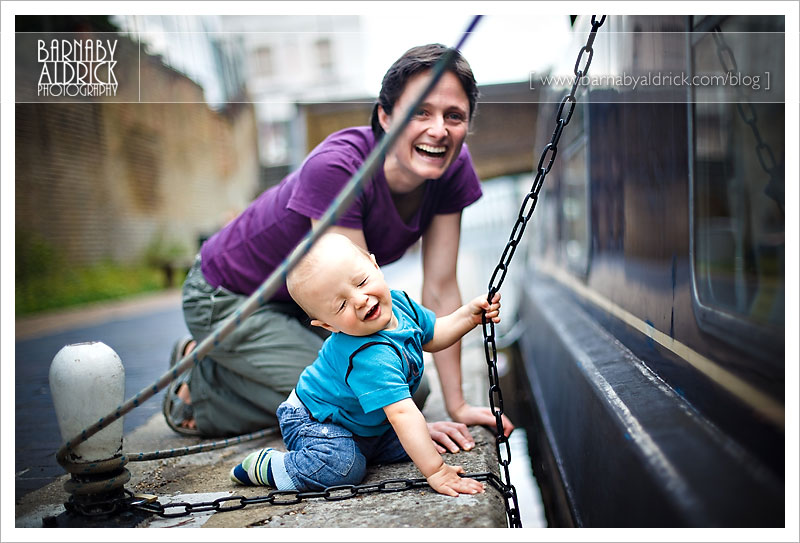 Here he is with Katy messin about on the river! What a dude. 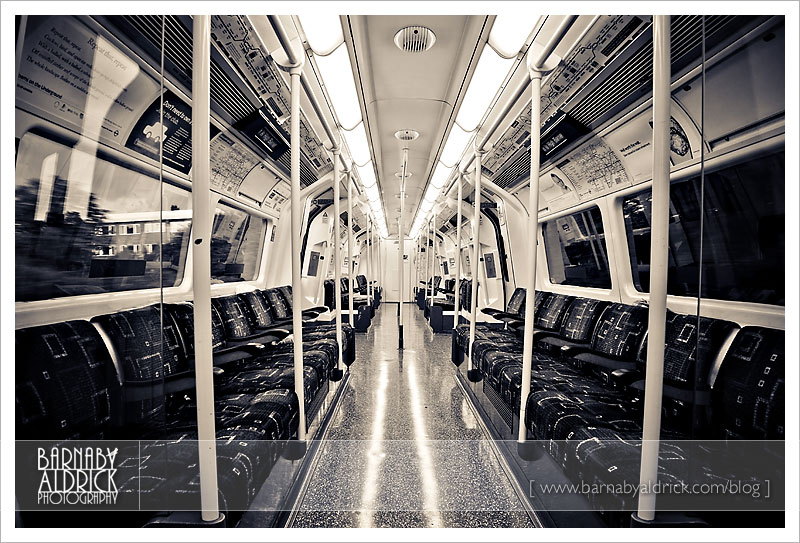 Later I was on an empty tube! Bit 28 days later… 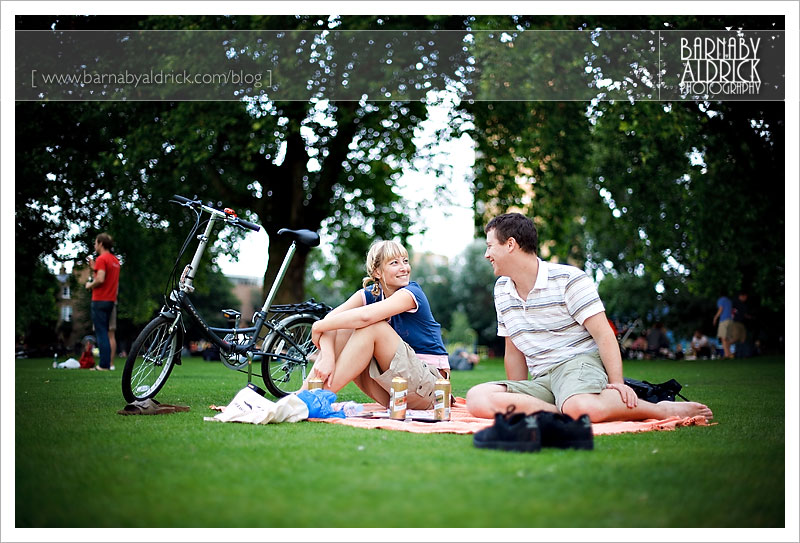 On Sunday I hooked up with my ol’ pal Richard Marsh & his fiancée Ann-Sophie. We took a couple of beers to the London Fields park & hung out.

While Ann-Sophie was off on her bike he asked me if I’d shoot their wedding in France next year! It sounds wonderful, and they’ll fly me out for a couple of days to take in the Alsatian hills. Destination weddings rock! 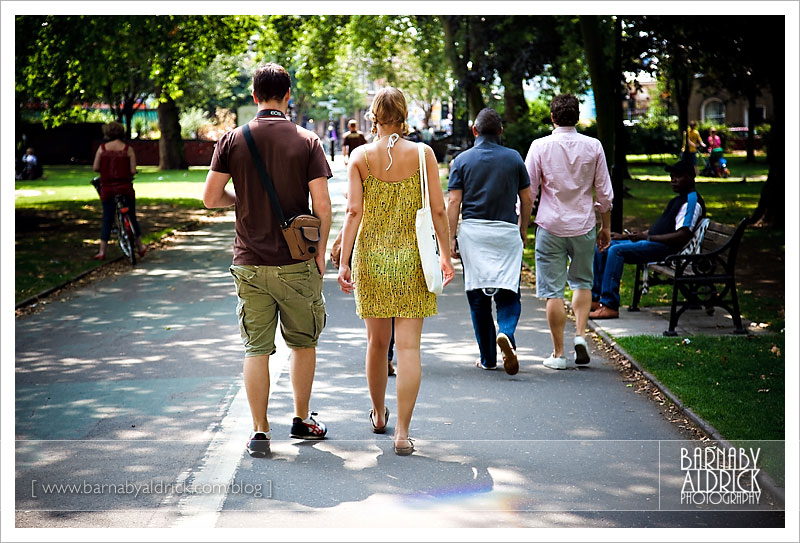 The next day we put in the miles on foot, taking a turn round some fab London Sunday markets… 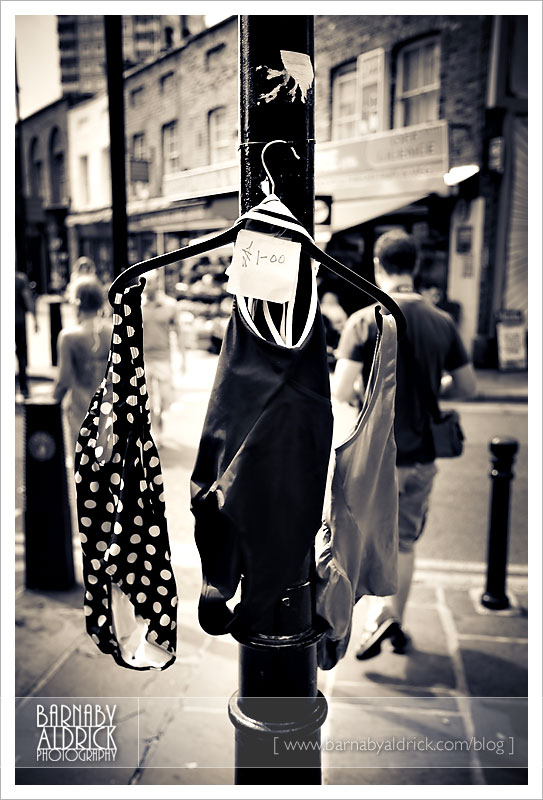 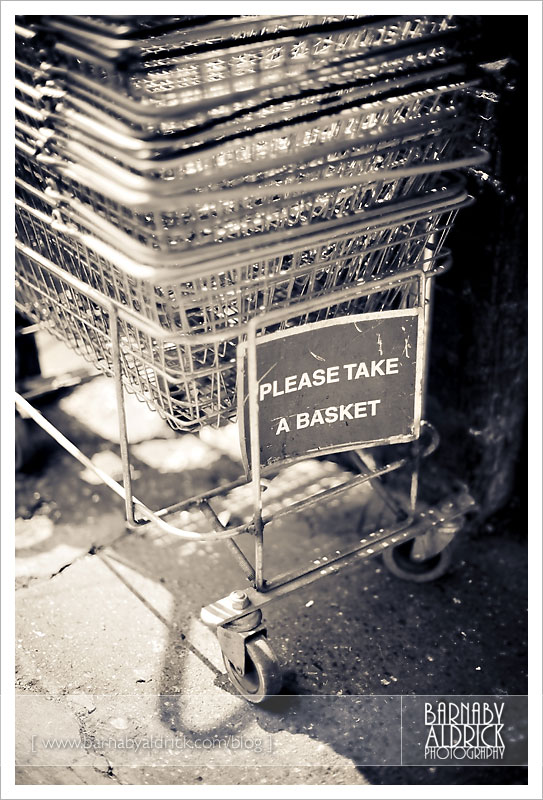 And they say nothing’s free in this world. 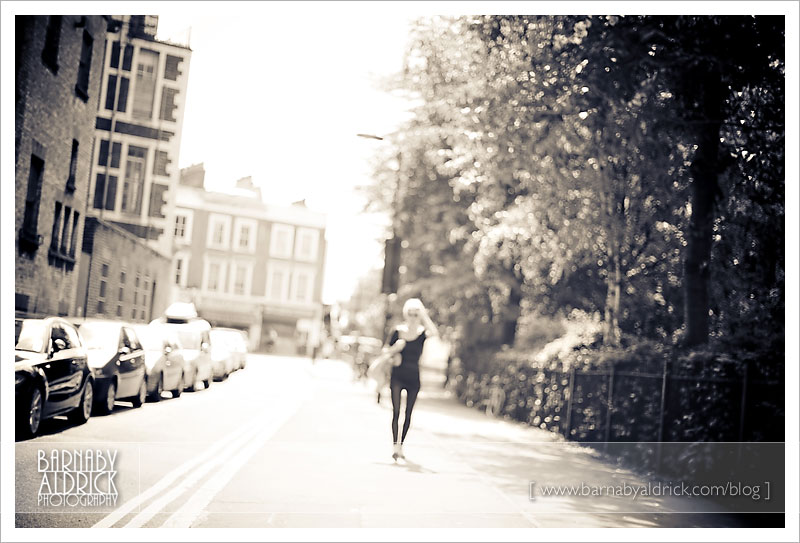 Shooting from the hip, out of focus, on route to Columbia Road Market.  I kinda like it. 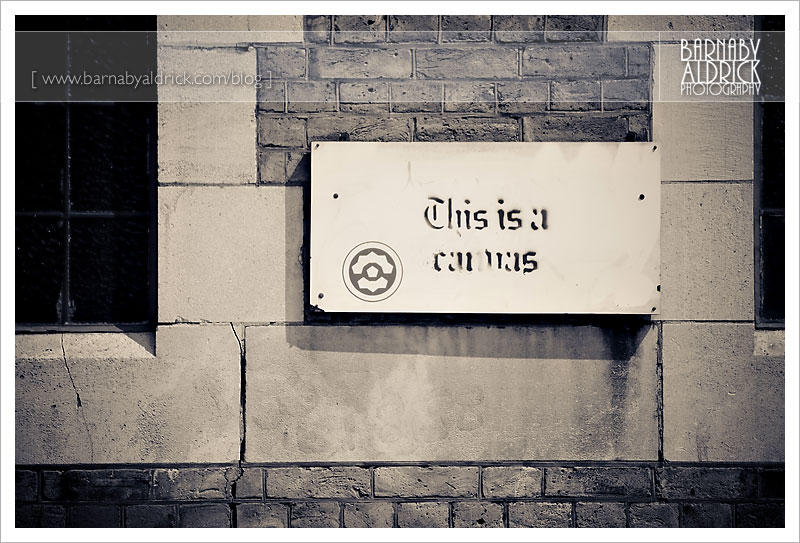 There is lots of Banksy inspired art around.  ‘This is a Canvas’.  Underneath, I should’ve written ‘This is a photograph’. 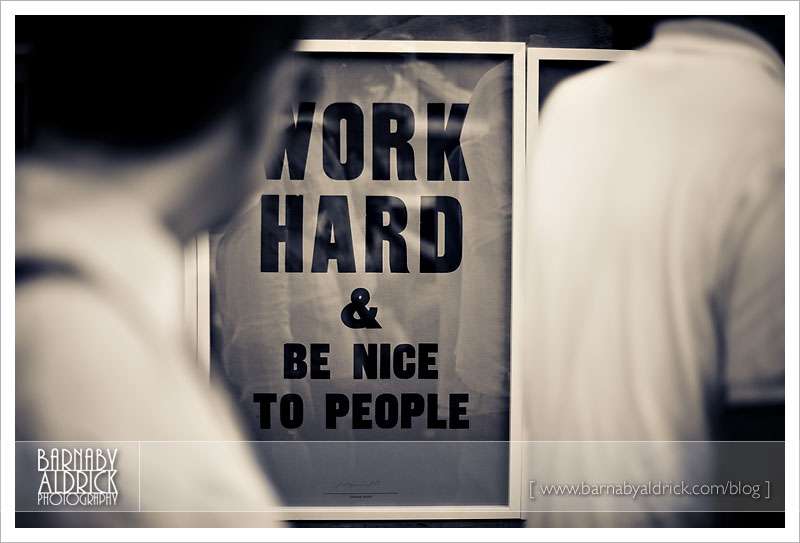 This is a good motto. 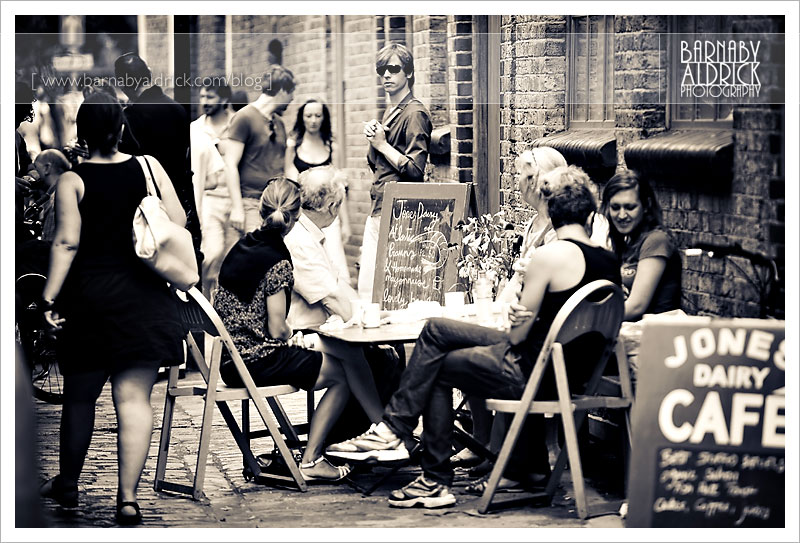 I like the fact that round the London Markets, it all happens on the street. 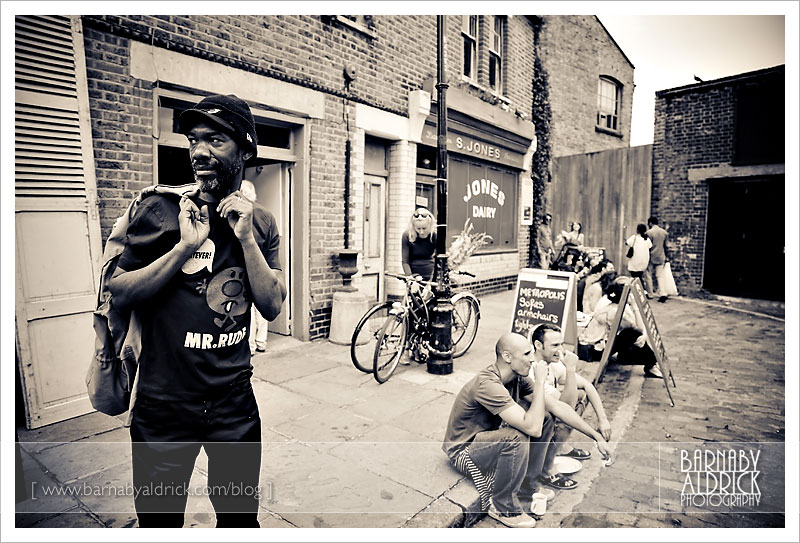 This steal has a street photography vibe, on a side street down from Columbia Rd. Mr Rude looks cool. 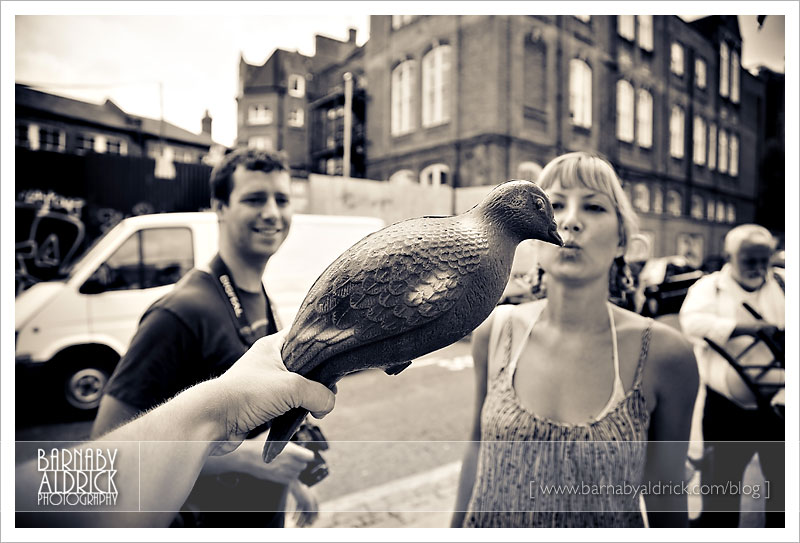 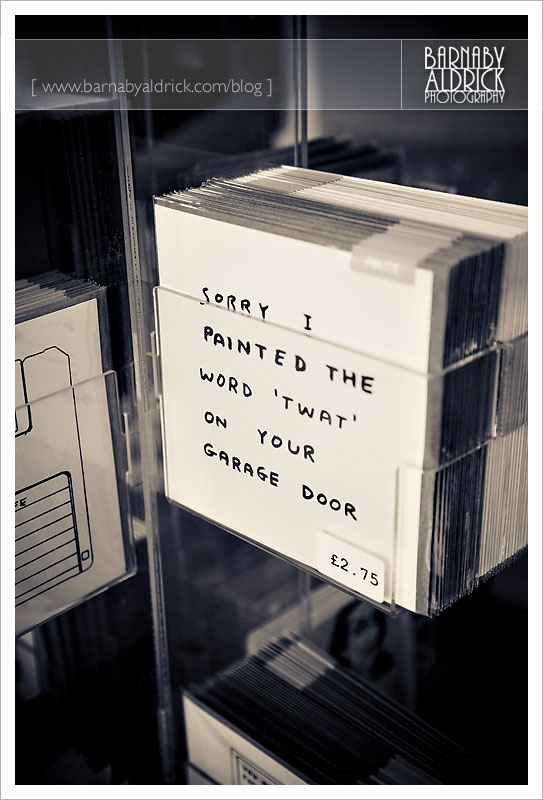 These cards by David Shrigley really make me laugh. Check his site out.  The ‘River for Sale’ and ‘Tea for sale cards’ are also tres amusing. 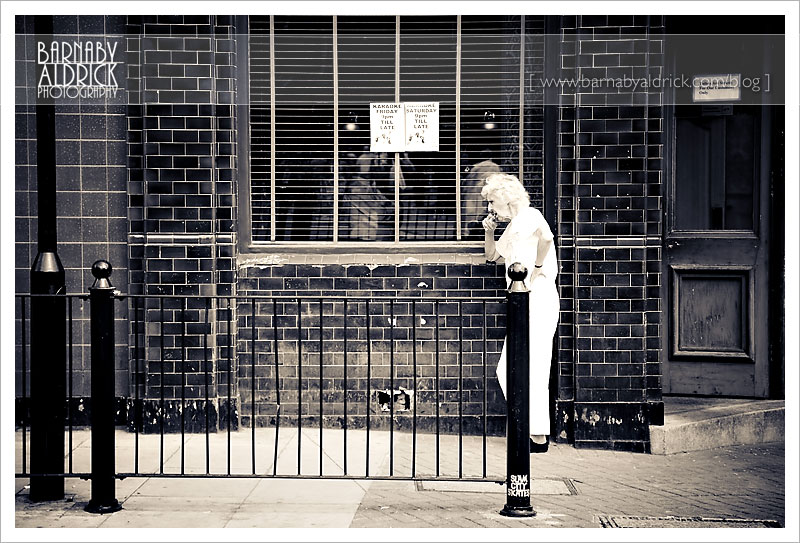 Ann-So spotted this old chick outside a tiled bar.  She looked like something out of Eastenders. 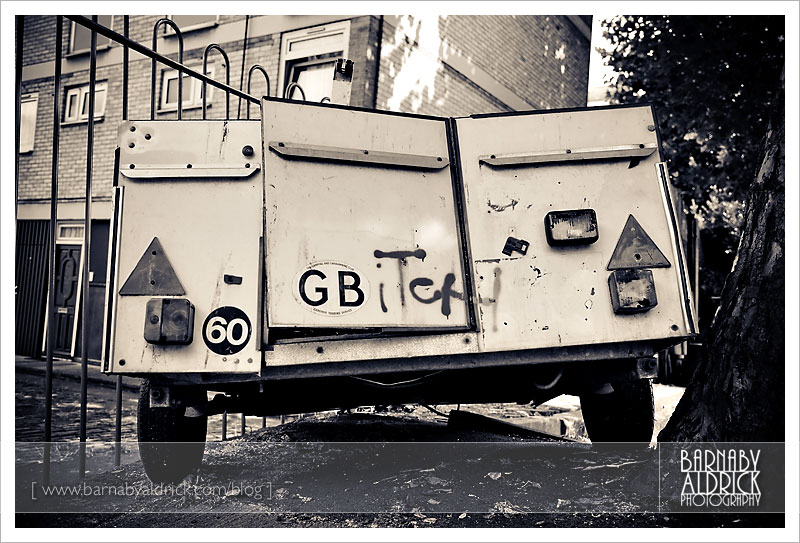 Creative swearing is my bag. 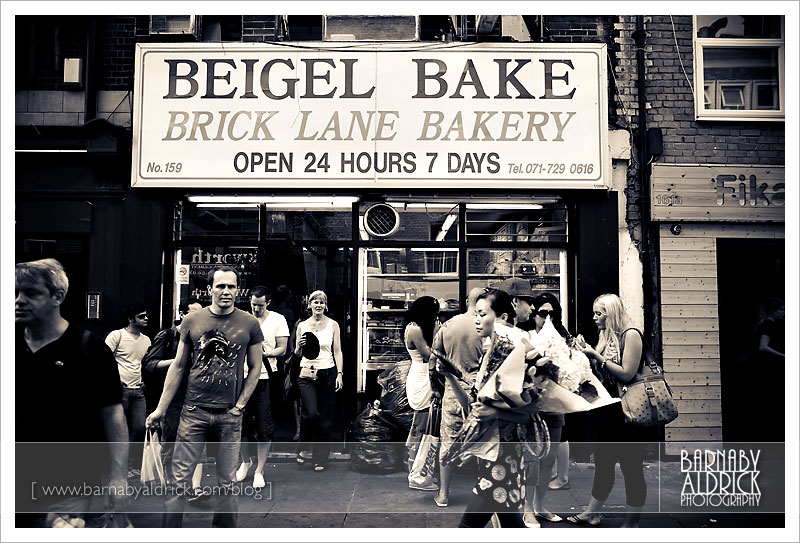 This bagelery on Brick Lane makes fantastic Salt-Beef bagels.  In crowds this thick, no-one really cares about the photographer…

Here’s a gallery of a few more faves around the markets we visited: 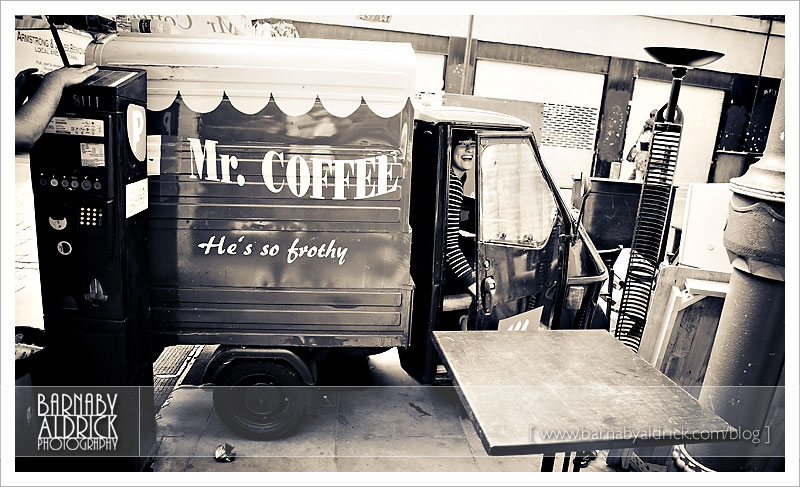 How can one resist coffee when it so frothy? 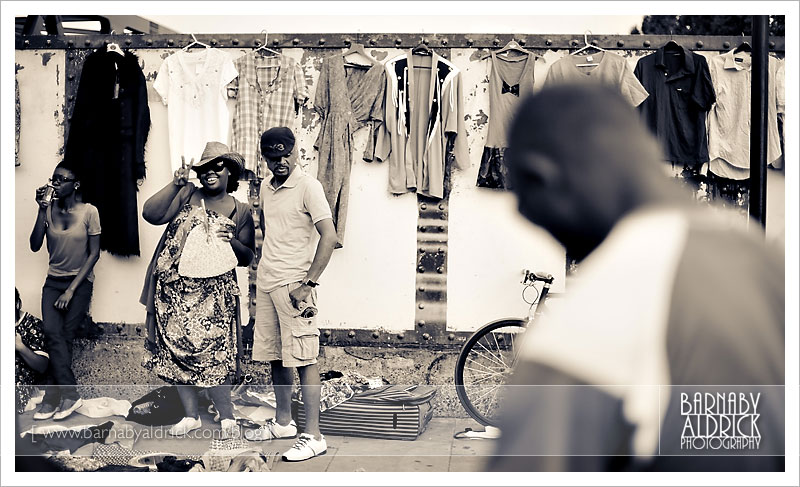 One the Brick Lane bridge, people started laying out whatever they had for sale. I was spotted by this ace looking chick. 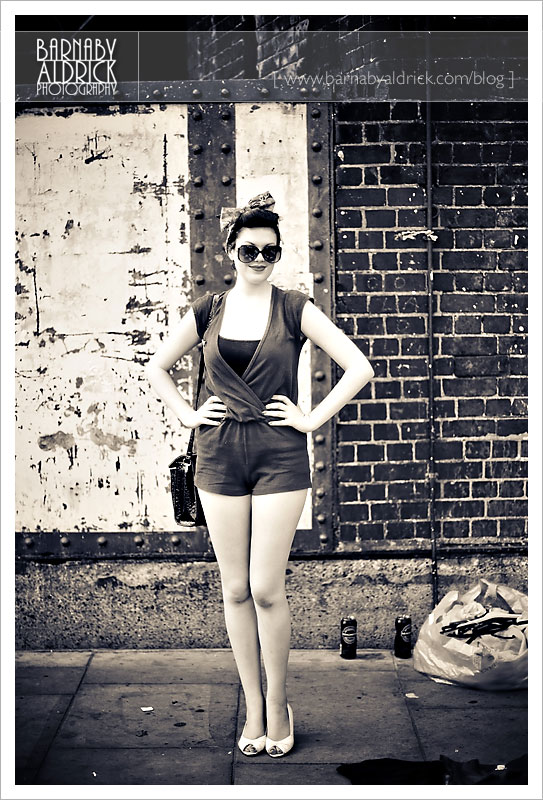 And I spotted this chick too, looking fab and selling tat. 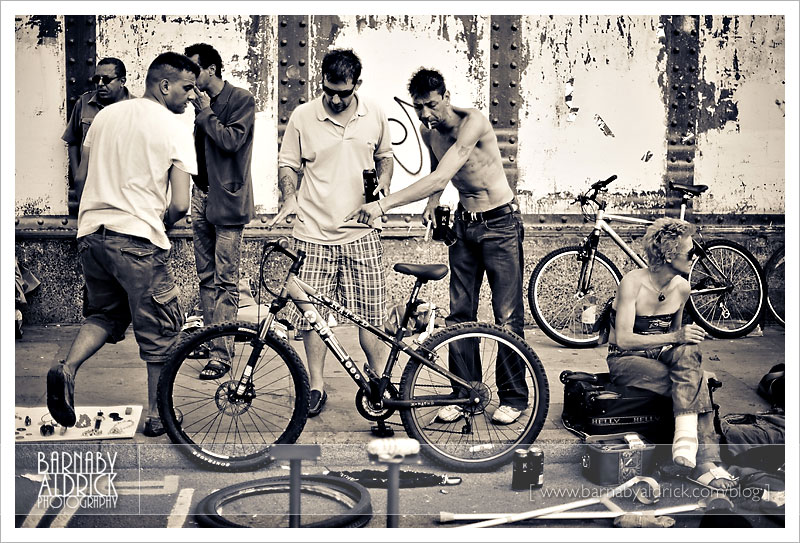 The atmosphere suddenly went cold as we passed the stolen bike men, looking wirey and shady. 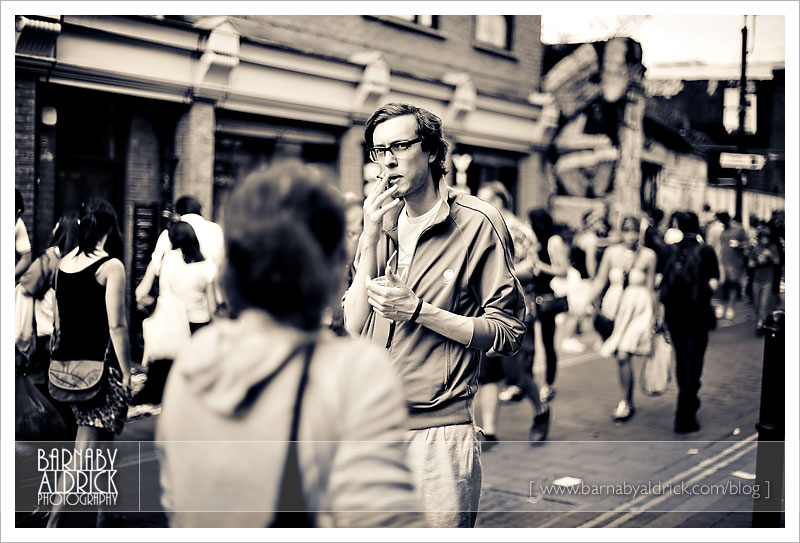 I like this f1.4 catch.  Would make a good inlay image in a CD case, were the man a muso. 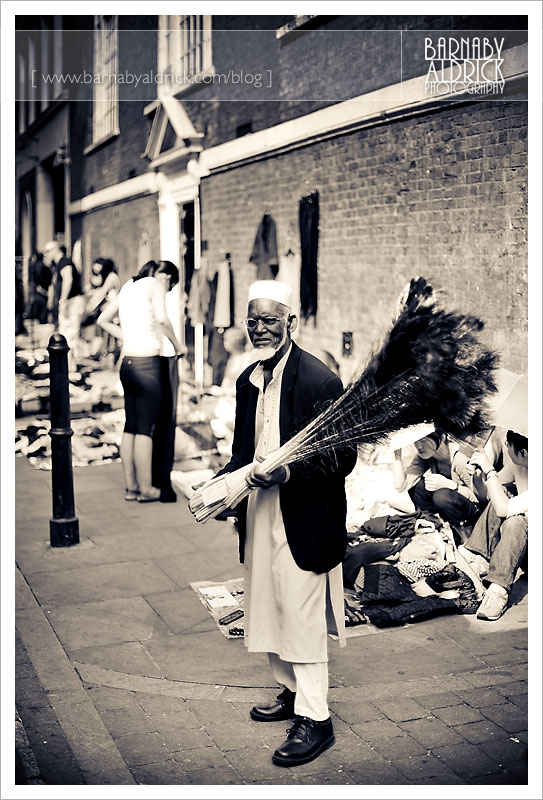 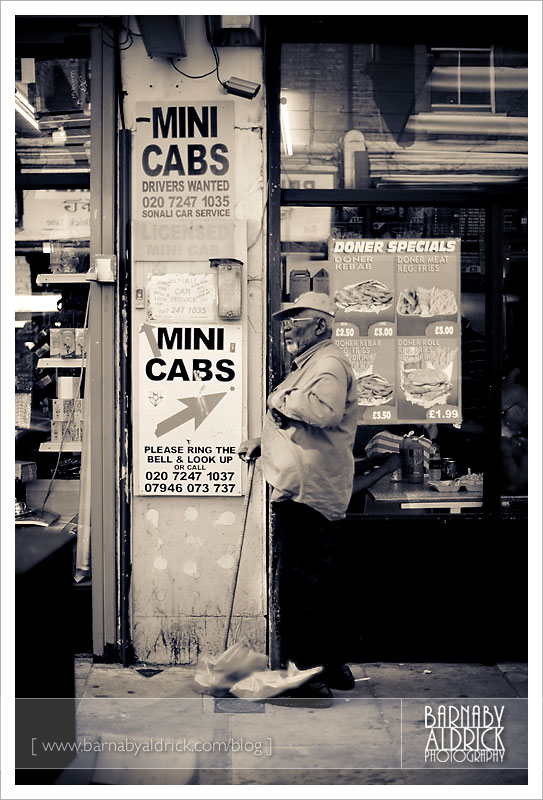 I really like this one.  Lots going on and a weathered looking chap, taking a break outside the kebab shop

When we were stomping between Brick Lane & Spittlefields, we spotted this cool art installation in a window were for £1 you got a 15cm square space to use as one desired.  There were all sorts of amusing ideas filling those spaces.  Here’s a gallery of a few, including some cool graffiti I spotted around the place.

We made our own pictures.  Rich made a poster saying ‘Earn £100 an hour, call now!” with no contact details and Ann-Sophie drew a lovely pigeon with the statement, where do all the dead pigeons go?  A good question.  They’re a mysterious bunch.  Also, why don’t you see baby pigeons?  On the pigeon note, did you know that if you put baking powder in bread or sultanas, and feed it to pigeons, they explode?  Apparently it’s cos they can’t fart.