And yet to others, it’ll be borderline arousing.

You have been warned…

The camera I shoot my weddings on, the Canon 5DmkII, shook the world of cinematography by including the option to shoot outstanding ‘Full Frame’ (ie. 35mm sensor size) full HD video.  This kind of technology was found only in obscenely expensive, and unfeasably massive equipment and now it was available in a £2K camera body.  The results have turned the video world upside down & inside out to the point that episodes of mainstream TV (such as House) have been shot on them and, while photographers the world around still only use this capable camera for stills and aren’t interested in it’s video, others are finding ways to make it more and more versatile in the world of film.

Or in others words, some companies are making a fortune out of packaging bits of pipe & strapping things to them. 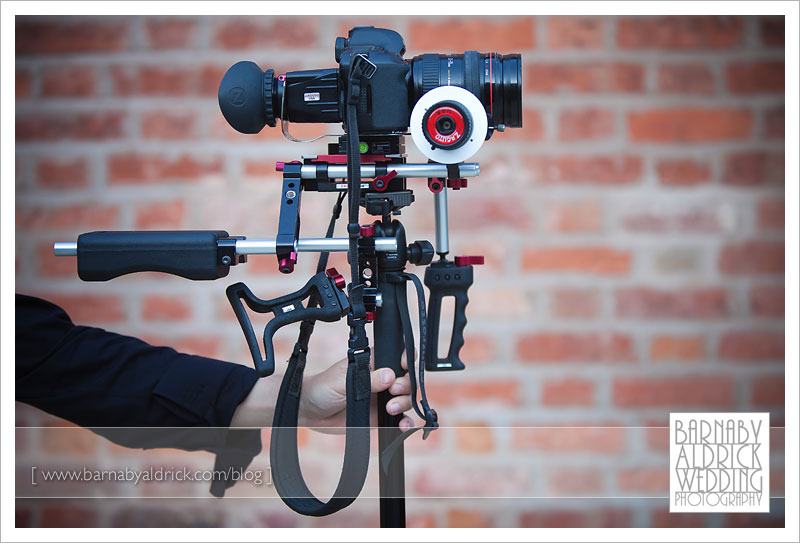 Earlier this year I shot a wedding video, pretty much ‘caus I could and ‘caus I thought it’d be fun.  So I hired a £2K Zacuto rig from The Flash Centre & set about Carly & Joe’s wedding (blog post here).

The worlds of stills and TV have been building rigs from 15mm pipe & bolting on all kinds of geeky gear, such as follow focussing devices, matte boxes, counterbalancing weights, external displays & the likes.  There are loads of different companies, some new, some long established, finding ways to sap cash from filmmakers; and cos it’s so specialised, these toys generally cost a fortune.

With the advent of 5DmkII videography, an opening has appeared on a leveller playing field for the indie film-maker.  With a few choice gadgets a seriously pro finish can be acquired.

With 3B Media, Phil Barber, Rob Booker & I have embraced videography from a photographic viewpoint, and befriended some awesome kids on the other side of the fence (film-makers and TV camera ops) and we’re learning exponentially about this exciting and brave new world.

As with many creative disciplines, it’s not the gear that makes things great, but the creativity, eye & idea. 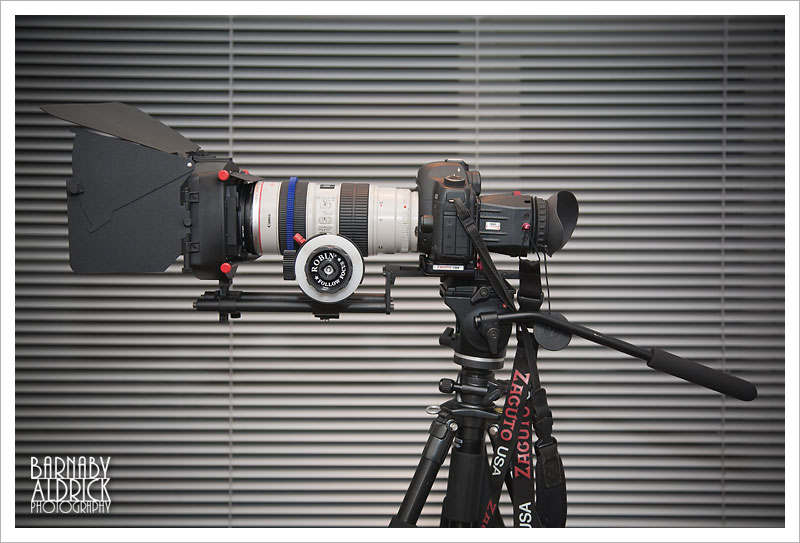 So we bought this badboy!

The viewfinder loupe bolted to the back is a Zacuto Z-Finder Pro 2.5x.  It’s a top way to gauge focus on the fly and to see the screen outdoors.

The rig beneath was my recent buy.  There are far more expensive and solid versions available, but I spotted this one on eBay – a pipe rig, follow focus & matte box for £300 ONO.  So I offered £250 & won!

It arrived today.  So it’s safe to say today could have been more productive… 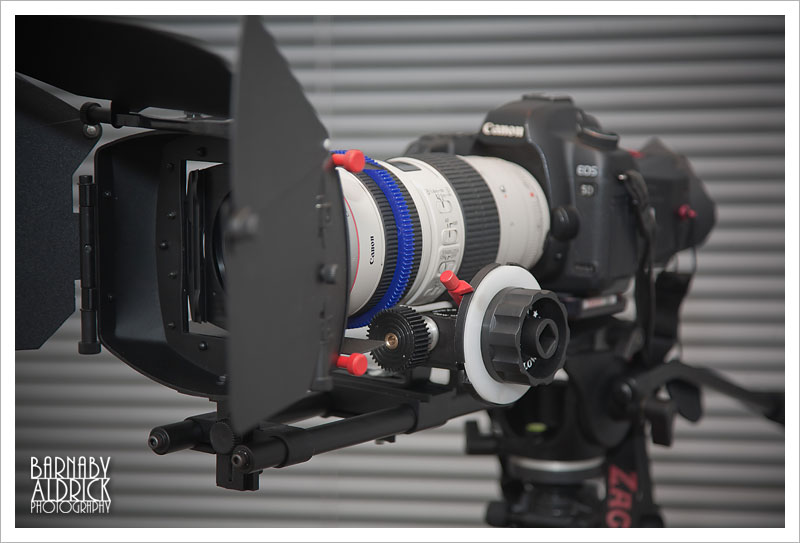 The key thing it does is allow you to smoothly turn the follow focus dial to manually focus the lens while shooting video.

The blue band straps around the focus ring & is turned with a smooth gear system.

This is by no means the most sophisticated system available, but most follow focus systems alone cost £800+ without the pipes & plates. 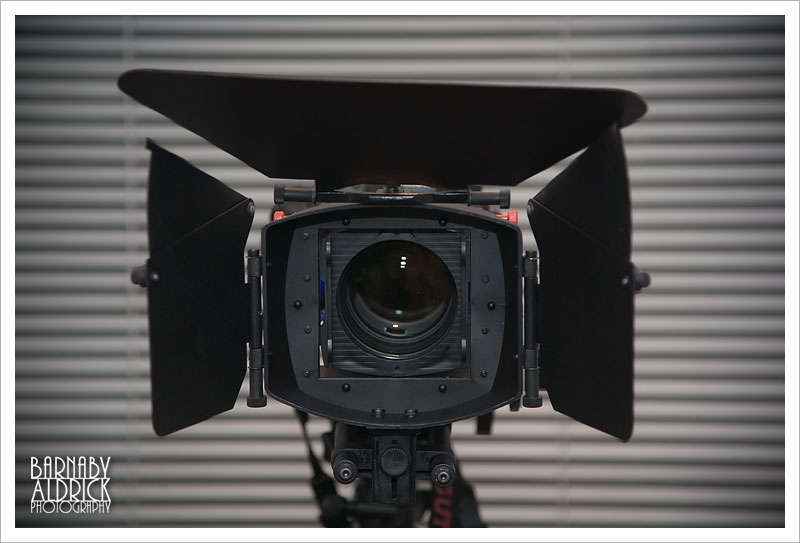 The front has a Matte Box & shades on it.  Officially they shade from flare, but basically they make the camera look more movie-ish and make 5D camera men feel more like film-makers

Though behind the square is basically a Cokin P-system filter holder, allowing you to slide in neutral gradient filters etc and to strap your lens to the matte box.

I’ve various P-size filters and adapter rings in my bag of goodies (read: things I bought & don’t use) and they’ll all fit here. 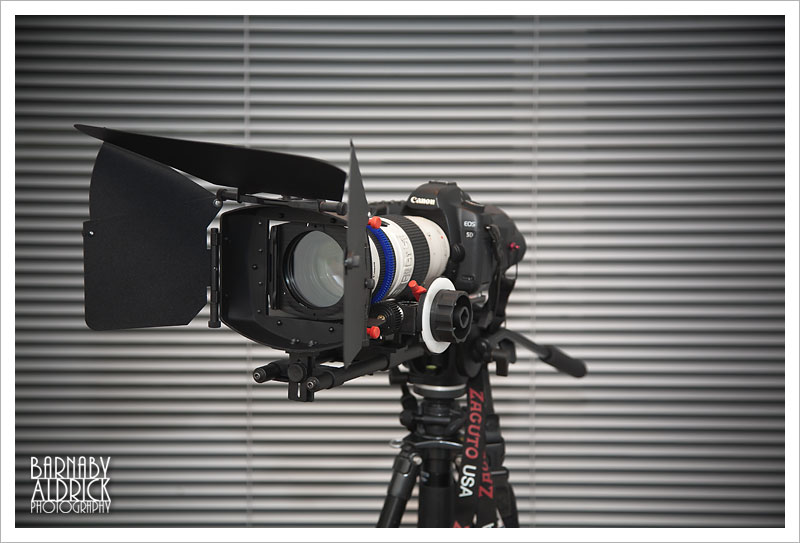 Although not in shot here (as I only had my Manfrotto 701 head to hand) we’ve invested in some quality video legs & a Manfotto 503 pro fluid video head, so as to get smooth movement when tilting & panning. 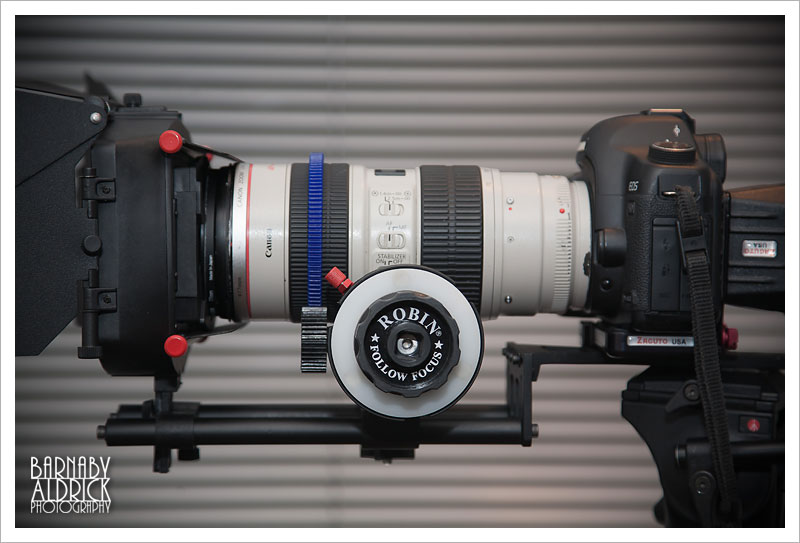 Basically it’s all about this guy.  Mr follow focus.

You draw a line on the white disk where you’re focussing from & use the red point to turn it to & you’ve basically done the job of a focus puller. 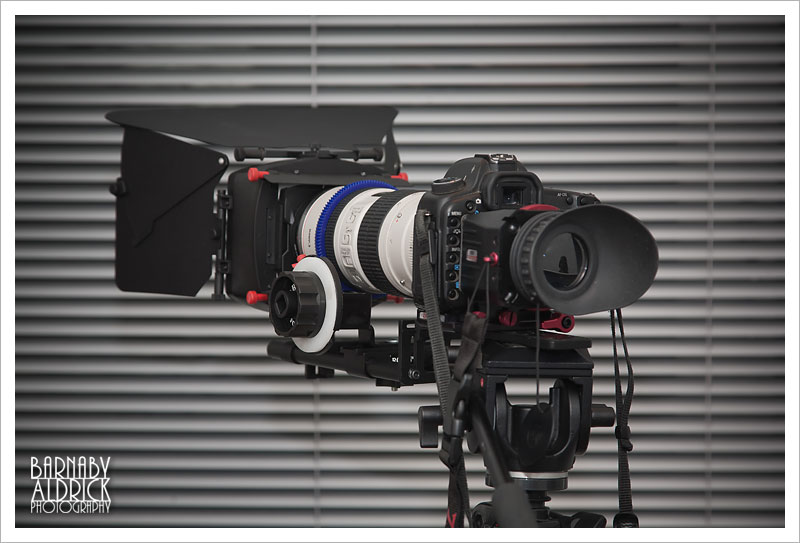 So there you are – my new toy.

Though £250 is a lot of wonga, I think I’ve found a bit of a bargain and am looking forward to putting it to the test.  It would have been great to have on our most recent 3B video shoot (which is very much in the pipes & we’re looking forward to posting vids soon).  Next week I’m venturing up to the Isle of Arran to shoot a creative music vid with a band called ODi (I once played bass with them).

I think this rig should make it even more fun to be creative.  So watch this space and I’ll post some results soon…