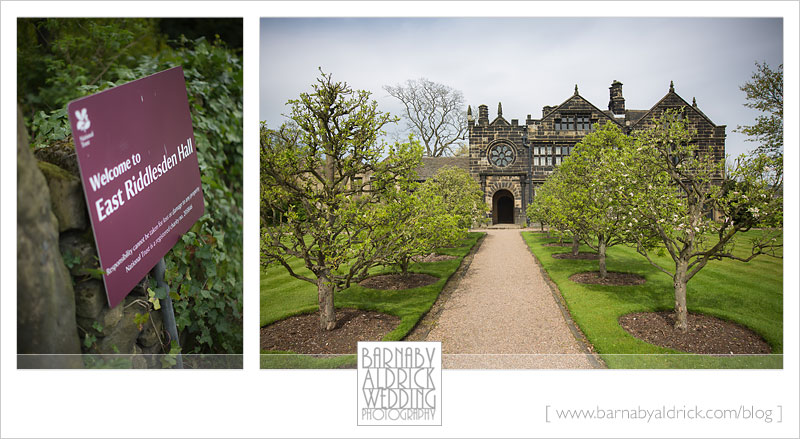 A week ago yesterday I was up at the lovely East Riddlesden Hall near Keighley for a pre-wedding meeting! 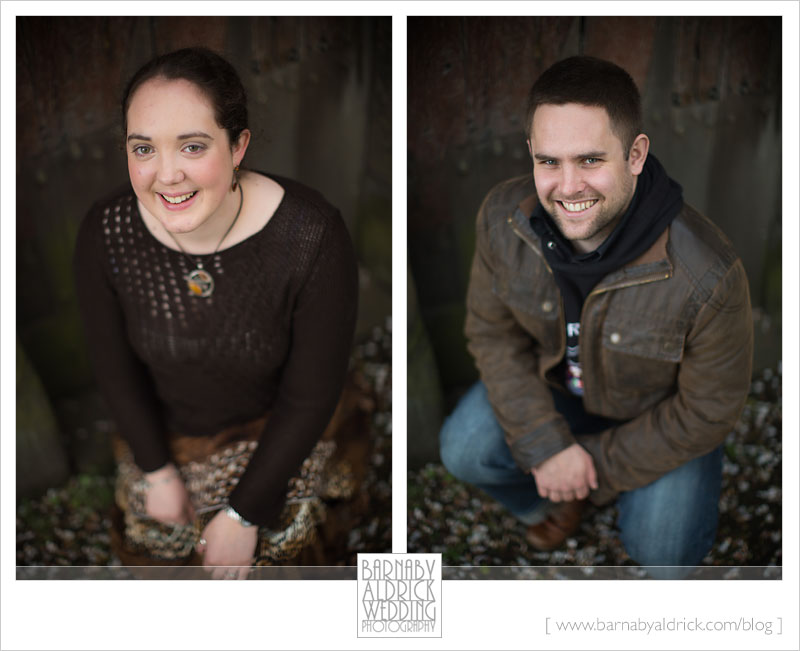 I was there to meet Nicola & Chris, a couple we’ll soon be joining to document their big day! 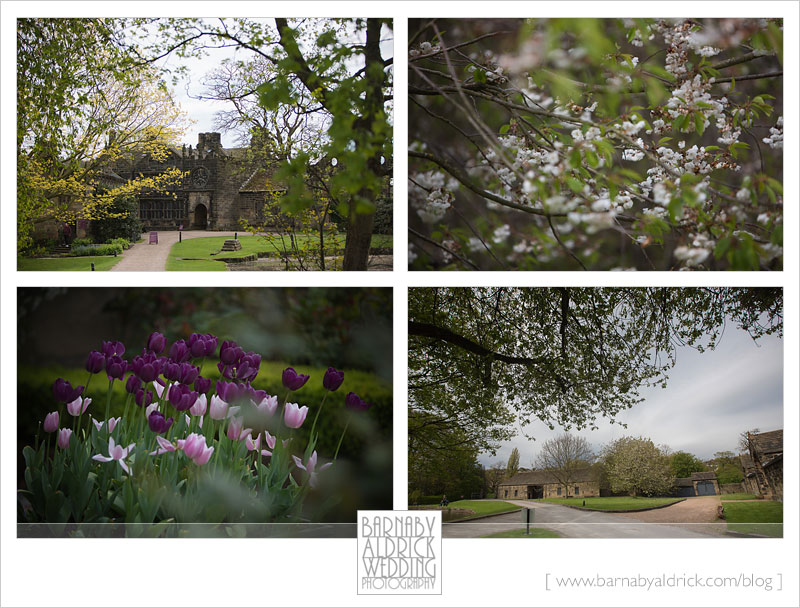 It was a beautiful day and after a coffee & a catch up in the cafe we headed out into the beautiful National Trust grounds around the hall for the practice photo shoot I put all my clients through before their big day! 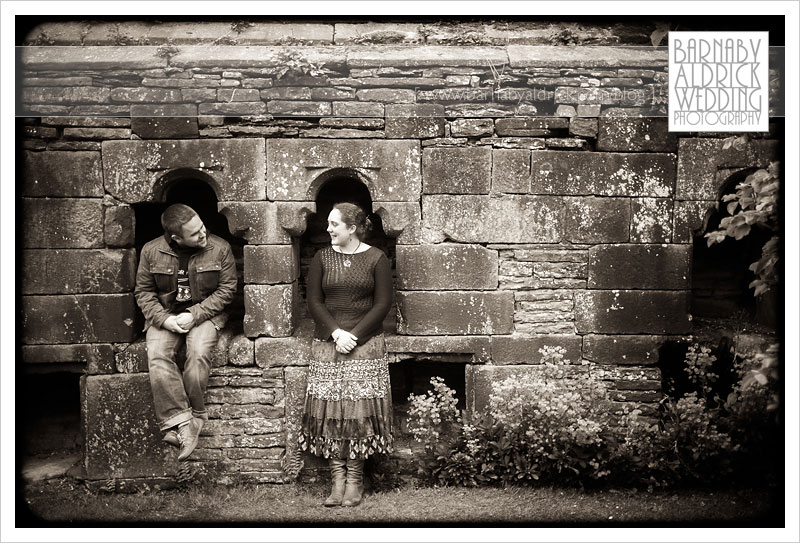 The practice shoot is really useful to show a couple how it feels to be photographed and what I’m looking for from them! 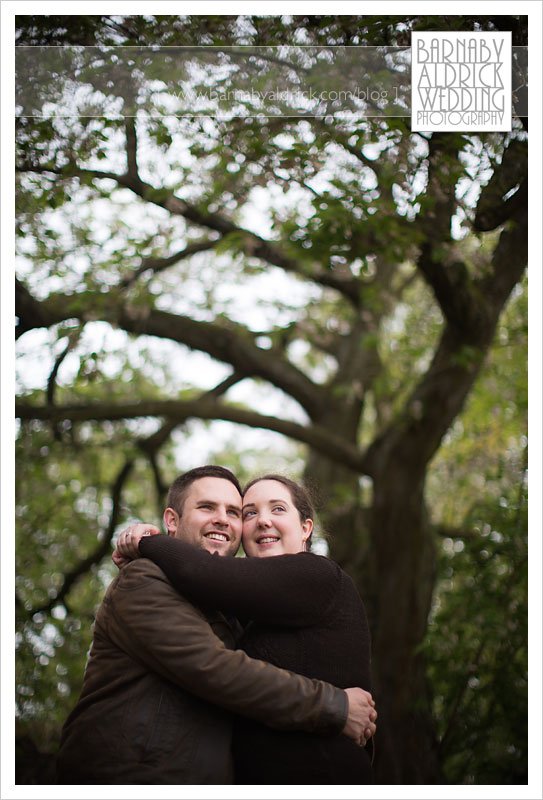 The pre-wedding meeting was especially useful for Nicola, Chris & I, as I’d not officially met them before!  Generally, I’ve met most couples I photograph before the pre-wed, usually for a brew somewhere before booking to check we’re all on the same page; but Nicola’s mum Catherine was on photo booking duties! 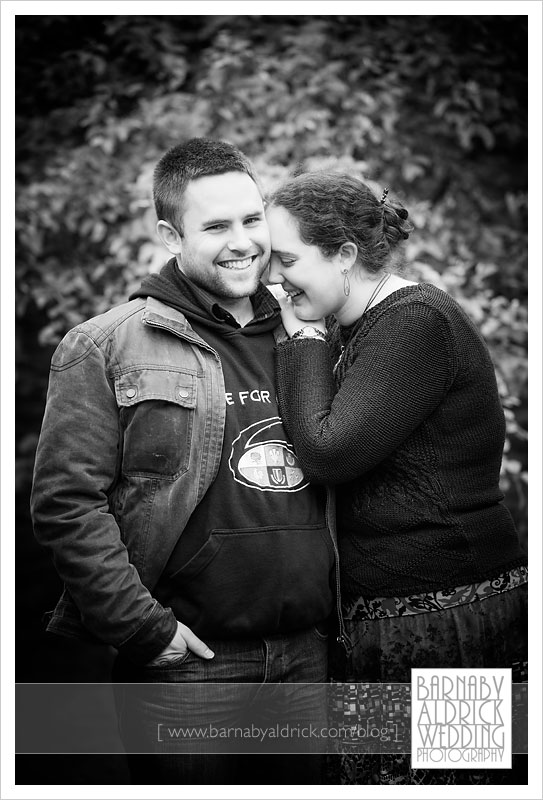 Fortunately these guys were a) great together, and b) found me funny (or at least seemed to!) 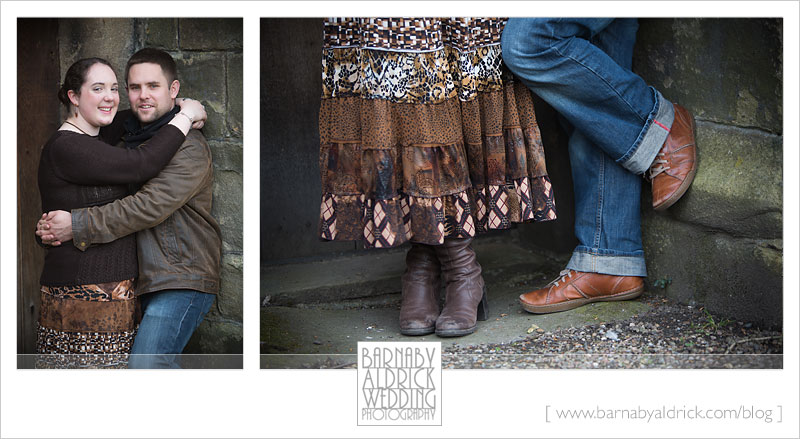 They were very natural together 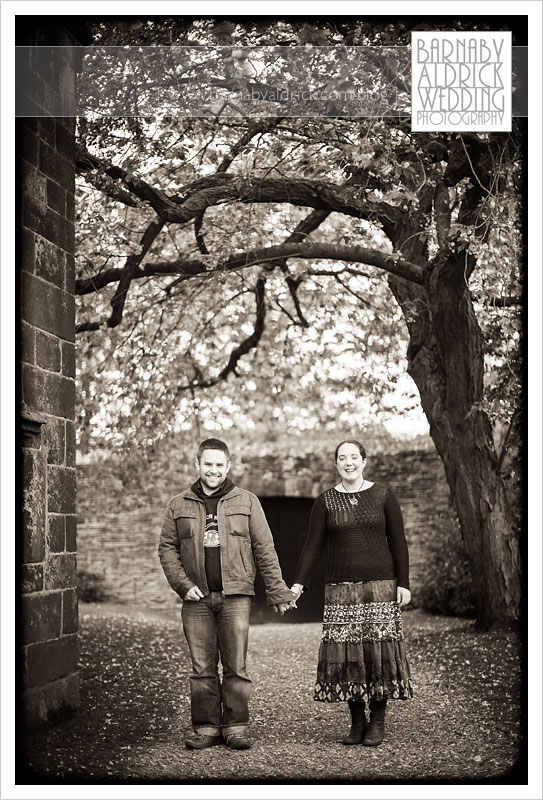 I’m lucky enough to be one of a few official photographers approved by the National Trust to shoot weddings at East Riddlesdon.

It’s a great place to shoot, inside and out. 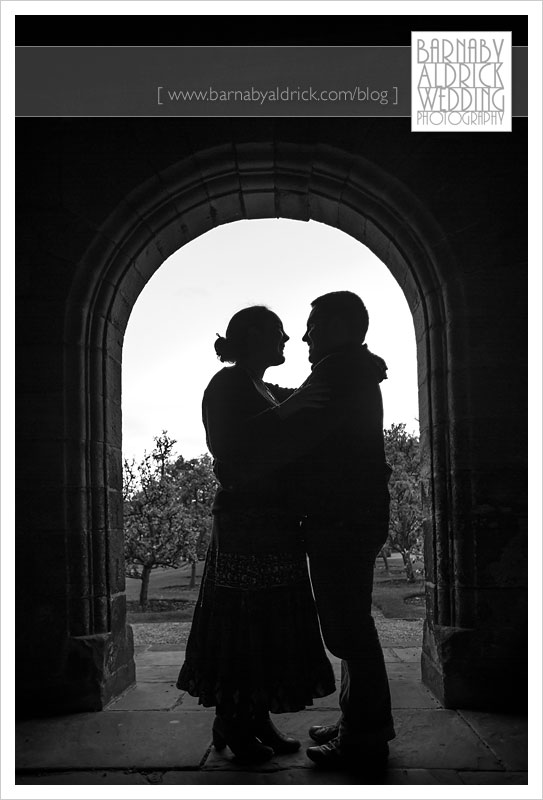 Nicola said she’d been loads of times growing up, and has photos of herself over the years in this archway; so we did another of her and Chris! 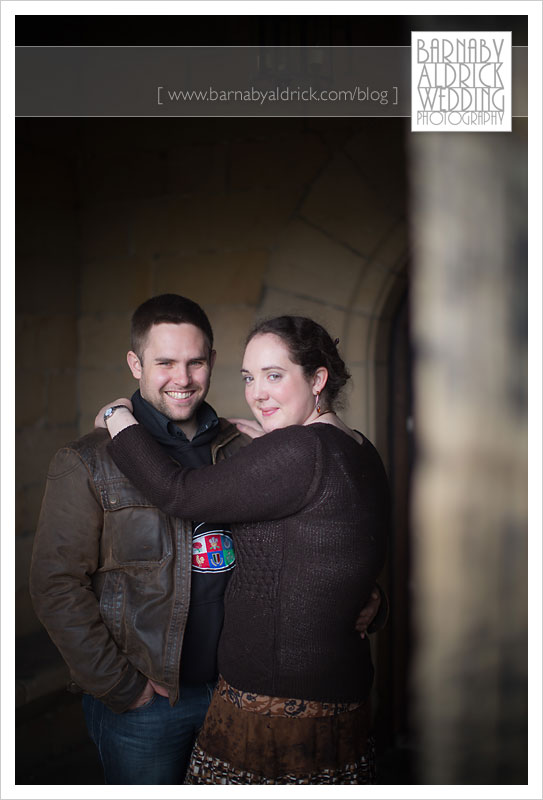 Without moving them, I shuffled past and got this nice one looking into the same archway. 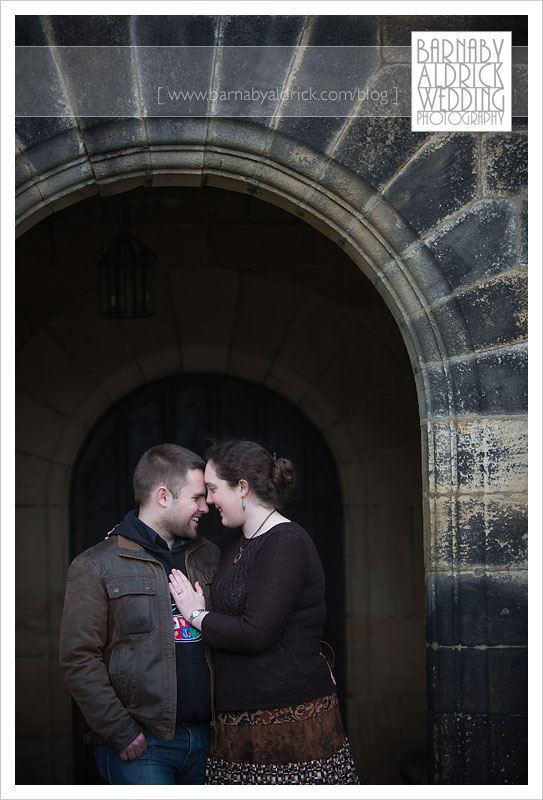 And a few further steps we caught this one too!

It’s all about me putting in the legwork eh!? 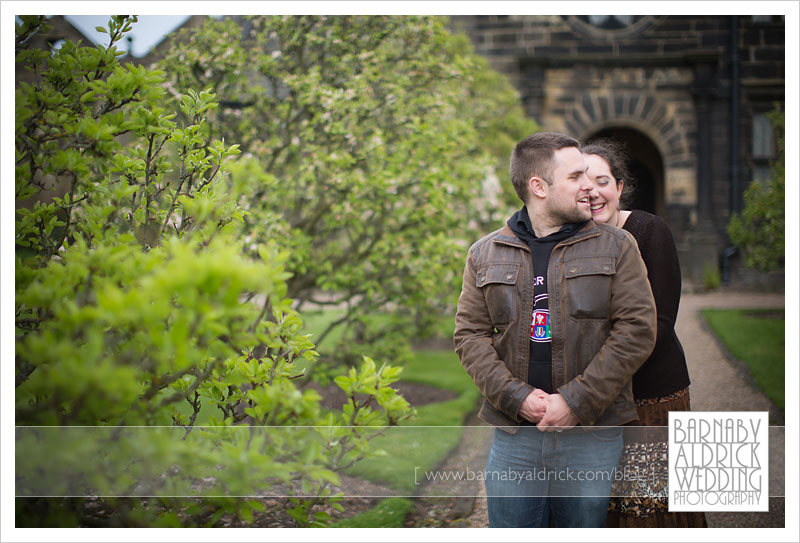 Round the back of the hall is a hedgerow of Apple trees about to blossom, so it seemed rude not to have a cuddle there. 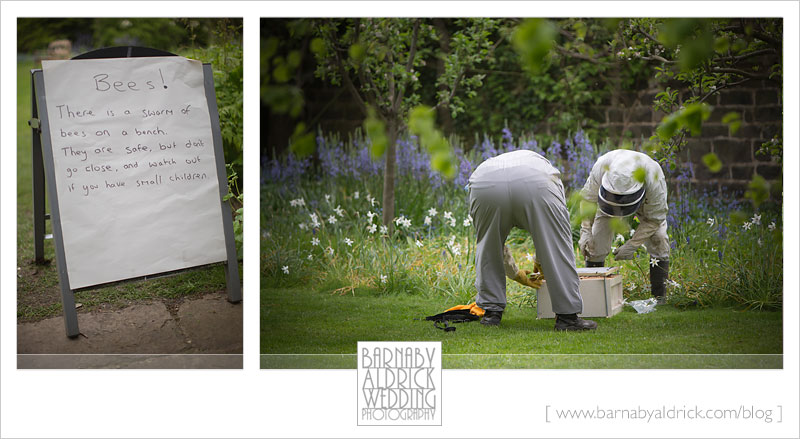 As we walked into a secret garden round the side, we saw this amusing sign about a swarm of bees on a bench… 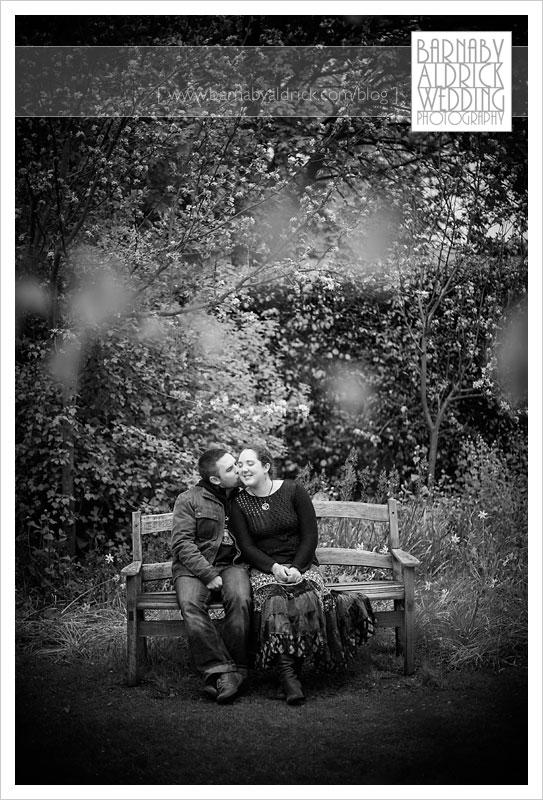 …so we laughed in the face of danger and took a seat on the bench! 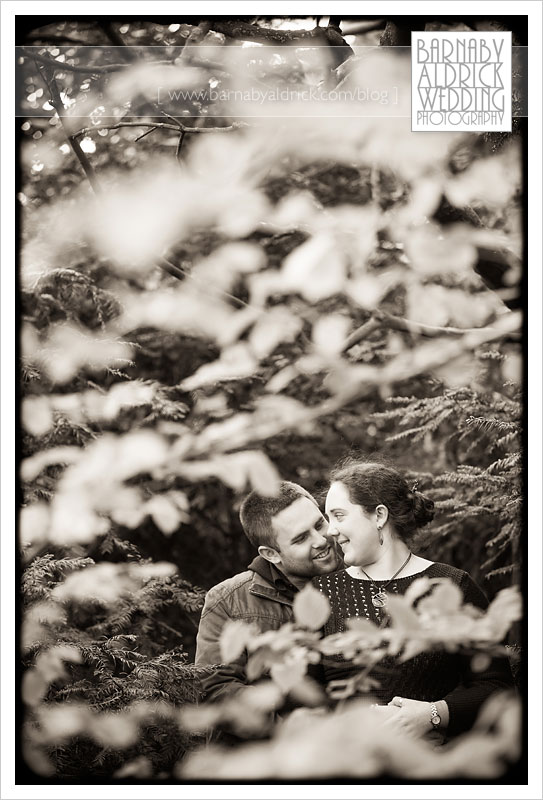 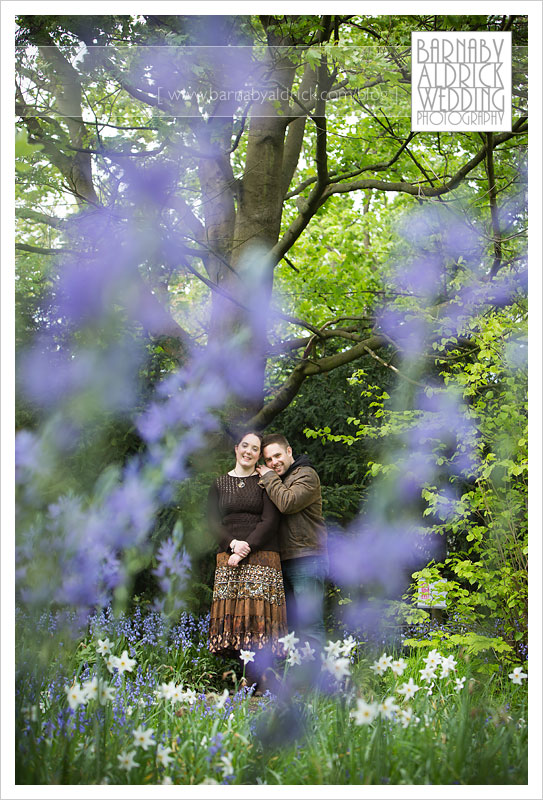 Bluebells were out too, so I got down low to include them in the frame.

As we were wandering round, getting to know one another, and it turned out these Nicola & Chris are LARP-ers.  It stands for Live Action Role Players – where participants dress in costume and pursue goals within a fictional setting (set in the real world), while interacting with others in character!

Basically they like to dress up in chain-mail & leather and fight with ancient weapons!

As we wrapped the shoot, Nicola mentioned they had their LARP swords in the car boot… 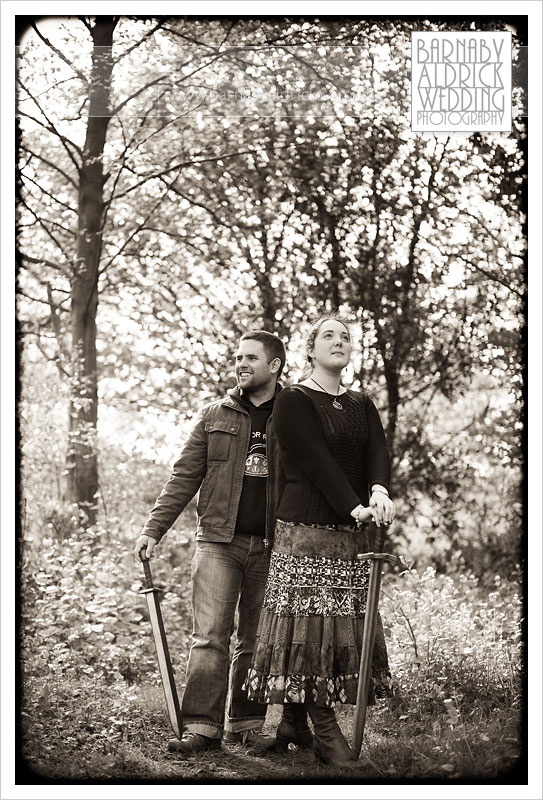 SO IT SEEMED INSANE NOT TO GET THEM INVOLVED! 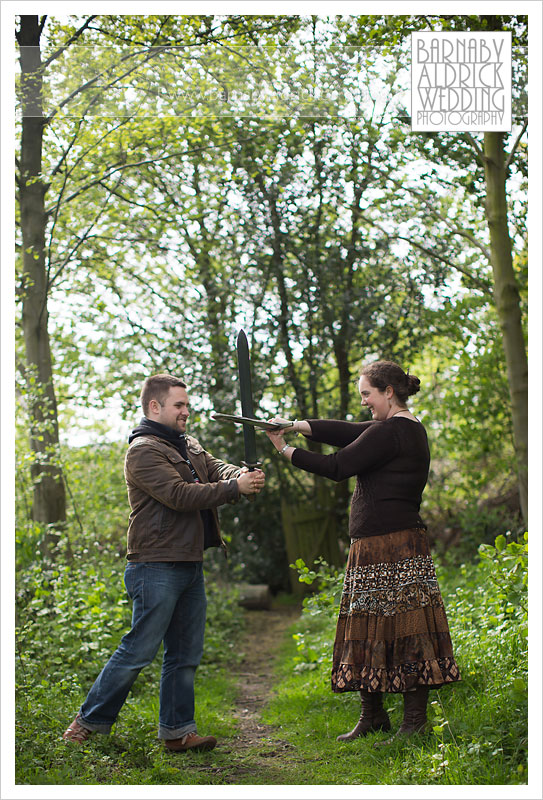 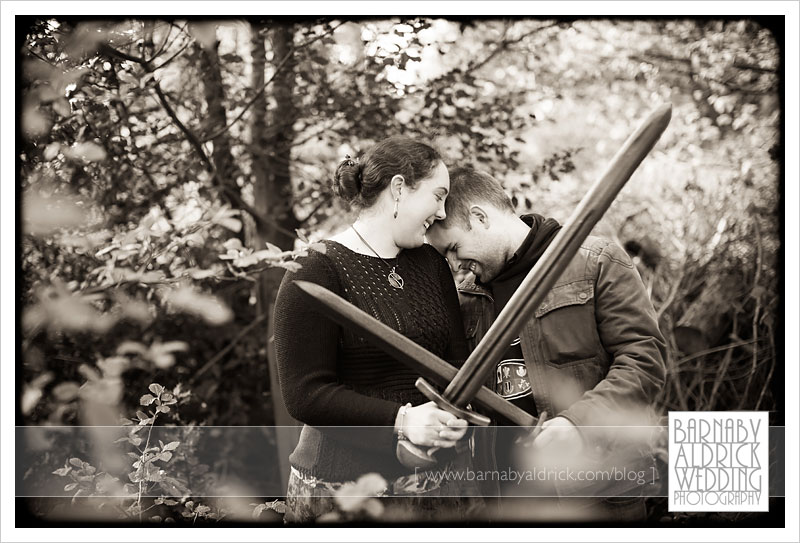 Love this one of them laughing about what we were up to!

It was really great to meet these two at last, and am now really looking forward to joining them on their big day at the end of June!

… the question is, will be swords for the portraits?! 😉