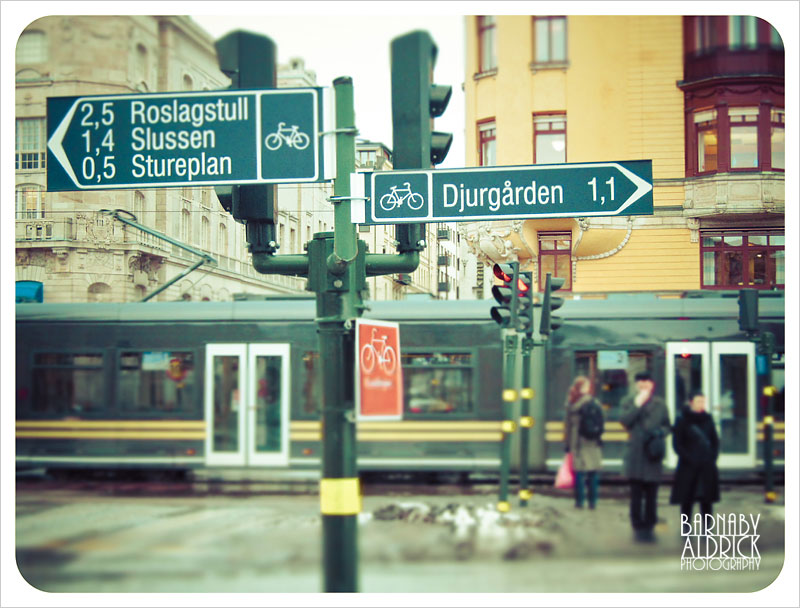 It feels like forever since Clare & I were in Stockholm for her 30th Birthday break.   I posted the first batch of images on this post.

It’s an very cool & chilled out place to visit.  Probably better when its not -14 degrees, but here are a few more pictures that caught my eye. 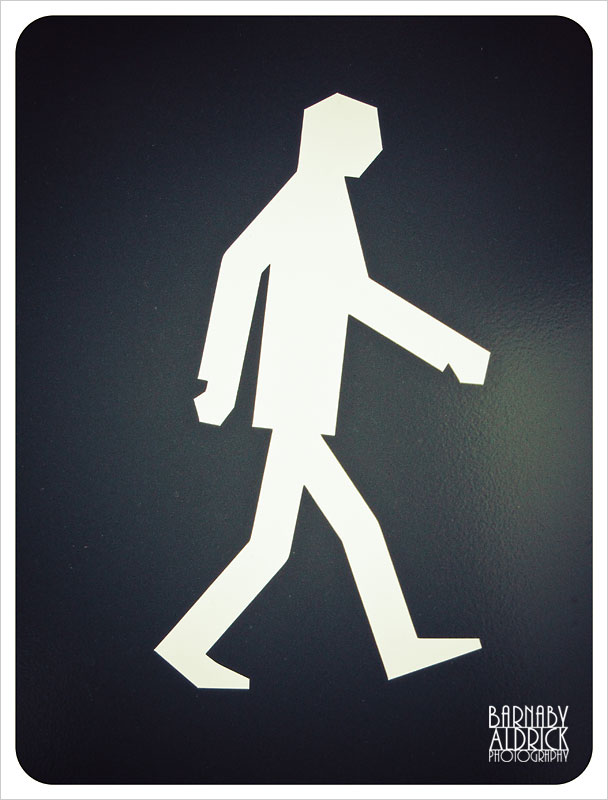 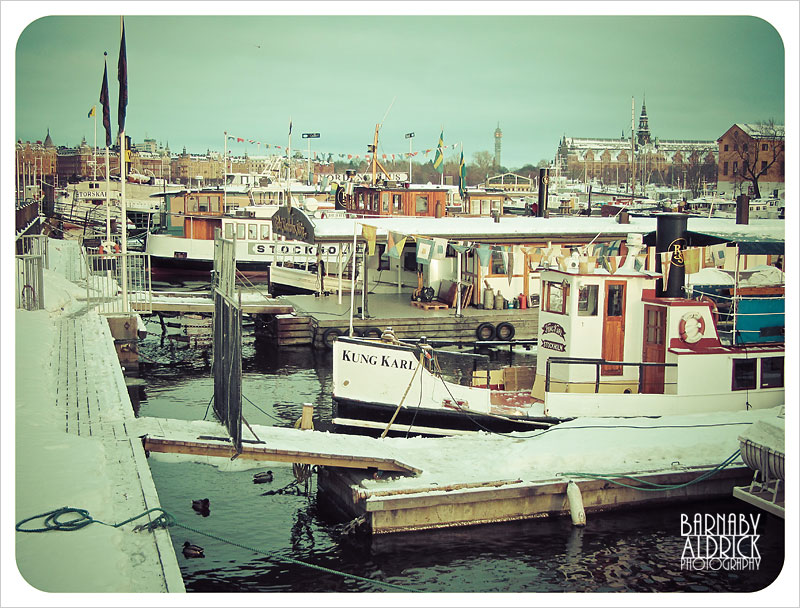 Stockholm’s based across 14 islands, and there’s a nice vibe crossing the bridges to explore the different museums & parks. 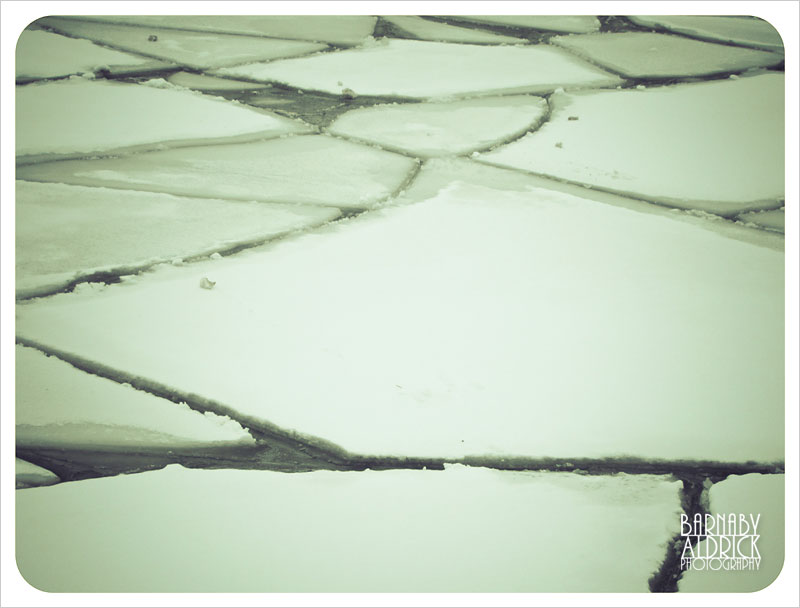 Though the ol’ ice is pretty think in parts. 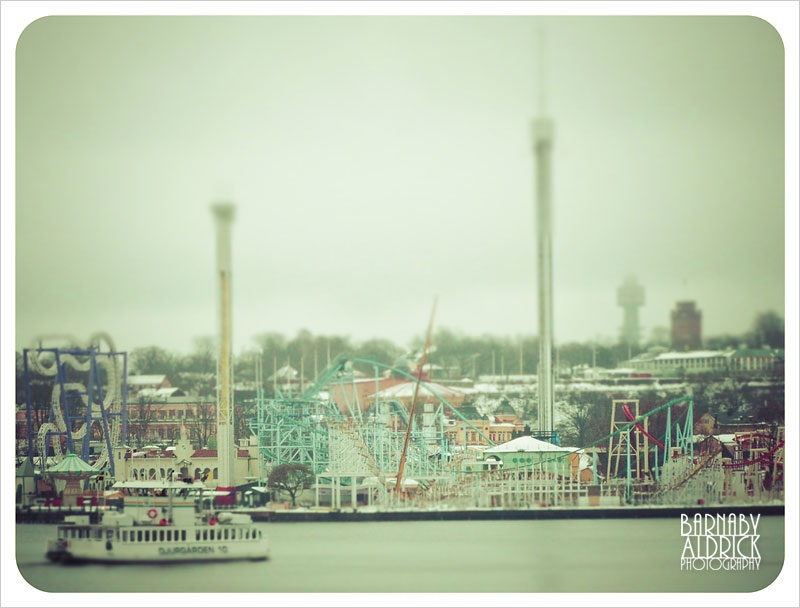 Some islands are further away than others, but there’s a regular little ferry system between the islands.

We this caught one over to the Djurgården, where unfortunately the amusement park Gröna Lund was closed for the winter. 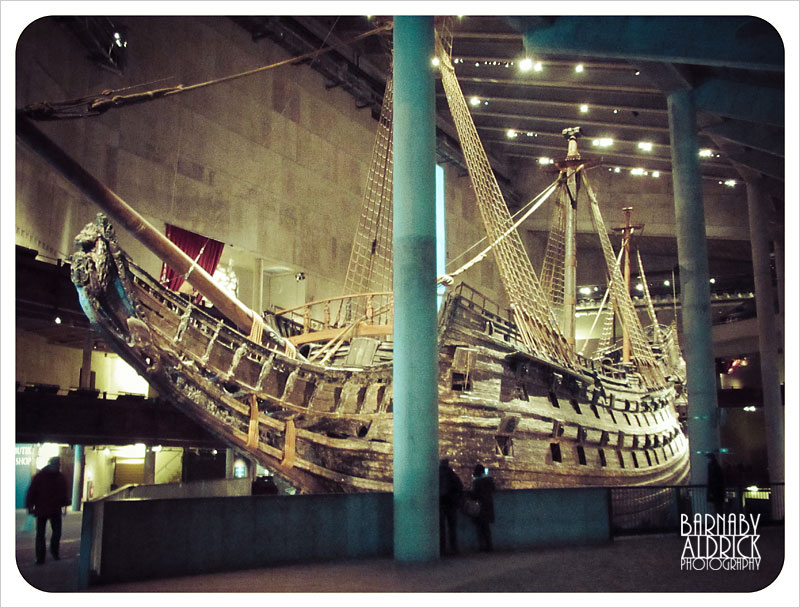 As it was generally sub-zero out, the highlights were generally being in the warmth around the bars & cafes, galleries & museums.

Probably the best of these, and at the top of my Swedish pal’s list of things to do, was Stockholm’s Vasa Museum.

Basically, in the 16th century Sweden’s King comissioned a hardcore battleship to be made, with double rows of canons to mash up the Poles good.  On completion, the whole of Stockholm was given the day off to watch it set sail.  After a full gun salute it set sail into the channel, caught a light gust in its’ sails, tipped over & promptly sunk.

Denied!  Too much canon action!

It sunk into Stockholm’s harbour bed, and sat for 400 years in a rare mix of wood friendly seawater.

In the 70’s some professor literally found it by dropping weighted corers on fishing line to the bottom till he hit wood.  Then they raised it and spent 20 years sticking it all back together.  Now the Vasa sits proudly reconstructed in near mint condition, as the worlds only surviving 16th century warship!   It’s quite a sight. 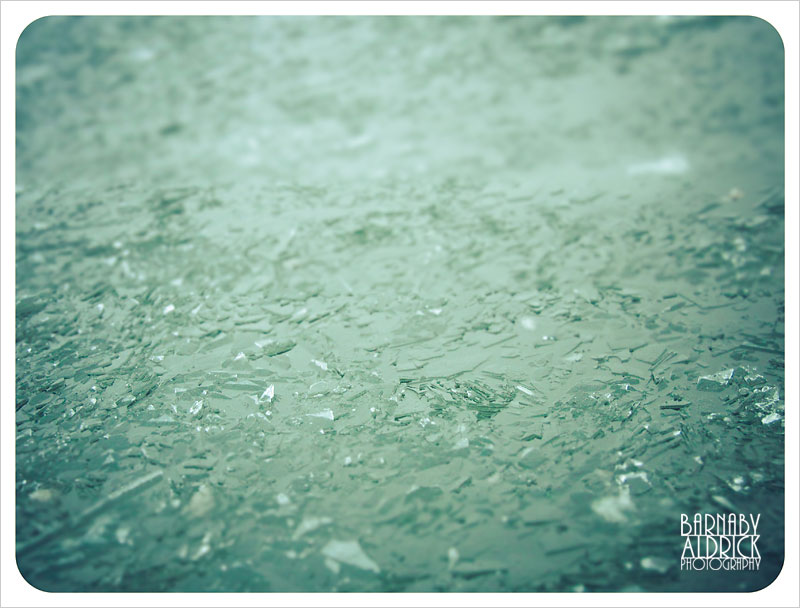 The camera I was rocking was my Canon IXUS 1000HS, and I love the tilt-shift feature.

Not only does it gives the images the tilt-shift look I like, but also gives otherwise flat compact camera images a ‘depth of field’ look. 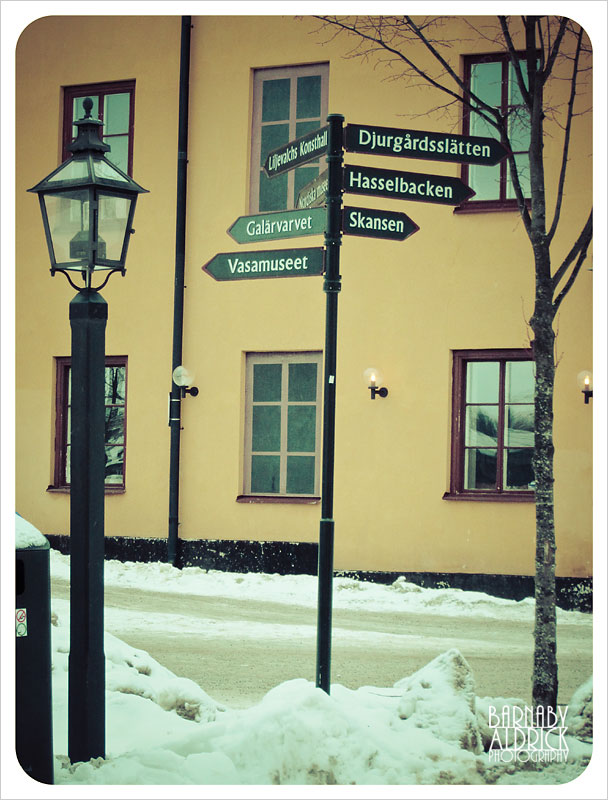 To give the images a little polish, they’ve been given a spot of post production love in in Adobe Lightroom. 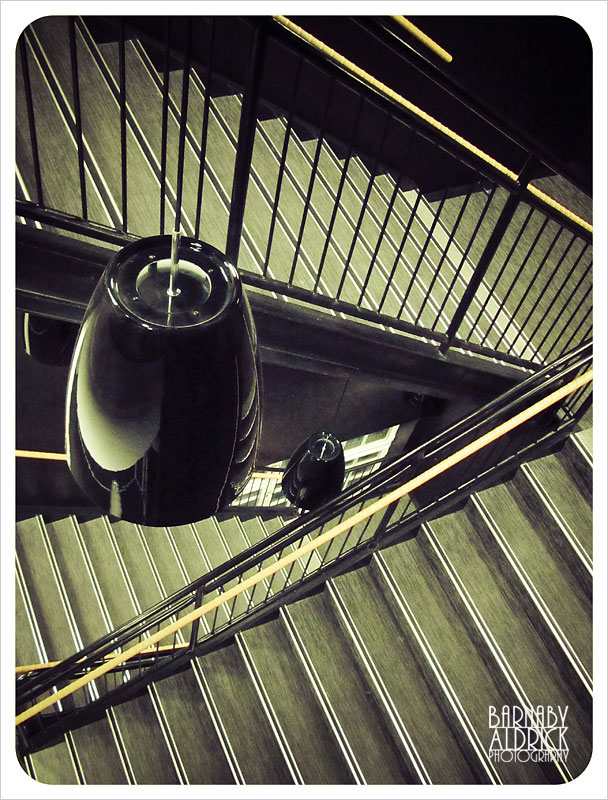 Great design is everywhere in Stockholm.  I liked this one of a staircase in a galleries we visited 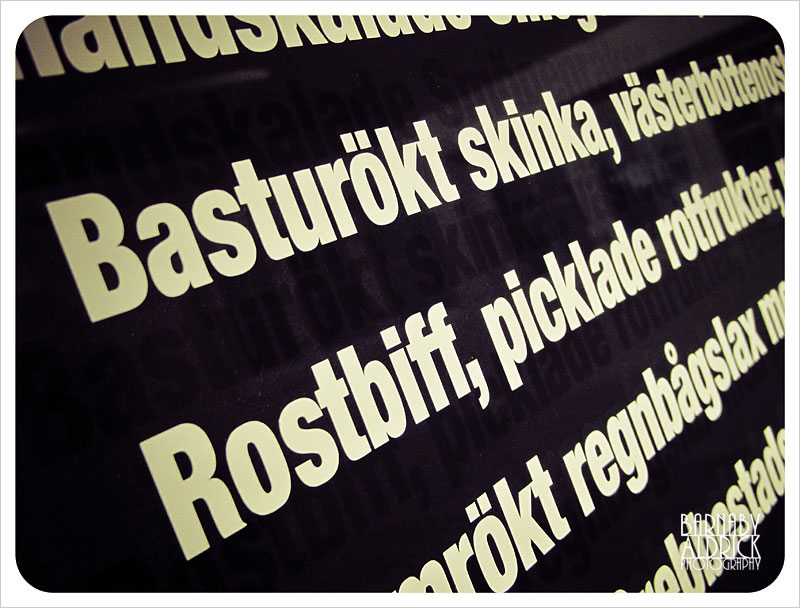 Even the menu in the gallery cafe looked cool.  But I’m not sure if that was cos they put fun o’s on some letters & spell Roast Beef ‘Rostbiff’ 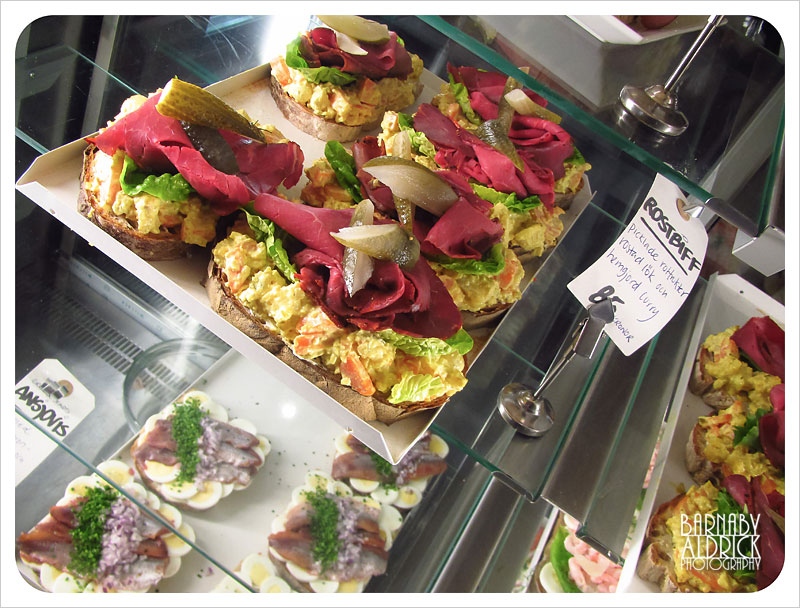 Even the sandwiches show design 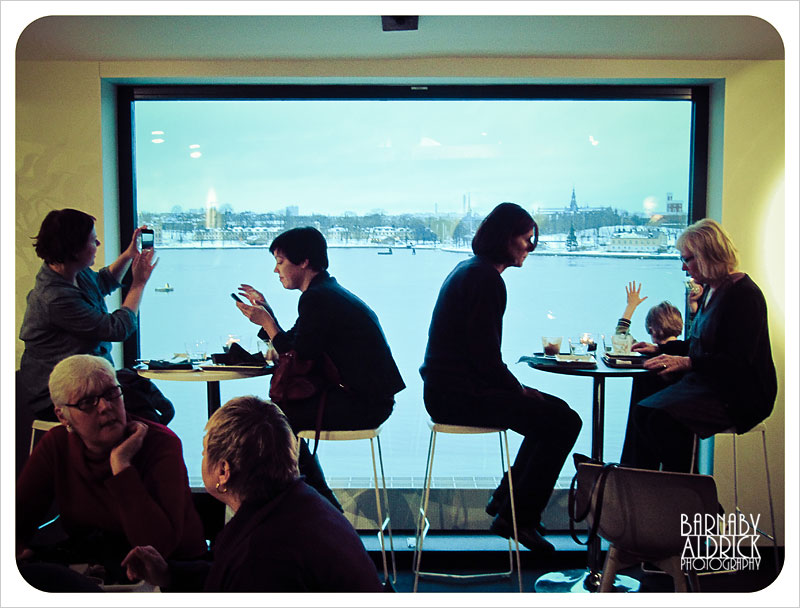 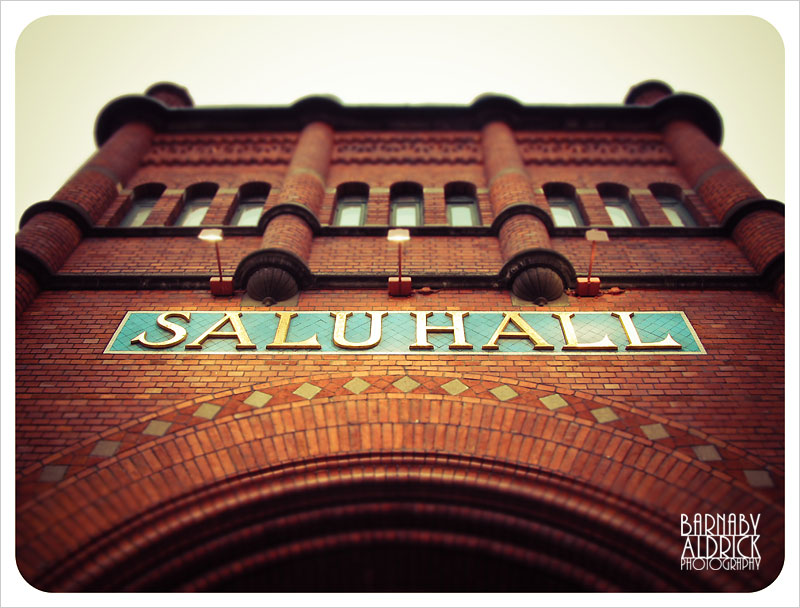 Another place we stopped to visit was the Saluthall on Jamie Oliver’s recommendation.  He visited on his ‘Jamie Does…’ episode in Stockholm.

I think you can still watch it on 4OD here. 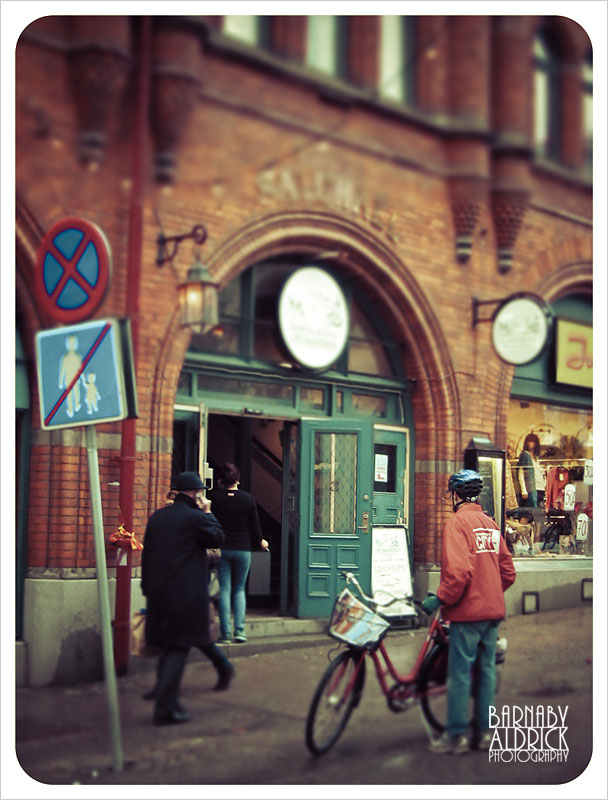 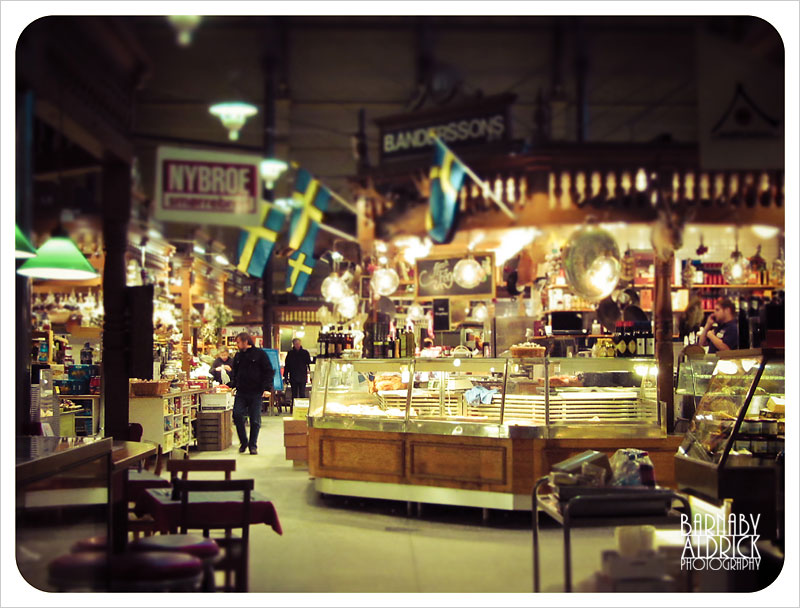 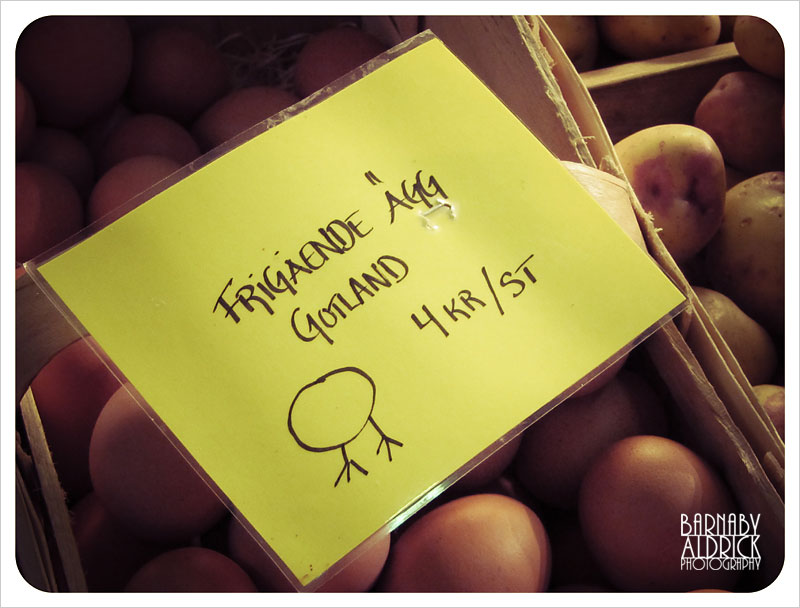 I liked the little egg with legs! 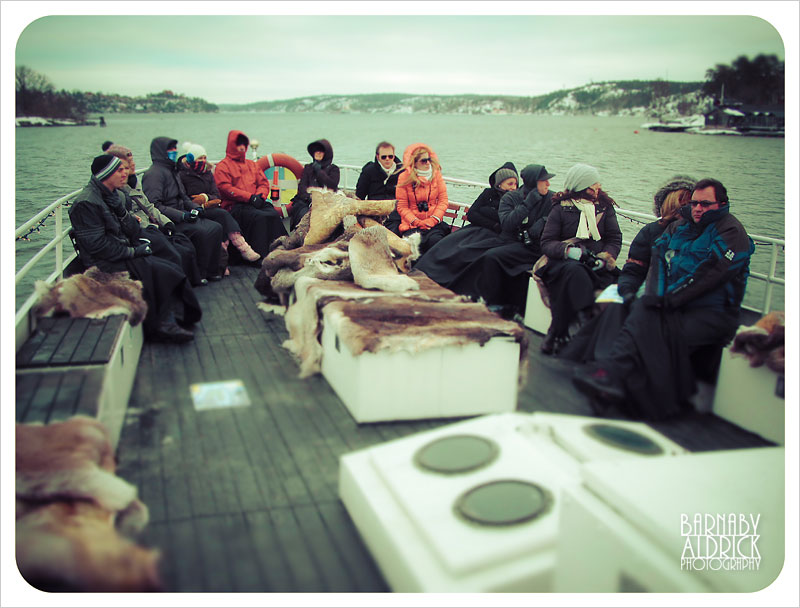 We took a chilly little boat trip round some of the islands of the Archipelago.  In the summer you can do it on in a small speedboat!

Those reindeer skins were have been a good idea if they weren’t soaked with rain. 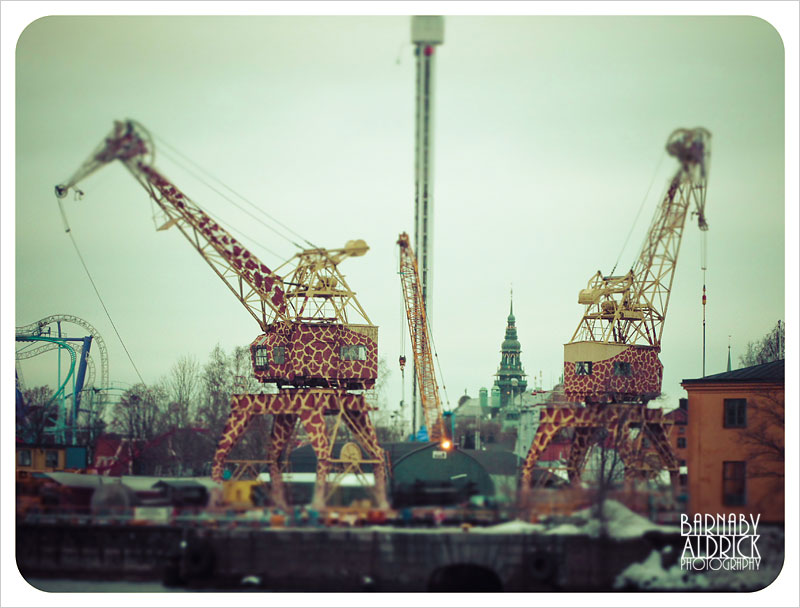 It was fun to see how the cranes on the docks had been painted as giraffes! 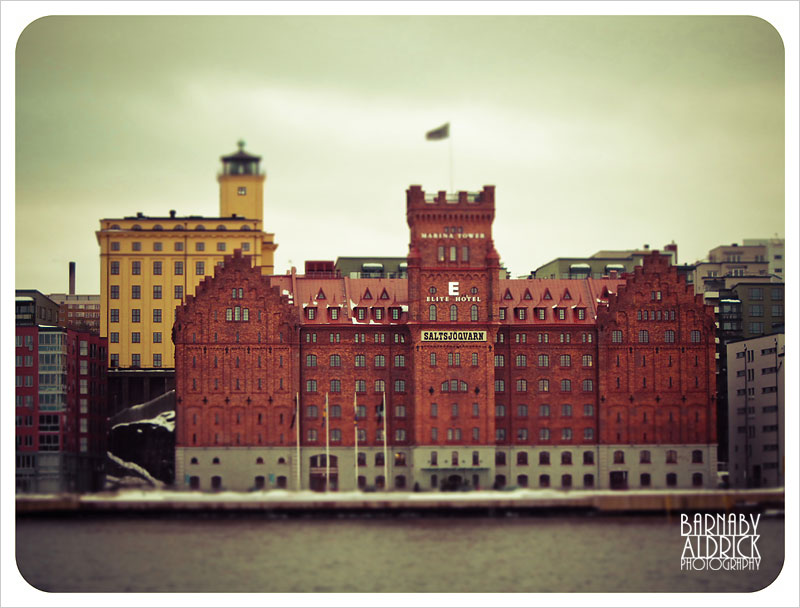 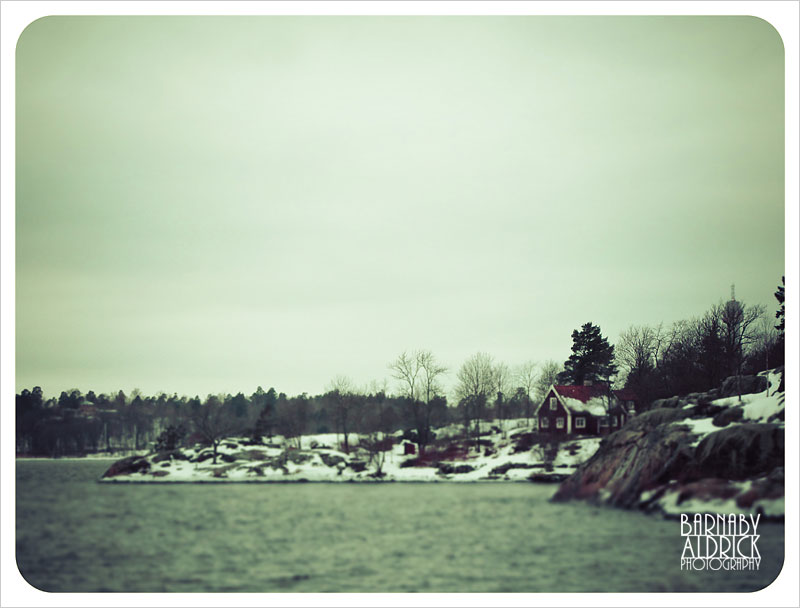 The islands get quite isolated in the winter 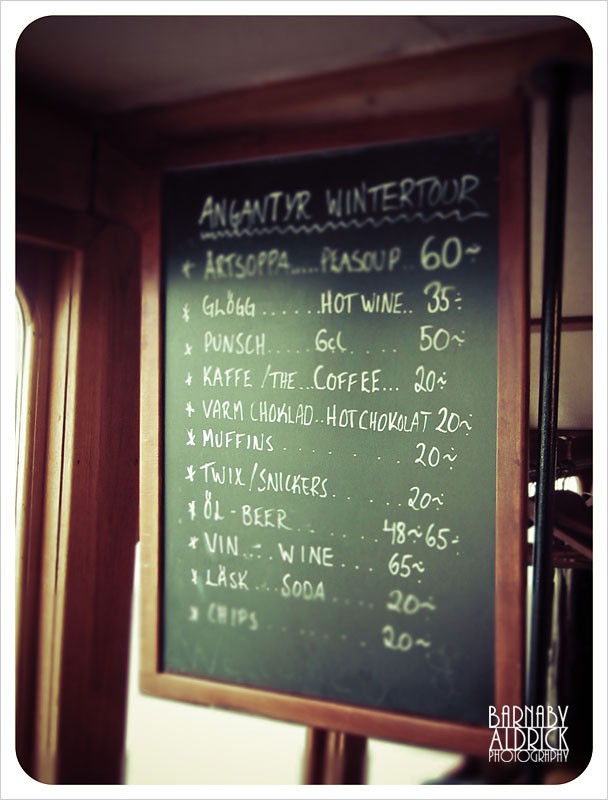 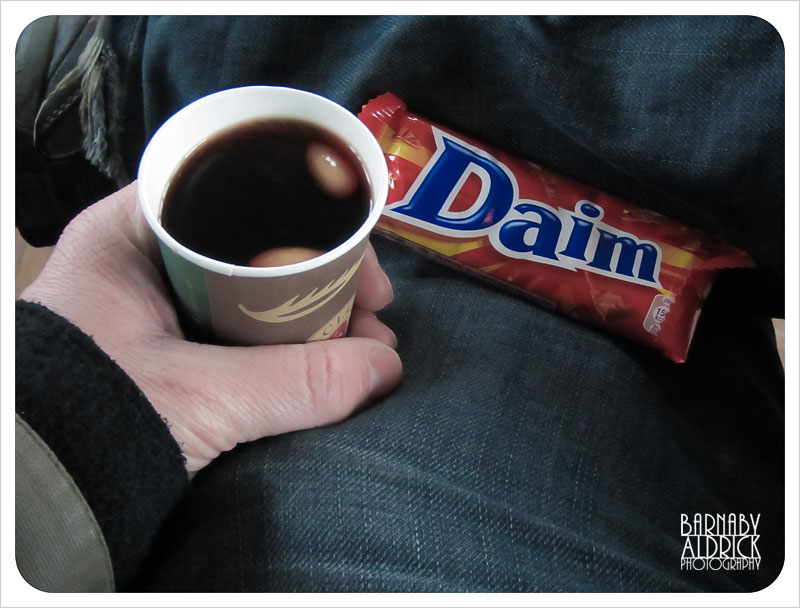 Glogg and Daim!  Even better! 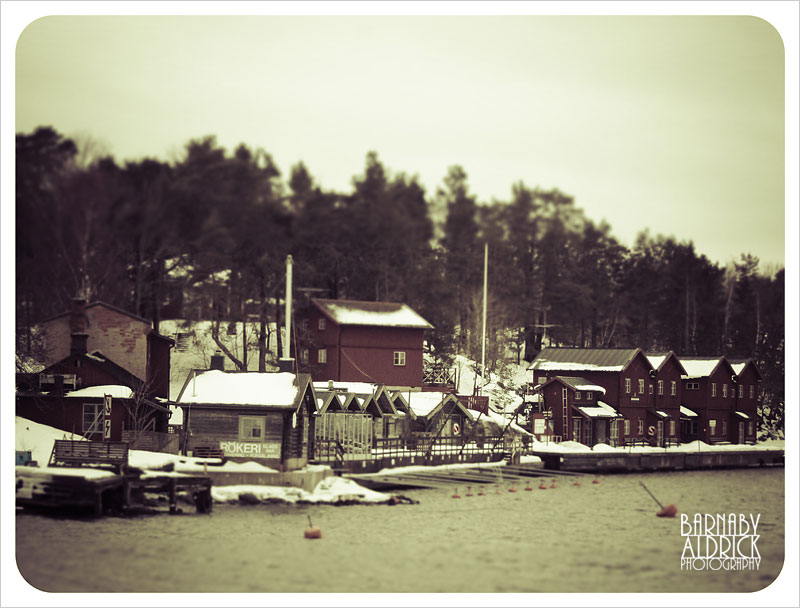 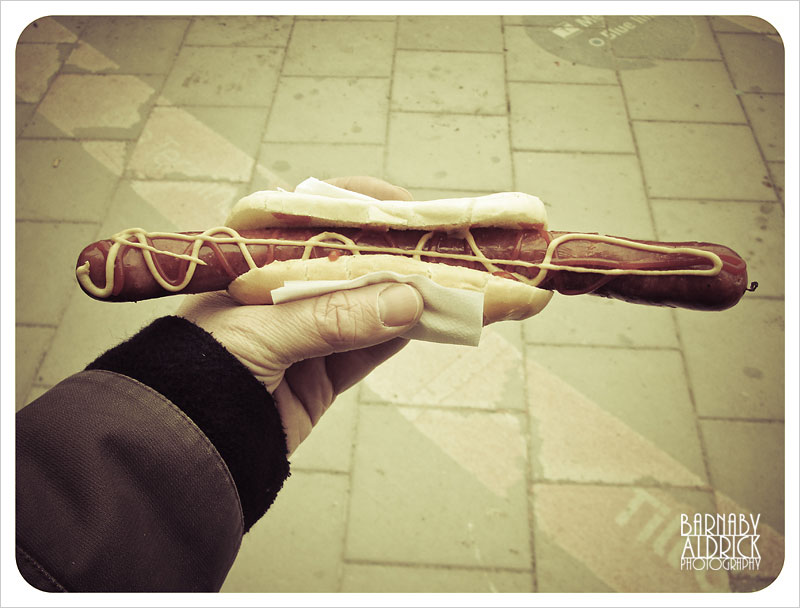 Before we headed off, we treated ourselves to a final hotdog.  When you’ve skidded and trudged around icy streets, a hotdog is heaven in a bun! 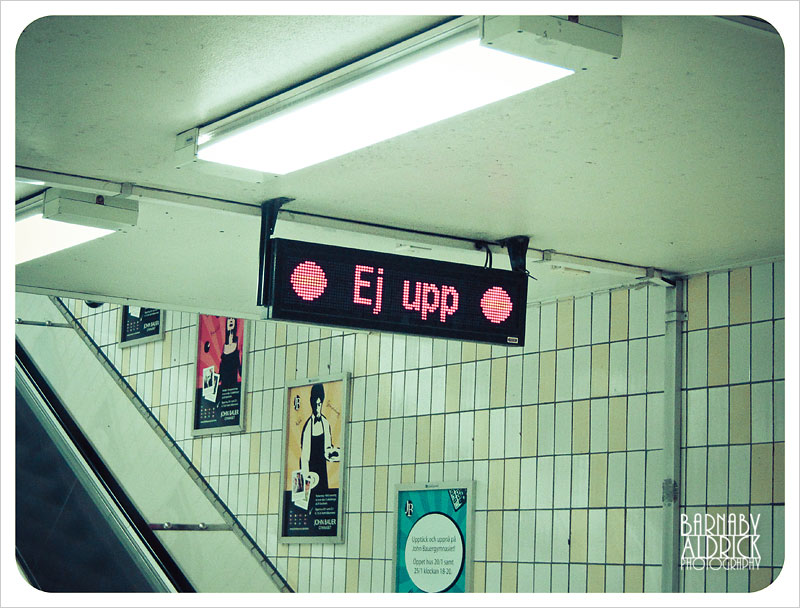 Eh up!  This made me smile. 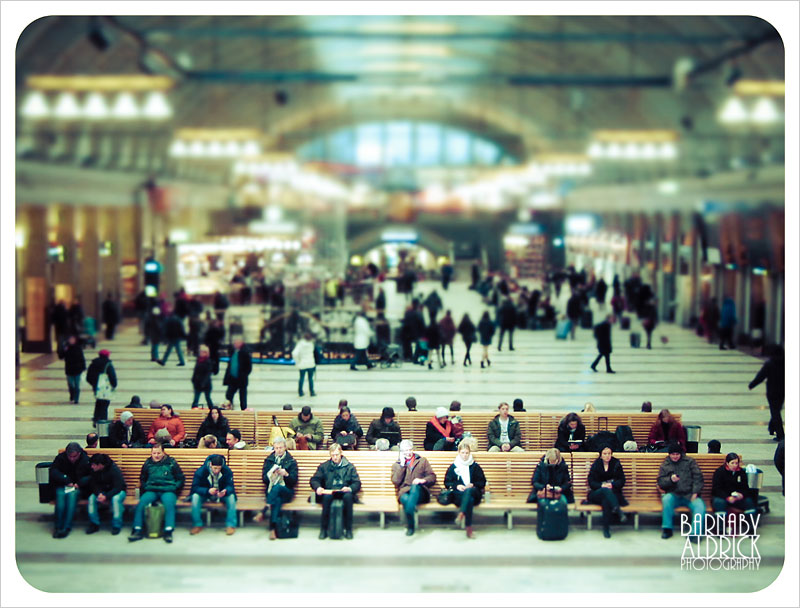 And here’s another good example of a tilt-shift shot at the central station before heading out to the airport.

Hope you enjoyed seeing Stockholm through my eyes!  We had a great time.

But I’d suggest perhaps visiting in the Summer…