Man – where did April go?  Time certainly is airborne, eh?

I’ve just found a moment to unearth & process the images from last months Sunday Service (the monthly acoustic band night I host in Leeds centre).  It was such an excellent gig last month.  We had three amazing bands along to wow the packed crowd.  Two members of Black Carousel, March of Dimes and Pilla.  I’m so proud to be at the helm of the night, as it’s been going from strength to strength and is somehow consistently ace, thanks to the new bands and old faves who keep coming down to play for free to our ‘congregation’.  The bar pays the bands in beer, I pay them in photography and the crowd pay their transport when our wee collection box goes round. 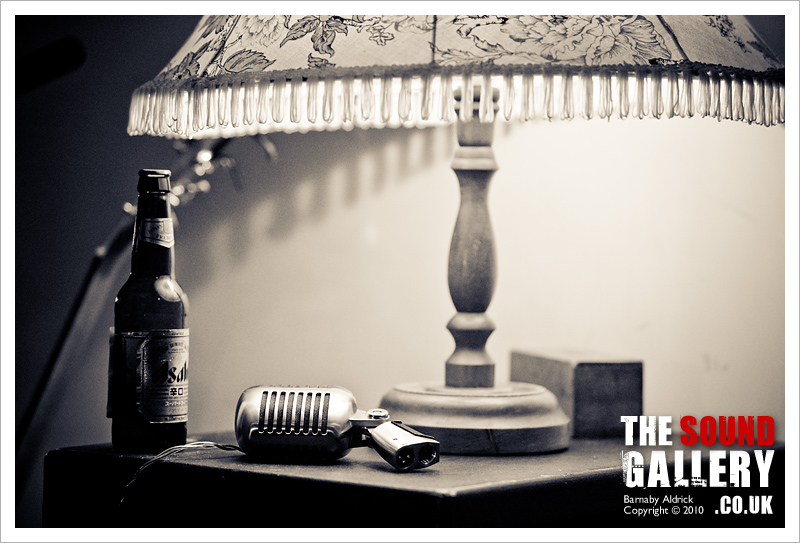 There’s they all are – the SS still life. The lamp is my contribution, the collection box for the people to put in, beer from Verve & the mic for the music.

It’s a egalitarian system that just about maintains the caliber of acts we like down.

The last band on stage that night, Black Carousel, are usually a 5-piece, but 3 of their total have bailed for their Irish homeland; leaving Gaz & Allesandro to chalk up something a bit new.  They wrapped the night up in style, serving a refreshingly lazy folk and blues style of years gone by. 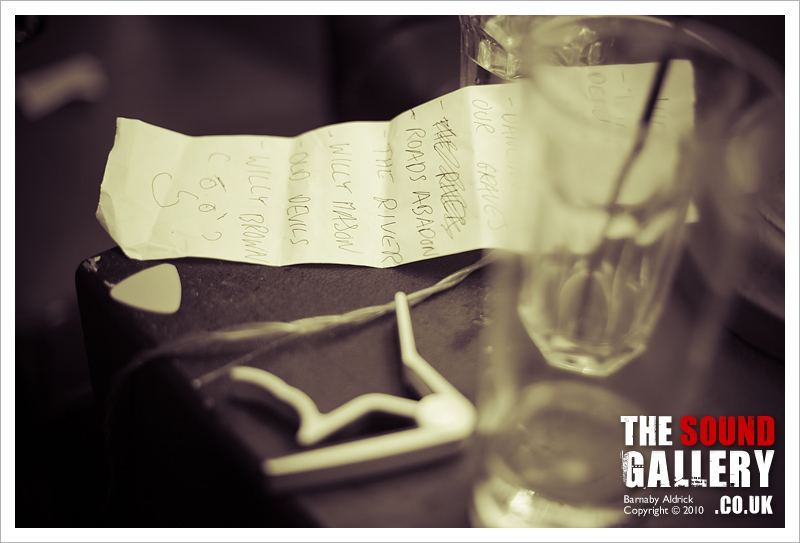 This was a cheeky catch of Gaz’s setlist. 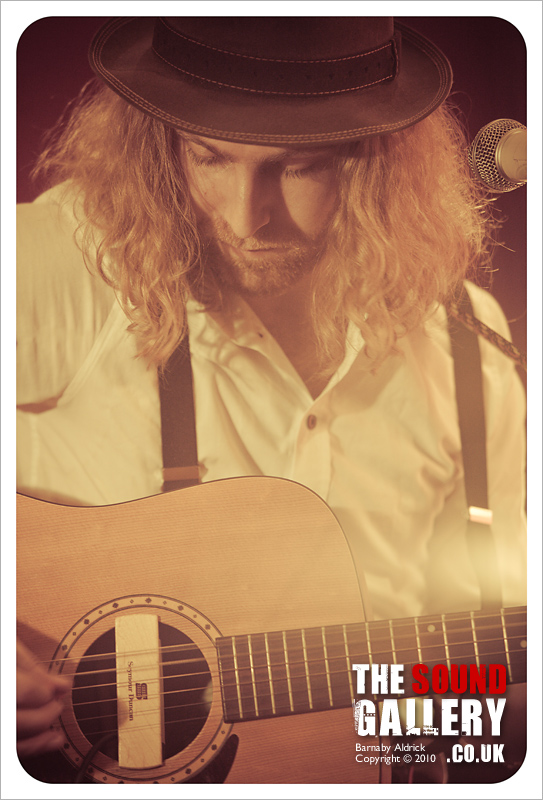 And this is Gaz.  What a dude, workin’ that Wurzle Gummidge chic.

I’ve photographed music all over yonder & beyond(er).  So often at small acoustic nights, the promoter/venue see fit to light the entire stage with one deep red spot, no doubt containing a 20w candle bulb.  Camera’s no likey deep red, as it essentially behaves like a filter covered in mud.  So it’s great to be able to light the stage myself.  I wander through town every SS carrying a bad full of 100W desklamps & a big ol’ granny lampshade I bought at a repossessed furniture shop.   This week I decided to side & back light the solo acts with a lamp.  Normally I just put one either side, but I like the way the light from behind flares in a bit & lights the back of Gaz’s hair.

The vintage processing helps lift the pic too.  I’m using it more and more, and hope it’s not too gimmicky. 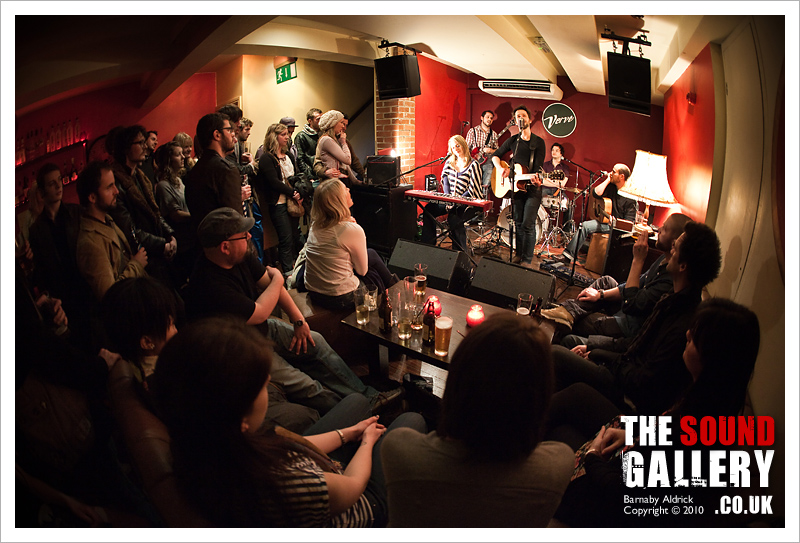 You can see the lamps a bit more on the wide shot of our second act, the March of Dimes.

Regular leedsmusicpromotions legend and often Sunday Service visitor Paul Abraham described the Dimes as follows: “With harmonies to die for, poignant lyrics, strong vocals and tight playing this has to be one of the most rounded and consistent albums of 2008.” They’re now riding a solid new EP and all seem to play about 4 instruments each, so no doubt it’s gonna be bo. 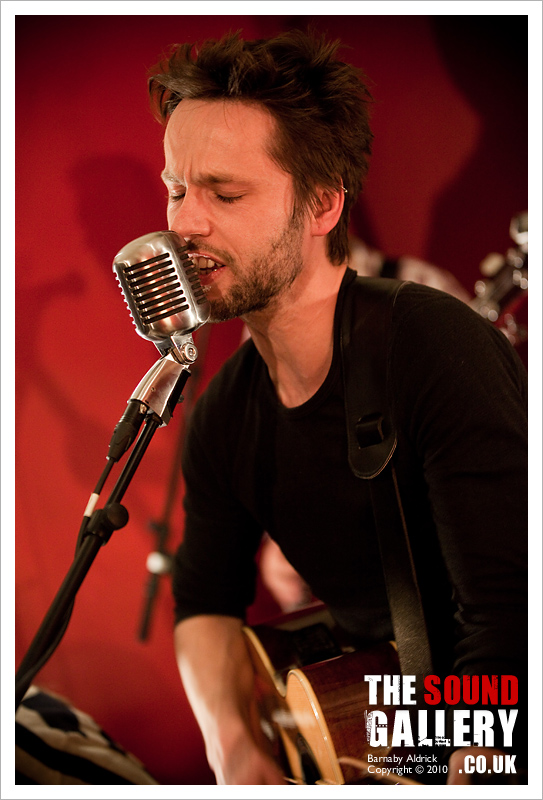 It was a bizarrely special set from these kids. John & Gordon work at The Reliance, my local, and kindly agreed to come down, but there was something in the air during their set.  I think someone dear to John may have died recently as he cried a few times while he played, and the air was electric. 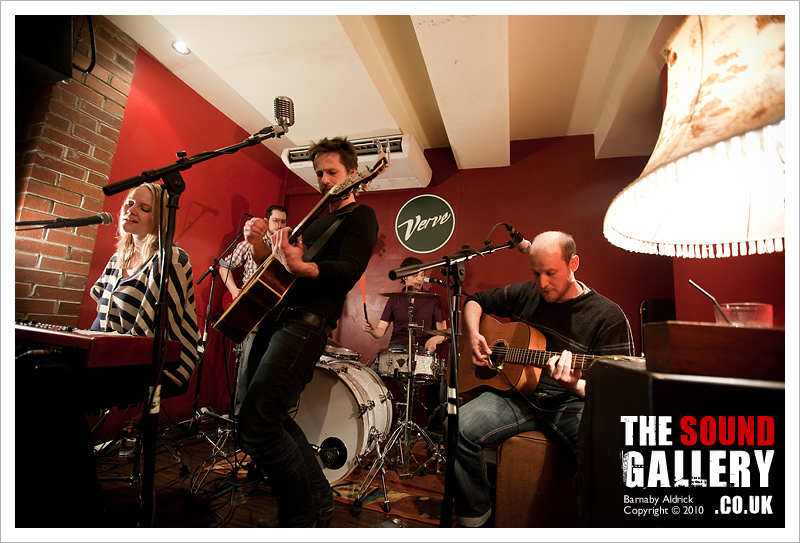 Plus, he had the coolest mic ever. 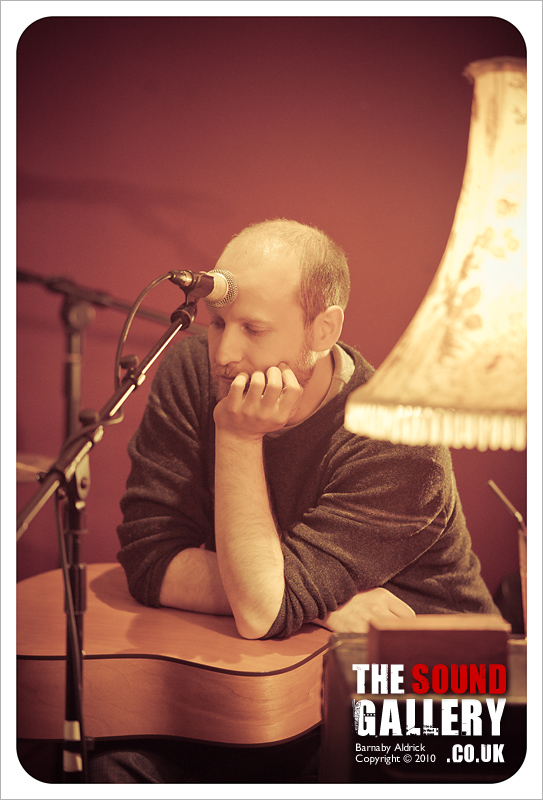 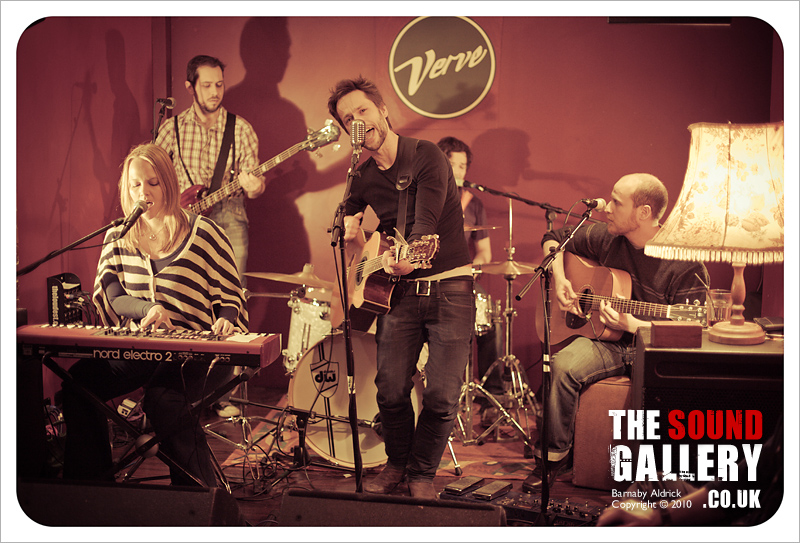 It doesn’t get more Sunday Service than the above pic. 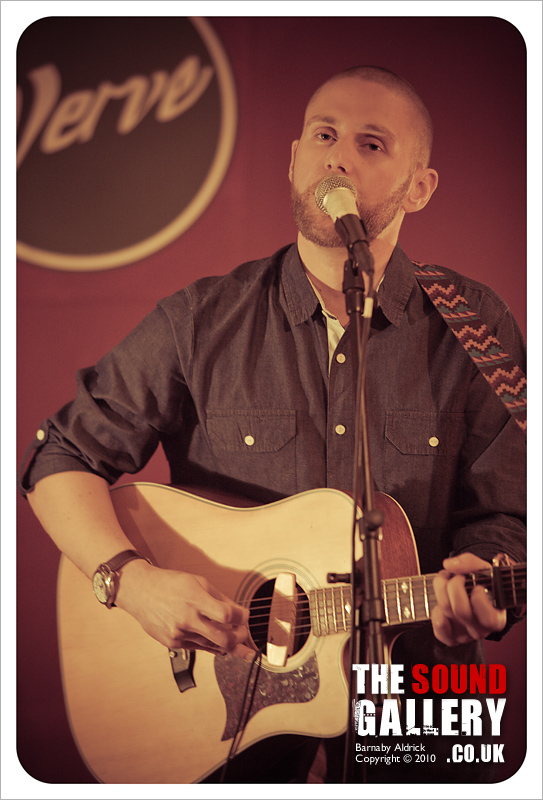 Our opener for March was my homie Dave Rees from Pilla.  I think Dave may have played more Sunday Service’s than any other act so far.  If I had to, I’d more than likely take Pilla as my desert island ‘if-you-could-take-only-one-disc’ disc.

He may look like the kinda chap you’d cross a dark street from, but this guy is a genius – no two ways.  He’s a sharp scouser with an ability to deliver low-fi, bleak storytelling with catchy hooks.  His songs somehow sink in as deeply with the discerning muso as with ears trained on Radio 1. 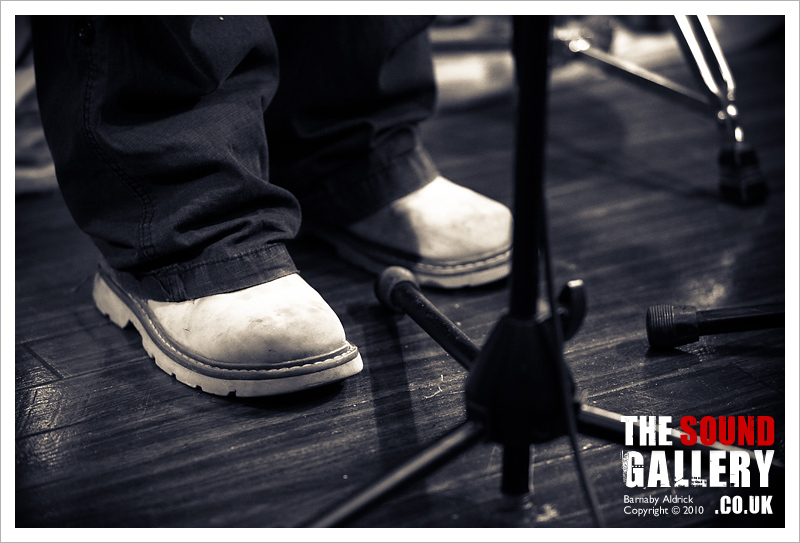 If you get chance, visit Dave’s Myspace &/or Reverbnation sites where he posts his tracks, and let his songs soak on in.  They’ll stick with you. 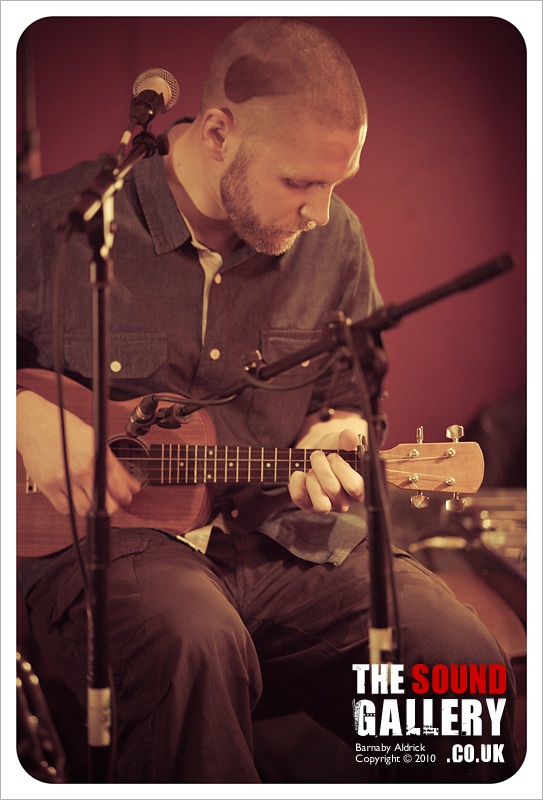 Dave’s been out of the game for a bit, riding a rocky relationship rollercoaster, which have flickered into some seriously beautiful songs.  A few of which are delivered on the Uke he got for Xmas.  We at the SS do like the Uke.

Nearly as much as the cowbell.

I told Rees to burn his new tracks to CD to sell. He humoured me we let people pay what they wanted for them.

One member of the audience paid a tenner.  I love that. 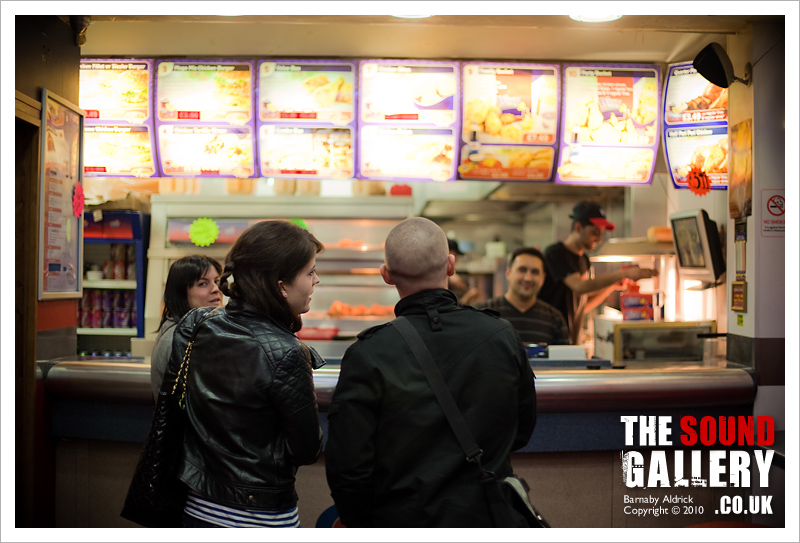 So after free beers had run dry, and a few yarns had been spun, Rees did the first thing any man in the money would do > hit Dixy’s for some Chikan.

I nearly forgot – it’s April’s Sunday Service this Sunday, so if you’re about, we’ve got more free musical adventures from Hope & Social, Nelsons Touch, Ann Drury & Palooka! If you’re in the area, jump in at Verve Bar from 19.45. More the merrier.