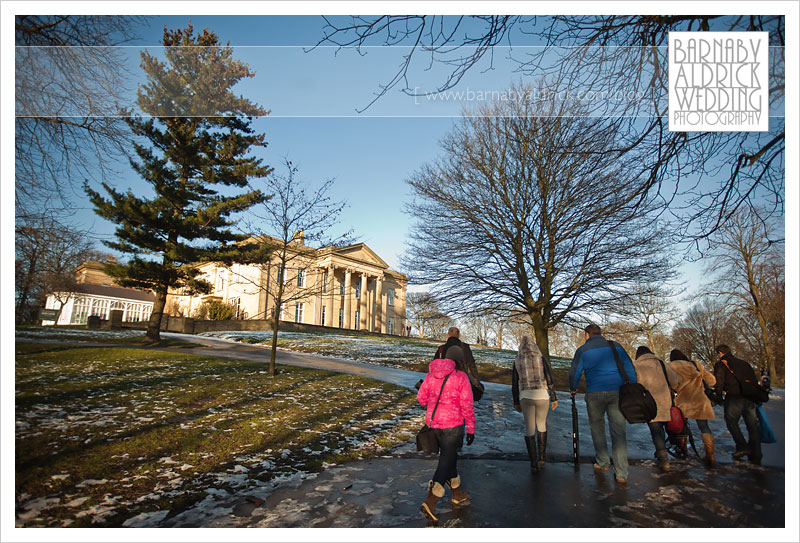 I’m fortunate enough to be in a network of ace UK photographers & last Monday I joined a few of them at The Mansion in Roundhay Park for a flash day! 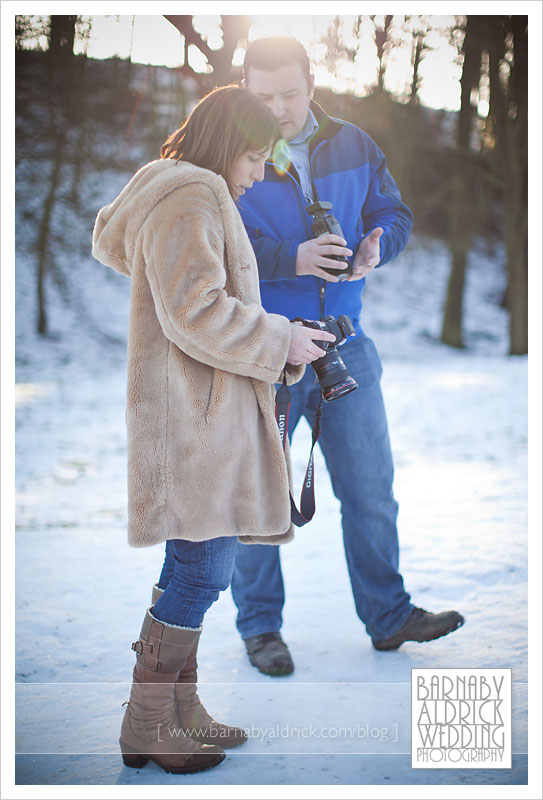 Basically my pal Cris Matthews – AKA: ‘Flash’ Matthews – (here with the lovely Suzy Mitchell) had volunteered to share his knowledge of flash to the network… 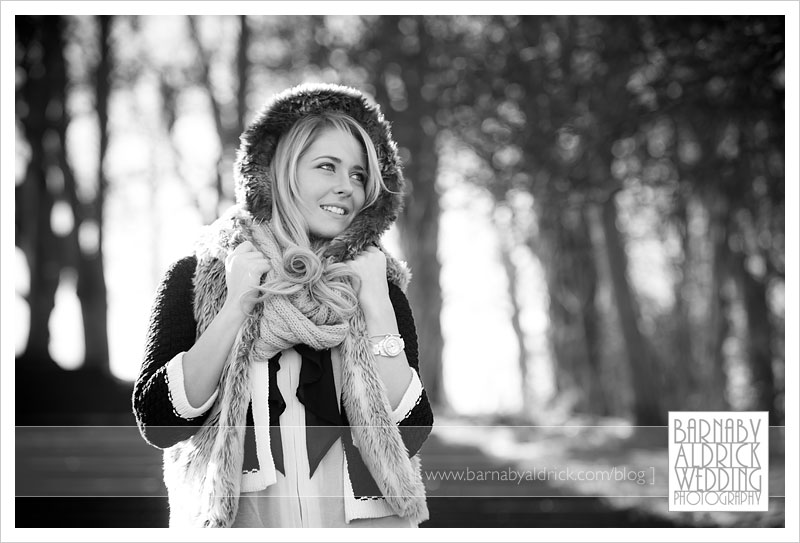 He’d arranged professional model, Stefanie Rycraft Jones (who we’ve both photographed many times before), to join us as our subject.

Having a pro model makes the whole process infinitely easier than trying to photograph each other, and Stef’s a dream to shoot. 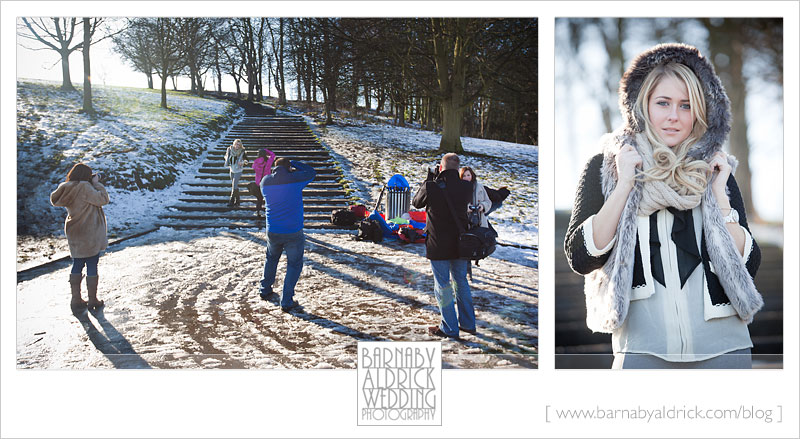 ‘Flash’ informed us to kick off by shooting Stef the way we would usually, in natural light.

We all took turns posing Stef (in front of one another, which was initially a bit weird) and it was really interesting seeing the different ways pro’s shoot. 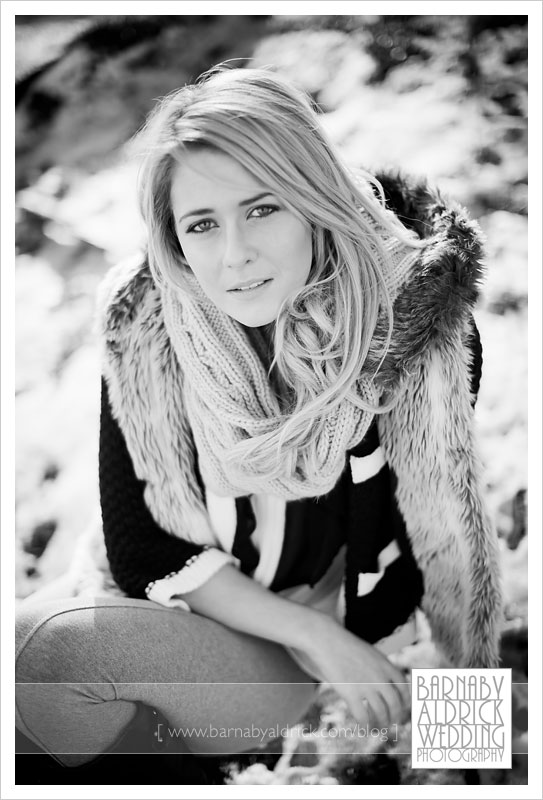 As I said, models like Stef are so easy to shoot, she hears you trigger the shutter a couple of times, and she switches up and does something new.

Like the rest of the gang who came along to learn with Cris, I’m more comfortable shooting portraits by natural light.  I’ll generally find a pool of good light and kick use 20% positioning and 80% personality (ie. me talking rubbish) to get people to relax into a smile.  With Stef it wasn’t necessary to even get a smile, cos even with a serious face on she looks amazing. 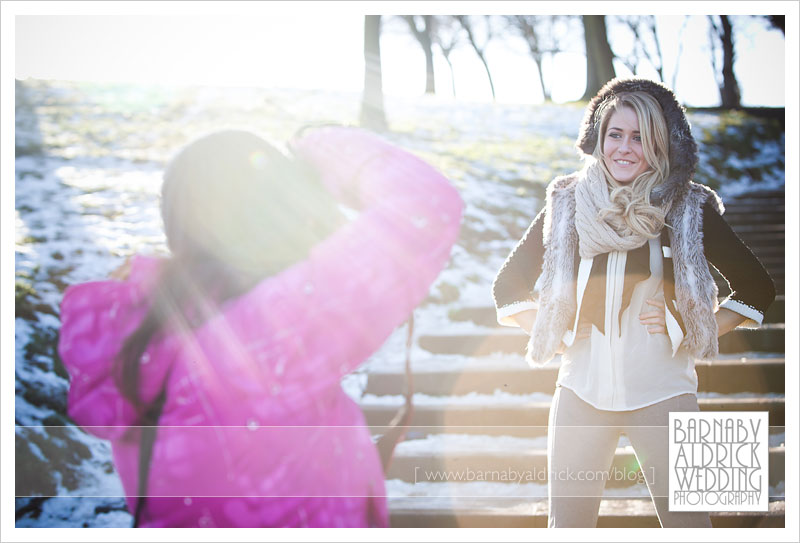 It was a snowy day, awash with low winter sun; not quite what you’d be shooting in to employ flash, but perfect for back-lit natural light work! 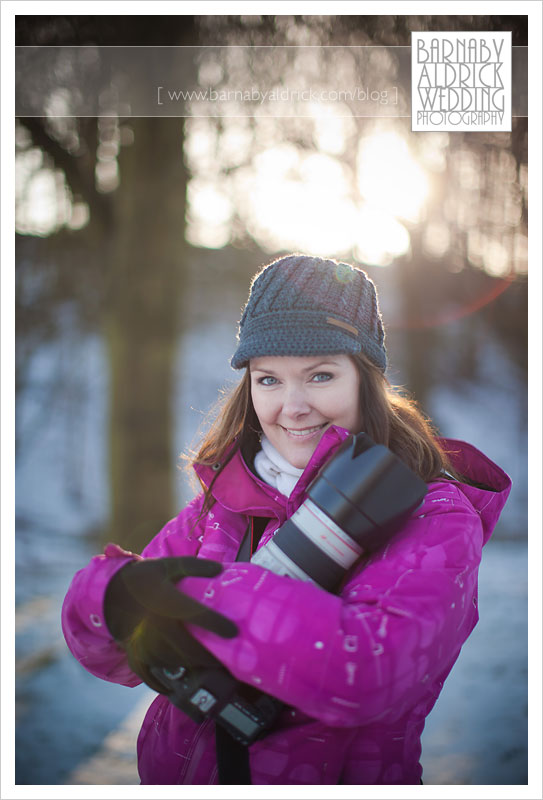 I thought I’d snap a few portraits of my buddies, and here’s one the lovely award-winning York based snapper, Anne-Marie King! 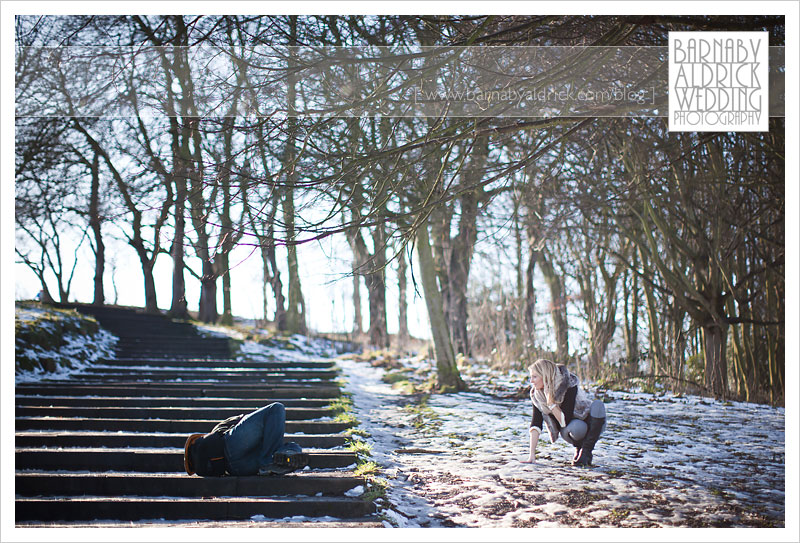 Photoshop legend Mr Tom Arber, getting down and dirty! 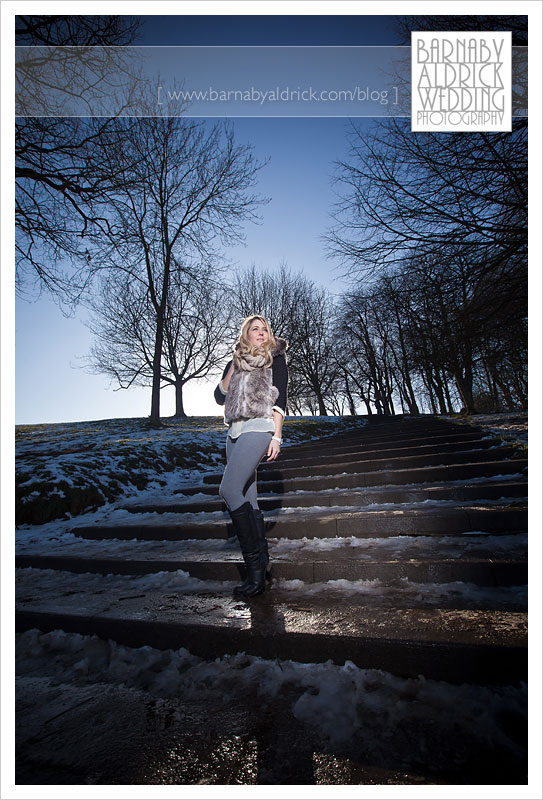 Then once we’d all settled into our natural light groove, Flash showed us how he’d approach lighting an image such as this, even in evil bright conditions such as today.  We dialled in our sync speed shutters (1/200th), set the flash to manual at full power, dialled in our aperture & ISOs to expose for the background (AKA: the ‘ambient’), aim the flash ‘down the nose’ and tweak settings accordingly.

The resultant shot I caught above is quite dramatic, and quite different from my usual style 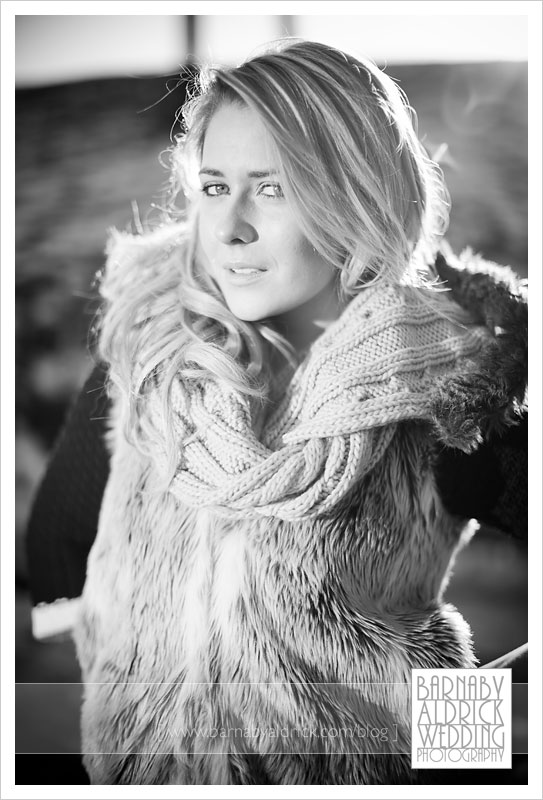 Here’s another, lit from the left hand side, using the sun as a hair light. 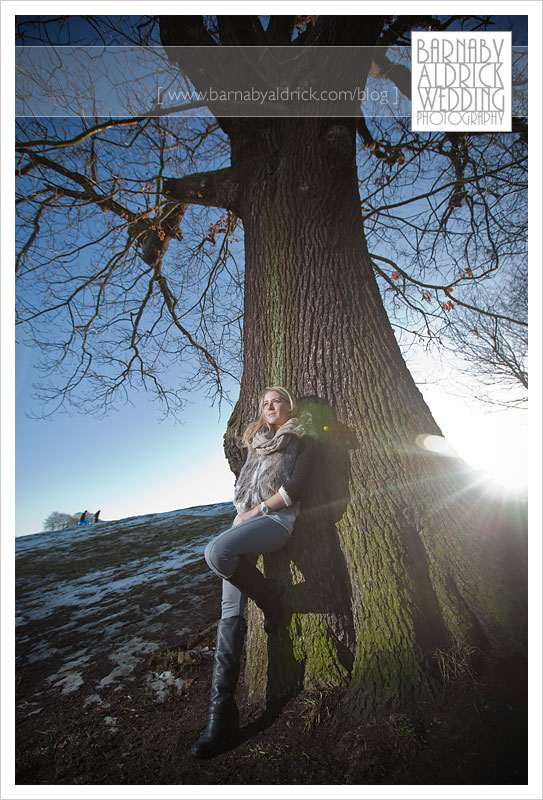 Resting against a tree, technically in ‘flat light’ we managed to give the shot some drama shooting the flash from stage left 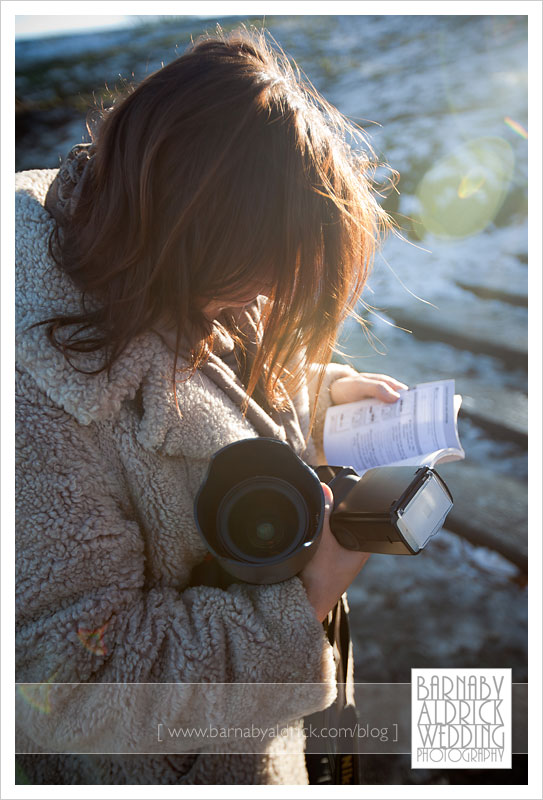 Nothing to be ashamed of getting the ol’ manual out to familiarise oneself with the gun! 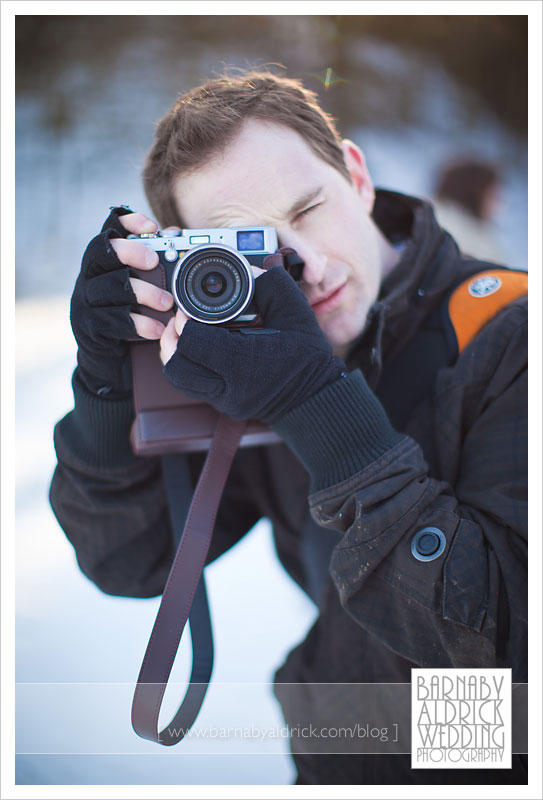 I had a play and it’s a beauty.

Fuji are leading the class with these ‘rangefinder’ style cameras, and will soon be releasing the interchangeable lens rangefinder Fuji X1-Pro – which could arguably offer an alternative camera type altogether for photojournalistic wedding photographers. 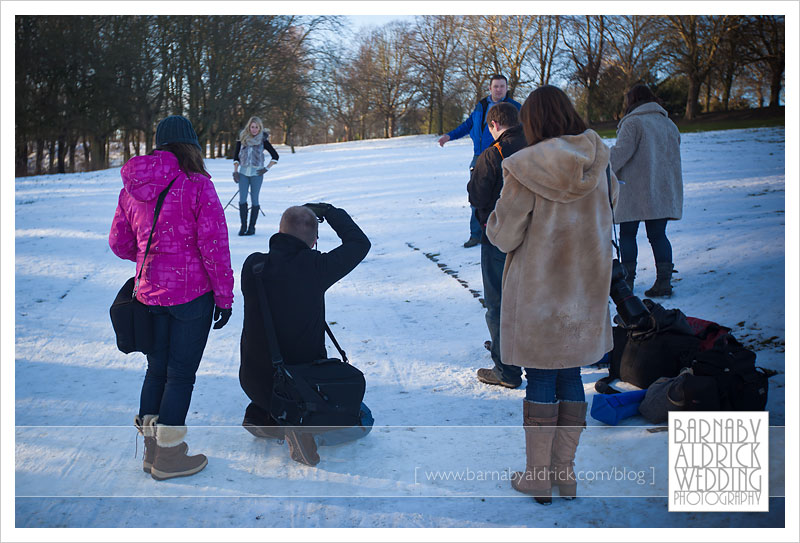 Anyhoos – after our initial expose / down the nose lesson, we found some shade & went onto 2 flash, backlight & front lighting setups, which gives the effect of the sunny backlit look, without the sunny! 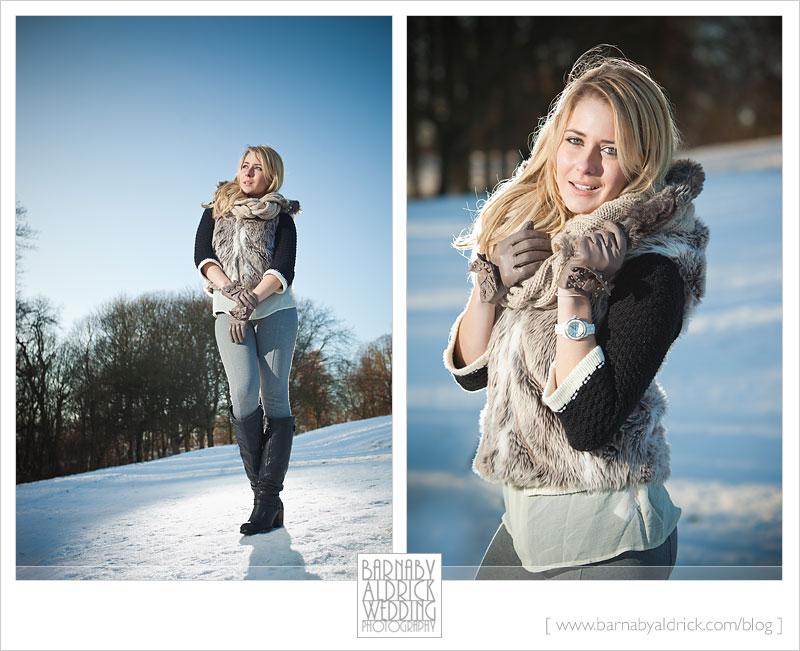 Here are two shots I liked with this technique.  The backlight gives a great hair light, and with a wide enough shot, also sends funky shadows raking across the floor from the subject’s feet.

I often adopt this kind of flash system for my first dance images. 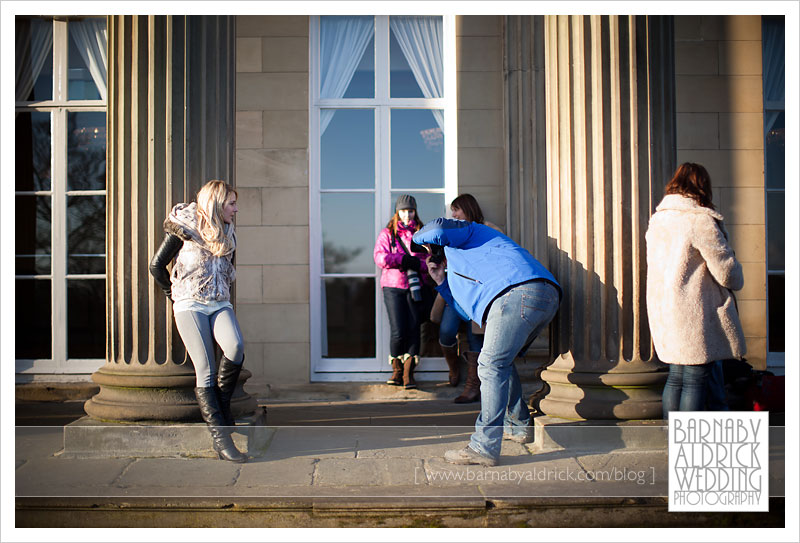 We next headed up to The Mansion, a fabulous Roundhay Park wedding venue I’ve shot at loads, run by the ace event company ‘Dine-Services‘ 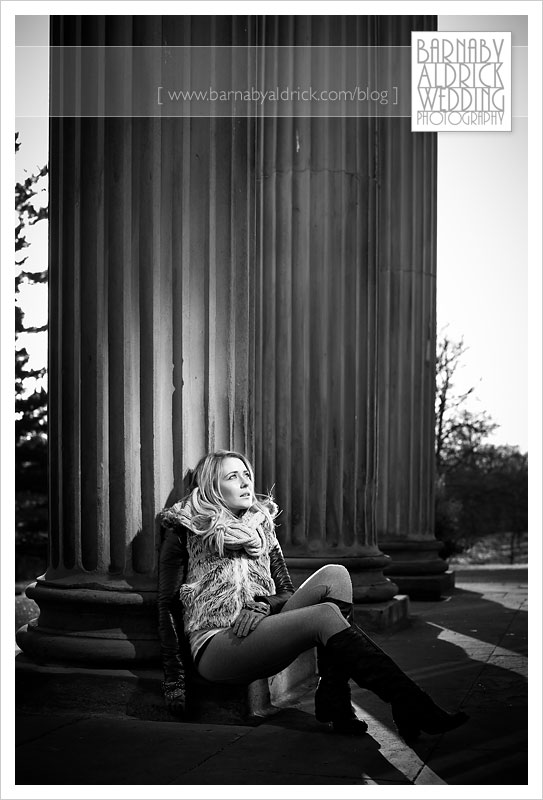 Again, we had to cower in the shade, away from the blazing sunshine, to be able to create dramatic flash portraiture! 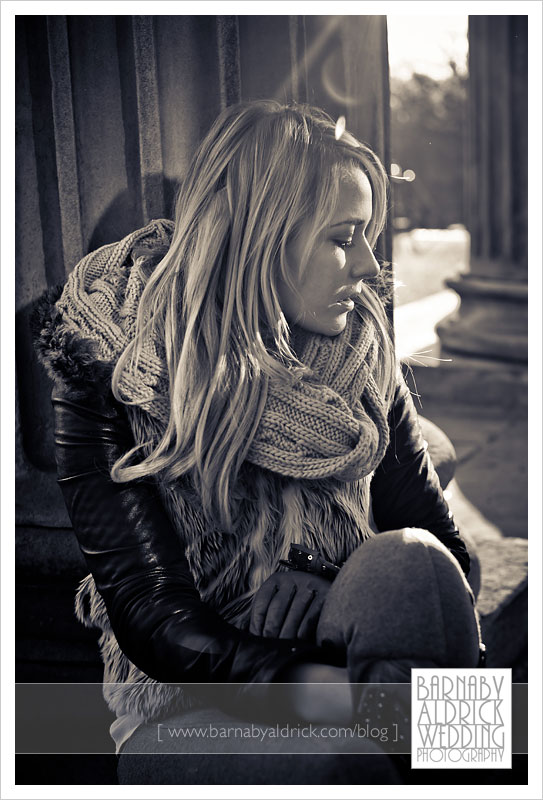 I asked Cris to go way round Stef for this one, for super drama cutting across her face 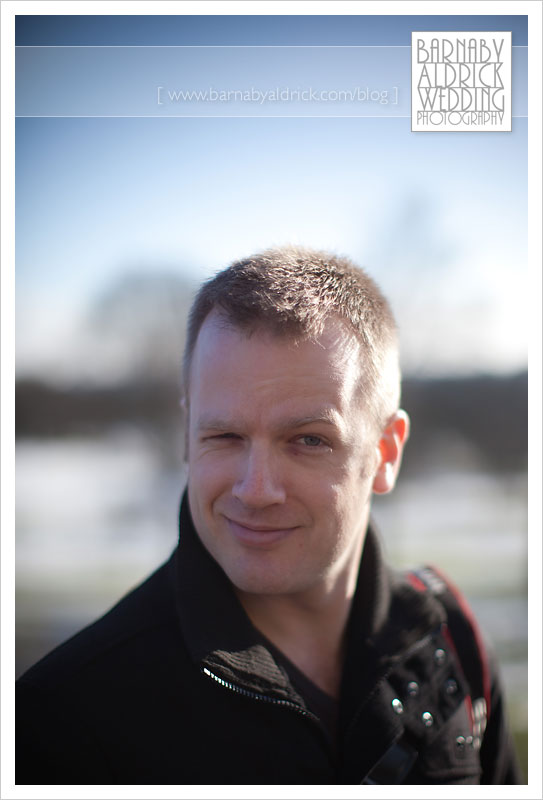 Here’s another of my fellow photo partners in crime, Captain Pete Boyd.  He’s helped me out 2nd shooting at several of my weddings, and is a very fine gent indeed. 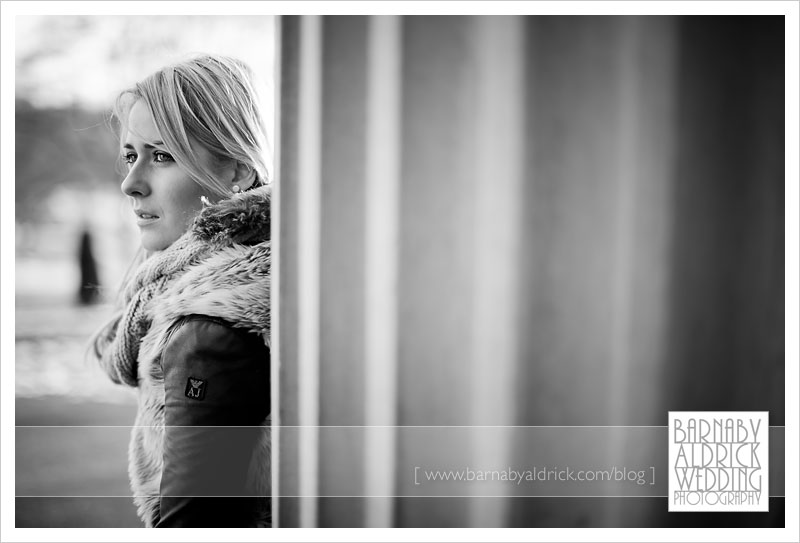 While another of the group were working Stef against a pillar, I rather liked this natural light frame. 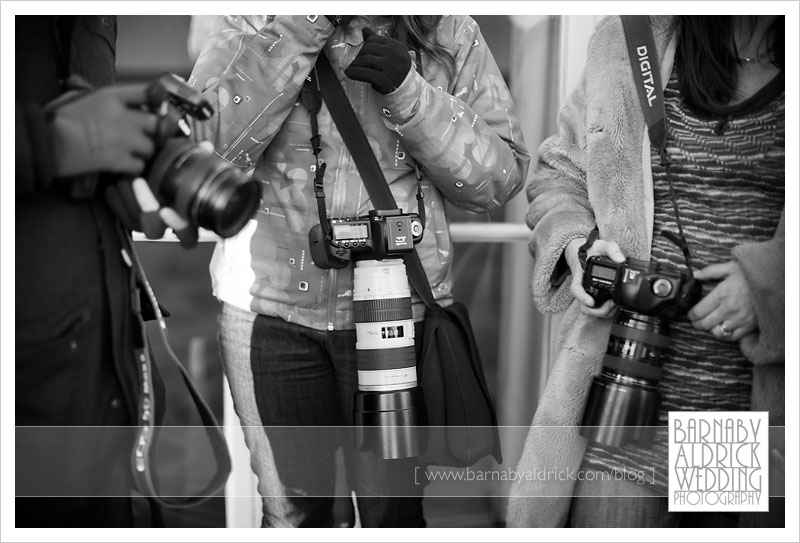 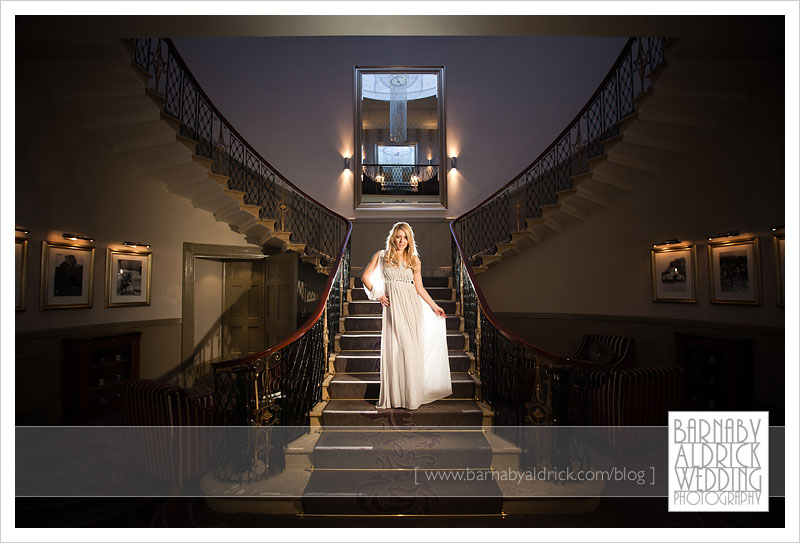 I’d asked the chaps at Dine if they’d mind us using the fab staircase inside The Mansion to shoot a few pics indoors.  As fingers and toeses started to freeze, we ducked in and with Stef in a different outfit, had a play at applying the same front/backlight rule as before.

Again, flash puts drama where there is none. 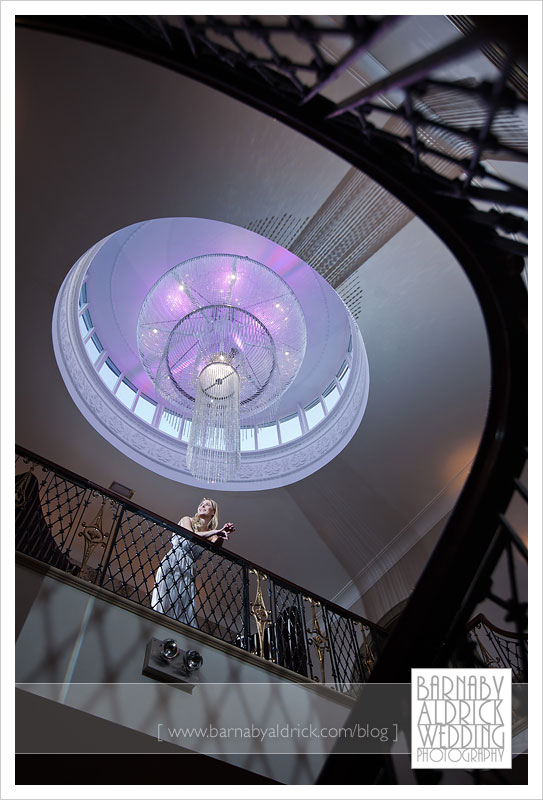 It’s then just down to the framing.

In this one, Cris stood up the stairs flashing towards Stef 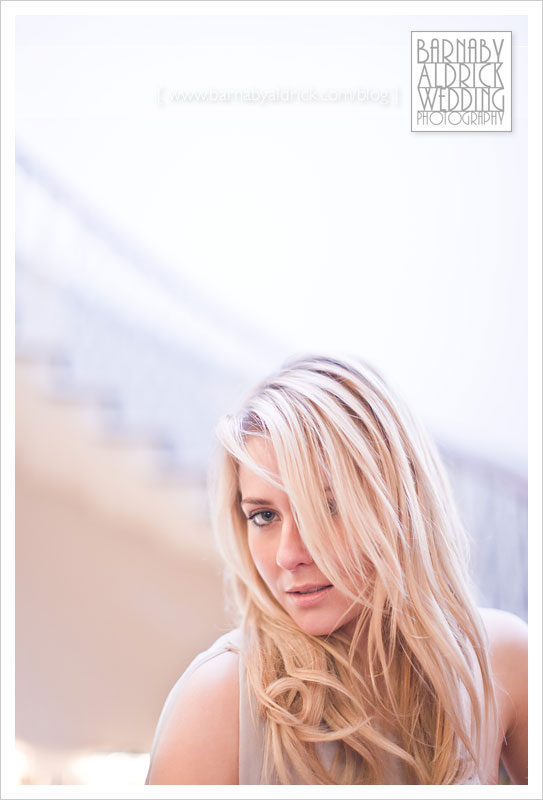 While on the stair case, I couldn’t help myself by shoot a few natural light f1.2 shots on the 50mm.

I love how exposing for Stef has blown the background into a pastel, high key blur. 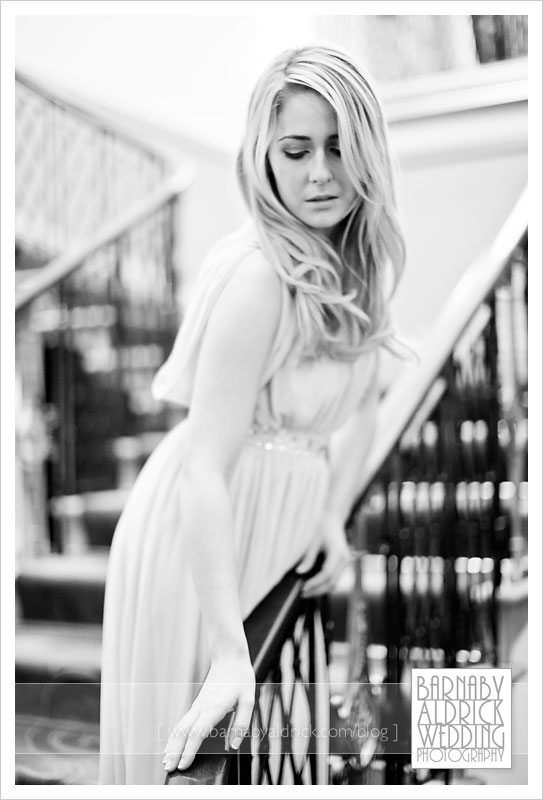 Here’s another, under a quick wash of black & white Lightroom processing. 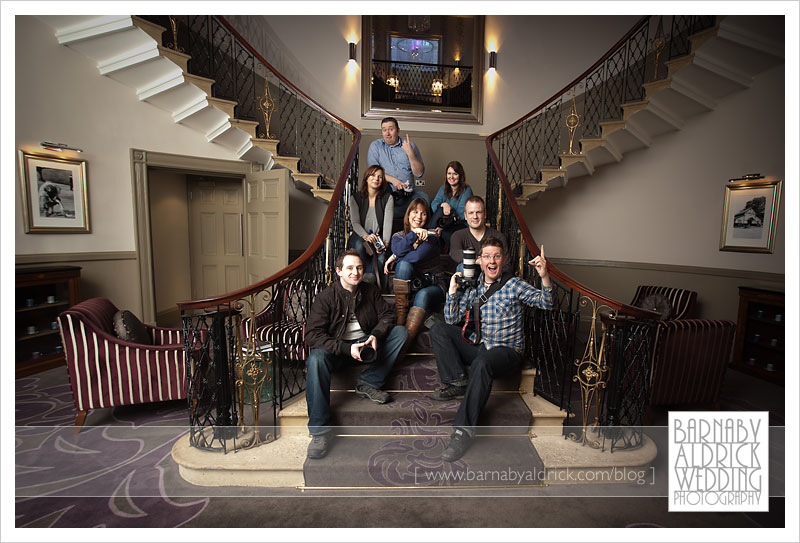 Before we headed our way, I asked Stef to take a quick groupshot (what wedding photographer can’t resist a groupshot!?) of our crew on the stairs.

It’s so great to be in a sharing network of photographers, willing to give up their time to impart their knowledge so we can all be prepared.  Ironically, flash (the photography, not Cris) is a dark art, and it’s a skill that’s fundamental to have in the skills armoury.  It’s not always sunny (particularly on this fair isle…) and not only is it sometimes necessary to draw on it to light indoors, but it can add punch and drama.

So big up Cris Matthews for your time and skills!