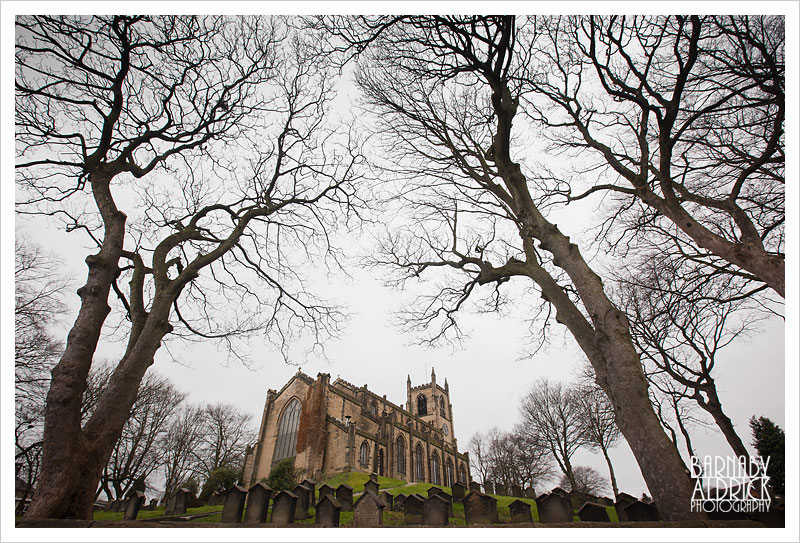 Last week I joined the fabulous Hope & Social band to document yet another of their musical events at their recording studio (AKA: the Crypt) in the less than beautifully-named ‘Liversage’ in Yorkshire. 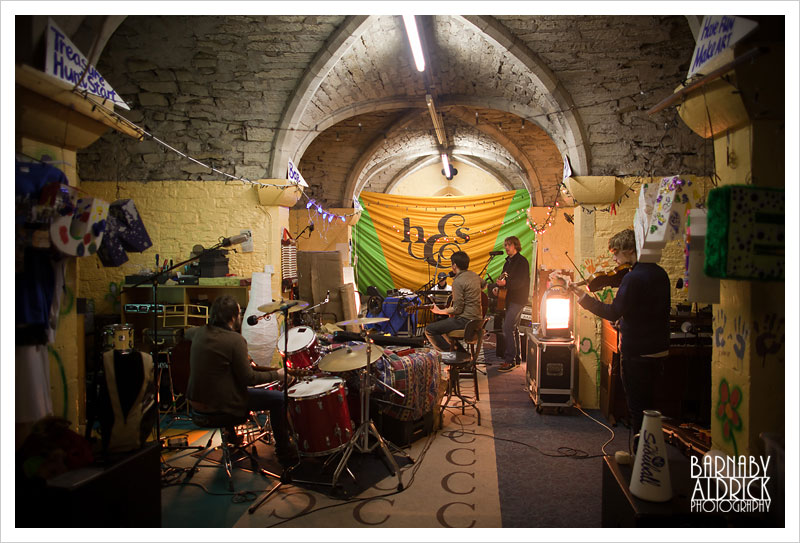 I know the band well and joined them in the afternoon, while they practiced for their evening gig ‘The Big Red Button: Winter Warmer‘ 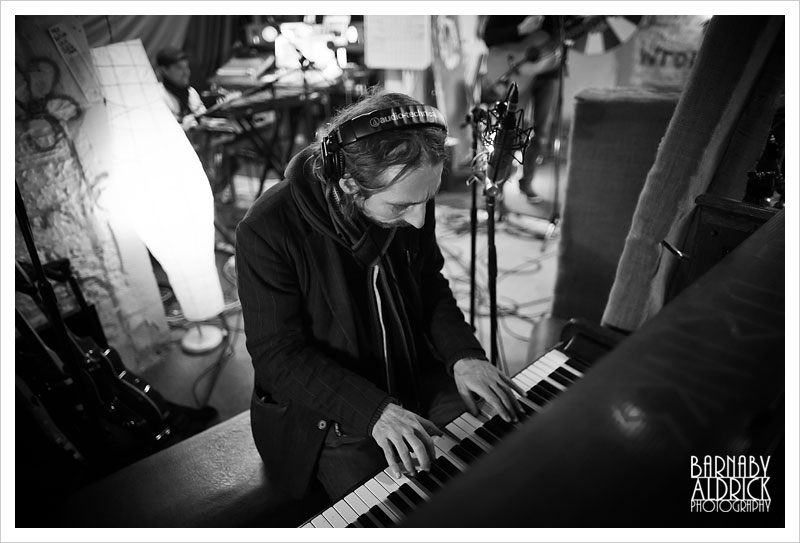 Basically, before Christmas and after a prolific run of albums (6 albums since 2008! All available here!), the band decided that instead of fire into a new album, it might be nice to re-visit and reinvent some of their back catalogue.  So in early December 2011, created a new set (with much swapping and changing from their usual instruments), and played an amazing festive gig called ‘The Winter Warmer’ to the sold out Georgian Theatre in Richmond.

I sadly couldn’t be there, but smiled my way through the entire show on youTube, recorded in astounding clarity by a fan, who’s since playlisted the whole gig for all to enjoy here: Hope and Social Winter Warmer. 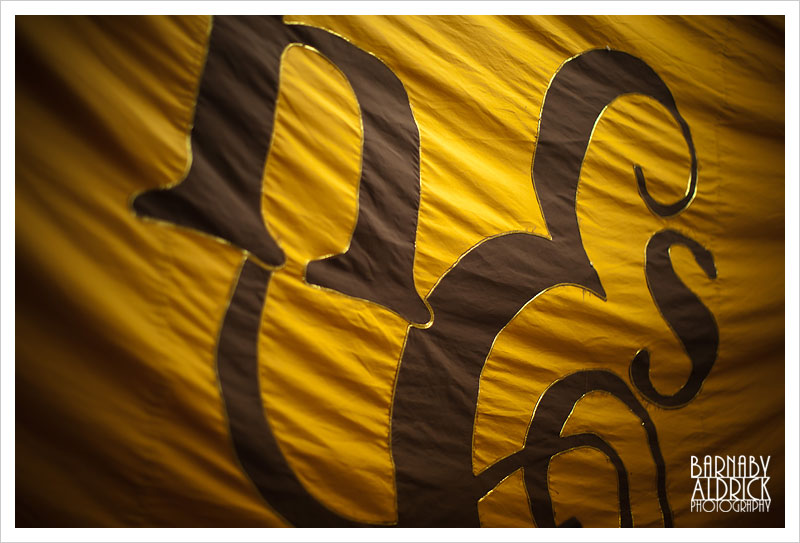 I love the H&S ethos – which before they do anything, they ask themselves 2 questions:

Is it fun?  Is it creative?

If it ticks both boxes, they generally get green-lit 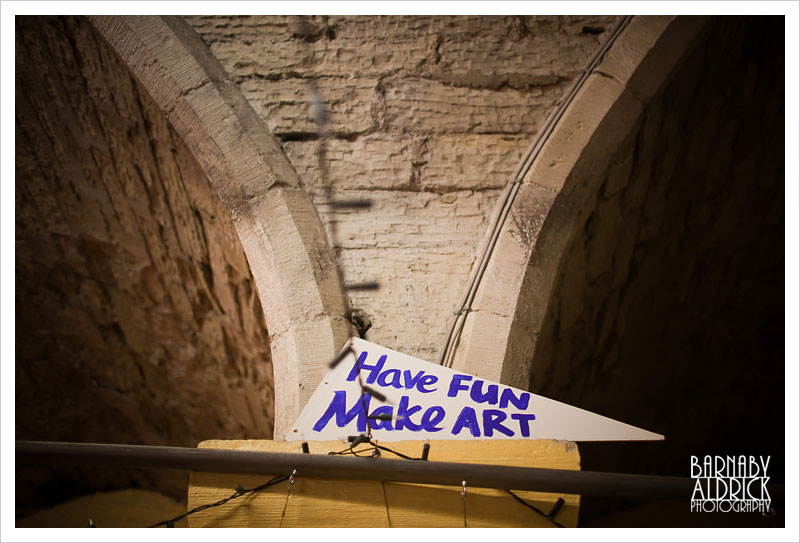 Their ethos is ‘Have Fun, Make Art’ 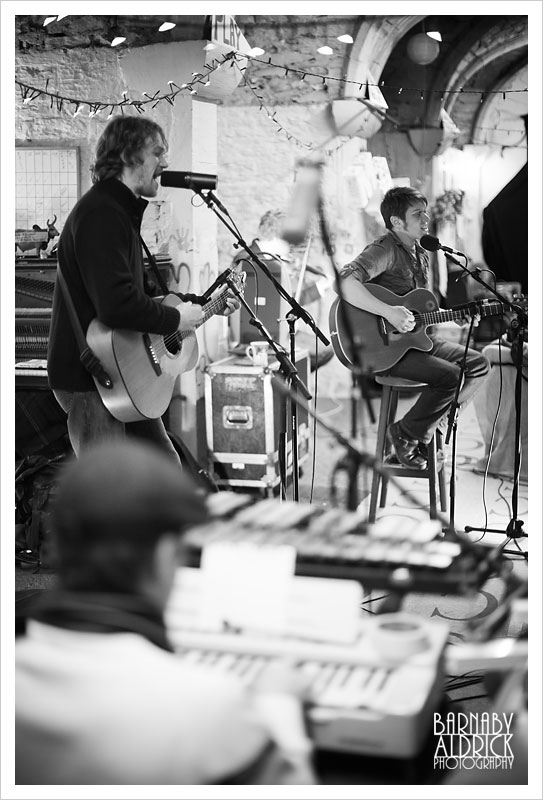 So after the fun and success of the gig, they decided to tidy up & record these new versions for the next album. 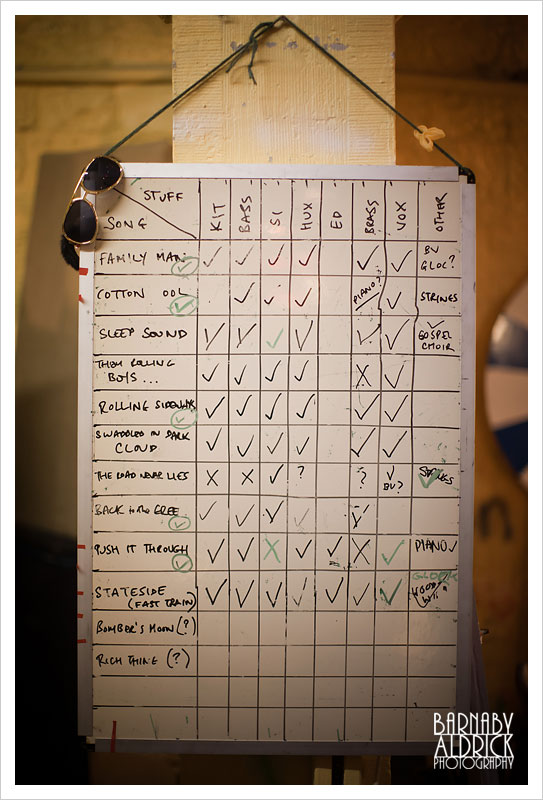 They’d spent the week recording the majority of the tracks, but saved a special few for what has become a bit of a tradition for them, a Big Red Button Night 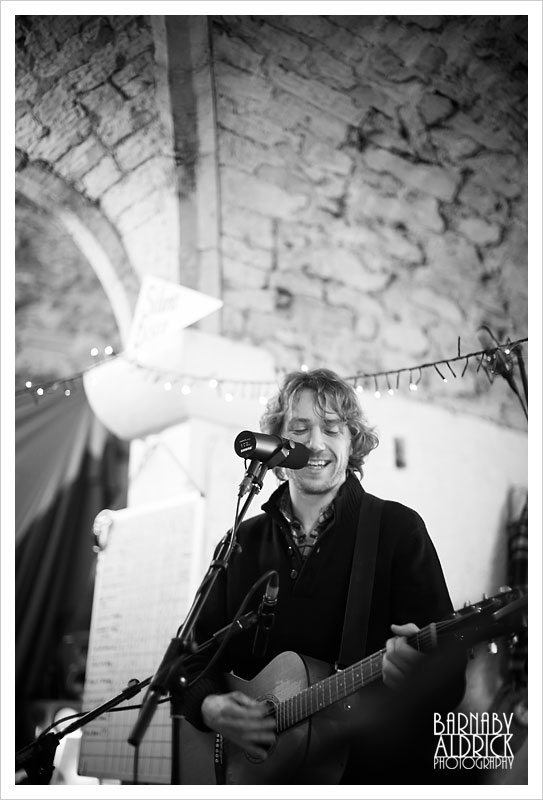 They have a saying at Hope and Social; “the magic happens before the mic”. It’s a lovely simple reminder that Hope and Social is about great music first and foremost, and that great music happens in the real world, in the flesh, on the live side of the microphone. It’s that raw and alive feeling that they try and capture in their records.

It’s a chance for fans to see how they capture the music, and to compare what they hear to how it sounds when it comes out on record. 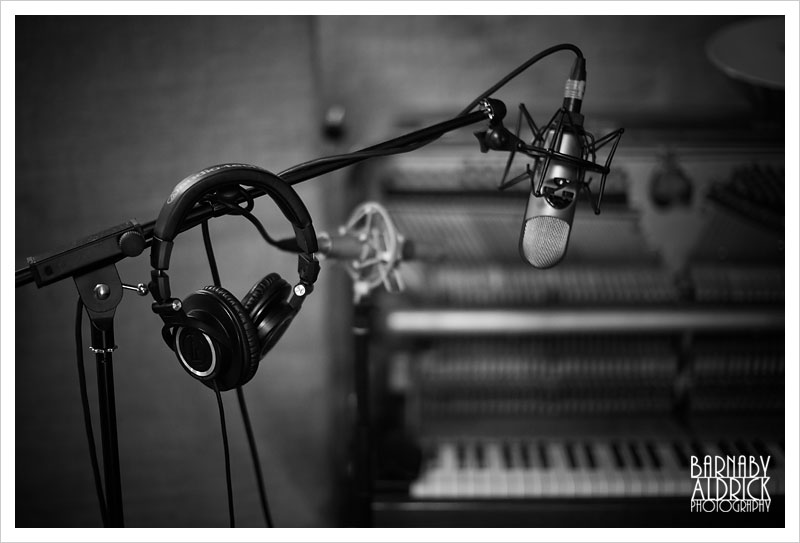 (Incidentally, there is no big red button, its just the F12 Key on the keyboard that Ed’s coloured a bit red with a marker) 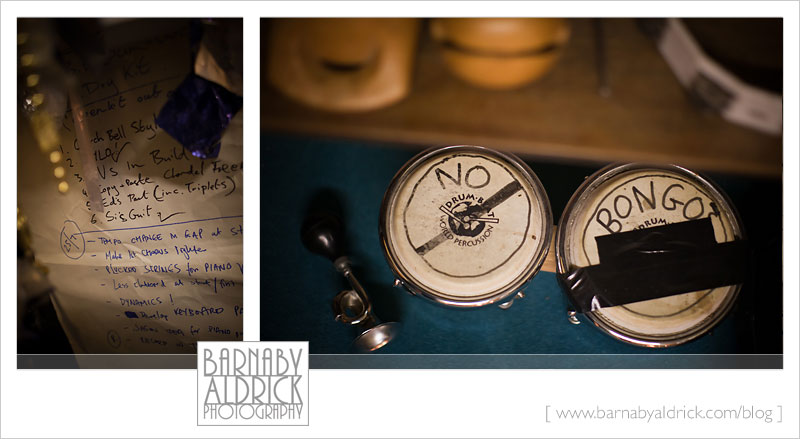 During the day I got to wander round their studio, bursting with memorabilia from past sessions & events 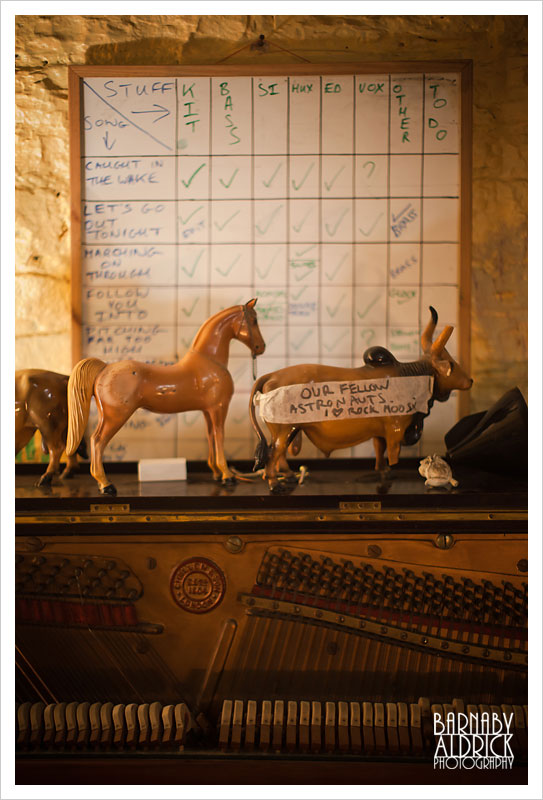 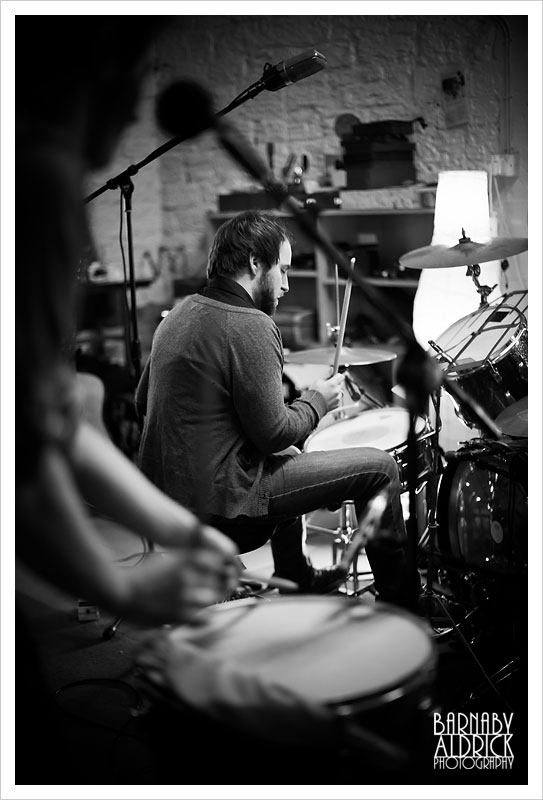 But I’m always excited by just being in the studio with them, documenting these gifted chaps doing their thing 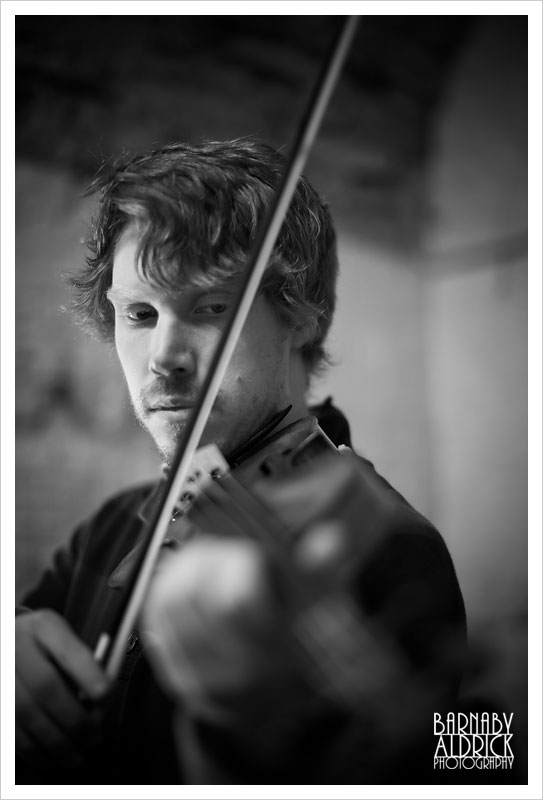 In some ways, photographing a band recording is a bit like photographing a bride on the morning of their wedding; where you’re granted open access into someone’s private inner sanctum, and trusted to do what you do. 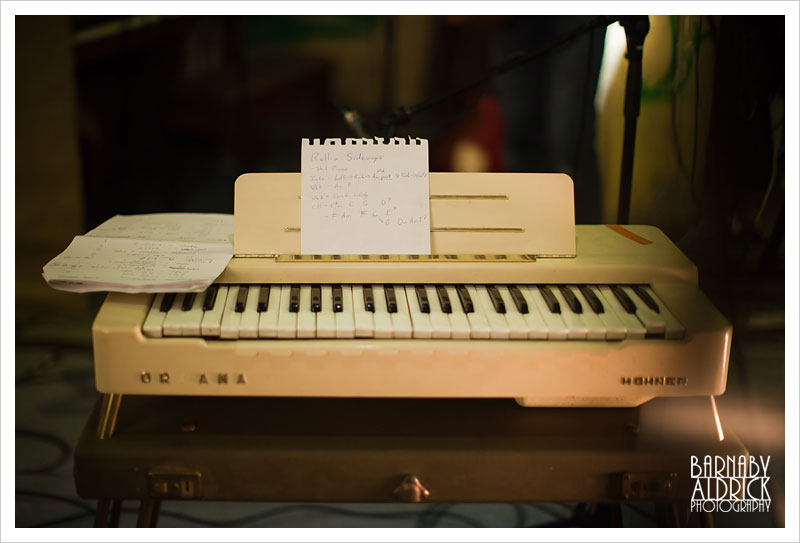 Plus with all this cool stuff everywhere, it’s hard to go wrong really. 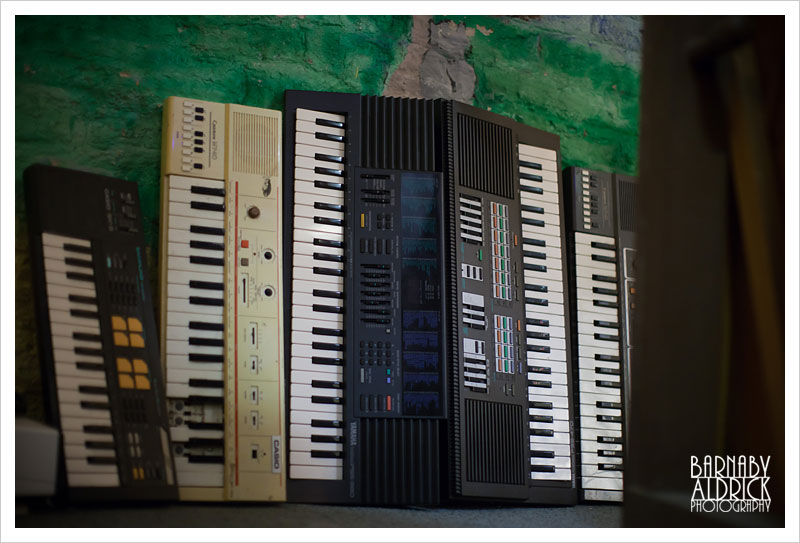 Buried behind things is a bit a graveyard for Ed’s obscure keyboards. 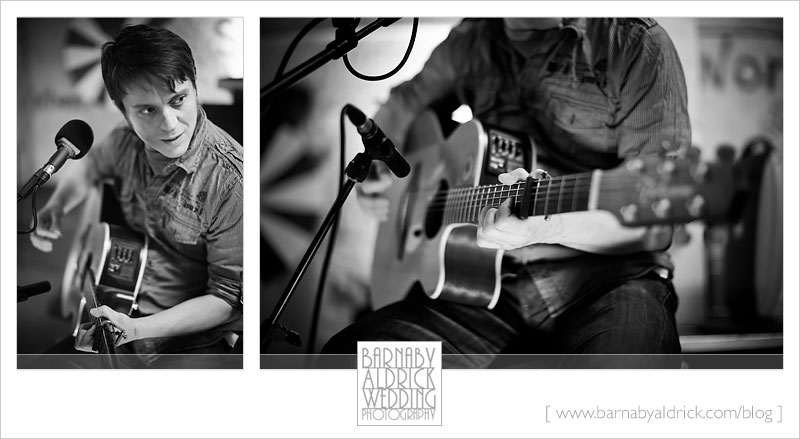 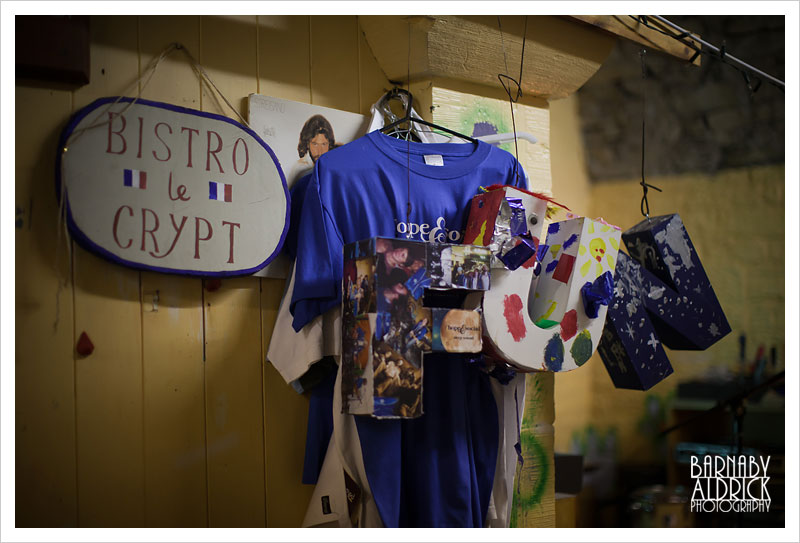 I spotted the ‘Bistro Le Crypt’ sign (holding a Barry Gibb & Barbara Streisand LP to the wall), and back flooded the first documentary myself and my 3B Media buddies shot on our Canon 5Ds.  It’s still a beaming example of how H&S turn silly ideas into ludicrously entertaining events.

Check our the behind the scenes doco here. 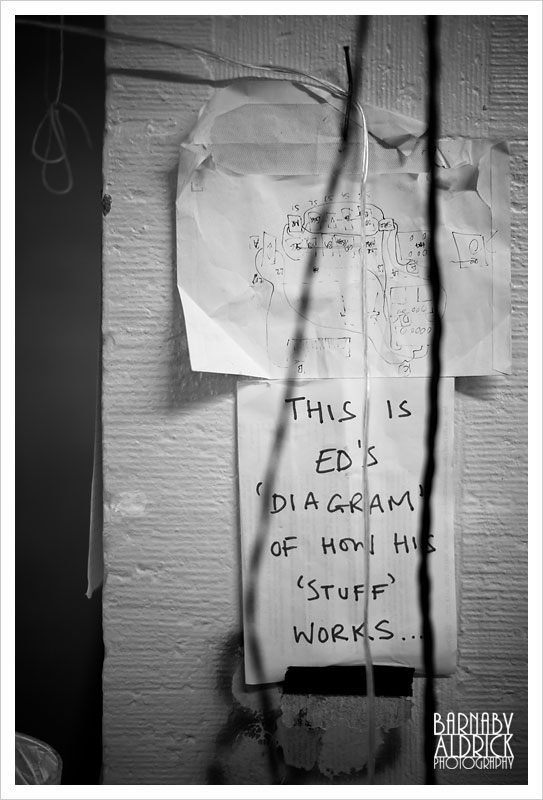 But back to a few highlights from around the Crypt, I liked this little Diagram of how Ed’s recording equipment works! 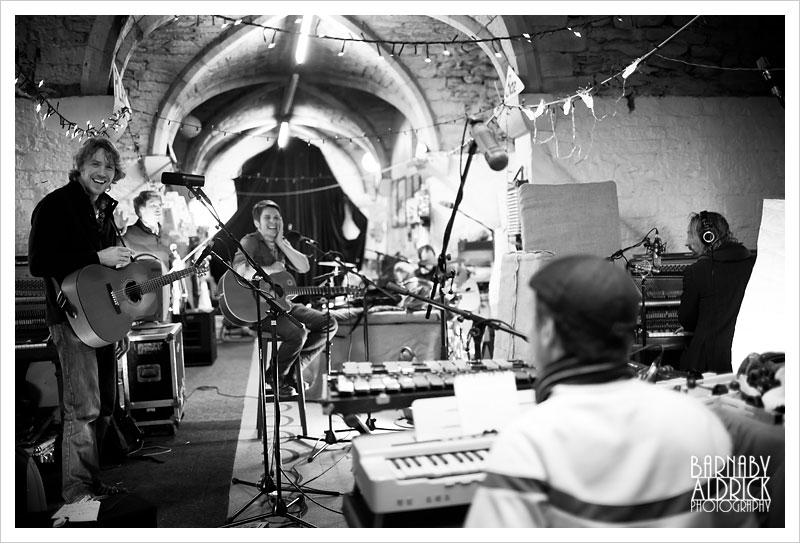 I like this one of the guys sharing a laugh 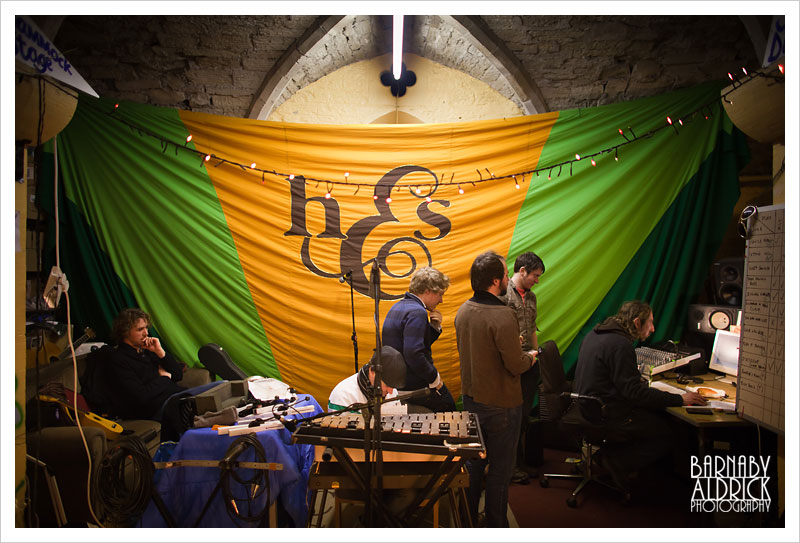 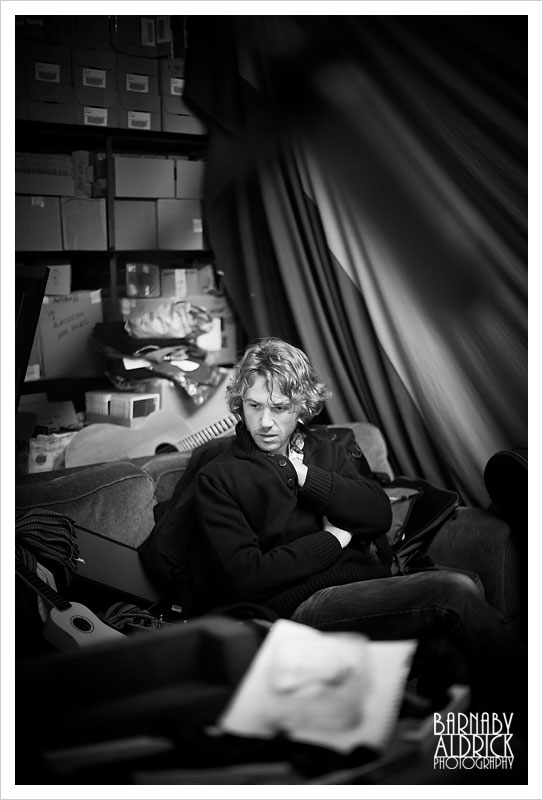 I like this one of singer Simon soaking it in 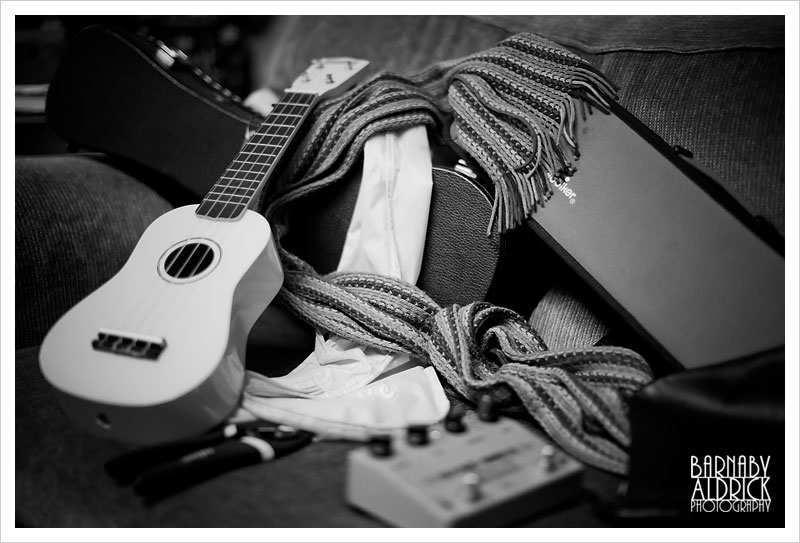 And next to him on the sofa, a uke takes a rest. 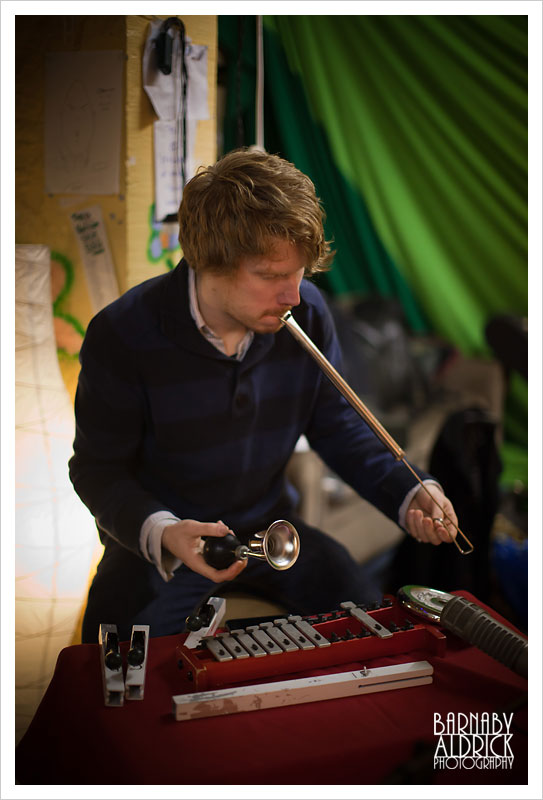 Much of the new mashups feature all sorts of fun instrumentage 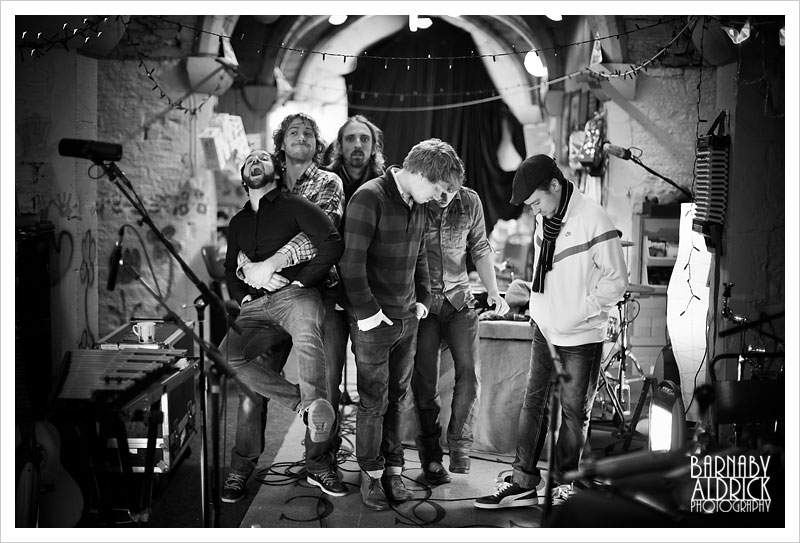 As they’d somehow not had any official band shots since their old basist left, I offered to do a few squad shots 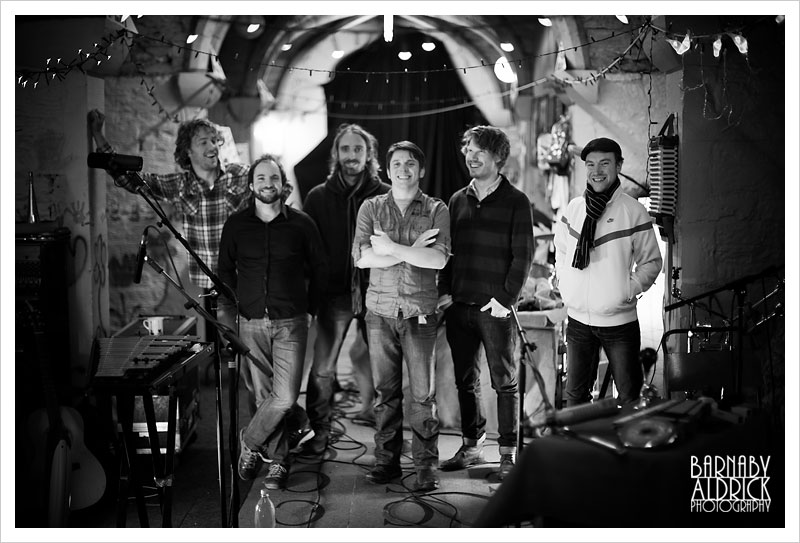 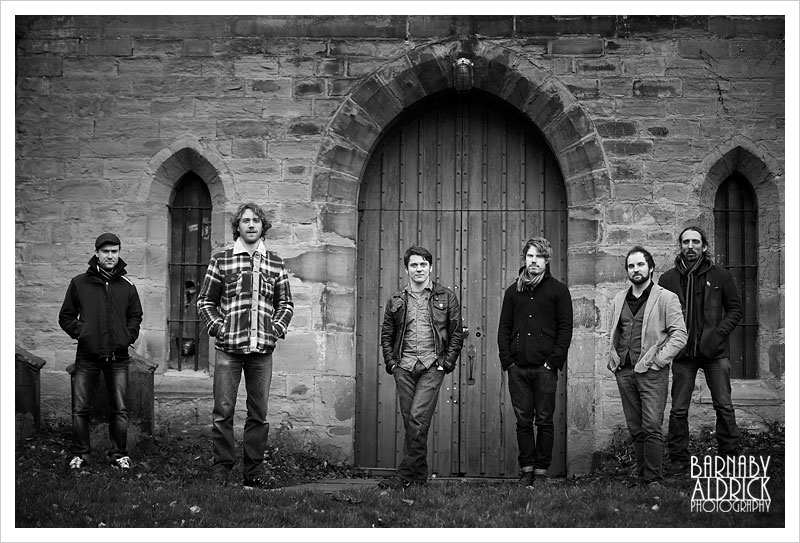 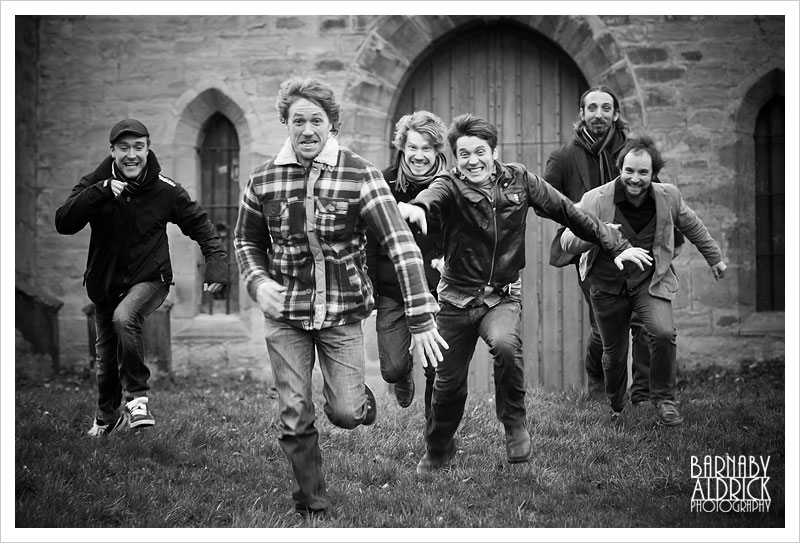 Didn’t take long to have them messing around though.  I didn’t even ask them to charge. 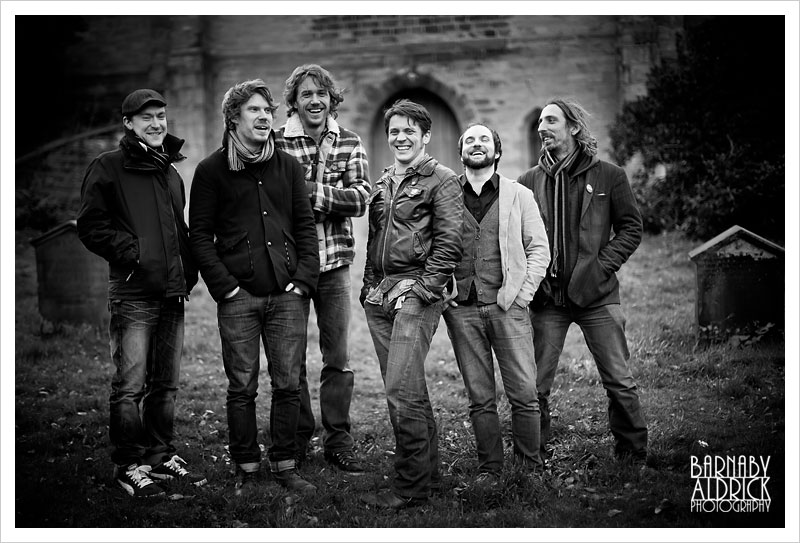 But to be honest, the look I wanted from them was them laughing and having fun.

Bands so often want to be portrayed as ‘cool’, and end up awkwardly coming across as bored / depressed 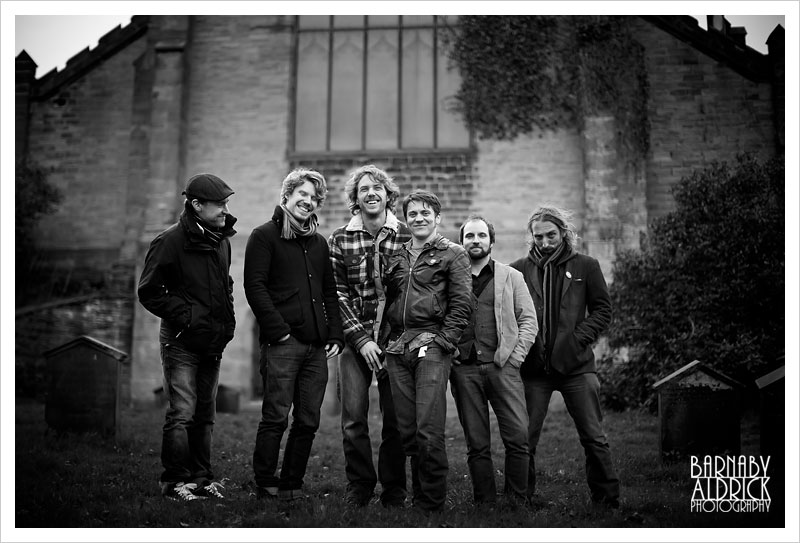 H&S are anything but depressed, so it was again good that we all know each other, and I just leave them to talk crap amongst themselves 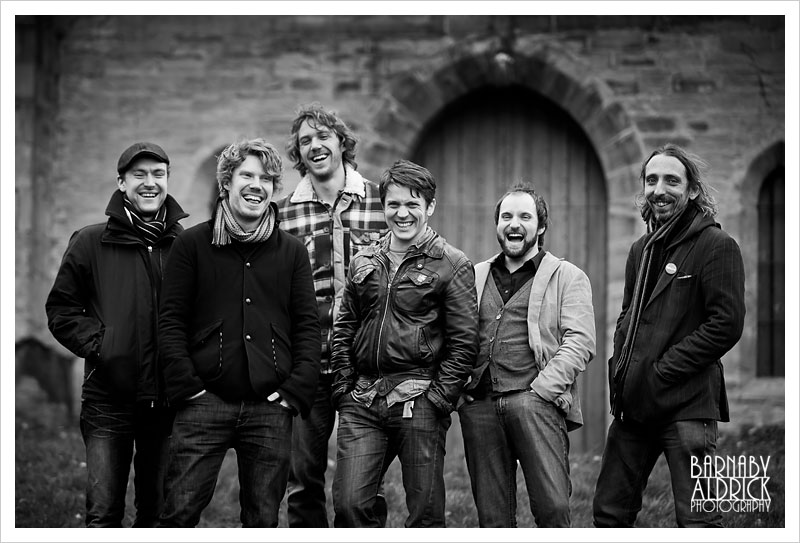 I think this was my fave one of the lot to be honest.

So – that was the day before the night, bus as this has already got a bit epic (good work getting this far!) I’ll post a separate stash of evening images in a later Big Red Button post!

Stay tuned amigos, and thanks as always for listening.

[Be sure to check out H&S’s music here – I think lots of it is still available on a ‘pay what you like’ pricetag!]