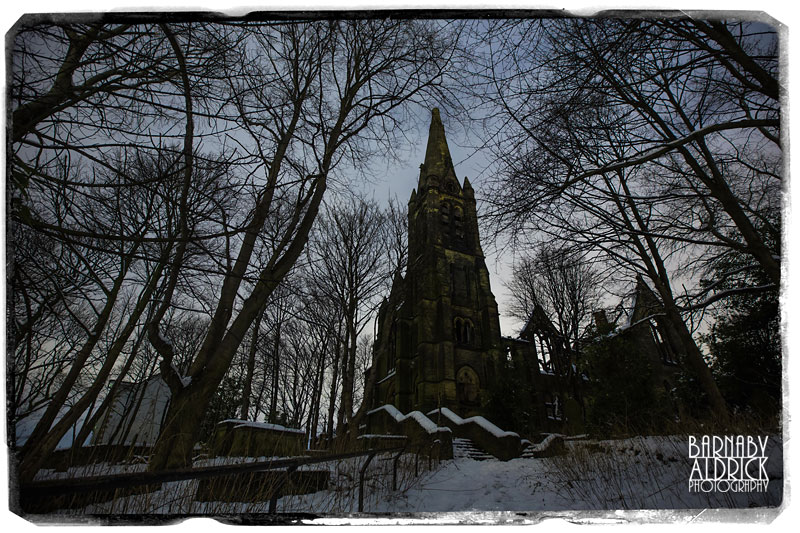 Last week a buddy and I decided to head into the snow to explore the ‘Grand Old Lady of Morley’, St Mary-In-the-Woods.

It’s a Grade II listed church with over 1000 years of charted history in the Parish of Morley (not only is it the oldest documented site in Morley but it’s also mentioned in the Doomsday Book!).  Some of the graves in the churchyard date as far back as 1699 and the Church tower housed the Pancake Bell which originally came from Kirkstall Abbey in Leeds.

Sadly, due to dwindling congregation and being unable to fund the upkeep of the Church, it was closed its doors in 2007 and was sold to an entrepreneur a former Leeds Magistrate.  In 2010, planning permission was applied for to turn it into a restaurant / luxury hotel, and later that same year, in the early hours of the 12th June, there was a devastating fire that gutted the church. 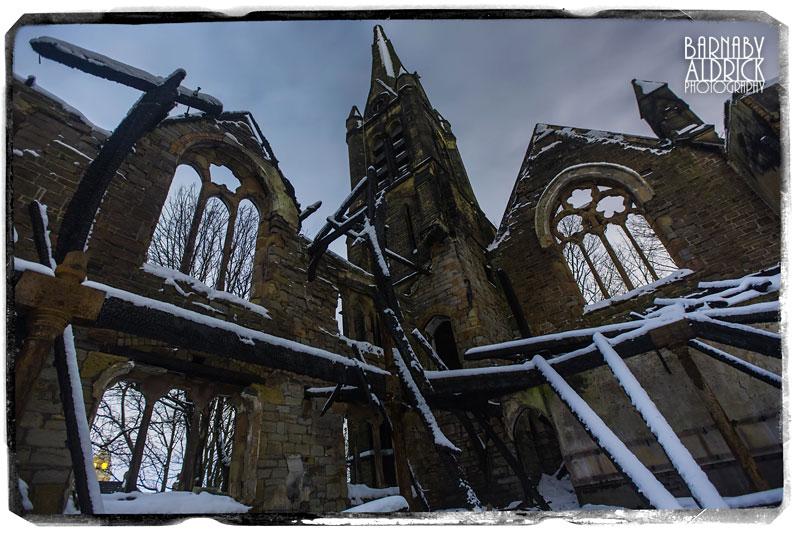 No conclusion has been made by the Fire Service as to how this started and no one has been arrested, and today the place stands as a derelict shell. 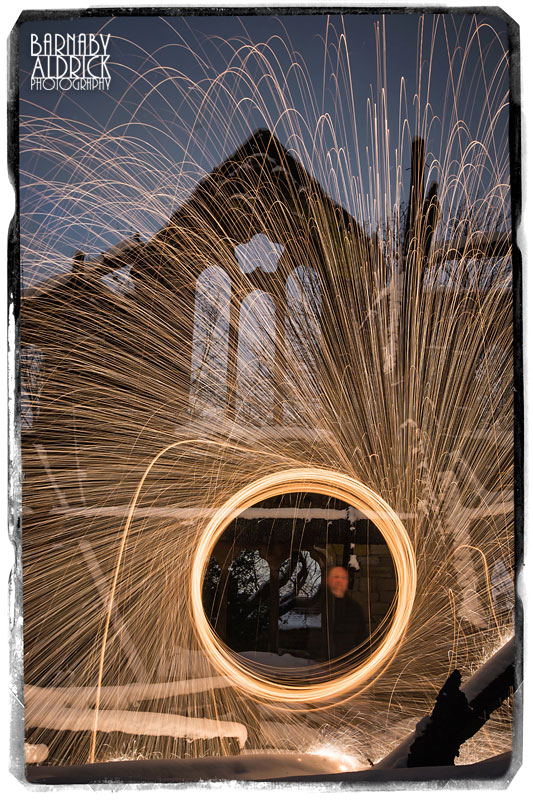 So we decided to go and play with fire there!

[but seriously folks, we were super careful] 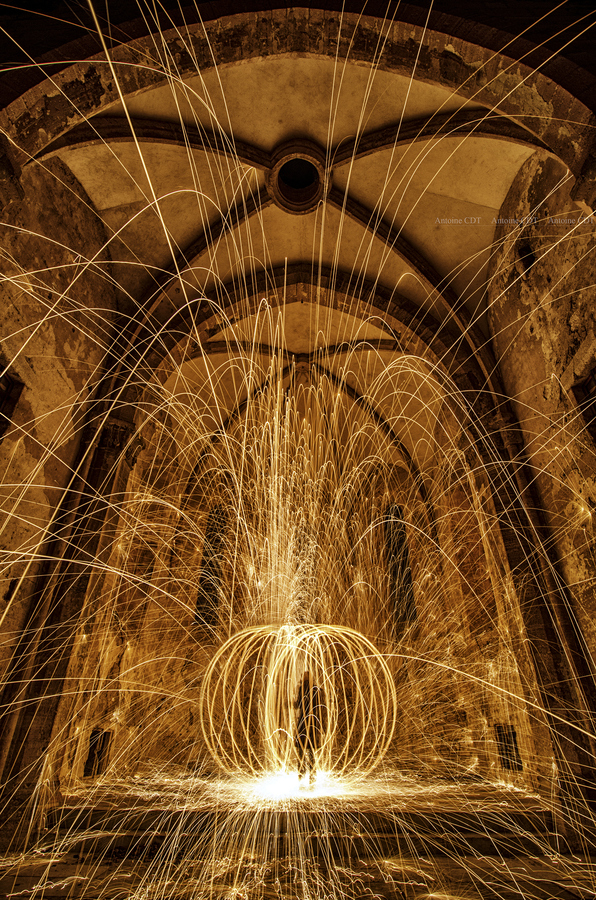 I’d recently seen this brilliant image on 500px website (here) called ‘Church of Fire’ by Antoine Cibert, and it got me wondering how it was done. 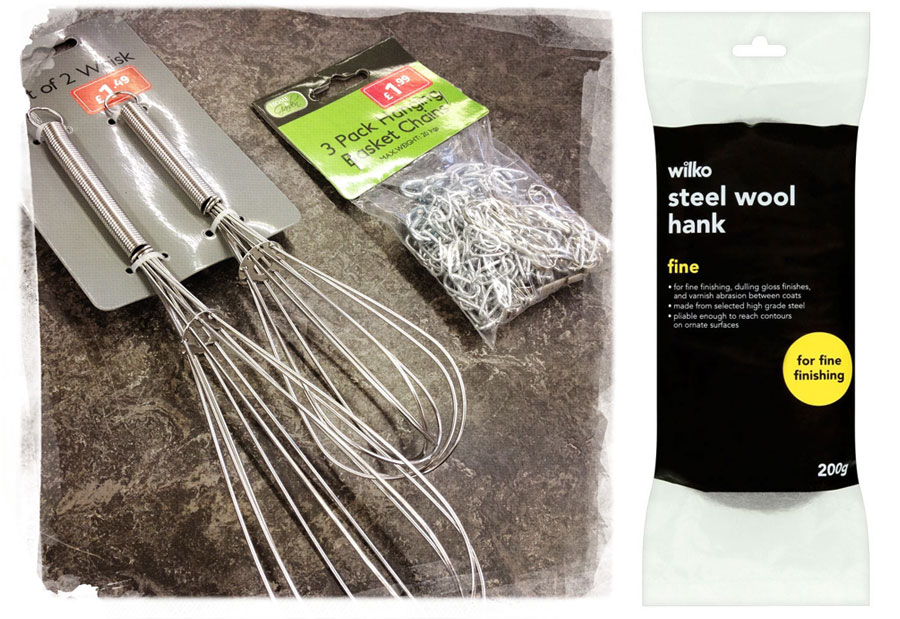 A bit of research told me it’s done by setting fire to thin, decorators wire wool, balled up in a wire wisk on a chain.  So off I went and bought some… 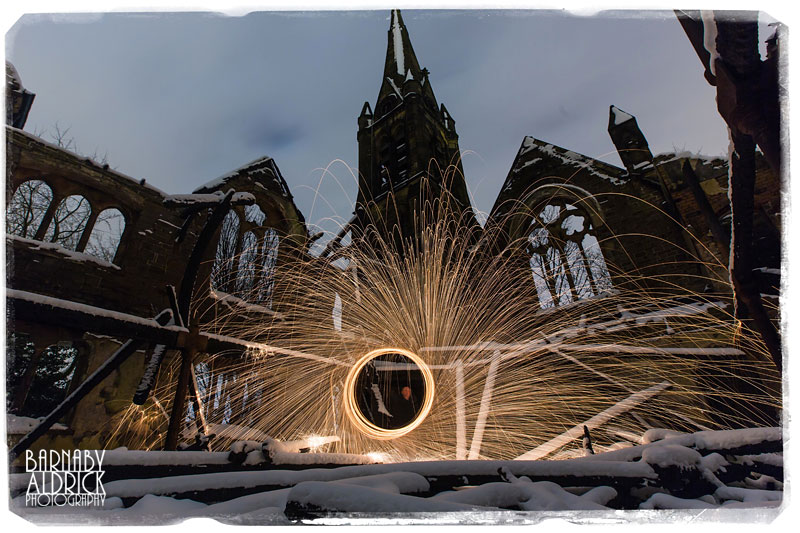 …and with an UrbEx buddy (& all round excellent photographer) Joe Stenson, we started to play!  Joe’s created some brilliant images with wire wool in all kinds of mad places, like deep in underground sewers etc. and the results are ace eh? 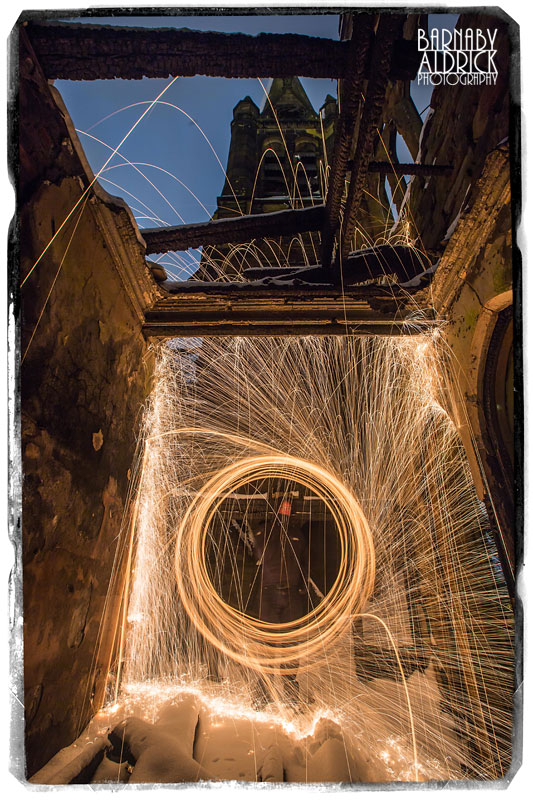 Essentially, the way it’s done is to pack the wool into a metal wisk, hang it on a chain & once lit, spin it like fury during a long exposure.

Of course, you need your camera on a tripod, and as a guide have it set on a manual 20 second exposure at f8 at ISO 100, do a test exposure to check the ambient light (adjusting as necessary).  Then we found setting the timer for a 2 second delay was best, as once the wool is lit (which can be lit with a lighter, or bizarrely by stroking with a 9V square battery) and sparks start to fly, hit the shutter, and 2 seconds later the exposure starts (ie. no camera shake setting it going).

It helps if the person spinning is wearing black with a hood up, or they’ll expose in the shot (like the two above).  It also helps to use fine grade wire wool (more flammable than the corse) & to stretch it out before packing it into the wisk, so air can get through it.

When captured correctly, the burning wool spark trails rising and falling, bouncing off surfaces and landing in the snow looks insane. 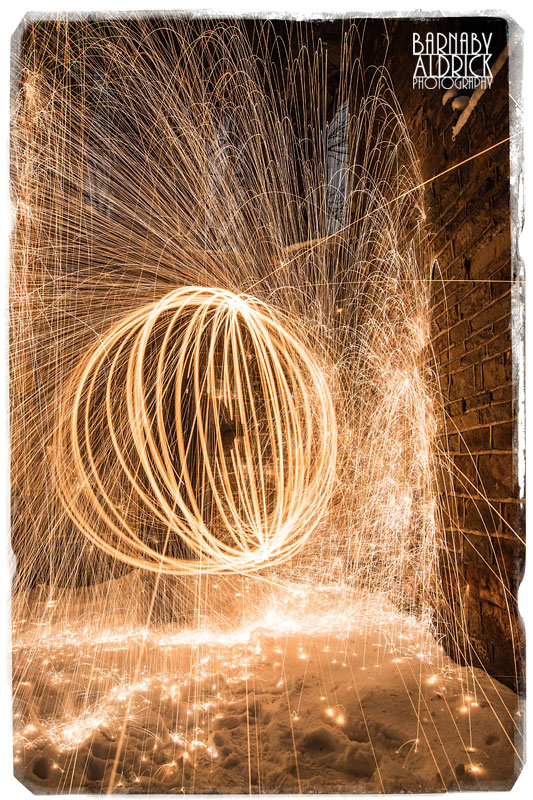 I had a go at doing an ‘orb’, where you spin a circle and slowly rotate around a point.

I also selected an enclosed spot, so sparks would bounce off nearby walls (inspired again by that church of fire pic, where sparks were bouncing down steps). 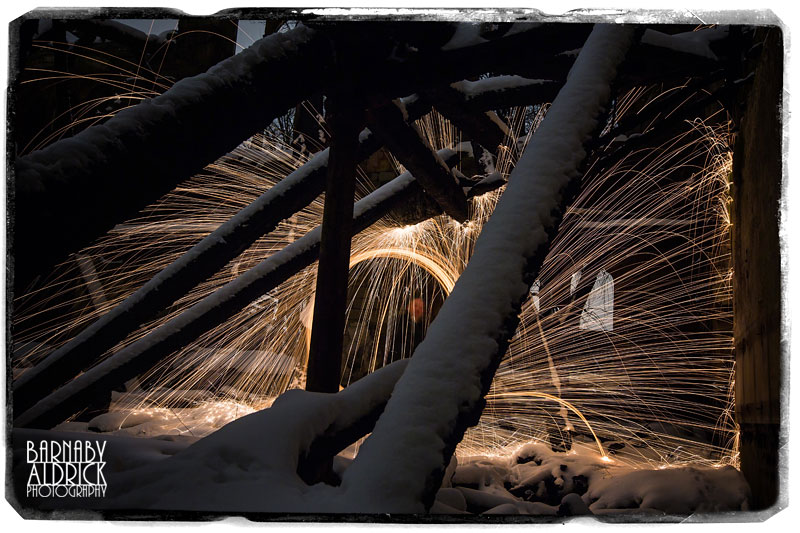 One final effort I liked was mixing it up a bit and shoot from behind some of The Grand Old Lady’s fallen snow covered broken limbs.

As it was baltic, we didn’t stay out that long, but it was brilliant fun, and I’ve got a stack of wool left for further adventures, so watch this space!

WARNING: if you do give this a pop yourself (and do, because it’s great fun!) be aware that you’re playing with fire and to check nothing catches alight after you’re done. Check after you’re done than nothing’s smouldering or aflame, as the little sparks burn hot.  We chose a snowy scene as the ground couldn’t set alight, and other ace places such as on beaches or over still water are safe and creative places to experiment.  Be safe, have fun!