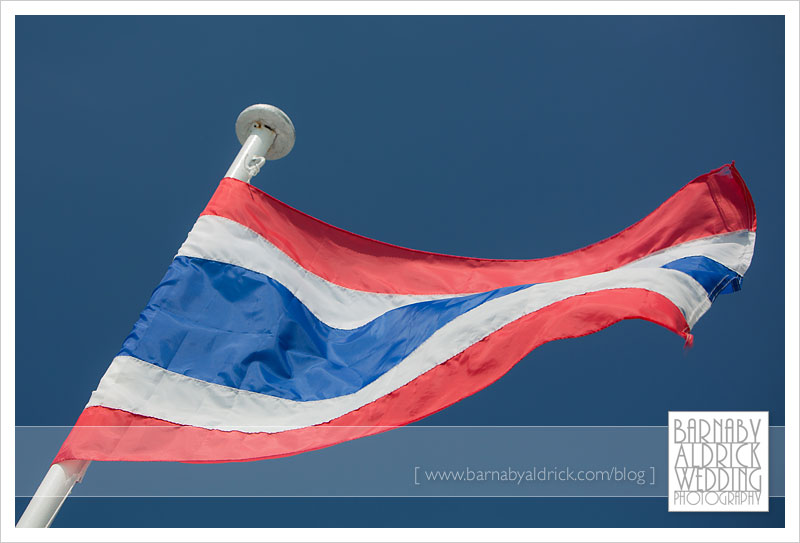 At the start of January I was lucky enough to be flown out to Thailand to photograph a wedding! 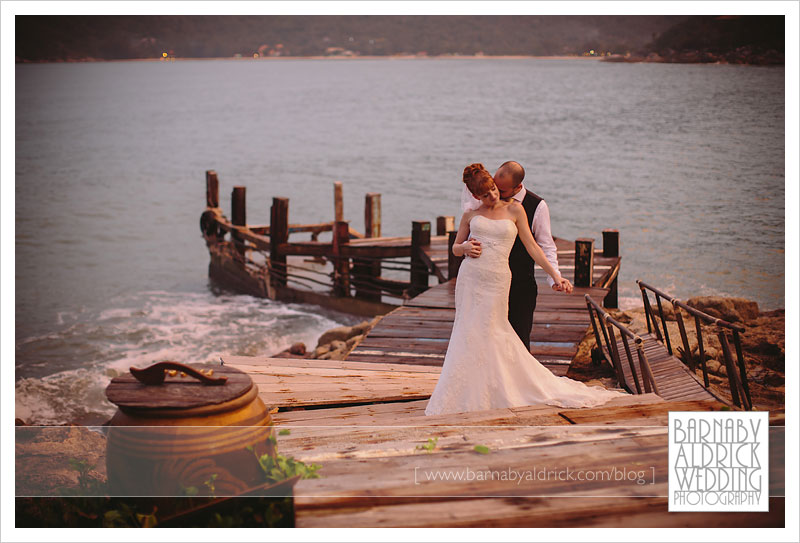 It was to photograph the wedding of these awesome kids, Donna & Dan, who married on a remote corner of Koh Phangan island!

As I was out for 8 days in today and it was more than just a wedding day, I’ve been in a few minds about how to blog this.  As well as photographing their simply brilliant wedding, I was invited along on the hen do, hung out & shared some special moments with the family as folk arrived, went out partying with the bride & groom & their buddies all over the island, shot an exotic pre-wedding shoot, and went out on a boat trip with the bride & groom on my last day there.

It really was more of a wedding experience than just a days wedding photography and I had a blast.

So I’ve decided to split it into 4 posts: The Hen Do, The Pre-wed, The Wedding and The Boat Trip.

I hope you enjoy this story of a very special day! 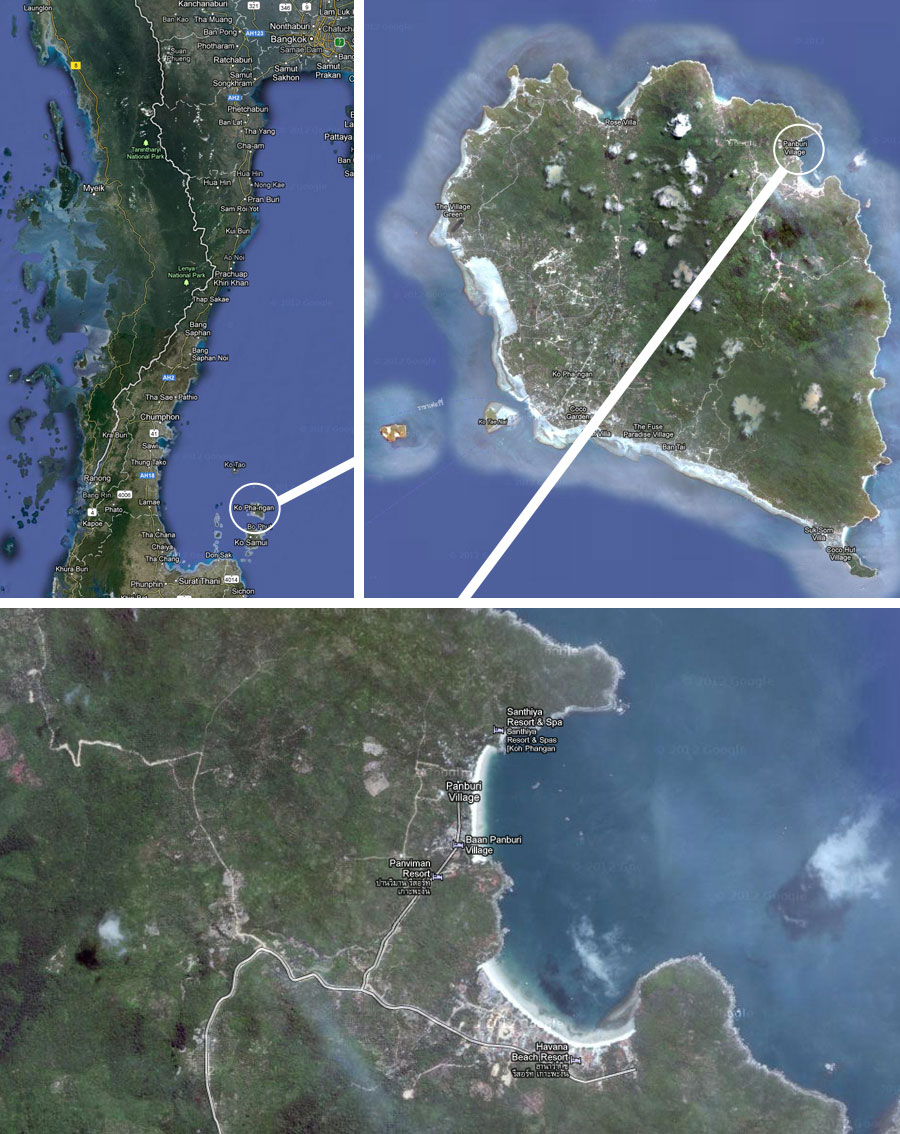 Koh Phangan is in the gulf of Thailand, south of Bangkok, and the wedding was at the top of Thong Nai Pan Beach to the North East of the island.

I’ve been to Thailand 4 times now and adore the place.  It’s been handling tourists for 30 years and the gracious, accommodating Thais, amazing food and exotic vistas really make it so special.  Whenever I’ve been in this neck of the world before, I always headed back to smallest island on this chain, Koh Tao for a chill and a snorkle.  It was great on this adventure to check out Koh Phangan a bit more.  As I disembarked the plane on the neighbouring island of Koh Samui I was struck by that wonderfully familiar barrage of heat, smells and island life bustle.  One sniff it’s grilling meat, foreign spices & sea air, the next it’s a choking cloud of 2 stroke smoke and an overheating sewer.  Magic. 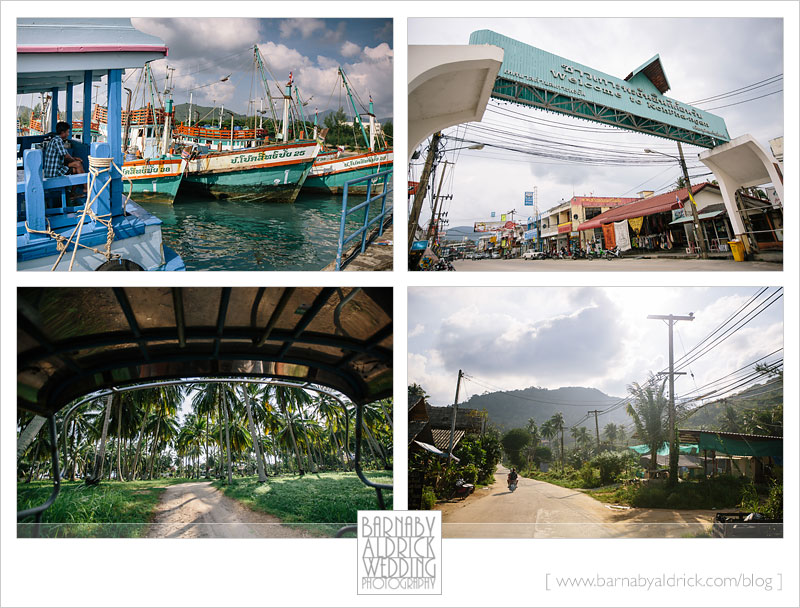 I was surprised by how big Koh Phangan was, and the journey from the port to my resort near Donna & Dan’s wedding was a bit of a mission! 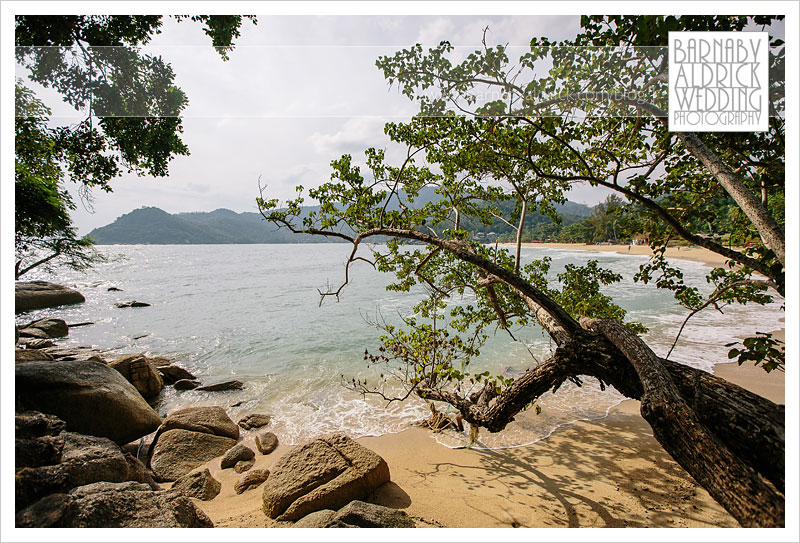 But this was my pretty much deserted beach!  Can’t complain eh? 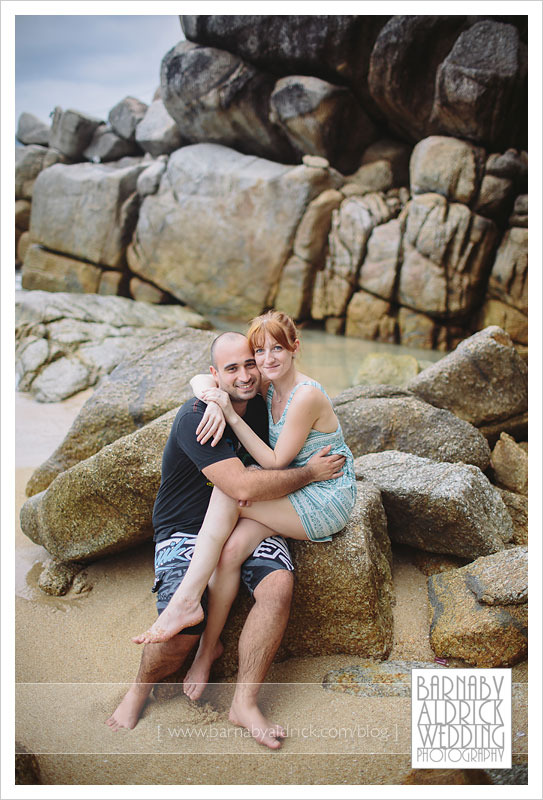 The story behind Donna & Dan’s Thai wedding is great.

Basically, Dan’s from Australia & Donna’s from England. They met in Aus, fell in love & travelled the world extensively together, finally settling back in Leeds Leeds Leeds!  They’d always intended on having a New Years party in Thailand, for their trans-national buddies.  Then one of their mates suggested as a bit of a joke that as everyone’s gonna be there anyway, they might as well get married while they’re there!

Donna, being both a lady of incredible taste (!) and a victim of my Facebook photo spamming, said she’s always loved my wedding pictures, and in spite of having a Thai photographer included in her wedding package, wanted to fly me to document her wedding.

Needless to say, I didn’t take a great deal of convincing! 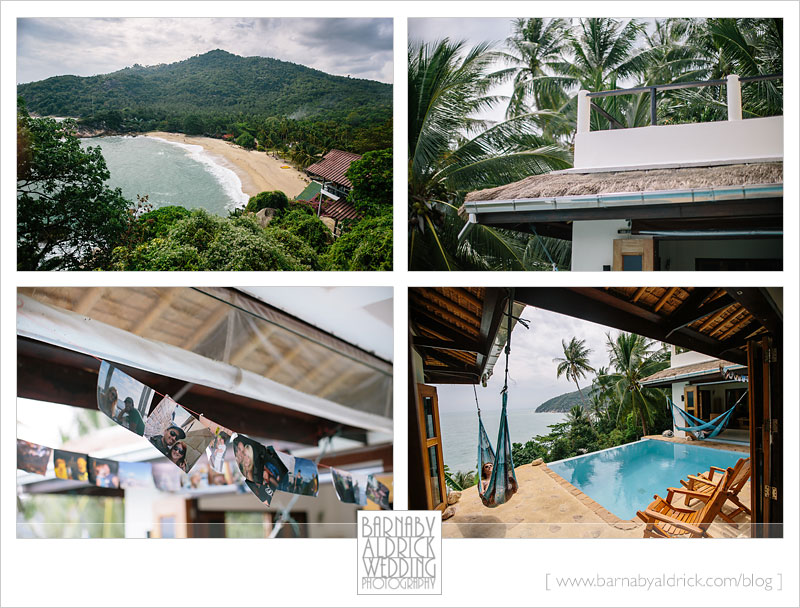 After unpacking, settling in & setting up a secure BAWP HQ, I headed over to find the gang at the awesome villa they’d been in since before New Year. 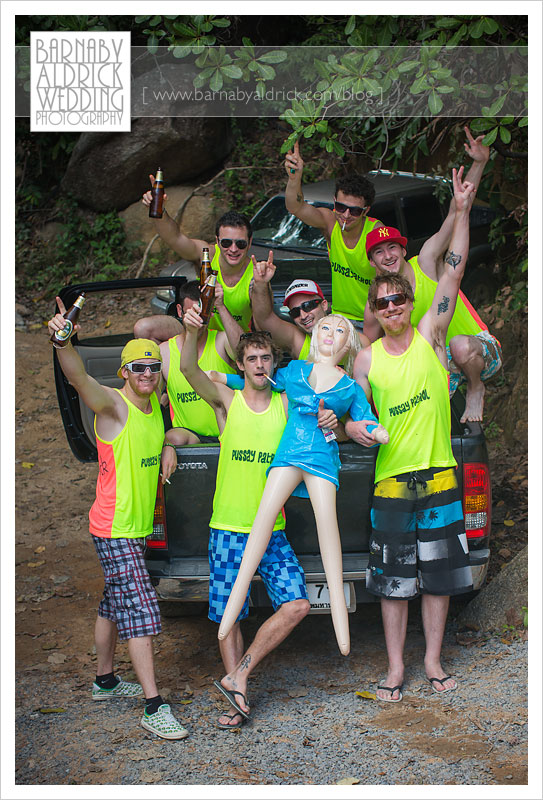 I arrived literally as the ‘Pussay Patrol’ were heading out on their ‘bucks’ party. 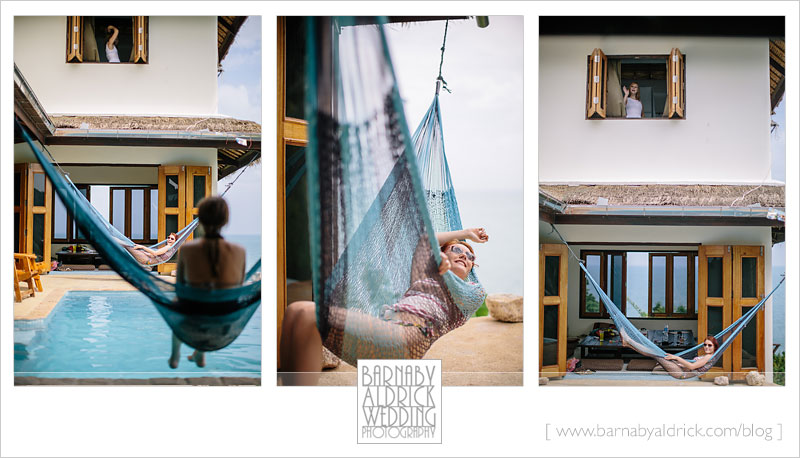 Stag do’s aren’t really a place for a photographer (so things are better left un-documented!), so I chilled with the girls. 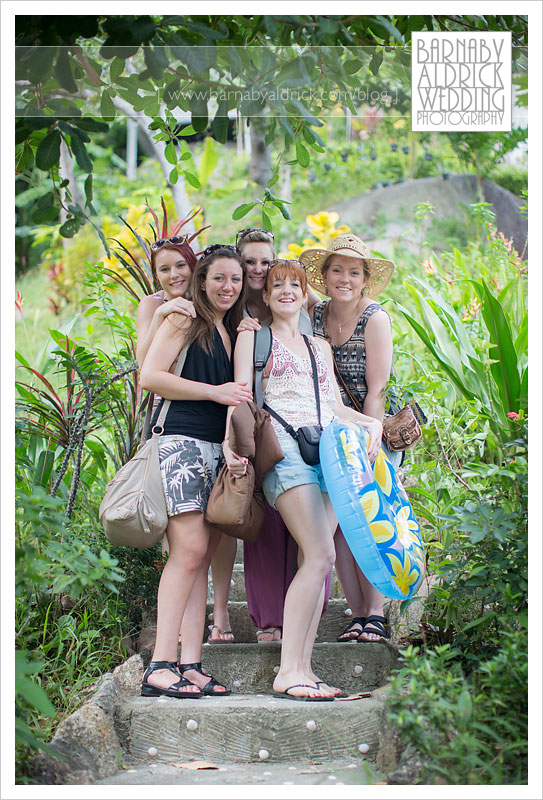 And once our lovely bride-to-be raised her sleepy head… 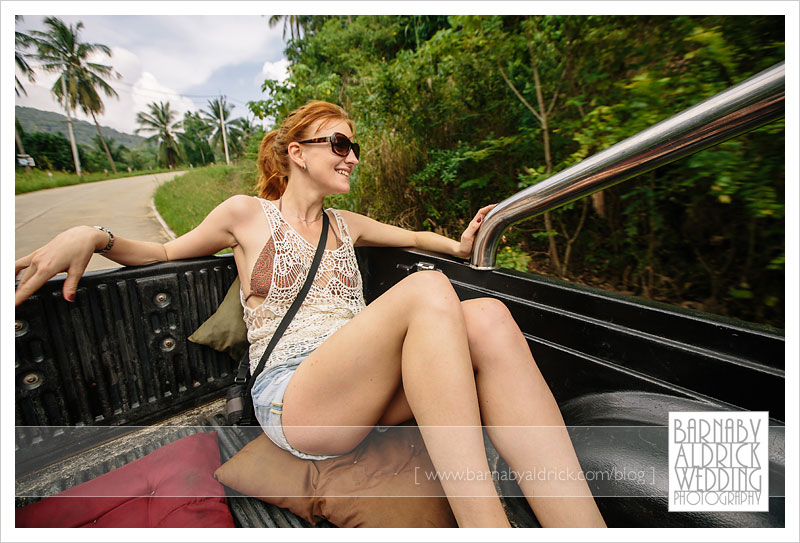 …we dived in the truck & headed out for a day’s fun! 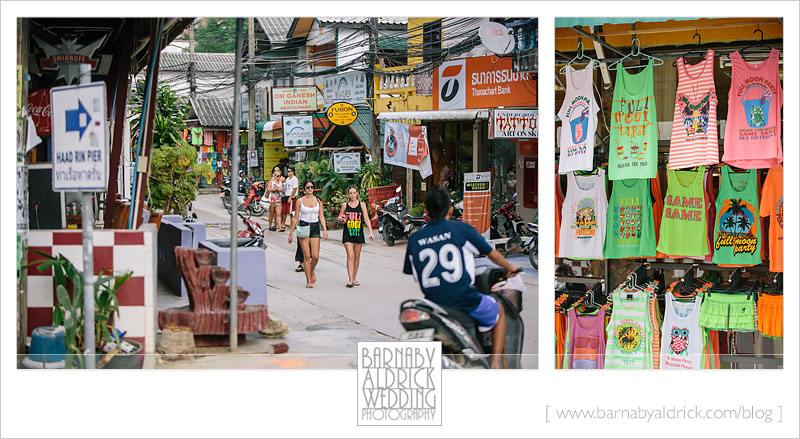 Down at the pier, as we waited for a few new members of the gang to join us, we saw the neon singlets associated with Koh Phangan’s famous Full Moon Party! 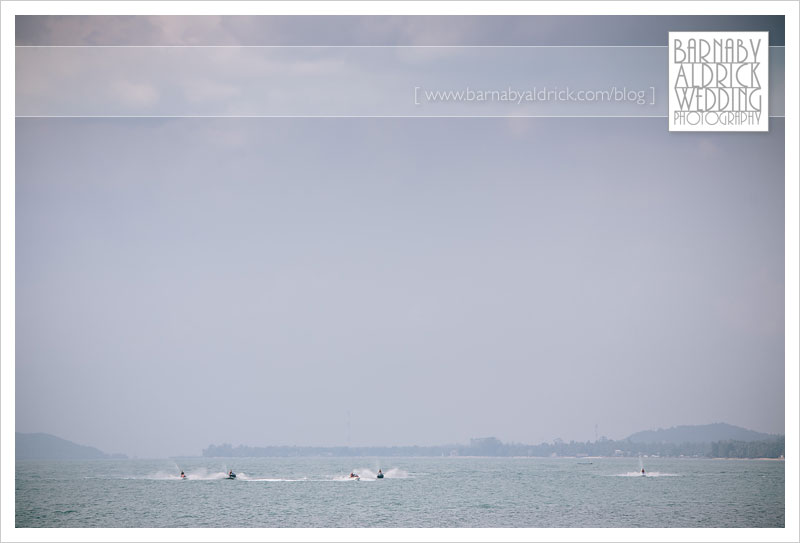 We even caught the bucks on the horizon getting their jet-skis on! 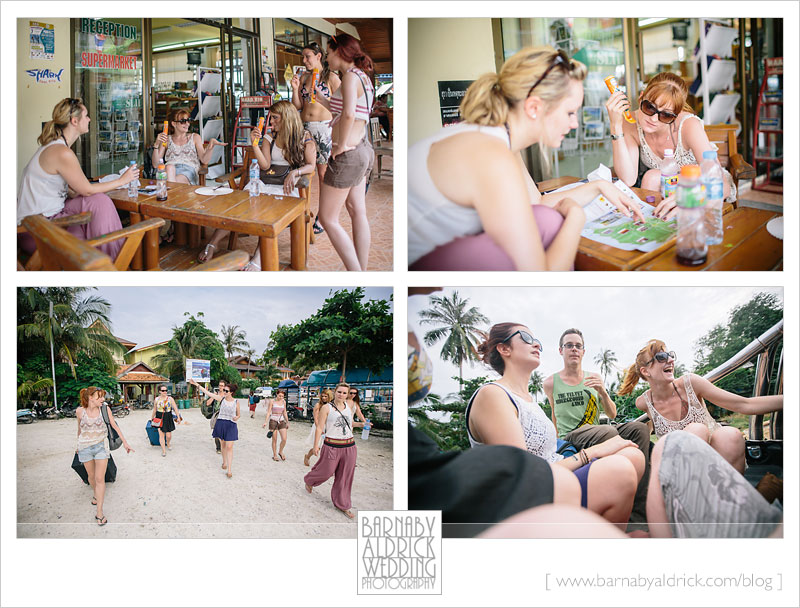 Once team Hen was fully assembled, we headed inland… 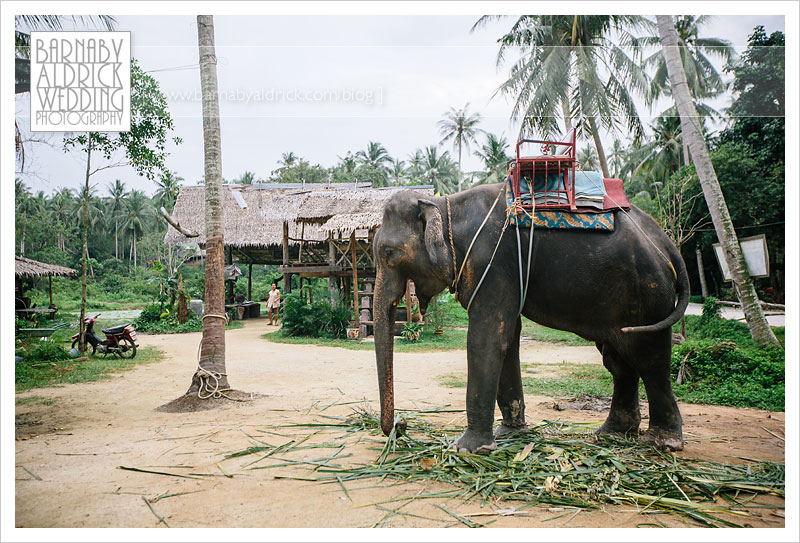 …for a spot of elephant trekking! 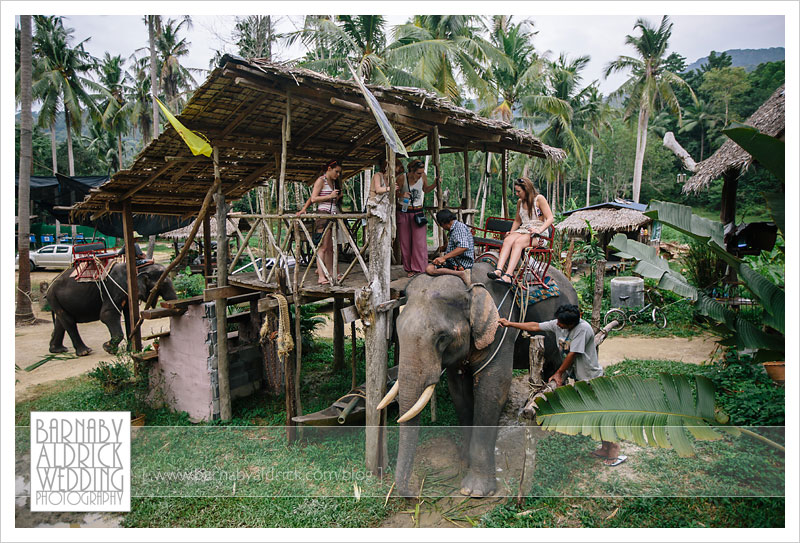 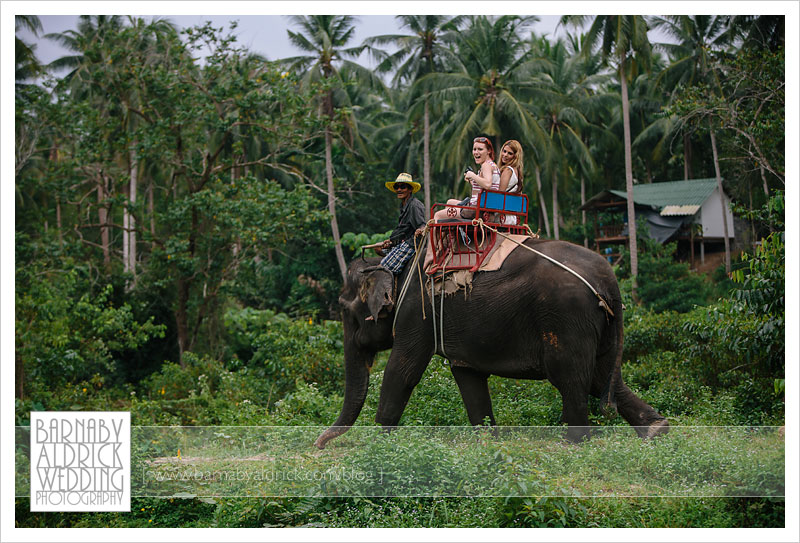 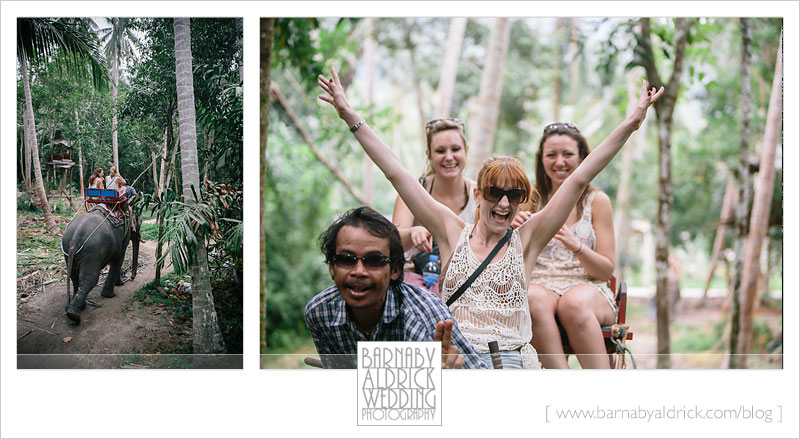 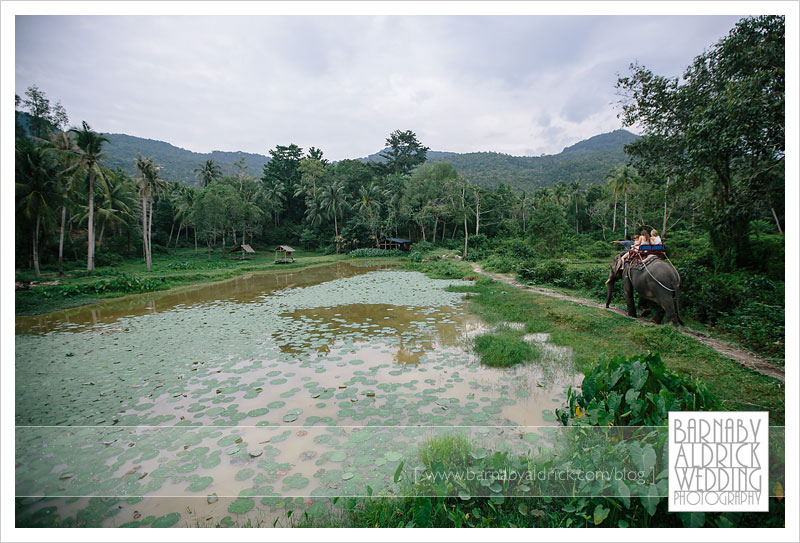 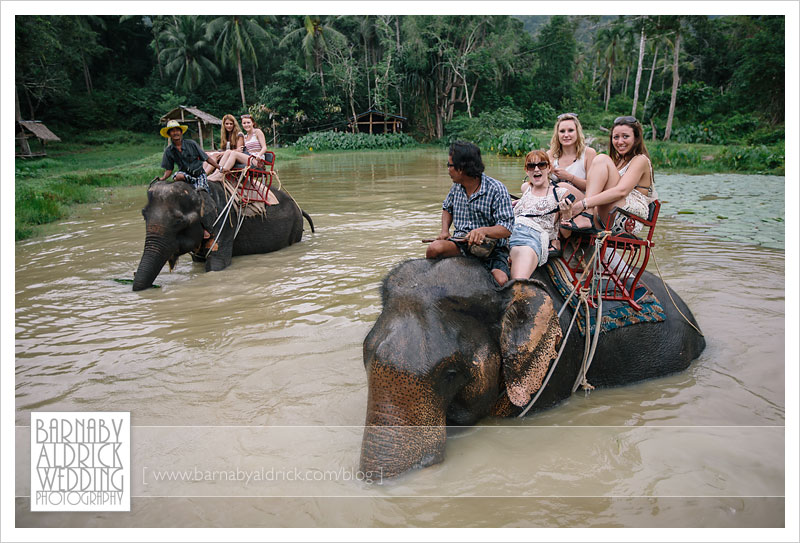 We even took a dip with the elephants! 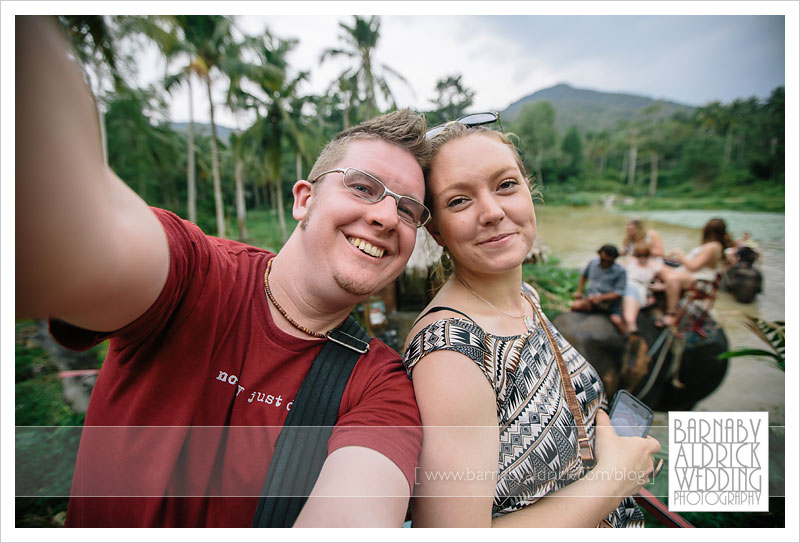 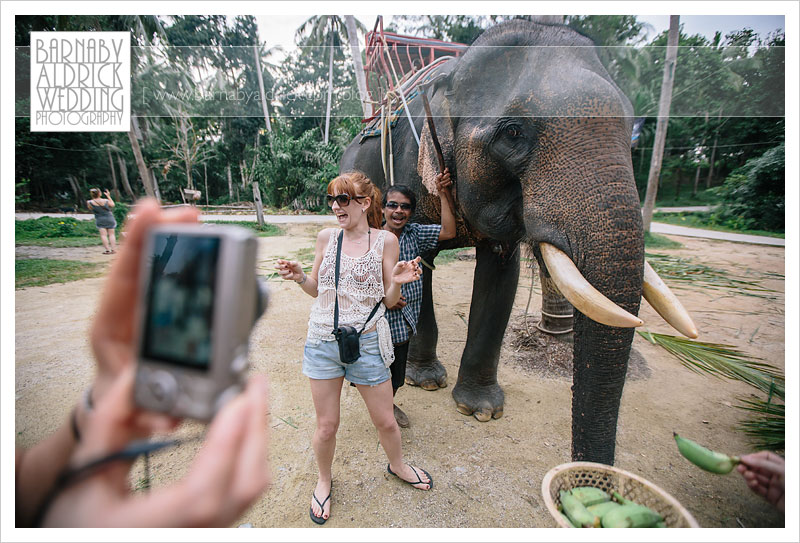 Afterwards we gave these incredible creatures a cheeky snack, which one literally has to place on it’s Entertainingly rank tongue! 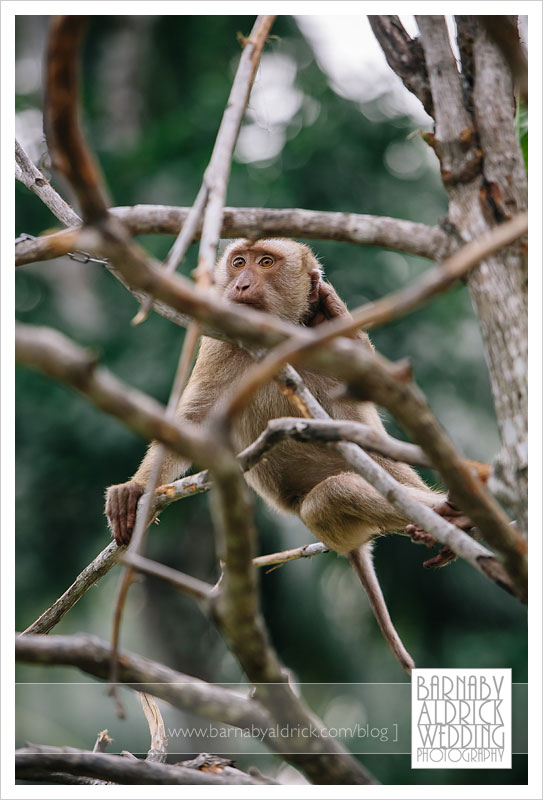 I spied this beautiful, if angry, little monkey up in a tree. 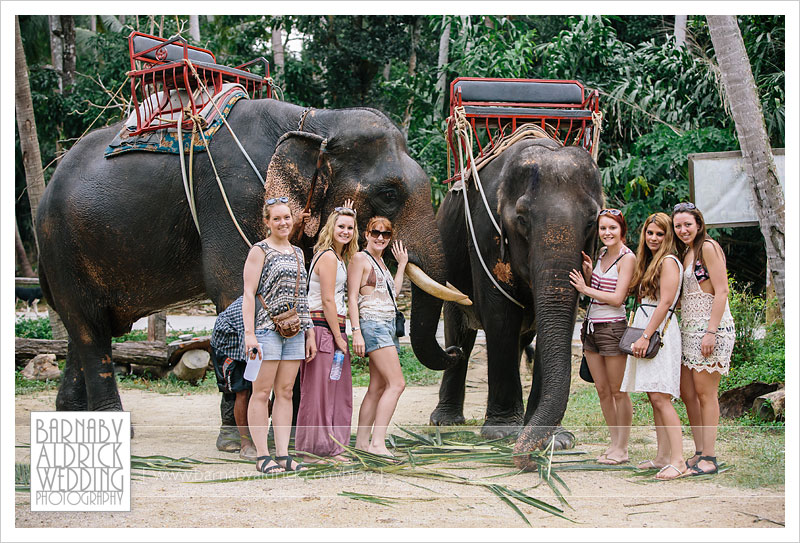 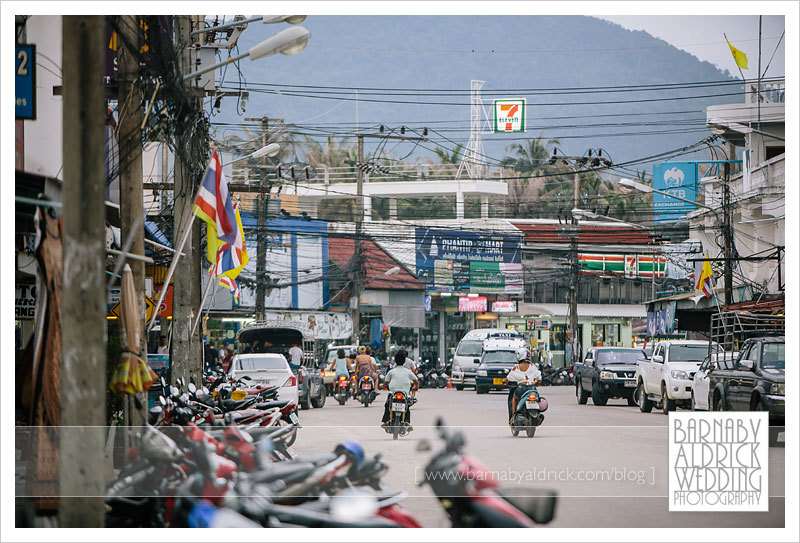 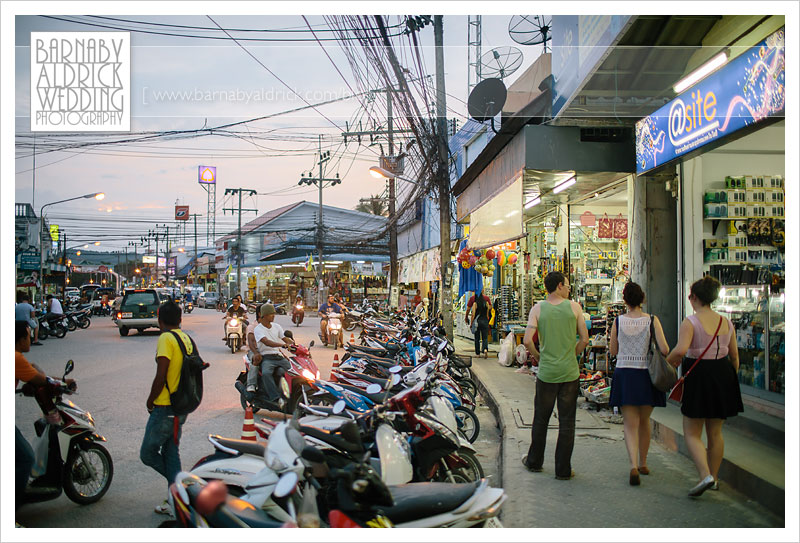 This is so Thailand to me.

Traffic everywhere, scooters over-loaded with produce/kids/monks (or a combination of the three), backpackers buying cheap Chang from the 7Eleven, bustling markets, sketchy overhead cables & the sun setting quietly in the distance. 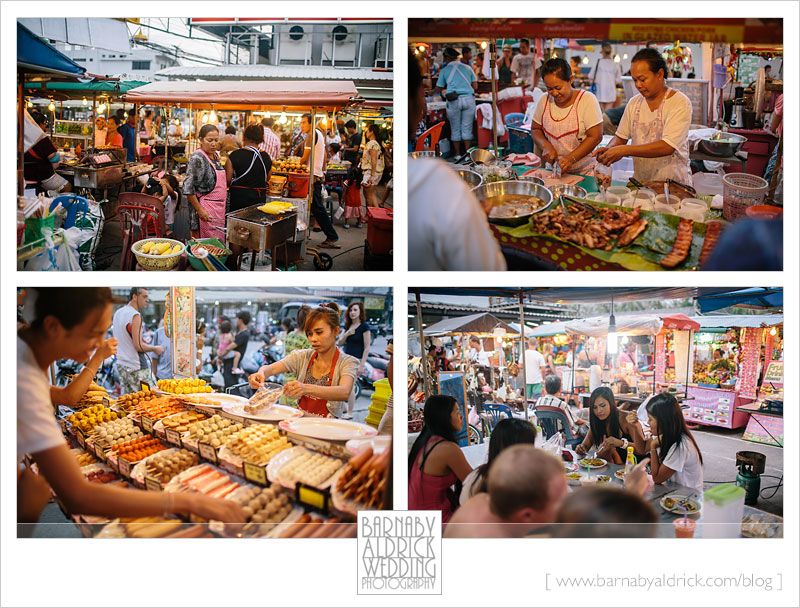 We grabbed a spot of dinner in the local food market.  It’s sometimes a bit russian roulette, but generally everything’s safe as it’s cooked fresh in front of you.

Pretty much anything that can be fried gets a go here; and the chicken, ambiguous meat balls, corn, ribs & fish taste ace. 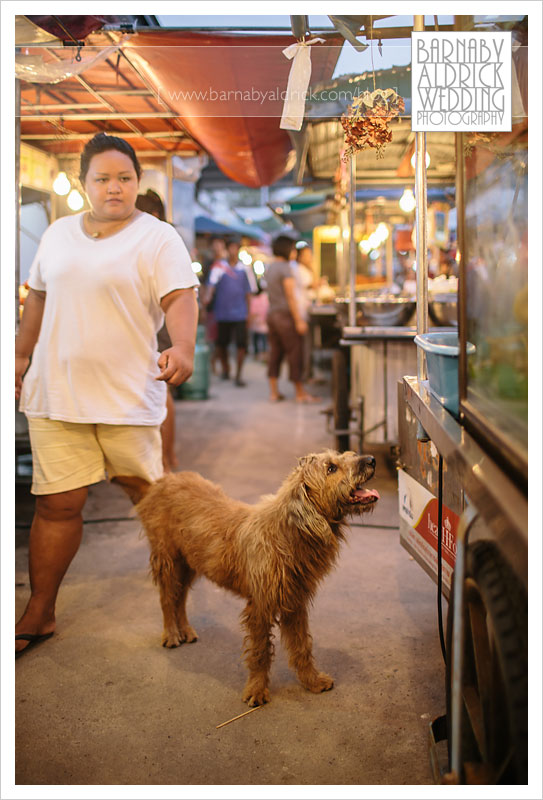 This guy particularly thought so! 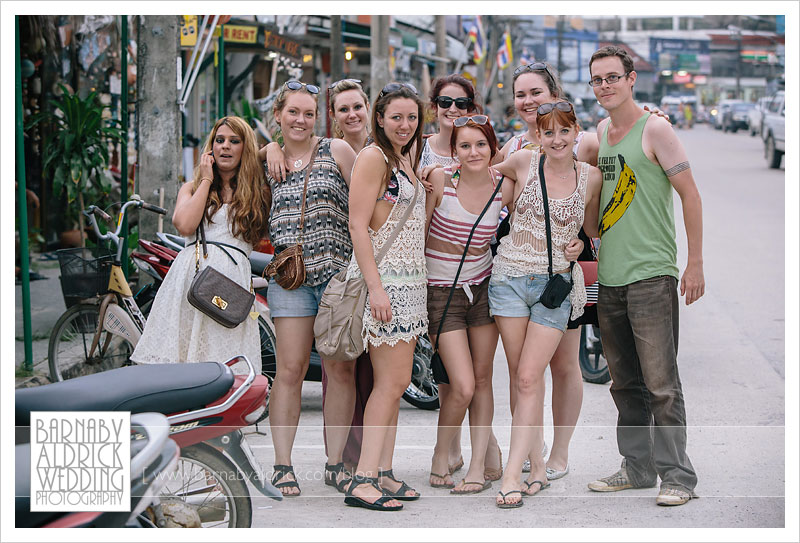 Stay tuned for more over the next week!