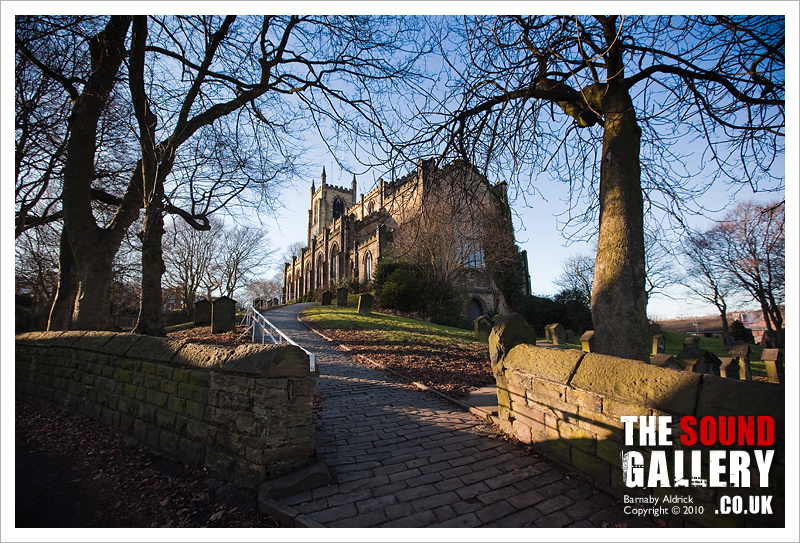 Last week Phil Barber, Rob Booker & I joined our pals Hope & Social at the Crypt where they’re in the process of recording their second album.

They’ve done various creative gigs and events at the Crypt before and for some reason had a feeling it was in a romantic hamlet on the edge of the Yorkshire Dales.  It turns out it’s nestled in the urban sprawl in Liversage, on the way out to Bradford.  But the church itself is a beautiful old thing, and for a good few years, Hope & Social have hired the underground ‘crypt’ and converted it into their studio. 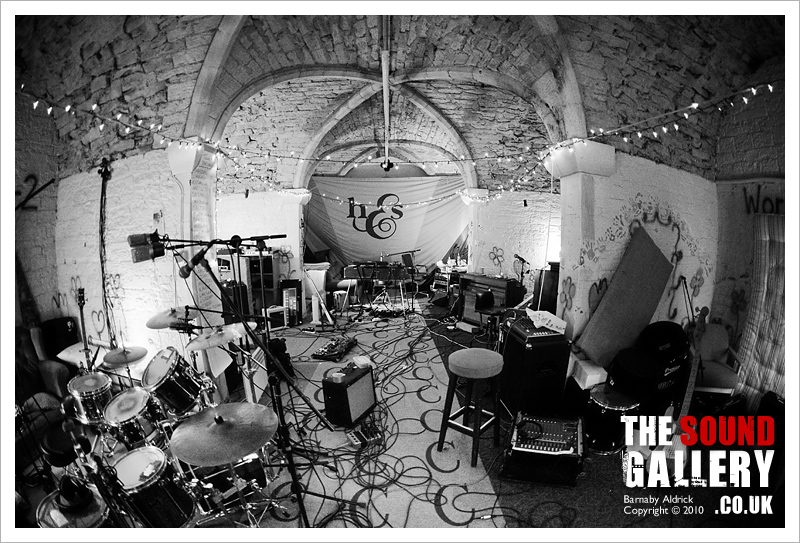 The lead singer Simon and his wife are about to have a baby, so they’ve decided to write, jam out & record an album in a month before she drops.

It’s an unusual way to do it and it was ace to hear the song they were working on take shape over a few live takes. 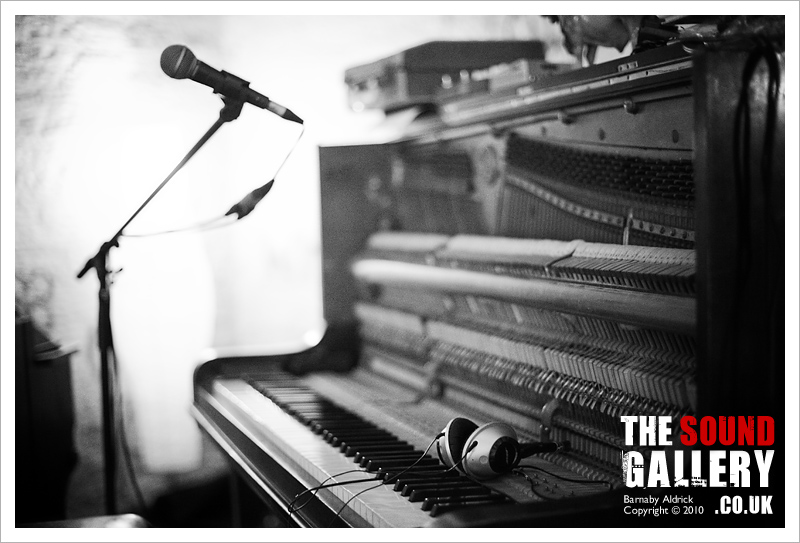 We chatted with them and their promotions / social media man Ben Denison (@bendenison) about various exciting future projects they had in mind. 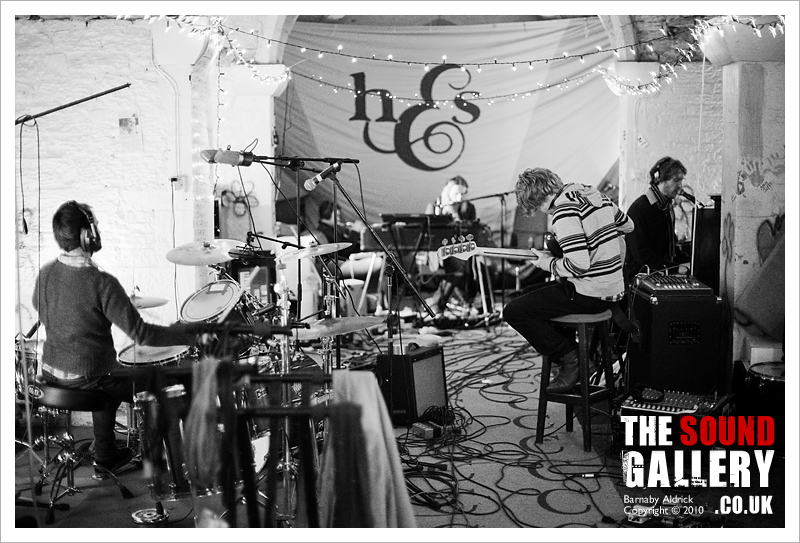 They have a great philosophy in their approach and are all about getting their fanbase involved as much as possible. They’re brewing ideas to get fans down to dine at the crypt while they play, are toying with inviting other bands in to record a cover track in a day (nominated by their twitter follwers), and are currently asking fans to twitter them names of towns which they are then going to work into the lyrics of one of  their new songs “Marching on through” Check their twitter if you want in – #hopeandsocial #crowdsourcing 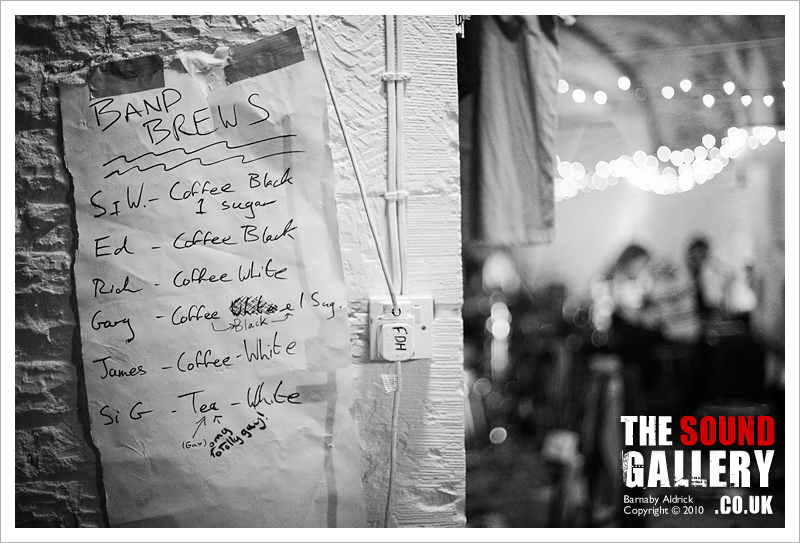 Talking of brewing, I liked this sign by the kettle… 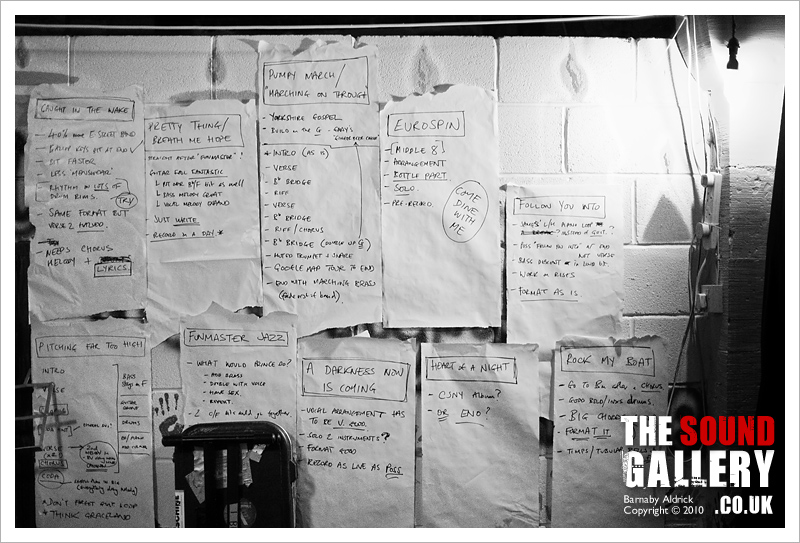 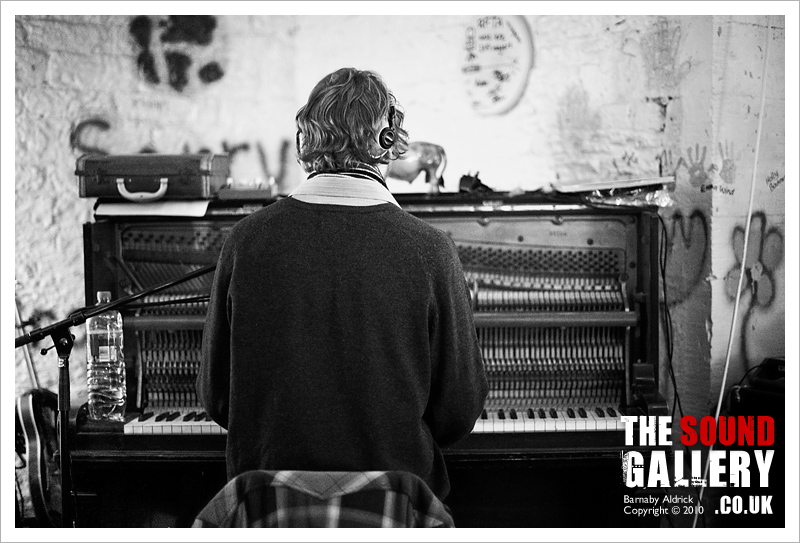 It’s pretty sweet being able to document an established band in the middle of their creative process. They’re all such consummate musicians. 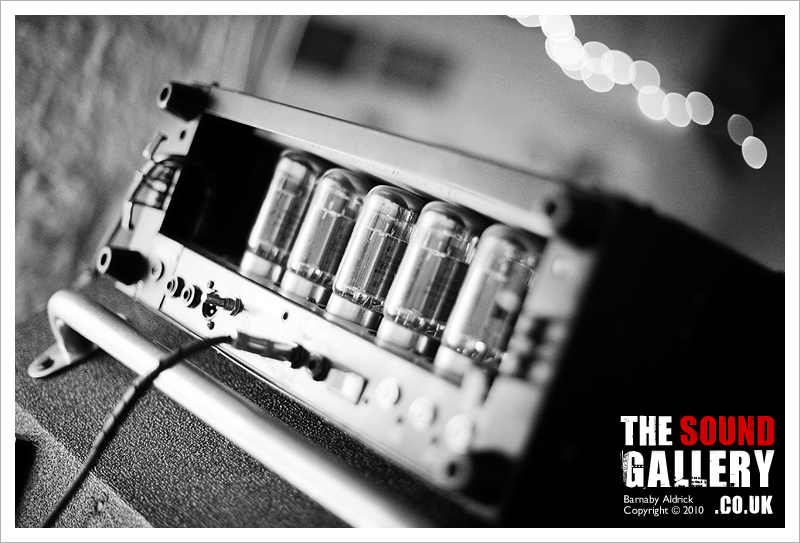 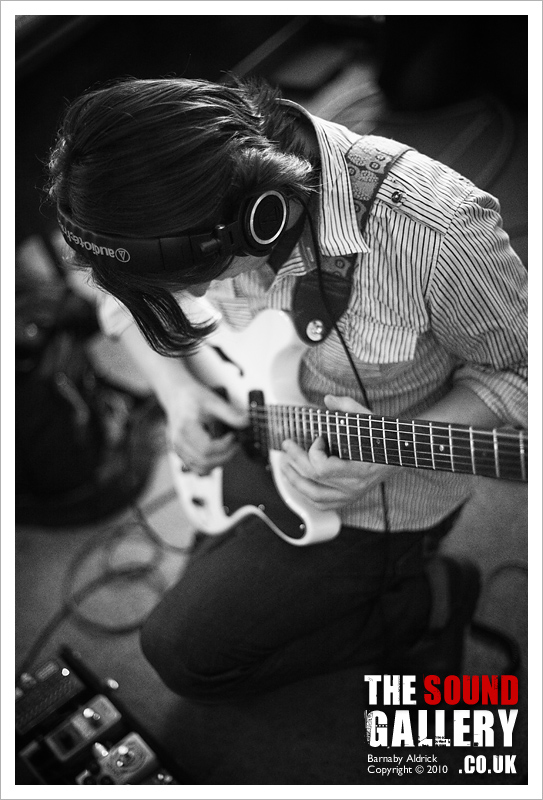 Rich, trying to get what’s in his head out through the pedals. 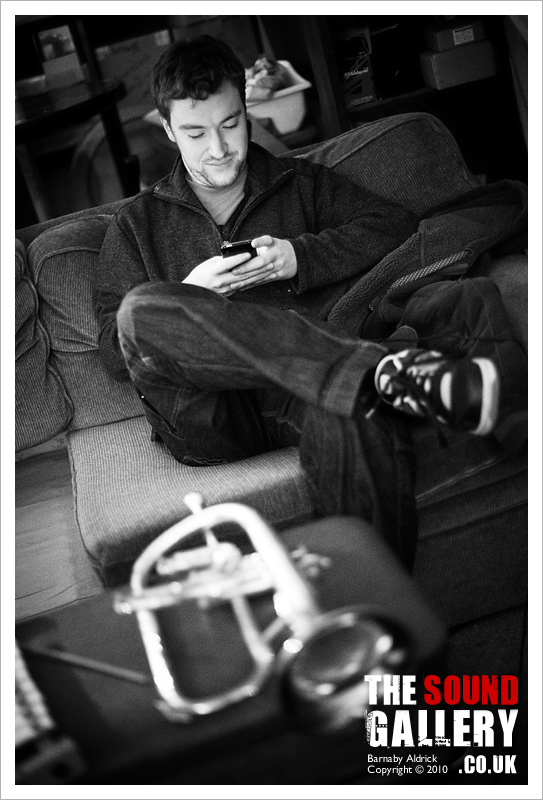 They weren’t doing much brass on today’s track, but I caught this one of their trumpet man chillin’ in the corner. 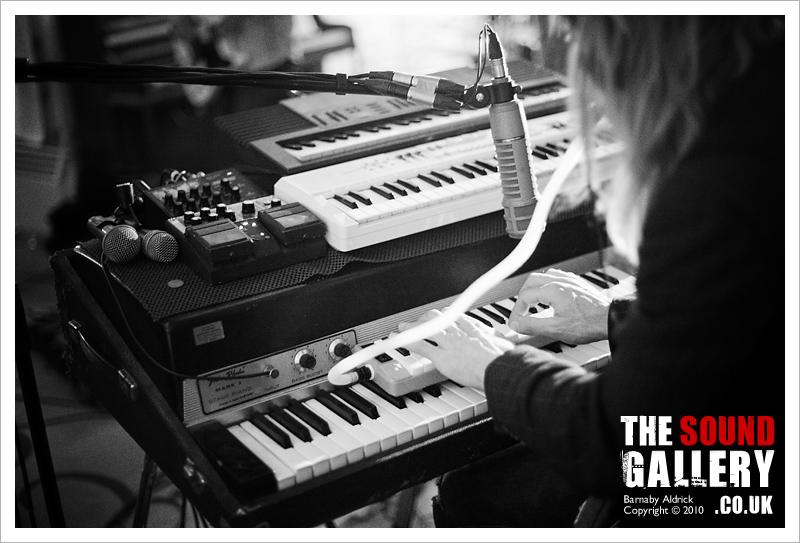 Ed, also an ace photographer, was working his many varied keyboards. The sounds you get blowing into this melodica is quality. 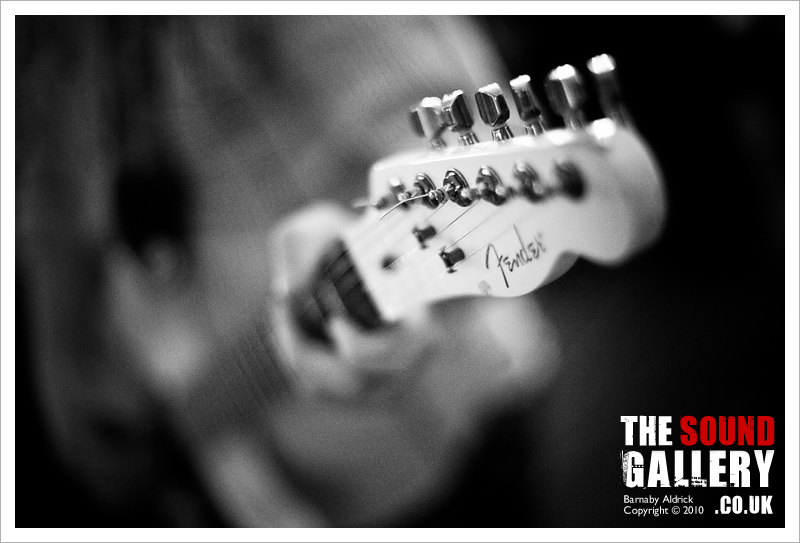 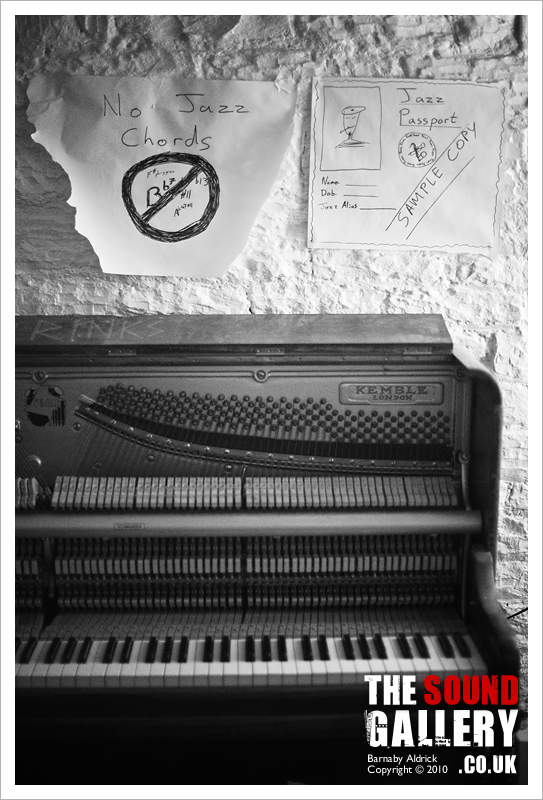 The studio was so full of fantastic instruments, paraphernalia & details they’d added over the years.

I was particularly amused by the ‘No Jazz Chords’ poster. 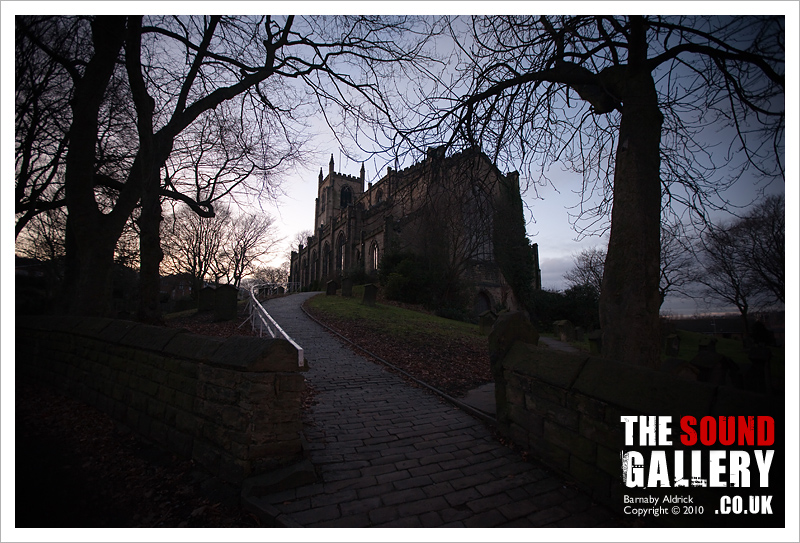 It was a good few hours later when we left, but probably only half way through their working day (which I hear generally rolls from 11am>4am)

Hope & Social are such an interesting forward-thinking band, tapped into social media (check their website, twitter: #hopeandsocial & facebook) and published their last album ‘Architect of this Church’  a la Radiohead with a ‘pay what you like’ policy.  As it can be yours for as little as 1 pence you’d be mad not to get involved, especially as the last three songs are sublime.  Download it here now!

You’ll no doubt be hearing more from the 3B’s & the Hope & Social crew, so stay tuned…