I was approached a week or so ago by the Leeds Guide Magazine editorial team to shoot their upcoming spring fashion feature.  They’d booked the Corn Exchange (mentioned in my last post, as the place where I technically became a professional photographer!) and were looking for models.  On our recent 3B Media Urban Portraits training workshop we’d recently used our stalwart models Stef & Alex, so we asked them on board.  It was great of them to get involved too, cos they’re so easy to shoot 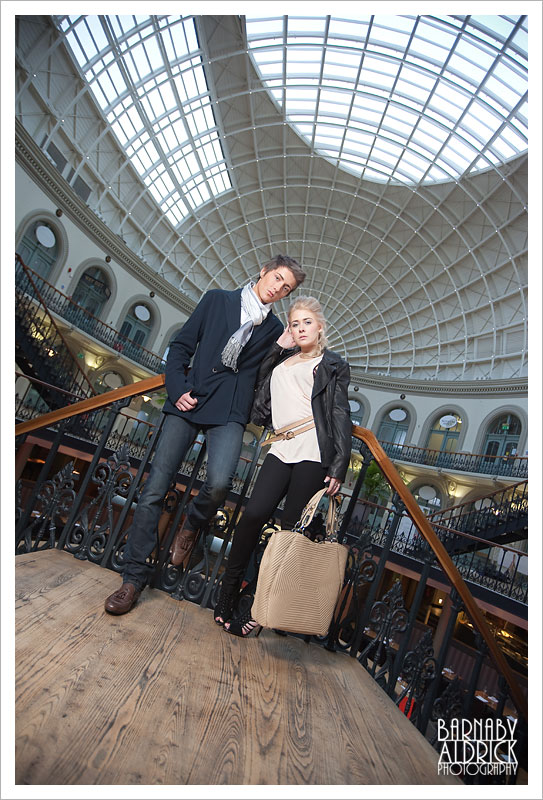 Last time we did a similar feature was an Xmas party clothes shoot with Miss Harrogate, Vivienne Edge.  A geezer called Ben Spear of Spearhead design was helping assist with me on that issue and was invaluable helping set up flash & reflectors.  I was really pleased with how the images came out actually, considering we’d only used 2 speedlight flashguns.  Check out the blog post about it here. 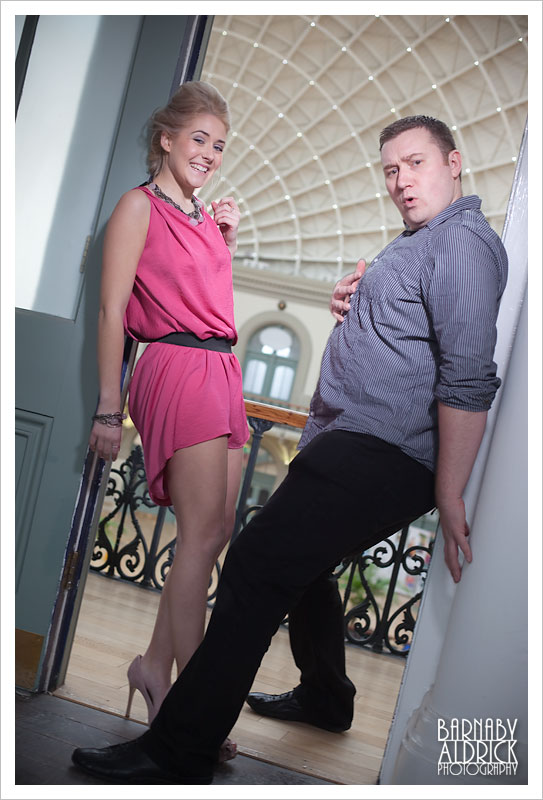 He’s a legend when it comes to studio flash and his house is like a photo-grotto, stacked to the roof with random exciting photo gear.

This time I had my 2 Elinchrom Quadra mobile studio flashheads with me (which are essentially mini studio flashheads that run off a small rechargable battery) and Cris brought a battered ex-rental giant softbox he’d bought, called an Elinchrom Recta Lightbox (which cost £650 new!) and had hired a recflector & honeycomb grid to get better control of the rimlight. 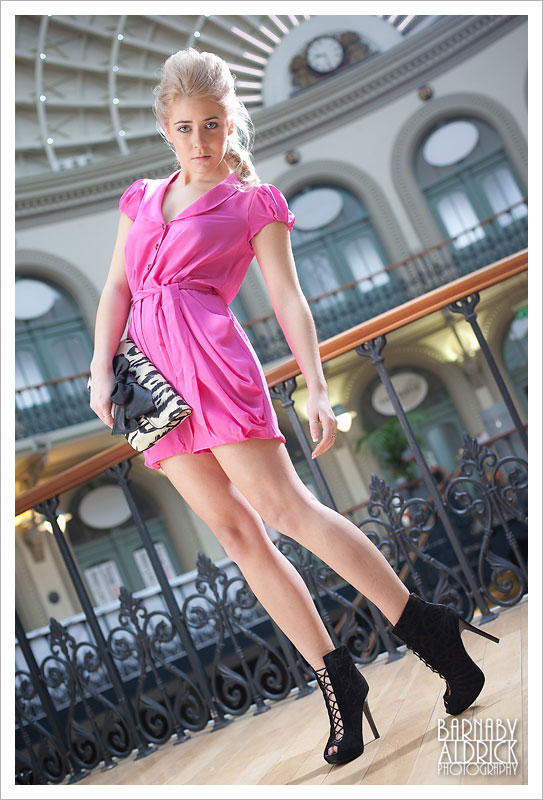 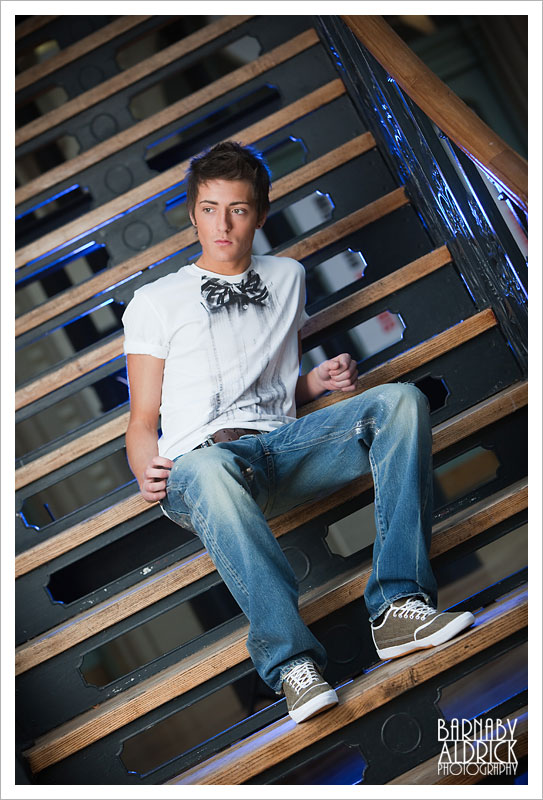 We were playing with options of Alex on the stairs and put the gridded rimlight behind the stairs, then Cris put a blue gel over it, and we got this effect. 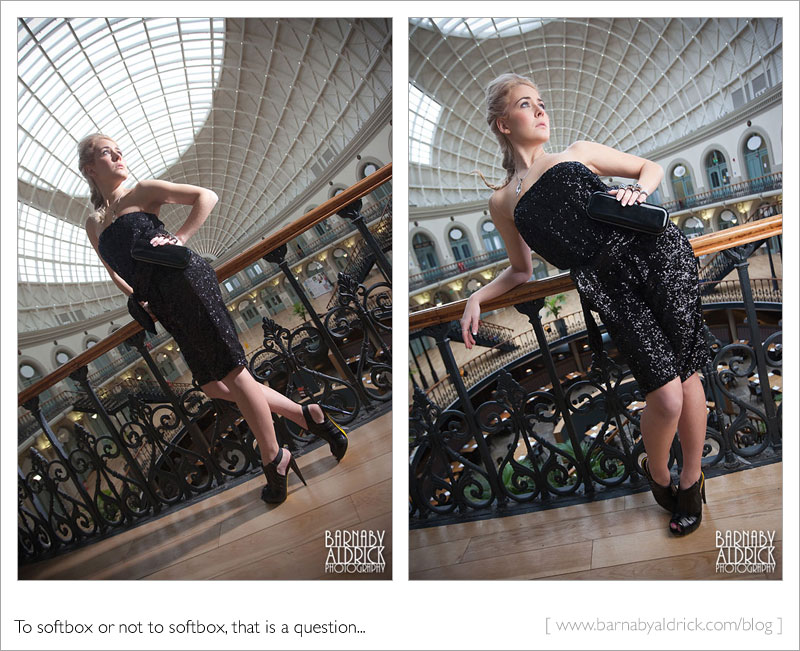 This one of Stef, up on the Corn Exchange balcony shows the difference between using one light, a gridded spot (left) or Recta softbox (right).

As I’m always learning with flash, especially manual studio gear, it was great to have Cris there to play with different setups. 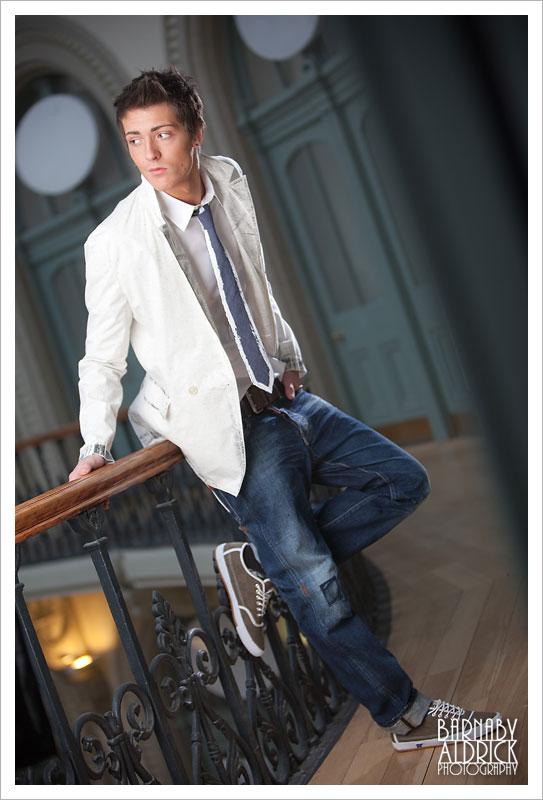 I liked this one of Alex on the balcony.

It’s hardly perceptible, but that rimlight around the hair & shoulders really picks the subject from the scene 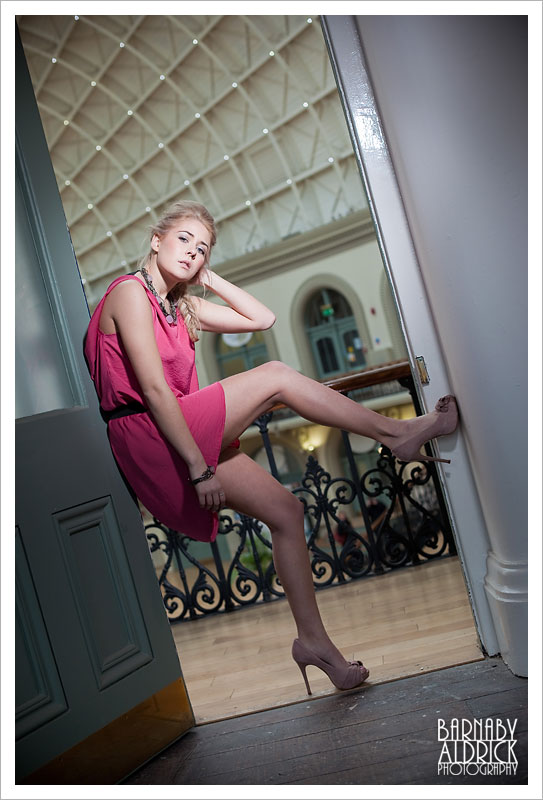 I’ve never really used honeycomb grids on my flashes before, but this shows how a grid ‘snoots’ (directs) & ‘feathers’ (softens the edges) of the flash into a small pool of light.

But it does leave Stef with rather grey legs. 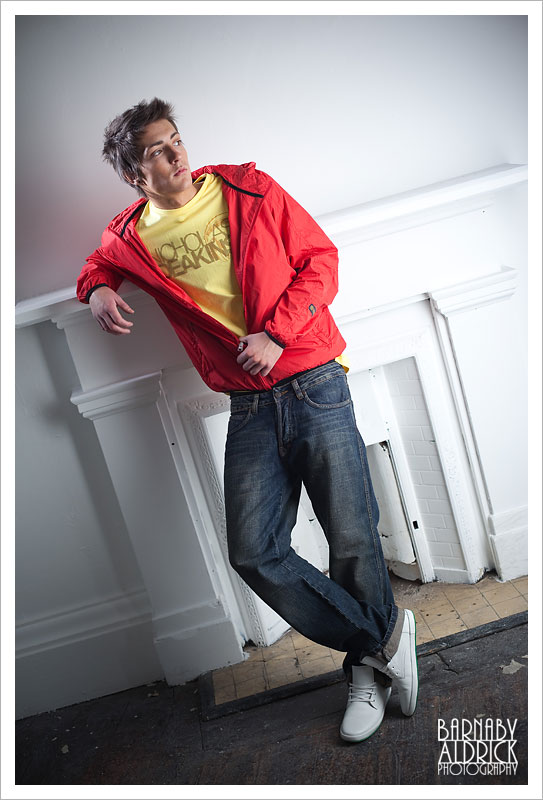 We started to get into our stride with the key light / rimlight setup in this empty Corn Ex retail unit. 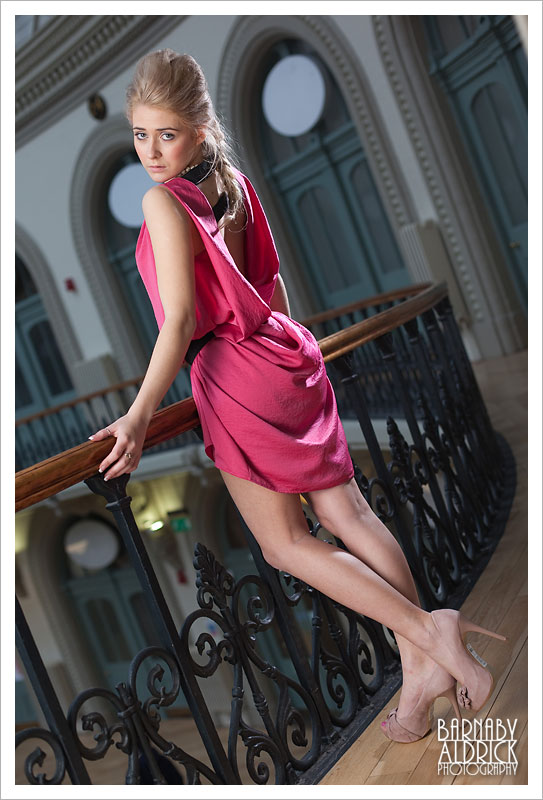 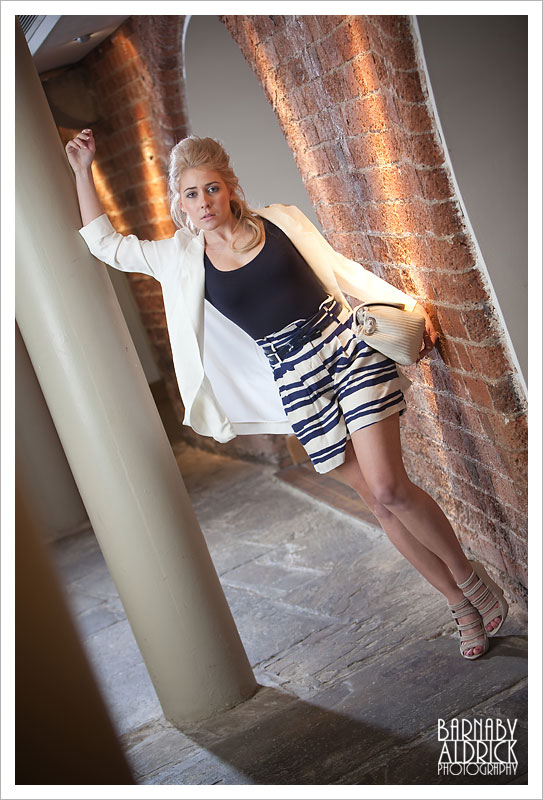 Down in the basesment we had nautical-themed clothes.  We took the grid off the rim and it threw quite a lot of light in 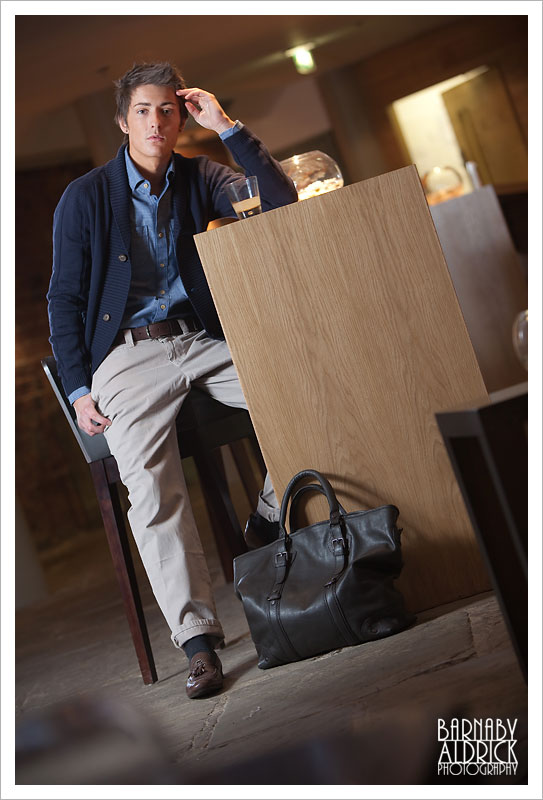 Sailor Alex, fresh off the yacht 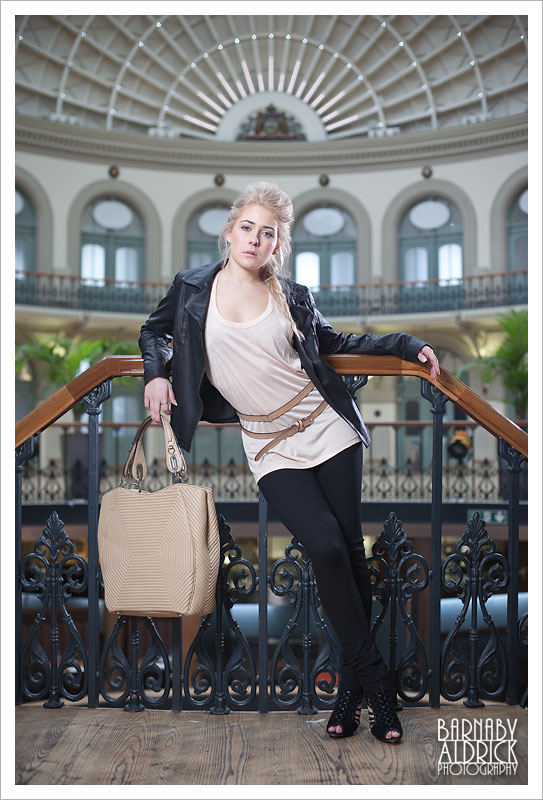 A final shot of Stef workin’ it in the dramatic Corn Exchange.

It was such a lovely backdrop to shoot against, but I’d really like to thank Stef, Alex & the Leeds Guide crew for making this all go so smoothly, but expecially to Cris for bringing his ideas, enthusiasm & fun toys.  We only had 3hrs to shoot about 8 different setups, but it was a real pleasure to shoot and I’m well chuffed with the images.  Keep your eyes peeled for the the cover of the next issue!

ps. I realise now I should have stepped back and photographed some of the setups we used, cos I always find it interesting seeing behind the scenes shots from these kind of shoots.  I’ll do more of this in future.