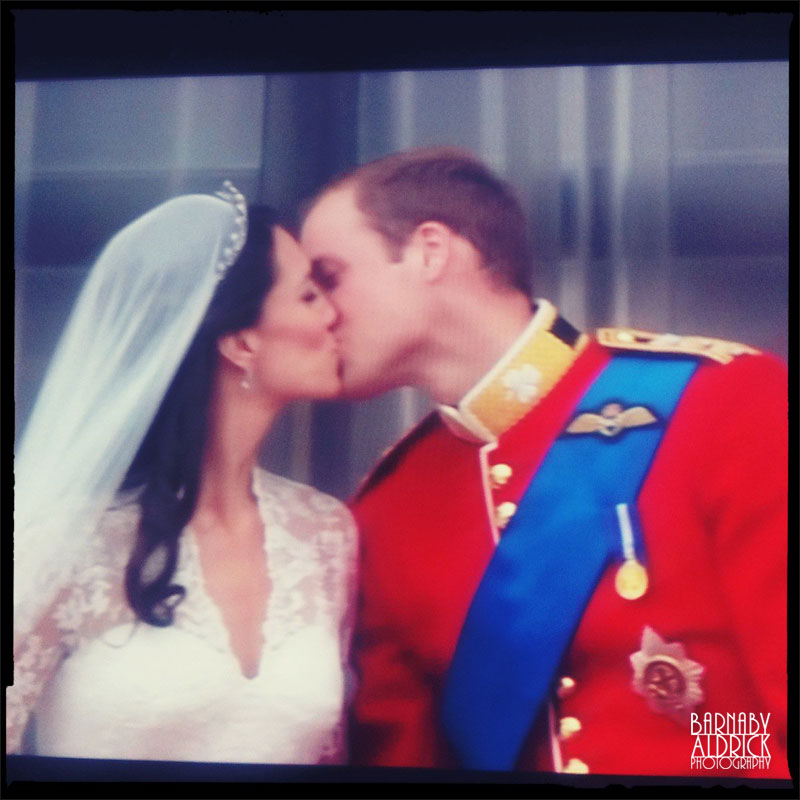 A snappily dressed couple in love; a double kiss, Princess Beatrice’s misguided hat selection, royal minibusses, a sunny-yellow dressed Queenie, a frowning flowergirl, QILF ‘trending’ highly on Twitter and a patriotic afternoon of government-endorsed street parties… #RoyalWedding was quite the event indeed; a moment where history was laid in both traditional & modern foundations.

Like many in this country I’m semi-ambivalent about Royalty, and wasn’t much interested in the run up to the wedding, but knew I’d be watching.  Personally, I was intrigued to see how it would be packaged for a social media/reality TV obsessed nation.  Would they be able to deliver it in a way and satisfy MTV-savvy youngsters as well as traditionalist oldies.  With what feels like an increasing generational disinterest in Royalism, the event somehow felt a like a make-or-break, turning point for the British monarchy.  Wills and Kate seemed like a lovely, grounded couple, and I genuinely hoped their wedding would be all they wanted. 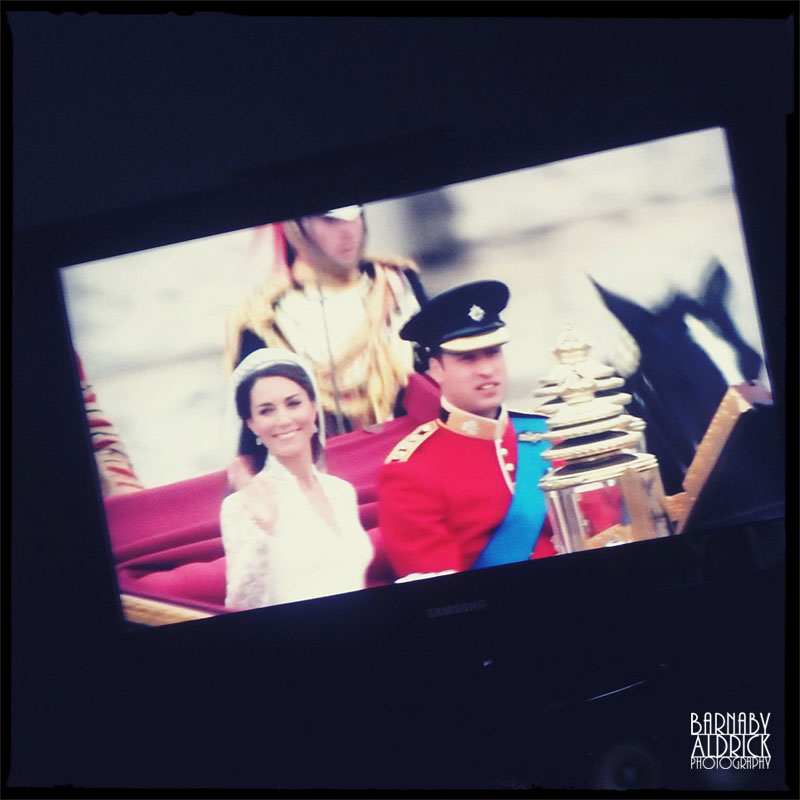 It turned out to be a lovely do indeed!  Instead of an event pumped with gilded carriages and pomp & ceremony, up sprung a public empathy for a charming couple & a national patriotism I don’t think I’ve experienced before.  While America loves waving their flags and chanting ‘U’ ‘S’ ‘A’, it feels to me that national pride & the Union Jack have become associated with dashed World Cup football hopes and are synonymous with Xenophobia & the BNP.  In such a politically corrected nation, it’s dangerous to show allegiance to the flag.  Yet watching seas of Union Jacks fluttering and being part of a nation letting down their hair felt untainted and special. 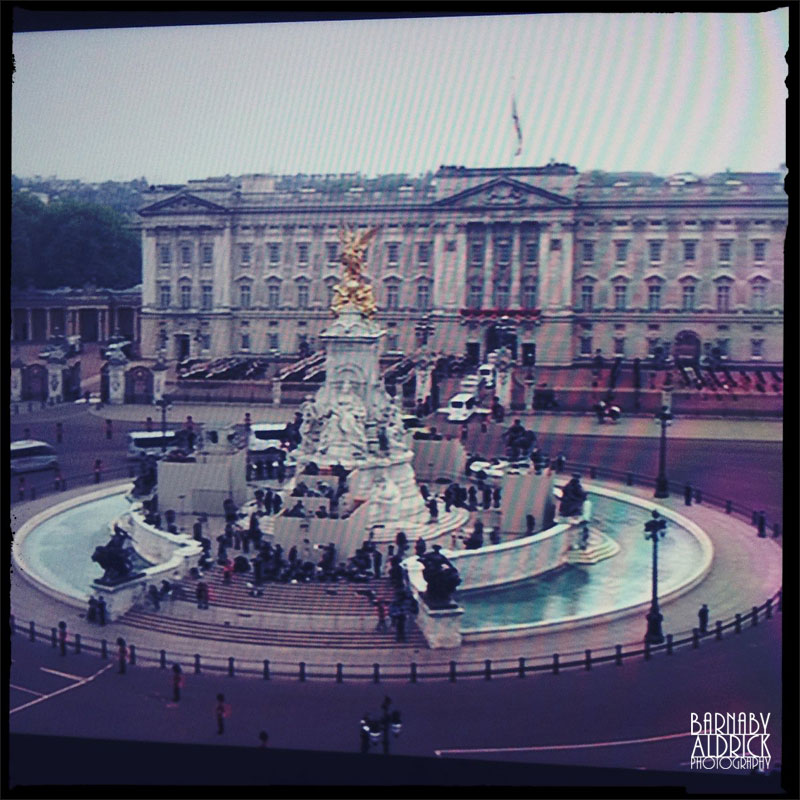 Plus those mini-busses were hilarious.

While I’m an avid facebooker and enjoy dropping the odd tweet or two (follow ’em here), I’ve never really watched a public event with twitter & facebook open to one side.  Watching Kates foxy sister walk down the aisle and reading instant amusing updates about Harry’s chances was like being part of a live digital conversation amongst friends.  I saw a stateside photographer pal @thebecker tune in from California at 2am to watch, and others around the world did likewise (check ’em here).

Apparently, the royal wedding set an all-time record traffic for a live video event, surpassing other major video events like Michael Jackson’s funeral and President Obama’s inauguration. The nuptials themselves had 1.6 million concurrent video views, making it the biggest event to be watched on the Web.  A spokeswoman for Facebook said that worldwide, more than 6.8 million people commented on the royal wedding through public status updates on Facebook on the day of the wedding, and more than 9.4 million comments through status updates in the week running up.  So much for growing disinterest! 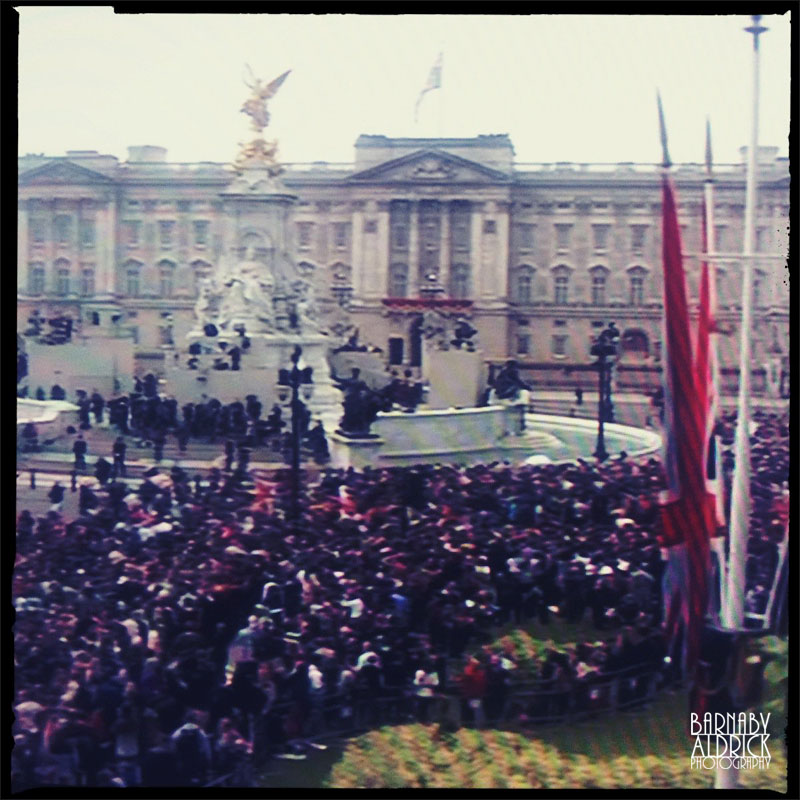 The whole do felt amazingly organised, with the right balance of tradition (great to see the Lancaster flyby) and casual modernity.  After the balcony kisses Wills & Kate did a ‘driveby‘ to Clarence House for the evening do in Prince Charles Aston Martin DB6 (which FYI, runs on E85 bioethanol made from English wine wastage!). 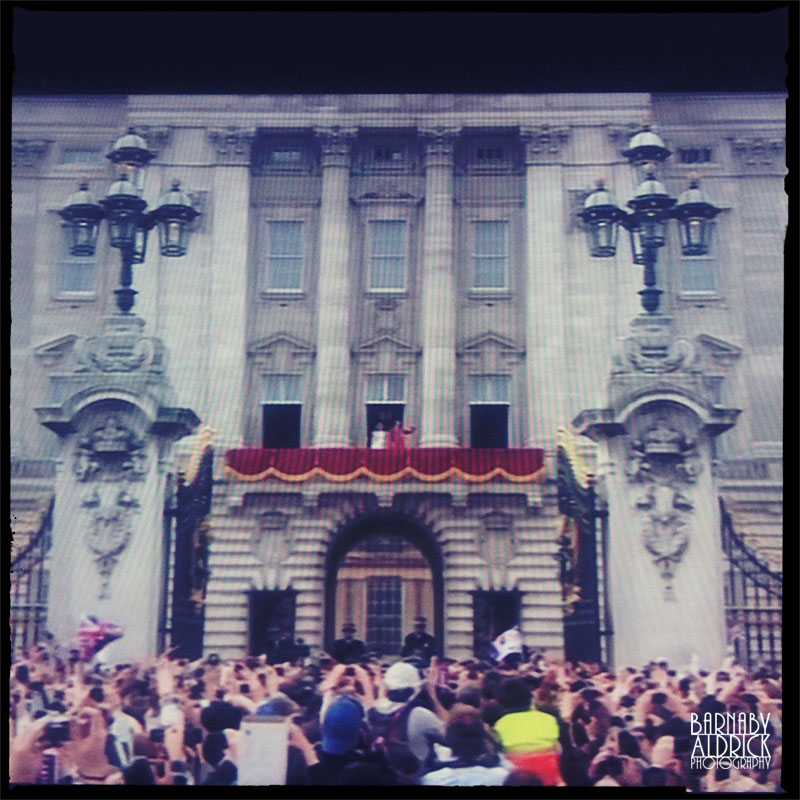 Coverage was all it could be; and all credit to the BBC for placing cameras literally everywhere and championing eccentrics & mentals in fancy dress.

It was great to later hear that lipreaders had deciphered royal conversations, such as William joking to Kate’d Dad: “We’re supposed to have just a small family affair.” and at noon, Queen Elizabeth II saying to Prince Philip: “It was excellent”.  All very humanising.  Even after their 300 dinner guests had enjoyed 10,000 canapes, and a slice of the 8 tier, 17 cake cake, it was fun to hear that revellers still rocking at 6am were invited to Prince Harry’s Bacon butty survivors breakfast!

A tog buddy of mine, John Lloyd, was down in London enjoying a spot of street photography and I love these two images he just posted to Facebook: 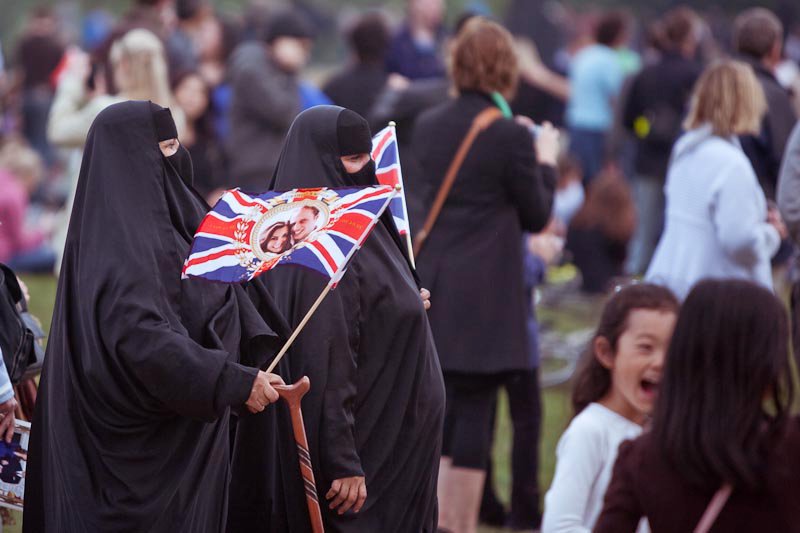 His comment under this one was ‘Eat this, Daily Mail’ 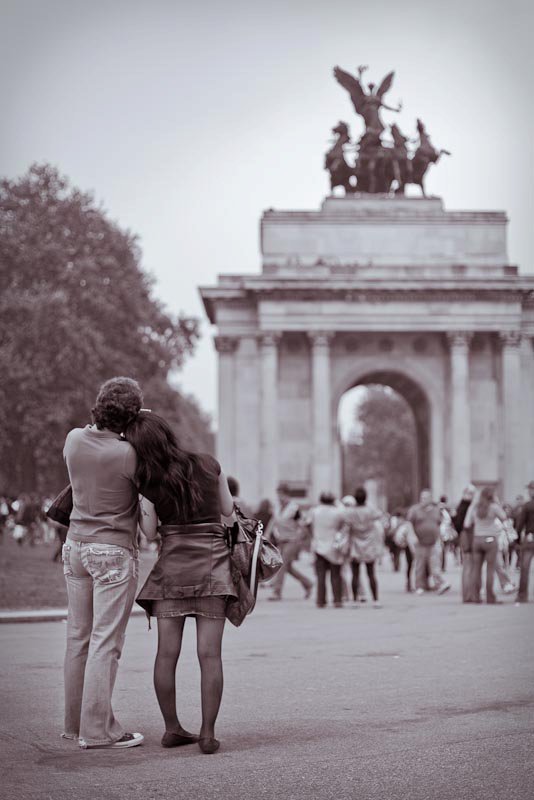 And I liked this moment he caught as people watched the Lancaster Bomber, escorted by a Spitfire & a Hurricane fly by. 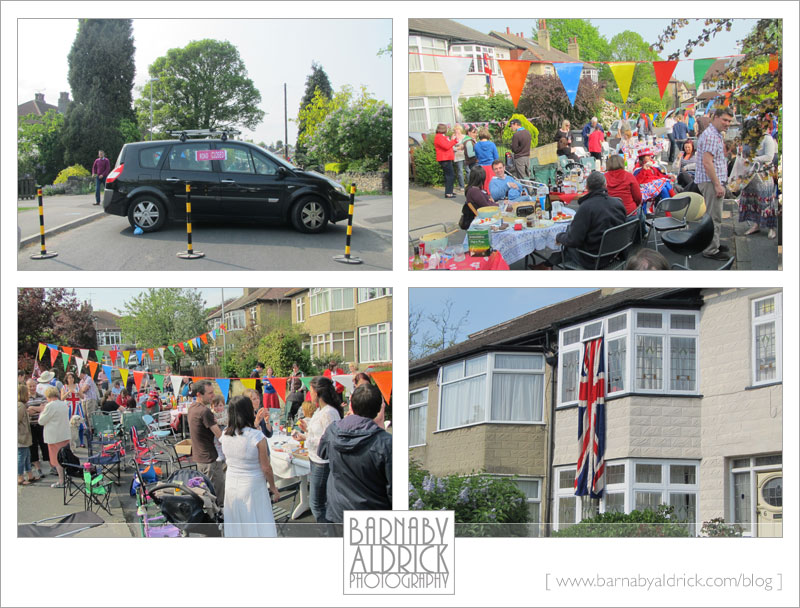 The Prime Minister, David Cameron, announced that although you should officially petition to your local council to close off your street for a street party, you don’t really have to.  So all over the country, folk closed off their streets for impromptu street parties, and there was a palpable spirit of fun in the air. 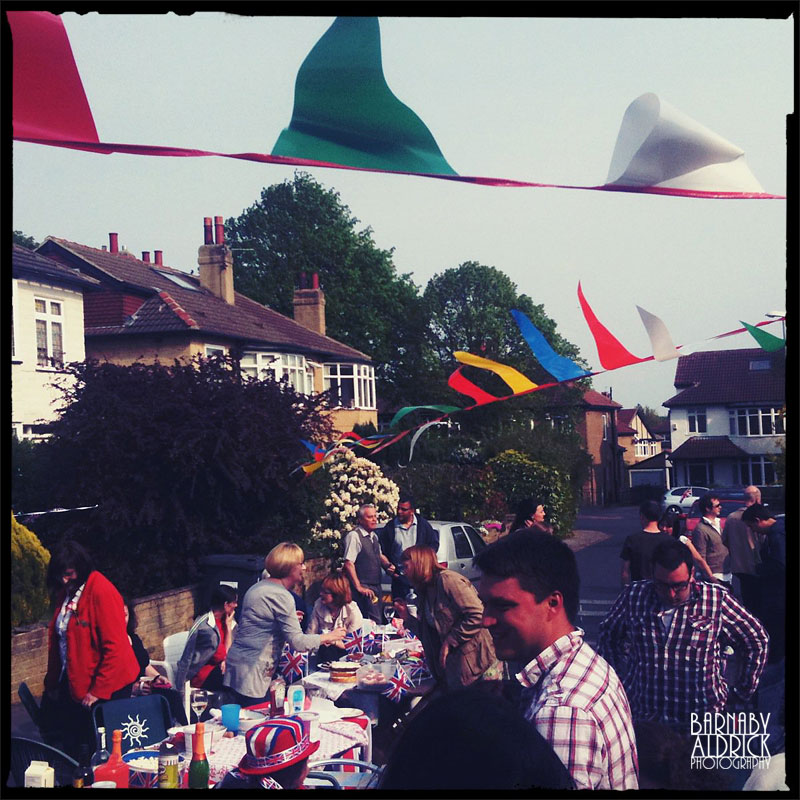 (The above hipstematic iPhone shot looks like it was too)

The usual get-on-with-your-life-behind-closed-doors-without-disturbing-the-neighbours rules were dropped in favour of sharing cake & booze. 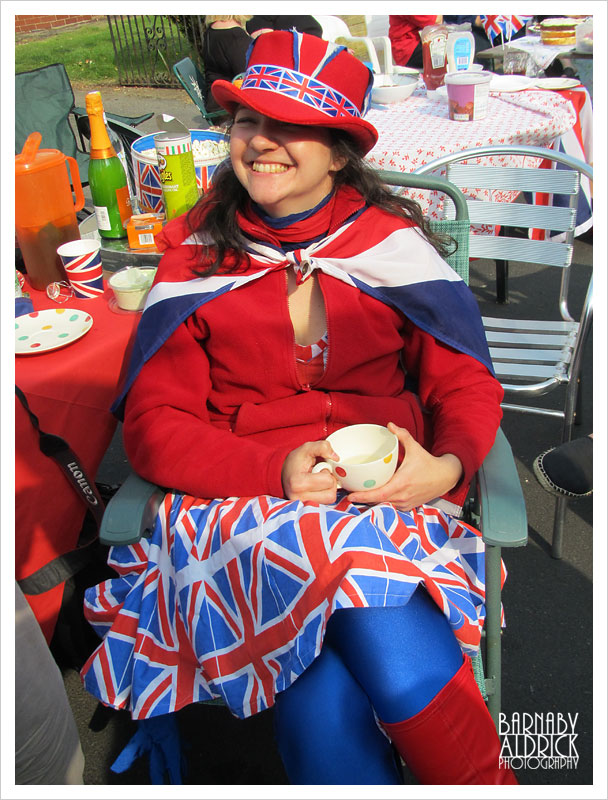 I’m not sure you could let your hair down much more than this. 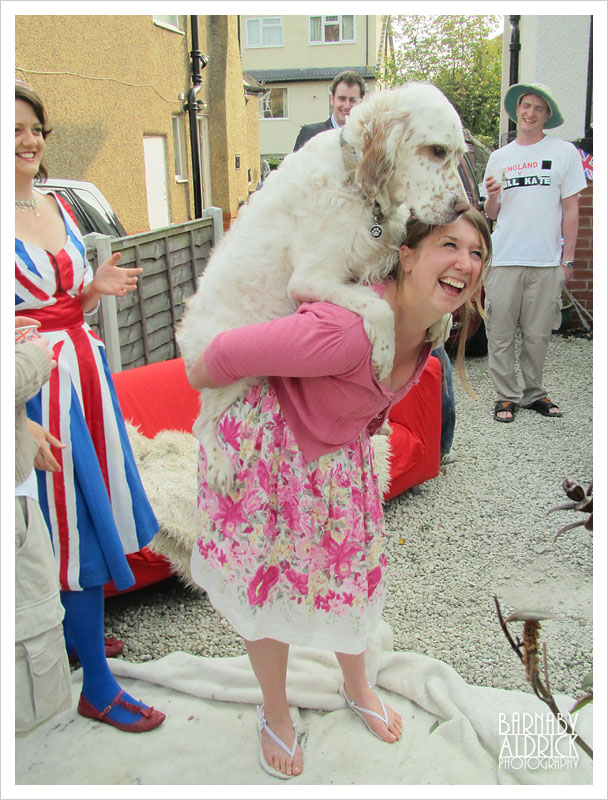 For some reason, dog piggy backs were the order of the day 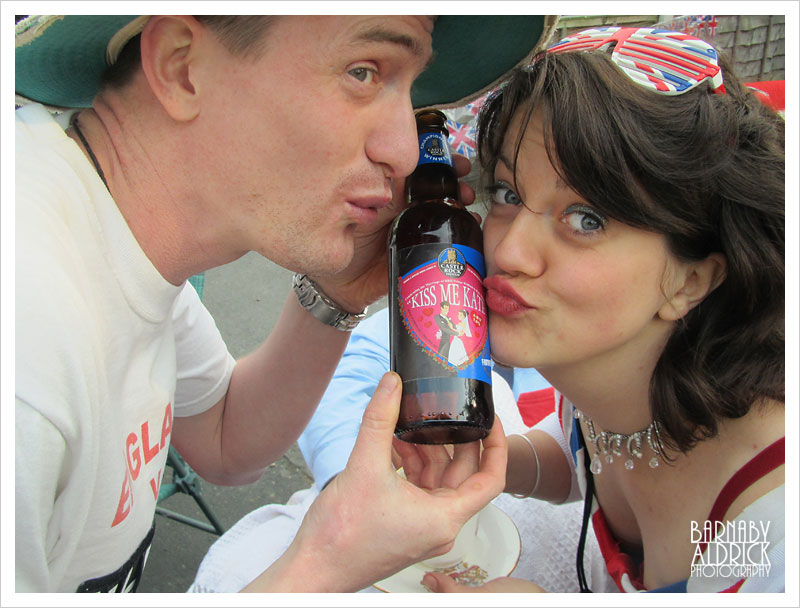 …as were dubious commemorative items like ‘Kiss Me Kate’ beer. 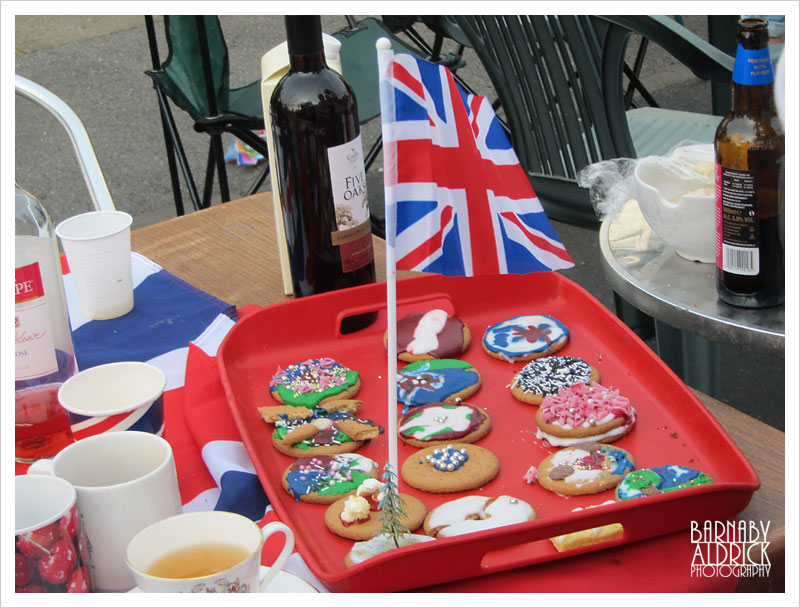 When enough Pimms had been consumed, so began the decorate a biscuit competition… 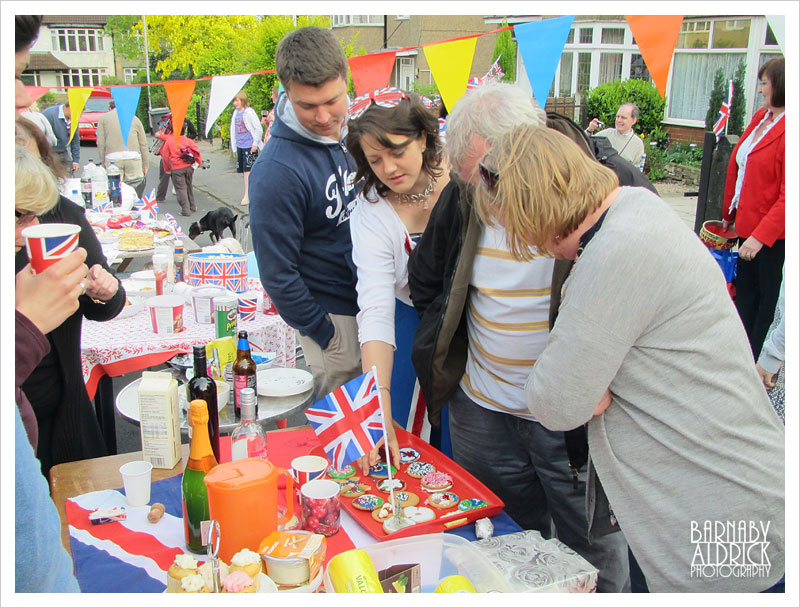 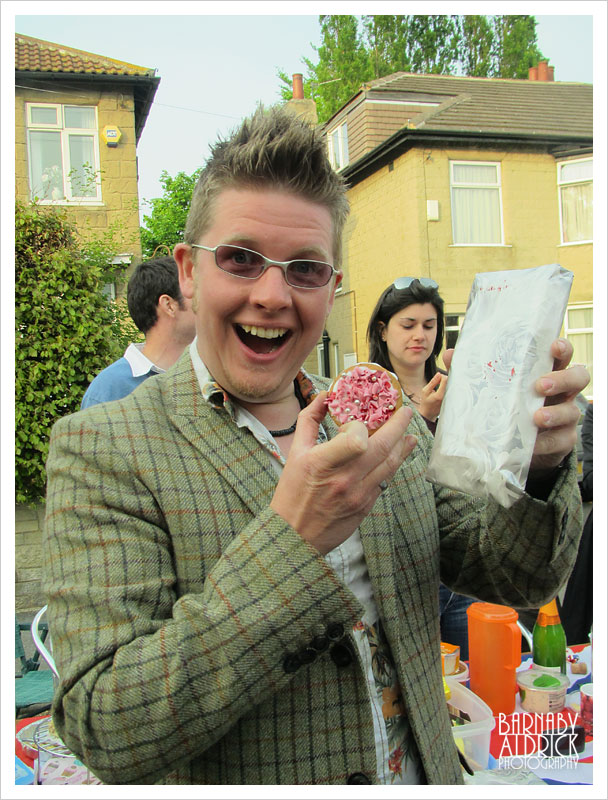 And here’s me proudly sporting the silver prize for my ‘girly’ double-decker strawberry sprinkle with rasberry pimms couli creation.  #Proud. 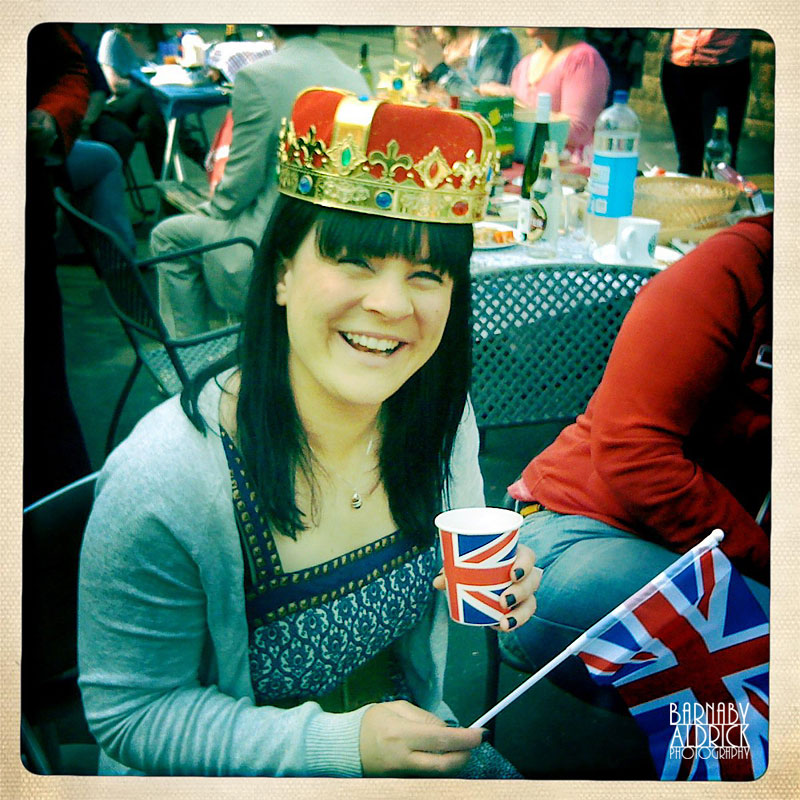 All-in-all, after a touching wedding, followed by a nation united in celebration, it was great to once again be allowed to feel #ProudToBeBritish.