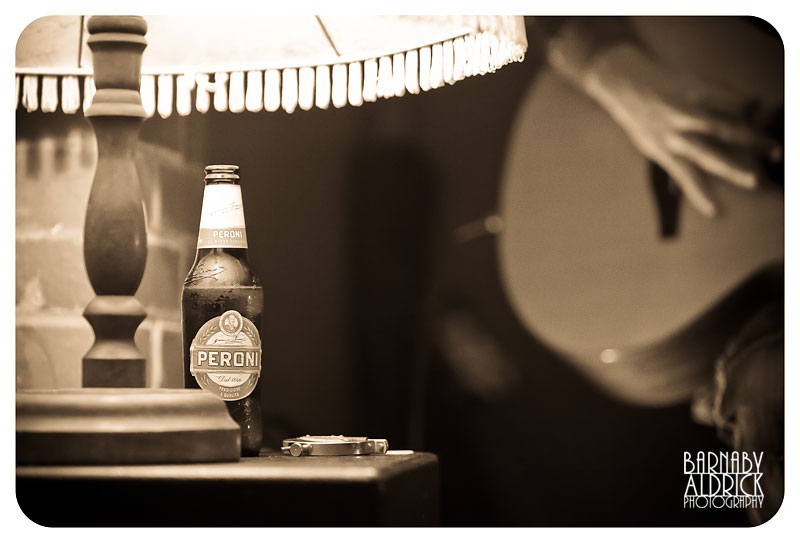 Some of you may know that I host & promote a band night in Leeds called The Sunday Service, on the last Sunday of every month. 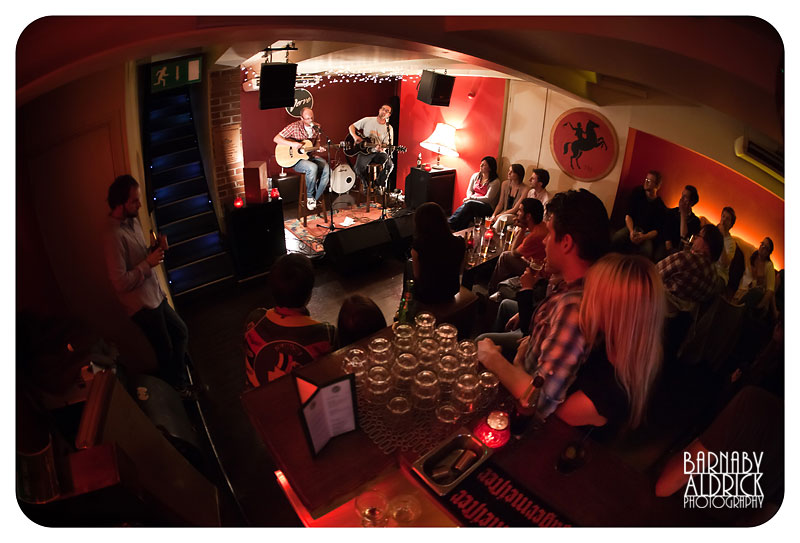 It’s a cheeky little night in a small (but perfectly formed) room in the basement of Verve Bar. The night’s been running for coming on 3 years now and the night was originally born out of a desire to give my near and dear a reason to meet every month, over a quiet drink and to a (generally) guaranteed standard of musical calibre.

As it’s only once a month, I feel I can skim the cream off the local music scene and get them down to play to a listening crowd in exchange for beer and pix.  I light the stage (with our very own Sunday Service lampshade, as well as hidden others) & the nights become known for it’s quality live images, further allowing us to get ace acts down. 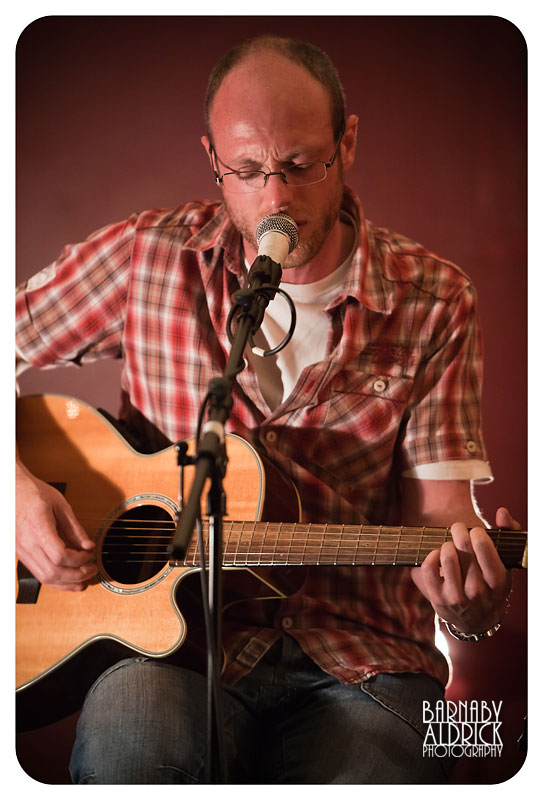 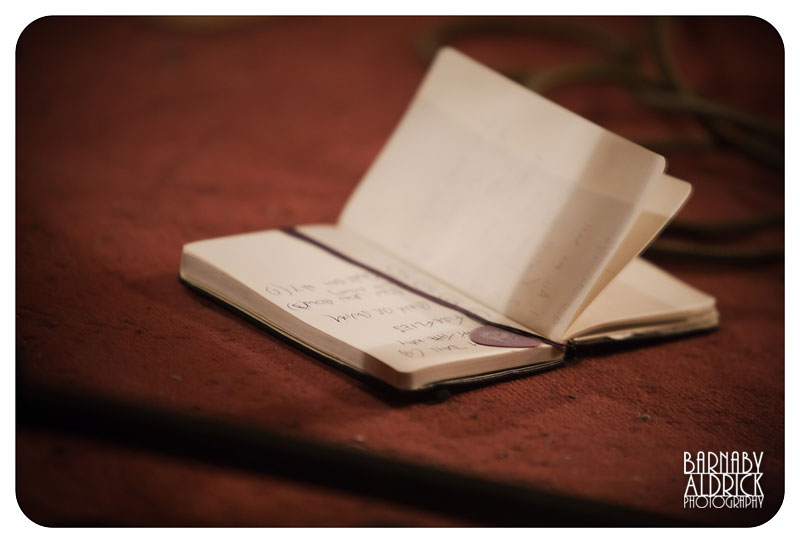 I also look out for details lying about during the set.  I liked this one of Simon’s setlist & plectrum. 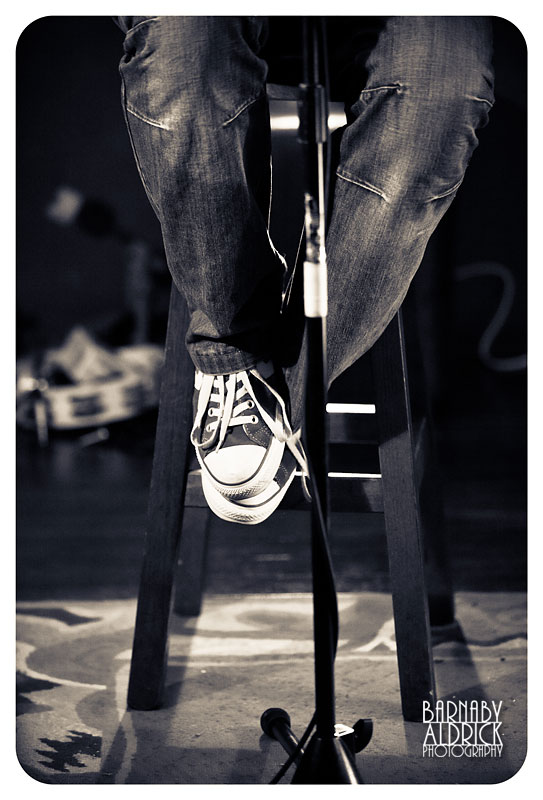 As a wedding photographer by trade, it’s become kindof a habit getting the ultimate shoe-shot 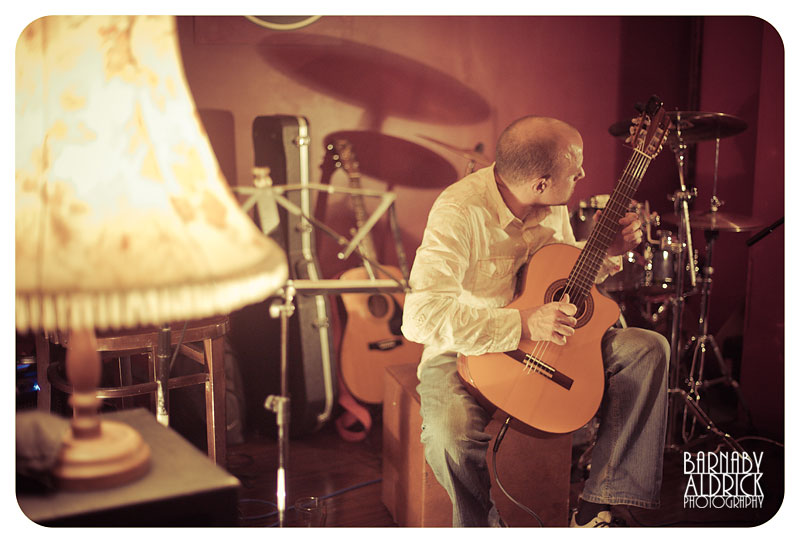 I like to book a variety of acts, rather than your classic depressed singer songwriter with ripped flares.

This one’s a chap called Arlen who played last month as The Acoustic Conquistador. 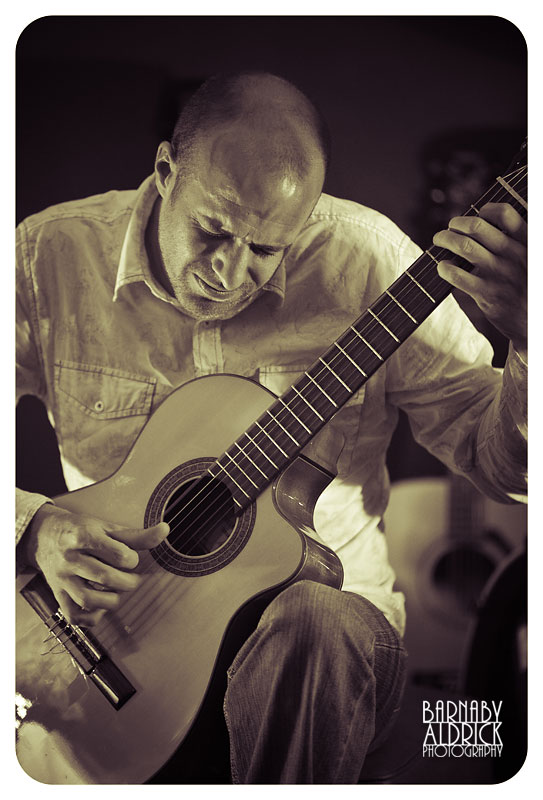 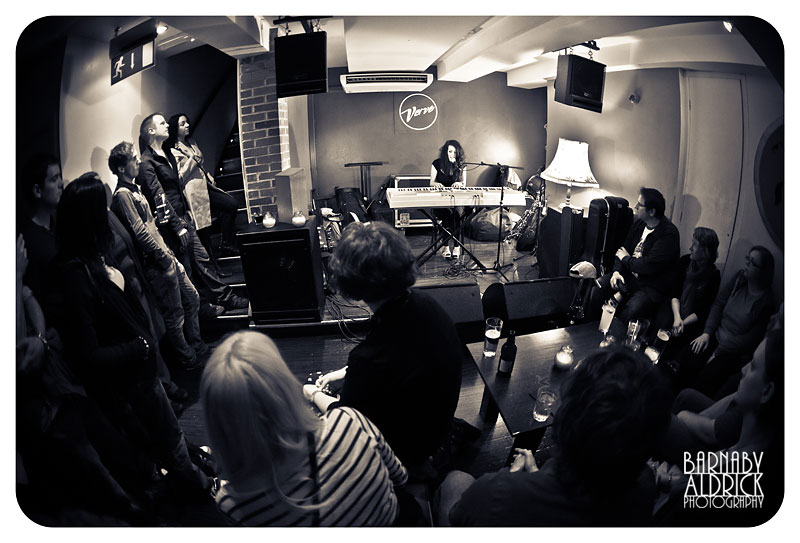 A good few months back we had Ann-Drury pop in with possibly the biggest keyboard I’ve ever seen. 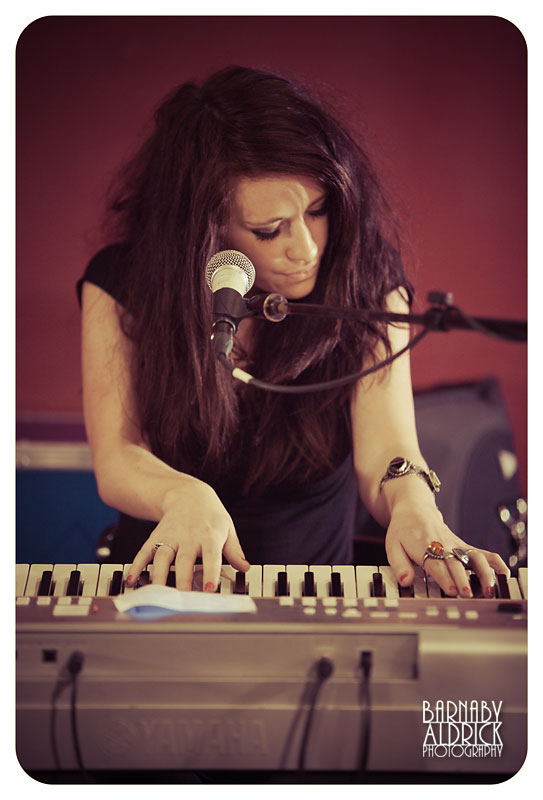 As it happens, Ann’s manager has approached myself & the 3B Media chaps to make a possible music video for her. 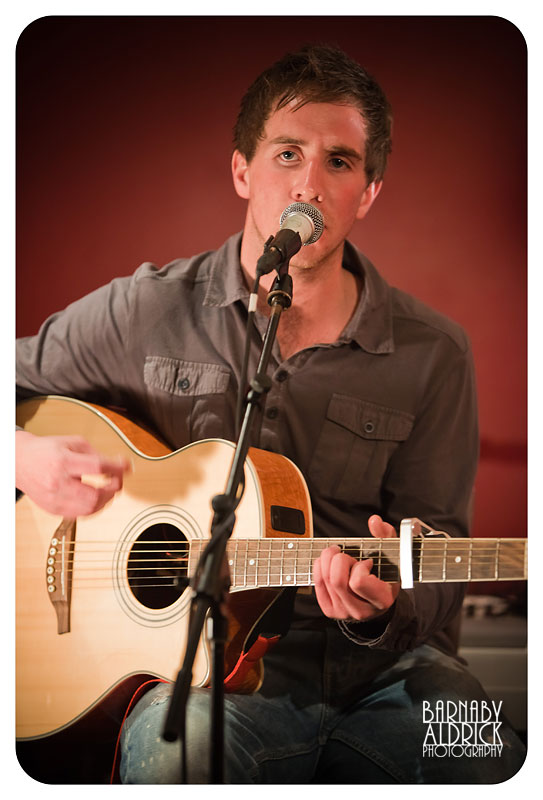 Another straight portrait, this time of The Nelson Touch, bathed in a nice diffused lampshade light.

The movement in the hand is usually not deliberate, but often adds to the feeling of movement (especially when the rest is nice and crispy).  Shutter speeds are generally round the 1/60th speeds @ f/2.8 & between 800>1600ISO, so movement can be hard to avoid, unless you step down to a faster prime, like the 50mm. 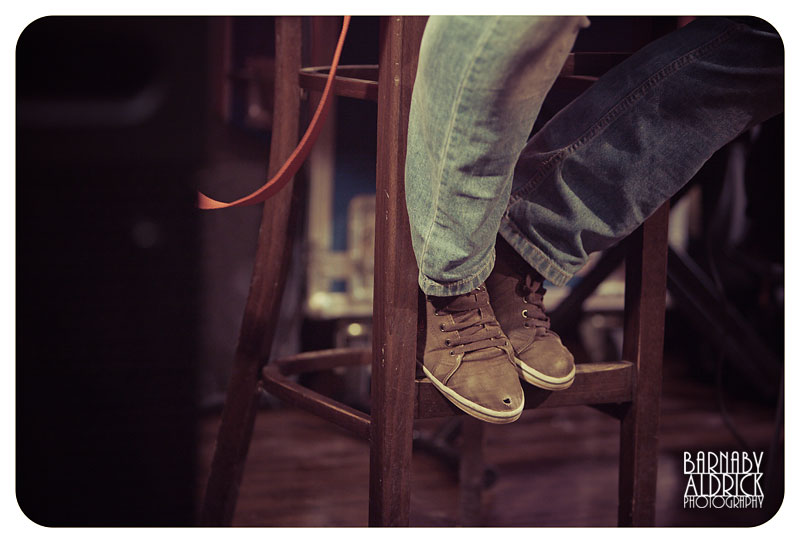 Another bit of BAP foot fetishism!  I think a musician’s shoes say a lot about the musician.  In fact, I think everyone’s shoes say more than they realise about them.  [I probably shouldn’t disclose how many pairs of cowboy boots I have here] 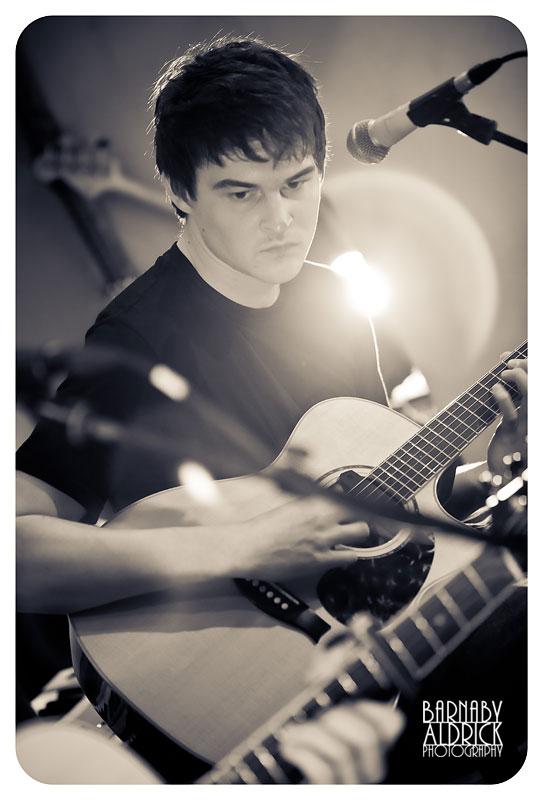 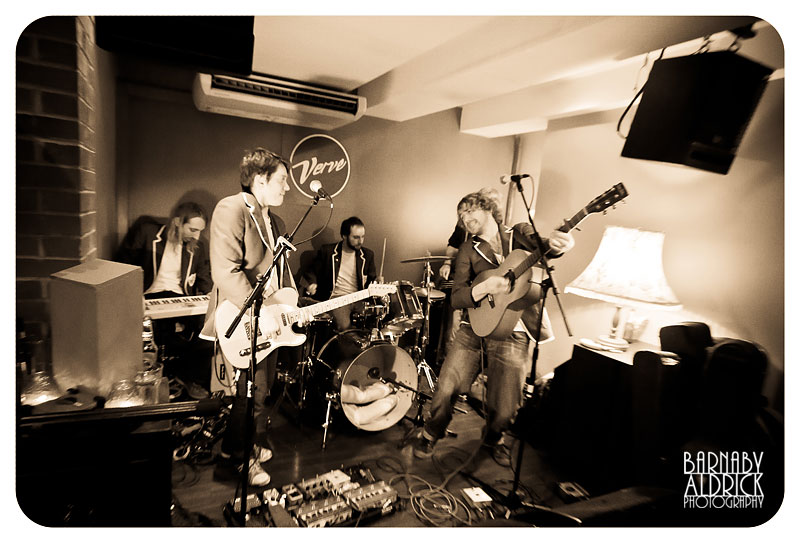 Back along we had the mighty Hope&Social along to headline – they always bring the fun.

Again, 3B Media have done various exciting projects with these astutely social-media aware gents, including making a documentary for a ‘come dine with us’ event, where they cooked a meal for 70 fans before playing them their new album (check out the pics/documentary here). 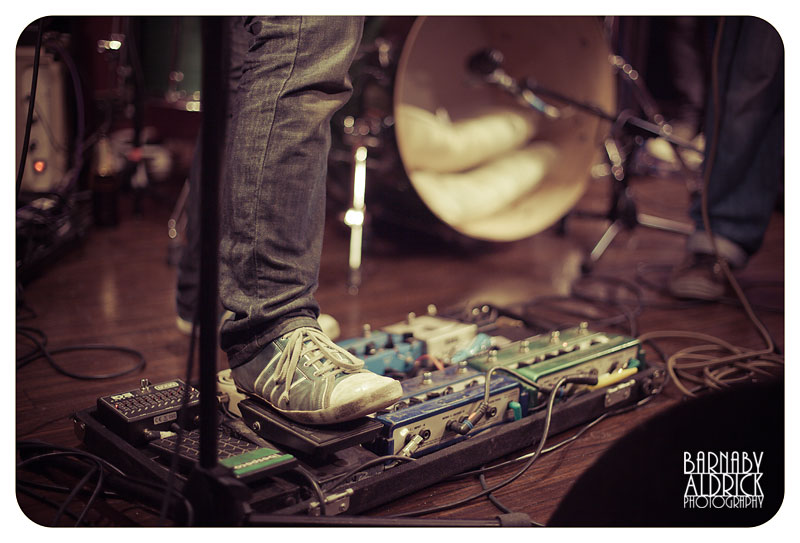 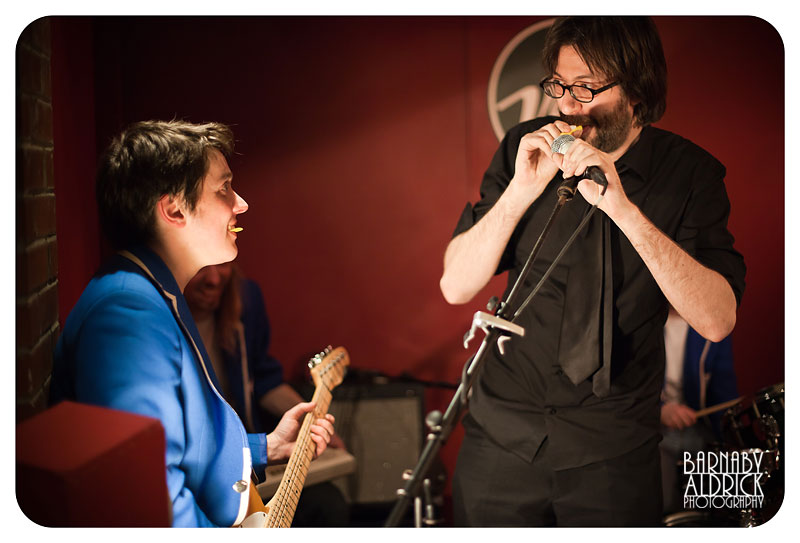 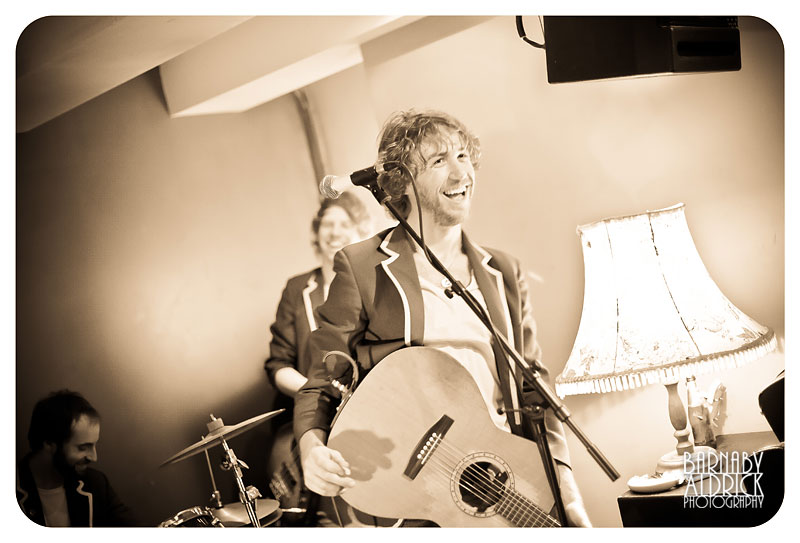 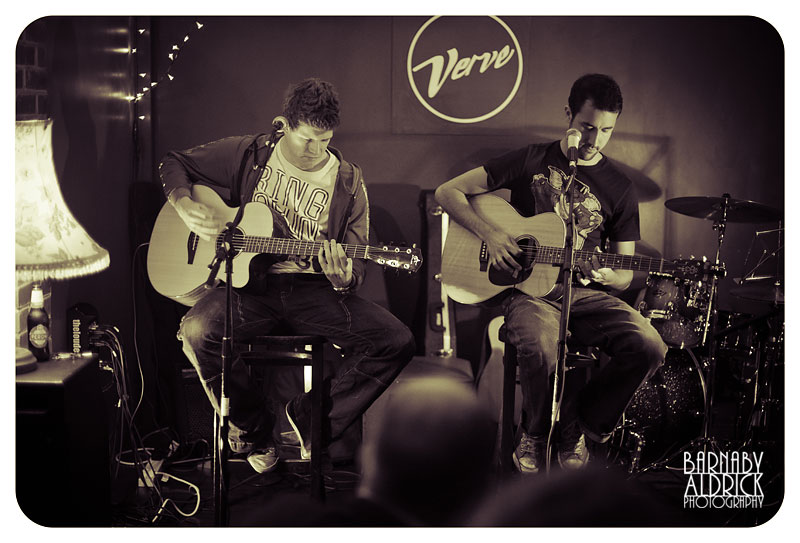 We had Darke Horse along from Sheffield and away from their comfort zone of full-on 5-piece rock band. 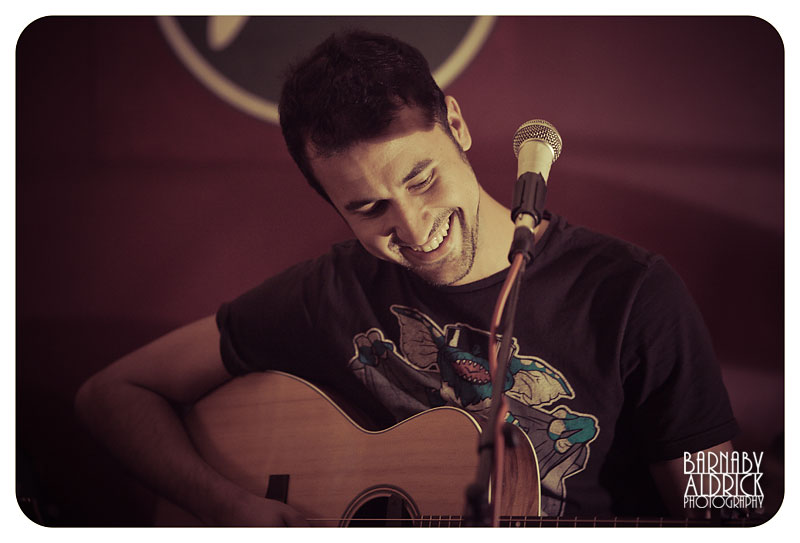 Like in all my photography, I’m generally watching out for a natural moment 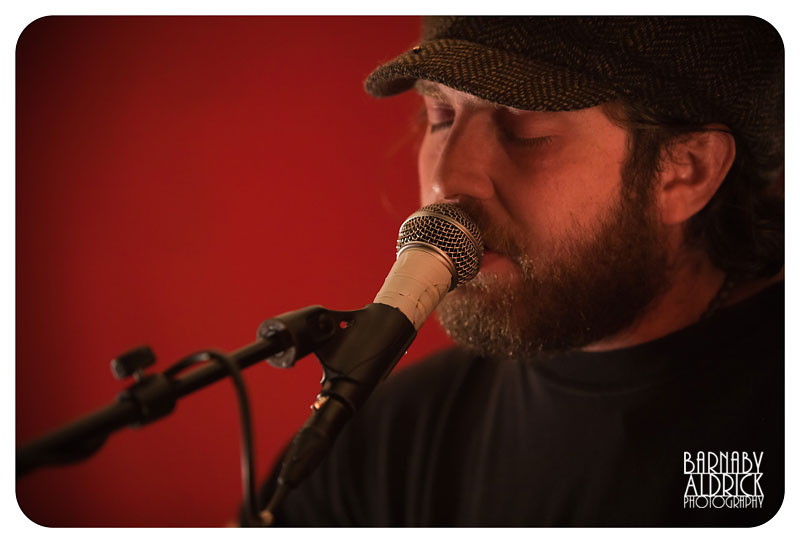 2 months back we had the most excellent Boss Caine along to play.  A hairy, yet surprisingly photogenic chap. 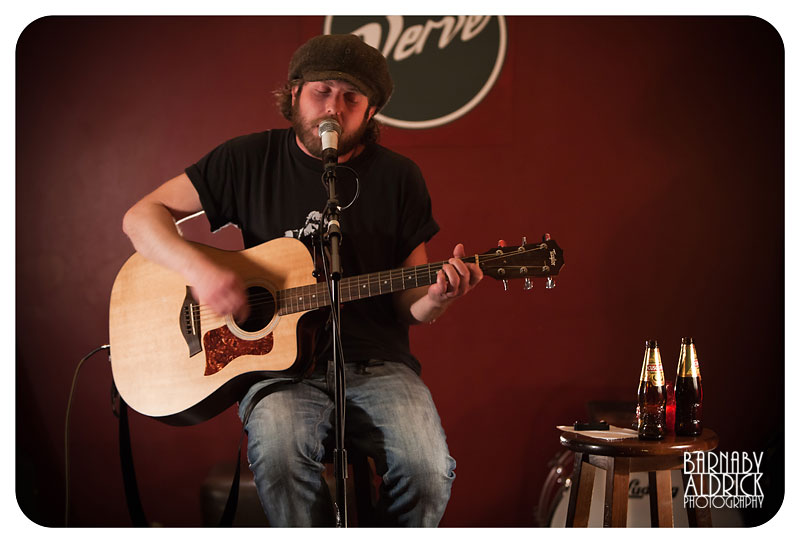 I liked how he lined up a stool for his beers, capo, candle & setlist. 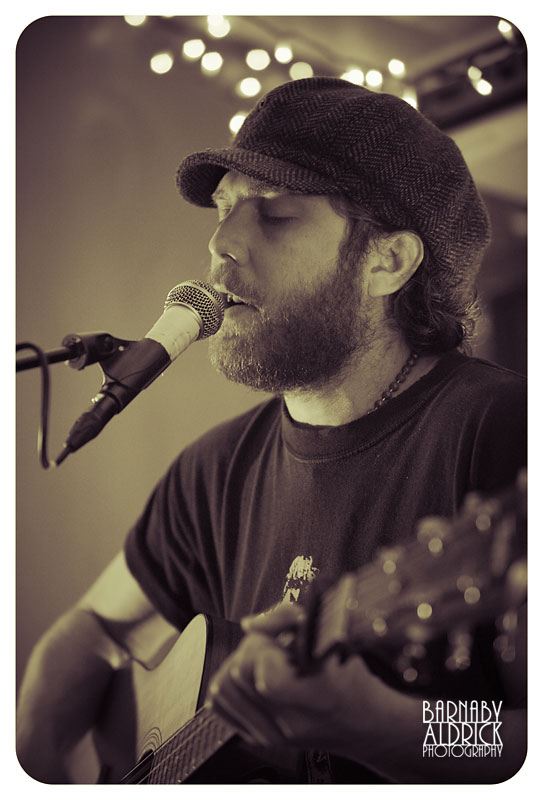 Bit of bronzie on the Boss 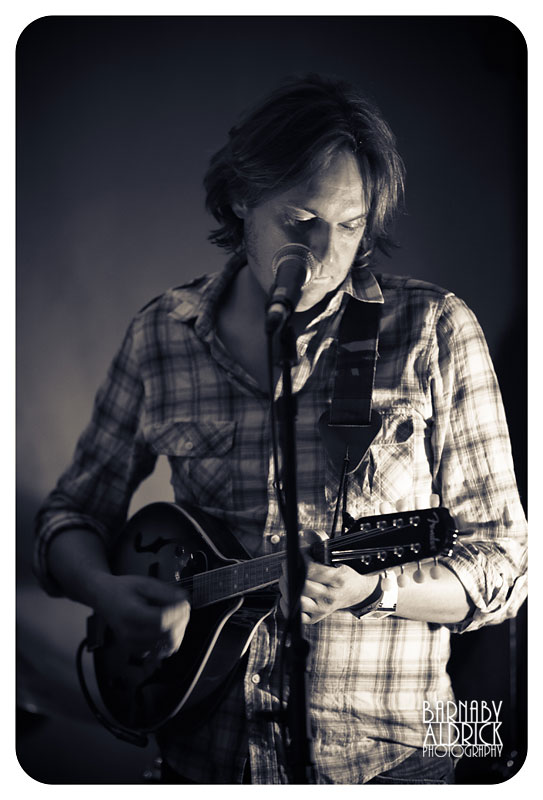 I generally like any band that brings along weird instruments. Mandolins, kazoos, cajons, ukelales… you name it. 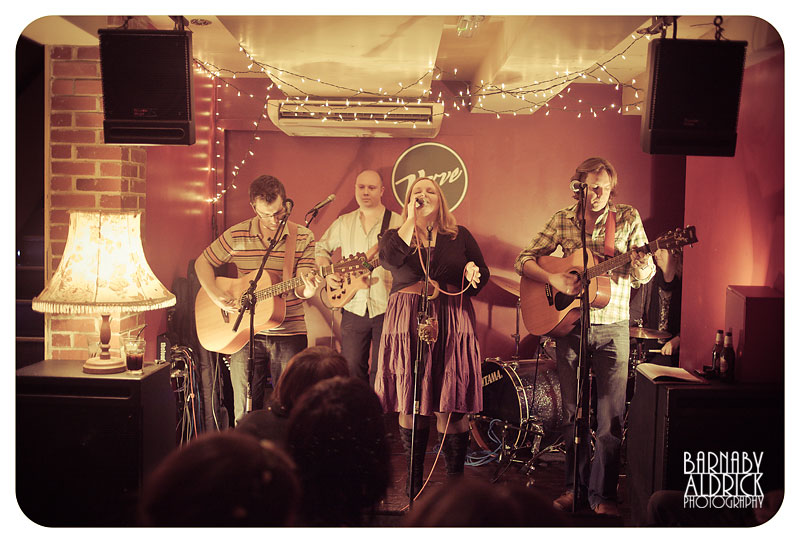 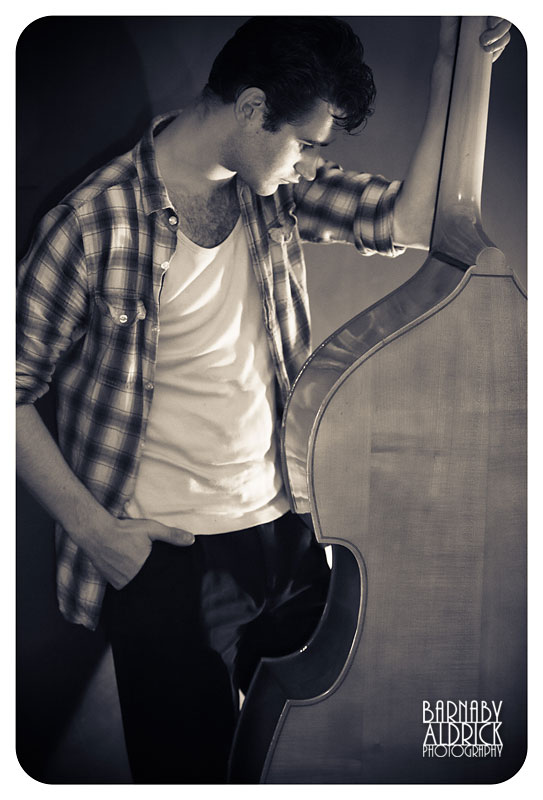 This is Adam – Leeds’ go-to skiffle bass mistro.  He must be in over 10 bands, has played down the SS possibly more than any other and is a legend. 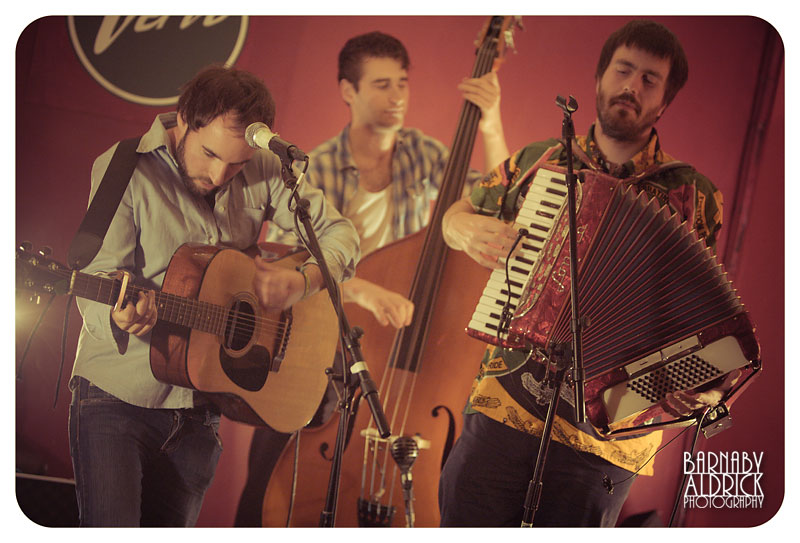 Gary’s again played the Sunday Service a bunch & runs his own night called the Gaslight Club at Oportos on Call Lane. 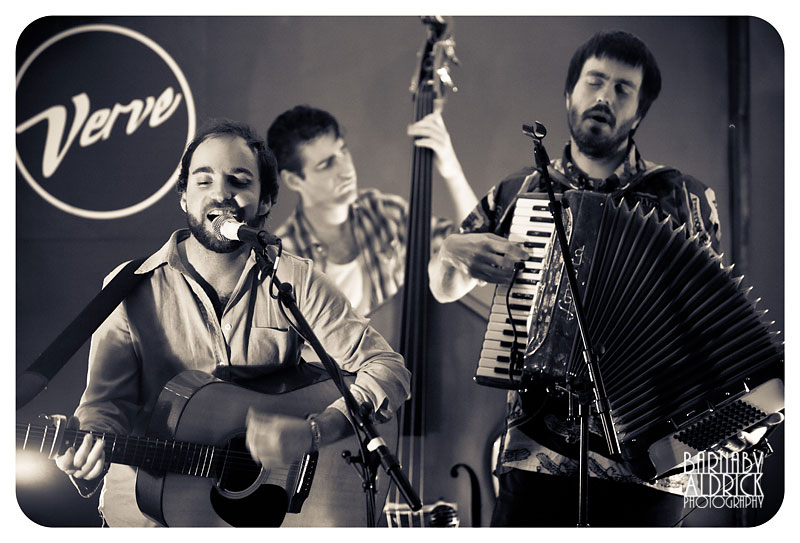 In my mind, it doesn’t get more Sunday Service than this. 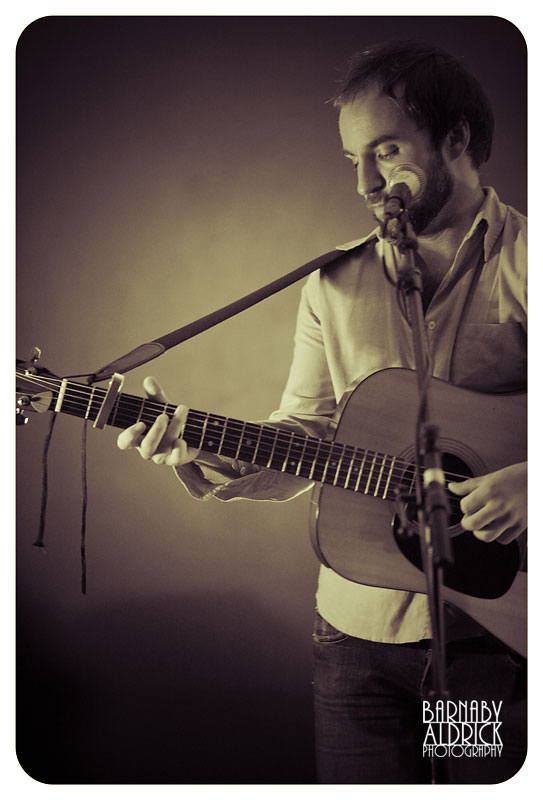 In a room I’ve shot a million times it’s always nice getting a new, clean composition 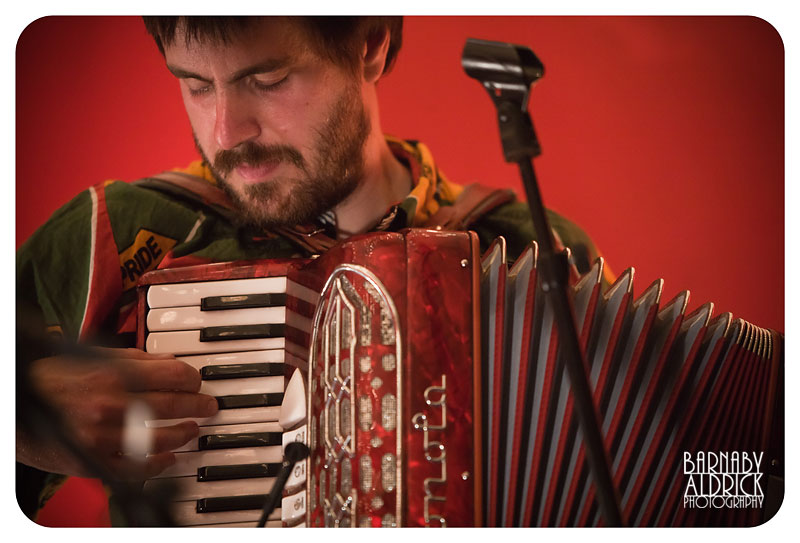 This is another I was pleased with. 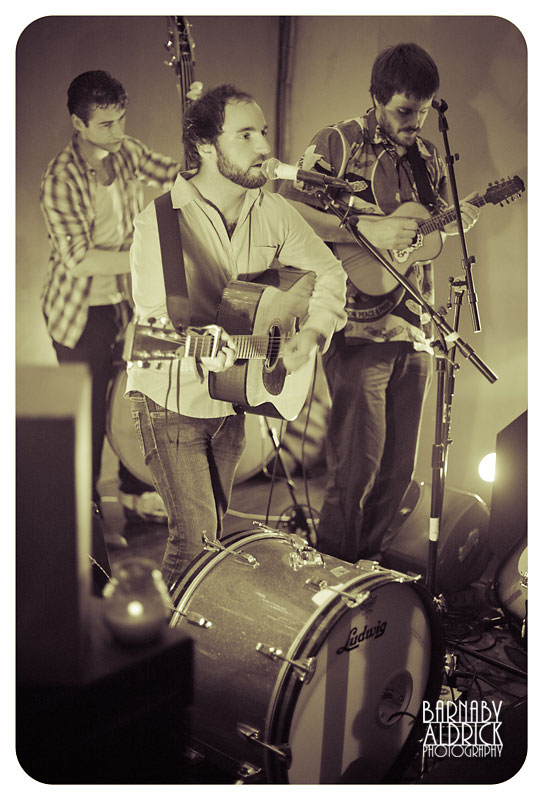 In fact, I liked the fact that Gary (who drums in Hope & Social) brought a kick drum with him to this gig to kick along to his tunes.

Anyhoos – Apologies that this has turned into a bit of an epic post!  We’ve some seriously sweet acts lined up for October’s Sunday Service (Dan Wilde,  Moonshine 5 & Chloe Levers) on the 31st October (Halloween!), so if you’re about, get involved.  Otherwise, click here to check our myspace or here to join the facebook group & hear about upcoming gigs.

Thanks for stopping by! You stay classy.

[ps. More blogs will be coming more regularly now readers, as I’m finally catching up with my workload!]