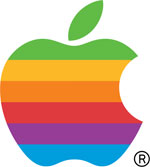 Like many creative professionals, I’m a bit of an overzealous Apple enthusiast.  Somehow I justify spending double what I could on technology that’s not necessarily ahead of the competition.  However, and as has been their way for a long time, Apple toys and gadgets still offer a cleaner, more stable and altogether smarter end user experience.  Plus, a bit like Branson’s Virgins, they’re not afraid to shake up the competition, rather than inching forward together.

I’ve been an iPhone user since the first gen iphone hit the market (that old fella above!), and like when the early iPod hit took the MP3 scene, the rest of the marketplace sat up and took notice.  My older bro like’s to remind me that back in those days, I was a bit anti iPod & Apple.  The reason was was because the smart companies reacted to Apples tidal wave by riding in on bigger, cheaper boards.  I remember Creative Zen & iRiver made hard disk MP3 players that had radio, the option to plug USB devices in & unload memory cards, video playback etc, while little old apple spent a while going ‘BUT I’M WHITE & PRETTY & HAVE A COOL WHEEL!’.

I could build my own state-of-the-art PCs, and yet 3 months later, the bells n’whistles had gone & it’d be chewing on nothing… a shadow of it’s former self.  All important data lived on separately partitioned hard disks for fear of a fatal C: drive crash & for ease of formatting when my superfly machine became old news. 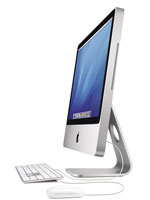 One day, after a significant crash & playing on a pals glassy new iMac, I hit the road for the AppleStore in Meadowhell and the 24″ iMac I came home changed everything.  Truely plug & play (plug a printer in & it’s there, ready to go! “Wot, no drivers? No CD installation or anything?”), rarely crashing & after a wee weening period, my work & play life was all calm & synced! Muy Tranquilo! An iMac, a MacBook, MacBook Pro & 2 iPhones later and I’m still still impressed at how it all just works.  I add a reminder or contact to my iPhone and *shazam* it’s there on all my other machines!

When you’ve a memory as bad as mine, this is truely a godsend.

Anyhoos – as a recovering tight-fisted Yorkshire man, I can honestly say that while expensive,Apple machines are worth the splash.

[Though I still think the iPad was a misstep that users are trying a bit hard to find a use for, when their laptop did so much more!]

So – to the belated point of this blog: iPhone apps!

In the wake of the iPod, a few contenders in the MP3 market sat up & competed; in a way that wasn’t just an attempt to create a cheaper, poor-man’s iPod.  Since the iPhone it appears that almost EVERY phone on the market has tried to be at least similar to an iPhone?  New, touch-screen, app-orientated, glassy black & silver nokia/HTC/Motorola/Samsung/LG anyone?  I’ve tested a few out of curiosity & leave most with “well the camera’s quite nice”. 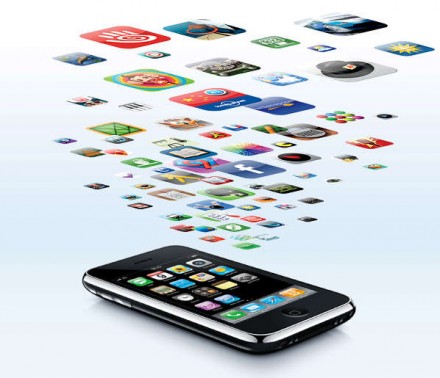 Really, my iPhone is the hub of my multimedia network, the bit that goes everywhere with me.  The way it’s built itself around Applications is genius.  It’s a pocket computer, and anyone in the world can design an application for it.  There’s an app for everything, and I think at the last count there are over 50,000 available apps (compared to Android’s 5,000 & Nokia’s 1,000).

But I’ve noticed that inspite of how cunning the appStore is, with it’s top 50 most popular lists etc, the best way to discover which apps are ace is by peeping at other peeps iPhones.  So as well as the classics (facebook, Spotify, eBay, Amazon) I thought I’d show you the ones some less famous apps that I rate…

So here goes, grouped onto one page & screendumped (done by holding the main button & clicking the on/off button) for your consideration: 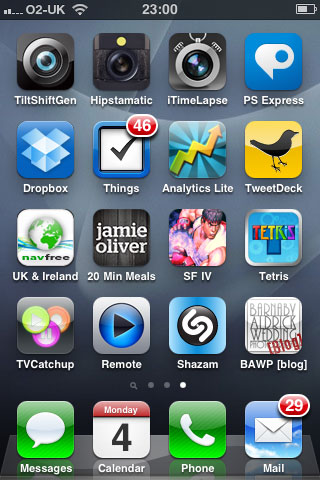 I won’t link them all in, as a simple appStore search brings them all up, but here’s the skinny:

1. Tilt-Shift Generator – The camera’s on all but the iPhone4 have been pants, but some apps really bring the 2mp iPhone images to life with a tilt-shift lens effect, like so: 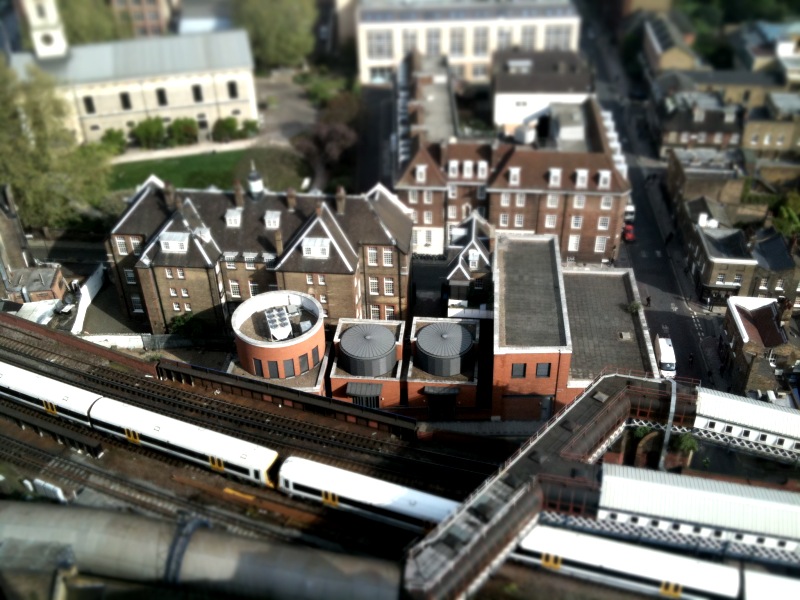 I’d love a couple of real tilt-shift lenses (and some wedding togs use them beautifully, such as the amazing Jonas Peterson), but they’re a bit tough to justify, so this cheeky little app makes do.  There’s a free taster app, but the real thing’s only 59p.

2. Hipstematic – making the new look old! This app, inspite of it’s constant crashing & idiosyncrasies, is ace fun.  Basically, it replicates a hand built plastic camera developed in the 1980’s by two art school dropouts that camera called the ‘Hipstematic’.  Wikipedia tells me each camera included a golden yellow shutter button which become a cult icon in 1983. By the end of 1984 the group had manufactured and sold 157 units. They then began working on setting up a production facility to take the camera to retail stores such as Woolworth’s and K-Mart. On June 22, 1984 the brothers signed a lease on a new building that was to become the company’s manufacturing plant. On the way back to their cabin they were struck by a drunk driver and killed and that was the end of The Hipstamatic.

Anyhoos – the plastic camera had interchangable lenses & flashes that gave very different effects, and the iphone app replicates this by letting you choose the lens, film & flash type to create different effects.  This was one of mine from paris: 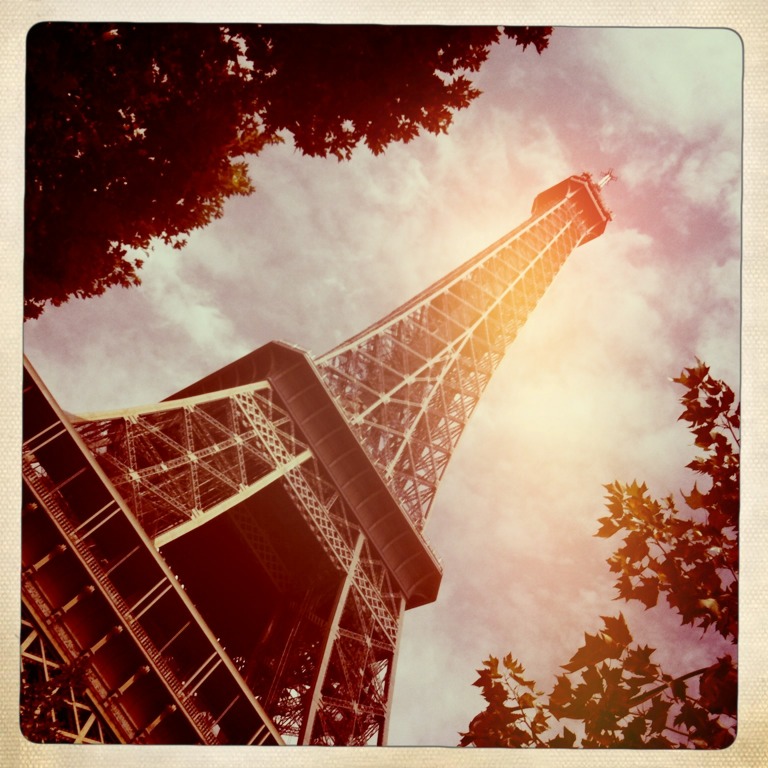 Plus my fave feature of it is that you can choose a classic viewfinder that renders the viewfinder inaccurate and basically recrops your composition however it feels, leading to random interesting views.

Hipstematic is £1.19, but you can drill a bit more on fun new lens/film/flash packs

3. iTimelapse – I’ve not used this much, but it basically turns your iPhone into a timelapse camera.  You can leave the iPhone charging on a windowsil and set the shutter duration to film tomorrows sunrise!  Below is a timelapse Phil Barber filmed of a sunset in Italy.

5. Dropbox – A very useful free application that creates a folder that syncs it’s contents to a matching folder on your other machines.  The iPhone app allows you to view files (including PDFs & videos) on the road.

6. Things – my To-Do software of choice!  Again, synced between my machines & iPhone, it tells (reminds?) me where I’m up to with each client and allows me to schedule in jobs into my calendar.  I think it’s a few quid, but the mac app costs £40 or summut.

7. Analytics Lite – a free app that taps google analytics and allows me to keep track of activity on my respective sites and most importantly my dear blog followers!  That’s right – I’m stalking you too.

8. Tweetdeck – I’m not 100% sold on Twitter, as it still feels like a stipped back facebook, but use it as a signpost for new blogs & photo related thoughts, but TweetDeck is probably the best Twitter interface I’ve tried.  The columns and ability to tweet to selective facebook pages are especially cool features.  It’s also free.

9. NavFree – the reason for this blog really, as only yesterday I heard about the world first free iPhone GPS turn-by-turn satNav option; tapping into OpenStreetMap (OSM) free mapping system.  I downloaded the free UK & Ireland version and road tested it to meet a client in York (TomTom was on hand just incase!), and it worked perfectly. 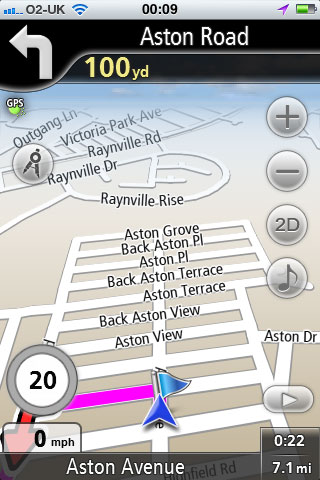 Not only did it do the same as TomTom (Turn-by-Turn / voice guidance / auto-rerouting / 2D & 3D view / day & night colours), but it has a google search feature, lets you play tunes from your iPod.  But all the more importantly, it was it quicker to pick up the route than SatNav (which can faff about for longer than you need hunting for a satellite) and I even prefer the interface!  The annoyance of a TomTom is getting it out and sticking it to the screen etc, so I was toying with buying the £40 TomTom or £20 co-pilot apps, and this free fella rolls in?

As I said – iPhones rule! Can’t sniff at free satNav can you?  Give it a go.

10. Jamie Oliver’s 20 Minute meals – whatever you think of mr Oliver and his oversized tongue, this app has some seriously cool features. 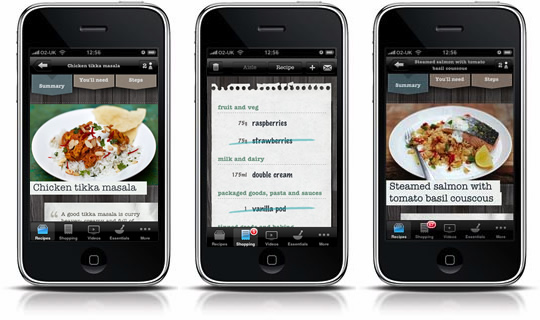 Not only are the selection of recipes great (and recipes can be doubled for 2/4 persons), but you can watch loads of Jamie’s instructional videos (sharpening your knife skills/learning how to spot fresh fish/store cupboard basics etc), read step by step instructions (with videos & great photography) & add recipes to a shopping list that can sort by recipe or your whole shopping list by supermarket aisle (genius!).

11. Street Fighter IV – If you ever enjoyed street fighter at the arcades, this is ace. 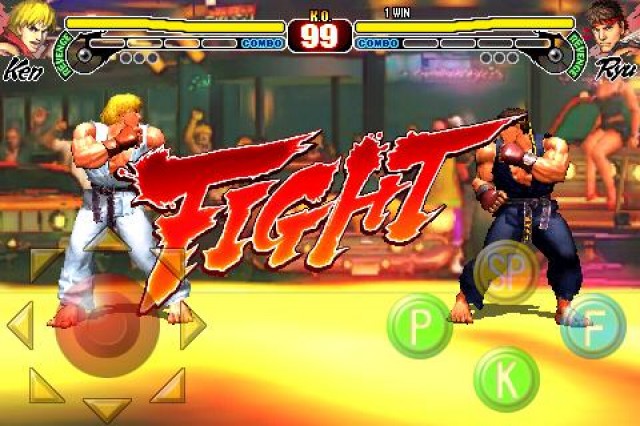 12. Tetris – You know the story.  A faithful, fast & fun conversion of a class for the iPhone, with a few new tweaks. 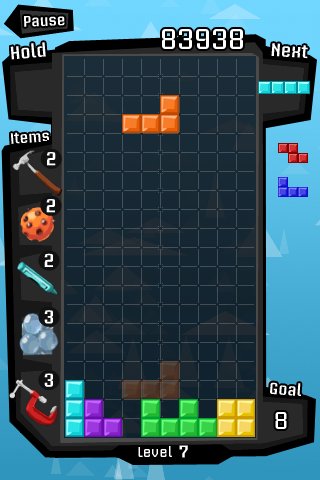 13. TV Catchup – Watch load of live TV, going out now via wifi.  Instead of an actual app, TV catchup is a weblink you can save as a bookmark on your desktop. Click it and it launches a page to choose the channel you’d like to watch: 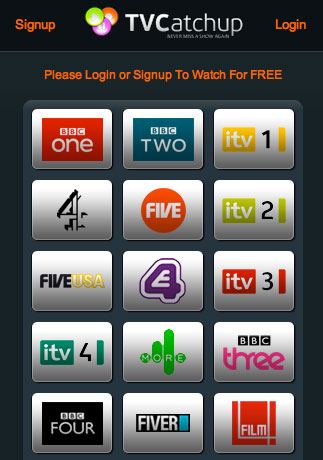 There are more than that too.  I believe it’s free to register, and is great for watching film 4 on the train.

14. Remote – if you’ve an iphone and your music is playing from another computer via iTunes, the remote can connect to it via Wifi to change the track/line up playlists & adjust the volume.

15. Shazam – can’t remember what that song is?  Wanna know who’s playing?  Shazam takes a 10second snip of what it hears through your iphone and comes back with the artist/track/release date & a link to itunes.  Ideal for a pub quiz.

16. BAWP Blog – Too exclusive for the AppStore! You can bookmark regularly visited sites on your desktop & treat them like apps, ready to check out whenever you please. I hear this one is good…

I’ve made a glassy icon (for you personally), so it’d be rude if you didn’t bookmarked me!

Finally – one last tip, and a nice feature of the iPhone 4 Operating System is the foldering system.  Instead of 10 unwieldy pages of apps, you can click and hold an app till it’s shakey, then drag it onto a similar app (say one photo app onto another) and it creates a folder, in which you add up to 12 apps).  I’ve organised mine as follows, and you can be as efficient as you like: 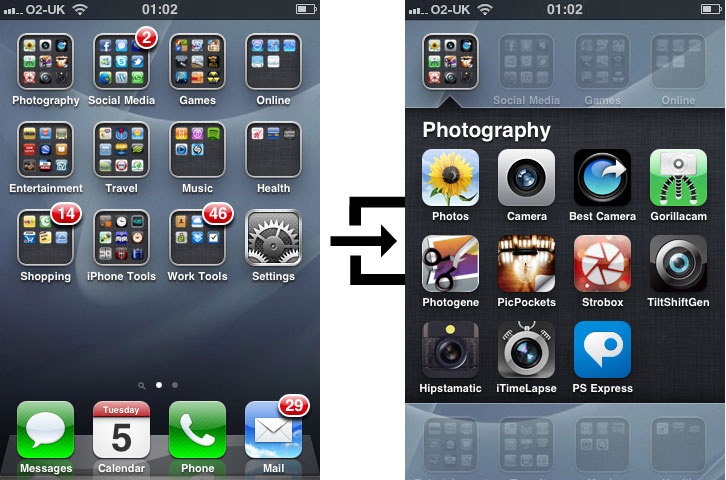 So I hope you found that informative.  As usual, the blog went a bit epic on me, but there we are.

Catch y’all again soon.  Got some fun pics to share this week.