Last Friday night I popped into Leeds to catch a couple of good friends of ours play a gig at Verve Bar in Leeds city centre.

When I got there I remembered I’d recently supplied them with a stack of music images I’d captured down at the Sunday Service night I run there occasionally, and they’d printed them up and put them on the walls of the bar upstairs.

It’s always good to see actual images in print.  On a screen they look lovely, but sharpened for print and put behind glass is a bit magic.

Here’s the beautiful ODi, who was playing at Verve that night, while also hanging on the wall upstairs.

Once upon a time, I played bass for ODi, with my good pals Claire & Dare.  Though their spiritual home is Leeds, they now reside in Ireland.

But this makes homecoming gigs all the more special.

With them in support was the amazing Mr Dan Wilde, also gracing the walls.

Dan’s written some brilliant new songs recently and I’ll hopefully be shooting a music vid with him after the Summer wedding season. 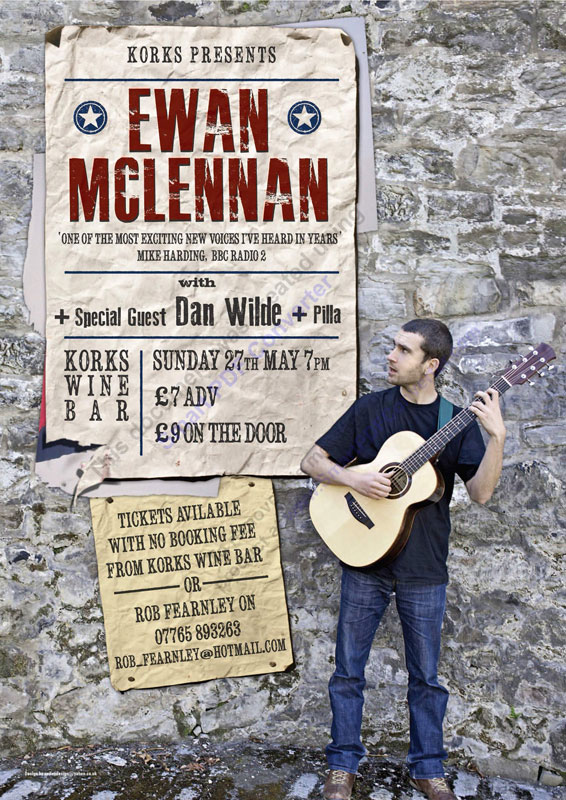 Coincidentally – and using this op for a shameless Sunday Service plug – Dan Wilde & the excellent Pilla are supporting local legend Ewan Mclennan at Korks Wine Bar in Otley on Sunday 27th May in association with the Sunday Service.

If you like good music, good ales and a change of scenary, get it in thee calendar.  Deets and digits can be found on the Facebook event here.

Leeds is bursting with brilliant musical talent.  Ben Pike has laid his bluesy gravel atop his’lap slide’ guitar for us a whole bunch of times.

Another image I liked, of Gerait John Jones.

Another outfit rocking the lap slide, but from a significantly more folky, fiddly angle are Jamie Roberts and Katriona Gilmore.

These guys have played the Sunday Service a good few times and their latest album sports a song called Fleetwood Fair that as to be heard to be believed (check out the insane skills on the official music vid for it here).

I also did a photoshoot with K&J at the Adelphi pub in Leeds a few months back, and although I’m itching to, I promised I wouldn’t blog it till they release them in July!

This image to me is Sunday Service all over:

Firstly, any band with a Uke is good with me.

The granny lamp lives at my house and has been dragged to every Sunday Service since we started back in 2007.

The box is an old church collection box I bought on eBay.  It’s always been a ‘free’ night; though the bar pays the acts with beer, I pay the acts with photos and if the crowds enjoy the tunes, they pay them when we pass the collection box round.  Can’t say fairer than that eh?

One of the nice things about the night – as opposed to going to other gigs and photographing acts at random bars, clubs and venues – is that I can light it for photography.  So supplementing the granny lamp are usually a host of hidden cheapy 60w desk lamps, to fill, rim and key my acts, such as this one of LeeSun Clarke

You can see a few of the ninja lights hidden about the place on this shot of Wilful Missing!

Thinking about it, I recon these guys’d make a brilliant wedding band.  If you want their contact deets, they’ve not got an online presence yet, but drop me a message in some shape or form & I’ll hook y’all up.

We’ve been lucky enough to have some quite high profile acts play, including a brilliant performance from ‘Testament’ of Homecut on First Word Records.  He’s a song writer and beatboxer who used loop station jiggery magic to build some crazy songs for us.

Another legend who graced and now graces the walls is the prolific Mark Geary.

This Irish singer songwriter is of an ilk akin to Damien Rice & Glen Hansard (of Swell Season & ‘Once’ Soundtrack fame) and is also a cracking fella who loves the craig & a good curry.

I’ve listened to his albums ‘Ghosts’, ‘Opium’ & ’33 1/3 Grand Street’ inside out, and his latest offering ‘Songs about Love, Songs about Leaving’ is growing with each listen.  Download links can be found here, and you won’t regret buying any of them.

The album, not the drug.  Arf arf.

Another legend we’ve been lucky enough to have play a good few times is Nick Mulvey.  This chap founded the Mercury Nominated Jazz hang & alto sax outfit ‘Portico Quartet’, but has since left to follow his true; mashing together African-influenced classical guitar with London-vibed storytelling.

If anything is fair in the world, this already respected and gifted gent will find the right break on which to surf into the mainstream.

Once upon a time we had Leeds-born (former school pals of mine) indie-electronica outfit Stateless, play a rare acoustic set for us before they migrated to London.

An image I like of one of Leeds’ movers and shakers, James Owen Fender

These guys, Fawn, squeezed a good few heads onto stage for us.

Chloe Leavers and her band kindly travelled all the way from Wales to play for us!

The Bruno Merz Band made a particularly fine sound

Silky, a Leeds-based comic who runs night (of stand-up comedy) at Verve Bar, is also an excellent singer songwriter and played a set for us.

Here’s one of the legend that is Rich Huxley of Leeds based music scoundrels Hope & Social.

I believe these are Rich’s feet from another time they played for us.

I pretty much always photograph the shoes of the acts that play, and one day should probably compile a book of match the shoes to the band…

Love this shot of the March of Dimes.

Leeds’ Spam king and all round grafter, Gary Stewart (who coincidentally has a new album launch at the Brudenell tonight that I’m off to pap!)

I’m expecting big things from former college of music maestro Paul Thomas Saunders, who’s recently been signed and has had a cool vid shot by the lads at The Blind Club.

I liked this snap of one of our acts set lists

All three of these chaps are in their own bands, but came together to create a new sound.

Two very good friends of mine, who’ve possibly played the most Sunday Services ever are the very excellent Richy Bower AKA: Palooka…

and Dave ‘Pilla‘ Rees – who writes some of the finest, urban woeful tales I ever have heard.

And he has a Ukulele.

This image was another spot I saw in the image above of Dave playing his set, and also is a great closing image that says Sunday Service to me. I was lucky enough to be asked by him to use it on his EP (which is both amazing and available to download from iTunes here)

So I hope you’ve enjoyed seeing a few (read: LOADS OF) highlights I’ve caught at the Sunday Service over past years.  Seeing the images in print on the walls of Verve really reminded me how many ace acts we’ve had play over the years and how much fun it’s been running and comparing the night.

After the wedding season settles out a bit, I’ll be getting back into the swing of organising more monthly Sunday Service gigs.  So if you’re interested in hearing about upcoming gigs & are a facebooker, join the group here and you’ll be the first to hear of upcoming gigs.

Otherwise, hopefully see some of you on Sunday 27th for Ewan Mclennon, Dan Wilde & Dave Pilla in Otley!