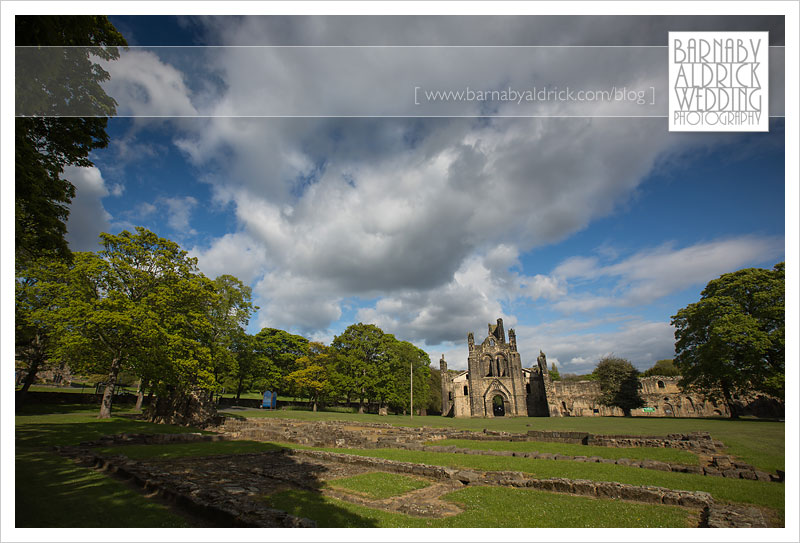 Earlier this week, I headed to the beautiful Kirkstall Abbey in Leeds to join… 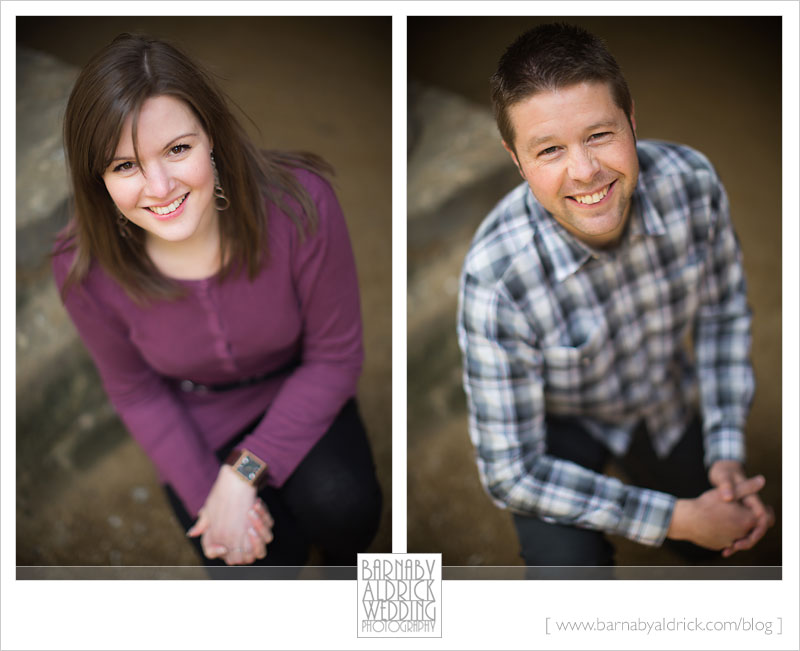 …Hannah & James for their pre-wedding shoot! 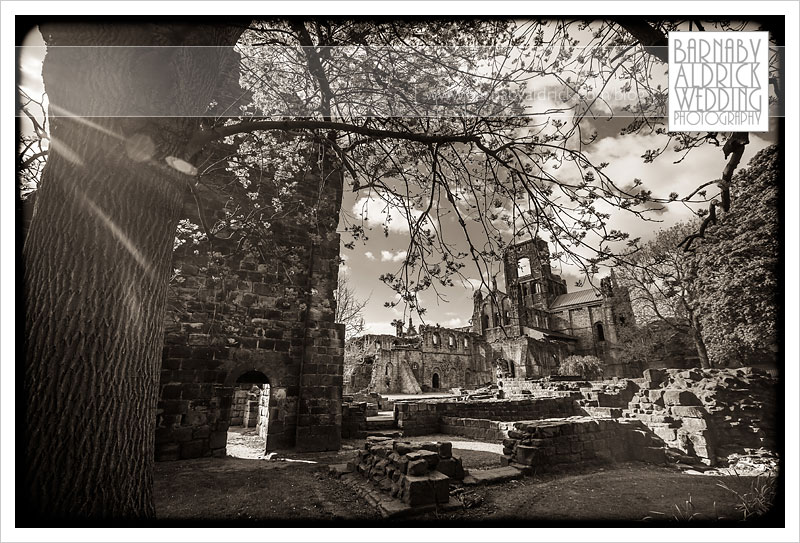 We’d met last week to talk through their big day game plan at St Stephen’s in Kirkstrall and The Headingley Stadium, and today we were blessed with beautiful sunshine & the deserted grounds of the Abbey to play in! 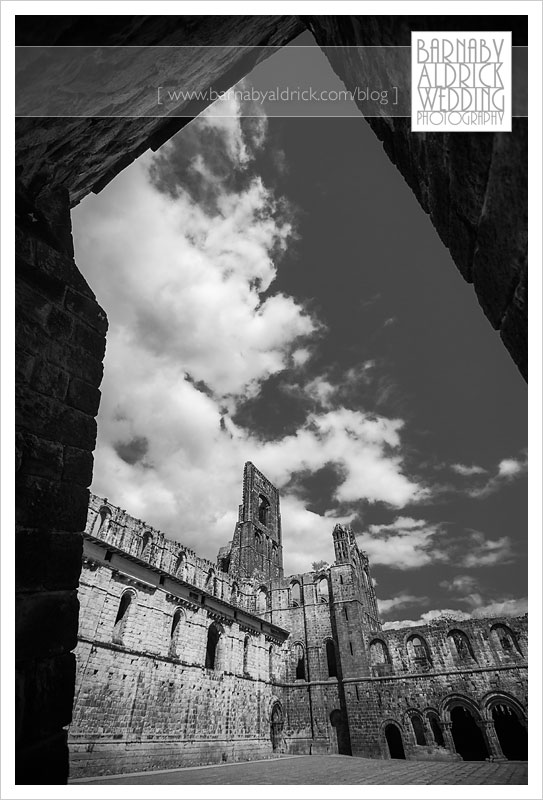 I love Kirkstall Abbey.  There’s so much of it left standing, and a stunning gothic backdrop against which to shoot.

When Henry the 8th threw a paddy that he couldn’t get a divorce and made Catholicism treasonous, he severed ties with Rome & sent his boys to ‘dissolve’ the powerful Abbeys and Monasteries.  Some of them got proper knocked out, like Roche Abbey in Rochdale, which has literally just one wall remaining.  But I like to think of the Kirkstall Abbey ‘dissolution’ mob being a bit lazy, and just smashed the roof & a few walls in, then called Henry & said “Yeah all done here, boss… what’s that?  No, no need to come check.”

My history is a little sketchy, but I’m pretty sure that’s how it went. 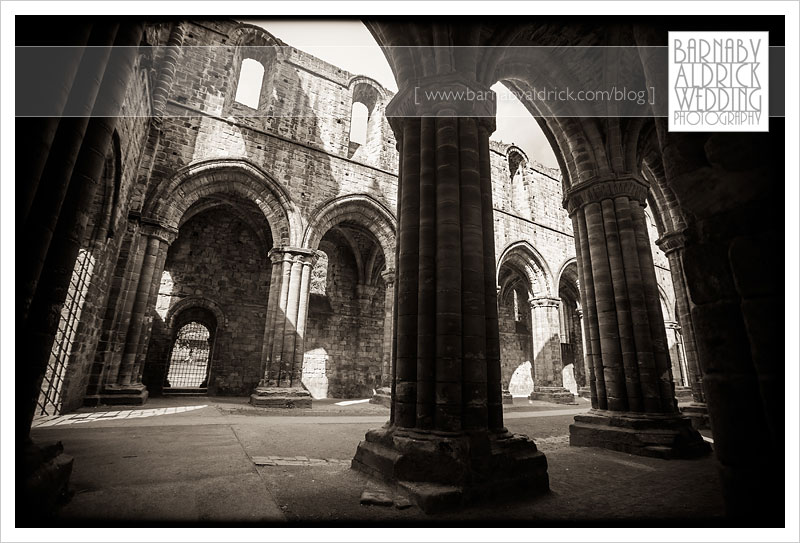 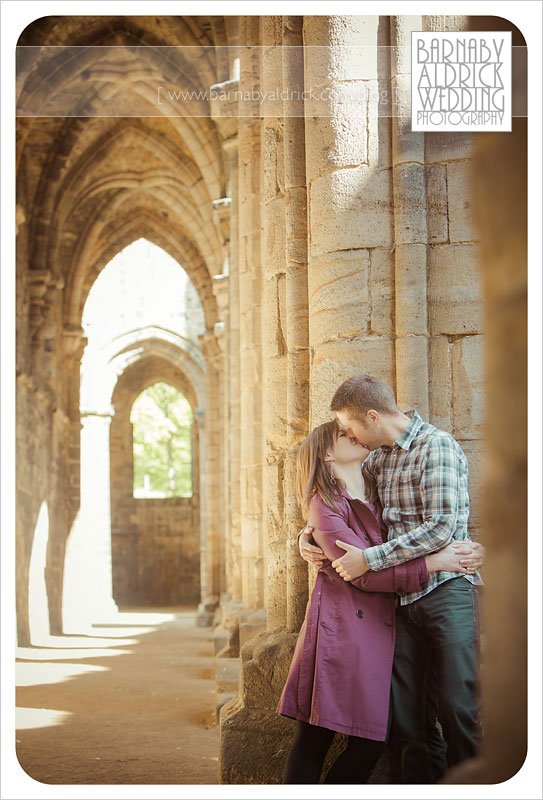 …with plenty of hiding places to take a smooch! 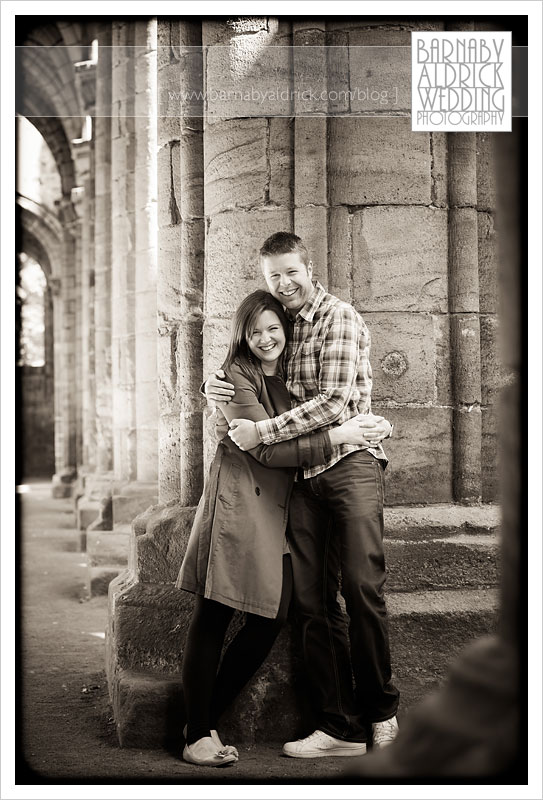 We were unfortunately a bit time limited inside, as the Abbey were short staffed and had decided to close an hour early, so we dived straight in 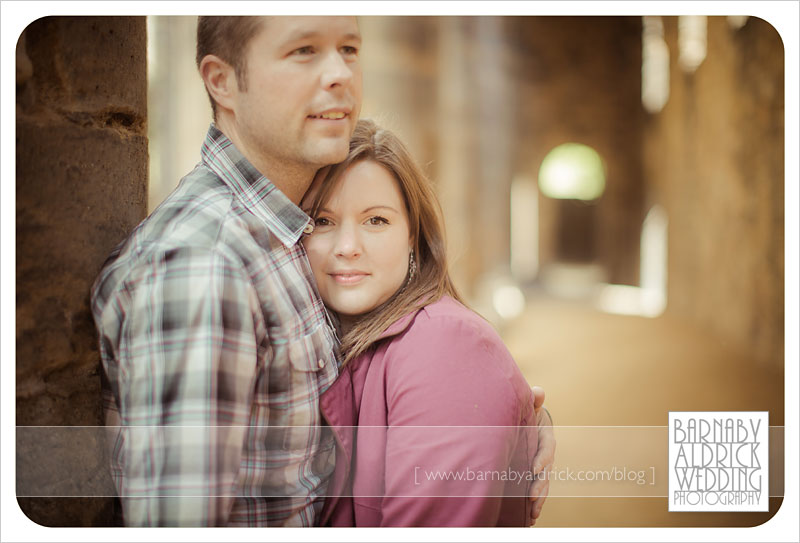 I like to show my upcoming wedding couples how it feels to be in front of the camera.

Generally it’s super weird to begin with – and it’s often like it’s the first time couple’s realise they’ve got hands and don’t know what to do with them – but after about 10 minutes, they settle into it and it becomes fun! 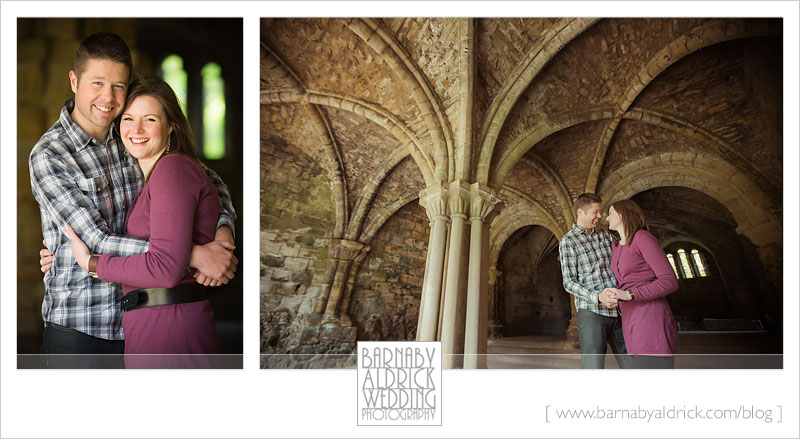 Hannah & James have paid to have an hour in the Abbey on the day of their wedding, for a sneaky portrait shoot, before heading to Headingley Cricket & Rugby stadium (where James works) for their afternoon reception.

It’s gonna be mint photographing at the Abbey on their big day, with them all togged up in their wedding threads!

We loved this vaulted ceiling in the Chapter House off the Cloister (I’ve got a map!) and it’ll serve as a good option if there’s inclement in the air! 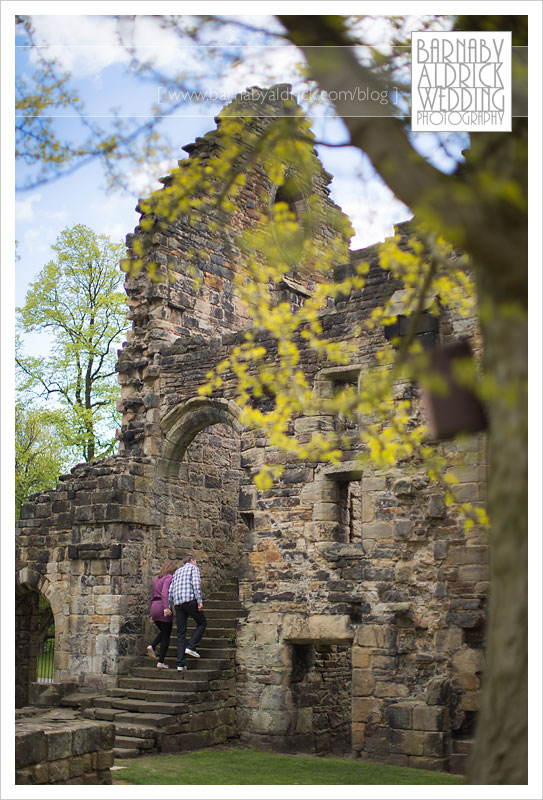 I also find pre-wedding shoots a great opportunity to nosey around for new places to shoot, even if I’ve been there before. 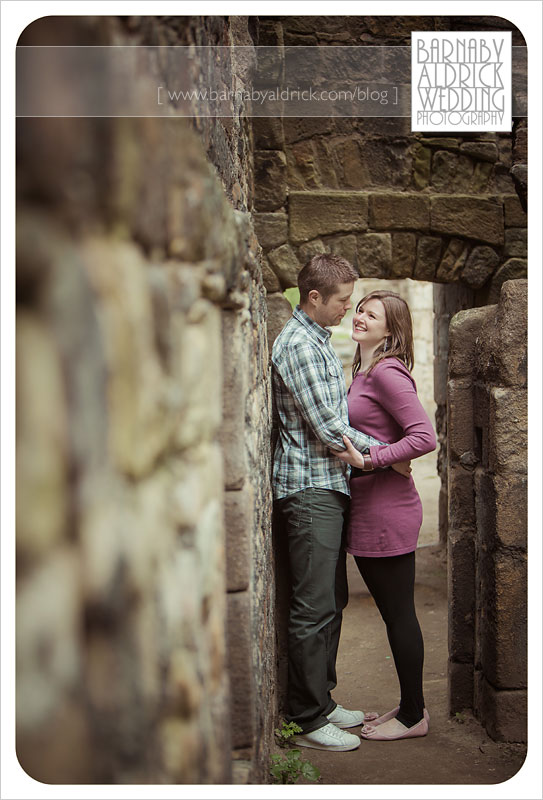 You discover all sorts of hidden spots. 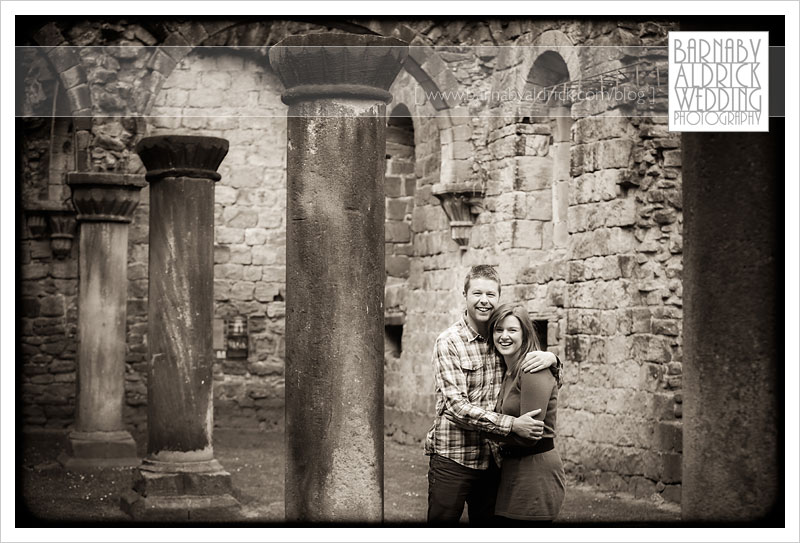 The free-standing pillars in this room, on the way out to the old 13th Century infirmary, made for a cool place to have a cuddle. 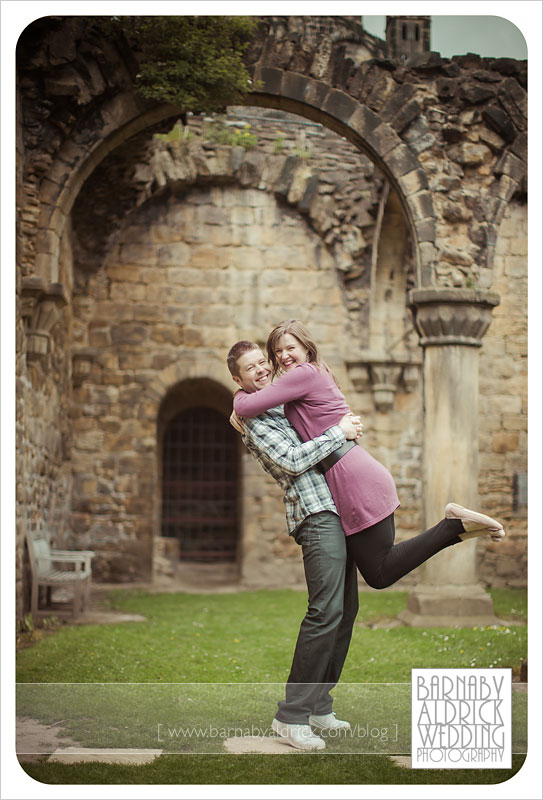 Arches are good frames; made all the better when you’ve a fun couple game for messing about in em! 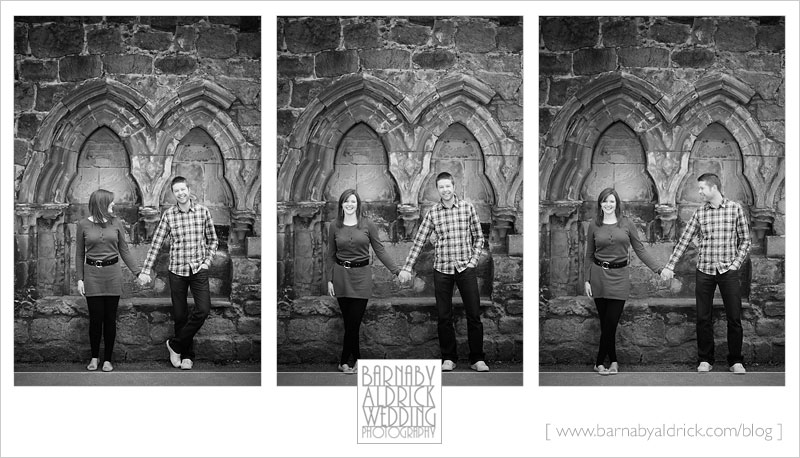 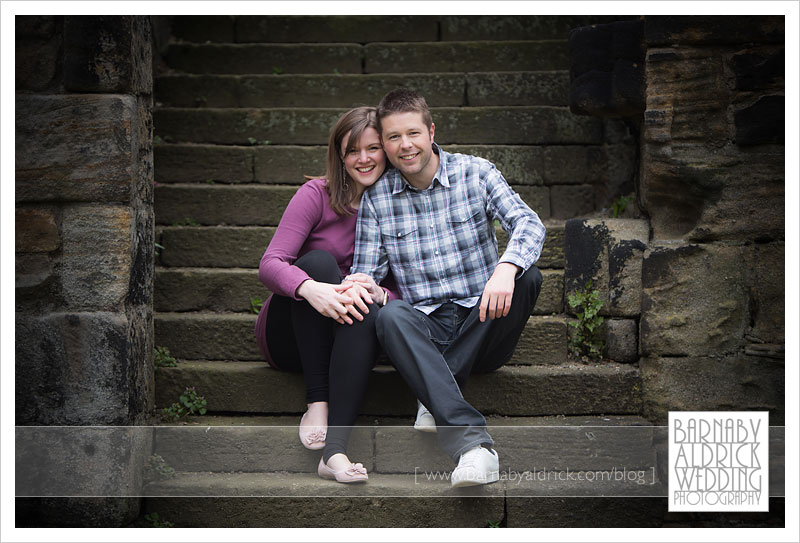 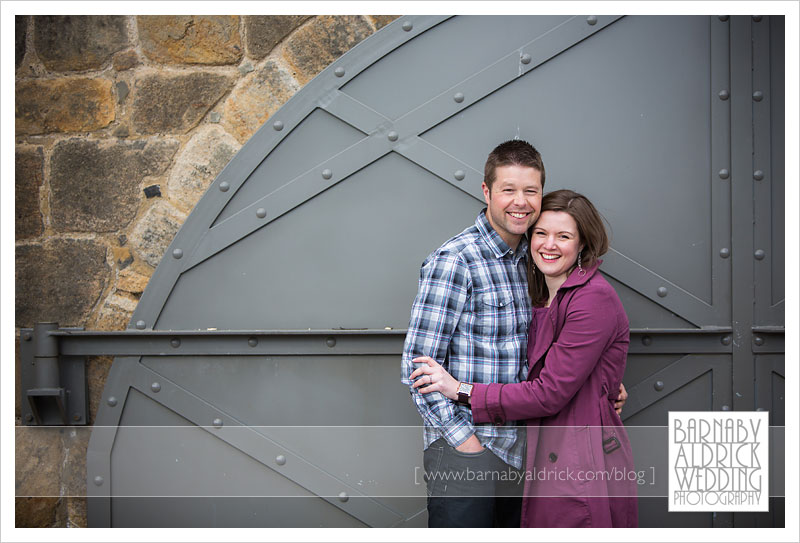 As we were shuffled out of the Abbey I spotted this massive grey, riveted door I rather liked. 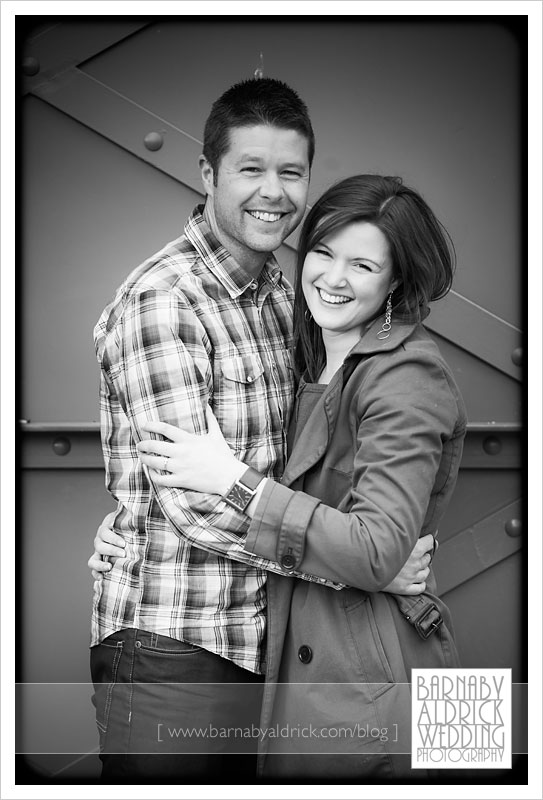 These two were very easy to photograph! 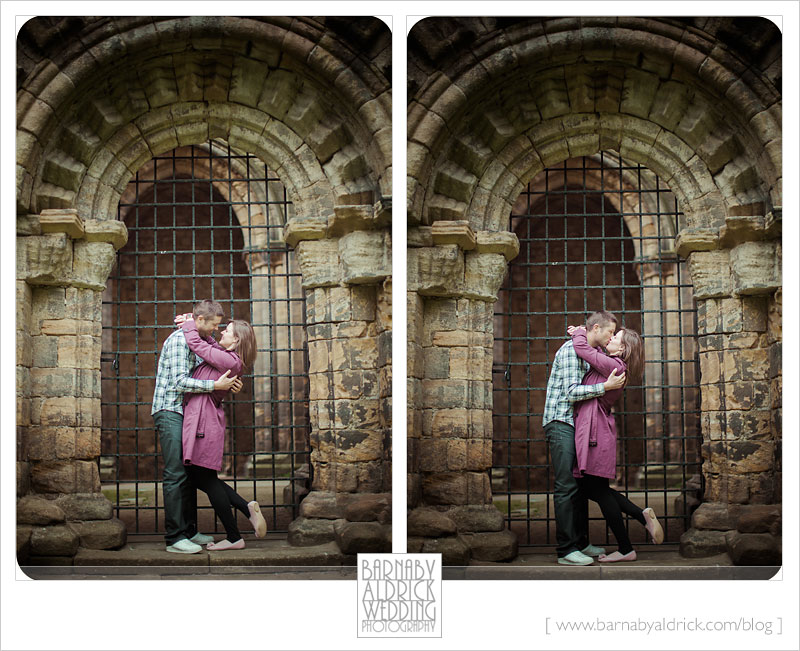 Hannah’s another bride who’s admitted to being a bit ‘obsessed’ with this blog and has been looking forward to starring on it! 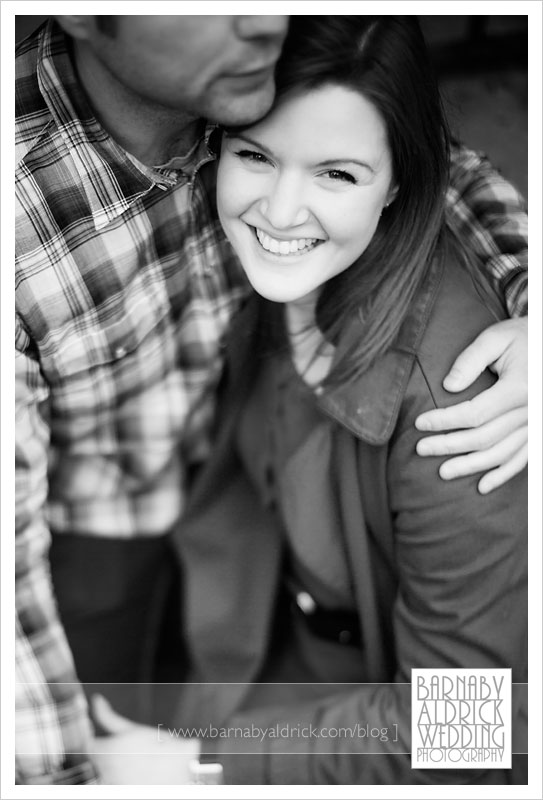 It’s great when couples are as relaxed with each other as these two, but it’s even better when they’ve followed my wedding & pre-wedding work on the blog!  It gets them excited about being photographed.

After leaving the Abbey, we explored the grounds around it, which are open to the public and I often go down with my pooch for a stroll 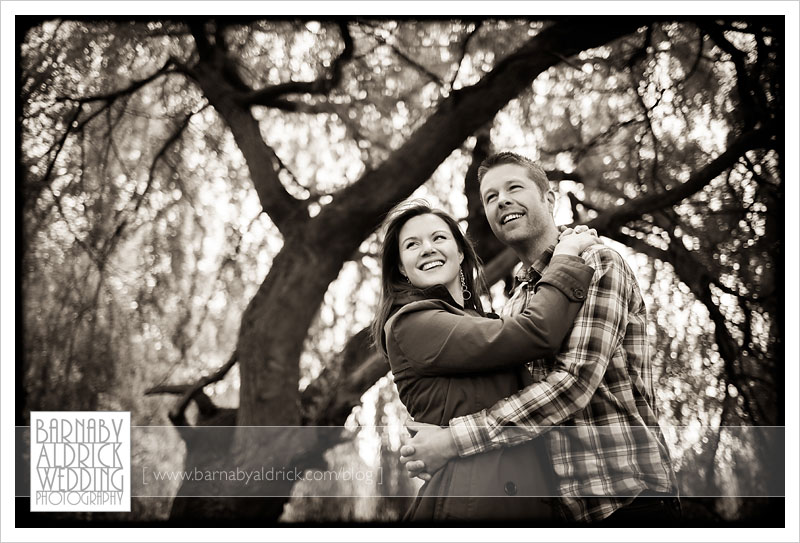 I really like this one by the river Aire, under a weeping willow, working catalogue stares into the middle-distance! 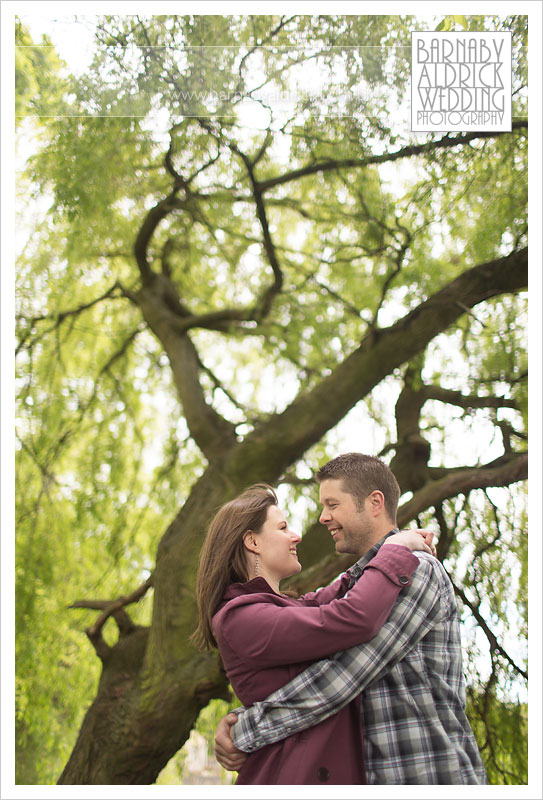 I love how this image, caught on my 35mm lens at f1.4, has Hannah & James, a pin sharp in front of a lovely soft tree!   It’s all about the ‘bokeh‘ on the 50 & 35mm lenses.  Especially since I’ve bought the latest Canon 5DmkIII camera body, which more reliably locks on focus while shooting ‘wide open’ (ie. with lenses set to their maximum aperture).

I’ve been really impressed with the mkIII, and early next week will write a super geeky blog on my feelings on it, having used it at a wedding, pre-weddings & a dingy gig. 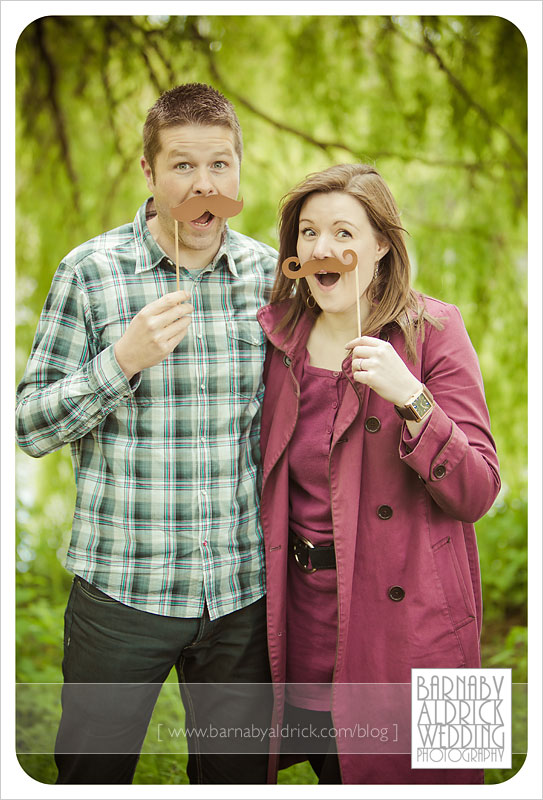 We’re running the photobooth I offer at their wedding, and when I met these guys last week Hannah mentioned how she really liked the moustache on stick props she’d seen Chris & Chantelle’s wedding blog here.

So onto eBay I went and now I’ve loads of props on sticks and took two moustaches along to show them! 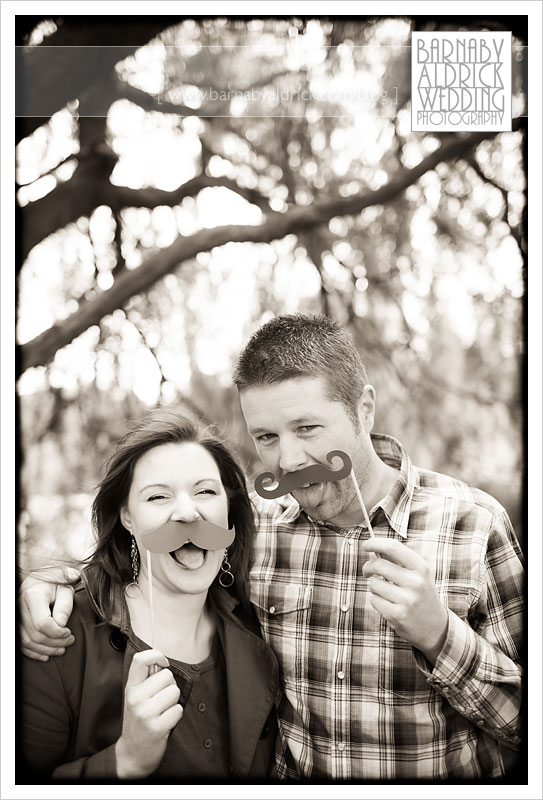 So it seemed wrong not to test ’em out! 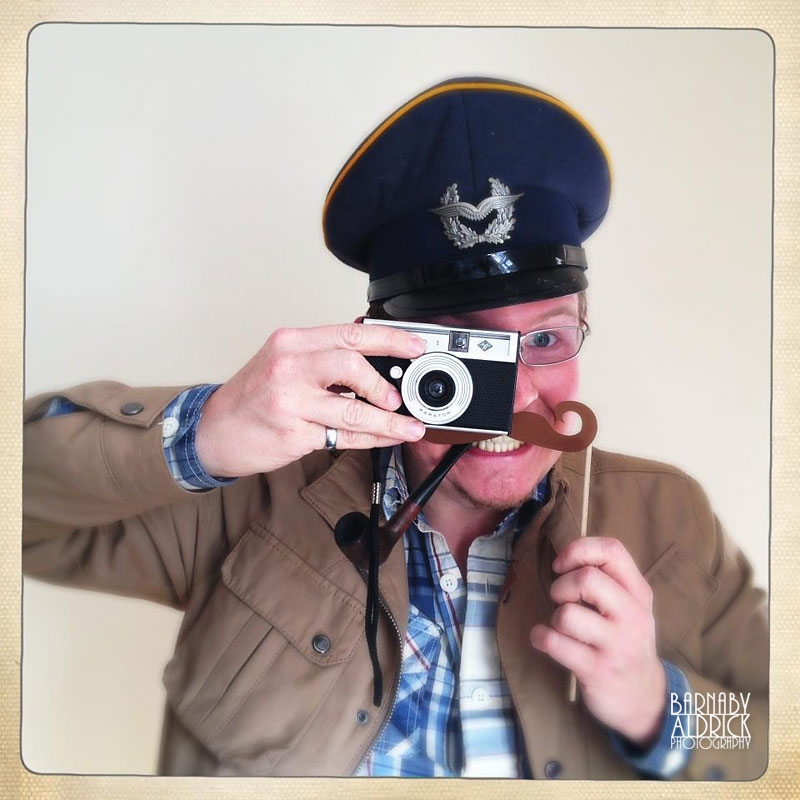 I’ve been getting a bit carried away buying photobooth props recently, to pop in a vintage paddington bear style suitcase! 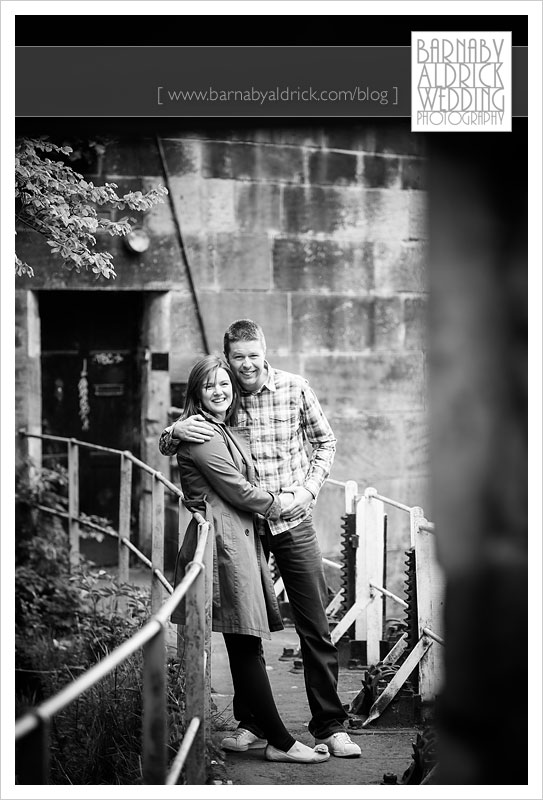 Anyhoos – back to the shoot!

There’s a cool weir at the Abbey with a curved walkway over a set of lock gates to a mysterious old cottage, that makes a fun spot for a portrait. 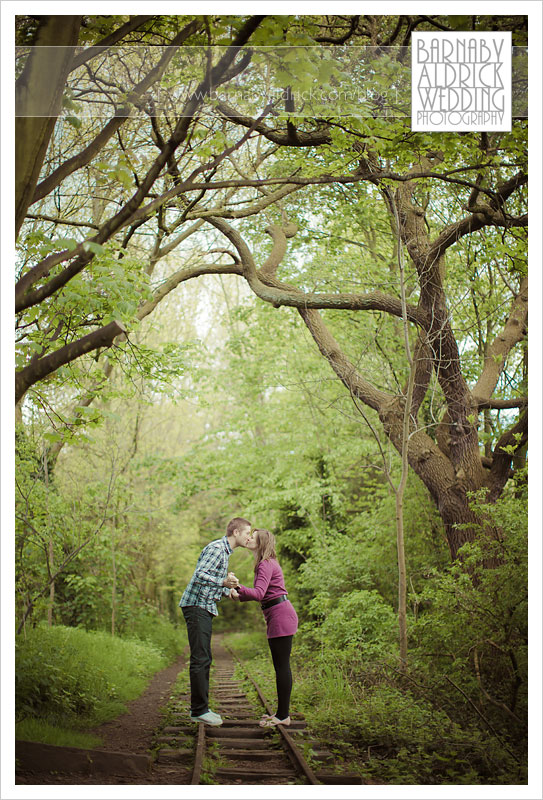 There’s also an old miniature railway line that runs through the grounds of the Abbey! 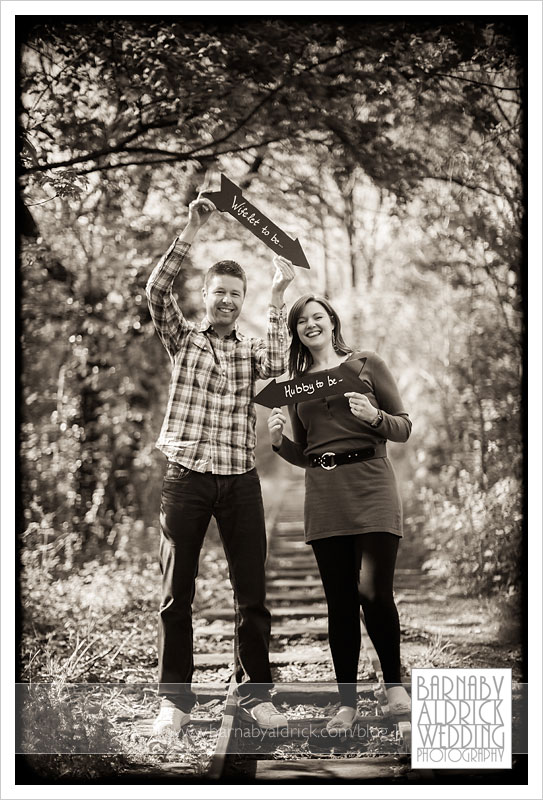 Hannah had also seen some ideas on a pre-wed ideas board on my pinterest page using chalkboards, so she brought these guys along!

I love that James says Hannah’s going to become his ‘wifelet’! 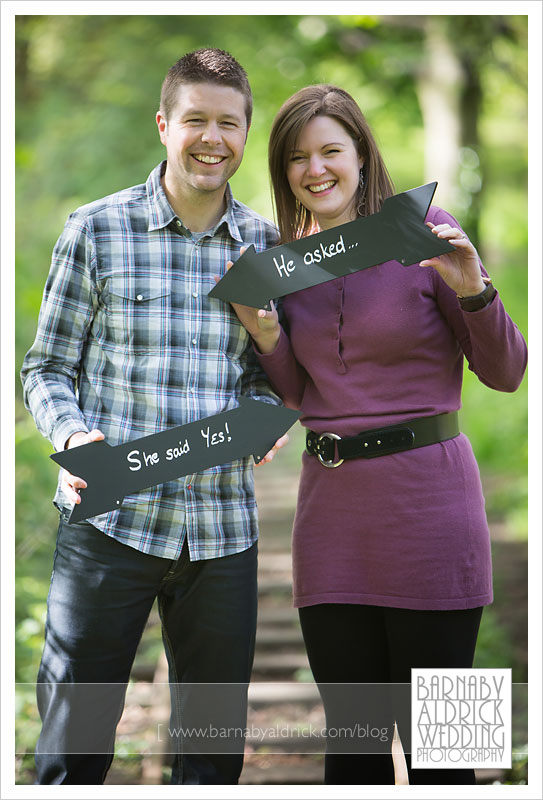 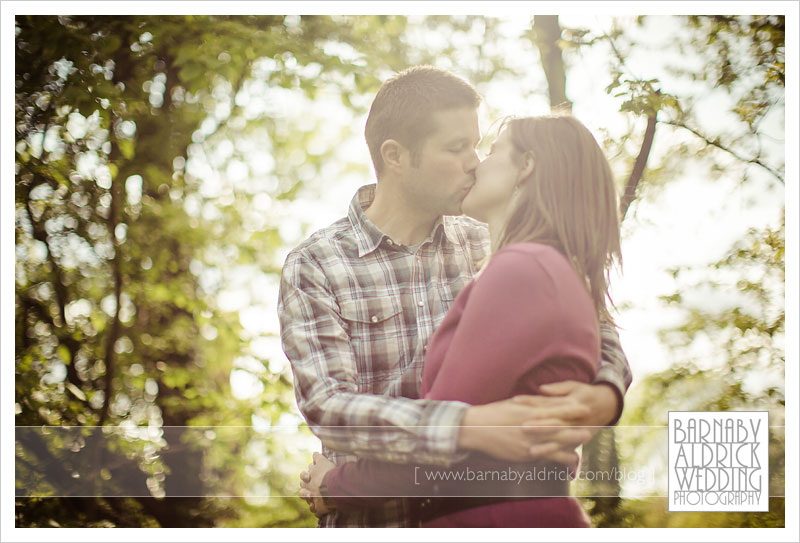 Just at the end of the shoot, the sun came back out and backlit this kiss beautifully! 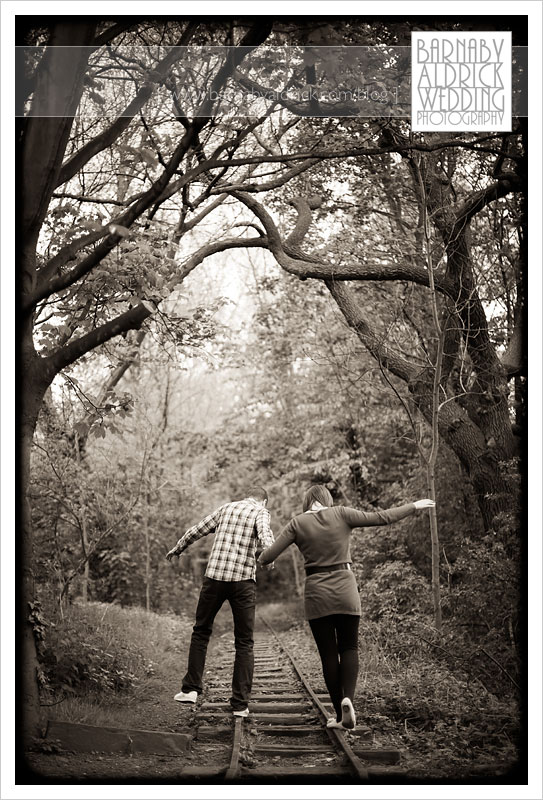 Apart from being a bit rushed inside the Abbey, this was one of the coolest pre-wed shoots I’ve done in ages!

It was great to see how relaxed these two are in front of the camera, and I can’t wait to do another round of snaps at the Abbey in June!