What are your feelings on Twitter? Here are my thoughts and an introduction for the uninitiated…

I remember when myspace came out, the world shrunk that little bit more and new walls fell.  Suddenly you could be friends with Radiohead, write them a message and have Thom Yorke reply to you personally.  Without managing to sound too flowery, for a while (and still with some bands) technology allowed the layman to touch the stars.  Not long in, band management wised up to marketing opportunities and put PR & marketing in charge of their facebook / myspace pages.

Twitter caused similar waves.  You can now find out what Aston Kutcher had for breakfast, what champagne Micky Roarke just sent back and or a dose of Stephen Fry’s ironic glee at the election results.

In January 2010 there were over 23 million active facebook users in a country of 60 million.  That’s over a third of the country!  It’s been so widely adopted that most of our mum’s are adding us as their friend. It’s a question of etiquette allowing parents into your quasi-private life.  My mum’s cool, so that’s cool.  But I remember a pal of mine didn’t want his mum to know he smokes, so he kept denying her requests.  But she continued asking.  So he reported to her as a sex pest and she got kicked off facebook!  Genius!  I love that tale.

While facebook is a household name, unless you’re a celeb voyeur, Twitter is still treated with mild suspicion and skepticism.  It is getting to a stage where MPs, newsreaders & journalists all tweet, and non-techie friends are using it socially. It’s referenced in commercials and is clearly breaking into the mainstream.  I’ve been a reluctant adoptee, mainly as I’ve enough work avoidance opportunities in my life already.  But on the face of it, Twitter looks like little more than facebook statuses stripped back and dismembered. Facebook minus the good bits.

Even though they blanket roll out new features at a whim, I can’t help but champion Facebook for it’s clean interface.  I feel myspace lost out not only on account of usability, but because they allowed users tweak their individual page theme.  Myspacers ended up with pages like this: 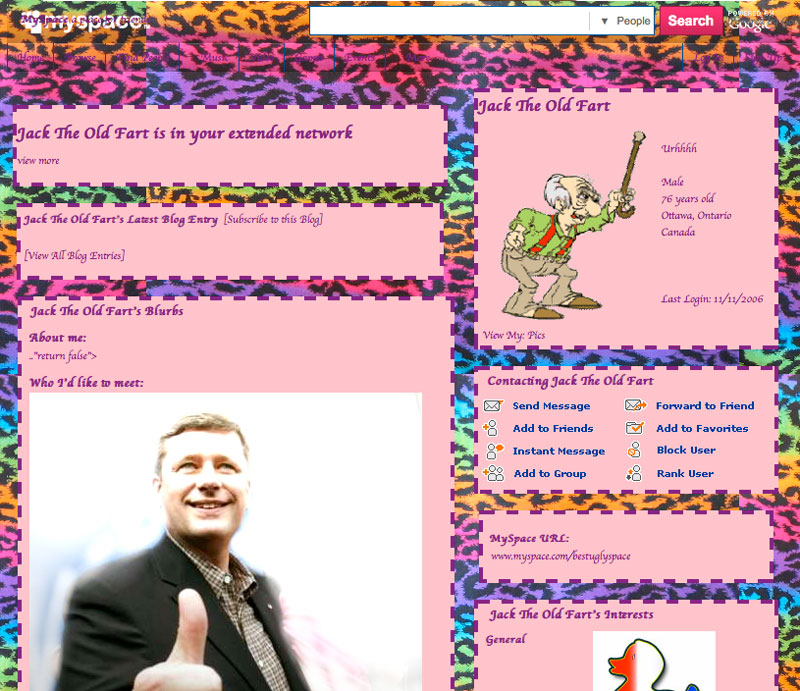 The human eye is attracted to white space.  Not global tecnicolour, as pioneered by ‘Jack the Old Fart’.  One thing I found in graphic design is never to assume people have taste.  Facebook is white.  It has a clean independent status, standing proud as your wittily worded beacon.  I like how posting random links don’t over-ride a status and how post comments are neatly nested in a thread.  Plus facebook has become so much more; a multimedia platform for all social media (music, video, photos, tweets, you name em, facebook loves ‘em all equally).  Better still, it’s cool.

But is Twitter of any interest or use to the layman?  If you were to look at two identically shot photos; one of an old bald man, and one of Bruce Willis, you’re no doubt drawn to Bruce – because he’s a star.  There’s something fascinating in their skin.  So I can see why people are so interested in following celebrity tweets.  Stephen Fry, essentially THE ambassador of Tweetland, has 1.5million followers.  It’s like the tenties version of reading Heat, but right from the horses mouth.

I was reluctant to sign up to the tweet, but my photo networky buddies told me I was missing a trick. Semi-convinced, I’ve been cowed into signing up and have used it for a month or two now…

You can see examples of that lot in my twitter feed below: 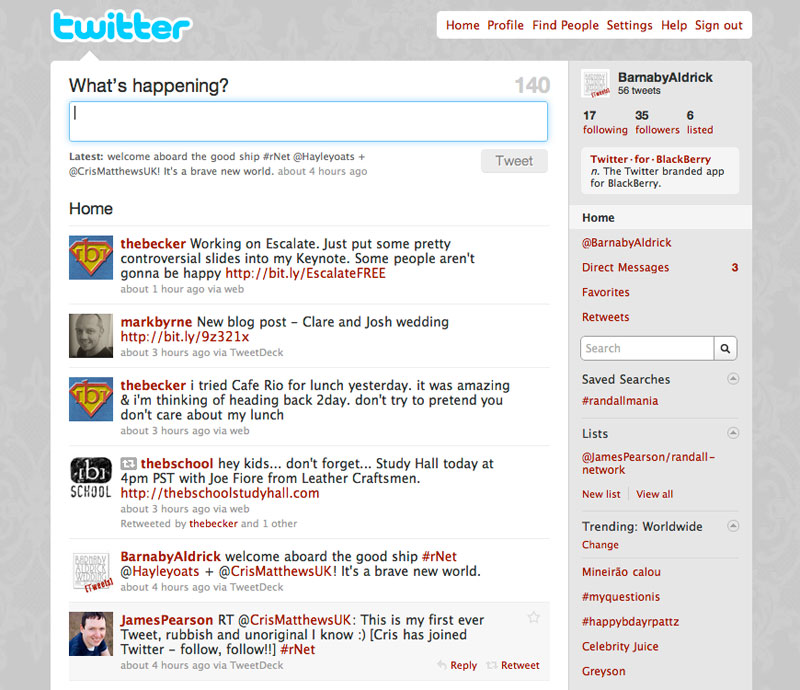 Last night I went to see Flight of the Conchords, and on the train hashtagged #FOTC and could see random gig goers excitable tweets about the upcoming gig (which was amusing and amazing in equal measure – if you don’t know FOTC, check em out!).

Officially, Twitter is currently web-bound at www.twitter.com, but there are a wealth of sophisticated phone apps that allow you to tweet & follow Twitter.  Tweetie, Twitterific & TweetDeck seem to be the most popular on the iPhone.  I’ve tried a few and like Tweetdeck cos it allows you to selectively tweet to your twitter feed, your personal FB profile, your FB page or a selection of all three.  You can also create columns of chatter to follow your fave peeps, hashtags & places you’ve been mentioned… like so: 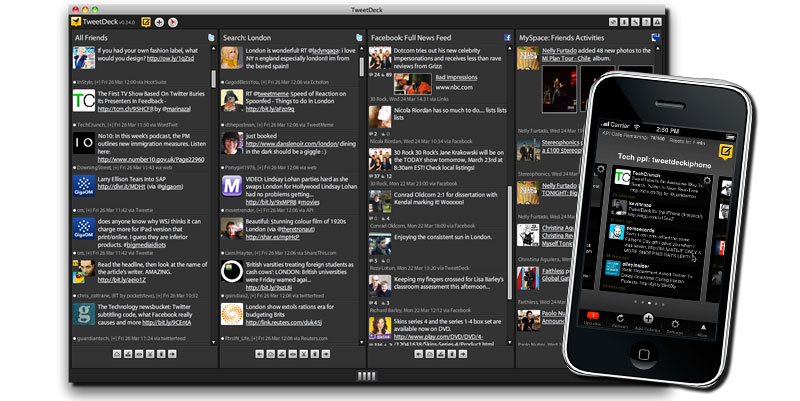 Personally, I think different social media serve different purposes.  Facebook is powerful as both a social and business tool.  I keep my personal facebook page for my private life and my blog has been an awesome place to show off recent client work alongside what excites me.  My Barnaby Aldrick Wedding Photography Facebook page brings my blogs to facebook and lets my clients become fans of my work, which in turn allows me to tag them in the On-The-Day slideshows I post after the big day, thereby feeding through onto their walls. TweetDeck on the iPhone twitters between all three – and acts like the sand between the stones. 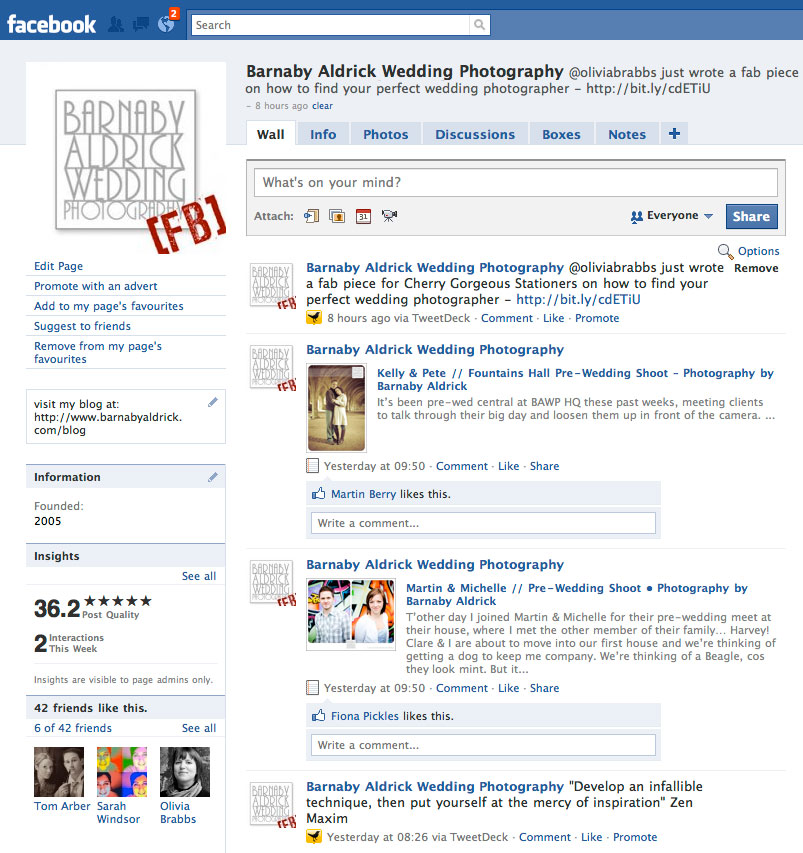 It’s mad how social media draws around you.  Look at all these different ‘social media’ brands:

However, the world of Twitter, like it’s name suggests, does leave me feeling a bit lost in birdsong.  I have criticisms. I don’t like are how you have to follow mini-links to images, dispersed around randomly hosted sites, and backtrack through Twitter’s ‘in reply to’ links to see what folk are actually on about.  And more fundamentally, I’m not into on the idea of micro-blogging the completely mundane.

Here’s an wry video about the way things are going…

With the Twitter interface itself, unlike in facebook, it can be hard to get a feel for a full conversation.  You have to sourcing your way back along visually disconnected but linked threads to decipher the context.  Plus, it’s not hugely smart that when replying to someone else’s tweet, your reply becomes your new Tweet.  That way unless someone stumbles upon one of my original tweets, they’re likely to see an independent tweet that appears unrelated to anything.  It’s a bit like strolling into a conversation and playing catch up. “@jobloggs – that sounds like a good call! I’d not thought of that” isn’t really an inspiring hook into the mind of Barnaby Aldrick. 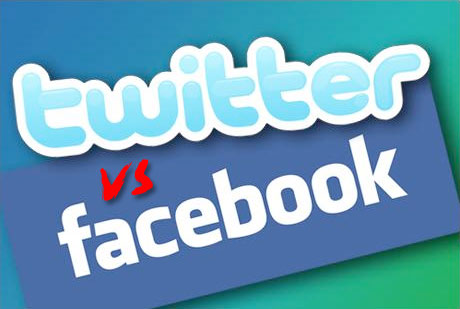 Word around the campfire is that Twitter.com have bought the iPhone app Tweetie and are redesigning it to release as an official Twitter app.  Hopefully the app will reign in the strengths of the current apps out there and will clean up the interface making twitter more accessible to the masses.  I think Twitter’s problem has been showing & helping new users see the social tool’s usefulness and getting them hooked. But it still feels a way off before my Mum’s gonna be Tweetin’ about who she lunched with at a nice pub in the Dales.

I hope that wasn’t too boring for you all!  I’m enjoying posting my tweets into cyberspace.  If you fancy following my Tweets, click here.  Also – if you’re an actual / prospective client or would rather follow me through facebook, I’d be honoured if you’d visit my official Barnaby Aldrick Wedding Photography facebook page here & click ‘like’ or use the buttons below.