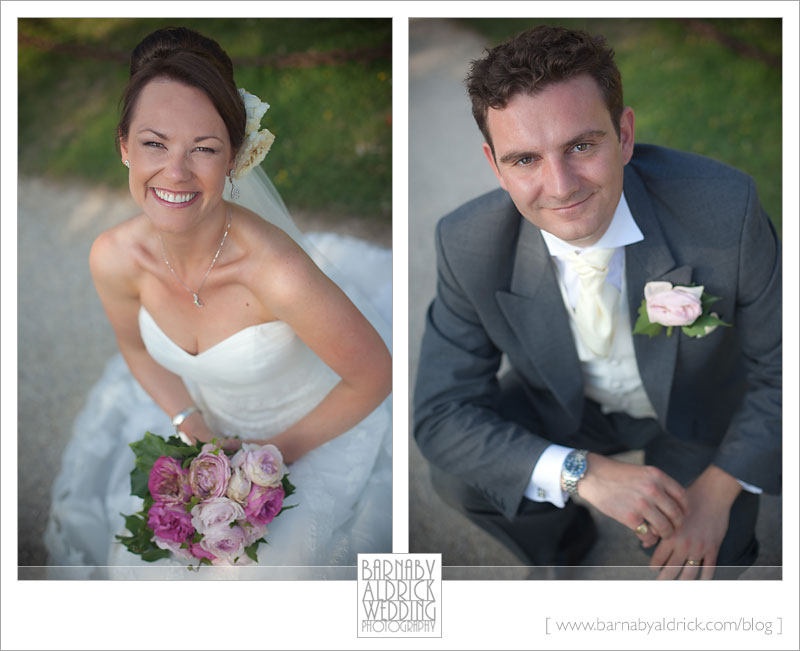 I shoot some cool weddings for funky couples (for example, today’s wedding flew Clare to the castle with the groomsmen in helecopter!), but one of the coolest weddings of the year for me was the wedding of Deborah & Jimmy.  If you’re a follower of this blog, you’ll remember I shot their pre-wed last week and Debs wore her mums retro wedding dress (post here).  James is half French & Debs spent ages in France, so they decided to have their wedding at a French Chateau! 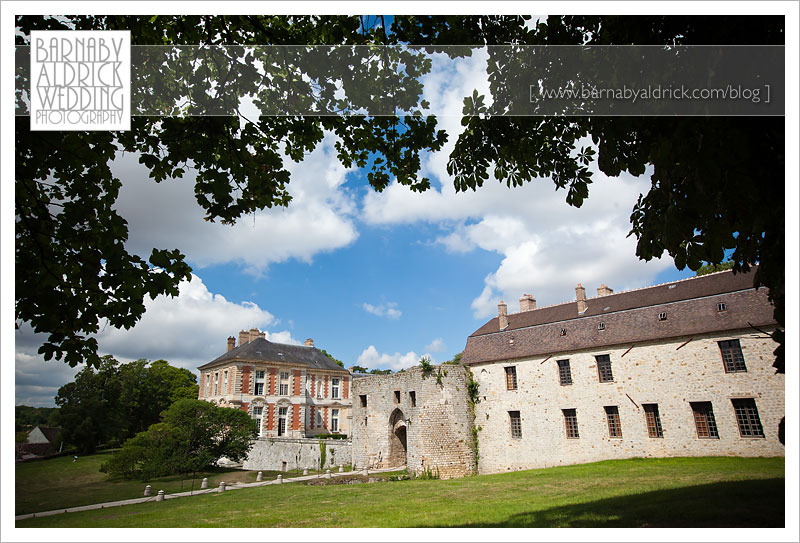 Logistically, it was always going to be ‘interesting’ to get us from Saturday’s Nantwich wedding to Sunday’s bash at Château des Condé in Vallery, an hour and a half South of Paris.  But Debs & James liked the work I did for a pal of theirs and we made it work.  It involved staying at Manchester airport and an early start, and a hire car, but we made it for noon, and man the place was simply breath-taking. 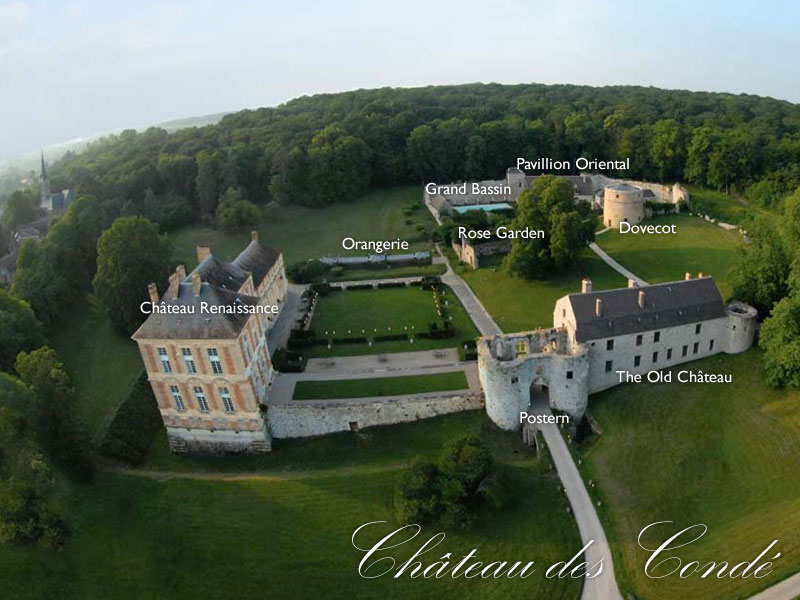 Check this aerial pic I pinched off their site & labled… Not bad eh?

When we arrived, we joined the gang were lounging round at the pool, & having a bite in the ‘Pavillion Oriental’, a funky Moroccan-themed room.  The ceremony wasn’t till 3ish, so we got our bearings with a lap of the grounds and after being shown our room in the old Chateau, we split up in search of Debs & James… 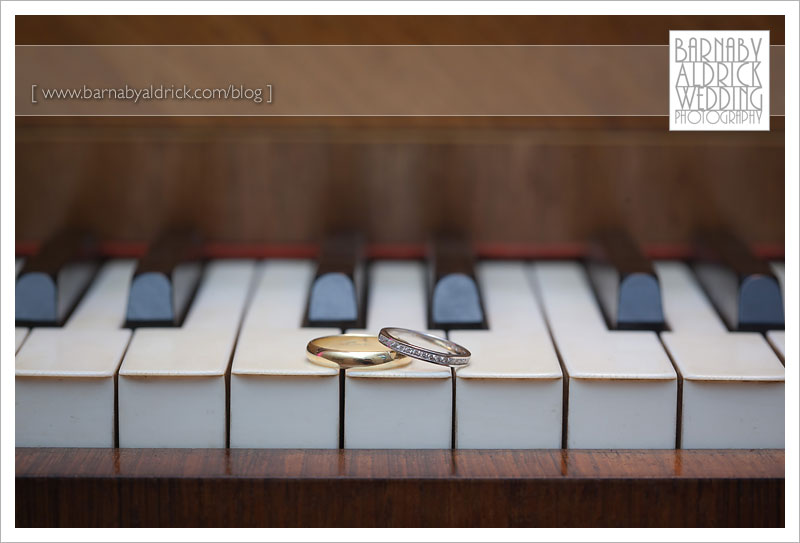 As Debs’ entire family seemed super musical, & there was loads of piano play throughout Debs & James’ wedding, I photographed their rings on the keys & set their slideshow to Ludovico Eunaudi’s ‘The Days (I Giorni)’.  I don’t listen to a great deal of classical music, but the Eunaudi Echo’s collection is both soothing and amazing, and can be bought from Amazon here. 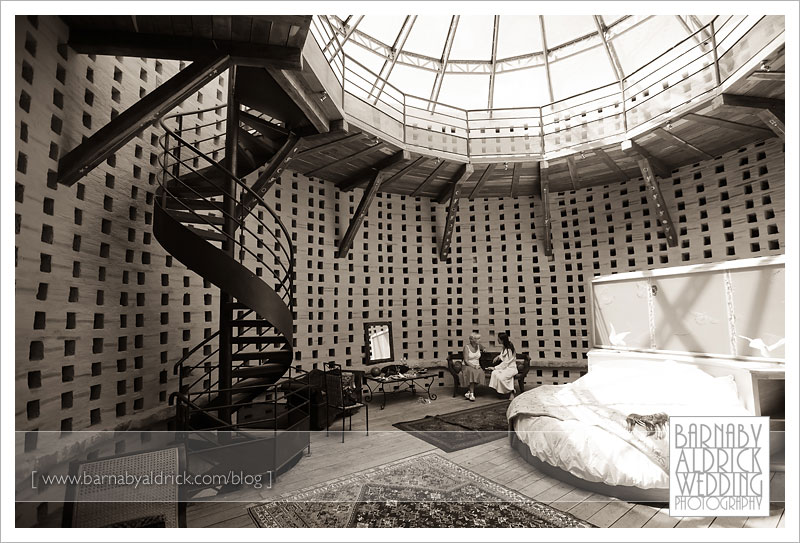 So, Deborah & her girls were getting ready in the ‘Dovecot’ (or ‘Le Pigeonnier’), a former aviary that’s been converted into the bridal suite.

The holes in the walls were once nests, and now make for an unusual feature.  There were 3 floors inside joined by a spiral staircase… 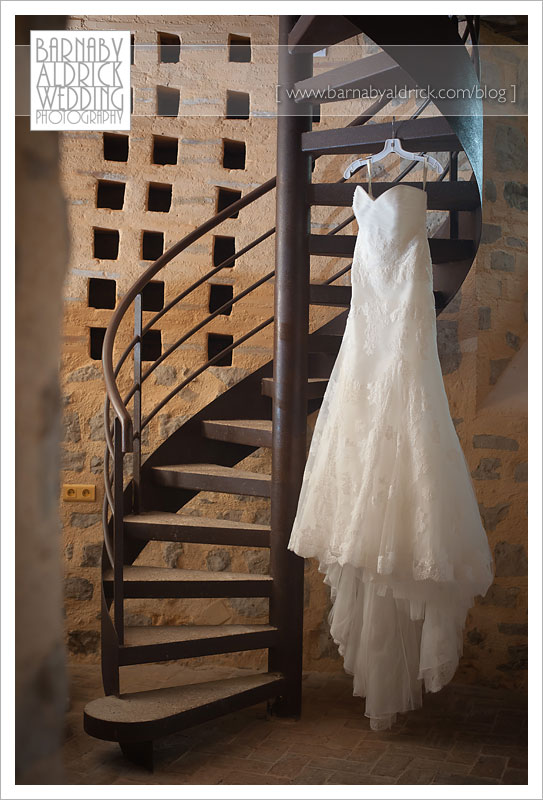 On which I hung Deborah’s beautiful gown. 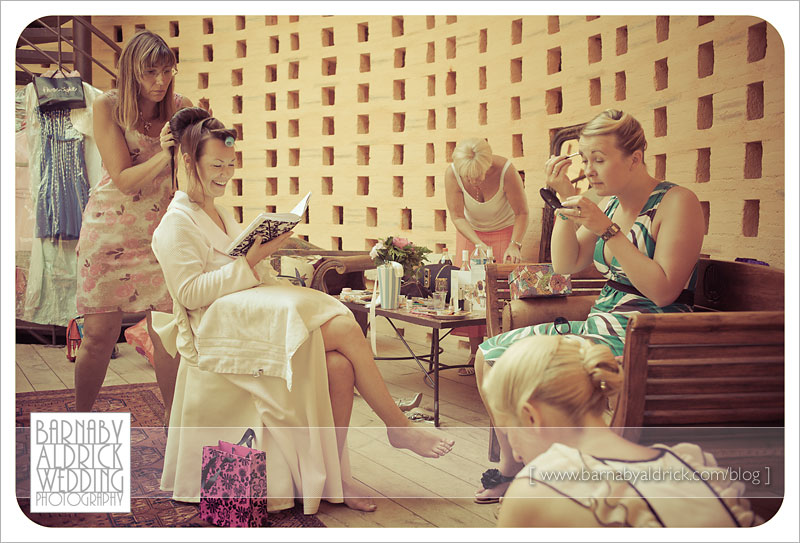 I like this one of her girls getting ready, while she reads an emotional book they made for her full of comments and photos from her pals. 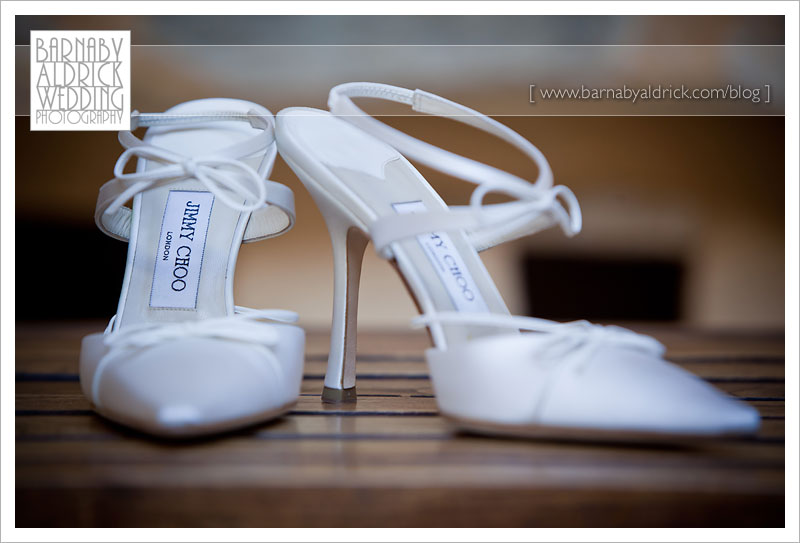 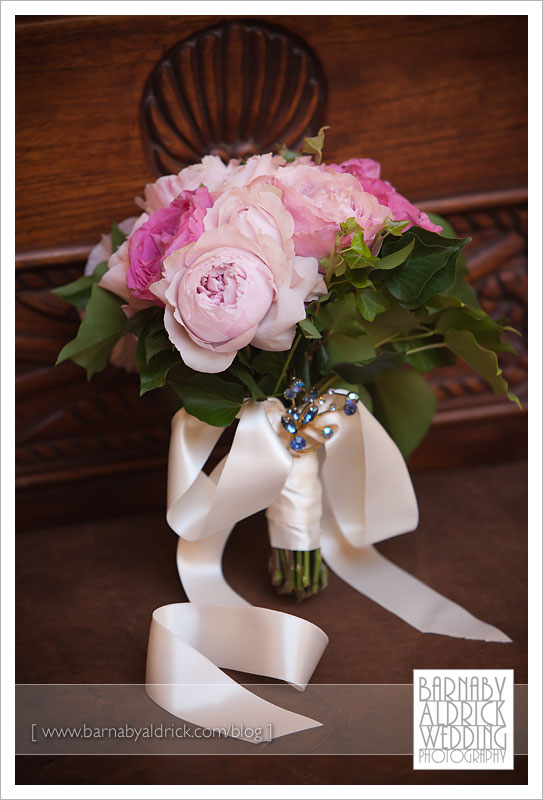 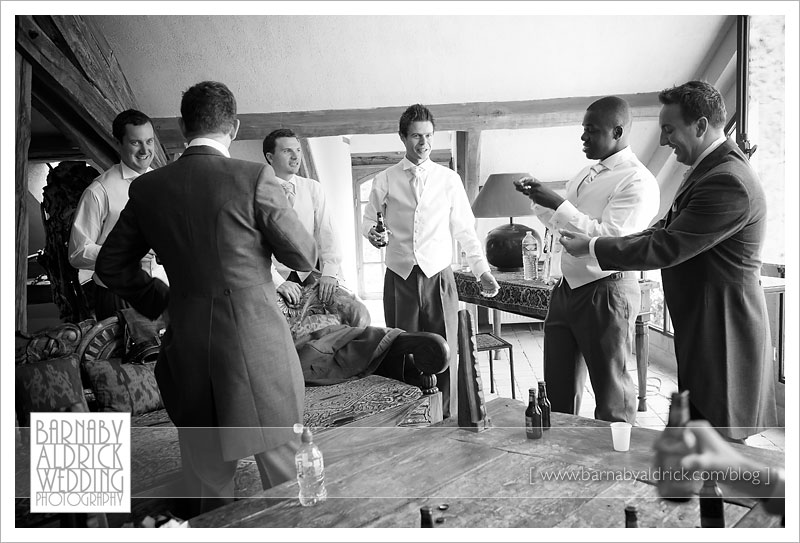 Meanwhile, upstairs in the Pavillion Oriental, the chaps sharpened up 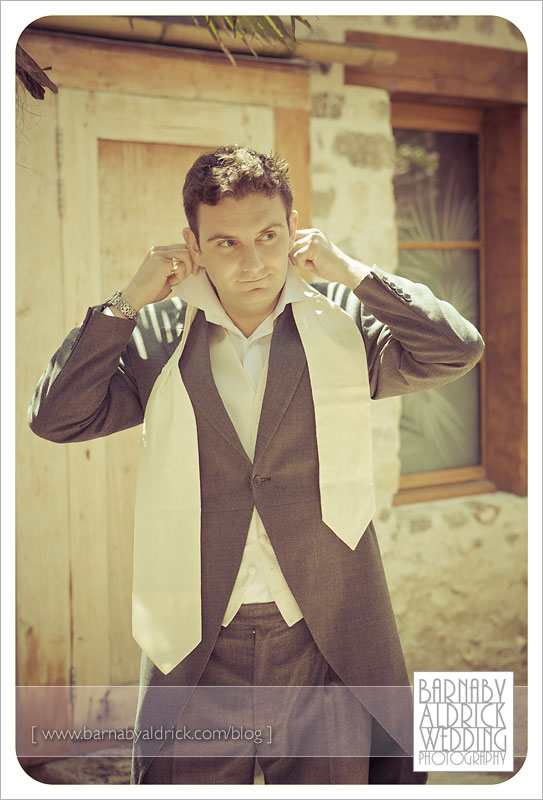 The man of the hour, Monsieur James. 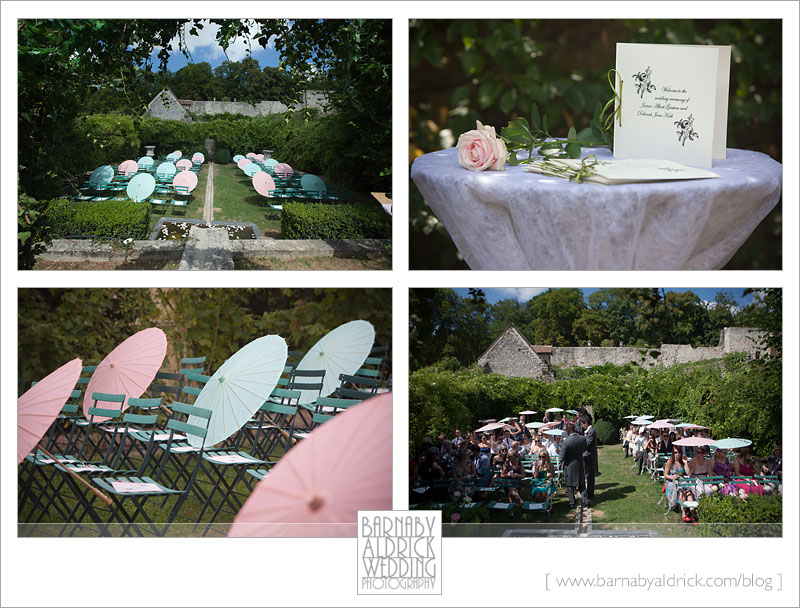 One thing I don’t like about English weddings is the unpredictable weather.  Another thing is the fact that UK weddings have to be in religious places of worship or buildings sanctioned for marriage.  Therefore, in England, you can’t have a ceremony in a forest, even with a vicar and a registrar.  So unless you have a civil ceremony first & a blessing later, UK ceremony’s are always indoors. Which is probably good in England, cos of the weather.

But a lot of the services I see in the OC stateside bloggers are on beaches, in fields, in a forest under a chiffon canopy, etc, and I’ve always wanted to shoot an outdoor ceremony.

So it was so nice to shoot their ceremony in the Chateau rose garden.  No more scrabbling around at 800ISO+ with 1/50th shutter speeds. 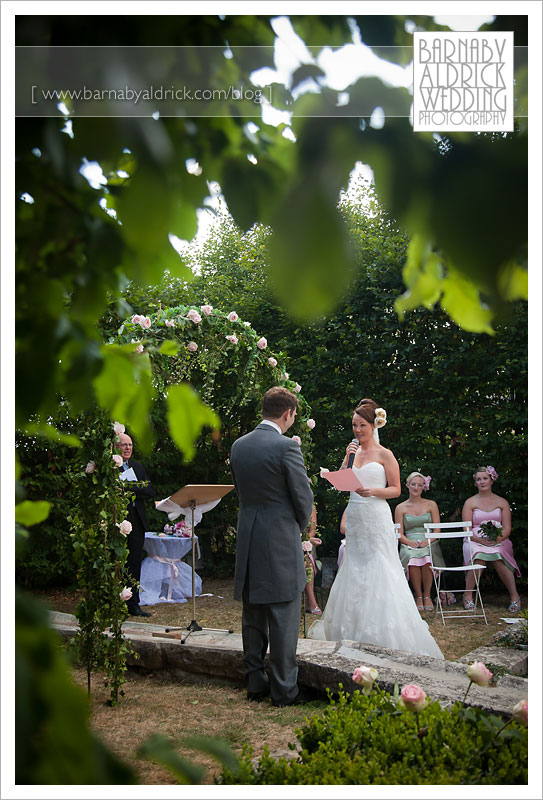 Their hand-penned vows brought a tear to more than one eye. 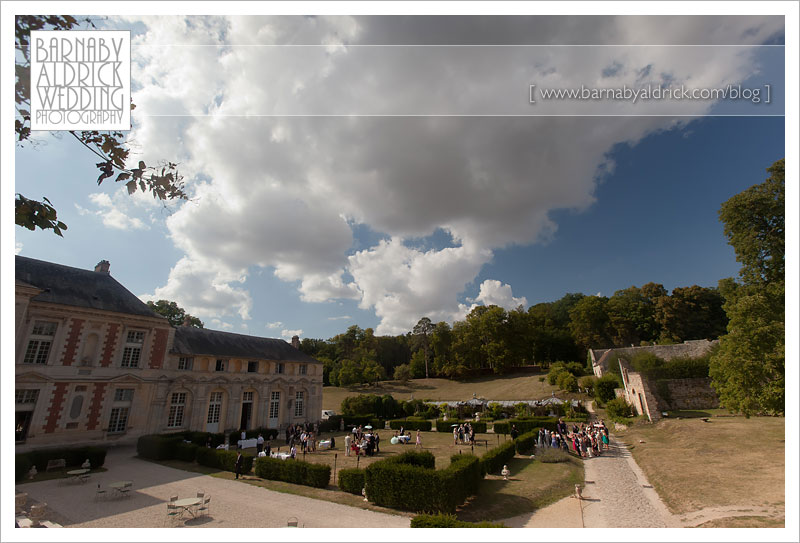 Afterwards, and through a storm of natural confetti, they filed into the ‘Orangerie’ for aperitifs & tasty nibbles.

I found this viewpoint above the Posturn, and only realised once I was up there that it was rigged with a sea of fireworks & fuses. 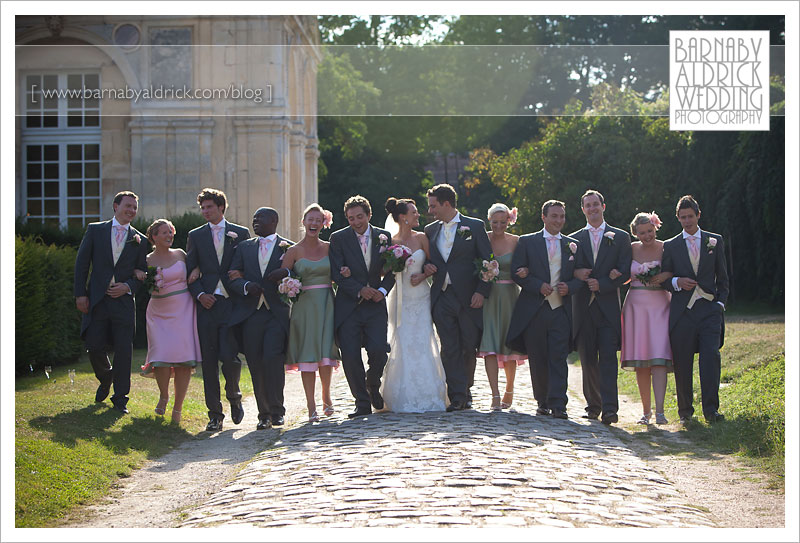 The quality of the sunlight was also an absolute pleasure to work with, backlighting their chilled out groupshots. 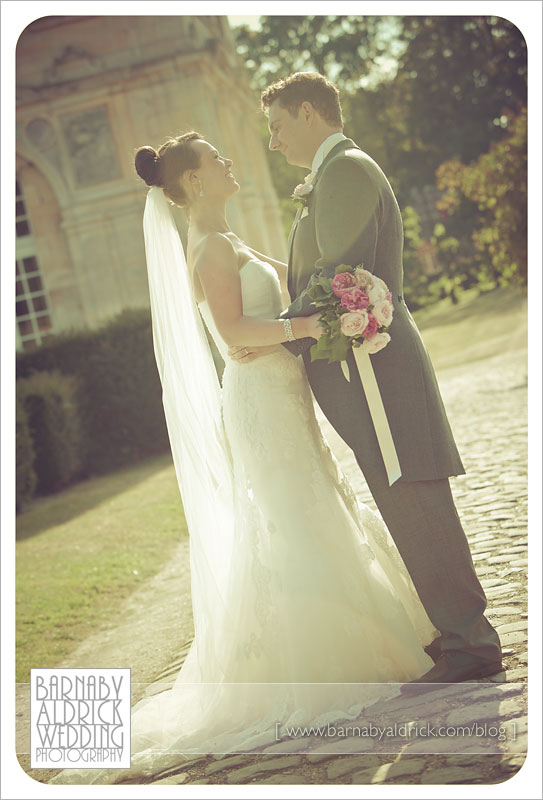 Don’t they look amazing?  Finished off with a bit of flare. 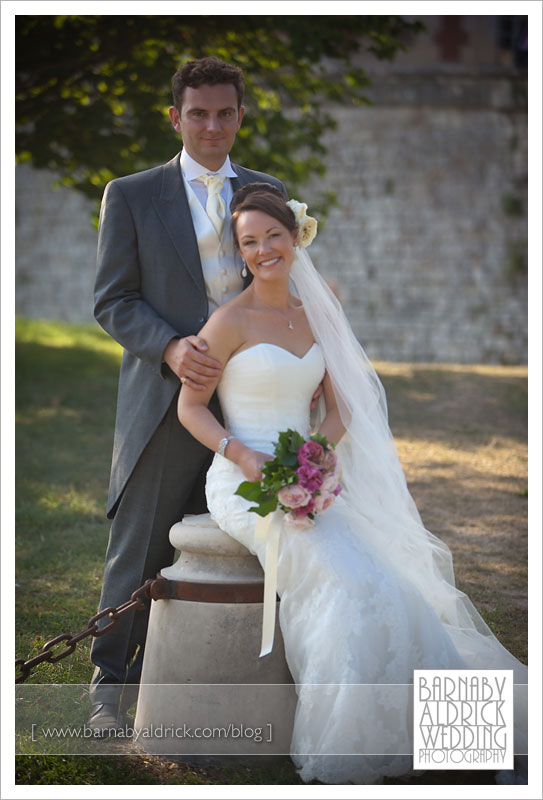 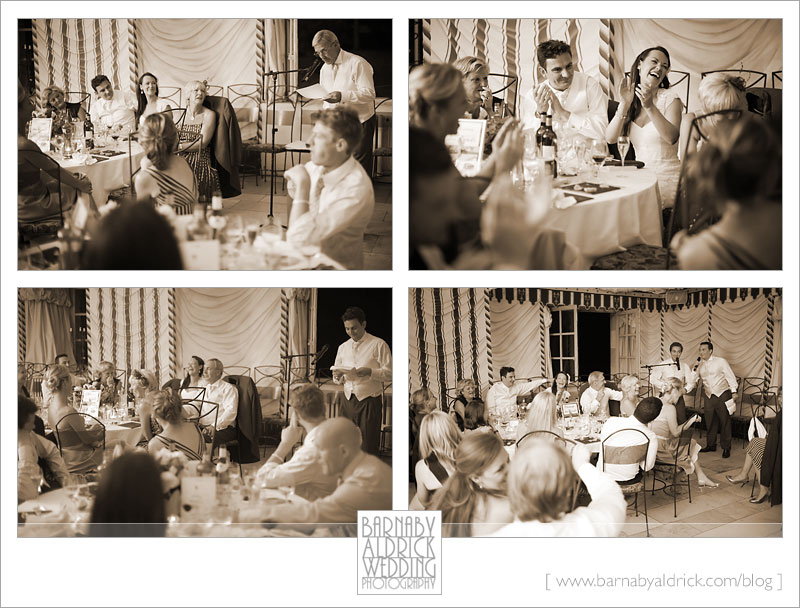 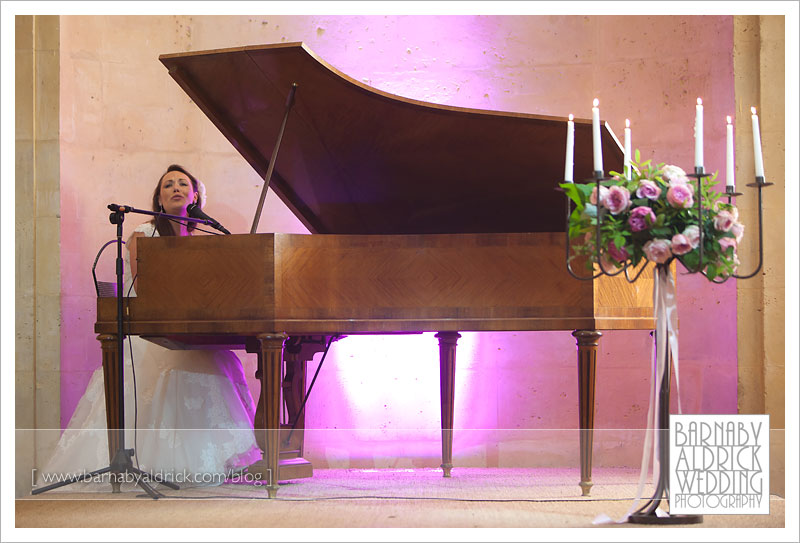 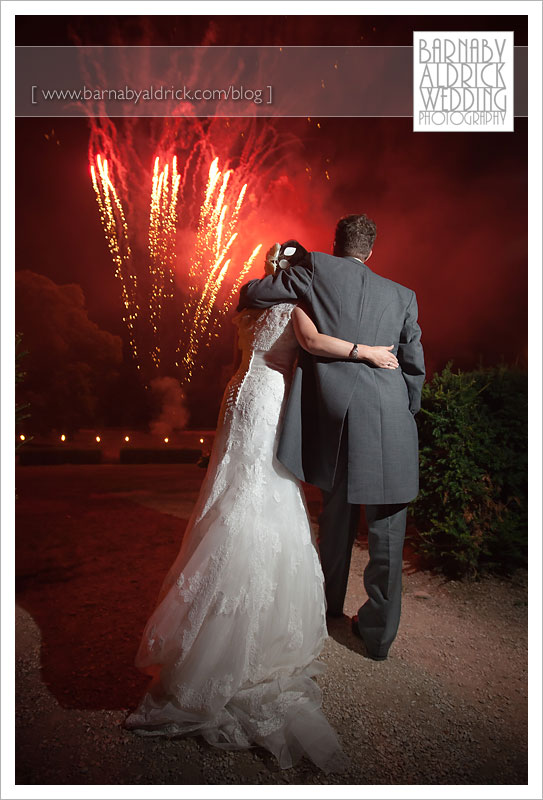 Then they had fireworks go off from all around the Chateau 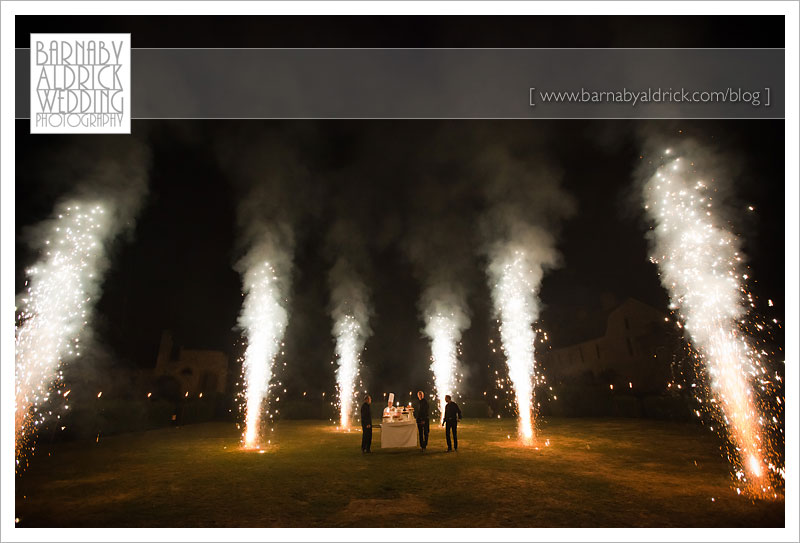 And out of the finale came a table covered with deserts and their wedding cake! 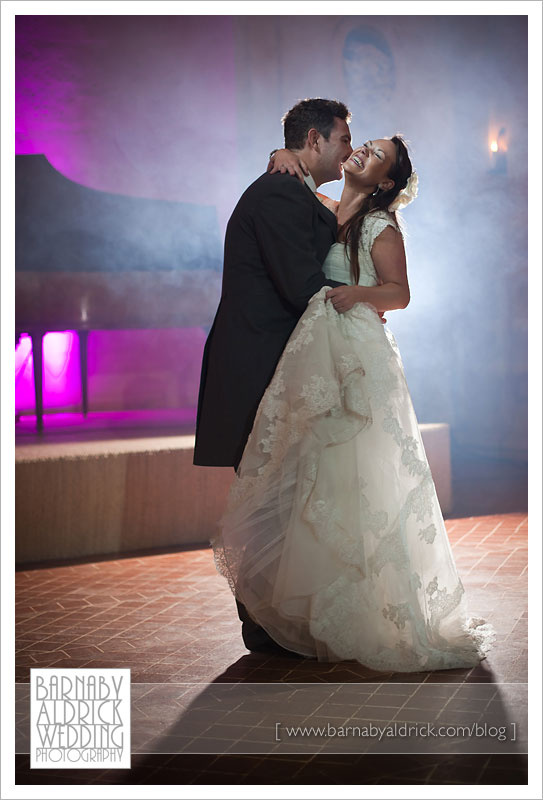 I love the lighting on this first dance.

For the geeks out there: I rigged up my Quadra onto the stage candelabra to backlight them (hence the forward shadow), had an on camera 580 flash firing directly at them at low power, and the rest of the moment was made by the DJ’s smoke machine, a spotlight shining down onto the her face & a little luck. 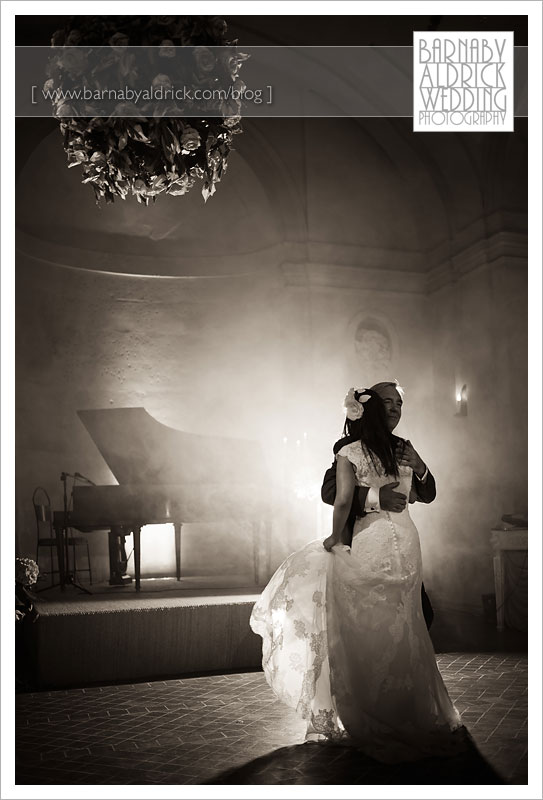 The same setup caught this moment of Dad & Debs on the 2nd dance. 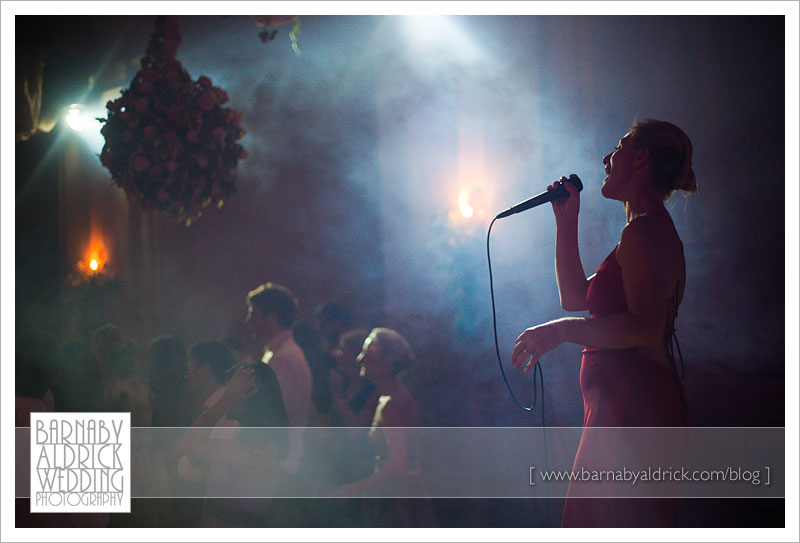 The subsequent entertainment was supplied by Emma, Deb’s sister, who laid down cabaret & covers to get the dancefloor dancing till the wee hours.

It sounds super cheesy, but the thing that impressed me even more than the amazing Chateau and all it’s trimmings, was how chilled and in love Debs & James were.  A wedding this fancy can potentially become about showing off, but in their case it was about setting up a fantastic day and then letting it wash over them and their near & dear.  There was very little stress anywhere, and they totally took us in & gave us everything we could have required.

I knew it was gonna be a cool one, but this was yet another wedding that reminded me how lucky I am to do the job I do.  How cool is it to have lovely people fly us internationally to shoot their big day!?

The following morning we raced back to Paris to spend 24hrs moseying about & eating at a place D&J’d recommended before heading back for today’s wedding. 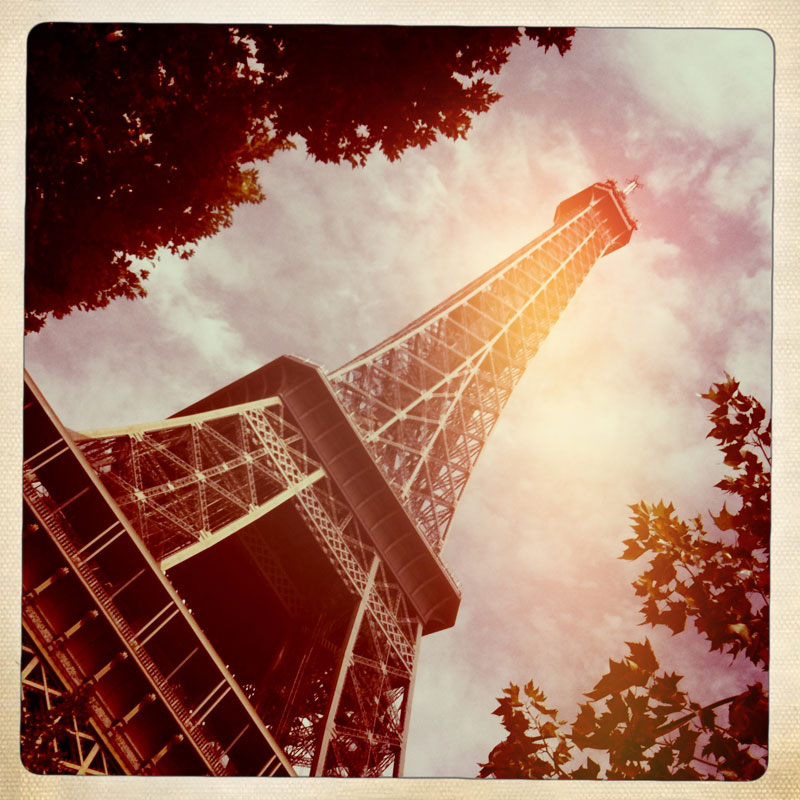 On our meander around Paris, I decided to leave the ‘real’ camera gear in the hotel & shoot images on the Hipstamatic app on the iPhone.  It’s got it’s bugs & flaws, but brings the half-baked iPhone camera to life & adds a wicked vintage touch to the images.  I’ll do a whole blog of my faves in a post soon.

So, it’s getting late and it’s time to catch some Zzzs! Thank you to Deborah, James & your fine folks for asking us along to your wonderful day!  I’ll post  their finished images to them soon, and will host a client area for guests to see their finished images.  In the meantime I hope they’re enjoying their honeymoon in Bali!