Last weekend I was lucky enough to do the shoot another foreign wedding, this time it was French destination wedding photography in the Alsace region, around the France/Germany/Swiss border.

I’ve known Rich for years & flew out a few days early to hang out and sample the local cuisine.  Rich and Anne-So (who’s French) used to race the rats in London, but have since moved to the pretty town of Cernay (hence the French wedding).   I’ll probably post some pics of the area from our days before, including a day wearing silly hats in Strasbourg, but if you’re sitting comfortably, let me show you through Rich & Anne-So’s big day! 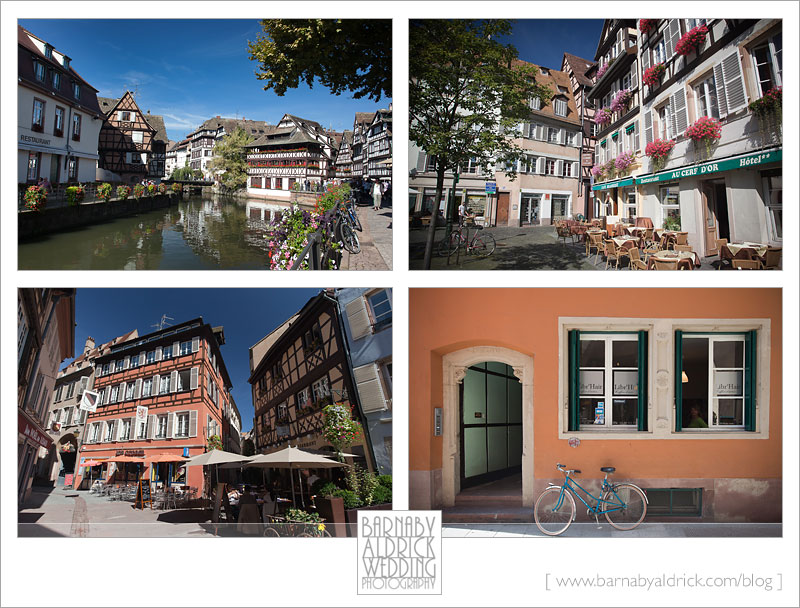 I joined Anne-So for her preparations in the super picturesque and gloriously sunny city of Strasbourg. 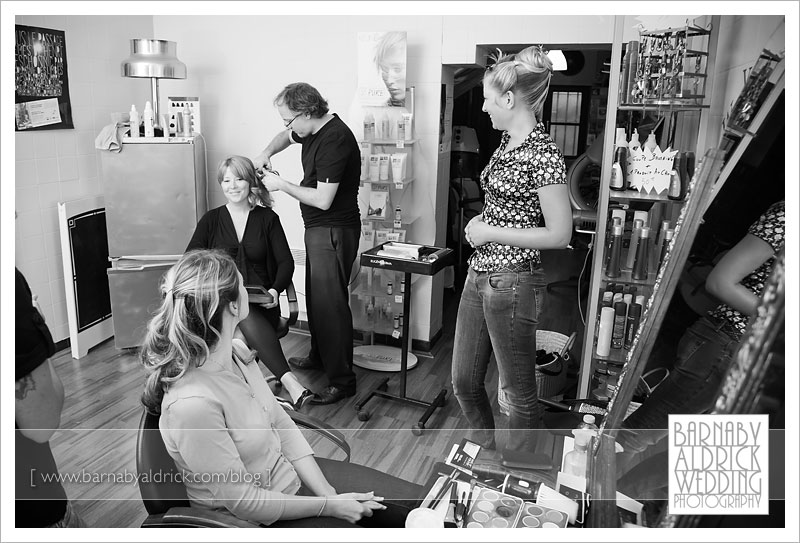 Here are our girls of the hour, Anne-So & her two ‘witnesses’ (not ‘bridesmaids’ in France). 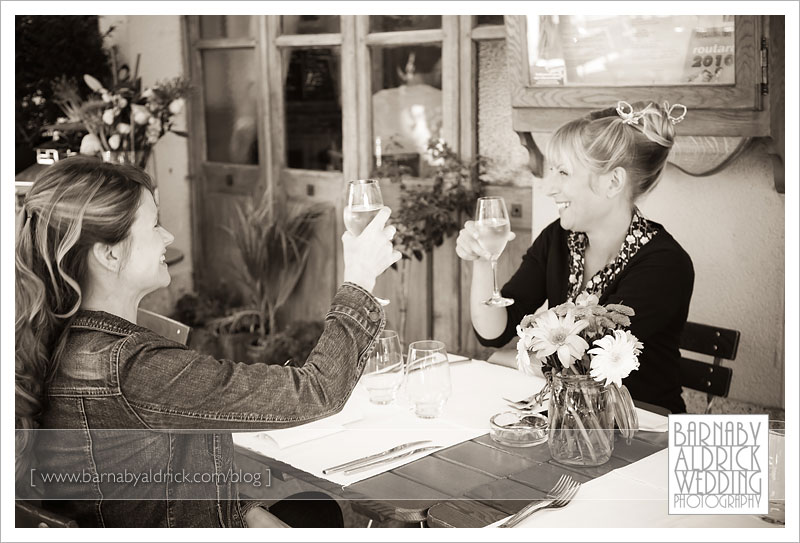 After hair & makeup I joined the girls for a relaxed lunch.  I love the fact that French weddings are late in the day (the ceremony started at 4pm), so the day can be really chilled. 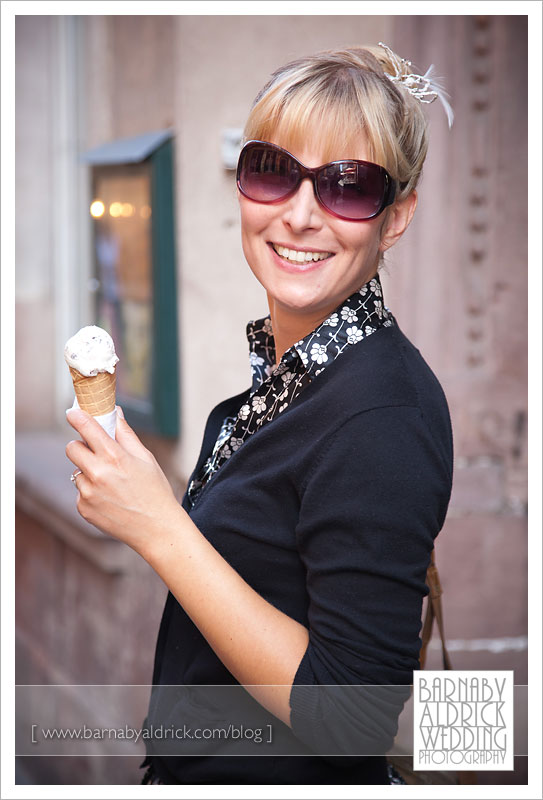 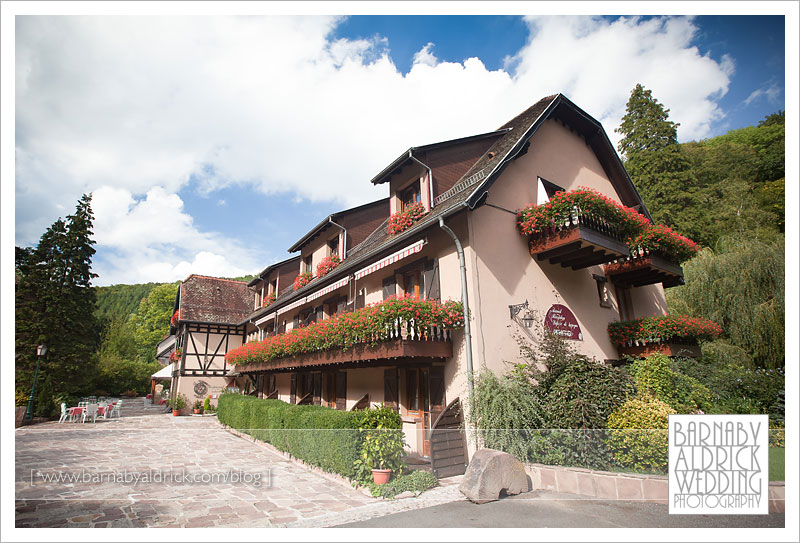 Their stunning reception venue was once an old Alsacian Mill.  Loving the local floral flair. 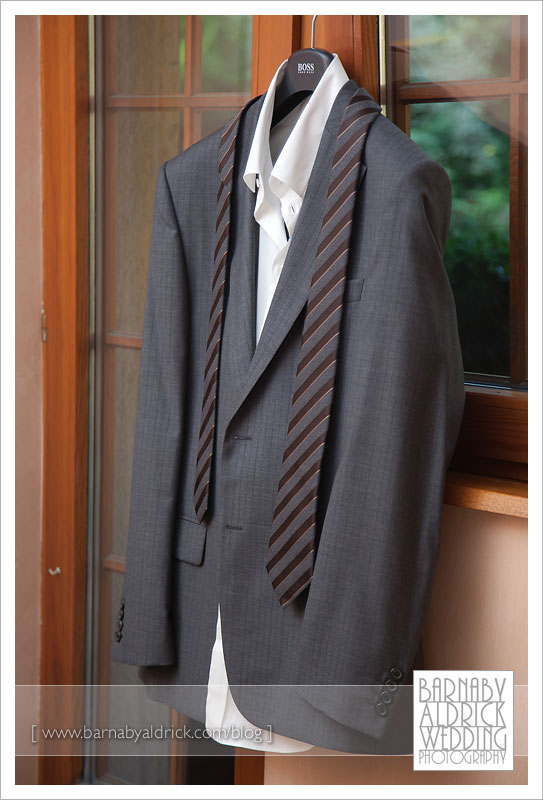 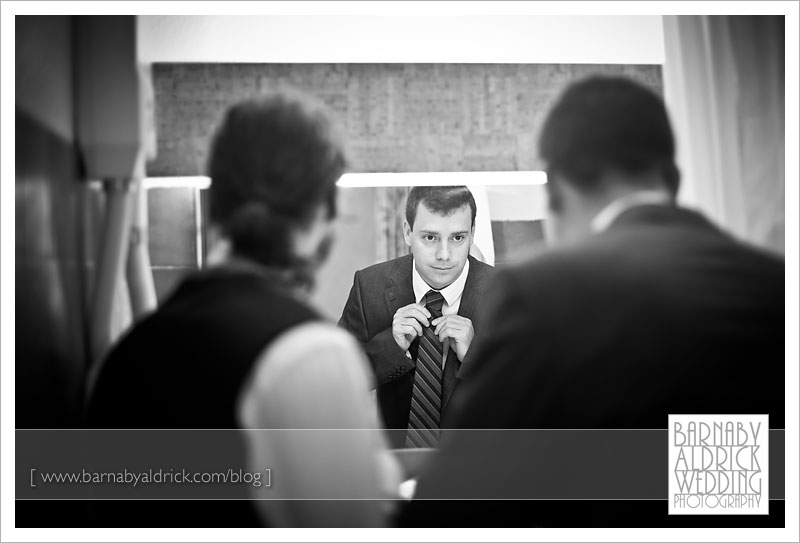 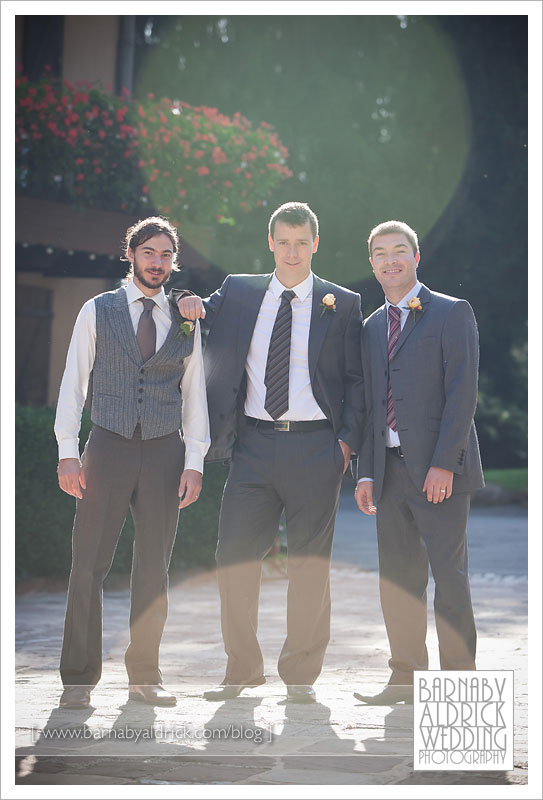 Rich and his witnesses… 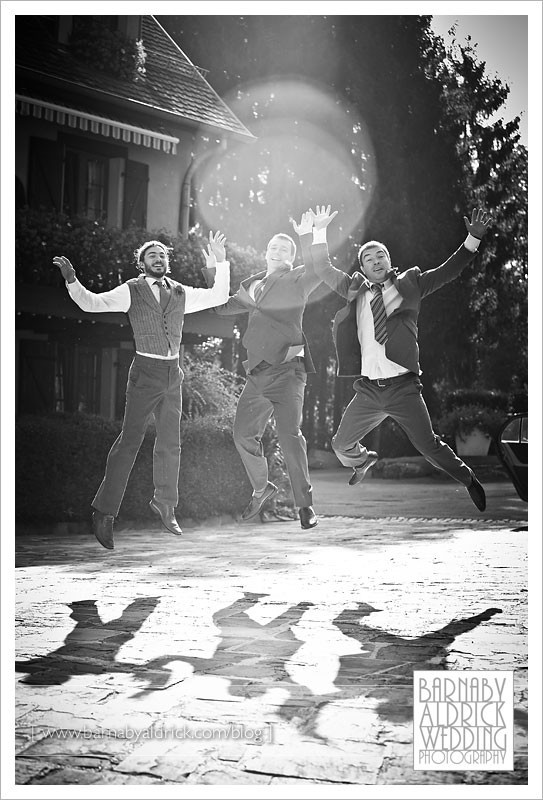 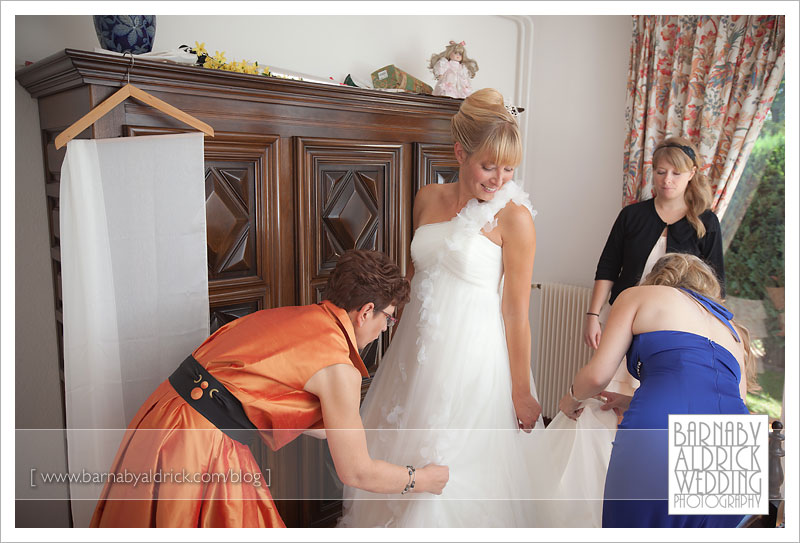 Back at her parents, Anne-So slipped into her lovely dress. 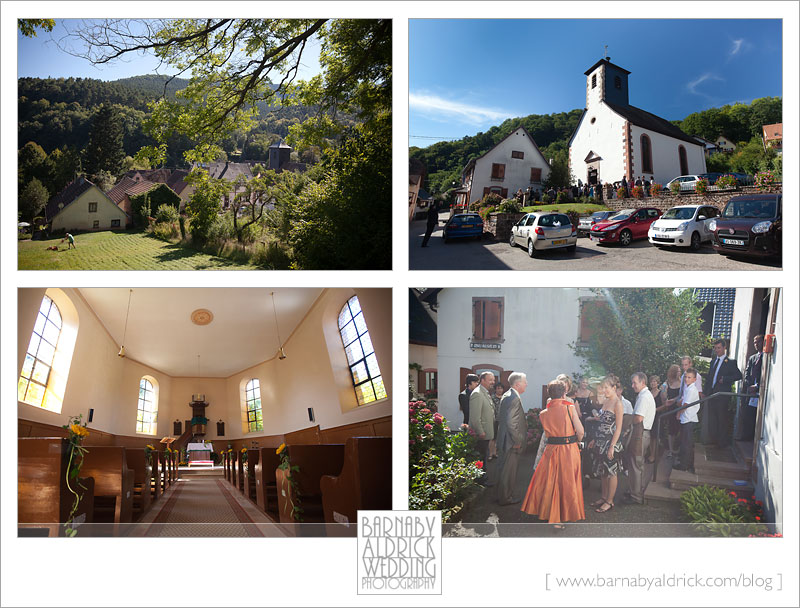 Their church was up the road from the Mill, in the picturesque village of Klingenthal 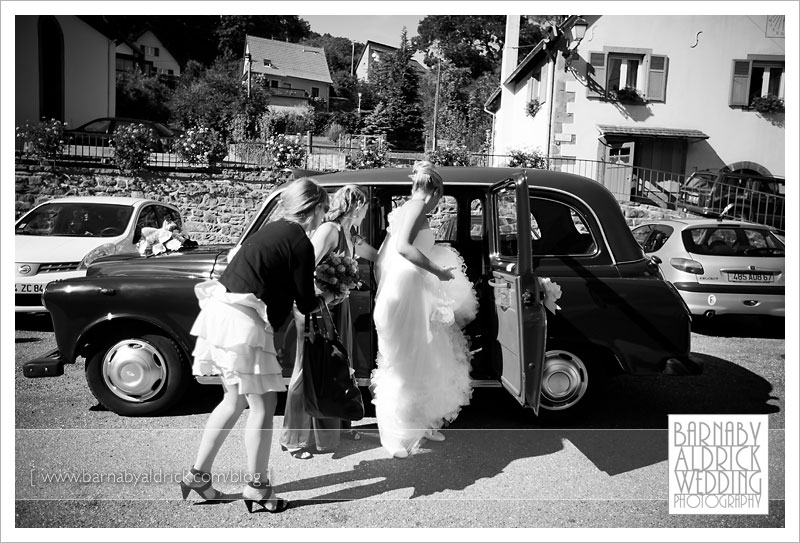 As a reminder of London, they had a hackney carriage to run them about! 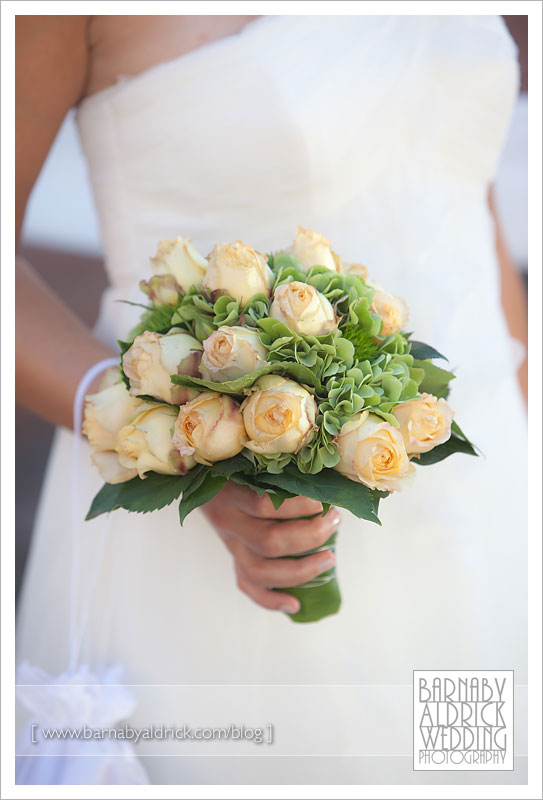 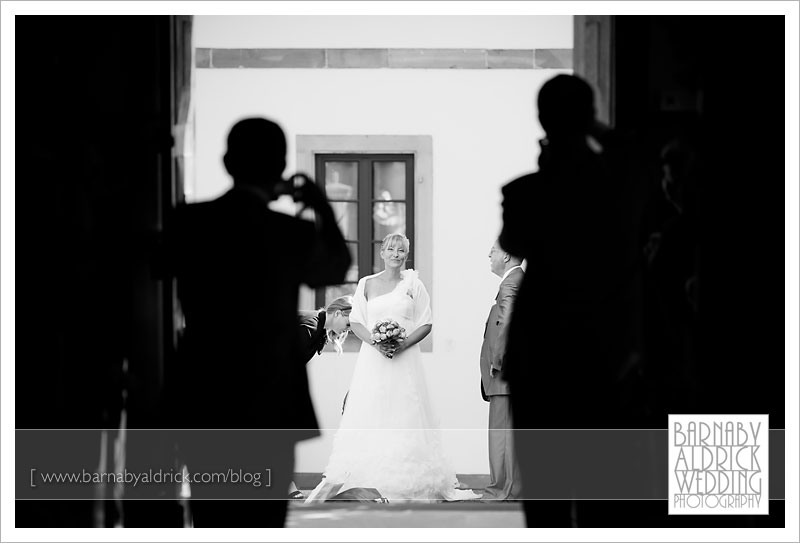 Looking down the aisle, framed by snapping silhouettes 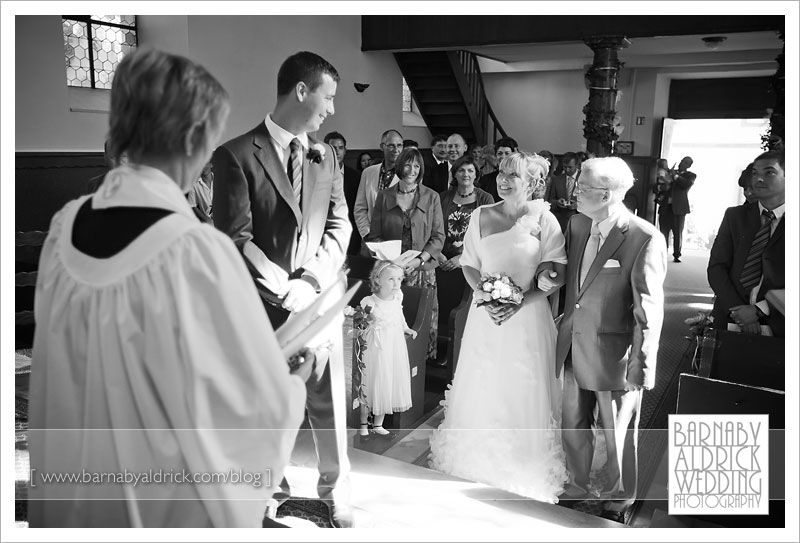 I like to try and catch that excited first glance 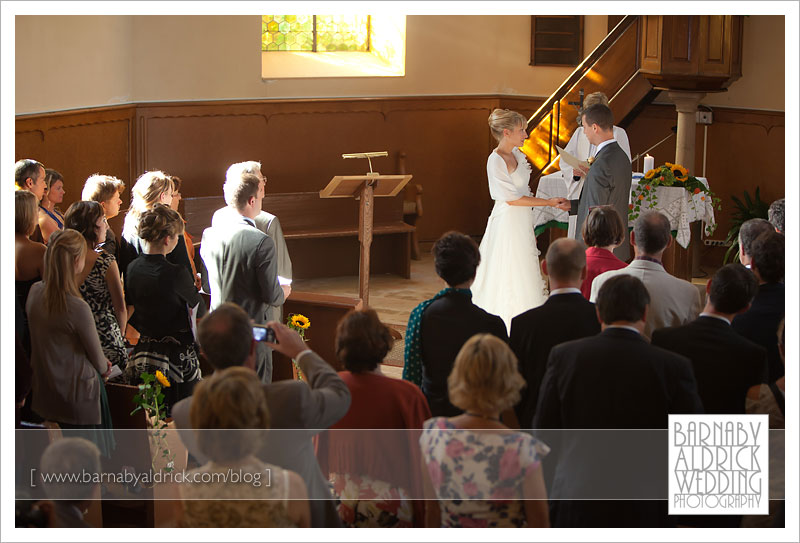 The late afternoon French sun pouring into the church was a delight. 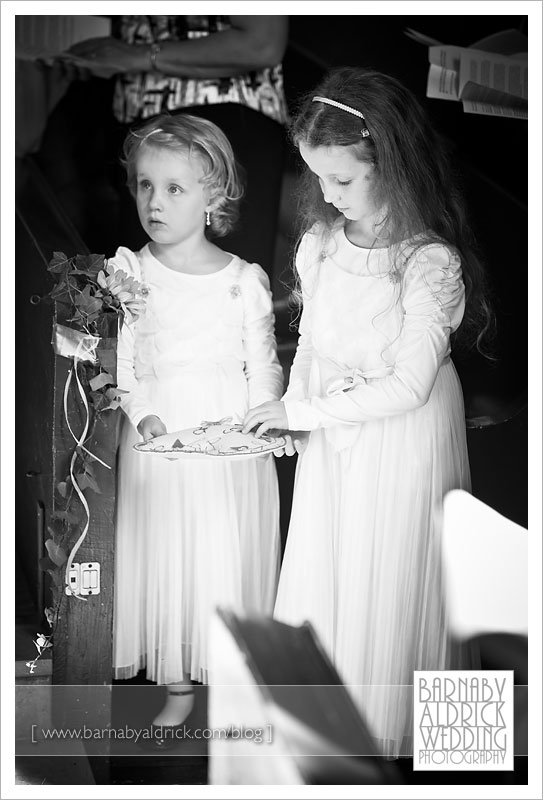 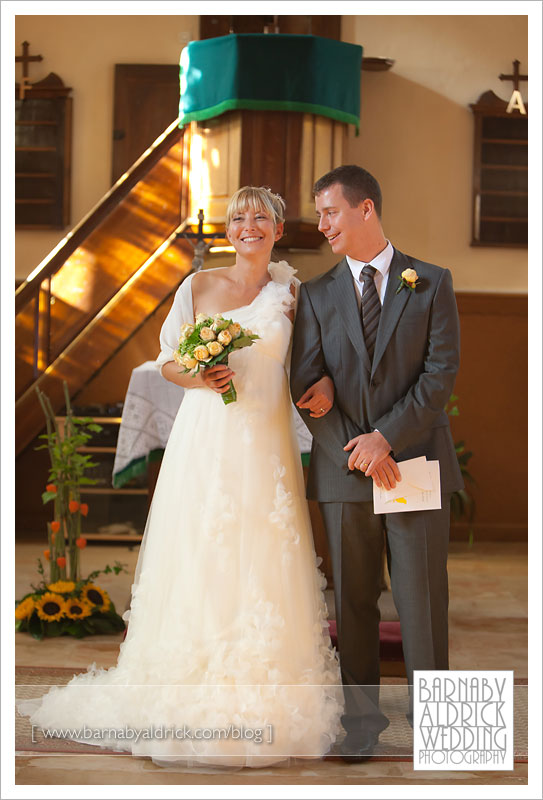 After an emotional clarinet solo of ‘Hallelujah’ (a la Jeff Buckley), they had a choir sing ‘Oh Happy Day’! 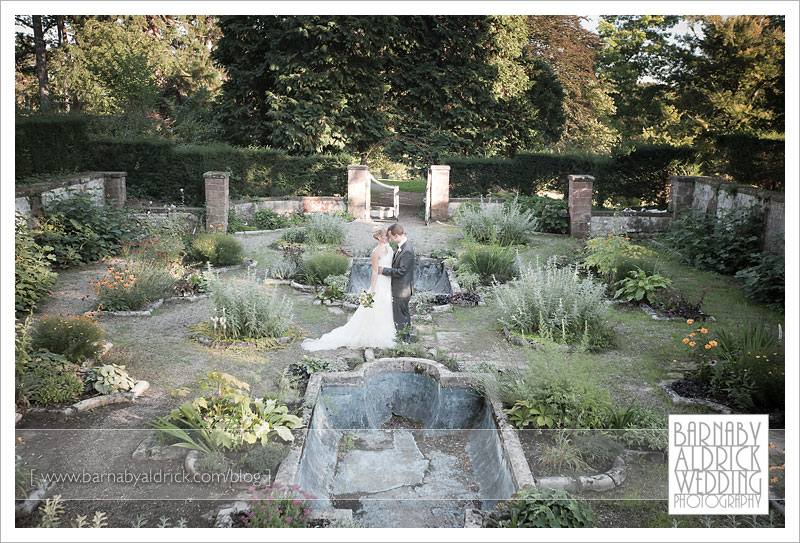 Down the road from the mill was a spot Anne-So & Rich had in mind for a few pics, so we zoomed over in our taxi, supping bubbles.

It was the unkempt & slightly overgrown ornate gardens of a big disused country house, that has become a kind of park.

Rich liked the shabby chic charm.  I did too. 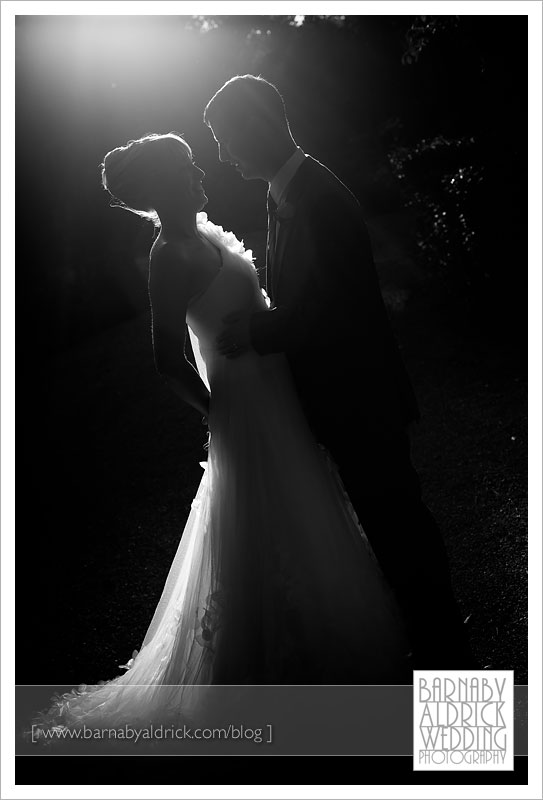 I also liked the light! 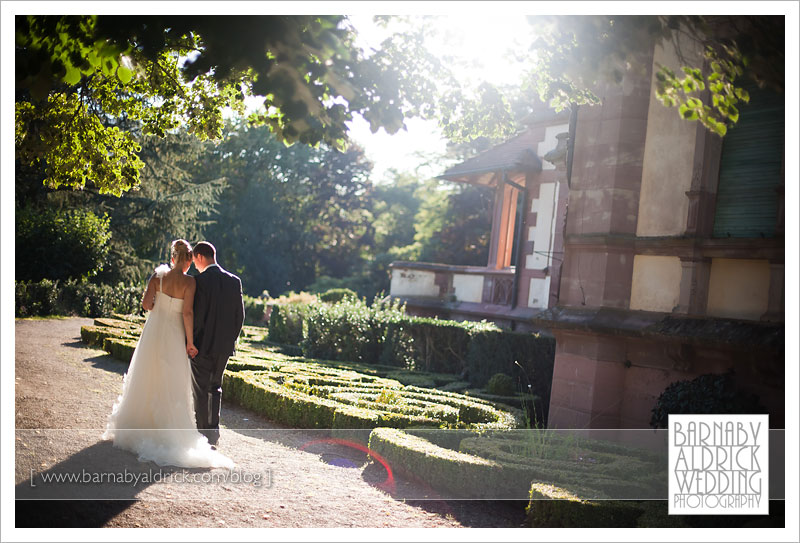 We didn’t have long, but it was lovely to take a turn around the place in the late evening sunlight. 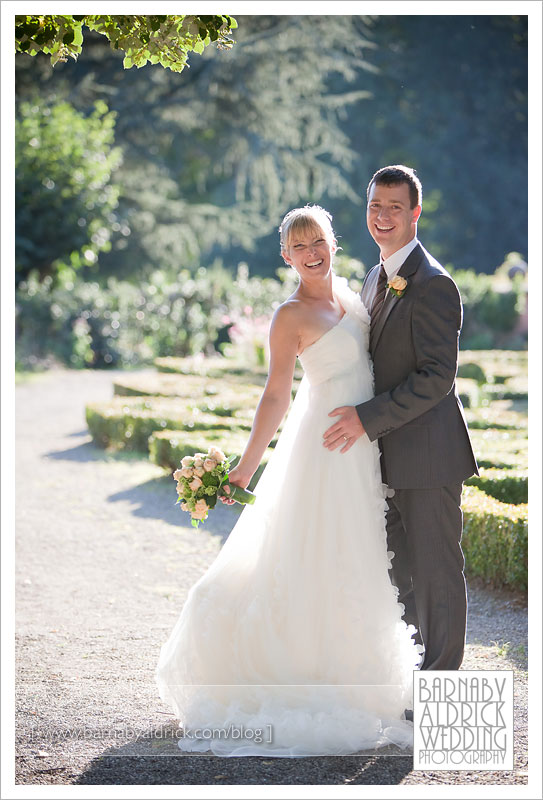 Probably a moment of me saying something dumb. 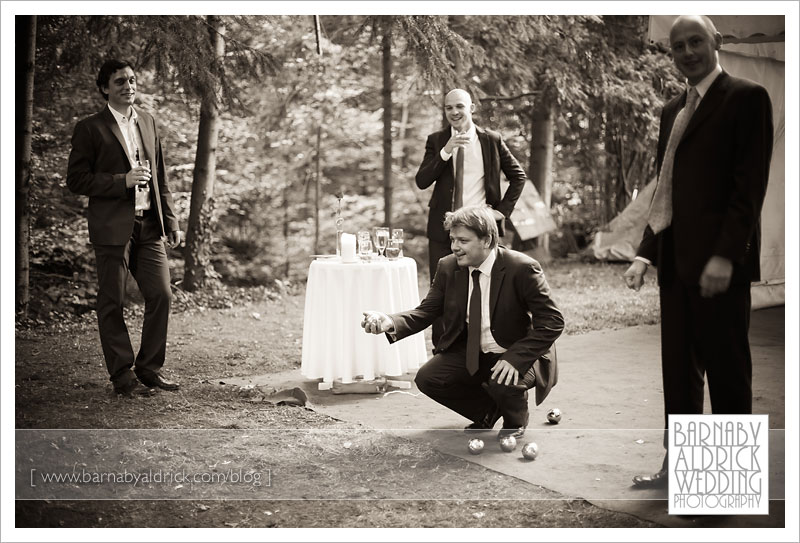 Back at the mill, the reception was in full swing.  Literally, with a game of patonc (boules) 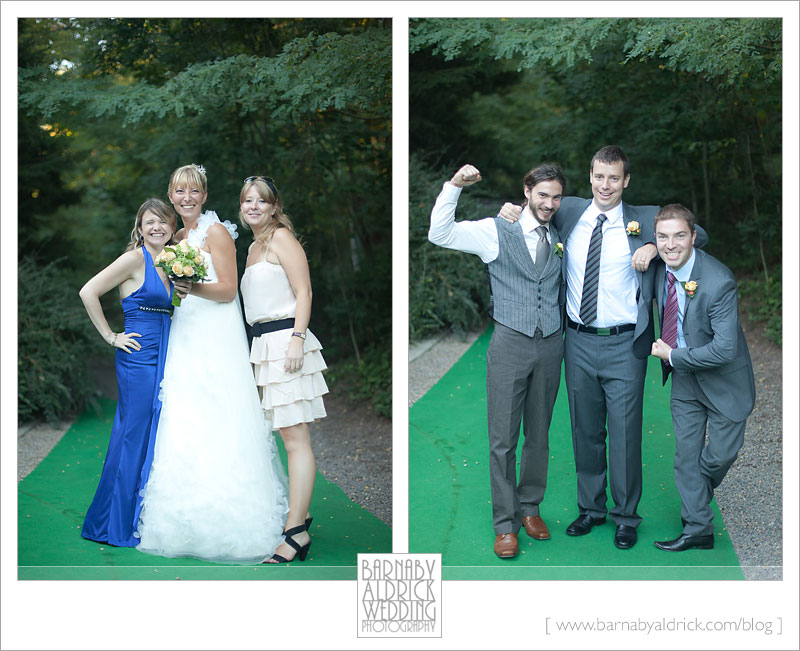 A couple of informal groups 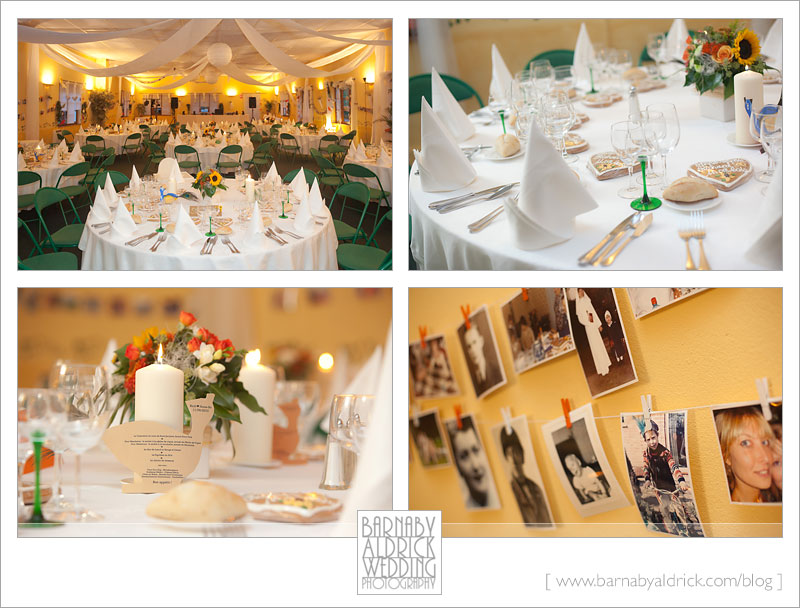 The evening reception all setup & ready.  I’d helped hang the drapes from the roof the day before.  They’re harder to hang than they look!

I liked the lines of endless pictures of their friends and life hanging around the room. 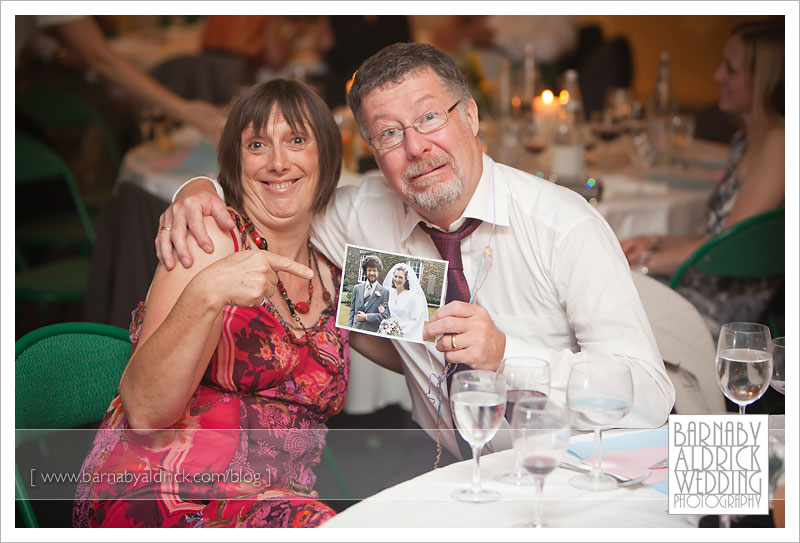 We were particularly impressed with the girth of Rich’s dads afro in his wedding photo! 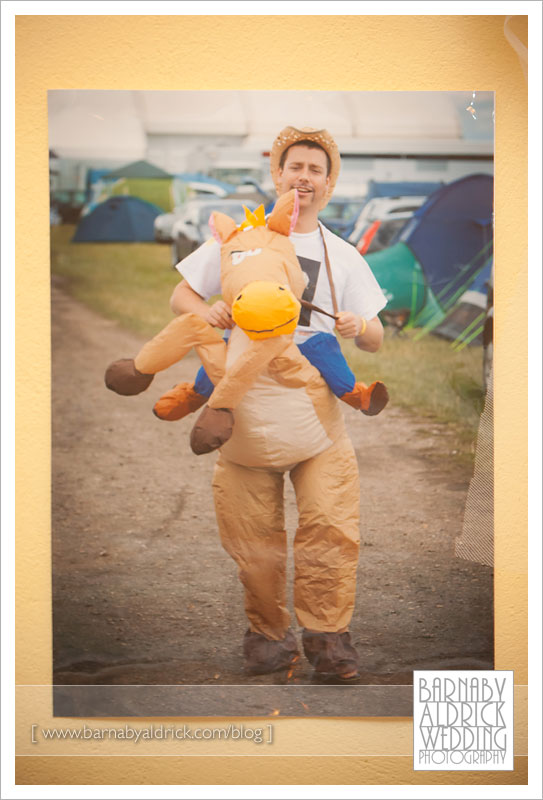 One of the witnesses also blew up & postered a fave pic from Rich’s stag do. 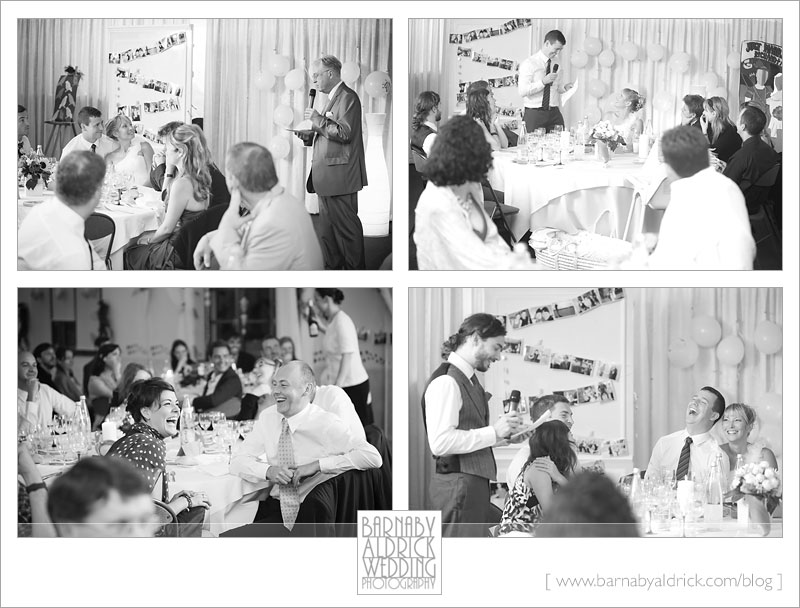 The speeches were great, in English and French 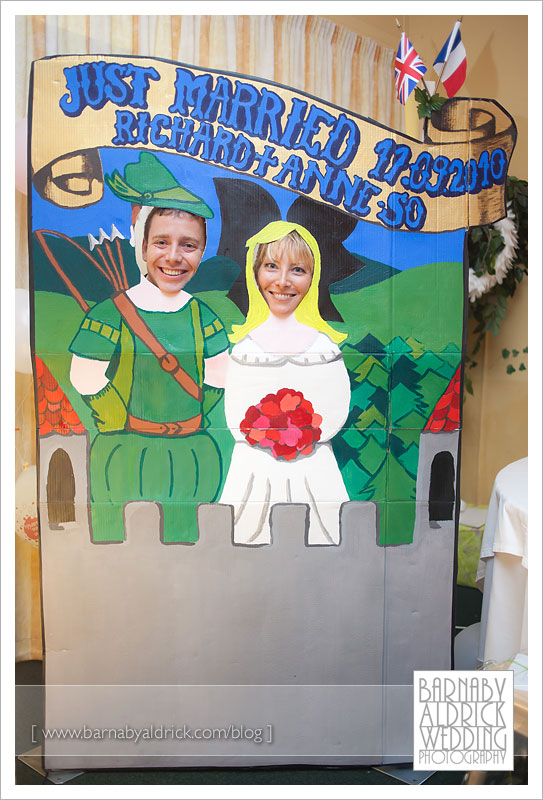 Their wedding invite had this image on it, so Ann-So’d lovingly painted a lifesize replica. 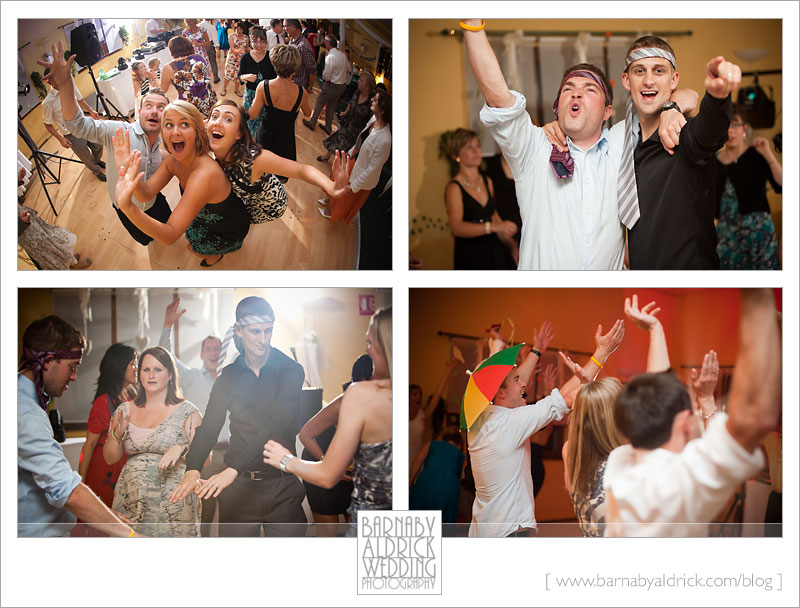 As I’d spent a few days with these kids & made some great new pals, it was easy to snap them getting involved.

Their delicious 7+ course meal was punctuated with quizes, speeches & the first dance, and didn’t officially finish till 1am when the cake ‘Chariot’ was wheeled out covered in fireworks.  I then put down the camera & tucked into the desert wine & hit the floor.

It was an absolute pleasure joining Anne-So & Rich for their wonderful French wedding!

I’ll get their images to them soon, and we’ll host a client area for guests for their finished images, but in the meantime I hope they enjoy Mauritius!