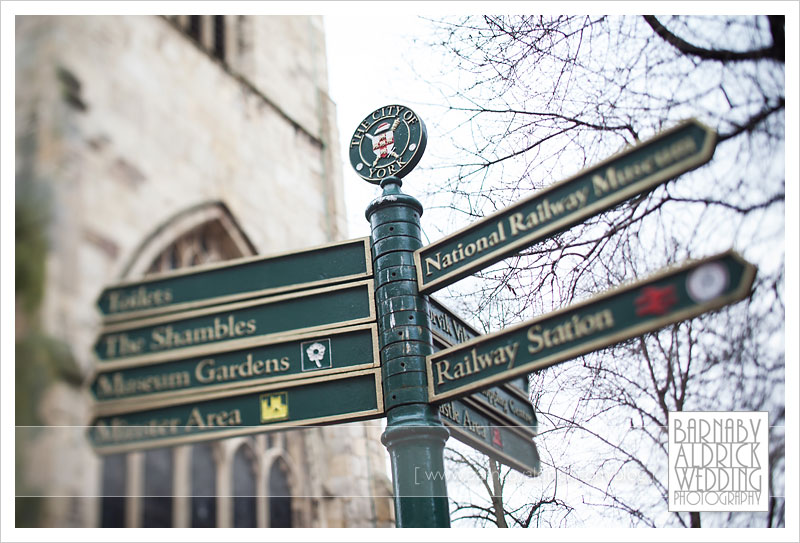 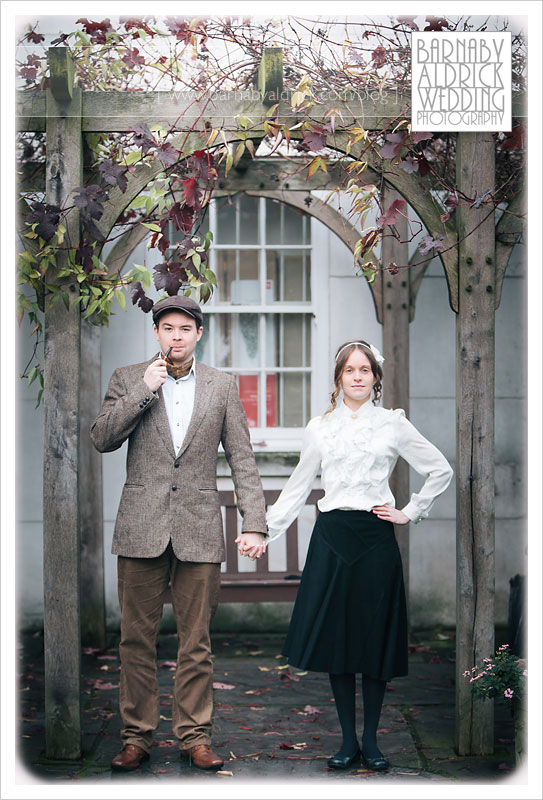 I was there to meet these snappy kids, Kev & Sarah! 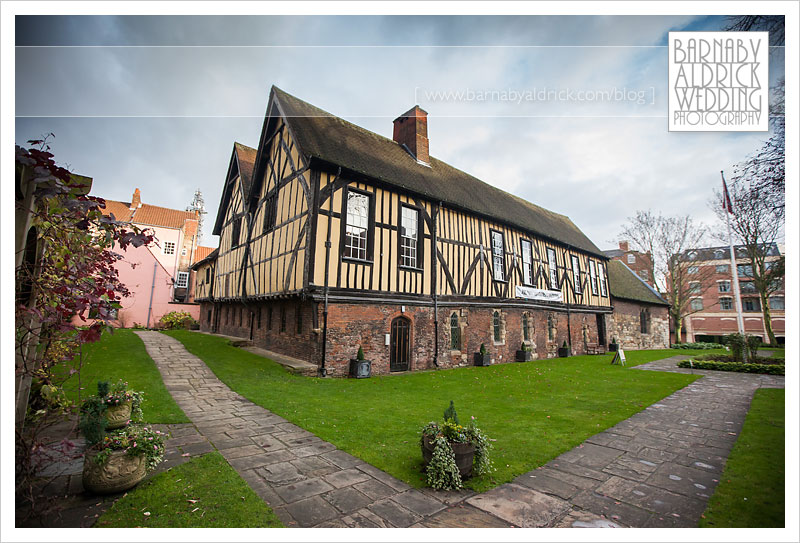 They’re getting married this weekend at The Merchant Adventurer’s Hall, an ancient medieval guildhall in the city of York. 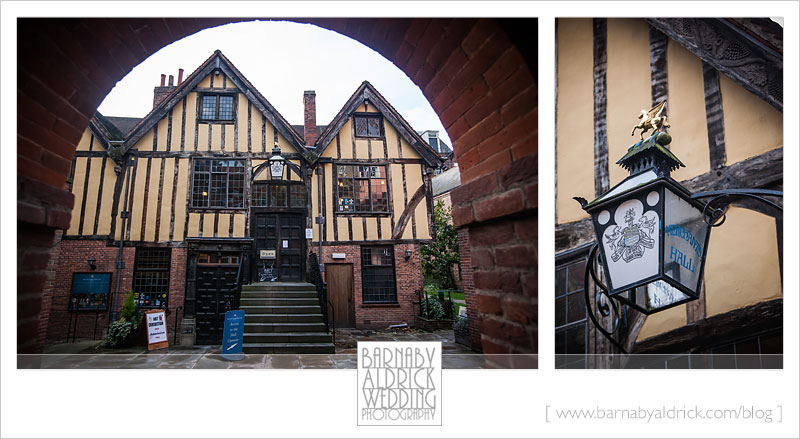 Although I’ve photographed at a good few of Yorks ancient wedding venues (The Hospitium, The Merchant Taylor’s Hall, Bedern Hall & St William’s College, for example), I’ve not yet had the pleasure of photographed here, so was rather excited to take a snoop around!

Turns out, The Merchant Adventurer’s Hall was one of the most important buildings in medieval York.  Built in 1357 by a group of influential men and women who came together to form a religious fraternity, and who were in the 16th Century Royally granted the status of ‘the Company of Merchant Adventurers of York’. 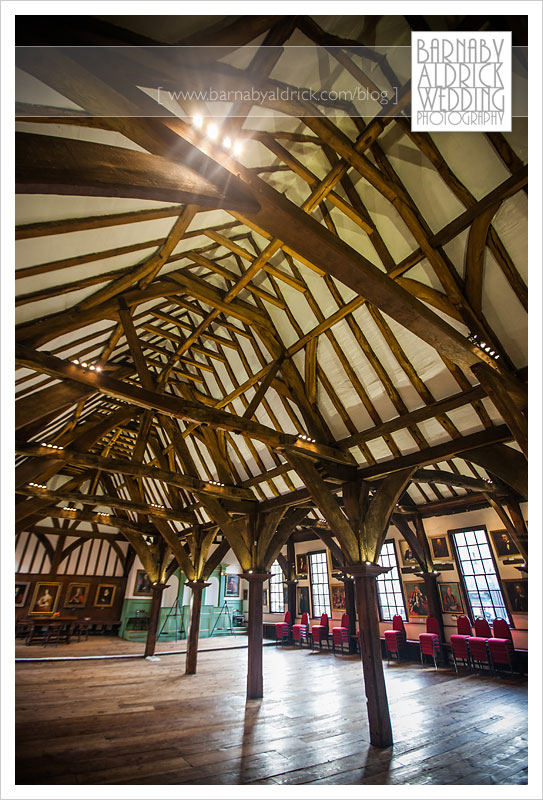 The main rooms in the building are the Great Hall and below it, the undercroft (originally a hospital for the poor people of York).  The Great Hall is the largest timber-framed building in the UK still standing and used for its original purpose. 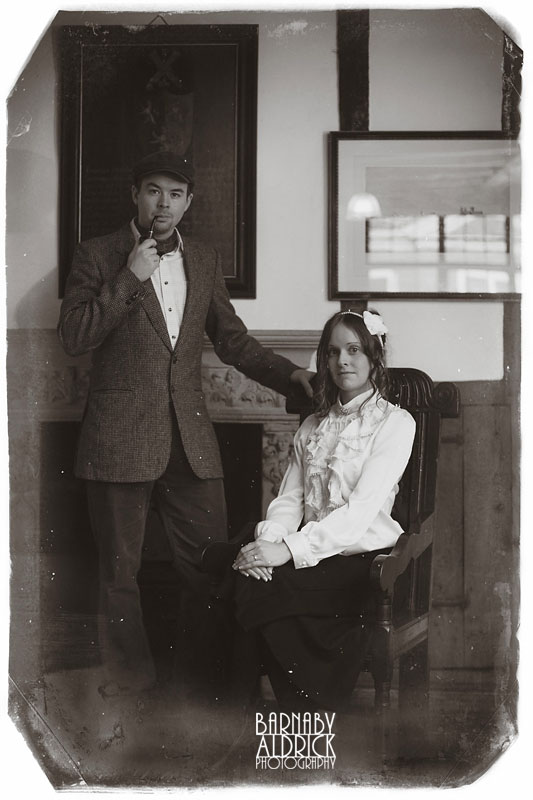 It was a brilliant surprise when these two turned up in period dress!

(Remember – smiling in Victorian photographs was considered bad form. No funny business, if you please! ) 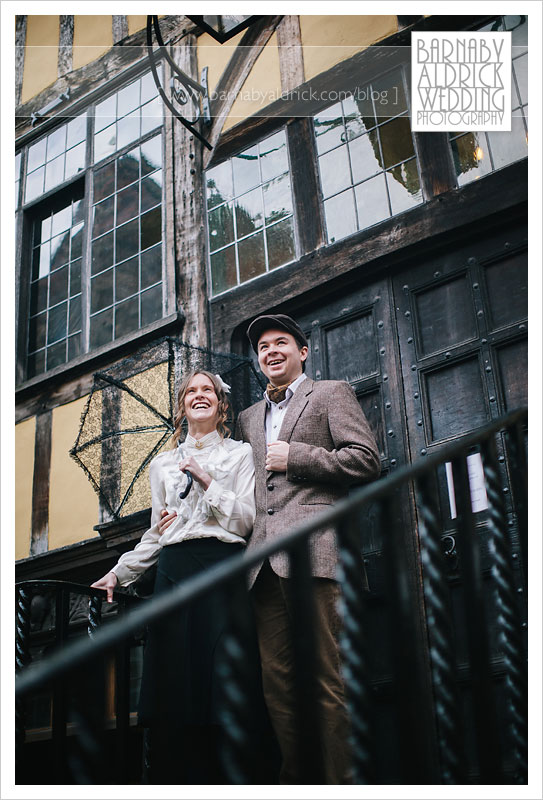 Though it’s quite hard to keep that up!

The reason for the outfits was because Kev & his boys all got dressed as Victorian gents for their stag, so they thought it’d be fun to reuse the costume theming for the pre-wed!  I always encourage couples to make the most of their pre-wedding practice photo-shoot, and to think about what they wear. 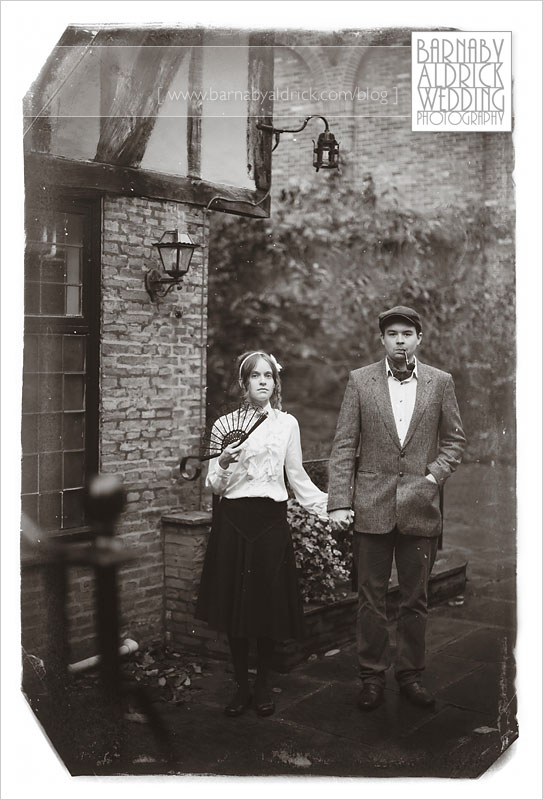 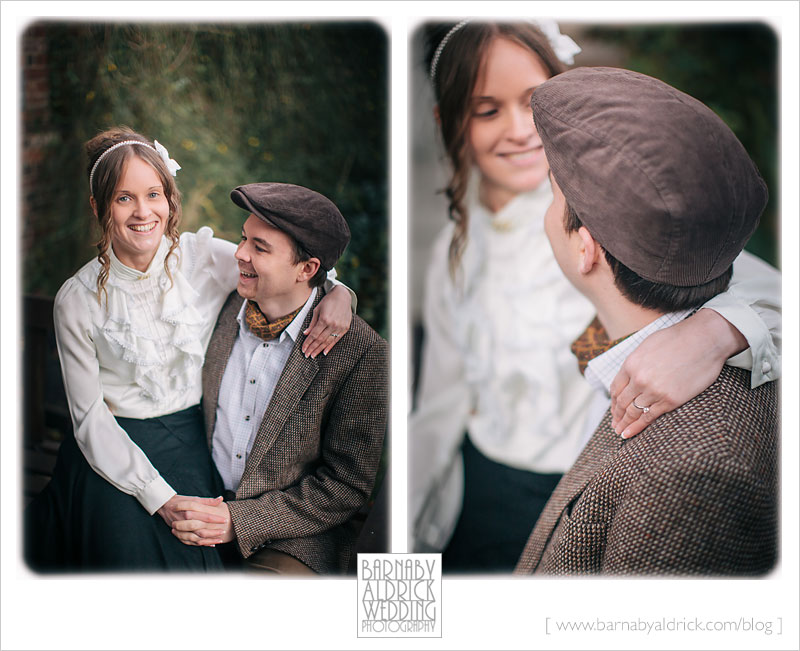 I always do a pre-wed with all my couples to help them get used to being photographed. 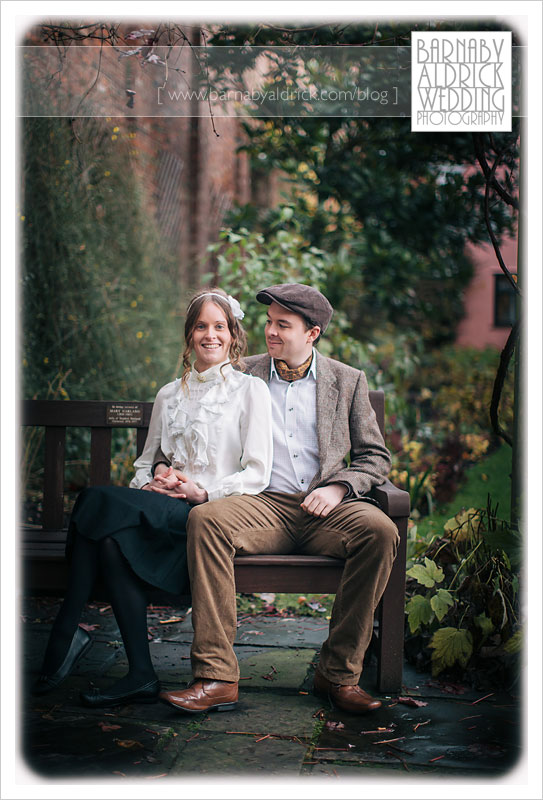 That way I show them not only what I expect from them and how it feels to get shot, but how great they can look, however they feel about being photographed! 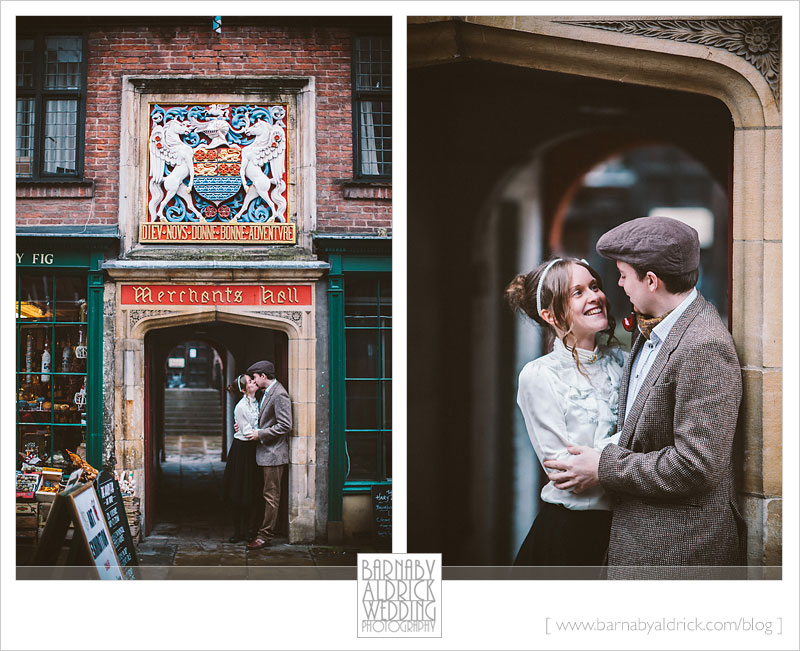 After exploring the grounds of the Hall I thought we’d take a turn out of the grand back entrance to the Hall onto the ancient streets of York. 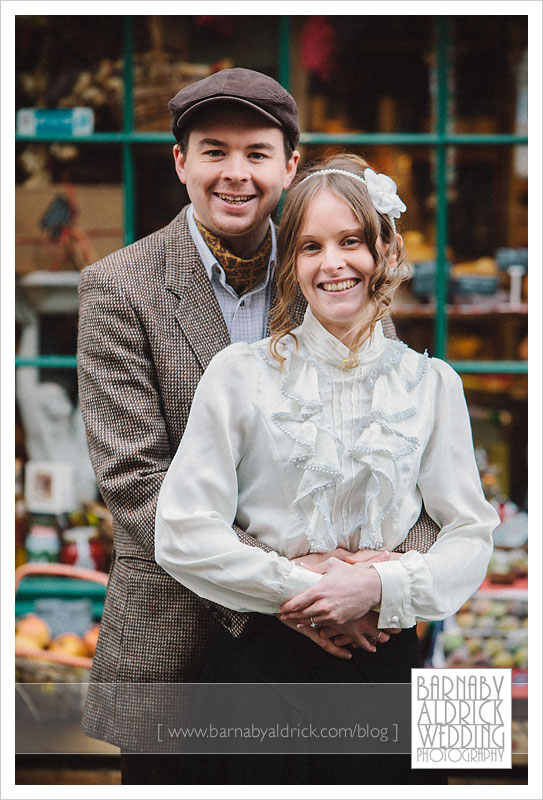 Look at these guys!  Don’t they look ace. 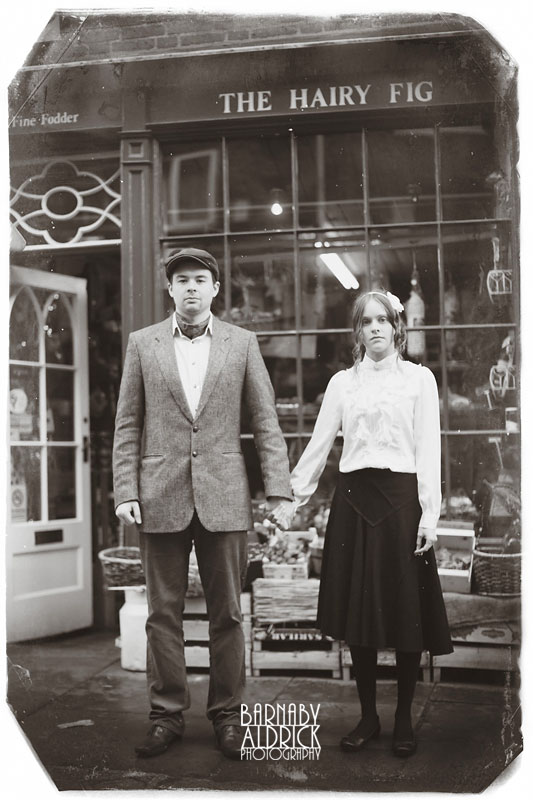 For this one I liked the idea of those Daguerrotype photographs of shop owners standing proudly in front of their stores. 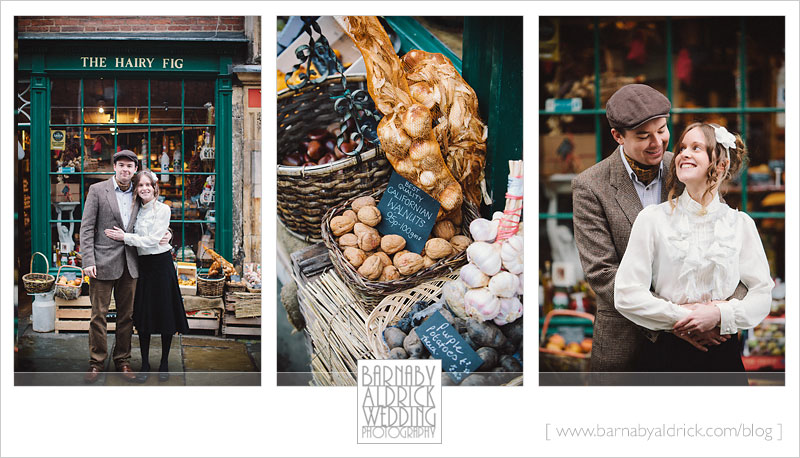 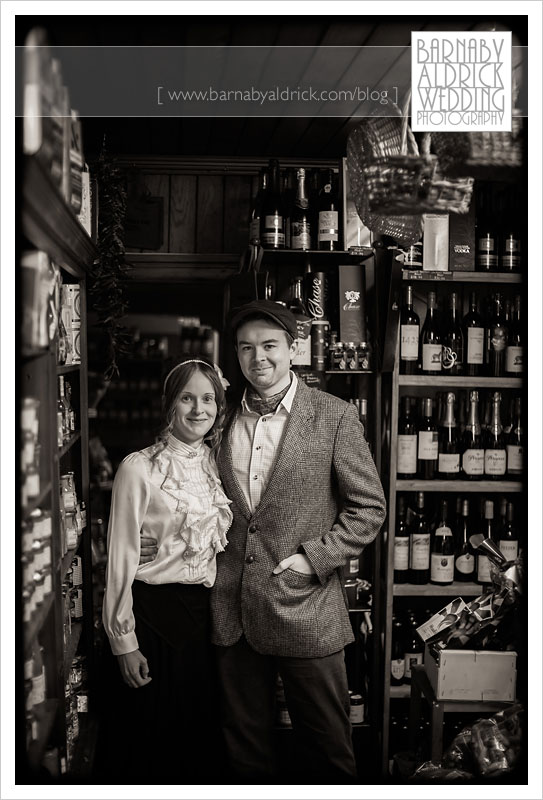 The owner of the shop even let us do a few pics inside! 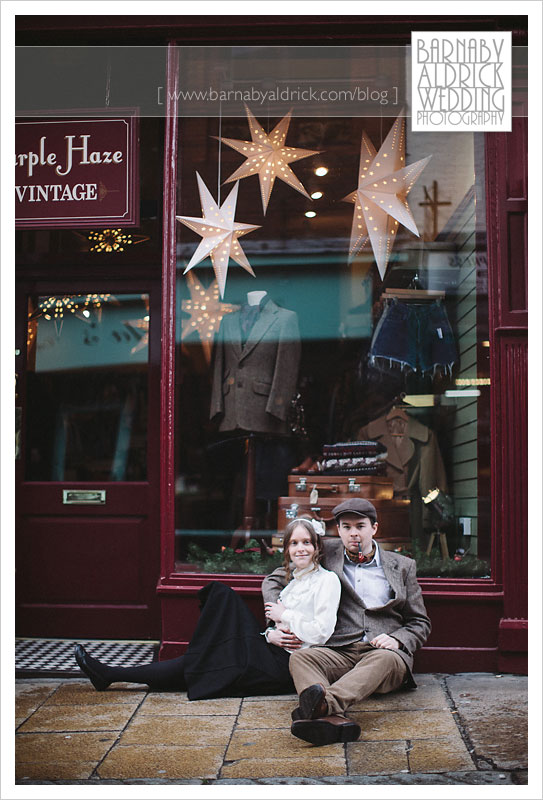 A little further up the road I liked the idea of sitting outside this vintage shop. 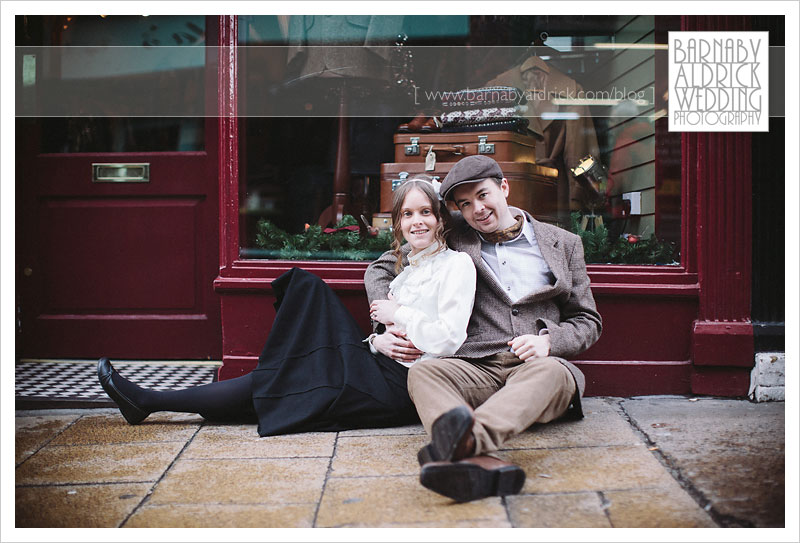 Nice to have willing volunteers! 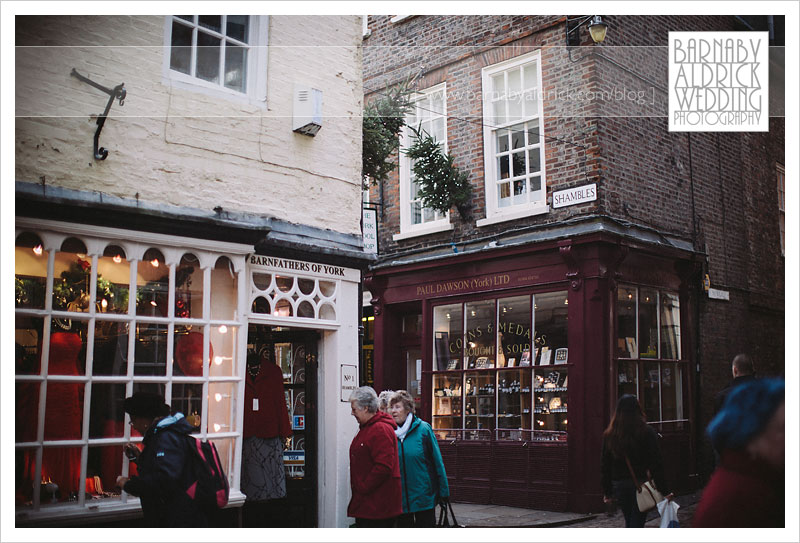 As it’s literally 2 minutes walk, it seemed wrong not to do a few photos on York’s famous ancient, narrow street ‘Shambles’ (not ‘The Shambles’ apparently)

The name comes from the fact that it was once a butchers row called as ‘The Great Flesh Shambles’, thought to be from the Anglo-Saxon ‘Fleshammels’ (literally ‘flesh-shelves’).  The word ‘shammels’ is the word for the shelves that butchers used to display their meat.  Plus, if you look carefully, you can still see some of the meat hooks on the overhanging buildings, from which butchers once displayed their wares!

Further, back in the day when there were no sanitary facilities or hygiene laws like today, guts, offal, and blood were thrown into a ‘runnel’ down the middle of the street and this can still be seen here!  By extension, any scene of total disorganisation and mess (like the middle of a skanky medieval butcher’s row, is commonly referred to as, “a shambles”. 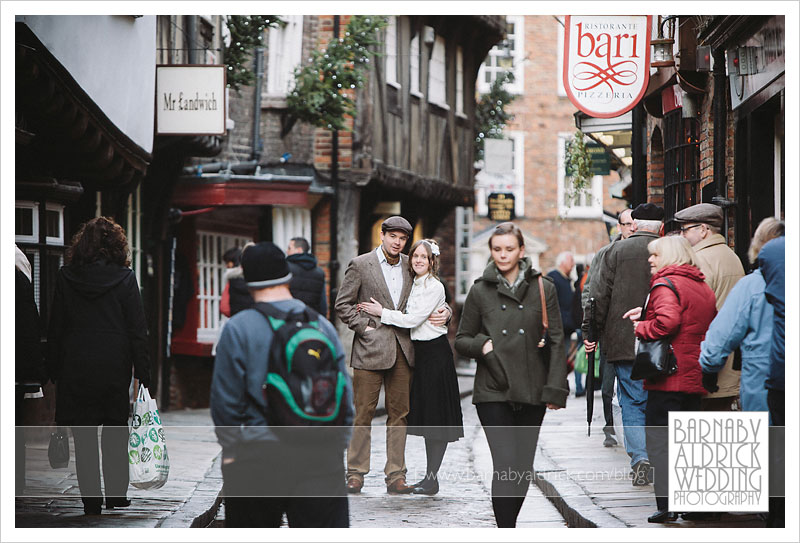 It’s a great spot for standing a posing while the busy passers by, er, pass by. 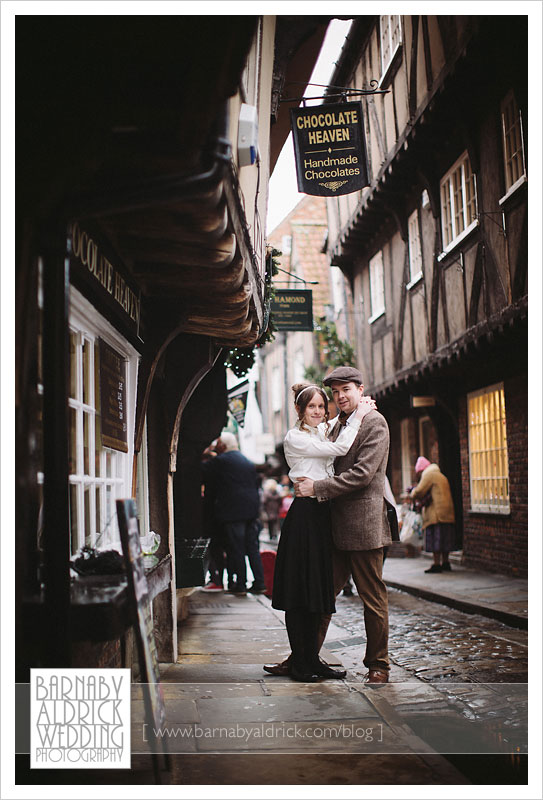 Some of the overhanging medieval timber framed buildings dating back as far as the fourteenth century! 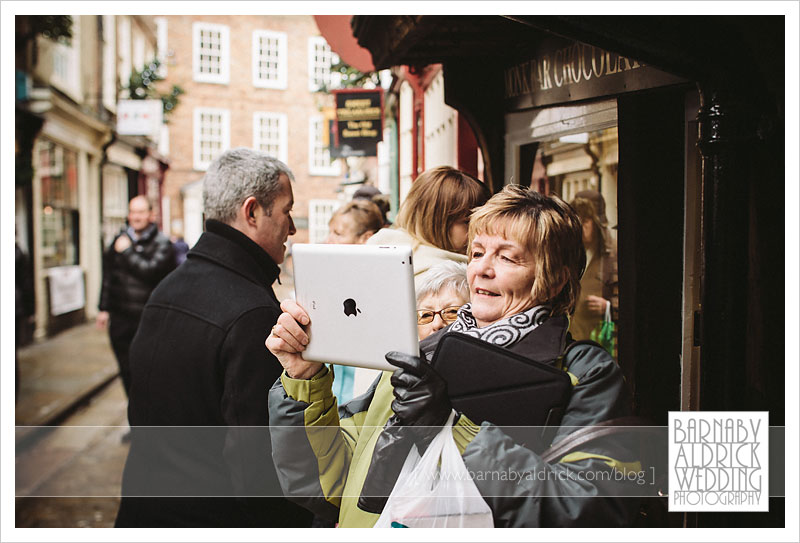 This characterful street is always packed with tourists, and our little shoot caught the attention of lots of passers by!

Loads of peeps were taking photos and we could’ve made a mint if Kev had popped his flat cap down. 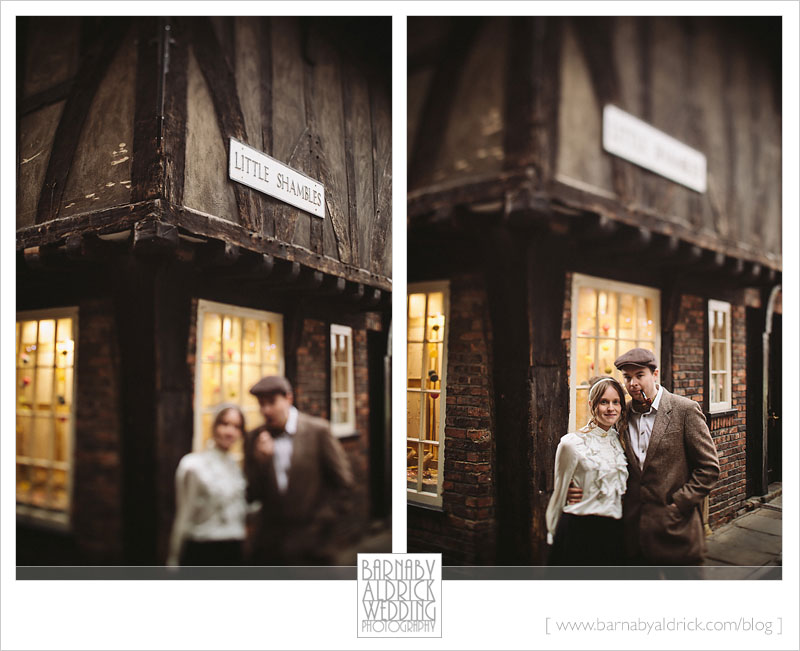 I’m also starting to get the hang of my fun new 45mm tilt-shift lens (which is best to manually focus in Live-View mode), so have started taking it along with me in the camera bag. 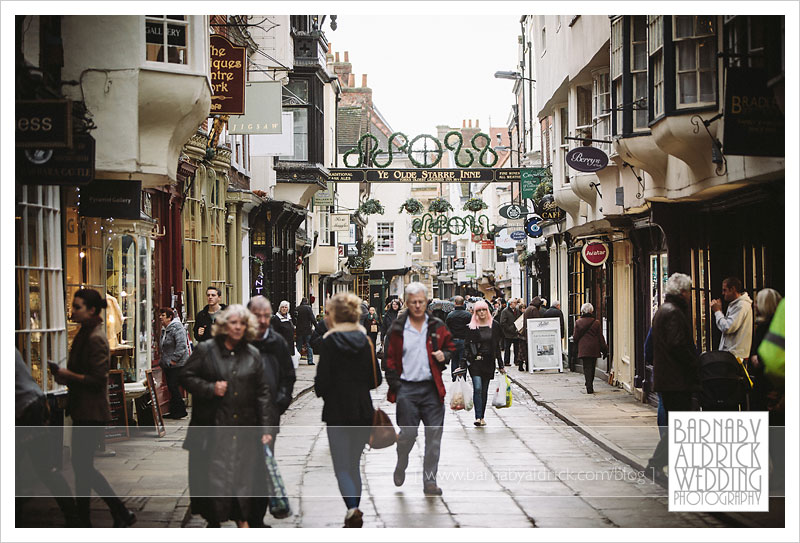 York rules!  Leeds (where I live) is a brilliantly cosmopolitan city bursting with Victorian architecture; but York’s ancient-ness is always so wonderful to behold. 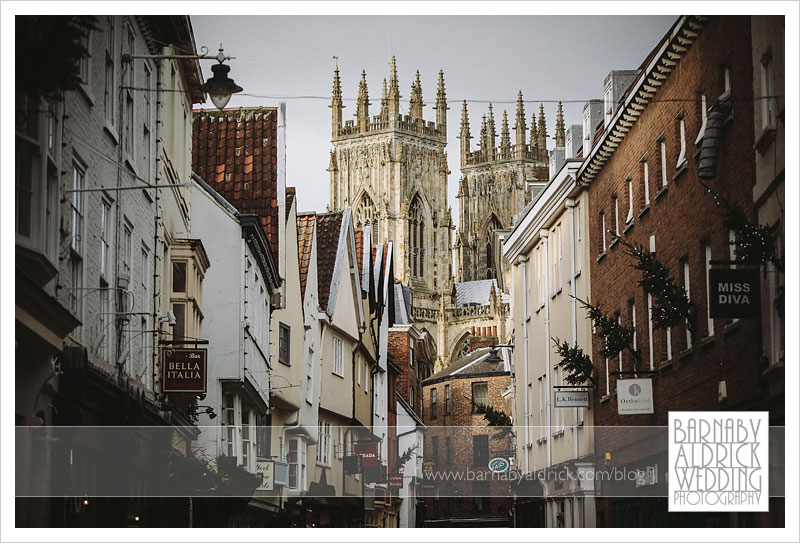 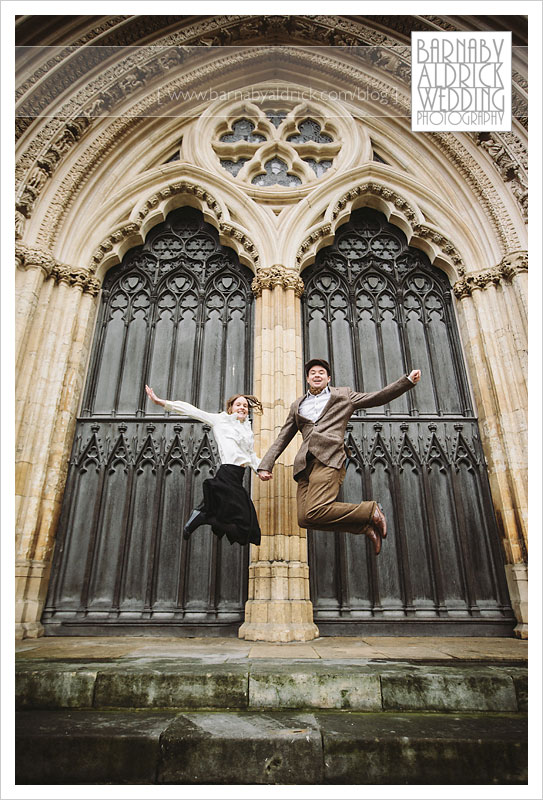 So we hopped over for a few more pics! 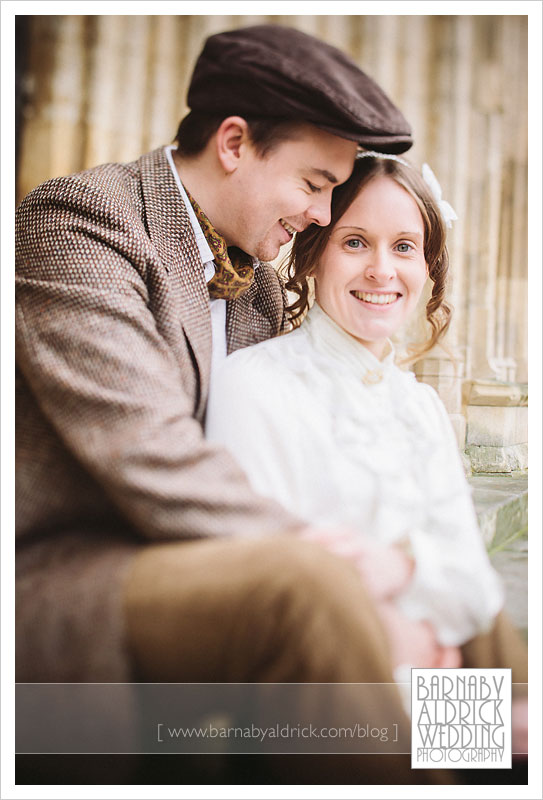 I can’t wait to join these guys for their big day this weekend!

Watch this space on Sunday for their blog of wedding highlights…