I was recently asked along to photograph another Corinne Bailey-Rae gig in Leeds (pics from the last Leeds Academy can be seen here).

This gig was at Left Bank Leeds, an arts and events venue in the former St Margaret of Antioch church in the heart of Leeds’ student ghetto, Hyde Park. 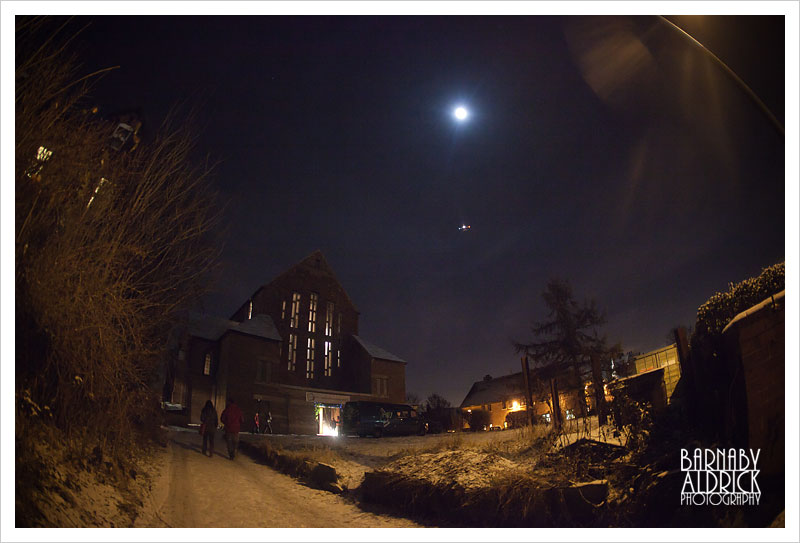 This church has an interesting history, originally dating back to the late 1890’s, and funded by local donations.  The west-end of the church (showing above) was never actually completed, hence looking impressively unchurchlike from this end, and distinctly gothic inside.

However, by the late 80s the church congregation dwindled to just a few and eventually closed, lying disused till the Left Bank team raised funding from English Heritage to repair the fabric of the building and make it into an arts venue.

Since reopening, one of the first things the building was used for in early 2007 was in fact one of my early weddings – for two pals of mine, Liz & Ed. 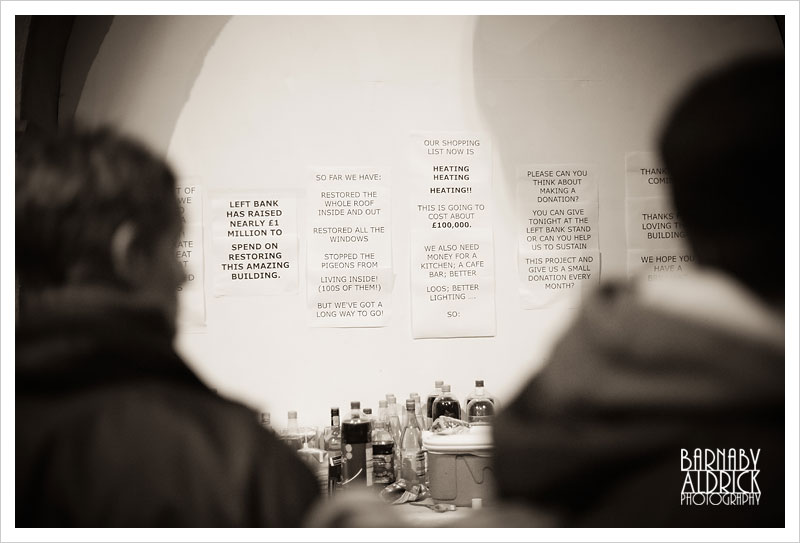 Anyhoos – Left Bank has raised nearly £1million to restore St Margarets and is currently looking to raise £100K to get some heating installed.

At this time of year it’s rather chilly inside 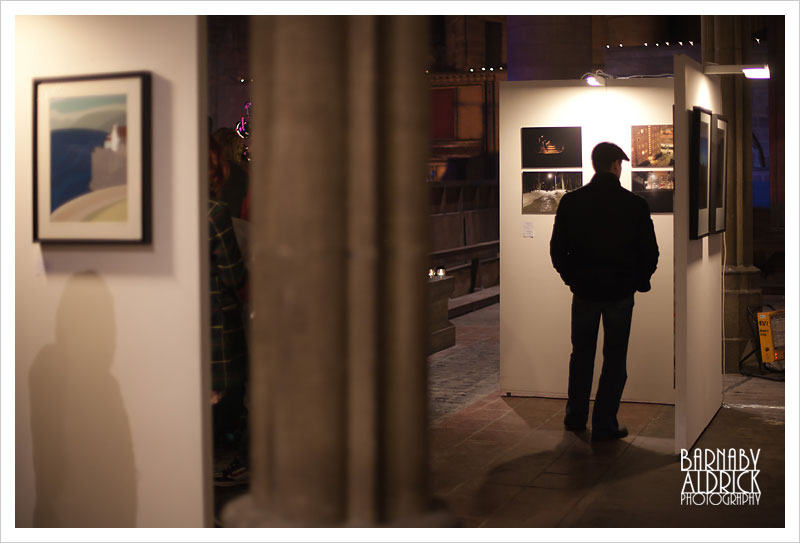 I was asked along, with a good 500 others (with a warning to wrap up warm!) and down we went! 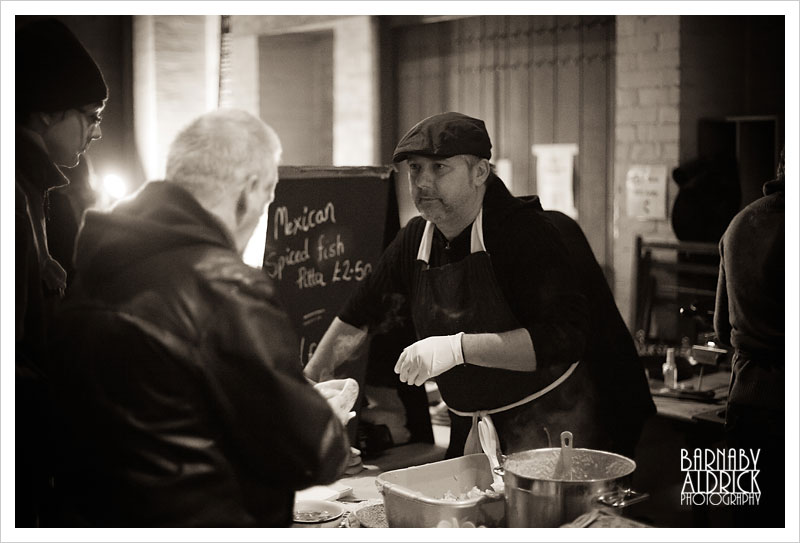 The falafel wraps we could warm up on the mulled wine stove were particularly tasty! 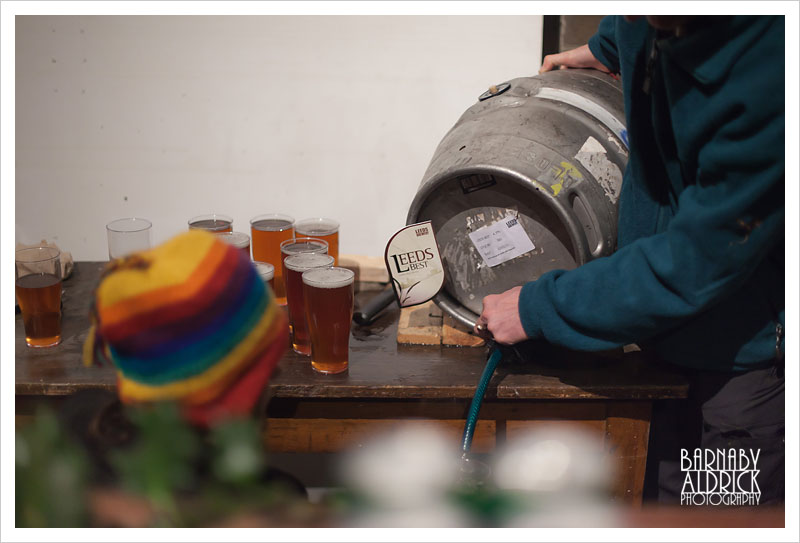 The generous folk at Leeds Brewery supplied a keg of Leeds Best (they also sorted me one for my charity housewarming back in July!) 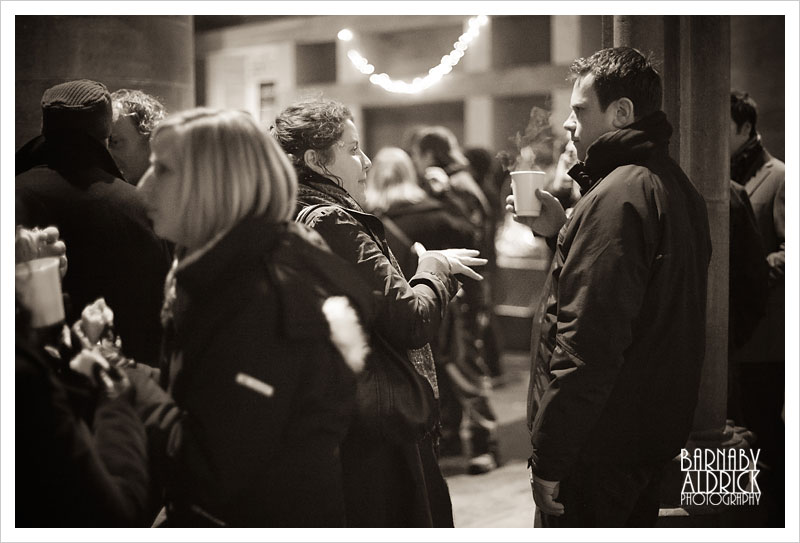 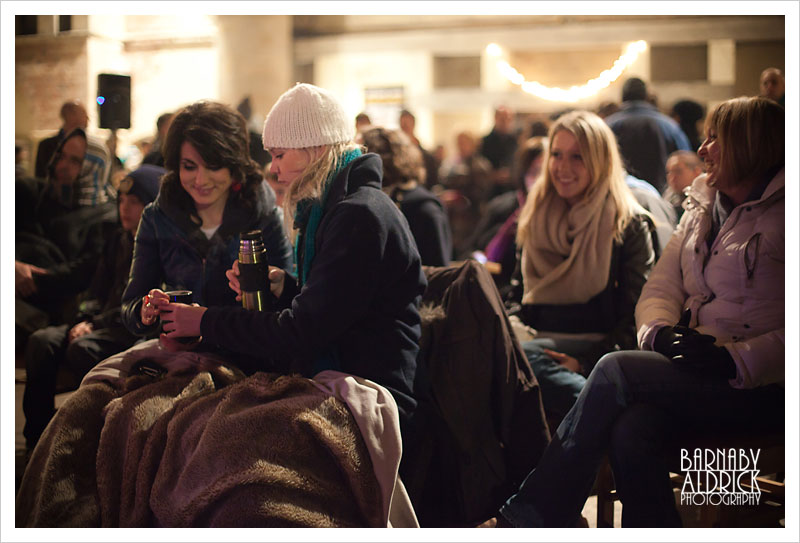 Some forward thinkers brought their own blankets & flasks! 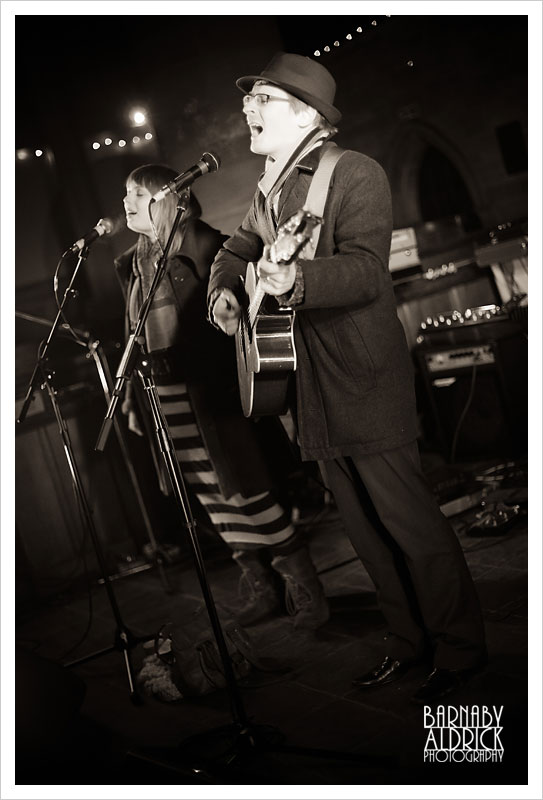 Three bands played that night & first up were my buddies Dan & Emily of Man&Wife.

They’re great & have played my Sunday Service night a bunch of times.  They also wrote the song ‘One in & Million’, covered by ODi, for whom I shot the music video in Arran (behind the scenes post here) 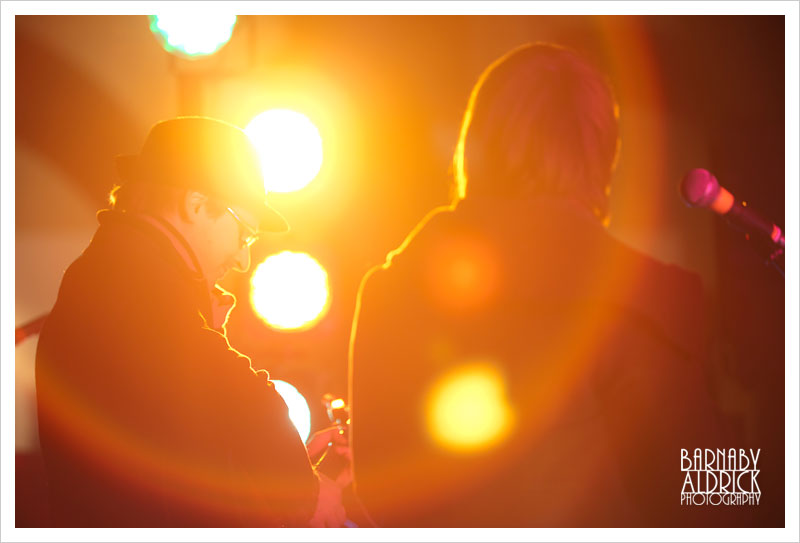 The lights in this place weren’t all that, and it was a challenge getting the most of what was there, but I stalked the stage looking for good light. 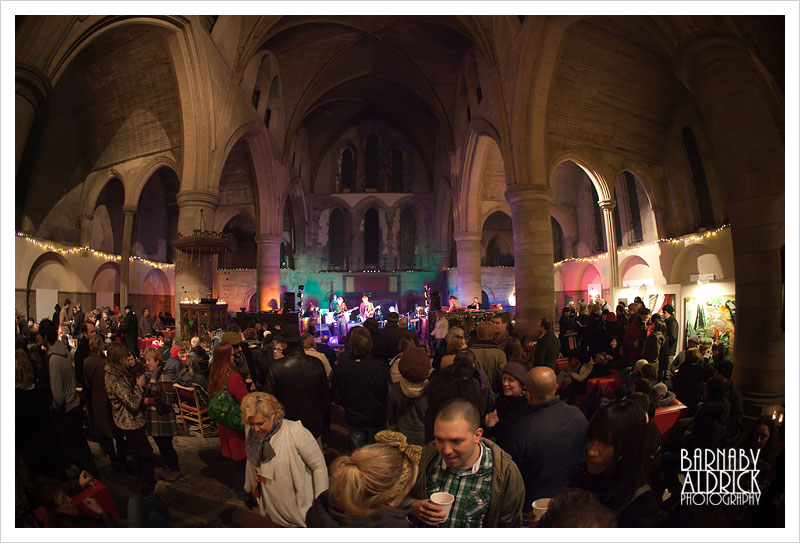 Here’s one from the back showing the impressive space.

It’s a space I’ve got in mind for hosting some cool band nights at in the future. 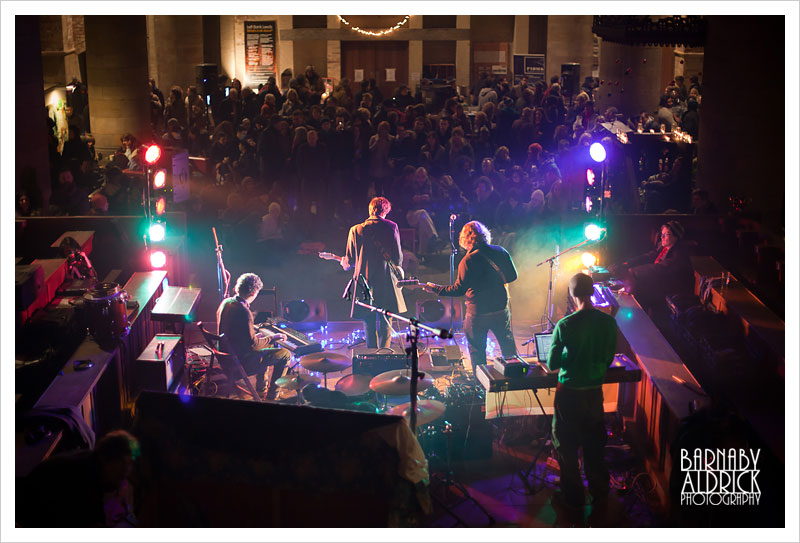 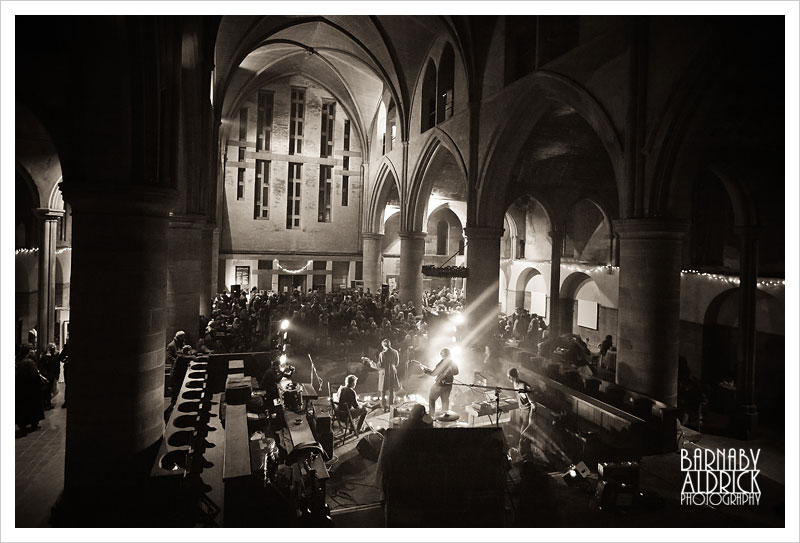 I managed to get access to the stairwells at the back of the building and clamber up for an elevated viewpoint. 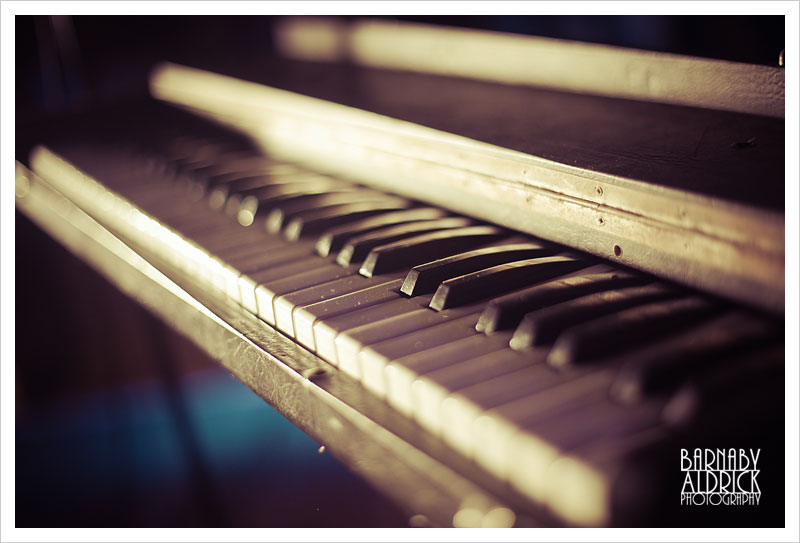 Before Corinne got on I snapped a few of her band’s instruments. 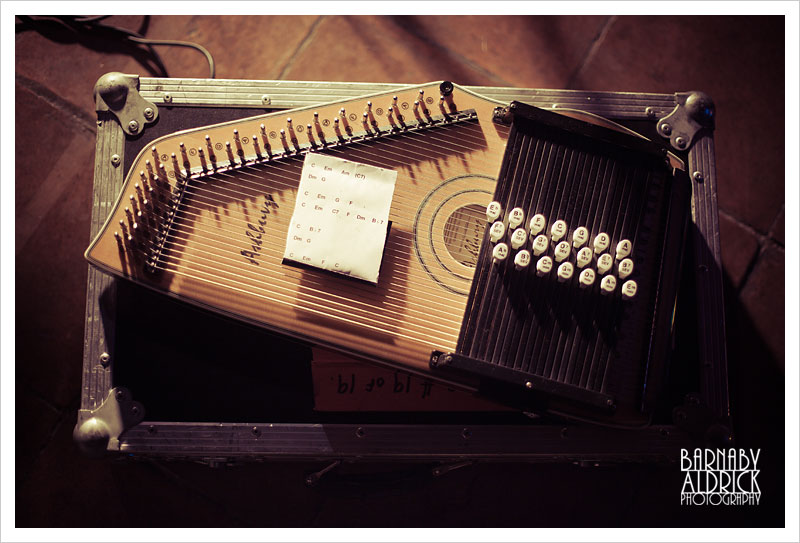 This is one of Corinne’s crazy string instruments.  I got a cool pic of her playing it at the Academy. 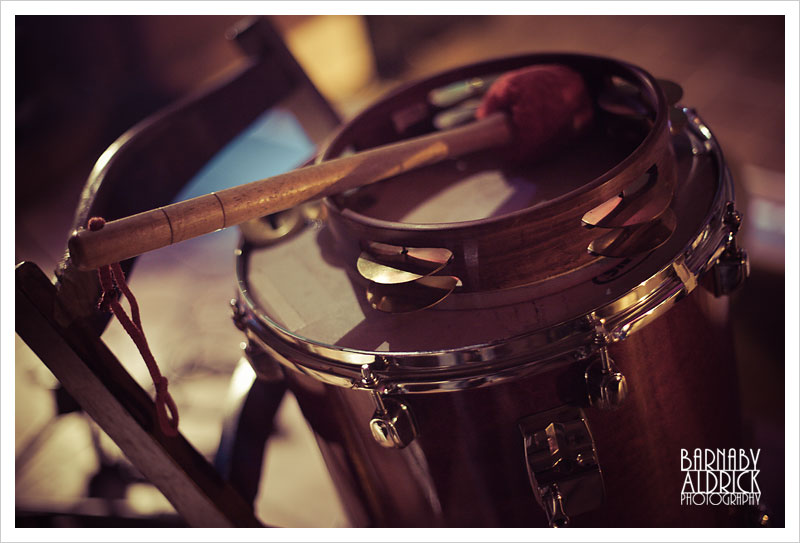 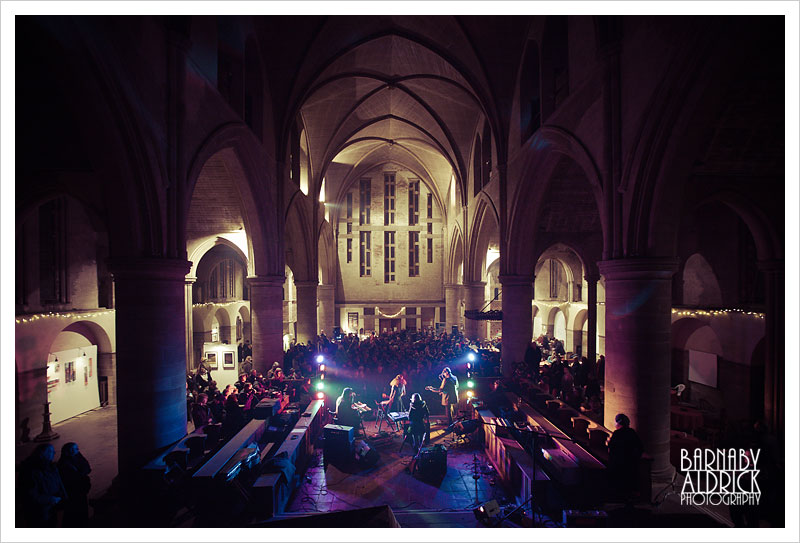 Again, I clambered up on the back balcony, this time with a video buddie of mine, James Rhodes of The Blind Club, who were documenting the night.

It was a collaborative event indeed & I look forward to seeing their D-SLR video footage. 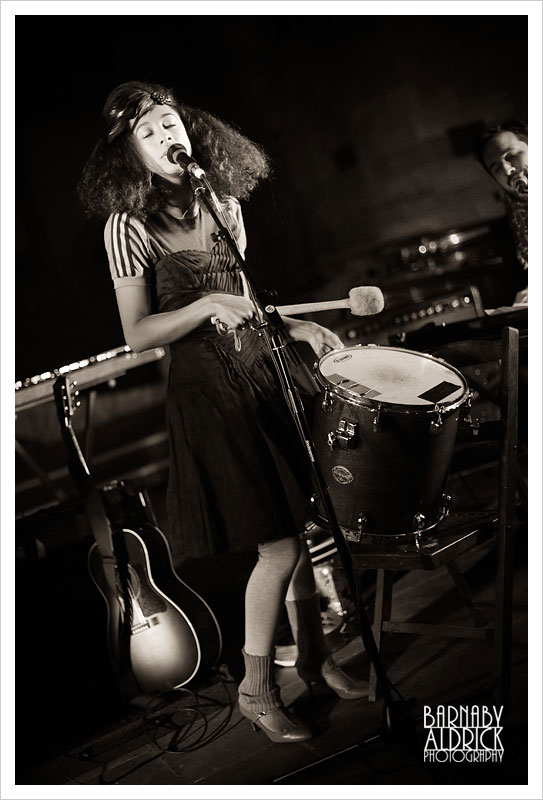 She’s so natural on stage. 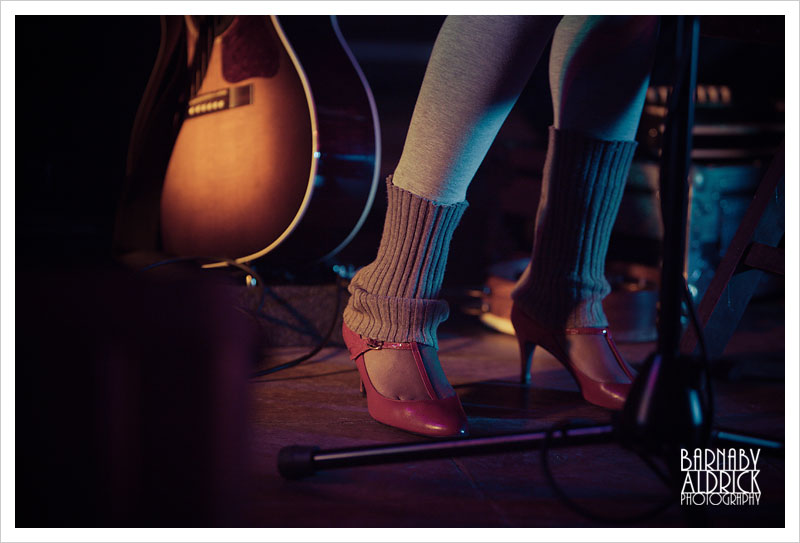 She also planned ahead for the cold! 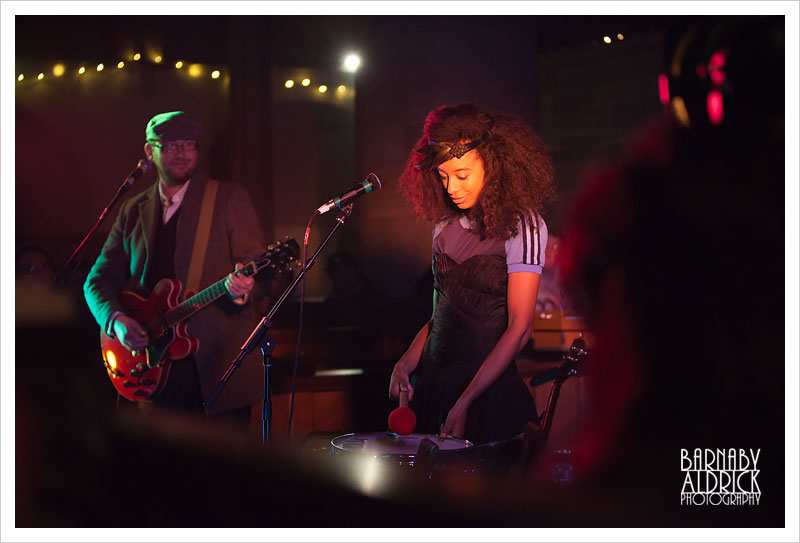 In spite of a lack of light, I love where the light fell on this one. 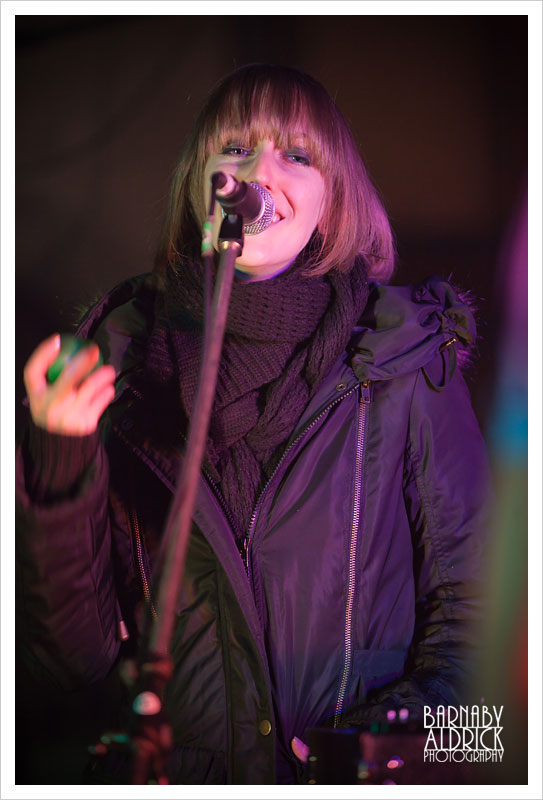 I love how Corinne, who played funk & soul covers around Leeds for years before stardom struck, has on her recent album returned to cherry pick her long-standing local musical all-stars to tour with her on this tour.

This is the lovely Jenny Birch (Corinne’s guitar / obscure instrumentalist), who played with Corinne in their original band Helen.

We could see the potential in this lot back then. 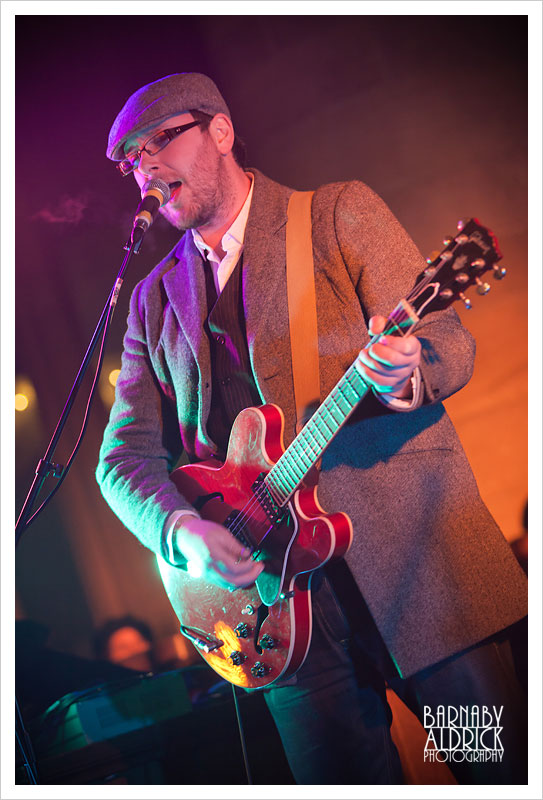 This chap, John McCallum, does an uncanny Stevie Wonder impression. 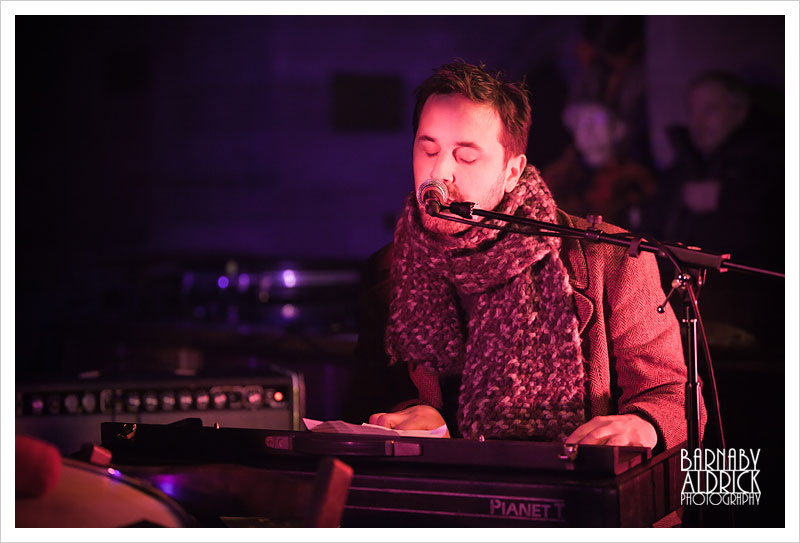 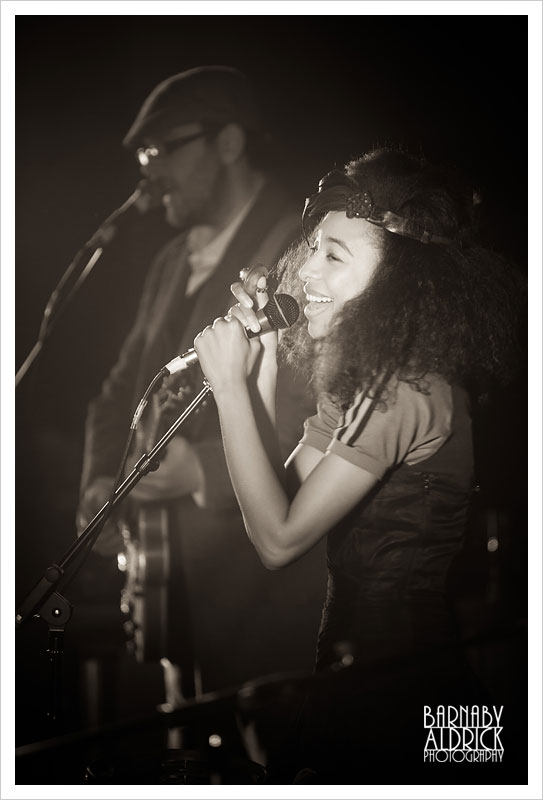 It was a splendid, intimate local gig, free to all as a gift from Left Bank to all those who’ve been involved in or may be interested in the project. 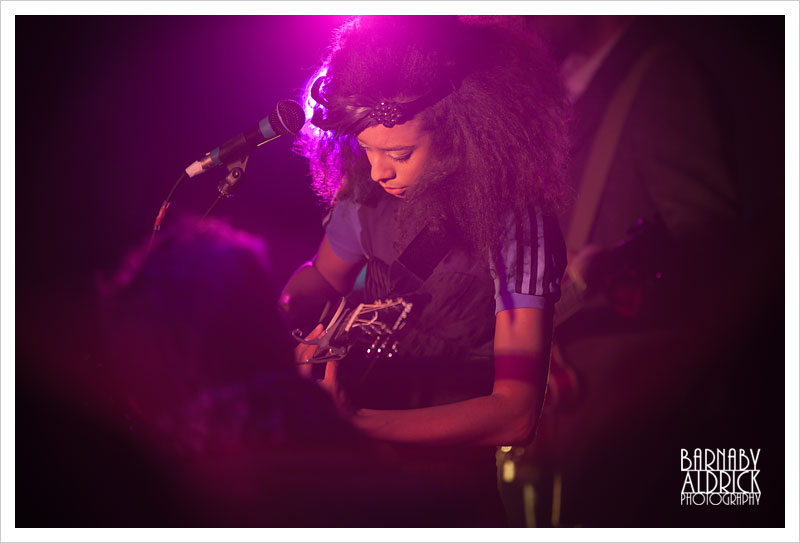 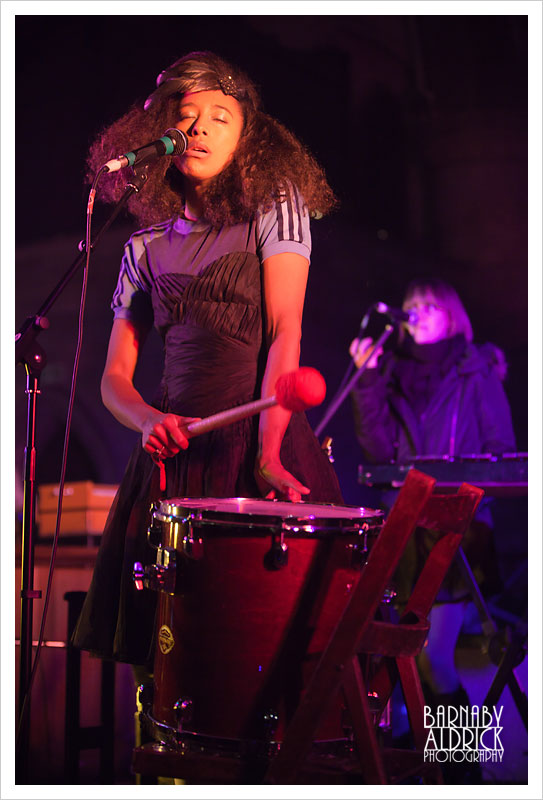 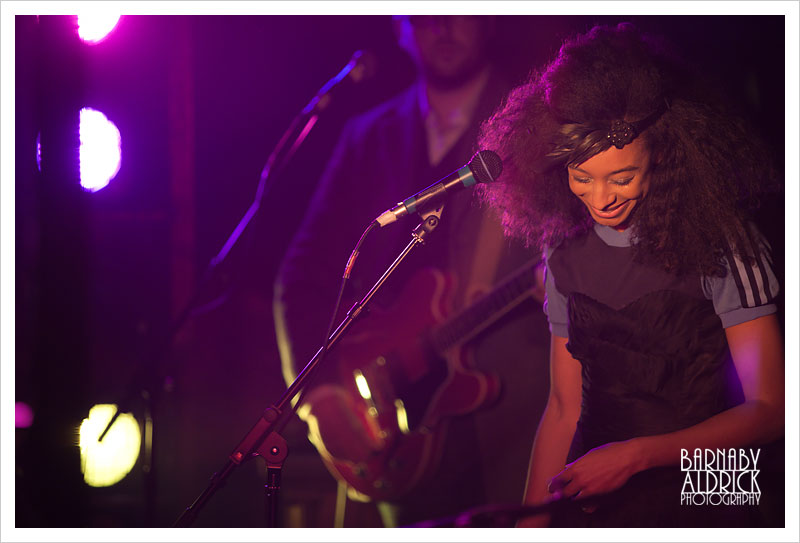 Corinne’s born to be on stage, yet is still impressively humble about the whole thing 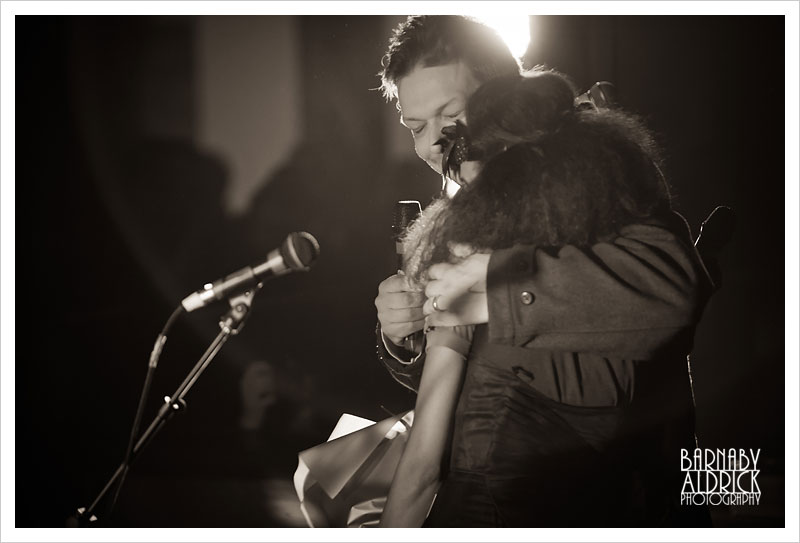 This chap, Simon Hall & his wife Anna are on the Left Bank committee; but it was Simon who encouraged Corinne & many other musicians in our Youth Club to get involved in making music.

The rest, as they say is history.

It was a class night all round – not only to see 3 wicked bands & slurp a bit of mulled wine, but to meet & greet with old friends & new faces.

You’ll no doubt see more of my collaborations with Left Bank here in the future; including the edit of a music video I shot there for rising Leeds star Gavin Mart a while back.

If you’d like to learn more about the cause, or help with their heating project, learn more at www.leftbankleeds.org.uk.