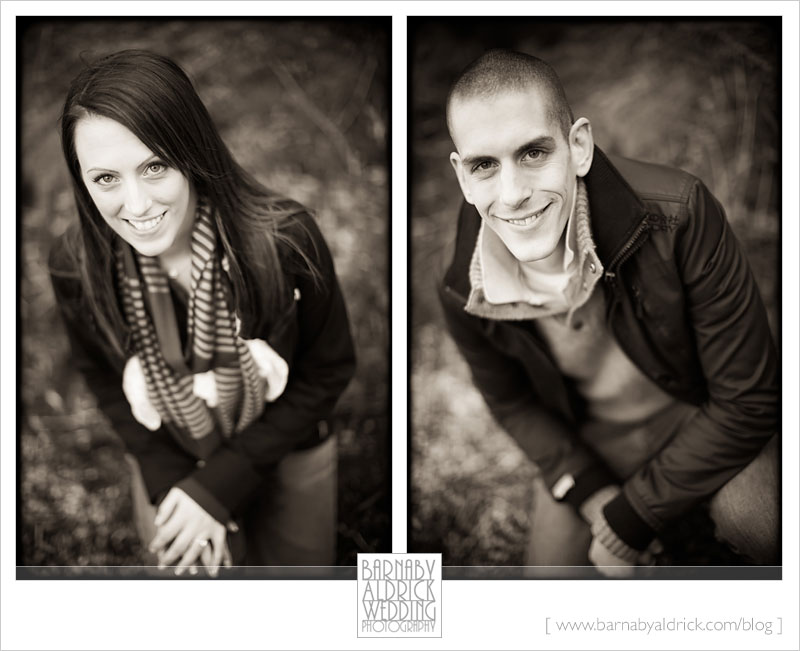 A couple of Saturday’s ago I joined these guys, Emma & Harry for their pre-wedding shoot! 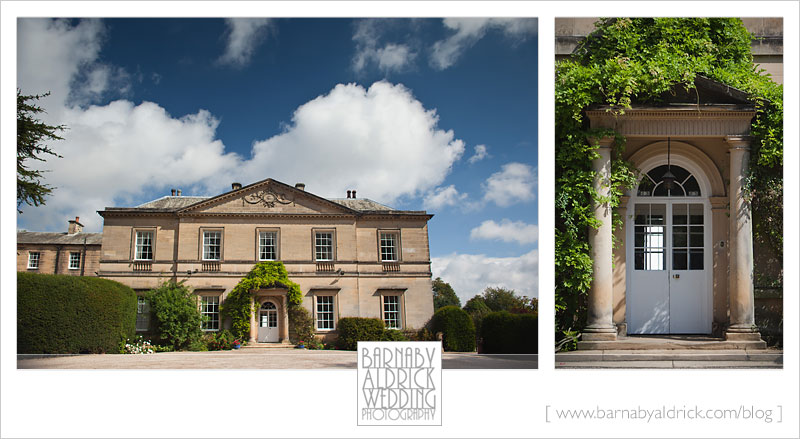 They’re getting married at the charming Middleton Lodge in deepest North Yorkshire, near Richmond! 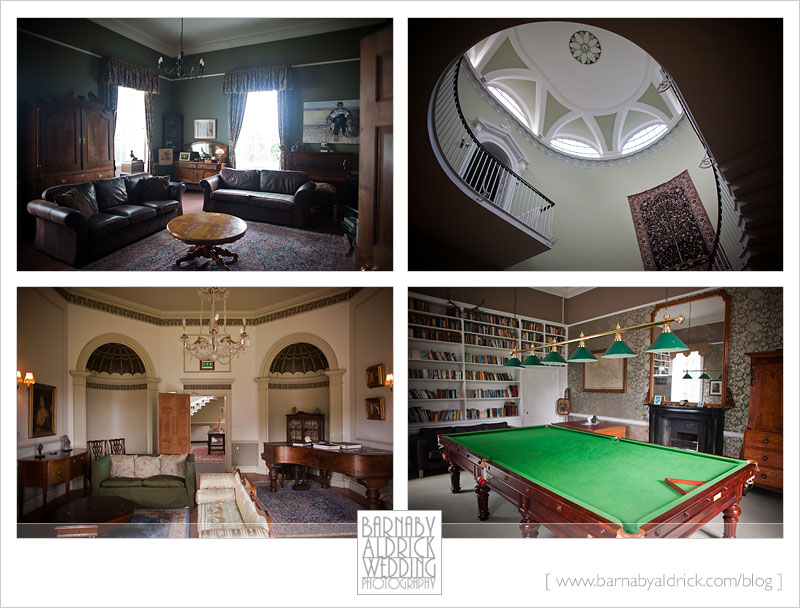 In recent years the family who own the lodge have turned it into a brilliant bespoke setting for a wedding.

One of my favourite things about it is they let each couple have exclusive usage of the place for a full 3 days and 2 nights, to treat as their own! 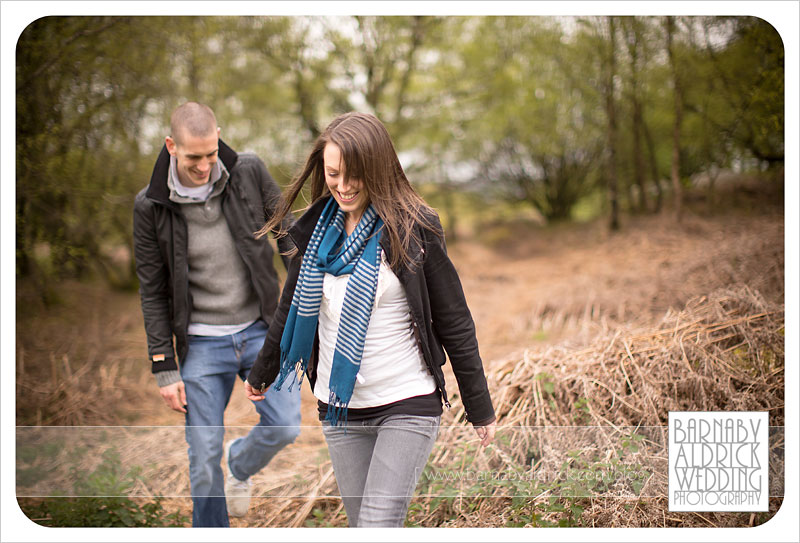 However, Em & Harry decided that as I was familiar with their venue, thought they’d choose somewhere else fun to do their pre-wed. 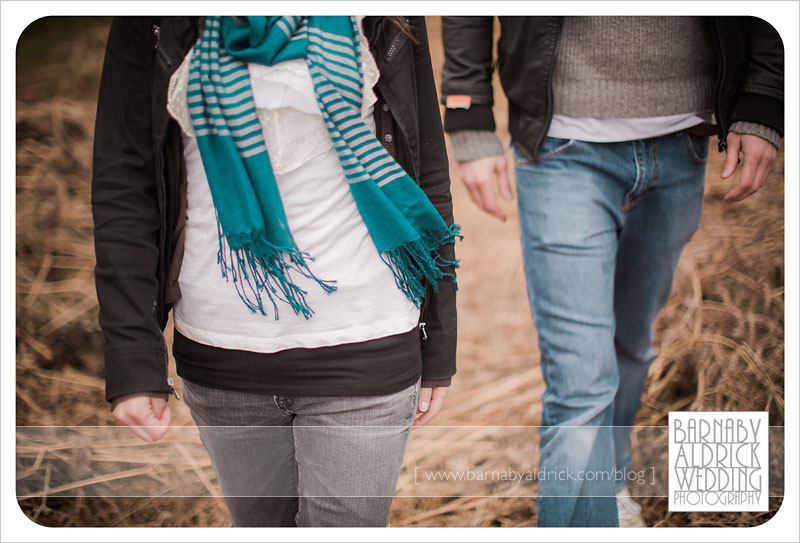 So we met up for a stroll around… 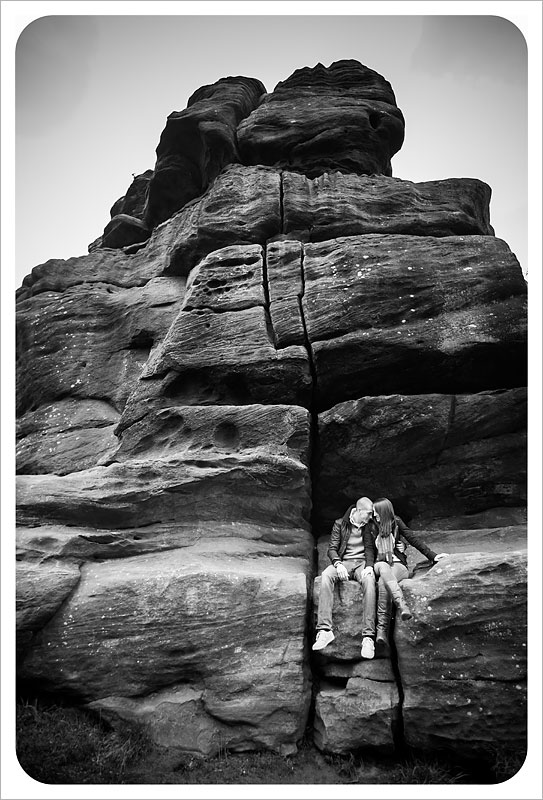 …the dramatic balancing rocks of Brimham Rocks, in North Yorkshire! 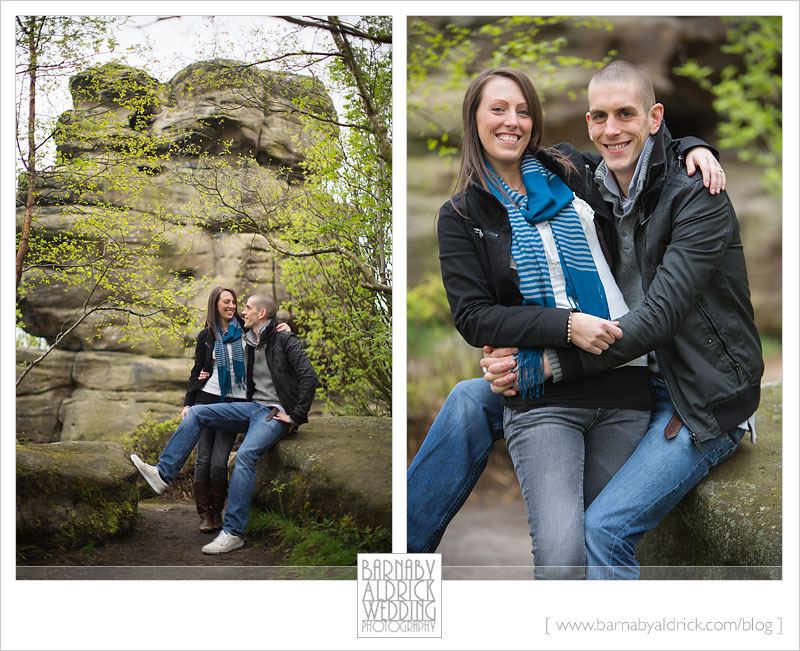 Some of the rocks in this National Trust area of Outstanding Natural Beauty stand almost 30 metres from the ground! 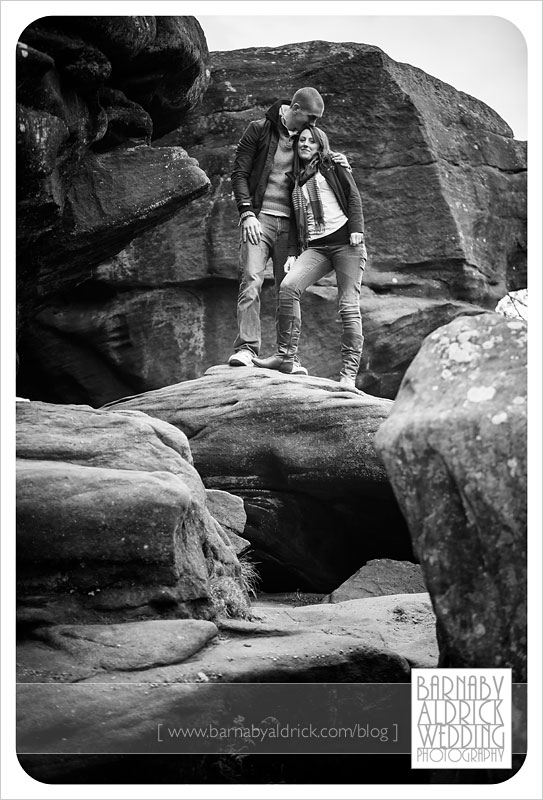 I’ve never shot here before, and only vaguely remember going up as a child.

The amazing Millstone Grit rock formations are a consequence of being eroded by water, glaciation and wind, into weird and wonderful shapes. 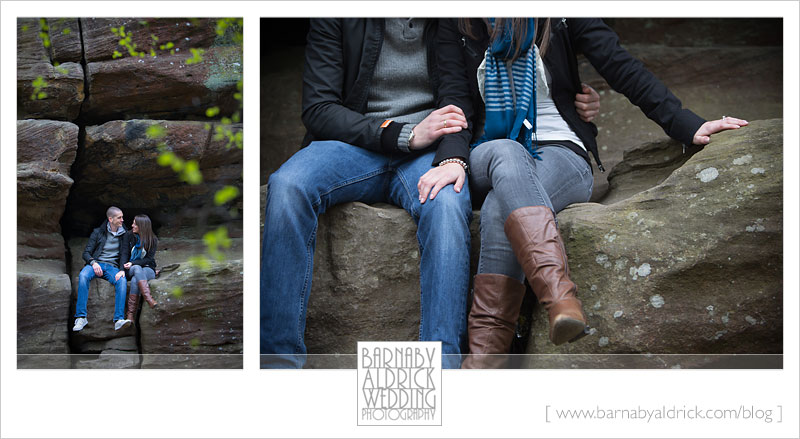 It was great to get back and to scout some cool spots to pap these two. 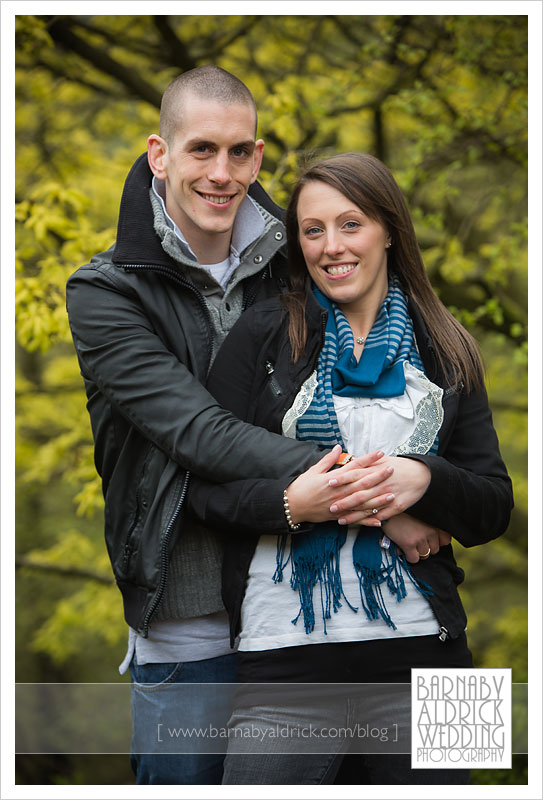 It was also a great op to get to know Em & Harry, as unusually for me, I’d not met them before (we’d only spoken over the phone before booking) 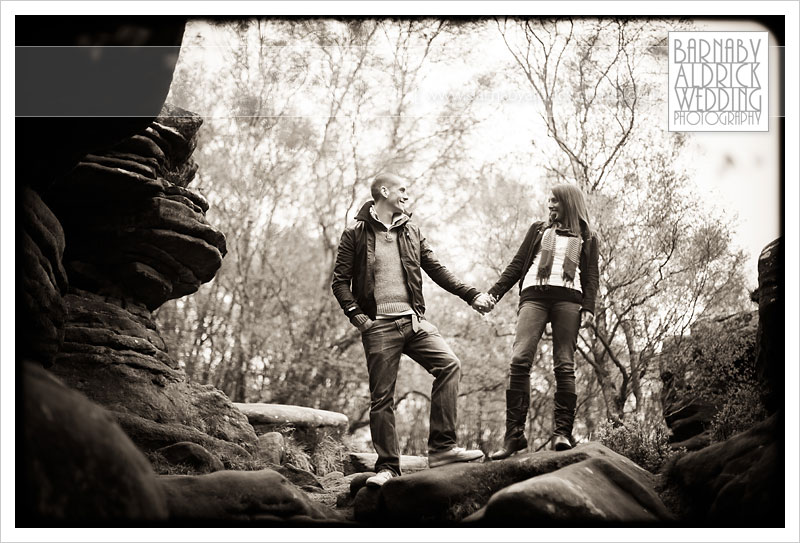 But it was great to see they were easy to photograph and it wasn’t long before they started enjoying themselves! 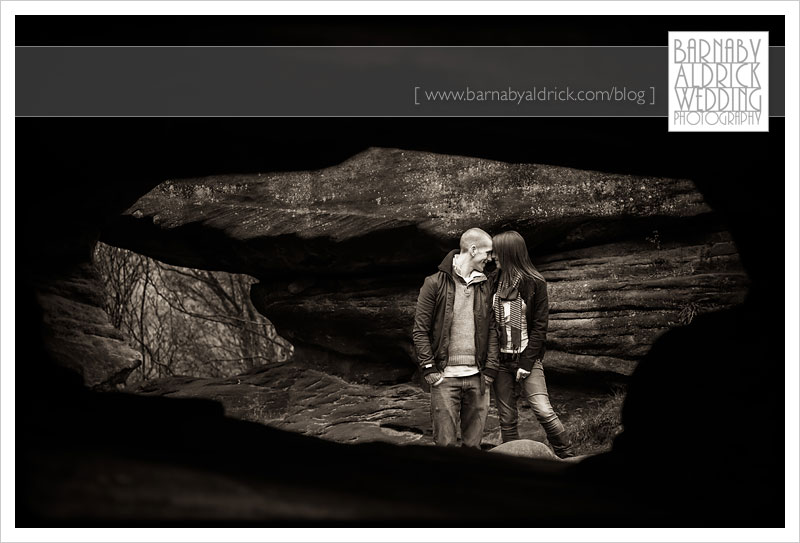 I liked this hole in the rock, framing Em & Harry. 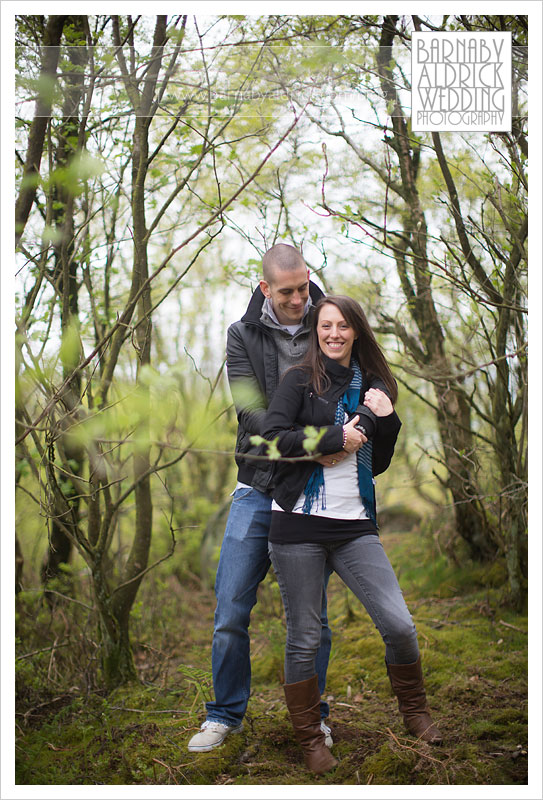 Like most of my laid-back couples, they didn’t want anything too posey, and it was great to show them that in spite of it sometimes feeling a bit contrived and awkward, the target is always to catch relaxed moments between them, even if they are laughing about how weird it feels. 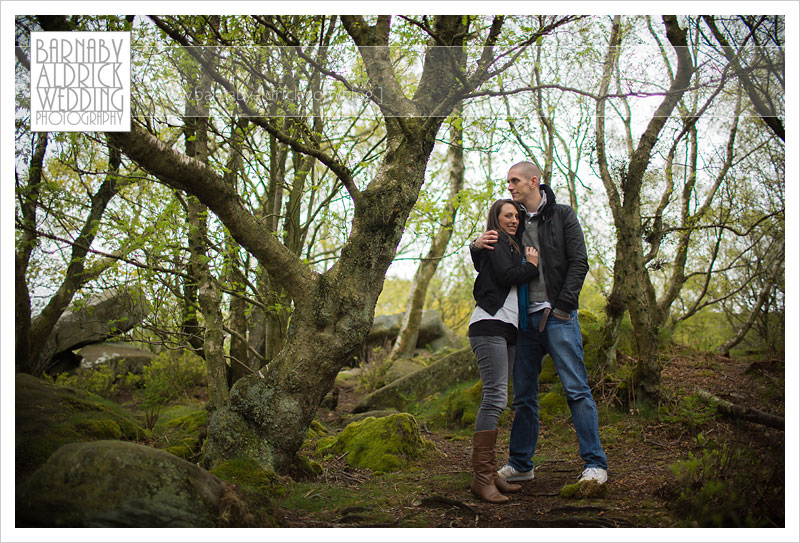 They’re having a woodland theme to their big day (as well as a whole host of other brilliant ideas!), so I thought some pics in the woodland would be nice. 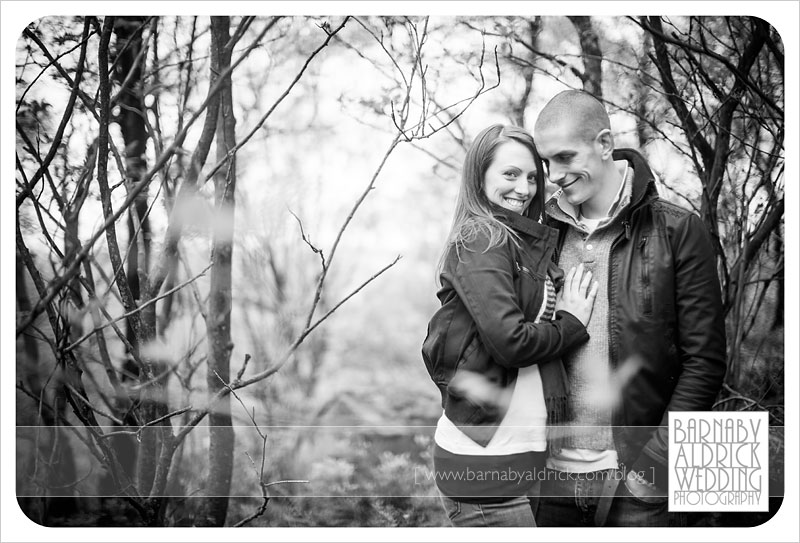 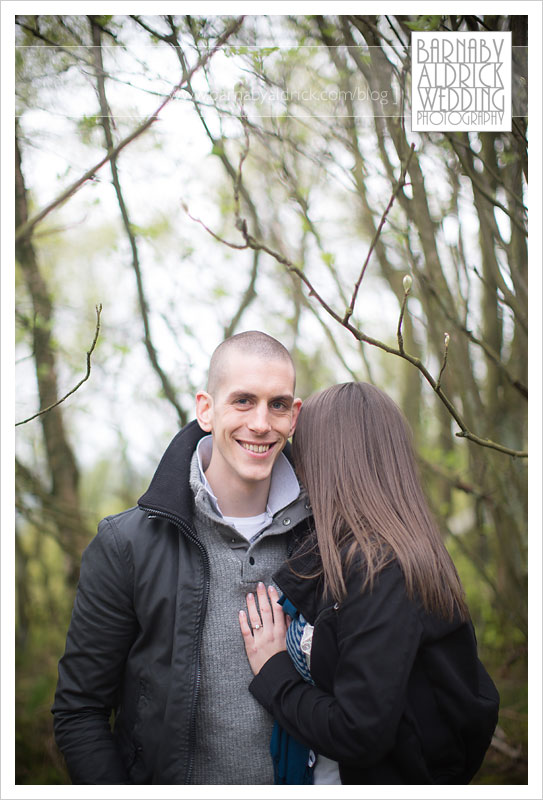 A moment of laughter! 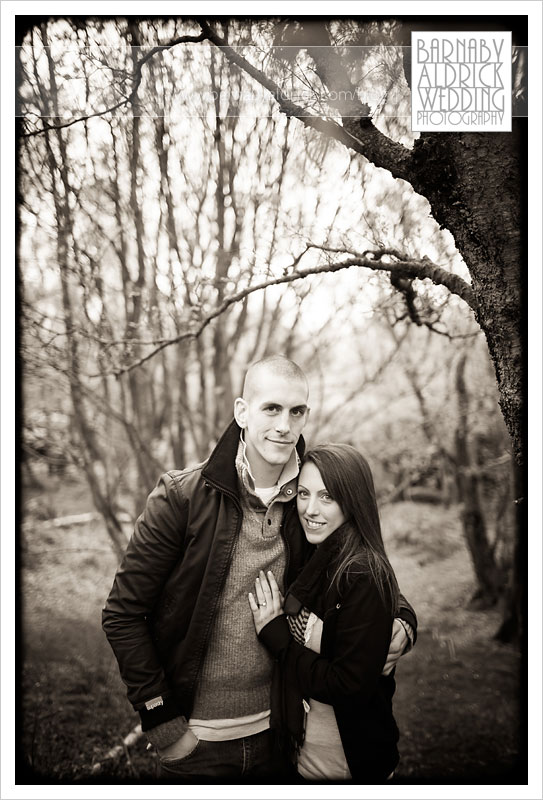 and a slightly more serious one, on the 35mm f1.4 lens.  I love the blurry pattern made by the out of focus distant trees. 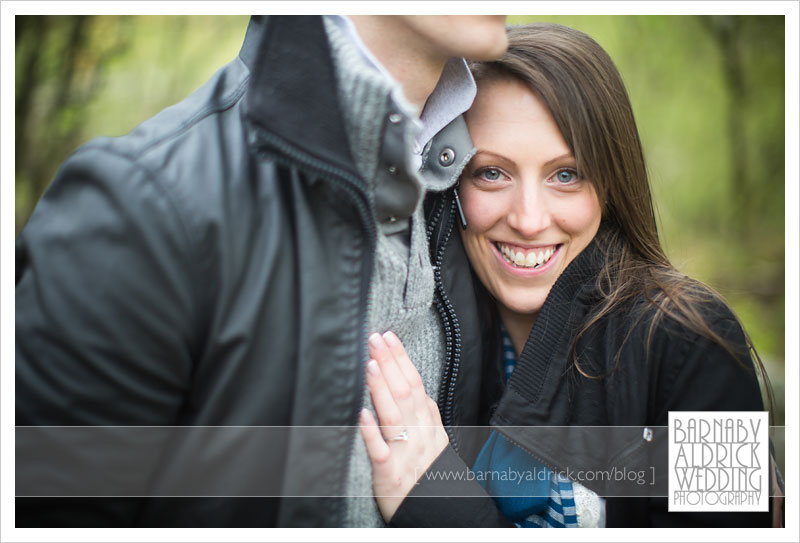 I can’t decide which I like most of this one… 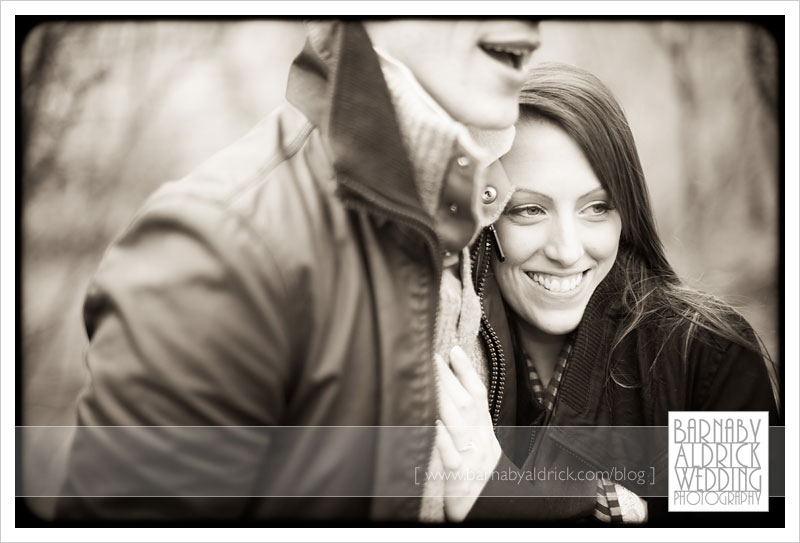 …and this one!  They both rock. 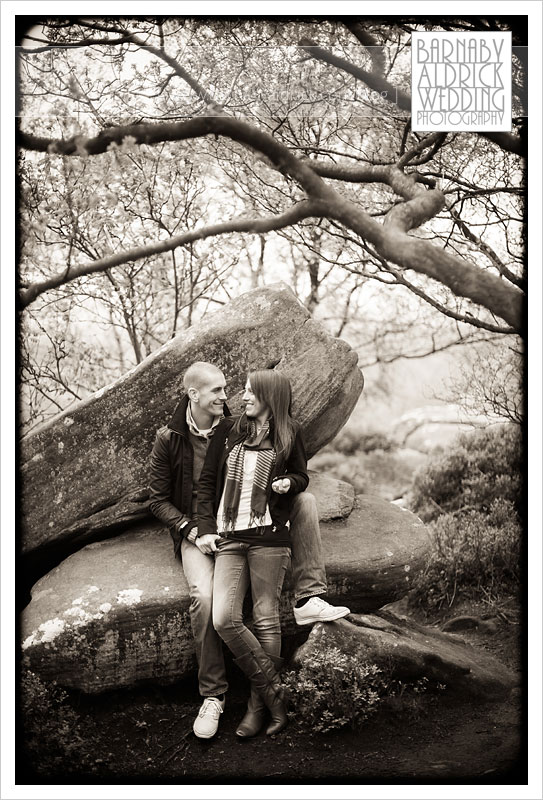 We weren’t’ short on places to cuddle up, in front of the random rocks, jutting out. 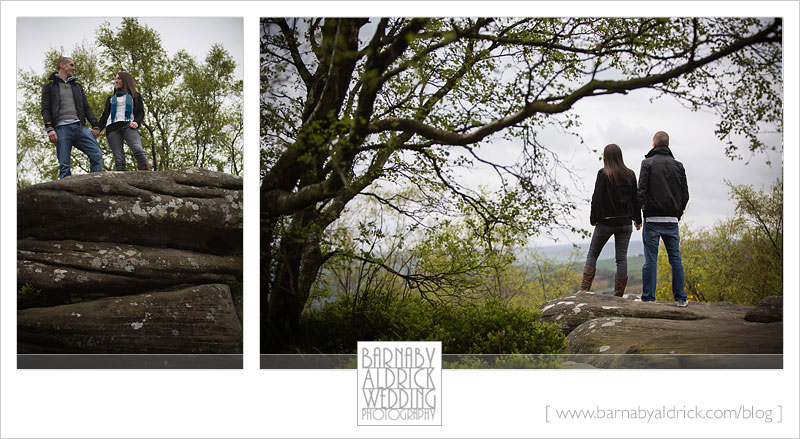 Next stop, up top!  We climbed up onto some of the higher rocks for a tasty view over North Yorkshire! 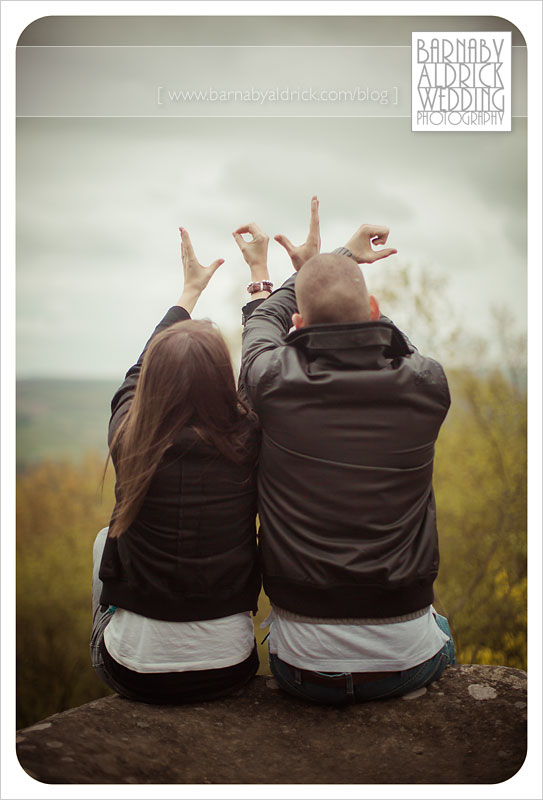 This was an idea they wanted to try and I really liked the way it turned out! 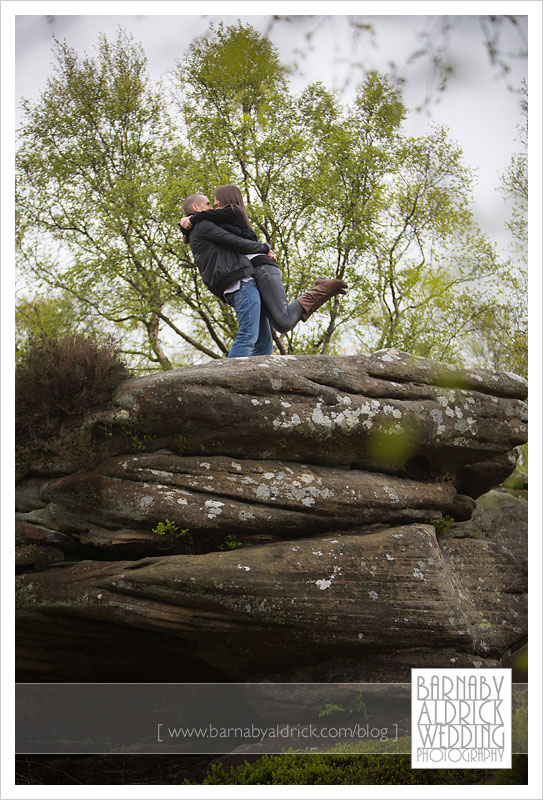 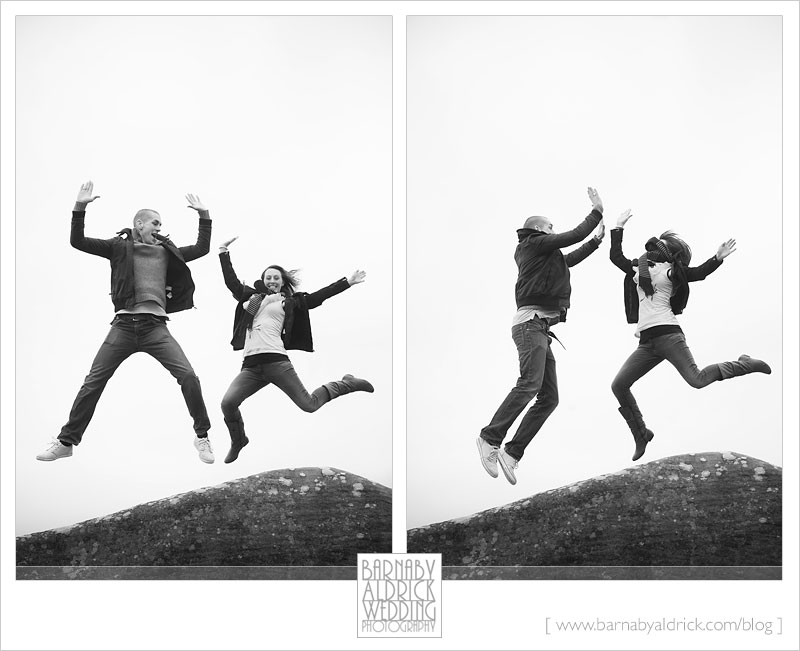 Another idea we had up on the rocks was to do some jumping shots! 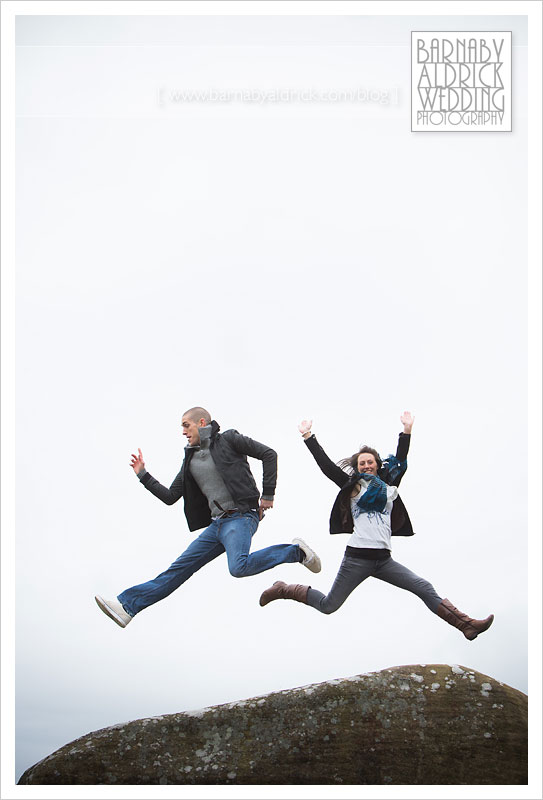 This one was my fave! 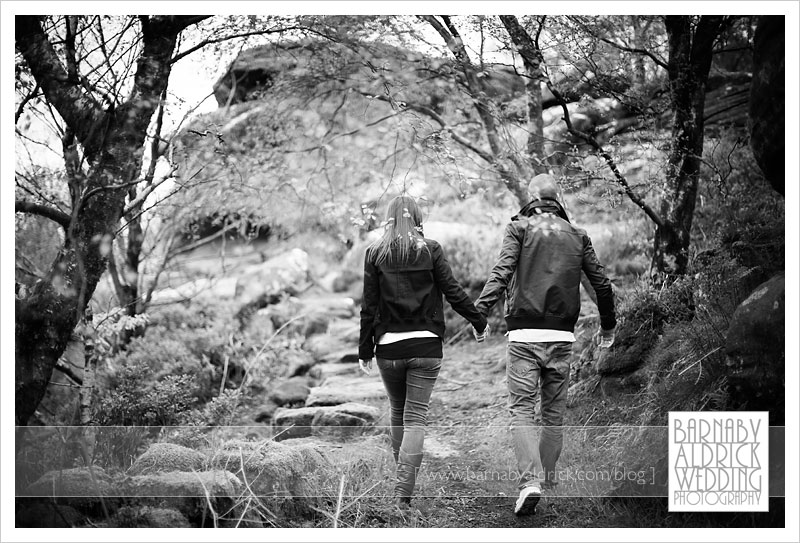 Strolling back through the woodlands… 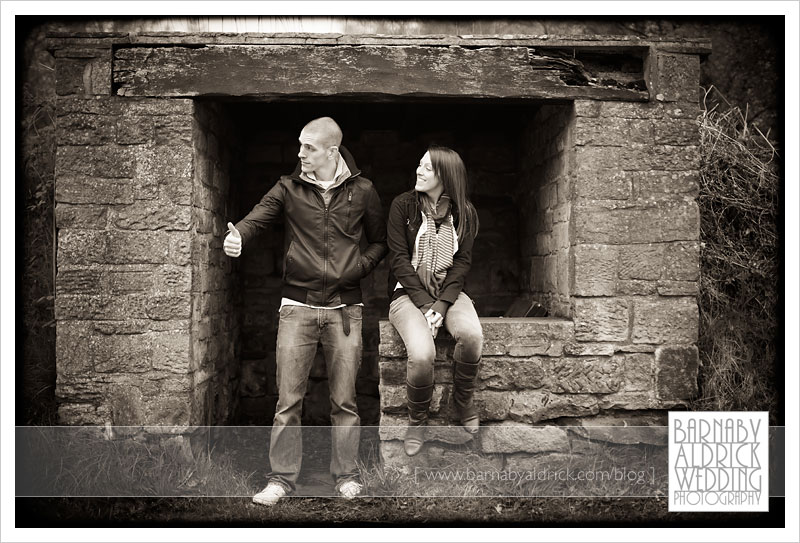 …we found this random shelter that looked a lot like an old school bus shelter. 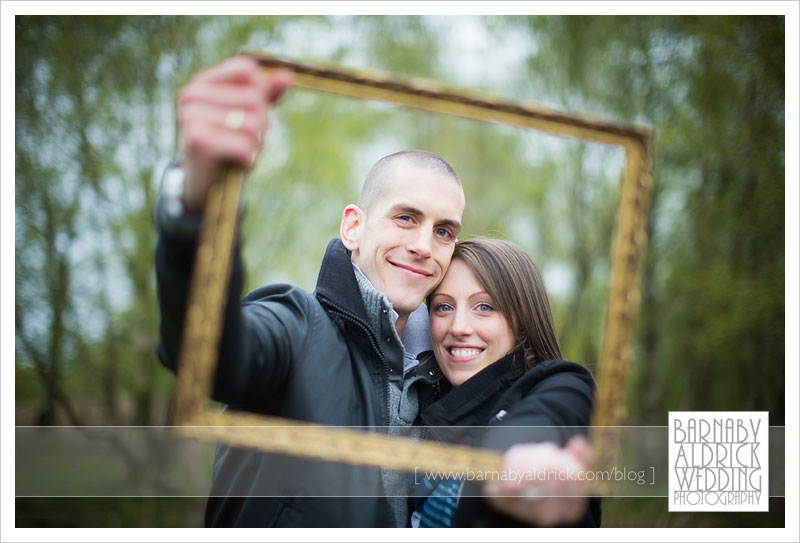 On the way back to our cars (both black Audi TTs! Another sign of good taste, on their part!), we’d been discussing the idea of using props like an empty picture frame on their big day for guests to mess about with, and I said I had one in my boot, so out it came for a final few fun shots! 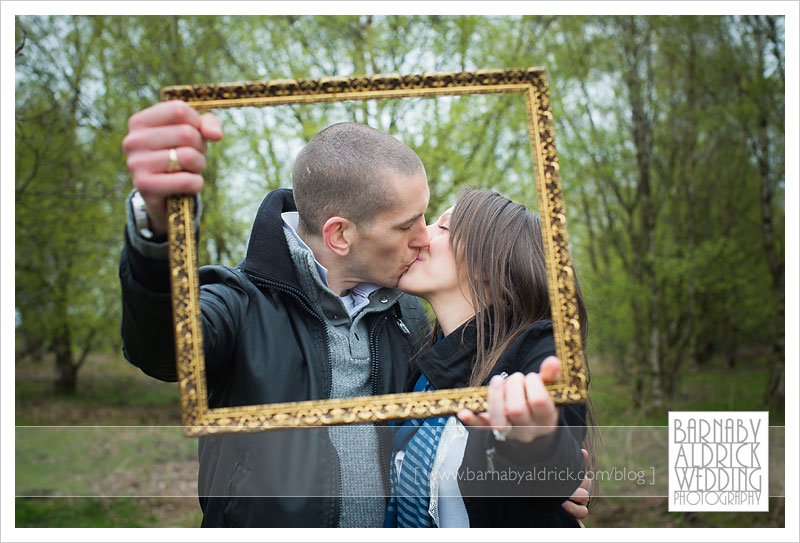 They’d said they’ve never seen an image of a couple kissing that didn’t make them wanna spew, so hopefully this one works! 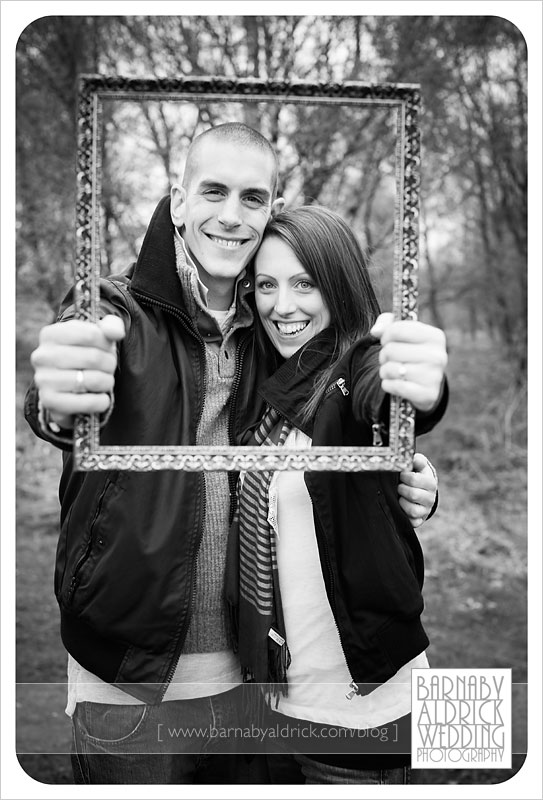 It was so good to meet and get to know these guys in advance of their big day, and to revisit the amazing Brimham Rocks.

Can’t wait to join these kids up at Middleton Lodge in late August, it’s going to be a cracker!