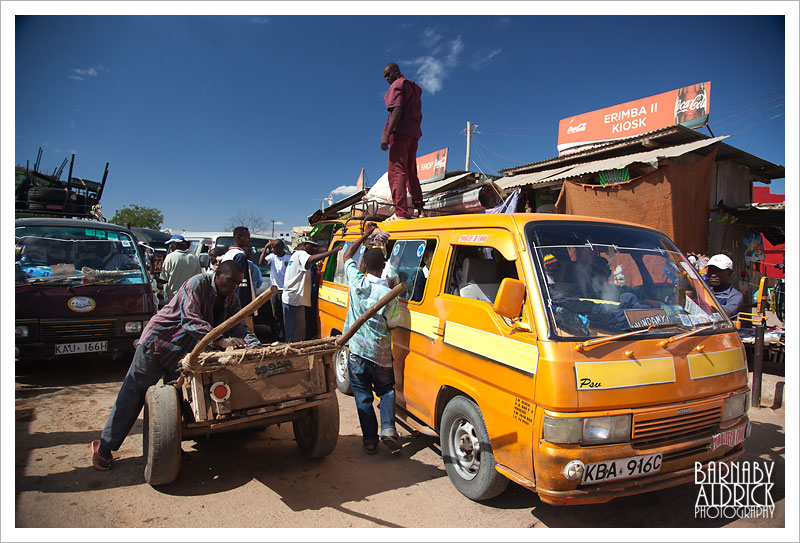 After leaving Tsavo National Park we headed North-West towards Nairobi, again stopping into a small Kenyan town to round up camp supplies.

These bustling 3rd world towns always throw up fantastic photographic opportunities as everything is done out on the street. 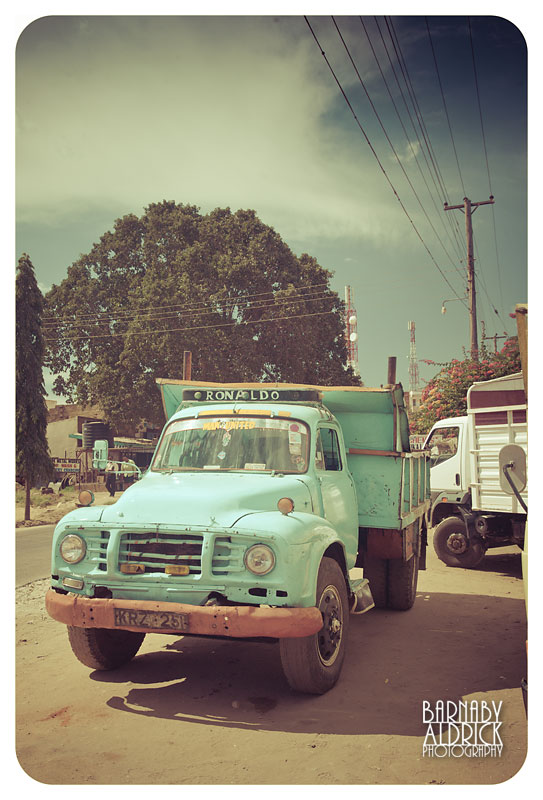 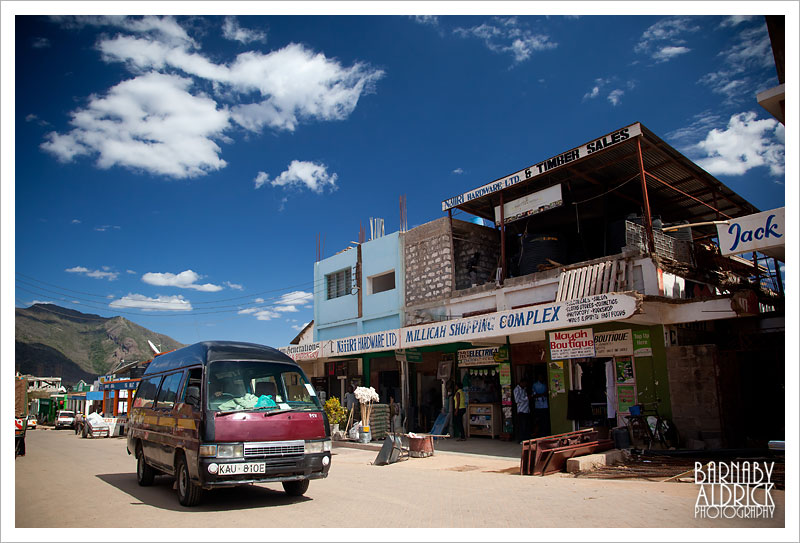 These minibusses are called ‘matatus’ and are the quintessential mode of Kenyan transport.  It appears you can fit about 25 people inside them and drivers try to out pimp one another with powerful in car entertainment systems (including Plasma screens), flashing LED lights (than can often be confused for police lights) and bizarre English statements like (“Silence is defeat”) .  They’re essentially a mobile disco. 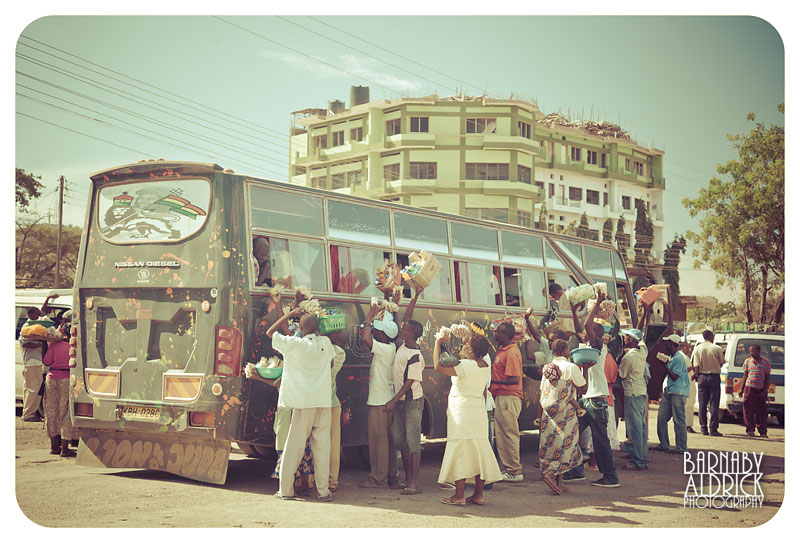 At the bus stations hawkers try to push their ways. 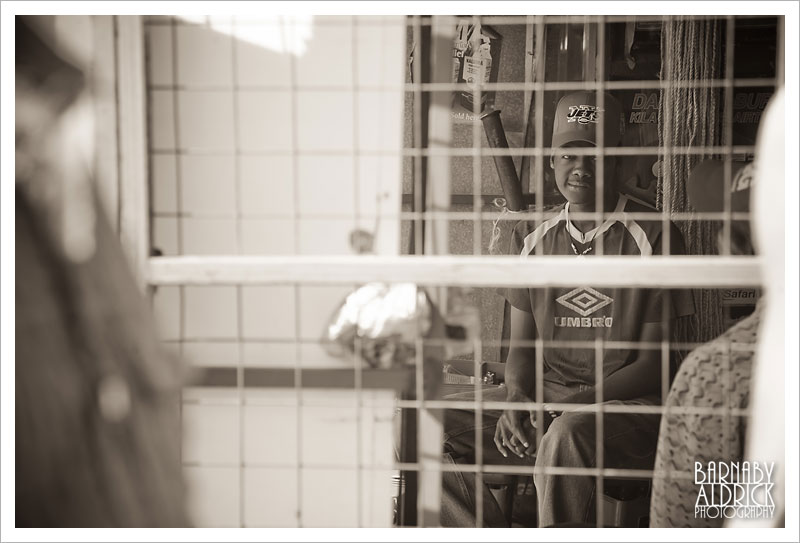 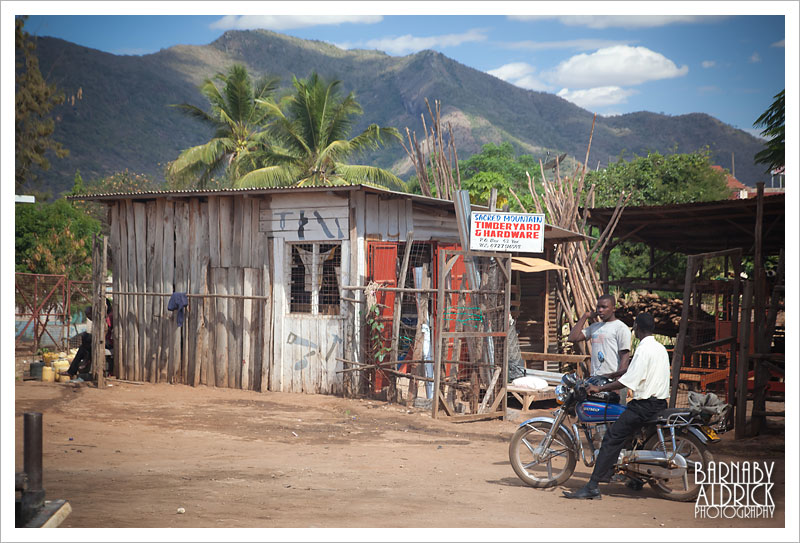 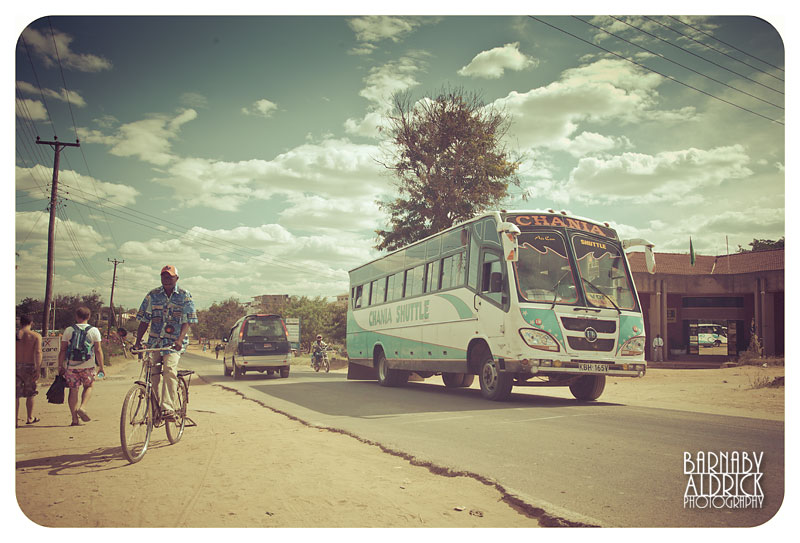 These badboys are nicknamed ‘death busses’ and tear up the roads (& ditches) up and down the country.  As on most developing nations roads, the bigger the vehicle, the more recklessly they drive. 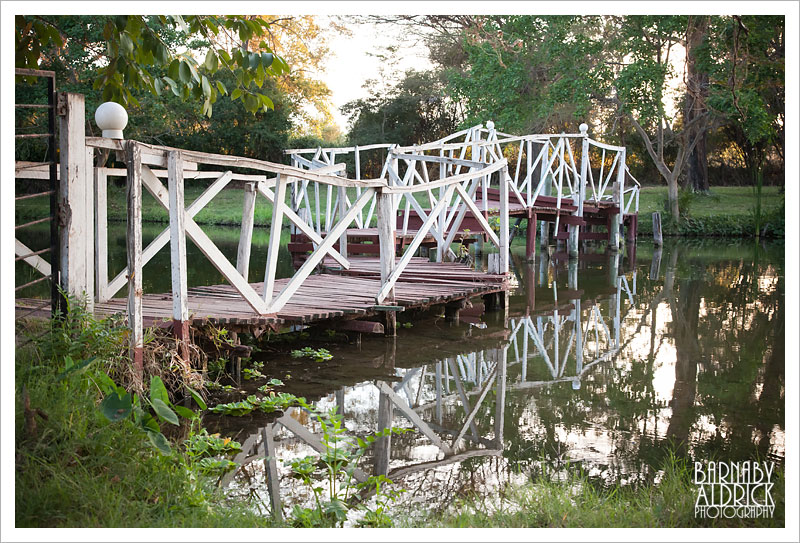 We stopped for another night’s camping at an ace place called H’unter’s Lodge’ with it’s own lake, ropey bridge and trees filled with giant 5ft stalks, all giving it a bill clacking cacophony. 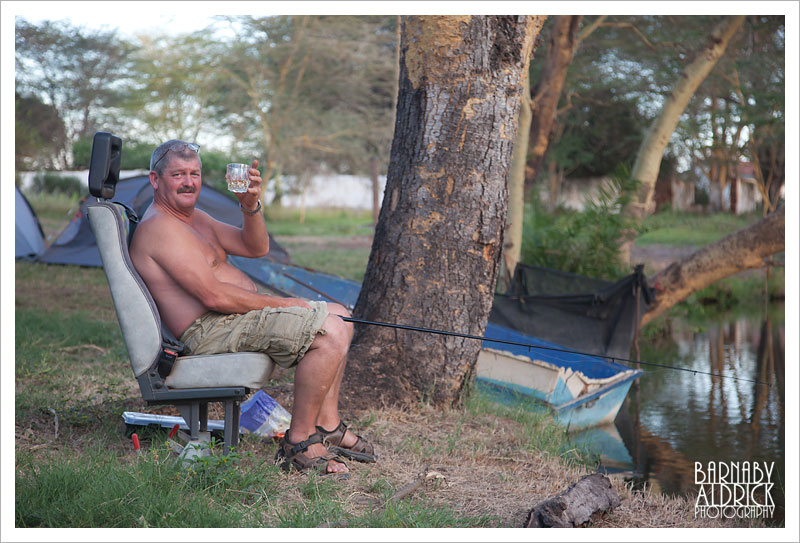 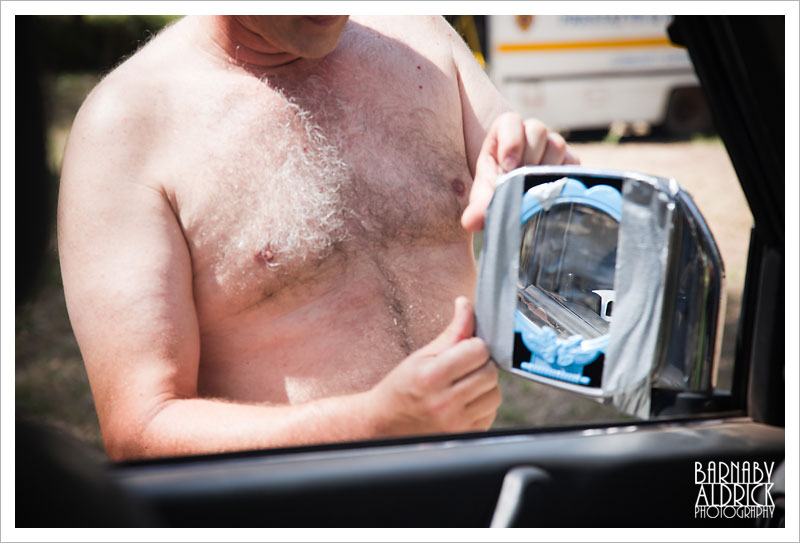 Phil got practical on the wing mirror.  All hail gaffa 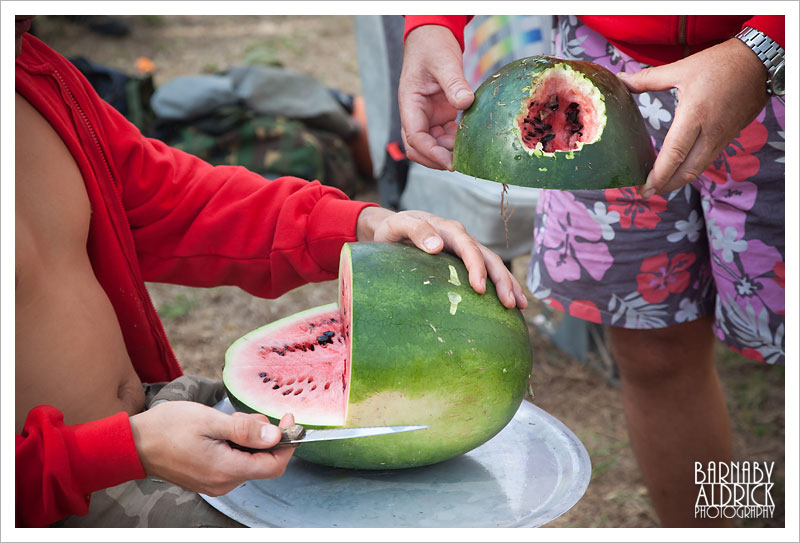 The next morning, the herons had had away with out net of catfish and our melon had been monkeyed 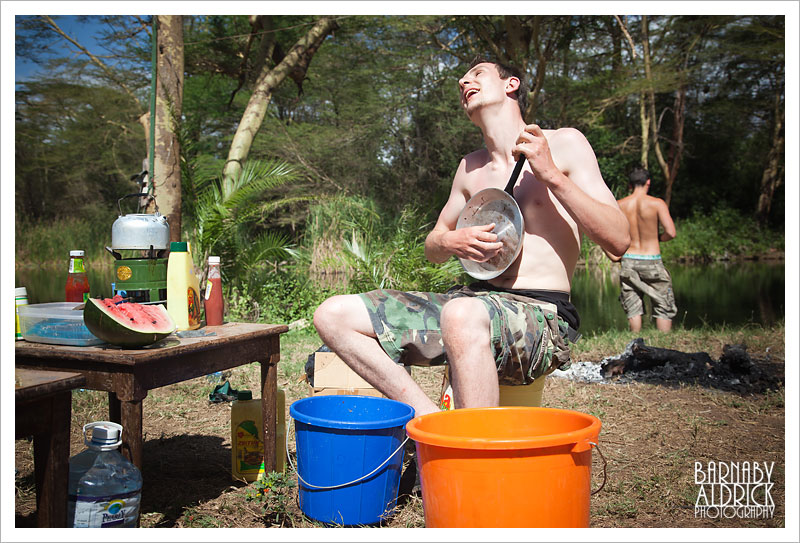 Mr Joe, breaking up the washing up with a bit of duelling banjos 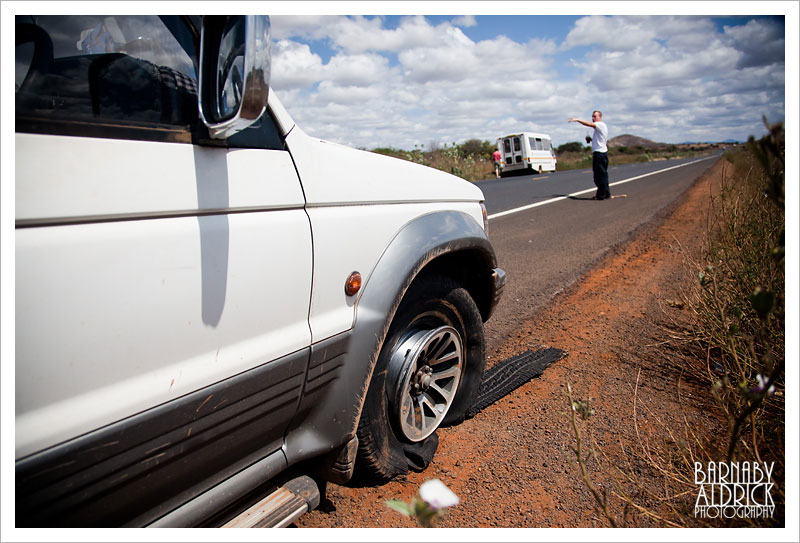 About 5 minutes after hitting the road to Nairobi, with Gav at the wheel of our Pajero, we had a high speed blow out that drew us across the road.

Fortunately there was nothing coming at the time. 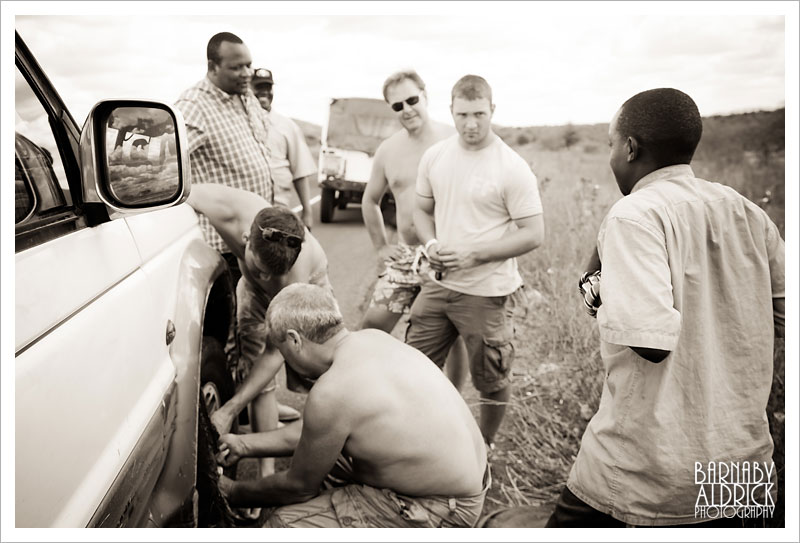 It took a good few hours hailing random 4x4s off the road to see if they had the right spanner for our wheel.  By the time we’d done we’d drawn quite the crowd.

Fortunately Greg allowed us to pass the time by throwing cumquats at him. 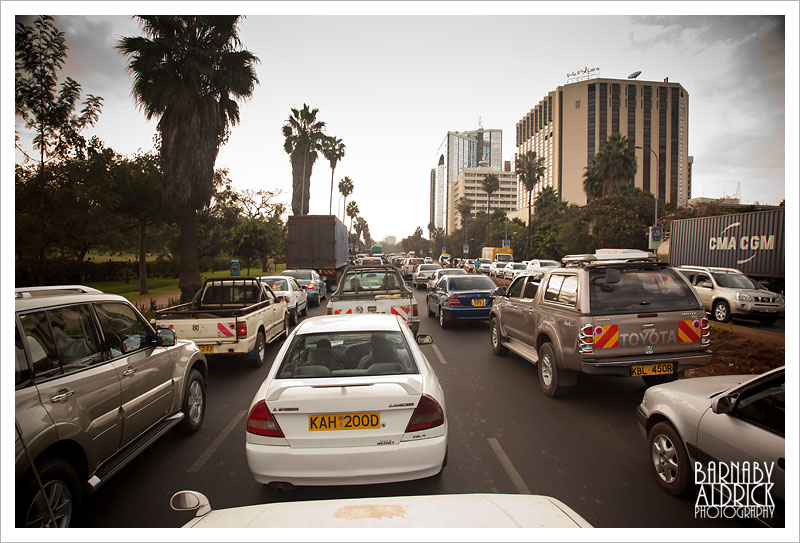 We finally made it into Nairobi at rush-hour and it was pretty much a carpark. 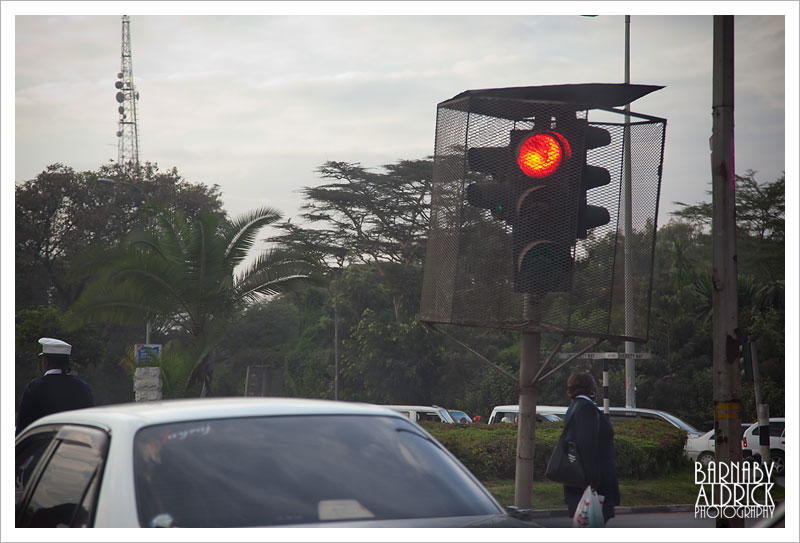 Nairobi has been somewhat unfairly dubbed ‘Nirobbery’ due to impressive crime stats.  The fact that they have to box in their traffic lights did reinforce this.

It was night once we made it out of the city limits, and our truck was flagged at a police checkpoint.  The other vehicles made it though while an affable cop greeted us, took Gav’s driving license and asked him to step out of the vehicle.  On opening the boot we were asked if we had a road warning triangle, which we didn’t, and so began his attempt to extort us out of a significant amount of kenyan shillings.  Having been through this mill before, Gav demanded a receipt.  The cop said we’d have to get it from Nairobi police station, Gav said fine, the cop gave him back his license, Gav dived in the truck and off we sped through the checkpoint.  I won’t lie, but you could’ve sliced the tension in the air as we burnt up another hour on that road towards our Lake Naivaisha turn off. We could almost see in the dark, watching out for more cops.  Then once we turned off the drag, we managed to sneak through a final police checkpoint before arriving at Captain Carnelli’s campsite for another night pitch and round of steak sandwiches.

Tomorrow at 9am I’ll post a snaps from our Lake Naivaisha leg.