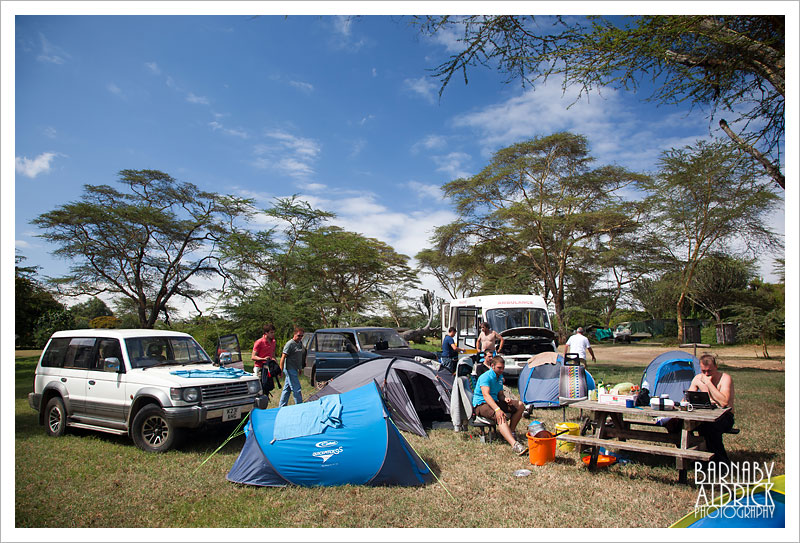 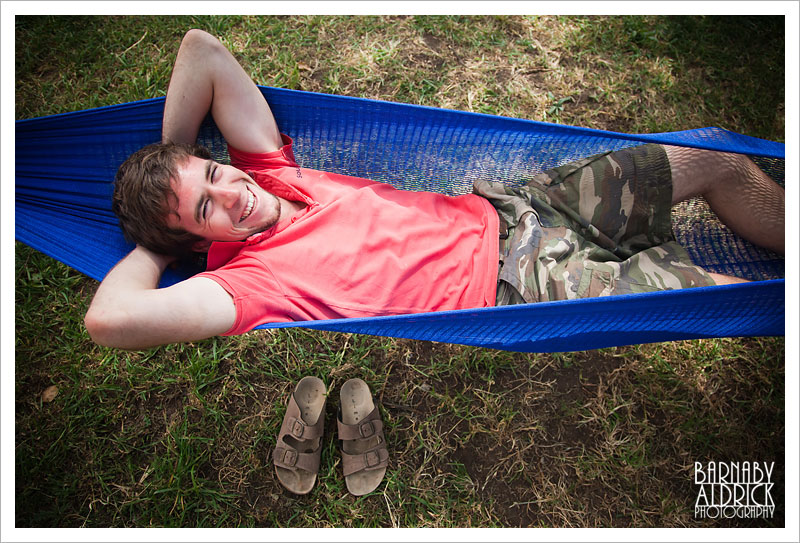 HERE’S JONNY! ‘Coching‘ in a hammock. 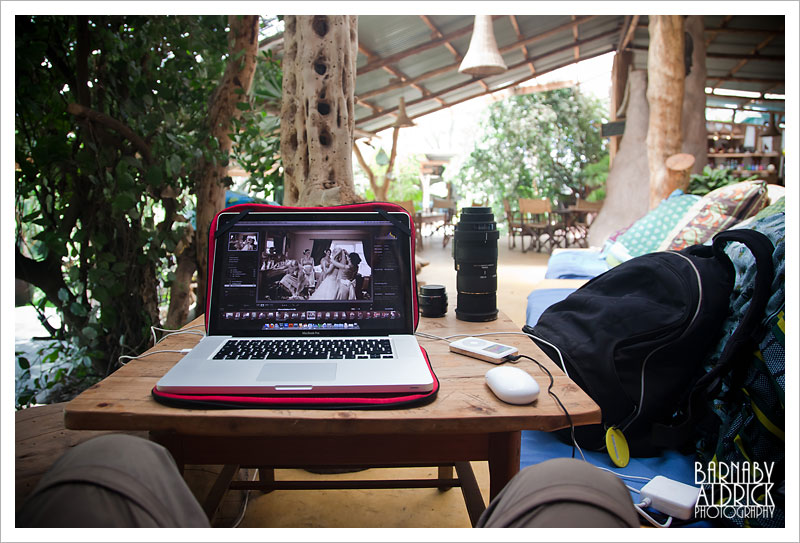 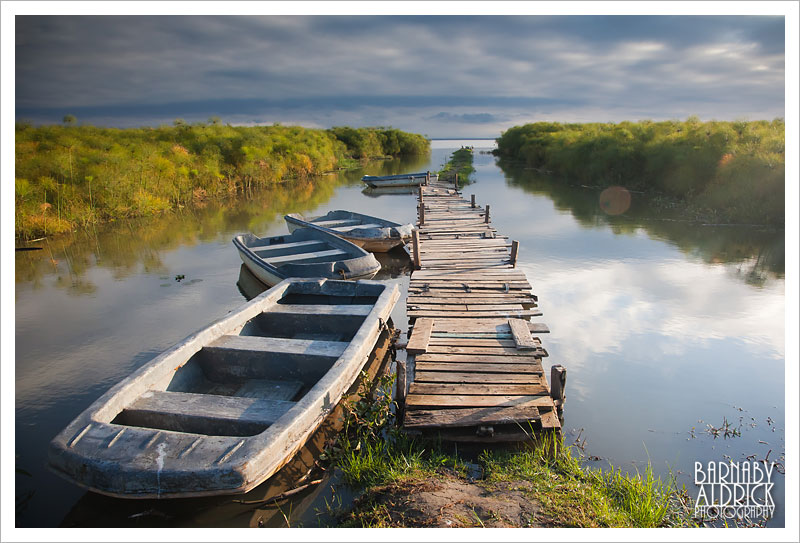 Lake Naivaisha is famous for it’s hippo population and they’re known to chill out on the bank of our campsite.  So one morning, Jonboy & I got up at dawn to stalk.

But apart from a bit of rustling, we saw very little, and ended up photographing the cute jetty instead. 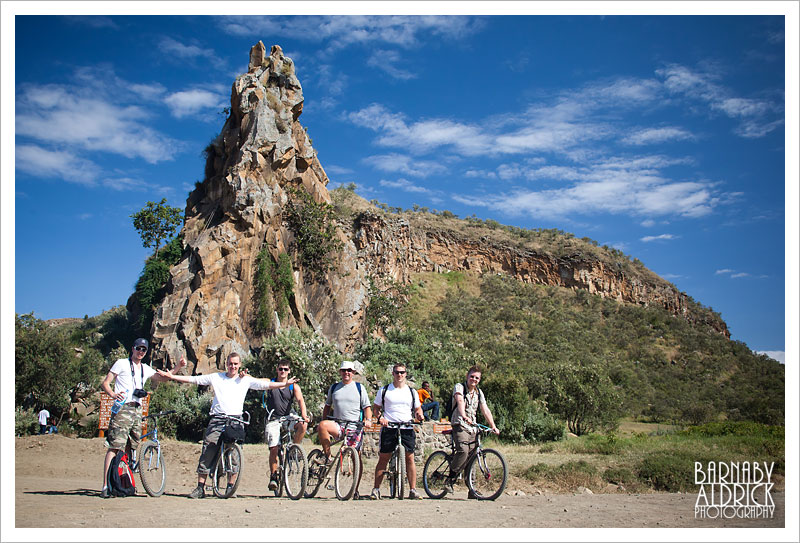 On our last day in Naivaisha we decided to cycle round Hell’s Gate National Park – Kenya’s smallest national park, at 26 square miles.  Our bikes we’re less than pretty and two of the team bailed out before even getting down the path to the entrance. 4 members of the group decided to nail it uphill round the 14km buffalo circuit, while John & I took the seemingly more sensible downhill canyon route. 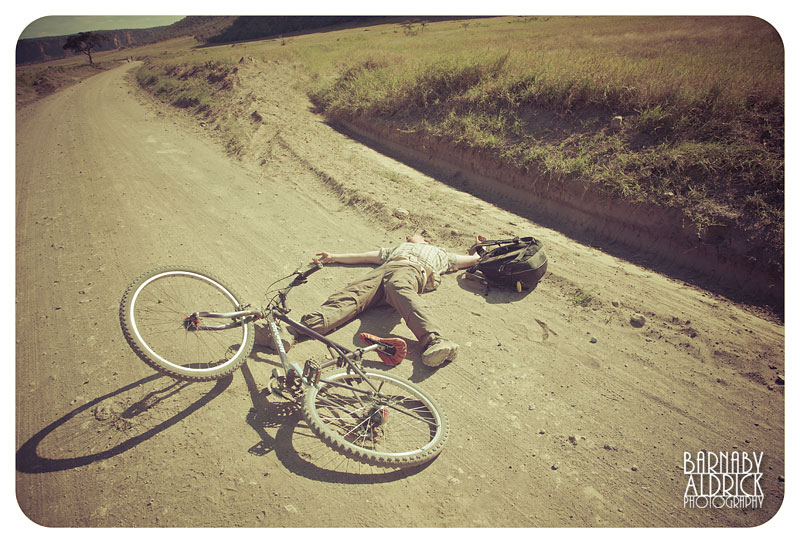 Cycling round a wild animal reserve didn’t seem the most sensible option, but we were assured there weren’t many predators… 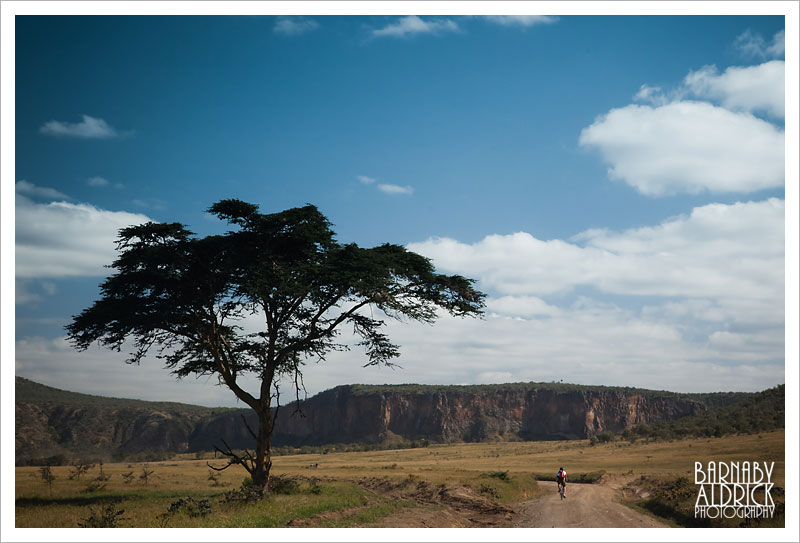 The park lined is lined with red cliffs and volcanic plugs, with working hot springs (tapped behind the scenes by a massive geothermal plant) 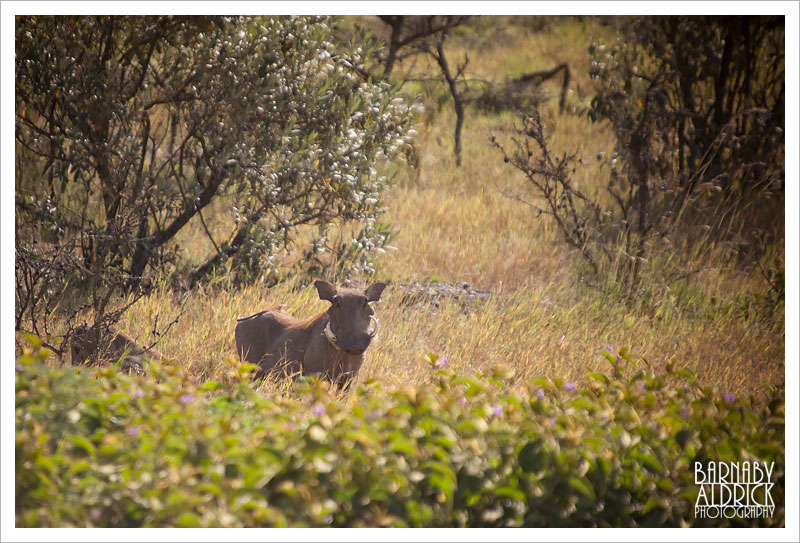 We caught a few warthogs doing their thing, and ended up humming the lion king soundtrack.

Pumba: “Gee. I always thought they were balls of gas burning billions of miles away.” 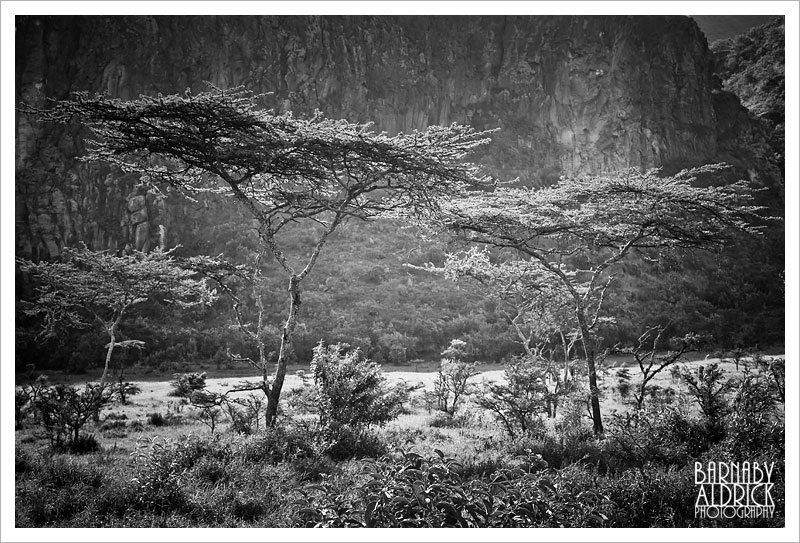 The park did have some pretty scenery 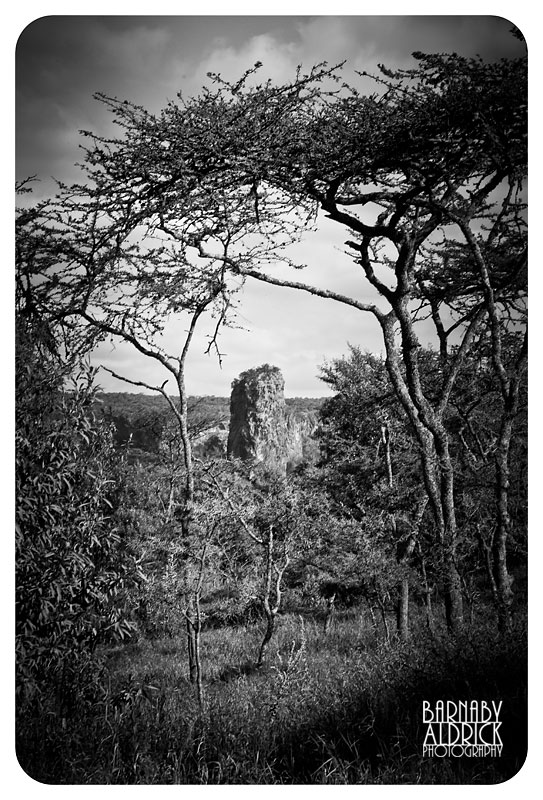 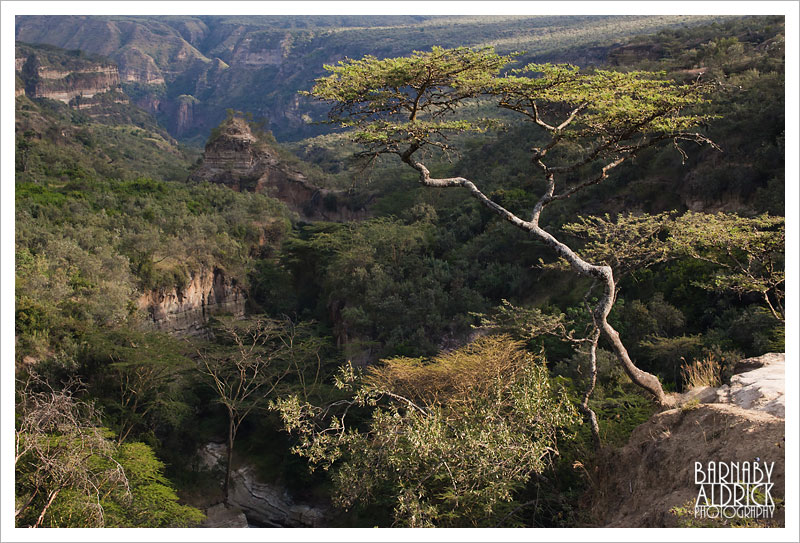 It doesn’t get more Kenyan landscape than this eh? 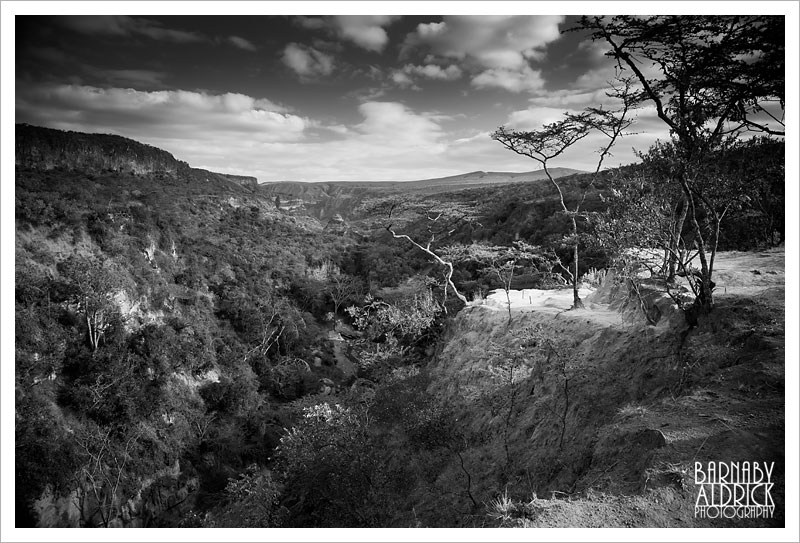 I can’t work out which image I prefer out of the two above.

Once we’d seen this view, and already cycled non-stop for a good few hours, we decided to head homeward.  Little did we know that that’d be another 2 hrs cycling as the sun fell.  We became concerned that all we had was half a 500ml bottle of water and a camera each to fend for ourselves.  After too many evil hills and a sneaking feeling we’d been on the wrong road for some time, we finally passed a neighbouring camp & rejoiced with weary little dance & an orange fanta. 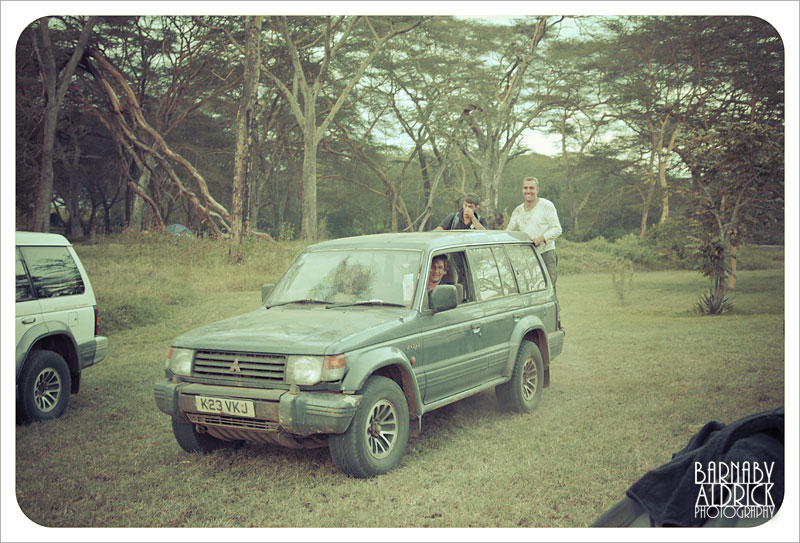 Not long after we rocked in, saddle sore as hell, the other team rocked in in a Pajero stuffed with bikes. 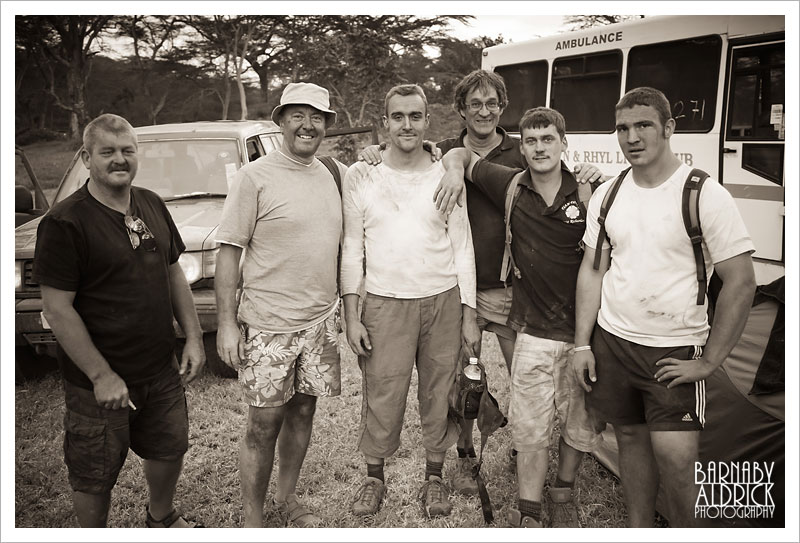 Half way round the buffalo pass the already dusty road turned to deep sand, too far down to turn back and unsure how far lay ahead, gregs chain snapped and they were essentially stranded.  In a turn of fate, after returning to camp Graham & Phil decided fire up the blue 4×4 (which in retrospect would’ve been a far better mode of transport in the first place!) and head back to Hell.  We saw them pass us and when they caught up with the dudes sat at the roadside they essentially rescued the our lads, stuffing bikes in the truck and heading back to camp.

John & I must’ve cycled about 30 miles off-road and it’s safe to say we all slept well that night. 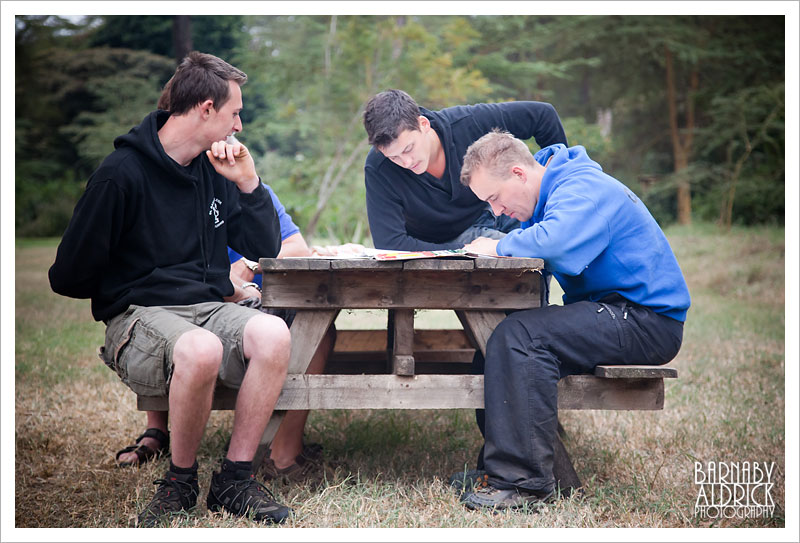 The next morning we packed camp, and plotted our course 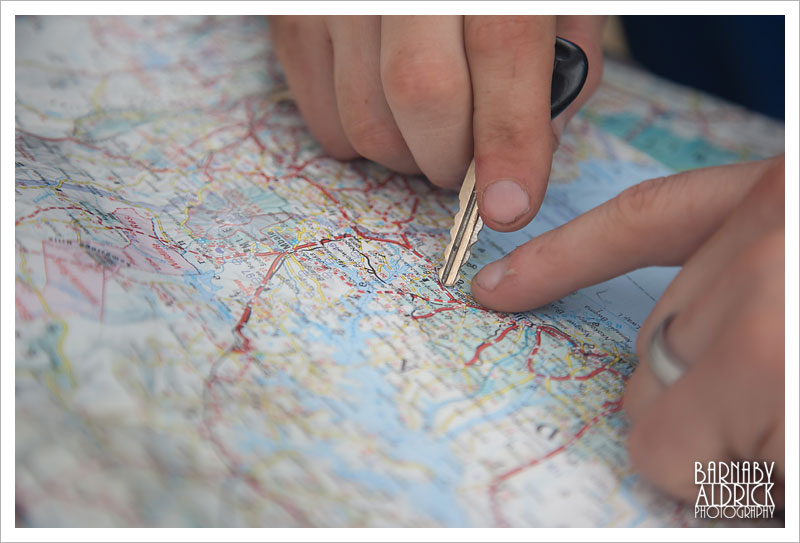 Destination: somewhere near the Ugandan border. 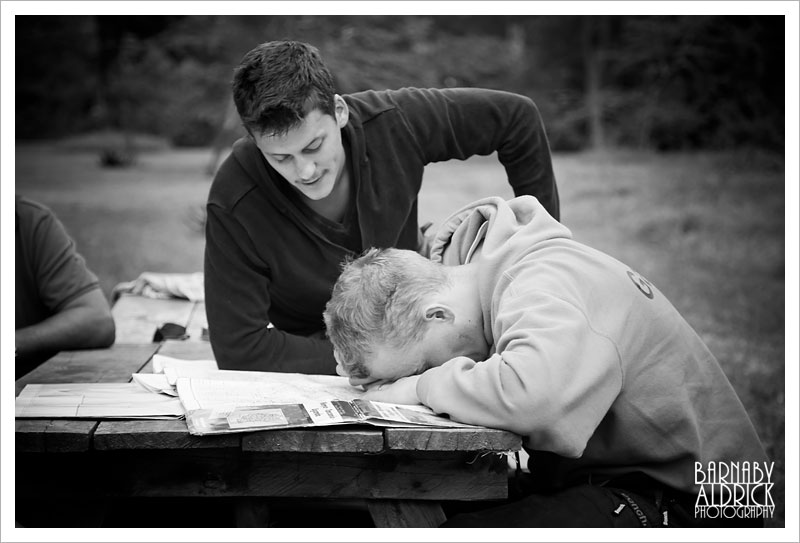 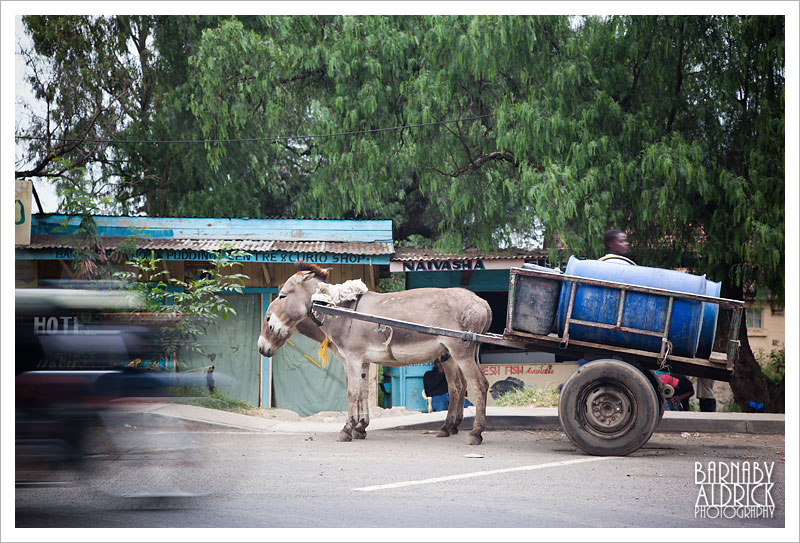 While stopping for petrol seems to be the time I get to shoot the townships. I like these donkey’s and the motorcycle blurring into shot. 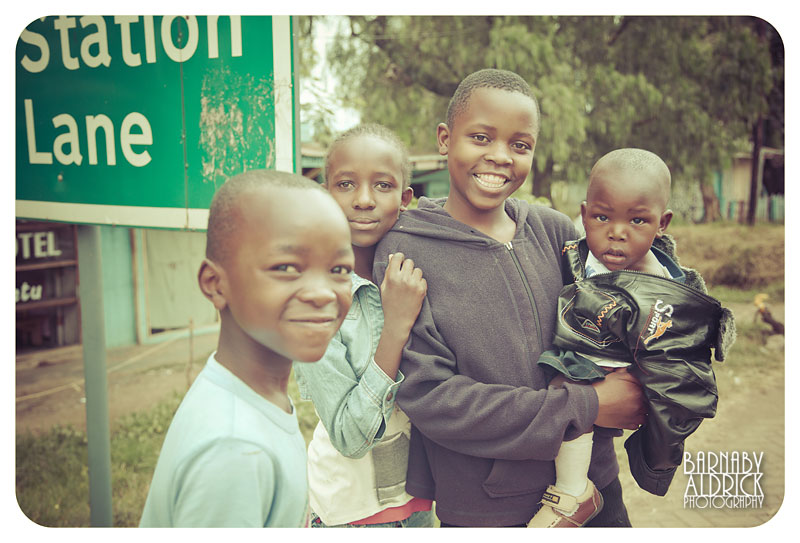 Some adults here get quite stroppy if you point a camera at them, but I asked these kids & they let me snap away. 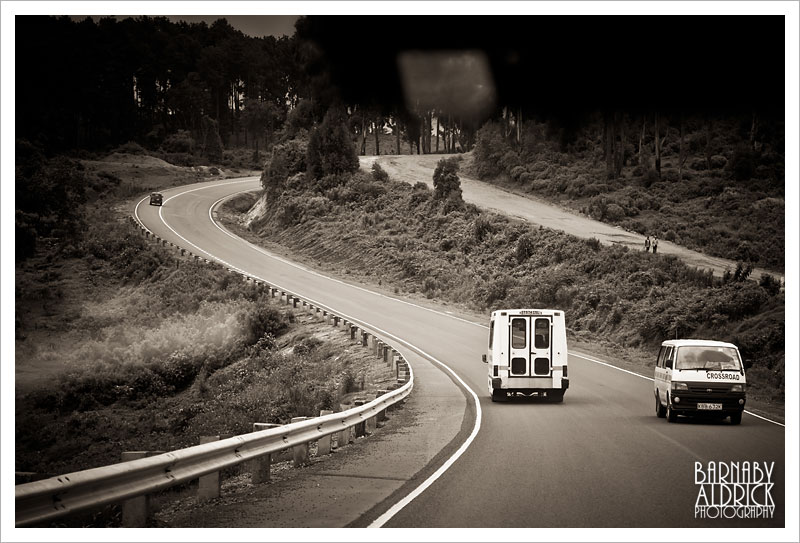 This leg of the journey took us up and over the Kenyan highlands, and the dust and sun turned to greet and rain. 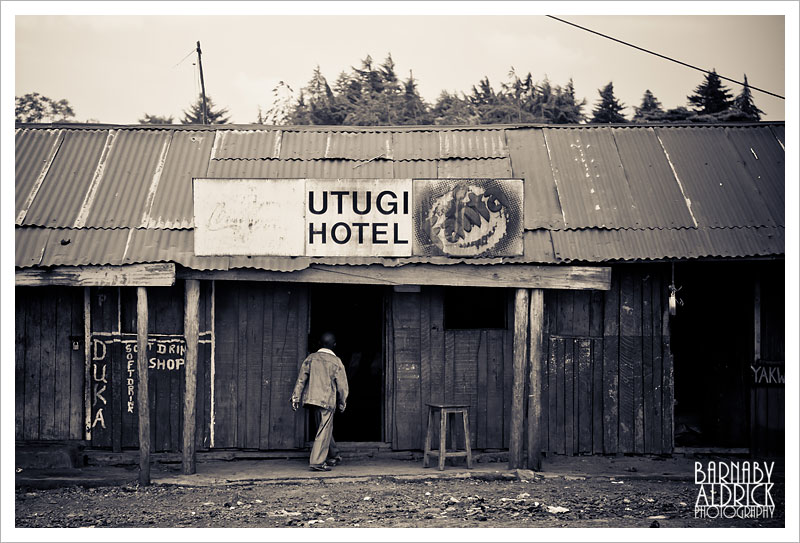 A few snaps from the way past caught this fancy hotel. 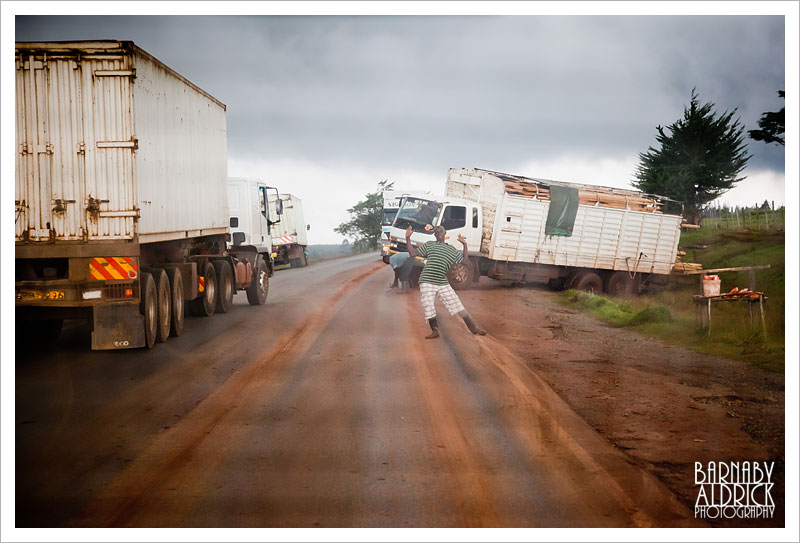 Another road accident and a flamboyant kenyan. 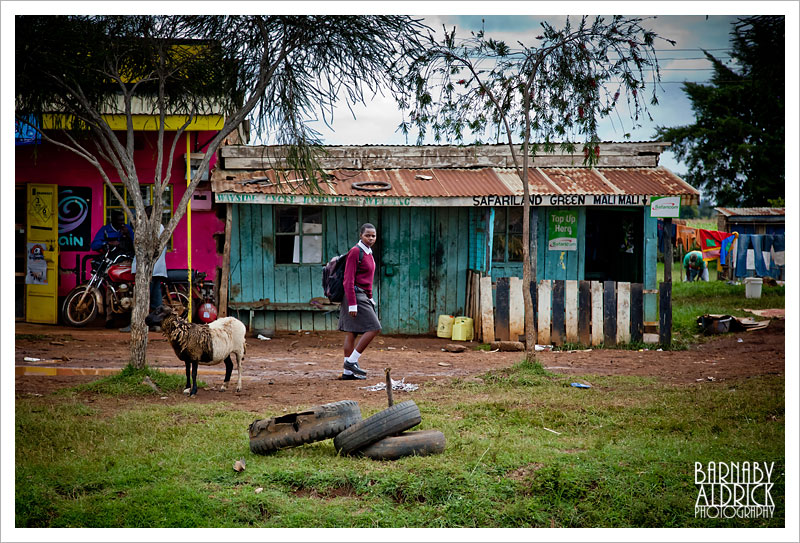 I like this one, as it shows all the Kenyan components; brightly-coloured, wooden roadside buildings, wild animals and old tyres, someone hanging out their washing and a child in school uniform. 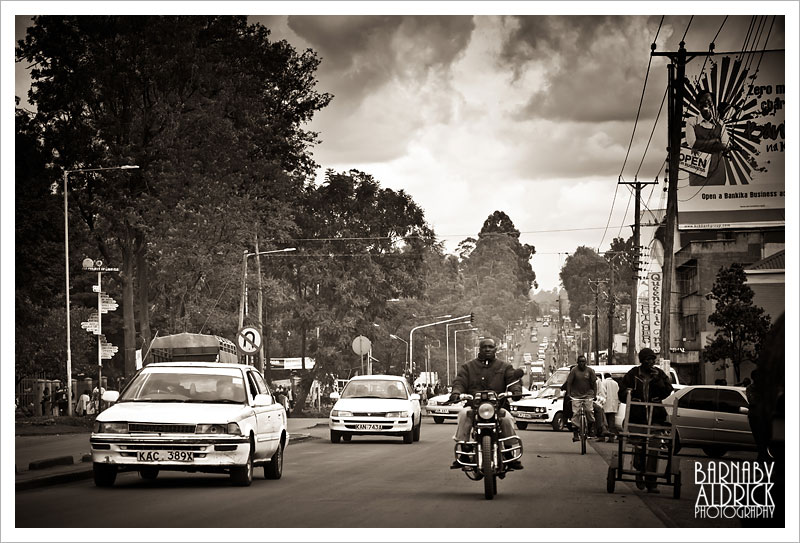 A busy street scene in Eldoret I think, one of Kenya’s bigger cities. 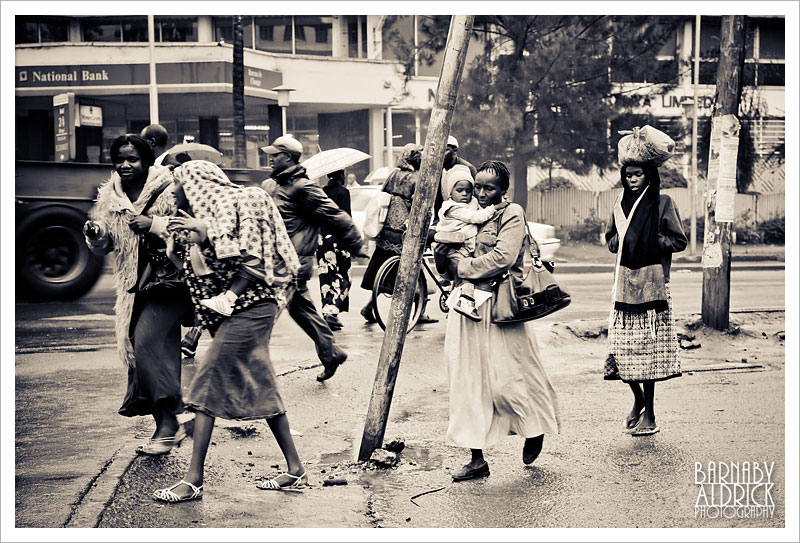 Rain wasn’t what I pictured in Kenya. 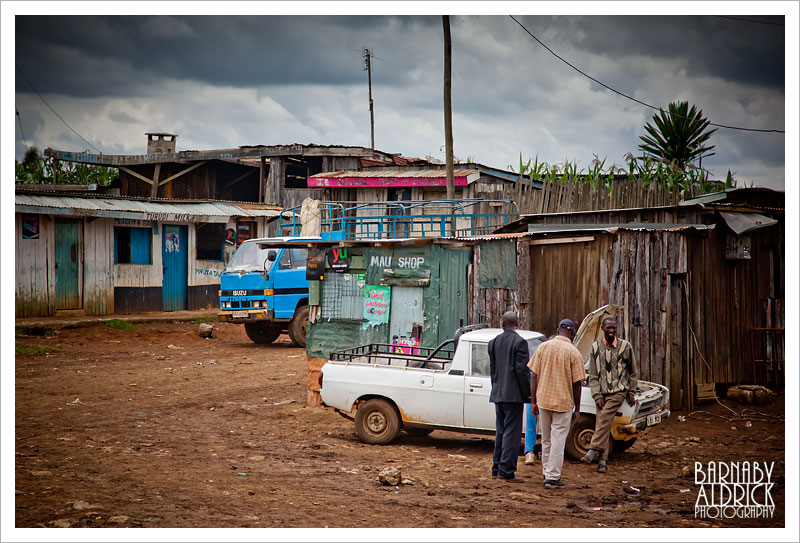 Pretty much by every roadside in Kenya is a bunch of men fixing a car.

Tomorrow we cross the Kenyan border into Uganda (Blog live at 9am).