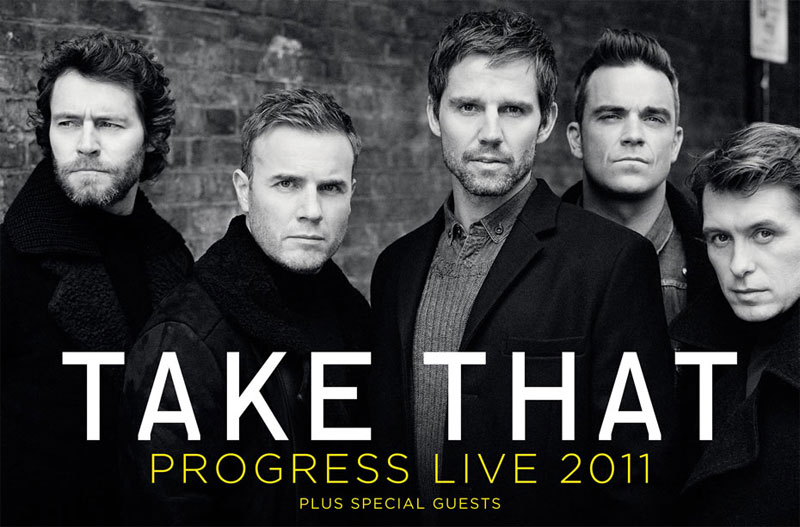 I wouldn’t say I was proud to admit that I recently went to see Take That live on their ‘Progress’ Tour in Manchester, but after hearing all round amazing reports of the Circle tour (from my Take That obsessed girlfriend as well as more impartial others), as well as Robbie William’s return for this tour, I was definitely interested to see what they’d pull out from up their sleeves.  Plus we got to go to Hard Rock Cafe for burgers & shakes beforehand! 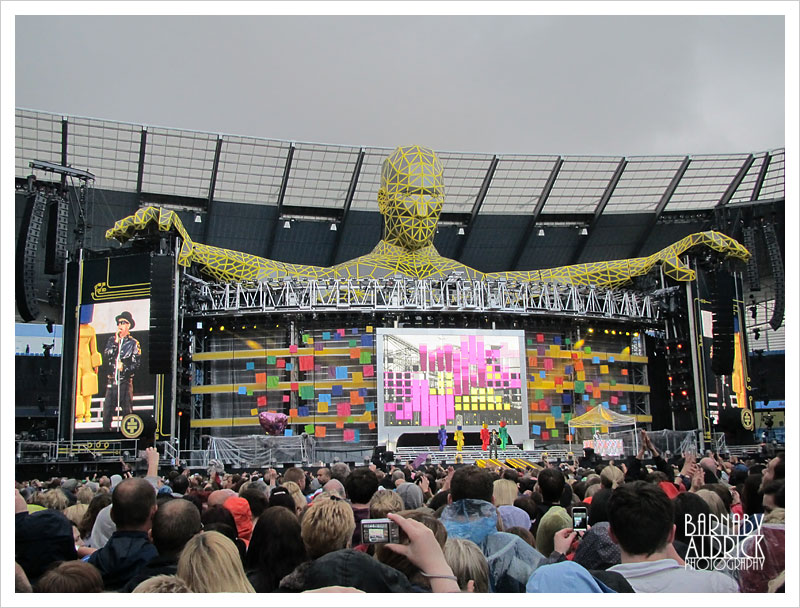 Opening the show were the Pet Shop Boys, who did a reasonable job of bringing the stage to life with some old faves, in spite of the drizzly weather. 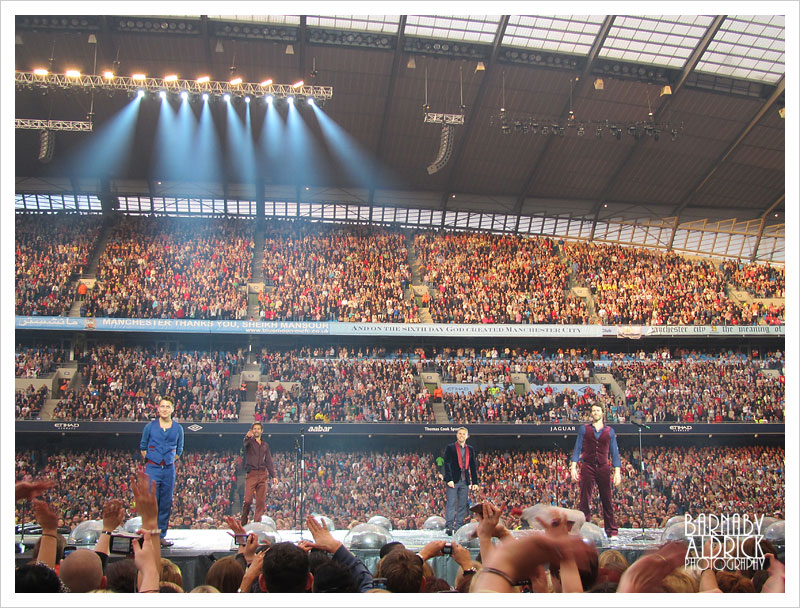 Eventually, and to the delight of many a female around me, out popped the awesome foursome.

With all the screaming, I suspect Dog’s for miles around wouldn’t know which way was up. 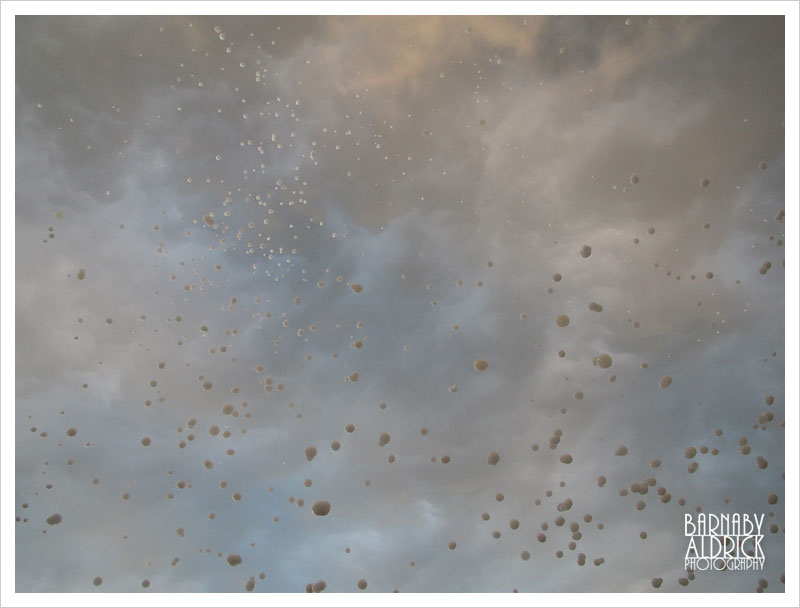 I like the fact that the higher ones have caught the sunlight. 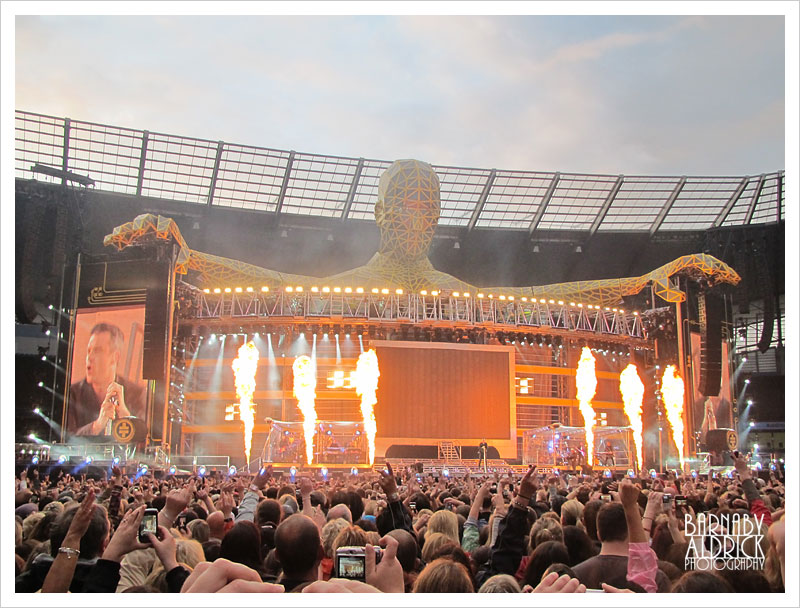 After a few of the newer hits from the more recent 4 piece Take That, out came Mr Williams for his turn; trying his damnedest to live up to his Ego. 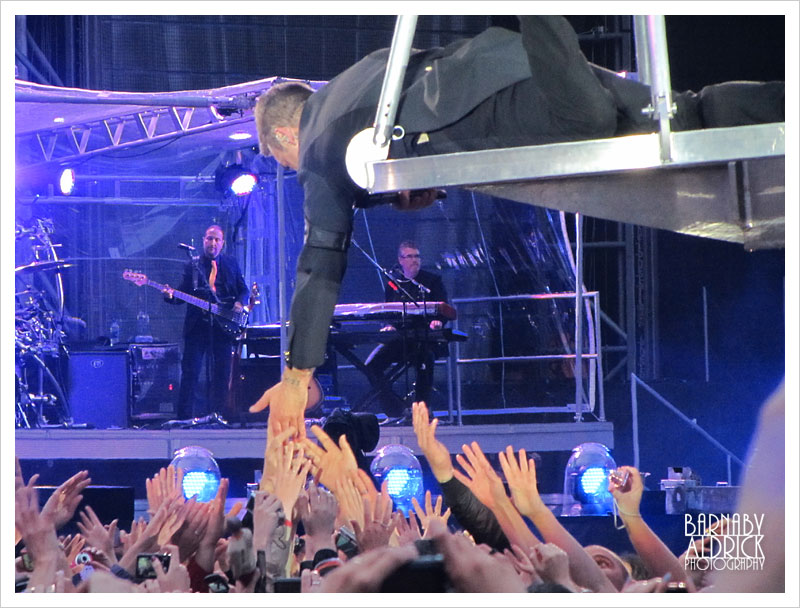 At one stage he climbed aboard a crane thing to shake a few hands.

I did think he was gonna get pulled in at one stage. 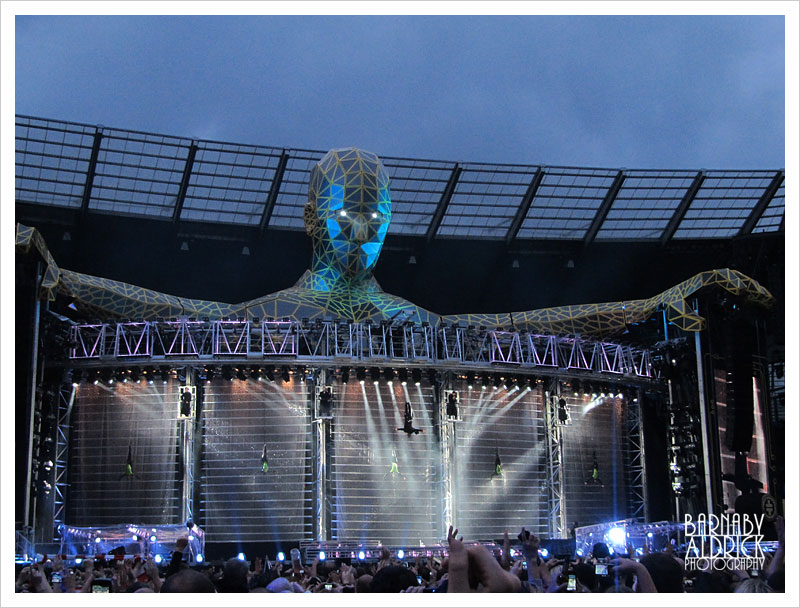 Then as dusk began to set in, the stage began to take to life.

The full band appeared atop the stage to sing ‘The Flood’, before Robbie dived off & the band were lowered down. 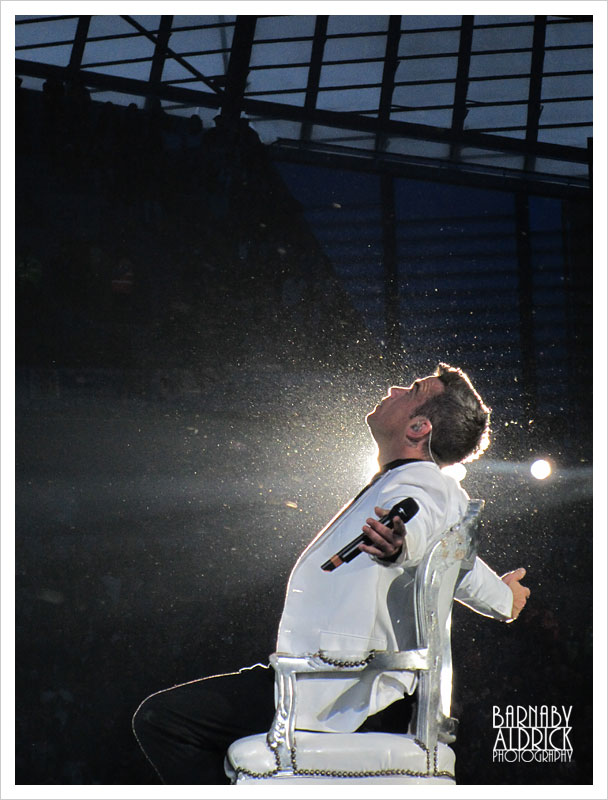 Although it felt a bit like he shouted his way through his songs, it was great to see cheeky Robbie do his thing.

I’d say overall as a gig went, it was a bit scrappy and bitty.  It was delivered in 3 parts; 4-piece > Robbie > full-band; which should have been ok, but someone decided there should be a massive costume change between every 2 songs. There was a pointless mad scientist character, filling gaps, a waterfall down the stage and a giant robot, that although it finally stood up, seemed really to serve no purpose what-so-ever.  Although I went in with an open mind, it seemed apart from the band reuniting, the show was a kind of themeless mess of half baked ideas.  I could imagine the planners sitting round a boardroom throwing loads of ideas in, and someone just said, “LET’S DO THEM ALL!”  But then it became a bit flabby and disjointed.  I genuinely went in with an open mind, but was a bit disappointed compared to how great the Circus tour sounded great (which had a thematically consistency throughout).

So there you are!  But gig aside, it was also interesting to see how my Canon IXUS 1000HS compact performed in a low light gig scenario. 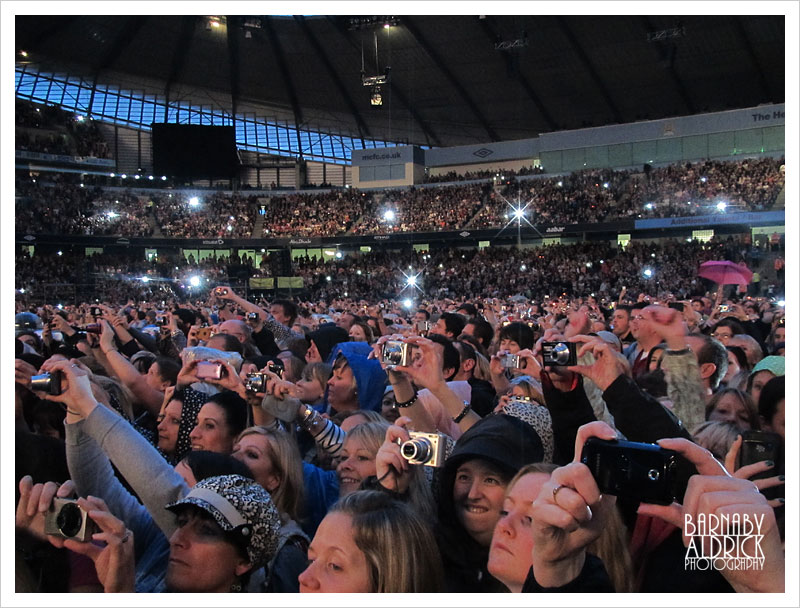 It’s great how popular photography’s become these days, and how everyone wants to photograph everything they do, & to share it online.

Problem is, over half of the folk in the shot above will end up with a bab blurry picture.  Why?  Because they don’t understand how their camera thinks.

So if you’ll indulge, let me talk a bit about how I advise people to photograph a gig on a compact camera… 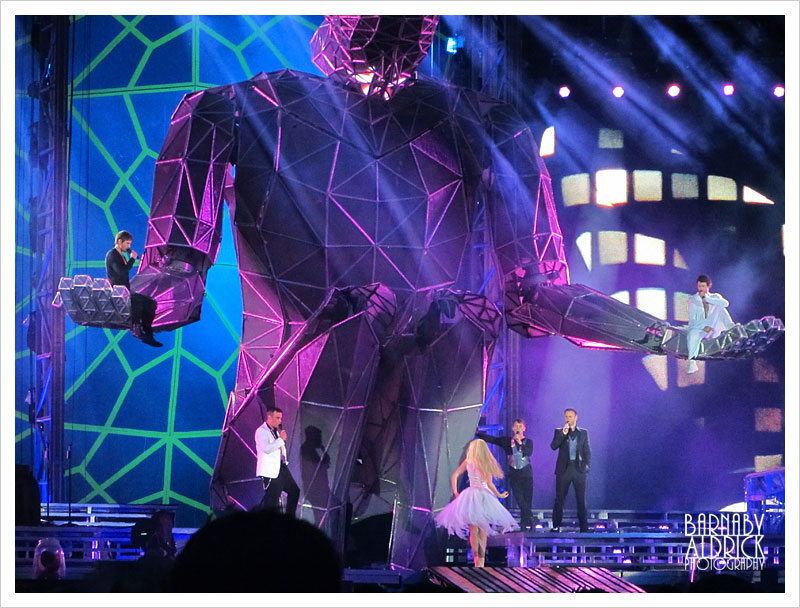 Part of the stage was a giant Robot that moved about, at times acting as a seat for the band to croon to a foxy ballerina.  It really helped to have a 10x zoom on my IXUS really, to get in close on the action.  A long lens is a nice feature on a compact camera, but often the longer lenses don’t go as wide angle.

As with most compact cameras, the IXUS has no manual shooting mode. But it’s still possible to control most of the important variables to get great pics in camera.

When I’m shooting with a compact at a gig like this, you need to realise that when a camera sees darkness it wants to make it brighter to get what it thinks is correct exposure.  Just as how shooting into the sun the camera sees brightness and wants to make the image darker.

In that crowd shot above, you can see all those little flashes going off, but they simply won’t fire enough to light anything.  As well as trying the flash, most cameras also combat dark scenes by dialling in slow shutter speeds, which hand held end up blurry.  Even with a tripod these could get a crisp image, but subject movement then becomes a blur.

So what’s the solution?  Dial up the ISO to make the camera more sensitive to low light?  Yes and no. Higher ISOs lead to grainier images, but faster shutter speeds, but the problem remains that the camera still wants to make the dark scene bright.

Many compact cameras are brimming with sometimes unnecessarily sophisticated features, buried deep in menu’s the general consumer doesn’t often delve.  One feature often found in all but really basic cameras is ‘Exposure Compensation’.  If you ‘dial up’ exposure compensation (toward to the +), it forces the camera to over-expose the image (ie. make it brighter).  If you ‘dial down’ (toward the minu) it tells the camera that whatever exposure it thinks it should be, to make it the amount you dial down darker.  Generally you can dial in up to +2/-2 stops of latitude. 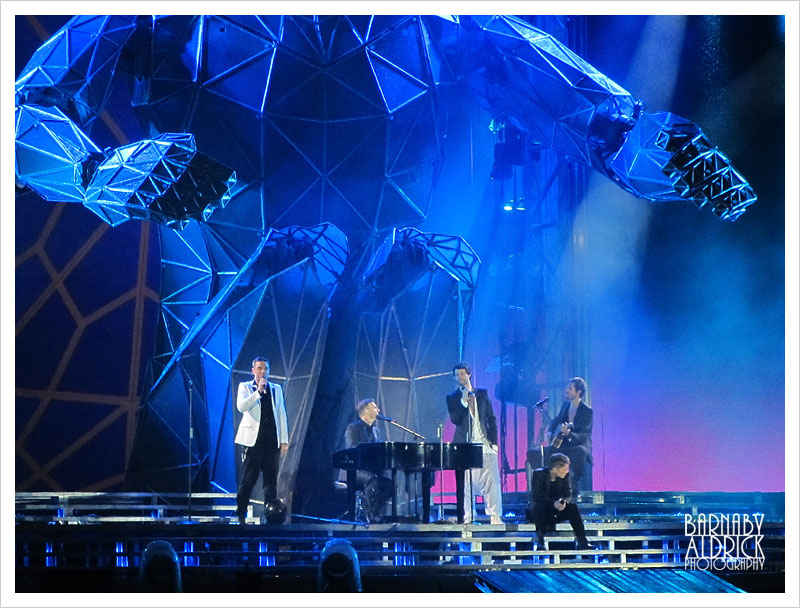 So for a shot like this, (not an award winning image by any stretch), I’ll have dialed down by a full -2 stops, and set my ISO up high to 1600 ISO, turned off the flash and put the camera on burst mode and squeezed three out, in the hope that one would be better than the other two.

[I know that anything over 1600ISO on my compact looks horribly noisy, so I generally don’t crank it any further, so do some tests on your camera]

Any photographic exposure is a combination of ISO, shutter speed and aperture.  As nice as it is to have a fast aperture compact (eg the Canon S90 with it’s f2 lens); but aperture doesn’t make as significant difference in compact cameras as it does on SLRs in creating sharp subjects and blurry backgrounds).  So even though there’s no manual control of all these variables, by setting a high ISO and dialling down the exposure compensation, I’ve I’ve controlled two major variables – sensitivity (which in turn affects usable shutter speeds) and exposure compensation (again, speeding up the shutter speeds to make them more holdable).

I can then press the shutter half way to focus on a bright contrasty part of the scene (good to gain a meter reading and to lock focus onto) and see the shutter speed it chooses on the camera LCD.  If it’s over 1/50th or 1/100th of a second, I know I should be cool to get a sharp image.

Plus, you can always see it on the back, zoom in & check it’s crispy. 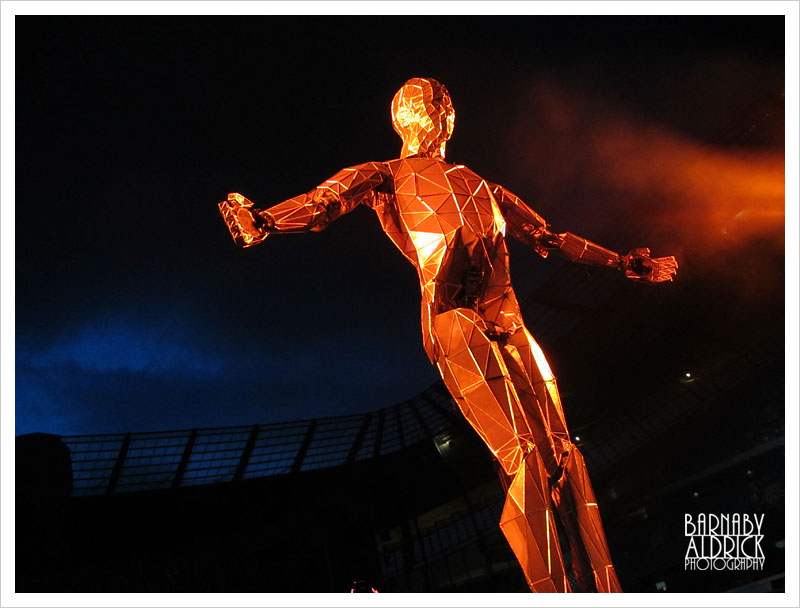 So there you are: bit jumbled, but basically my tips for shooting a gig on a compact are:

> Flash < turn it off.  It’ll do nothing but light the person in front of you’s head anyhoos.

> ISO < dial it up (but generally not to the camera’s max ISO, as it’s generally horribly noisy)

> Exposure Compensation < dial it down as the overall scene darkens

> Burst Mode < set it to take a sequence, and take a few of each, in case one’s blurry.

But at the end of the day (and now for the biggest secret to help people think you’re a good photographer!) only show people your very best images!

No-one want to see the chaff, even if it is a shot of Gary and the boys…